Yep, it’s October 31st and the finale of our second annual participation in the Countdown to Halloween.  It’s been quite a fun month, where we posted 27 new entries dedicated to Halloween candy packaging and marketing.  [Note: During the countdown month we also hit a big milestone with CollectingCandy.com’s 400th post overall.]

For the final entry in our month-long countdown, we’re going to look at a variety of Halloween packaging from Hershey, starting with what I’m calling their “Humorous Tombstone” collection.

When shopping for Halloween candy these days, it can be hit-and-miss with true Halloween-themed packaging mixed in with Autumn or Fall packaging.  So when I saw a Hershey snack-size variety pack containing bars with groovy Halloween-themed tombstone wrappers, it was a must-buy. 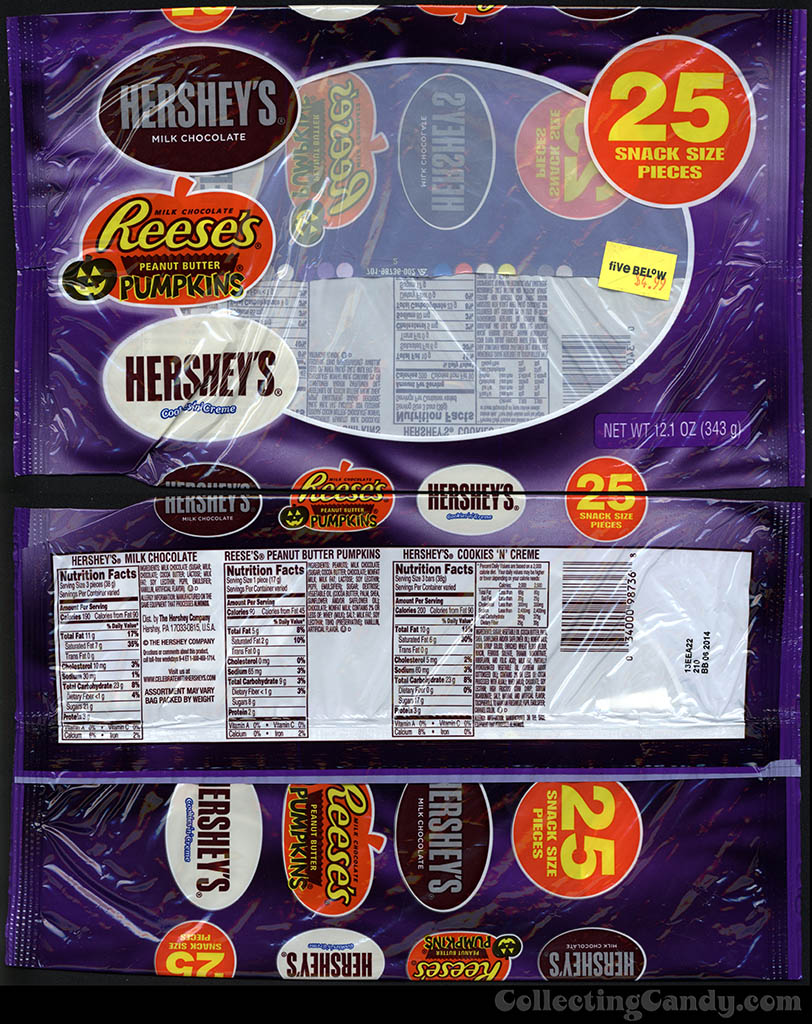 There were five different tombstone wrappers in the assortment as well as a small Reese’s Pumpkin.  Here they are: 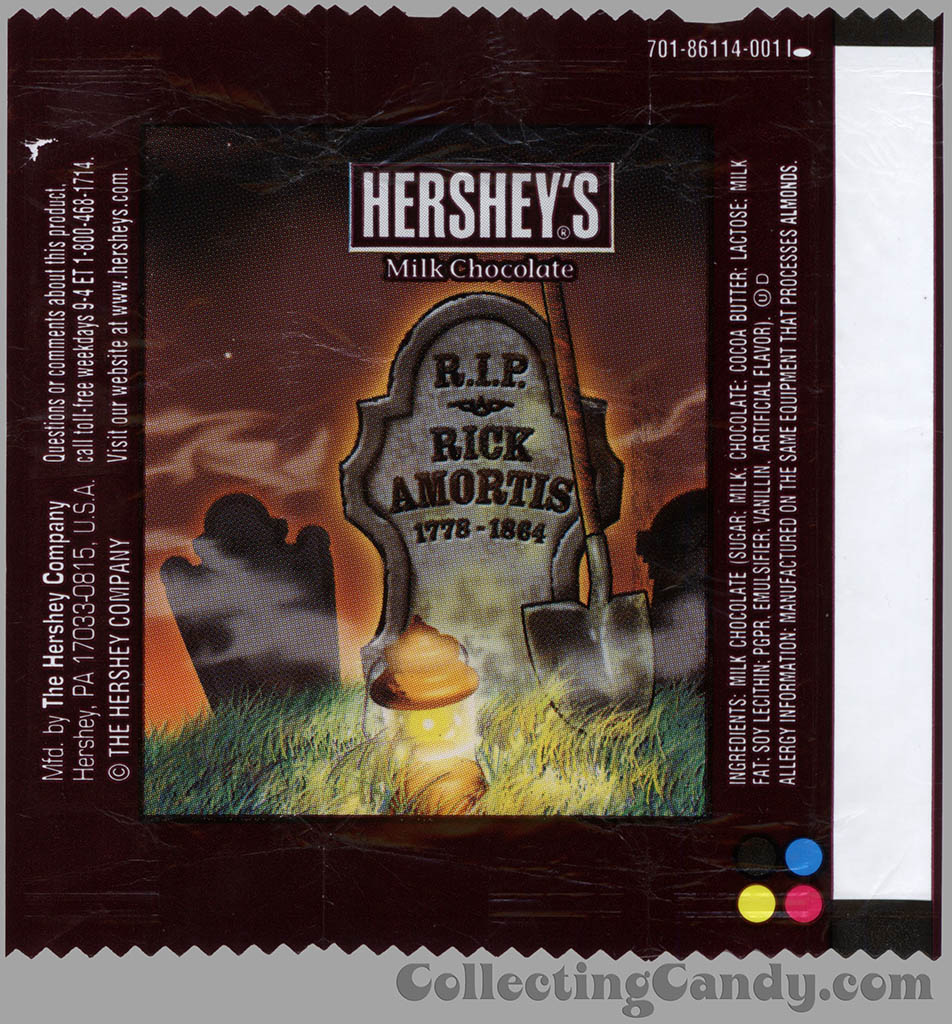 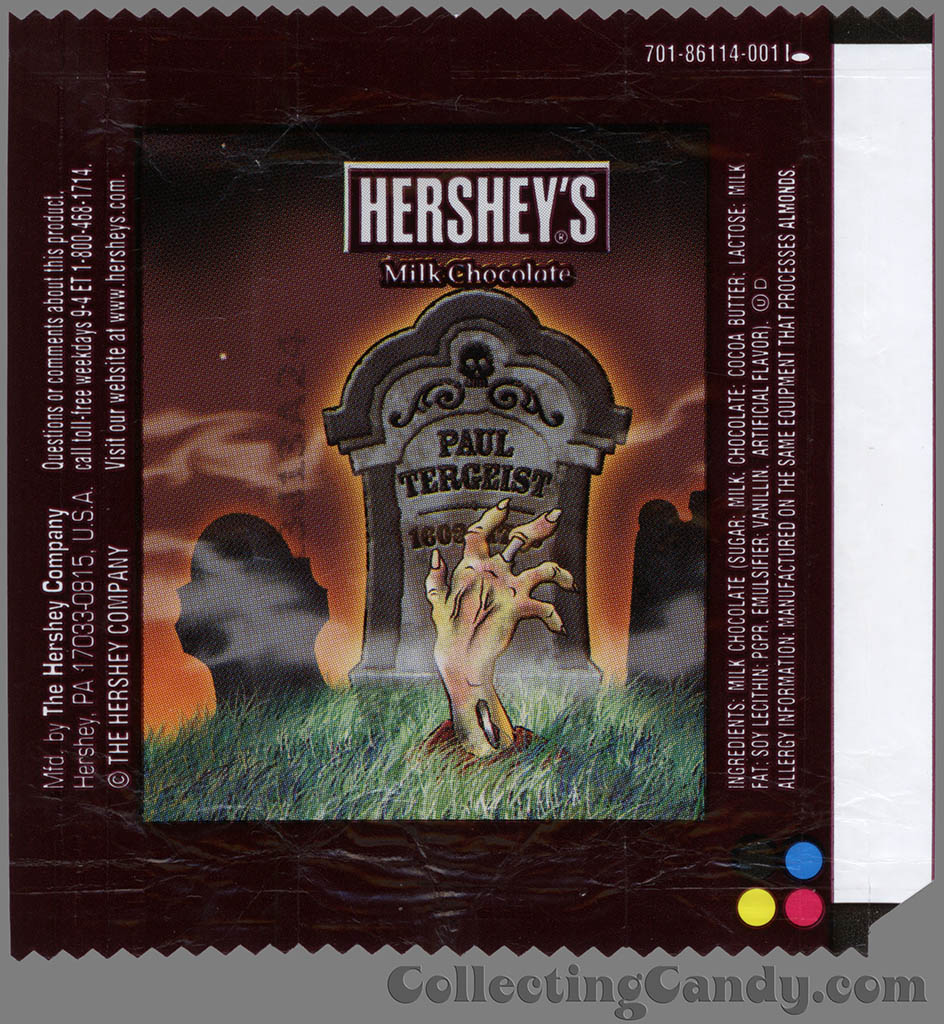 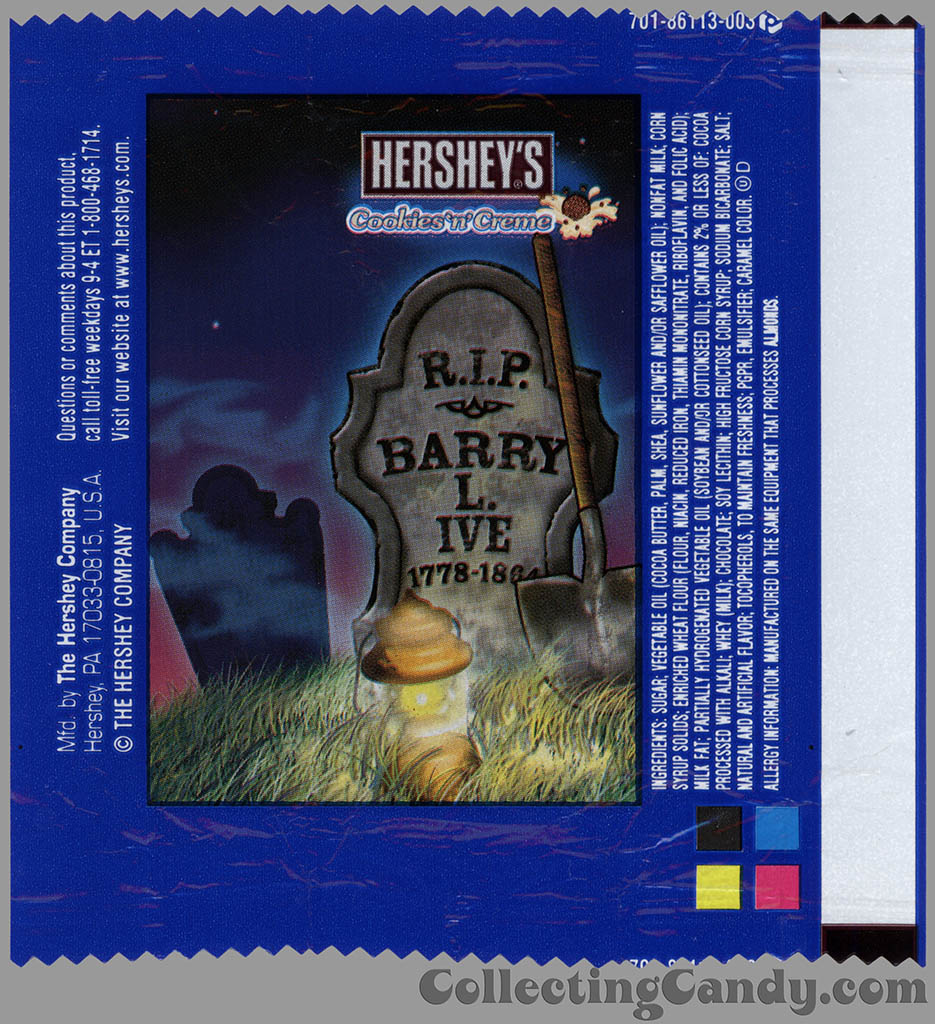 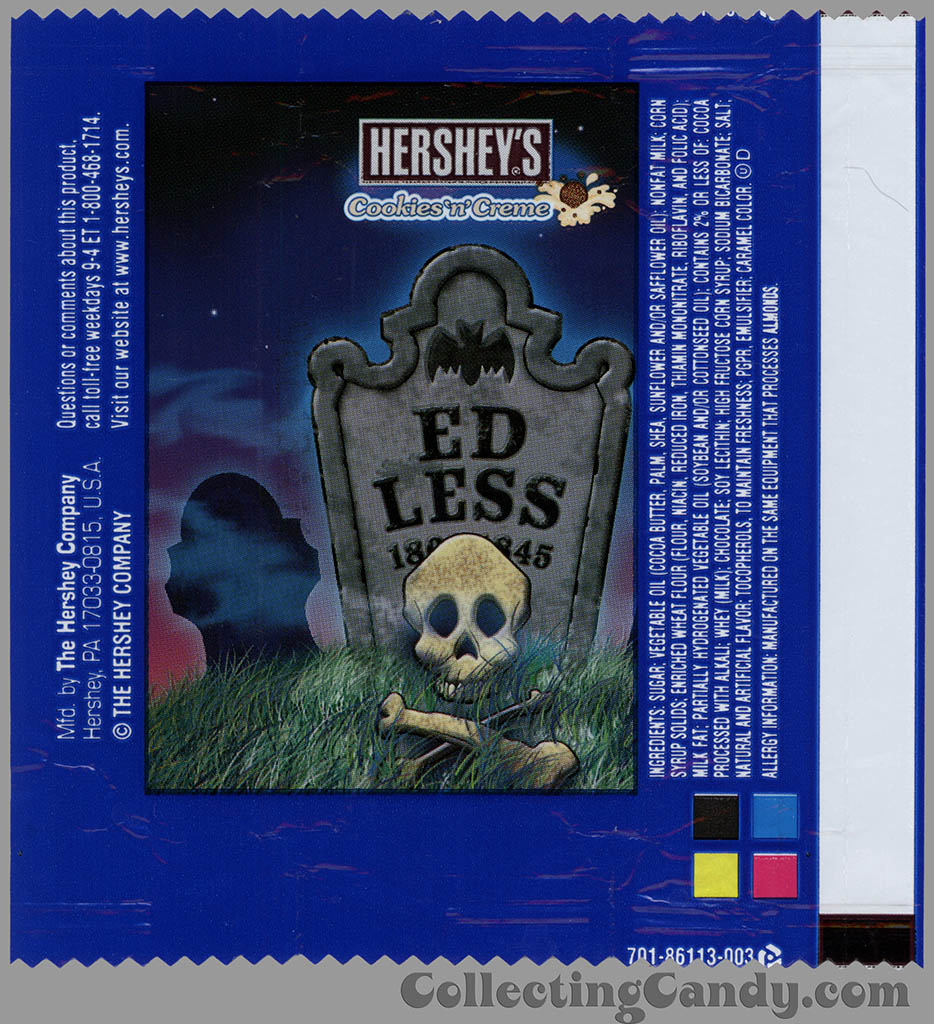 And while I did cover the history of Reese’s Pumpkins earlier this month, I still wanted to include the snack-size wrapper here: 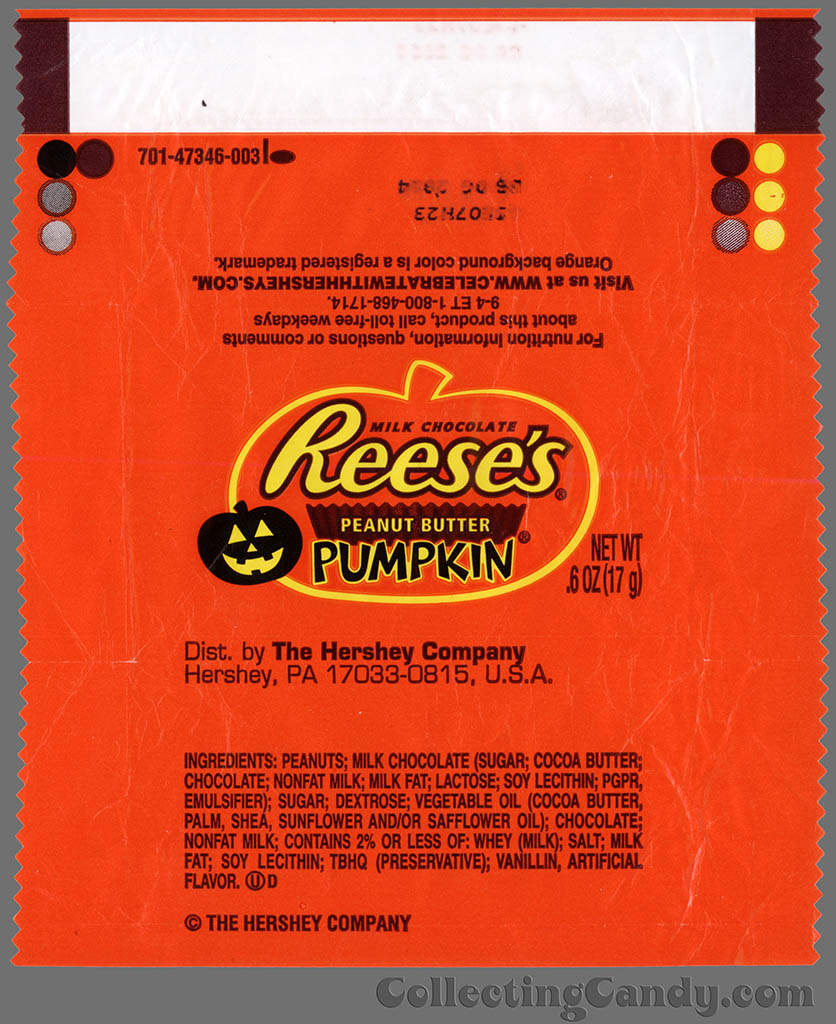 Another fun Hershey Halloween item I found this year was Hershey’s Milk Chocolate Ghost, featuring a wrapper design that I believe is new for 2013.  Love the artwork on this one: 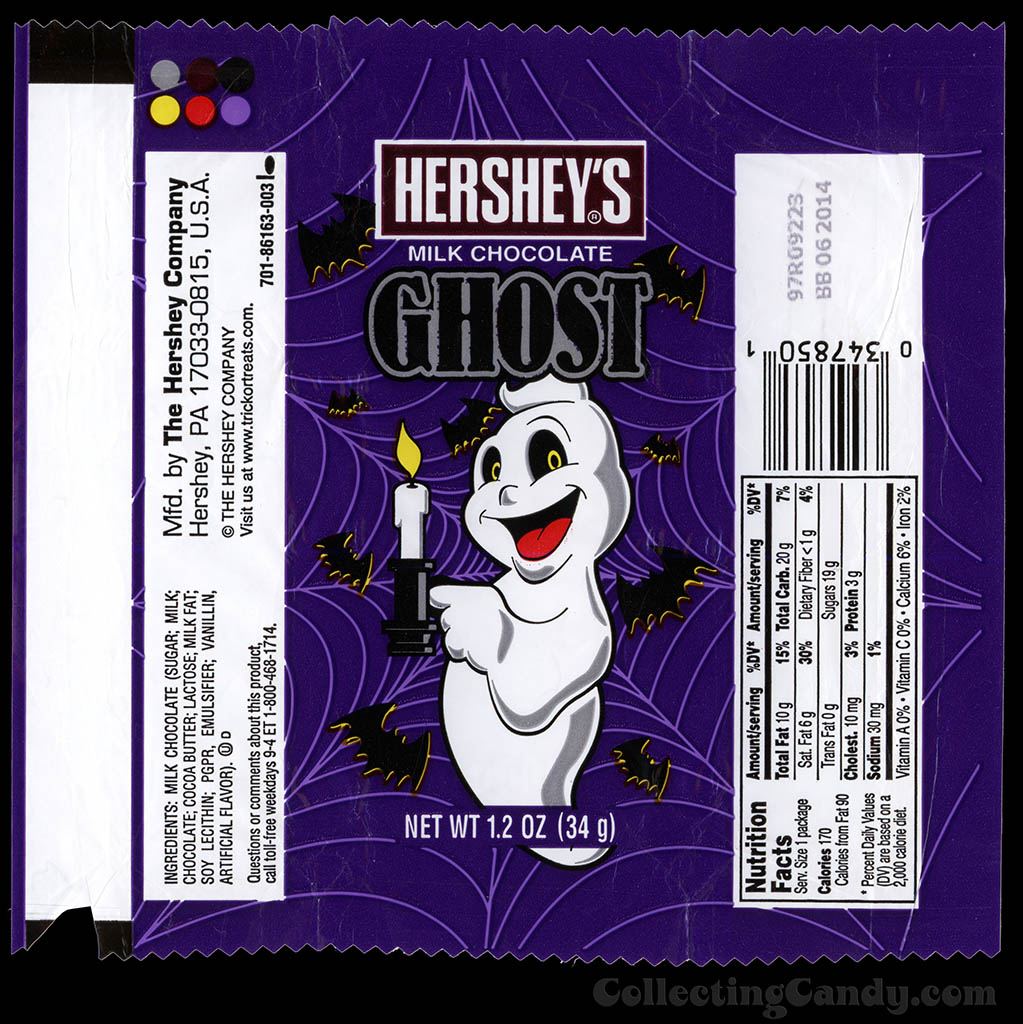 As I mentioned earlier, manufacturers have split their seasonal marketing efforts between products targeted directly at Halloween and those that go broader with an appeal to the entire Autumn time frame.

One product that I could only find in Autumn packaging this year was Hershey’s Minitatures.  Fortunately, I snagged a Halloween-themed edition last year in 2012.  Here it is: 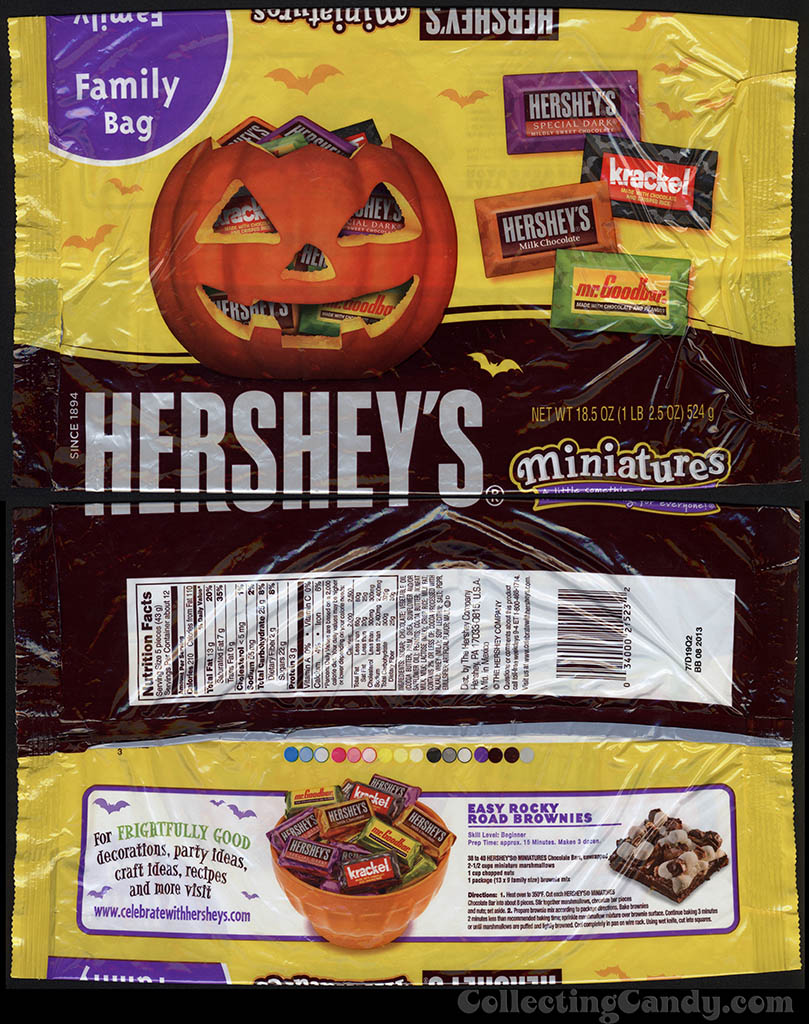 The individual foil wrappers even had little Halloween bats printed on them: 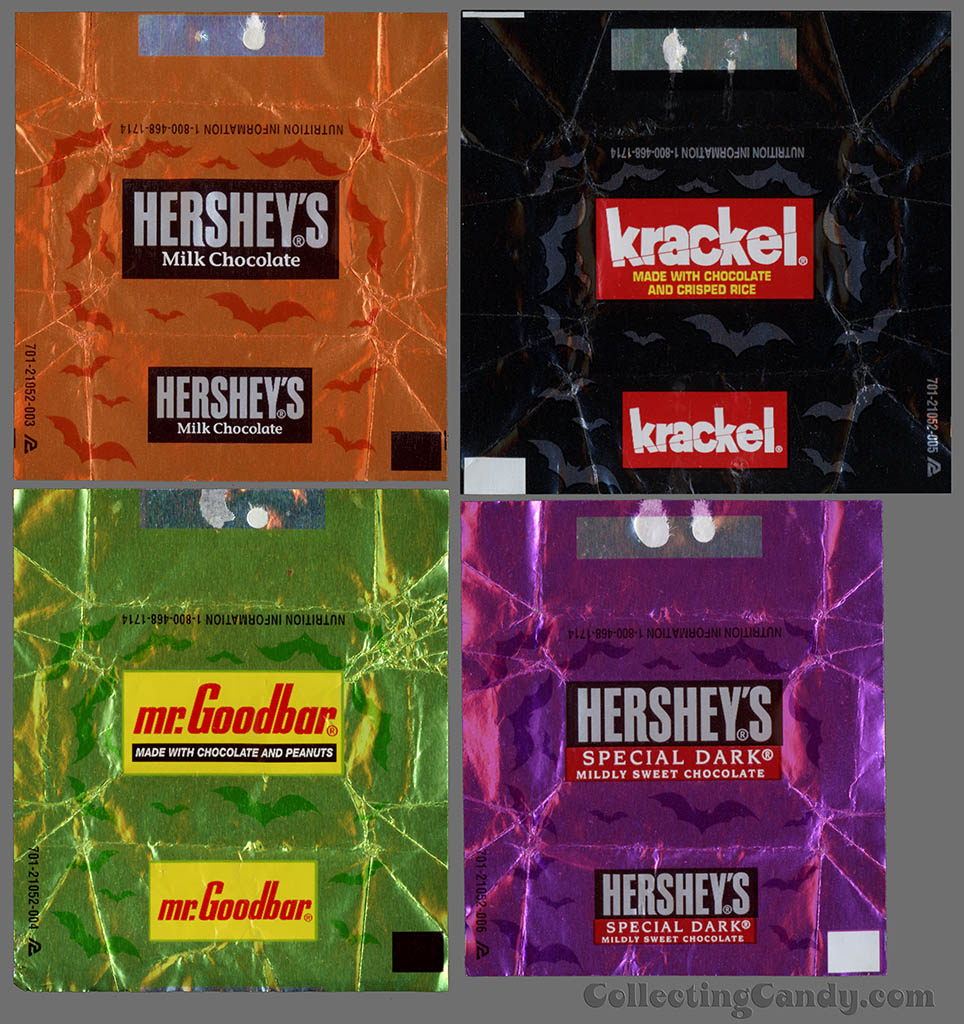 Another group of Halloween Hershey wrappers comes in the form of a quartet of snack-size chocolate bar wrappers from about a decade ago.  Unfortunately I don’t have the outer package these came in, but I am glad to at least be able to share these: 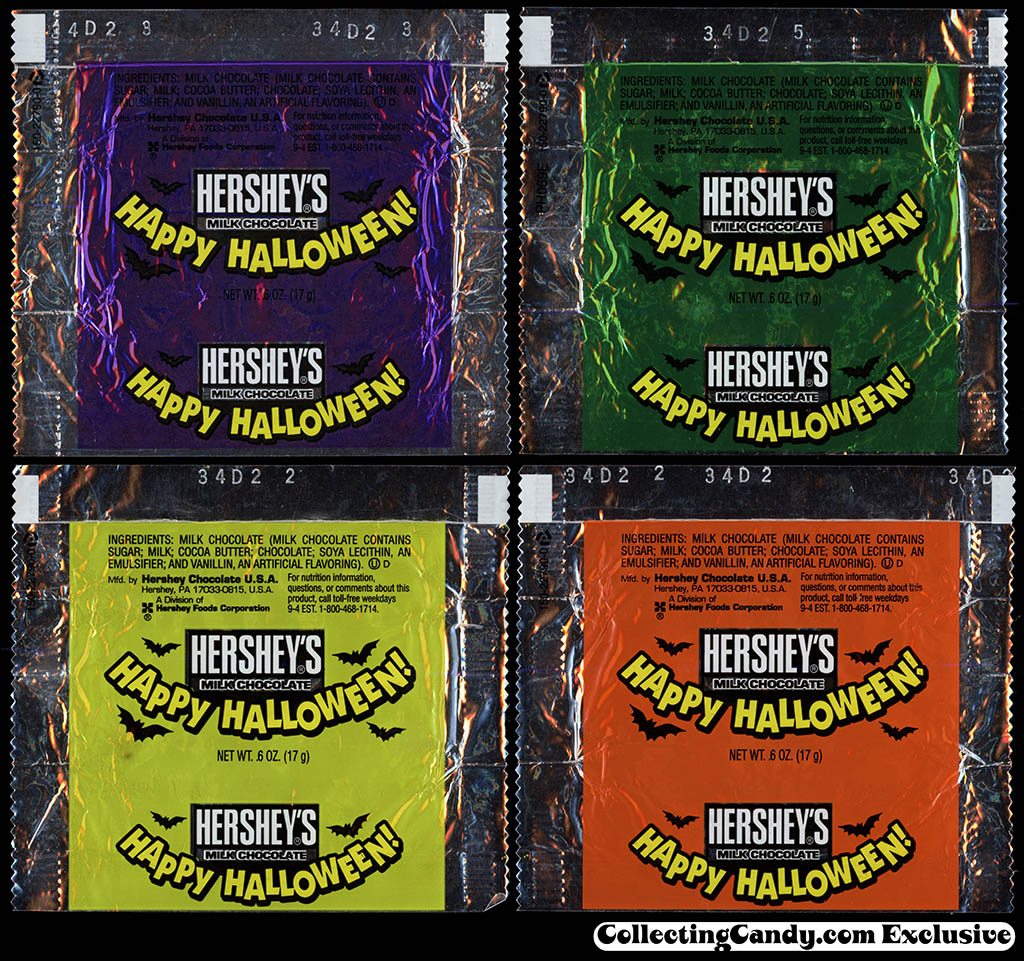 Last up for today we’re going all the way back to the 1970’s with a pair of newspaper clippings of Halloween-targeted coupons from Hershey. 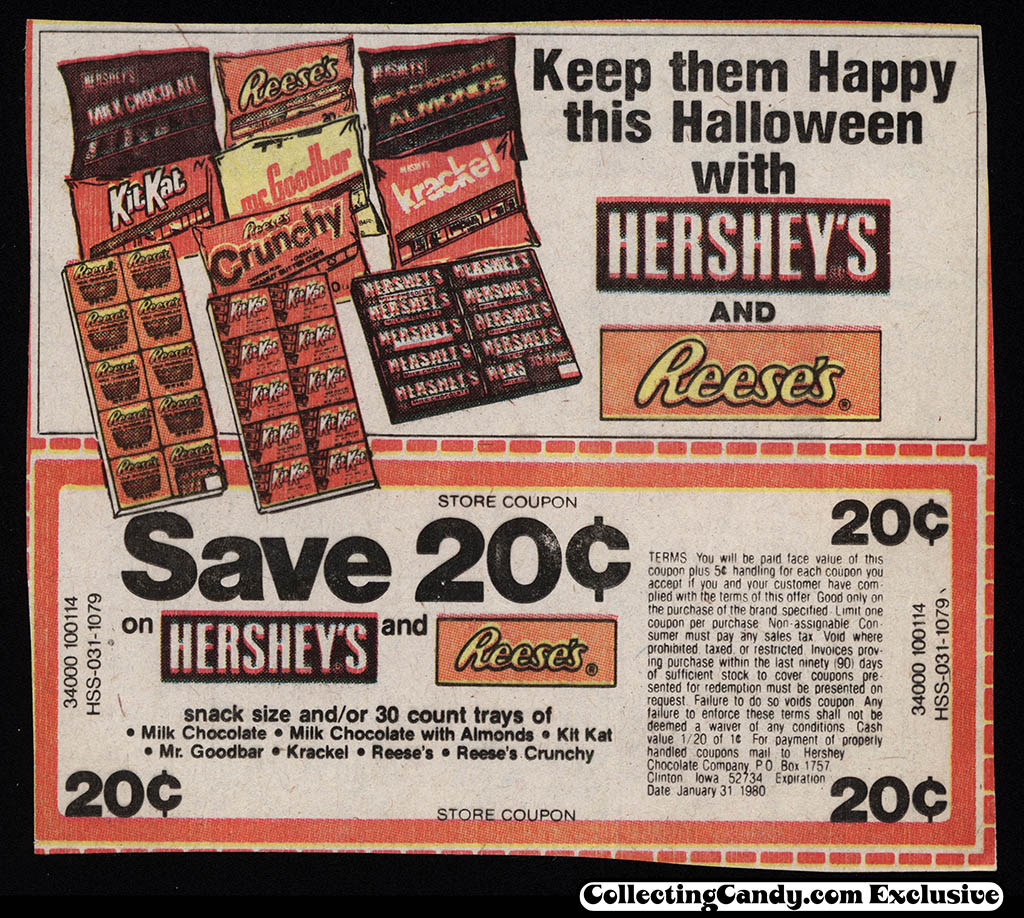 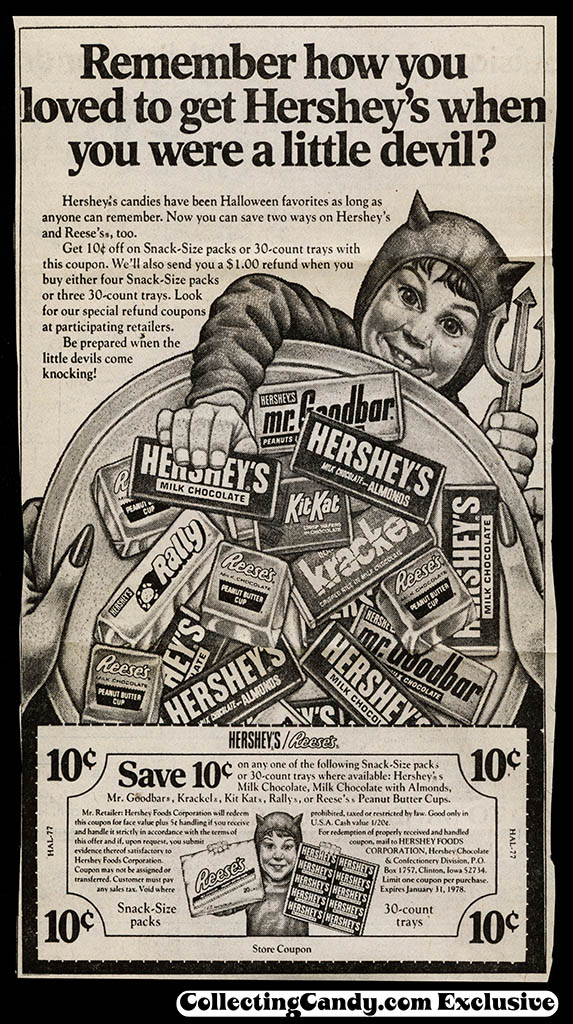 And with that, I would like to wish everyone a happy and fun Halloween evening and I hope you all get the treats (and tricks) you really love.  But if you don’t, make sure you share the less-desirable goodies with friends – because every treat is someone’s favorite!

A New York City based writer, editor and sometimes actor. After spending much of the 1990′s in the comic book business helping tell the stories of Marvel Comics’ X-Men as series editor, he has since split his time between developing his own entertainment properties while still consulting and working on others. Having been described as “the Indiana Jones of lost and forgotten candy”, Jason is one of the country’s premier candy collectors and historians with his discoveries appearing in countless blogs, magazines, newspaper articles, and books. Always happy to share his knowledge and unique perspectives on this colorful part of our popular culture, Jason has consulted with New York’s Museum of Food and Drink and has also been a featured guest on Food Network’s Heavyweights, France’s M6 Capital, and New York’s TheActionRoom.com. My Google Profile+
View all posts by Jason Liebig →
This entry was posted in 1970's, CountdownToHalloween, Halloween, Hershey, Holiday and tagged candy collecting, candy collection, candy collector, candy wrapper collection, candy wrapper collector, collectible, collecting candy, confectionery, confections, Halloween, Halloween candy, Hershey Miniatures, Hershey's, packaging, sweets, vintage candy wrapper, wrapper. Bookmark the permalink.