There are countless mysteries and forgotten favorites in the world of candy and I’ve had the pleasure of documenting many of them right here on this site.   It’s always a thrill to discover these lost treats and fun to shine a light on them for all to see – it’s also a big part of why I enjoy documenting the confectionery segment of our shared pop-cultural past.   That makes today a particularly good one as I’ll be looking at a delightful pair of wrappers you won’t find anywhere else from the early 1970’s and Ralston-Purina’s previously unknown Candy Maker brand.

Though I’d known that Ralston-Purina had dipped its foot into the candy category, I’d never heard of their Candy Maker brand before.   But that changed when a pair of wrappers from the early 70’s surfaced earlier this year.  But before I get to those, I’d like to discuss Ralston-Purina and their more well-known association with candy.

Growing up, I mostly associated the Ralston-Purina Checkerboard with their Purina pet food packaging like Chuck Wagon and Meow Mix. 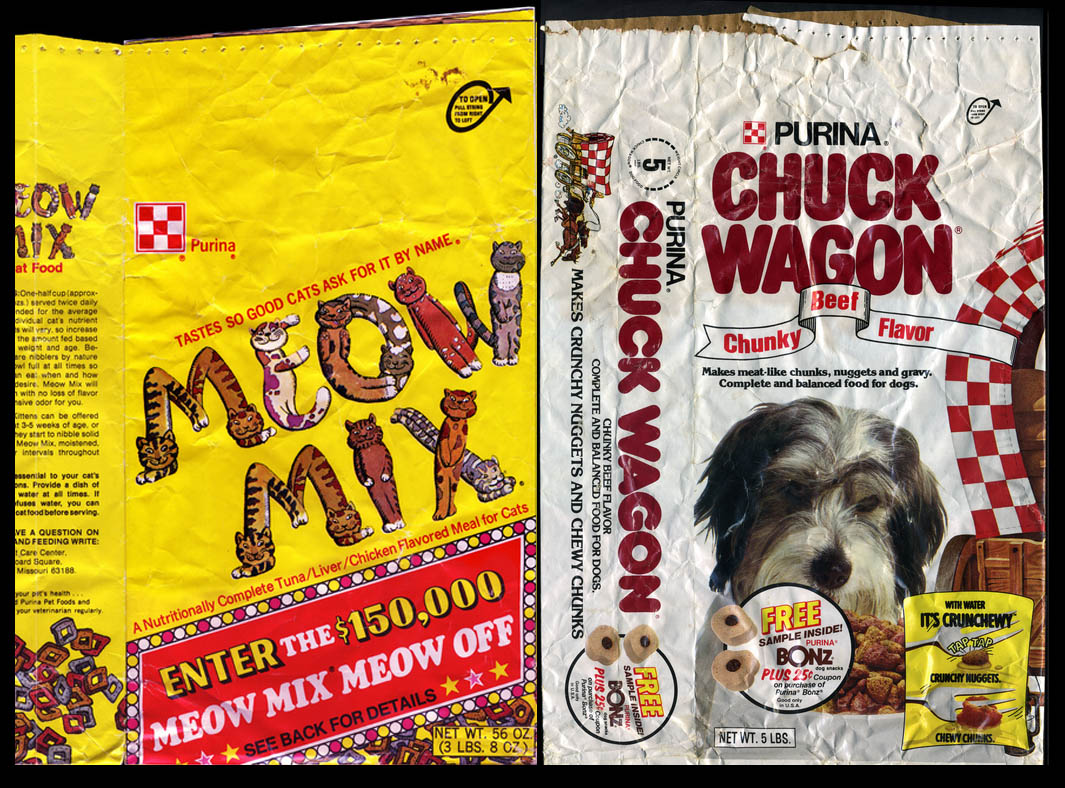 In spite of my early associating of the Checkerboard logo with pet foods, Purina as part of Ralston-Purina had their hands in a broader range of food products for people including one of the great cereal classics: Freakies cereal. 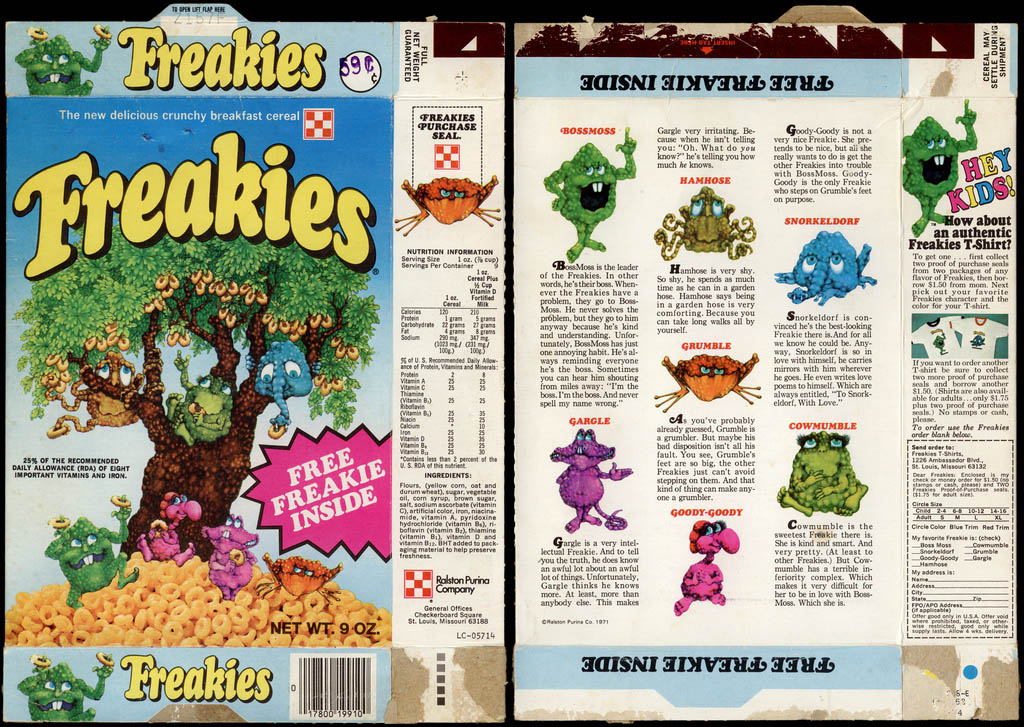 In the realm of candy I only knew them as the company that for a time were owners of the Cardinet Candy company, makers of the classic U-NO bar (still produced by the Annabelle Candy Company.) 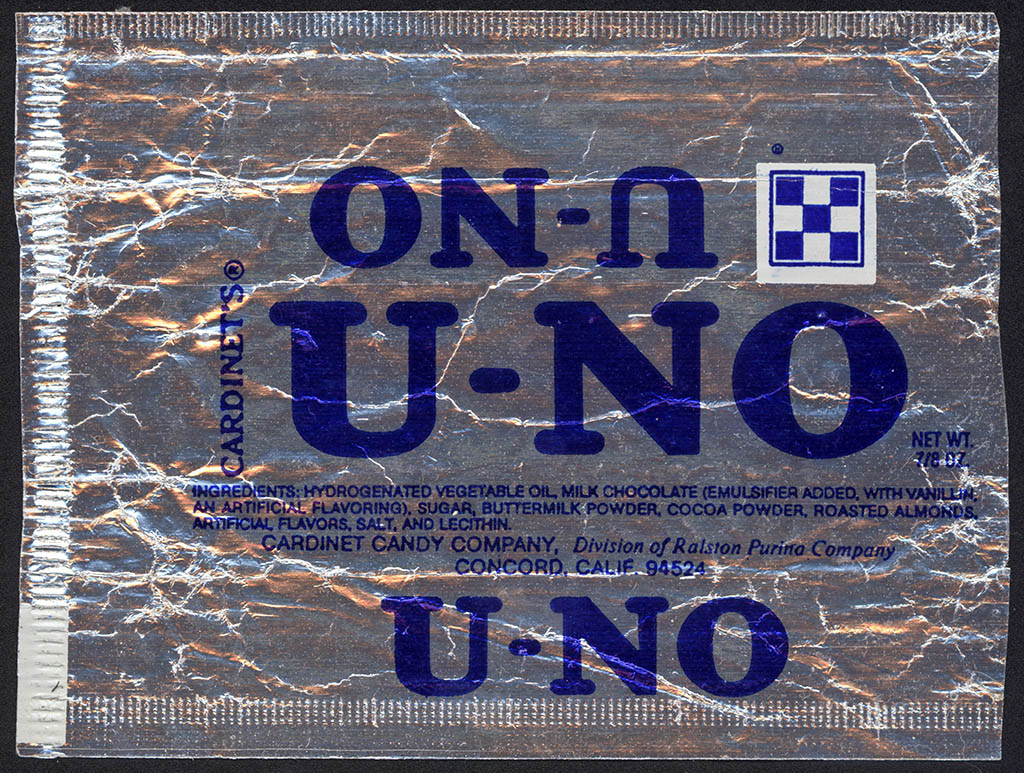 Another classic that was under the checkerboard umbrella during this time was the Baffle Bar: 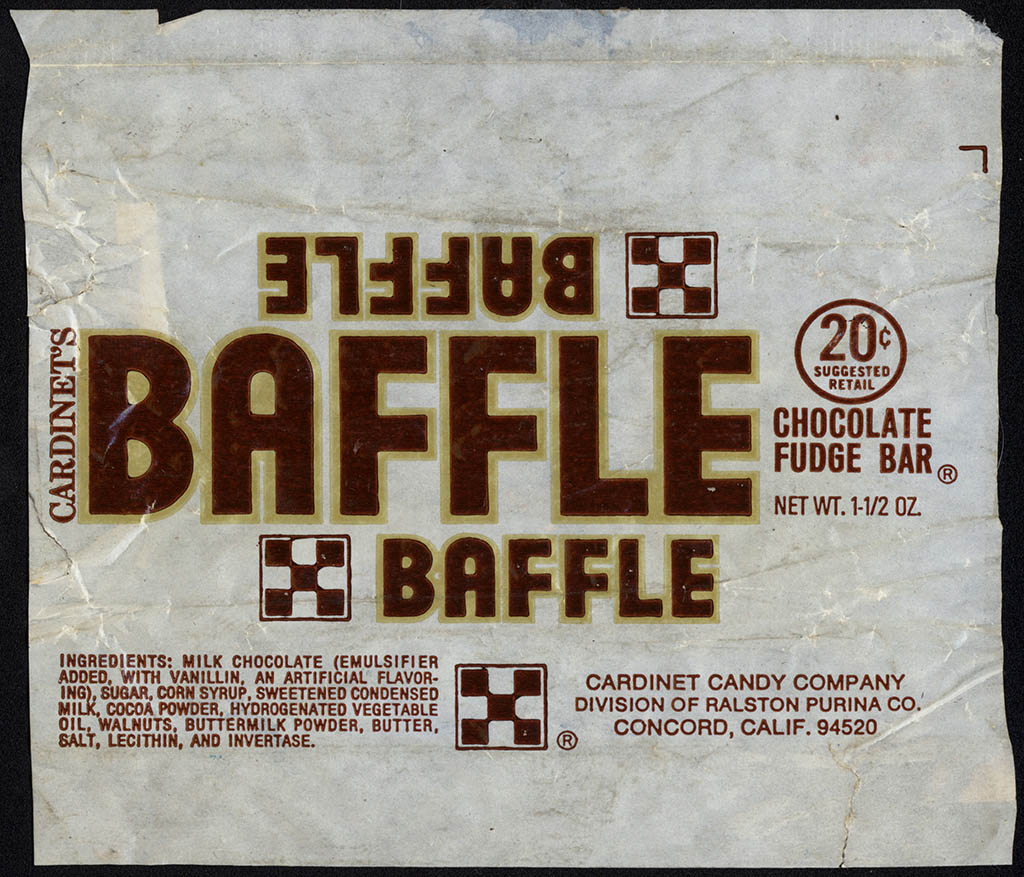 While owners of Cardinet, Ralston-Purina also released a pair of colorfully-named but lesser-known bars whose wrappers are pretty tough to track down in their own right; Smuggler and Hula-Kai. 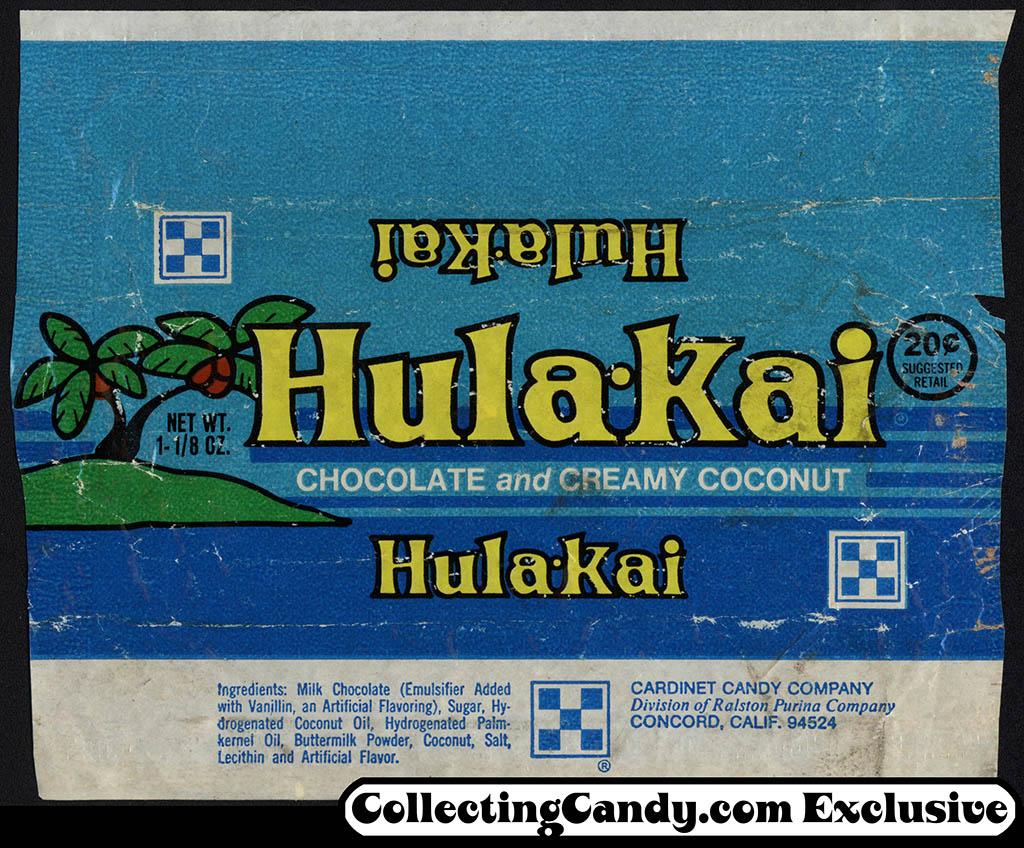 Ralston-Purina would go on to sell their Cardinet Candy holdings to the previously-mentioned Annabelle’s in 1978, ending their brief foray into the candy category.

But as best as I can figure, before Ralston-Purina ever purchased Cardinet, they took a stab at the candy category on their own by creating The Candy Maker brand.

There isn’t much to say about The Candy Maker, as the only evidence that I could find that the brand even existed are the two amazing wrappers that surfaced earlier this year.  So with that in mind, here they are: 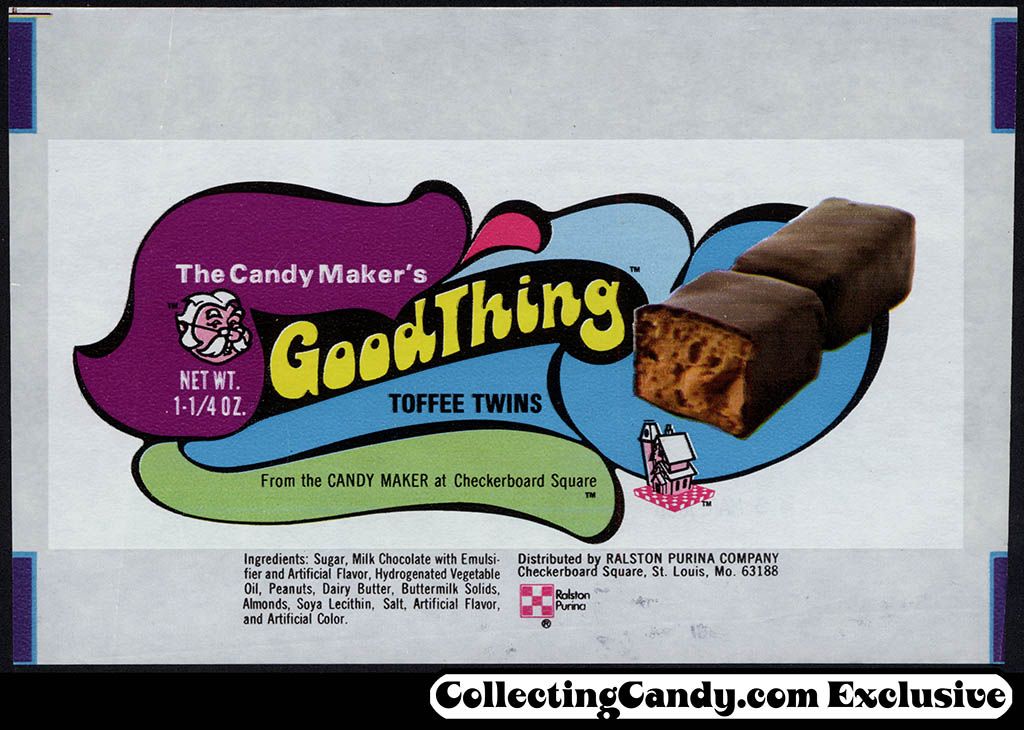 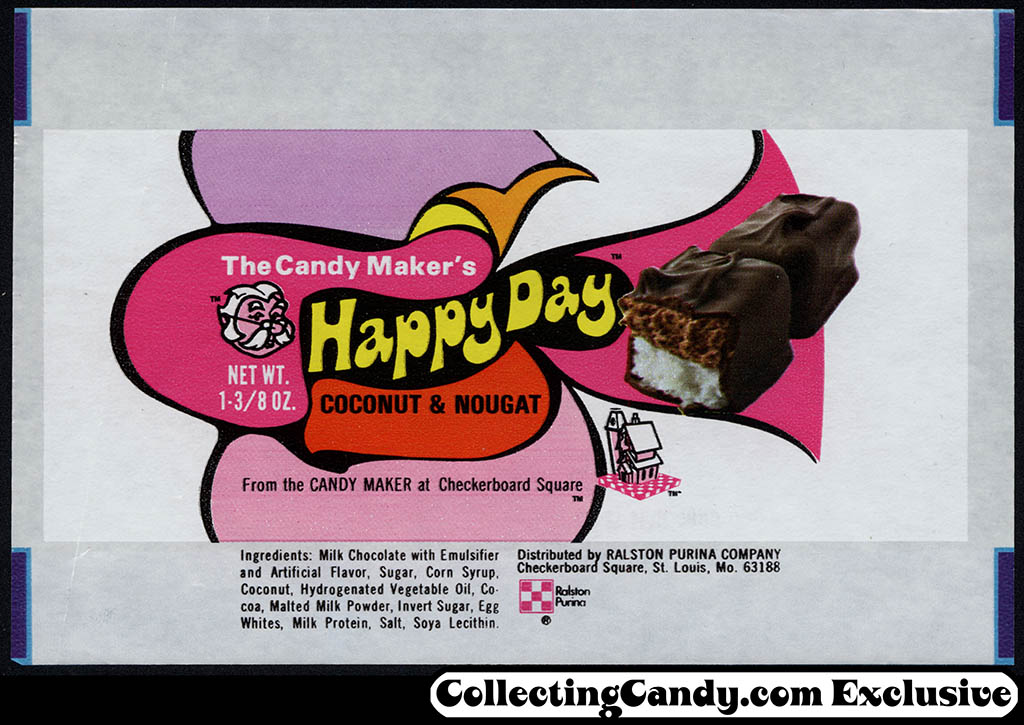 Though it is only speculation, my guess is that The Candy Maker brand fizzled, leading Ralston-Purina to try a different strategy; the acquisition of Cardinet.

Whatever the reality may have been, I’m just glad we have these Candy Maker wrappers to remember this wonderful and previously-forgotten brand.

As I said at the top of today’s post, finds like this are always exciting and discovering these two Candy Maker wrappers ranks as one of my favorite discoveries this year.   I hope you’ve enjoyed seeing them and can appreciate my speculations about them.  If anyone out there happens to remember The Candy Maker brand or any of the bars, I’d love to hear about it!

And that’s everything I’ve got on the mysterious Candy Maker from Checkerboard Square.  See you next time!

A New York City based writer, editor and sometimes actor. After spending much of the 1990′s in the comic book business helping tell the stories of Marvel Comics’ X-Men as series editor, he has since split his time between developing his own entertainment properties while still consulting and working on others. Having been described as “the Indiana Jones of lost and forgotten candy”, Jason is one of the country’s premier candy collectors and historians with his discoveries appearing in countless blogs, magazines, newspaper articles, and books. Always happy to share his knowledge and unique perspectives on this colorful part of our popular culture, Jason has consulted with New York’s Museum of Food and Drink and has also been a featured guest on Food Network’s Heavyweights, France’s M6 Capital, and New York’s TheActionRoom.com. My Google Profile+
View all posts by Jason Liebig →
This entry was posted in 1970's, Chocolate and tagged 1970's candy, 70's candy, candy collecting, candy collection, candy collector, candy wrapper collection, candy wrapper collector, collectible, collecting candy, confectionery, confections, mascot, packaging, Purina, ralston, Ralston-Purina, sweets, vintage candy wrapper, wrapper. Bookmark the permalink.