Though I am a candy wrapper and candy box collector, I’m also a cereal box collector.  Each hobby has it’s own wonderful quirks and qualities, and sometimes the two of those hobbies crossover.

Marketers long-ago figured out that a kid who enjoys sugary cereal in the morning, will certainly enjoy a sugary treat later in the day, so why not entice them before they get out of their pajamas?

Finding a cereal box with a candy or gum offer has always been a double-bonus for me – and it’s why I’ve sometimes went after a cereal box, because the offer was candy-related.  Oh, the fun I have with old cardboard and paper.

Cereal boxes have always been a place for consumers to find coupons on other products, and that certainly has been the case with many of the candy connection.

The oldest candy-related cereal box in my collection is for a brand that lacks much in the way of sugar at all – it’s for Shredded Wheat.  Now, after a breakfast of Shredded Wheat, who could blame anyone for wanting to follow that up with a box of Almond Joy miniatures.  Check out those Peter-Paul Dreams – they don’t make those anymore!

Over half-a-century later, you can still find coupons for candy on cereal boxes. 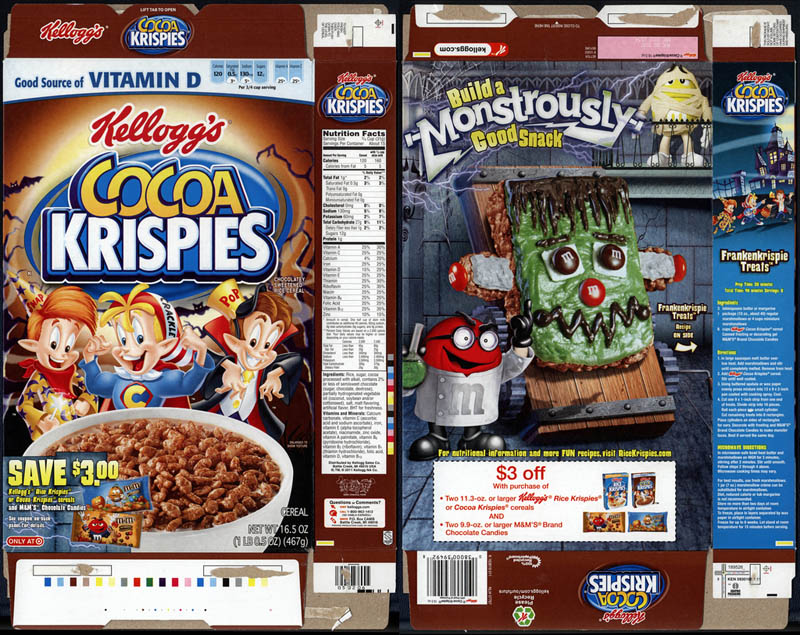 Twenty-five years ago, Cocoa Krispies not only gave you a coupon, but a free package of actual M&M’s.  I wonder how many kids made the right move, and just opened up the pack and poured it right on the cereal? 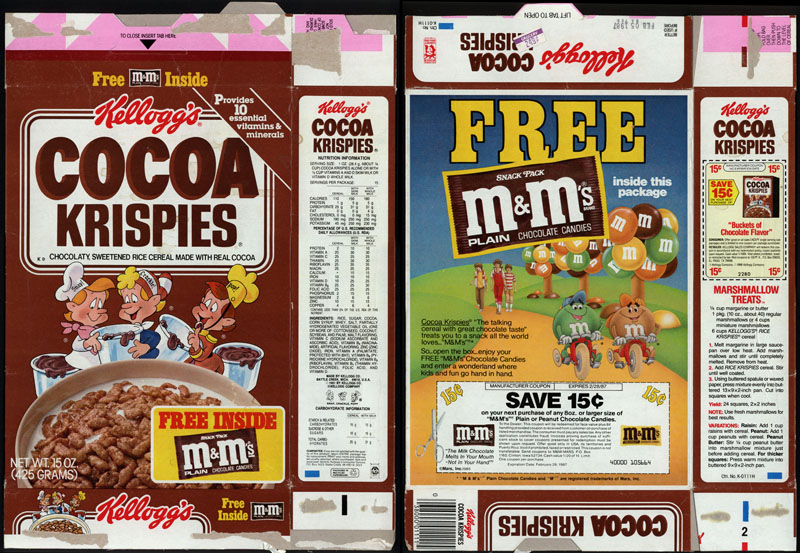 Free inside?  Sounds good to me!  Yes, this was the package deal kids dream of; their favorite cereal, and an offering of some sugary treat.  Could life get any sweeter?

One box that has eluded me as a collector is this “free inside” Cocoa Puffs box, that featured a free box of Just Born’s Mike and Ike candies.  My hunt for this one continues. 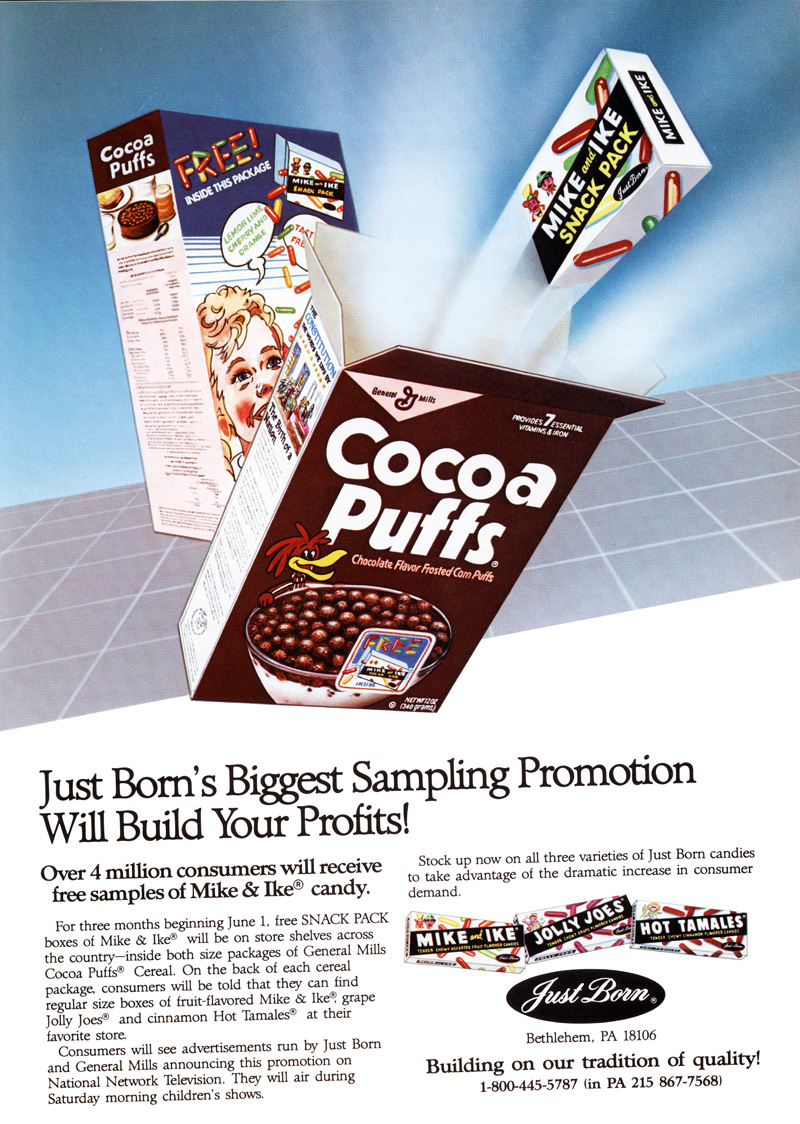 Cocoa Puffs with free Mike and Ike candy - advertisement from 1987

Here’s a few more candy “Free Inside” boxes that I have managed to track down.

Anyone remember Lifesavers Super Holes?  For a brief time, they were inserted into boxes of Trix cereal. 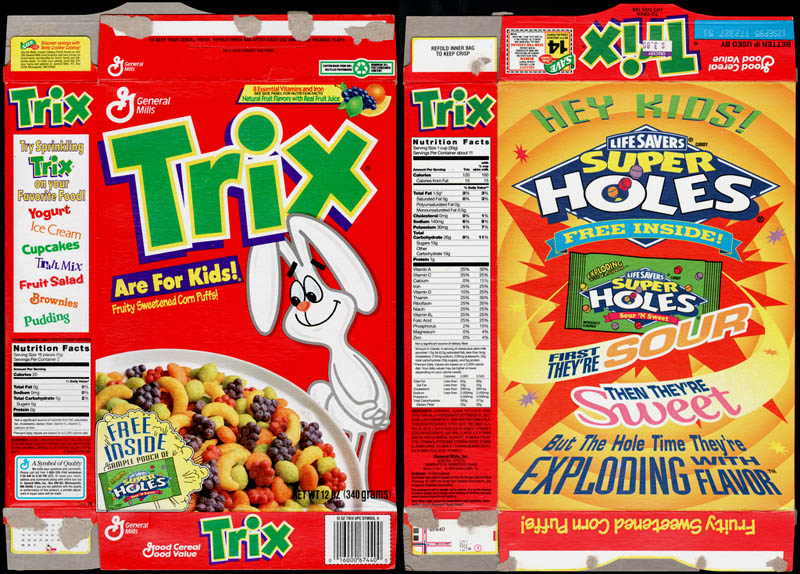 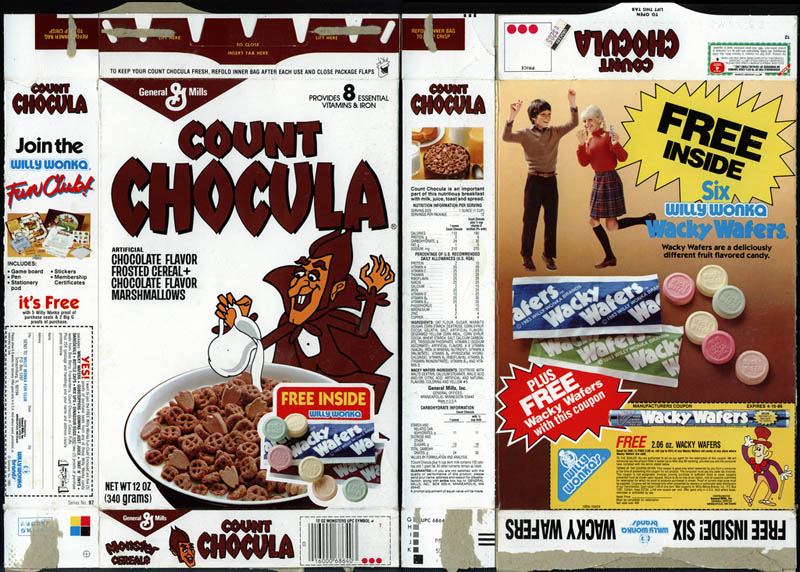 Though Shock Tarts would become part of the Wonka candy family in a few short years, they were not yet Wonka-stuff when they were included in Golden Grahams in 1996. 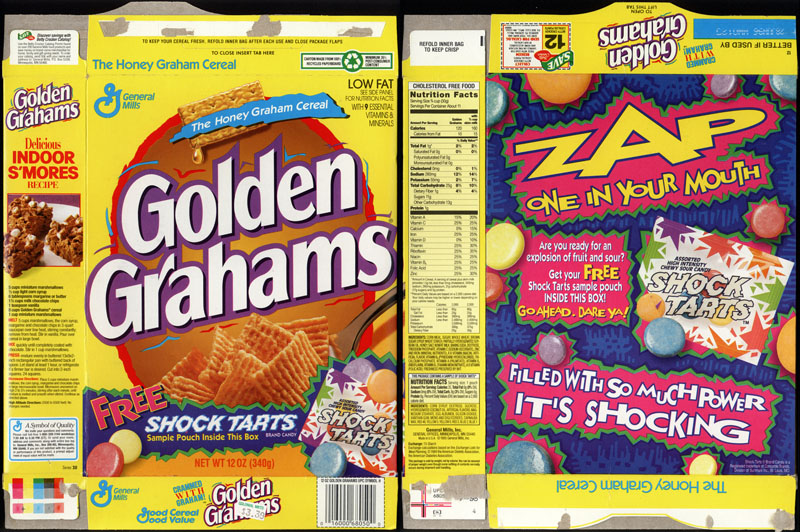 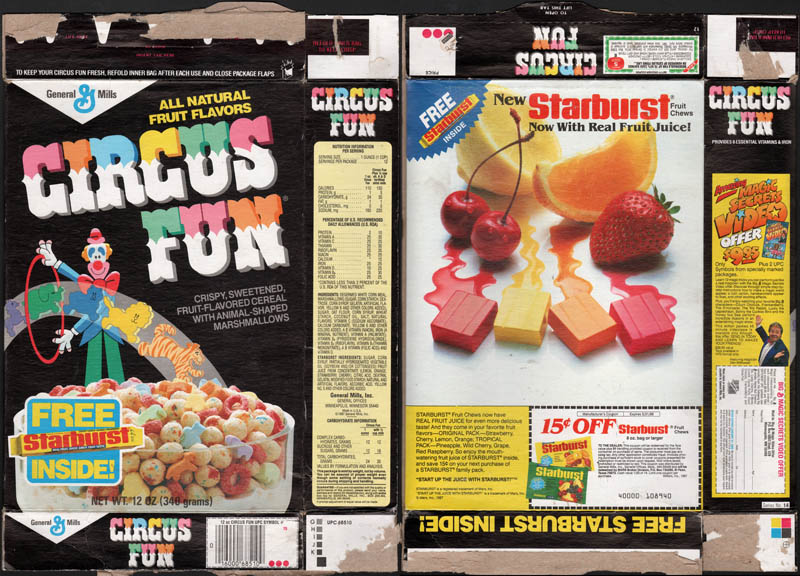 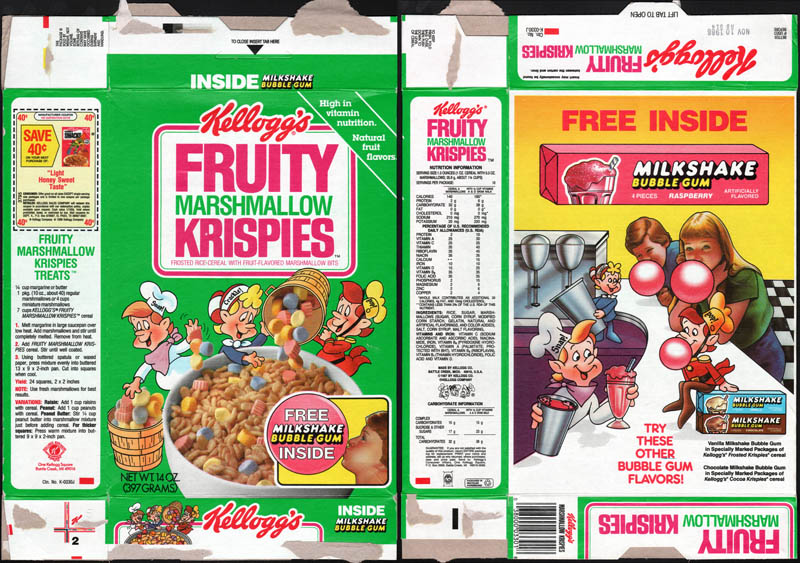 I’ve had the Fruity Marshmallow Krispies box for a few years, and wondered if I might ever come across the gum.  Late last year, I did: 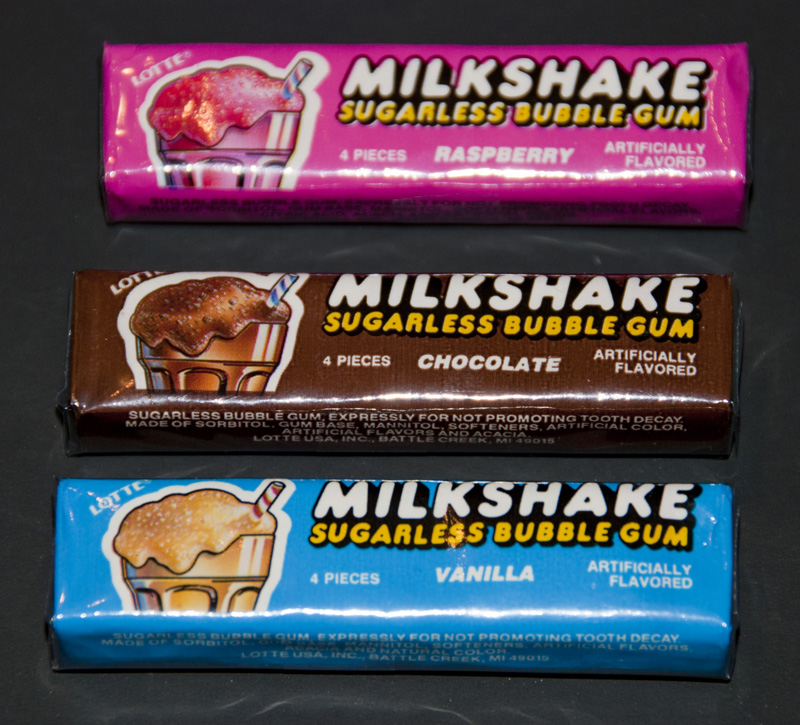 So when it comes to confection and breakfast cereals, every genre got a fair shake.  Here’s a classic from the 80’s. 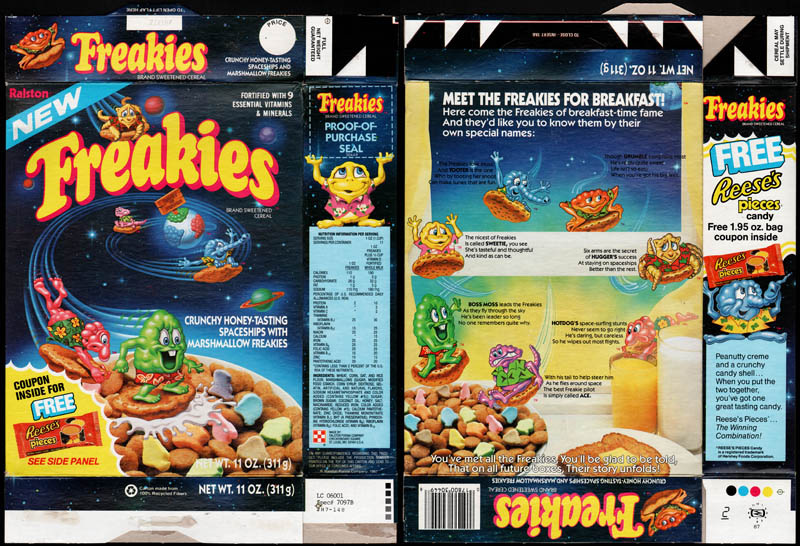 Of course, sometimes a simple tie-in or offer is not enough.  Sometimes, a candy brand is so beloved that a cereal company decides their best move is to license out the whole thing.

What is certainly the most popular and long-lasting of these is Reese’s Puffs. 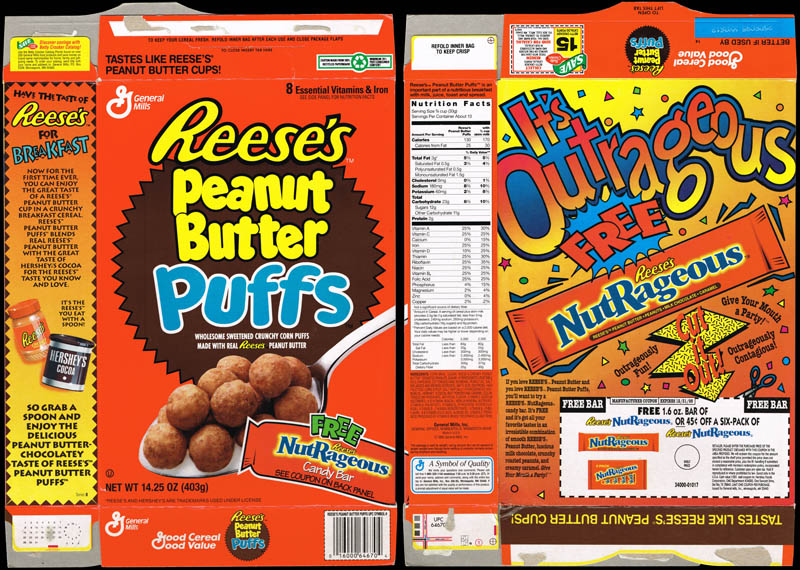 In the case of Nerds cereal, Ralston went so far as to duplicate the two-flavor box design that the candy offered.  So you’d get two flavors of Nerds cereal out of one box. 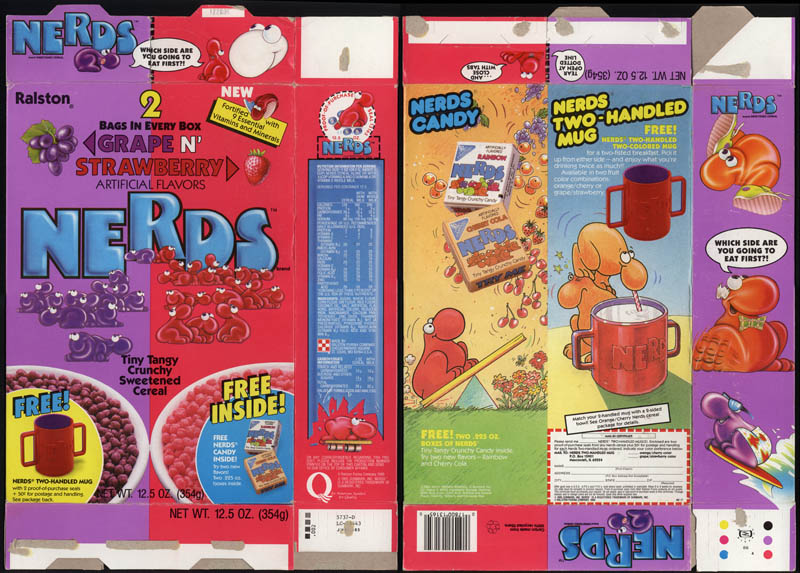 The UK has gotten into the game too, as I recently found during a trip there. 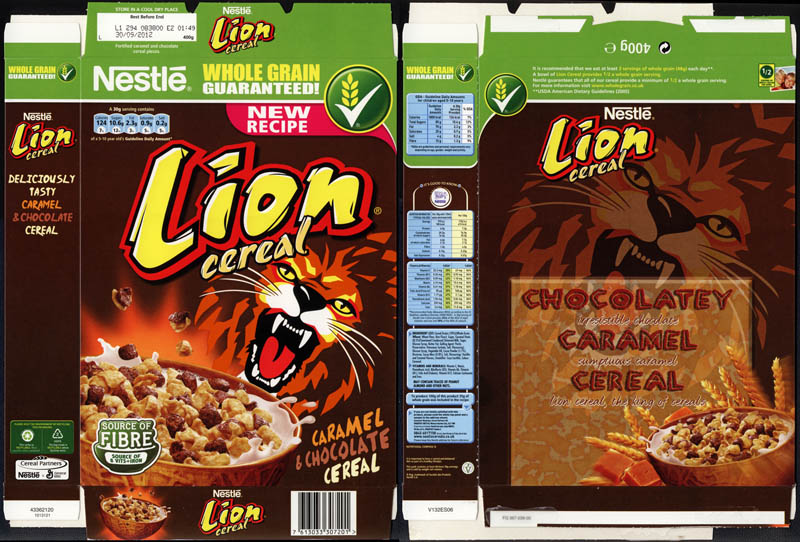 And since most of my USA readers wouldn’t be familiar with the brand, here’s a modern Lion bar wrapper. 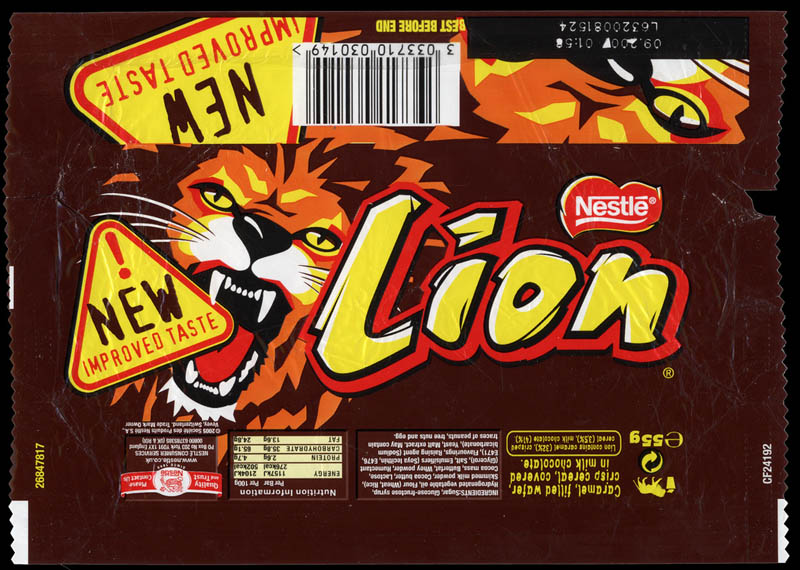 As you can see, candy to cereal crossovers are not that uncommon, and can be a perfect way to tie two products together.  But sometimes it goes the other way, and the cereal makes its way into candy.

Candy made out of cereal?

One of the first examples of this I encountered were Cap’n Crunch bars:

Now, someone might fairly say, “But wait, Cap’n Crunch bars aren’t really a candy – they’re a snack!”, and technically they’d be correct.  But they’re not here to stop me, so I’m leaving it in.

Rice Krispies Treats is another cereal-candy-snack worth mentioning, and they really are the most profound of the cereals-into-candy.  So I have to include them. They almost transcend into their own category. 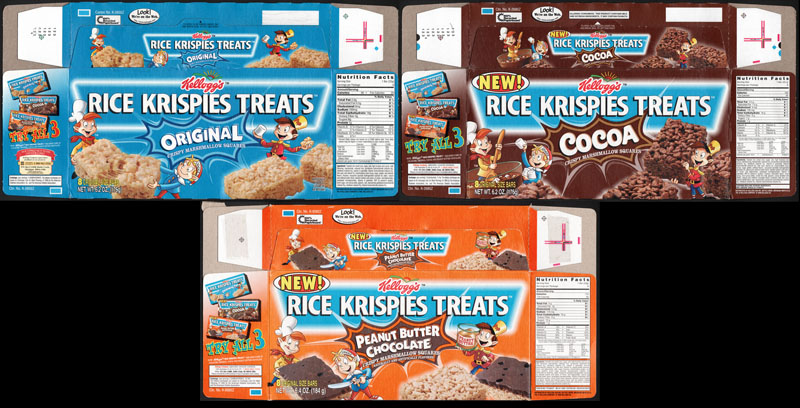 But not content to simply turn a cereal into snack – these then made their way back into cereal form. 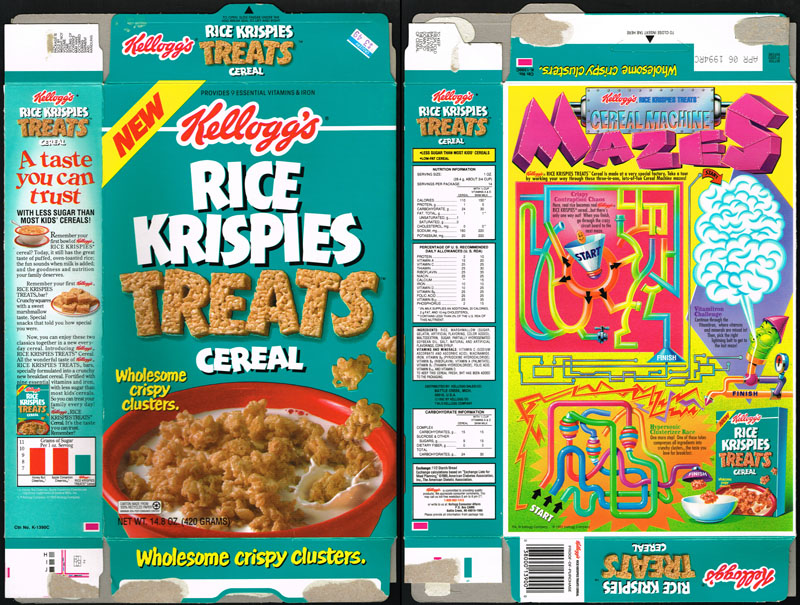 One of the more unusual cereal-to-candy crossover items I’ve encountered has to be this one, from a line of Kellogg’s Tony the Tiger branded snack and candy items, sold in Brazil in the late 70’s.  When I saw it, I knew I had to add it to my collection. 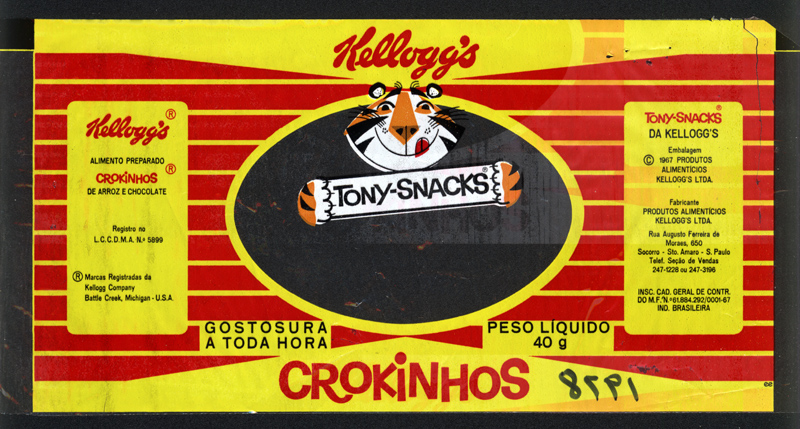 So that’s a lot of crossover material.  In the history of candy though, few relationships were probably ever as close as that of the very first candy bars branded with the Wonka name.  You see, back in 1971, when the Wonka brand of candy bars first appeared, they were produced by Quaker – the folks who also made Cap’n Crunch.  Launching the candy line out of their promotional efforts that also tied into the feature film, few candy-and-cereal relationships could ever be considered so intertwined as this one.  Eventually I’m going to return to this topic to do an in-depth history on the Wonka candy brand. 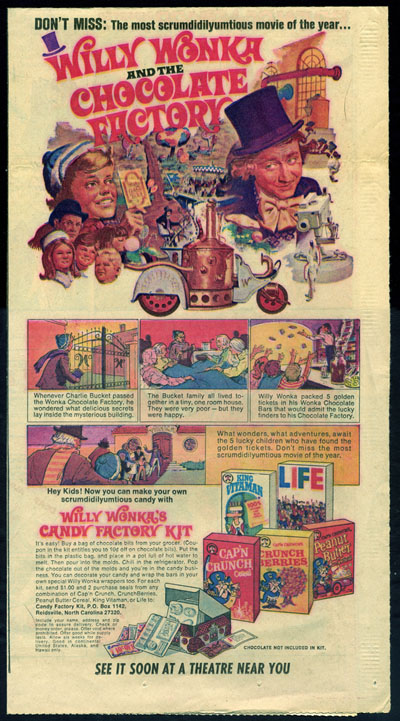 Here’s an early example of a Wonka candy bar that was produced by Quaker, the tongue-twister-titled Scrumdidilyumptious . 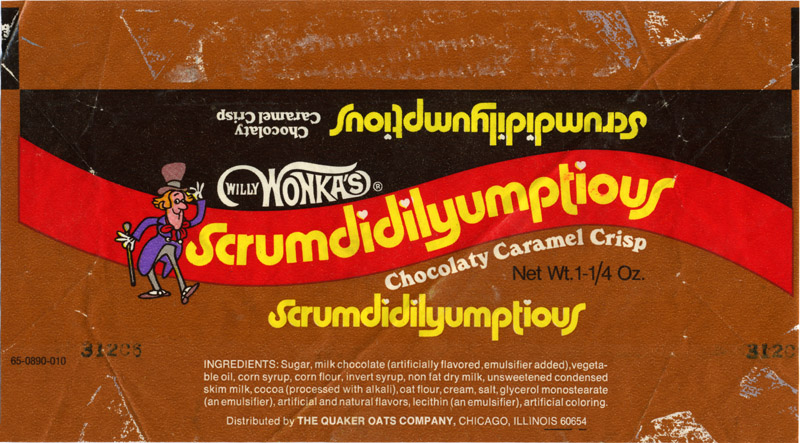 And that’s the whole of what I’ve got today on the wonderful friendship between cereal and candy.  Well, I’ve got one more.  Here are a trio of Wacky Packages like candy boxes – each a parody of a major cereal brand.  From the Swell gum company, likely sold during the early 80’s. 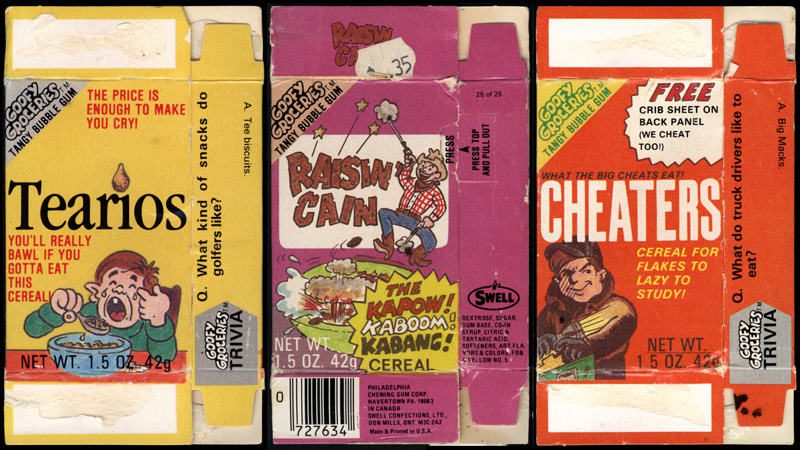 Before I sign off today, and while I’m on the cereal topic, I’d like to plug my pal Topher’s new book on cereal – “The Great American Cereal Book: How Breakfast Got Its Crunch”, by Martin Gitlin and Topher Ellis. If you have a love of cereal – be sure to check it out.

A New York City based writer, editor and sometimes actor. After spending much of the 1990′s in the comic book business helping tell the stories of Marvel Comics’ X-Men as series editor, he has since split his time between developing his own entertainment properties while still consulting and working on others. Having been described as “the Indiana Jones of lost and forgotten candy”, Jason is one of the country’s premier candy collectors and historians with his discoveries appearing in countless blogs, magazines, newspaper articles, and books. Always happy to share his knowledge and unique perspectives on this colorful part of our popular culture, Jason has consulted with New York’s Museum of Food and Drink and has also been a featured guest on Food Network’s Heavyweights, France’s M6 Capital, and New York’s TheActionRoom.com. My Google Profile+
View all posts by Jason Liebig →
This entry was posted in 1970's, 1980's, Bubble Gum, M&M's and tagged 1970's, 1980's, 70's, 80's, breakfast, bubblegum, candy, cereal, chocolate, collectible, collecting, gum, mascot, retro, sweets, vintage, wrapper. Bookmark the permalink.

10 Responses to Cereal and Candy: Best of Breakfast Friends