Maximum Marathon Part 2: The Commercials! Plus a World Premiere Video!

Welcome back to part two in our three day Maximum Marathon coverage!  Today we’re going to focus our gaze upon the clever series of 1970’s television commercials that were created to promote the Marathon bar as well as the square-jawed spokesman that starred in them, Marathon John.

Played with chiseled good looks and an easy confidence by Patrick Wayne, Marathon John was the perfect foil for the overly “quick” characters he would encounter.  [Though Patrick Wayne might be best known as the son of Hollywood legend John Wayne, genre film fans may remember him in the lead role as Sinbad in Ray Harryhausen’s Sinbad and the Eye of the Tiger.]

Marathon John as cowboy candy bar mascot was created and launched alongside the bar itself.   He even appeared in an early candy industry trade ad introducing the bar to candy buyers and distributors: 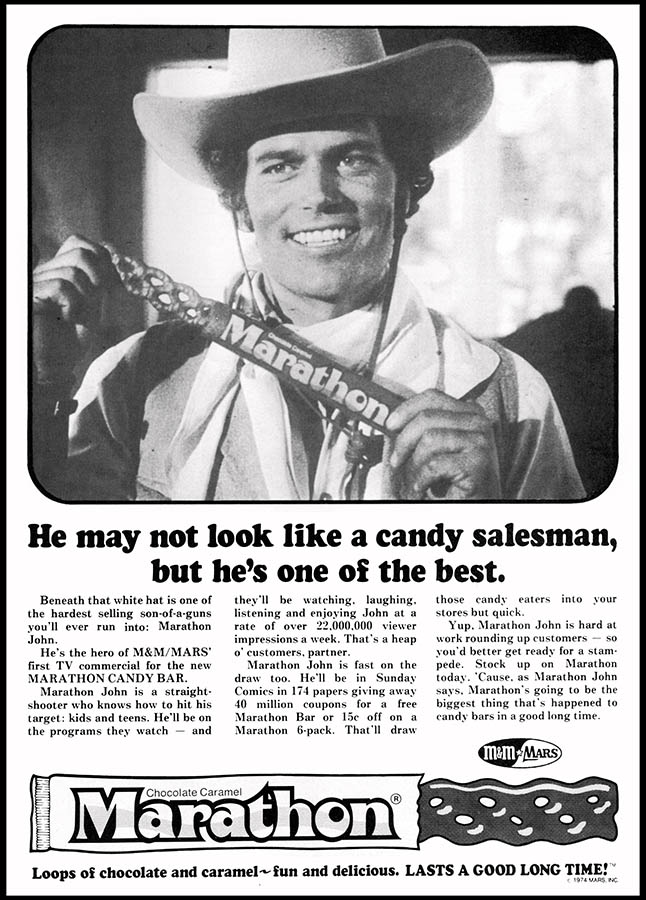 America’s earliest impression of Marathon John came through his appearance in the   “Quick Carl” commercial spot:

Beyond the commercials, the Marathon John-as-friendly-cowboy character was also used in print advertisements.  Here’s an early coupon that was good for a free bar:

That same artwork would be used again a few years later, though this time the coupon was only good for a discount, not a freebie:

Of course the most recognizable face of the brand was that of Patrick Wayne’s Marathon John seen in the television commercials, and there were a few.

Here’s one with Marathon John swinging onto a pirate ship, and meeting up with Captain Quick [Note: Captain Quick in this next spot is played by none other than Roger C. Carmel – Star Trek’s Harcourt “Harry” Fenton Mudd]:

And finally another commercial set in the Yukon with the delightful Quick Claude character.  Oddly, Marathon John was played by a different actor for this outing (my research could not turn up any reason for the actor change, though the timing might have coincided with Mr. Wayne’s commitment to the Sinbad film).

I recall at least two other Marathon John television commercial from the era myself;  one that took place within WWI bi-planes and another that I believe was set again in the old west, but this time on a moving train (perhaps involving the return of Quick Carl?).   Up to now, only those first three have been published to the internet.

[Edit:  A year after this was published I would find a commercial reel for the bi-plan Marathon commercial, get it digitally transferred and posted right here on this site.]

By 1977, there had been a number of popular Marathon John ads that had been running on television.  They were so well-known that the characters were even invoked in Marathon’s print advertising:

I’d love to track down an original copy of that newspaper ad as well as the other commercial spots beyond the ones I’ve already shown today.  It would be great to be able to share them here.

In the meantime, I have that very special treat I promised at the top of today’s post; the world premier of a never-before-seen Marathon John commercial.  This is a CollectingCandy.com World Premiere Video – I hope you enjoy it.

And that’s everything for today’s post.  Tomorrow we’ll be back with Maximum Marathon Part Three.  Part Three will take the form of a CollectingCandy.com video segment where I’ll share a few insights into how the Quick Calvin spot came to be, and the conclusion to our Marathon bar coverage.

A New York City based writer, editor and sometimes actor. After spending much of the 1990′s in the comic book business helping tell the stories of Marvel Comics’ X-Men as series editor, he has since split his time between developing his own entertainment properties while still consulting and working on others. Having been described as “the Indiana Jones of lost and forgotten candy”, Jason is one of the country’s premier candy collectors and historians with his discoveries appearing in countless blogs, magazines, newspaper articles, and books. Always happy to share his knowledge and unique perspectives on this colorful part of our popular culture, Jason has consulted with New York’s Museum of Food and Drink and has also been a featured guest on Food Network’s Heavyweights, France’s M6 Capital, and New York’s TheActionRoom.com. My Google Profile+
View all posts by Jason Liebig →
This entry was posted in 1970's, Chocolate, Mars and tagged 1970's, 1970's candy bar, 70's, 70's candy, candy collecting, candy collection, candy collector, candy wrapper collection, candy wrapper collector, collectible, collecting candy, commercial, confectionery, confections, cowboy, Marathon bar, mascot, packaging, Patrick Wayne, spokesman, sweets, TV commercials, vintage candy wrapper, wrapper. Bookmark the permalink.

17 Responses to Maximum Marathon Part 2: The Commercials! Plus a World Premiere Video!