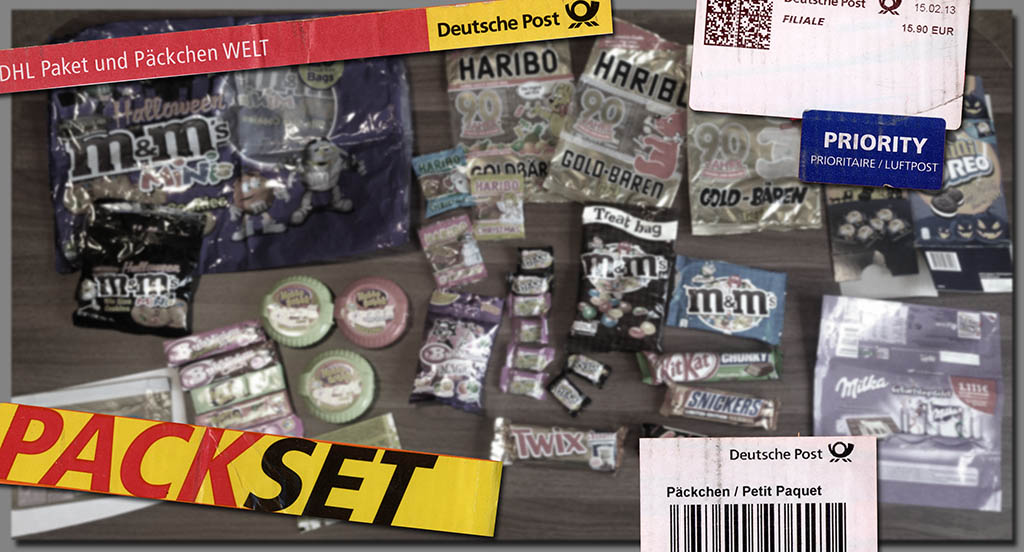 As a candy collector, it’s fun to pick up the things you can’t get locally, and it’s especially fun when those things come from overseas.

Though there is a rich and wonderful world of international confections to sample and consume, as a collector my favorite international pieces are the USA brands I know, specially packaged and sold in other countries.

Recently, I did an exchange with a pal of mine in Germany where I challenged him with picking up a number of “German versions of USA products”.  And over the weekend, I received my candy care package from him.  Today I’d like to share the contents.

It’s always exciting when you get a package like this from a friend or fellow collector.  You never know exactly what you’re going to get, so cracking the box for the first time is a surprise: 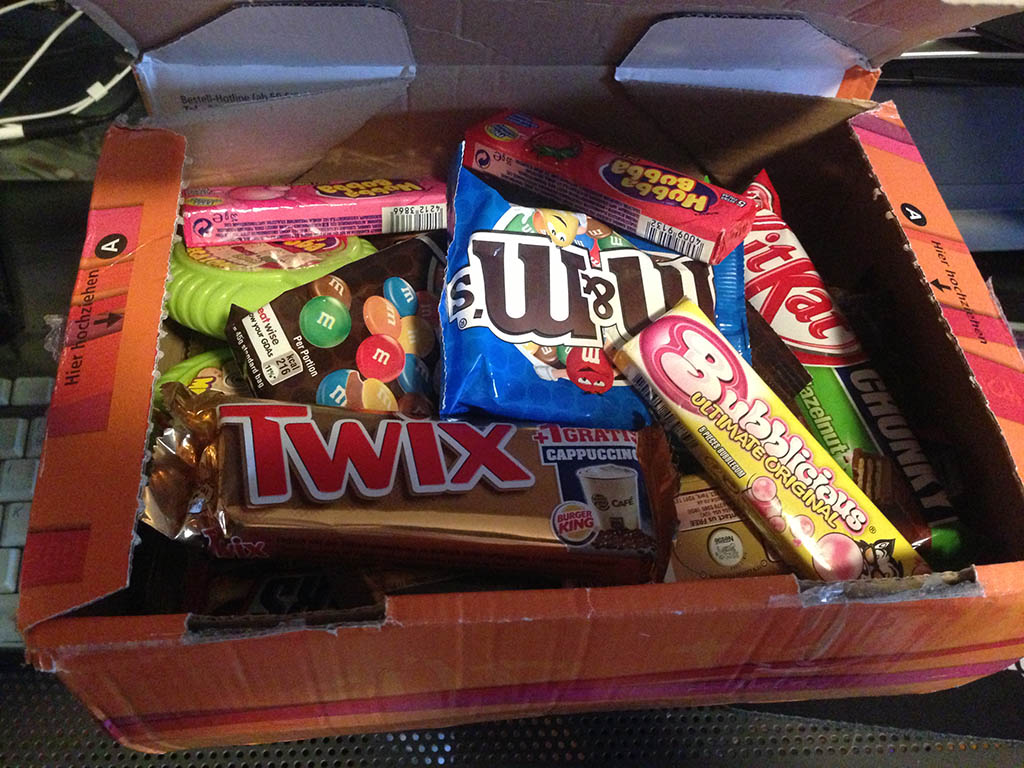 The first two items that caught my attention were the Twix with the Burger King offer and the Bubblicious Original pack with the cat mascot on it.

For me, an international version of a USA wrapper doesn’t have to have a unique or unusual flavor for it to be appealing (though that doesn’t hurt).  Sometimes it can have a different logo or a unique offer, or perhaps a unique mascot: 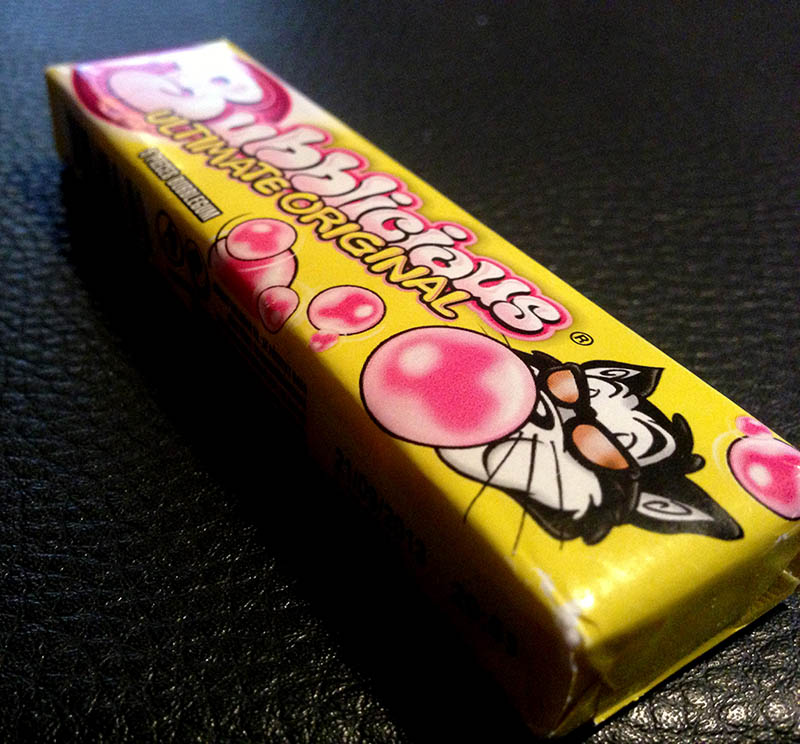 That Bubblicious pack wasn’t the only bubblegum in the box.  There was also a pack of Bubblicious Magic, which is a gumball product not sold in the United States: 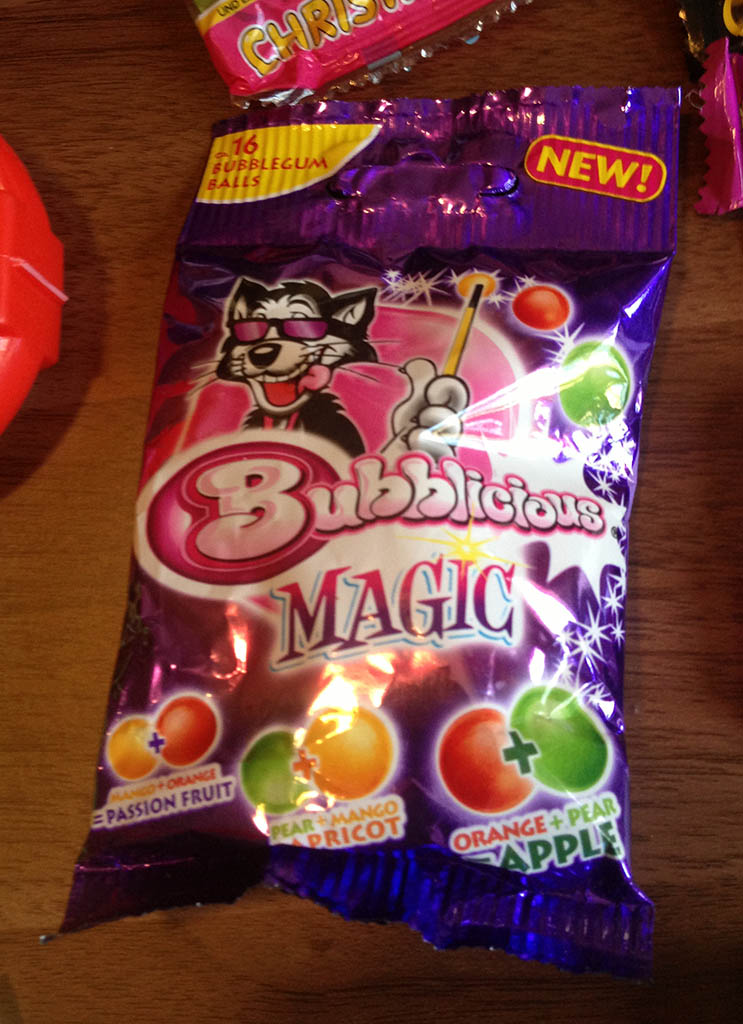 Cola is a flavor of Bubblicious I can’t find stateside, but there was one in this German candy care package.  I also received a nice assortment of European Hubba Bubba items: 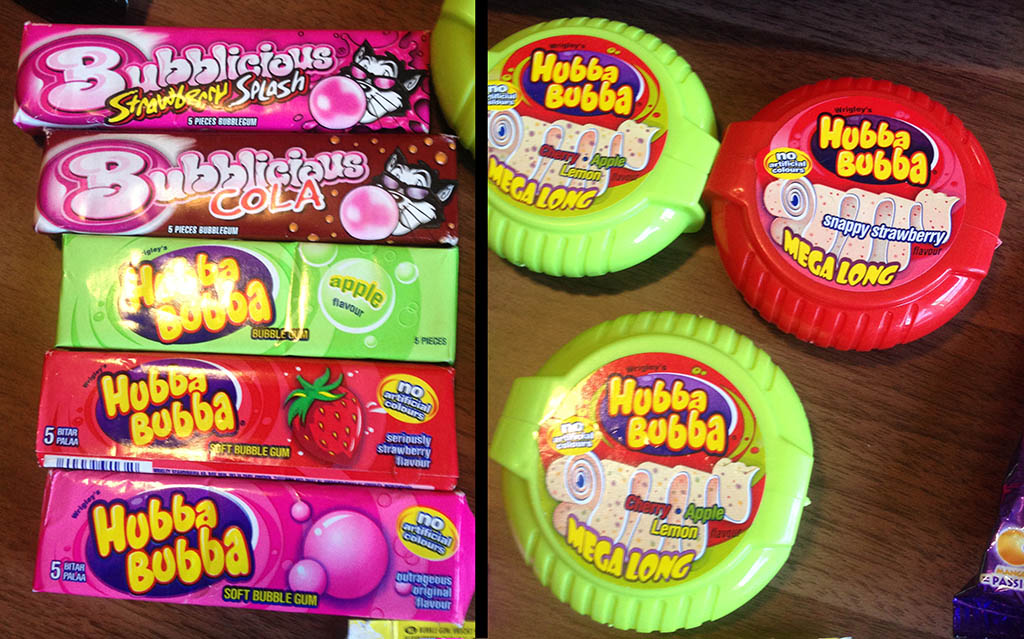 There was one interesting Norweigen bar included in the box.  Named Kvikk Lunsj, it translates to Quick Lunch, but it reminded me of something more familiar:

I thought it had the shape and general look of a KitKat, and upon opening, that’s exactly what it was like: 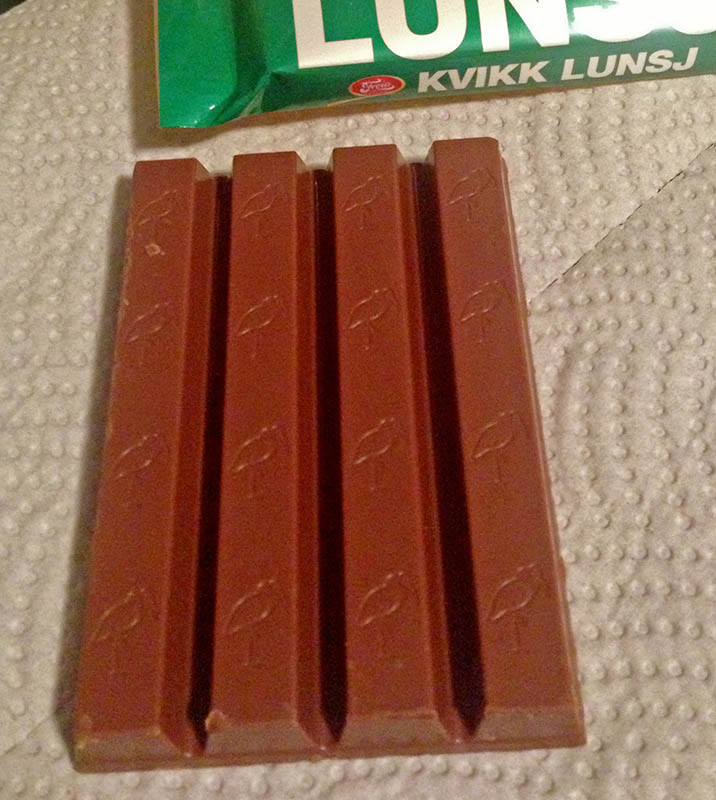 Of course there were a number of bars in there, too.  One was the latest release of the powerful-sounding Snickers Maximus, which has been a Limited Edition release a number of times. 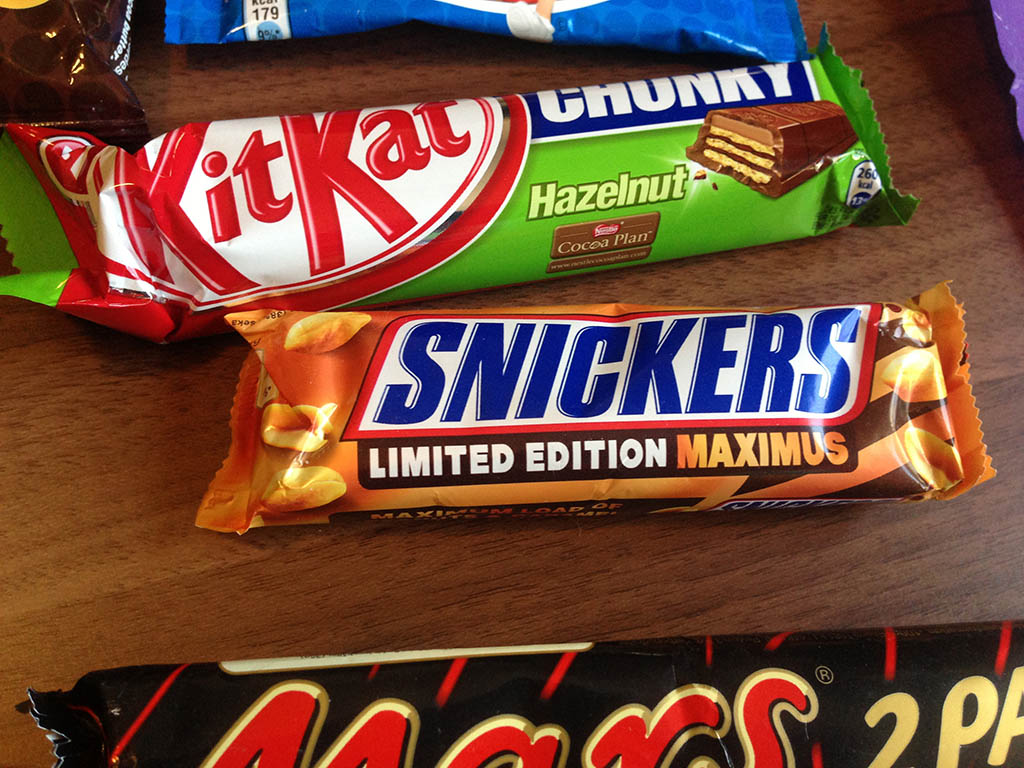 And one that didn’t survive long-enough to be photographed.  The always-delicious Kit Kat Chunky Peanut Butter.  [Yum!] 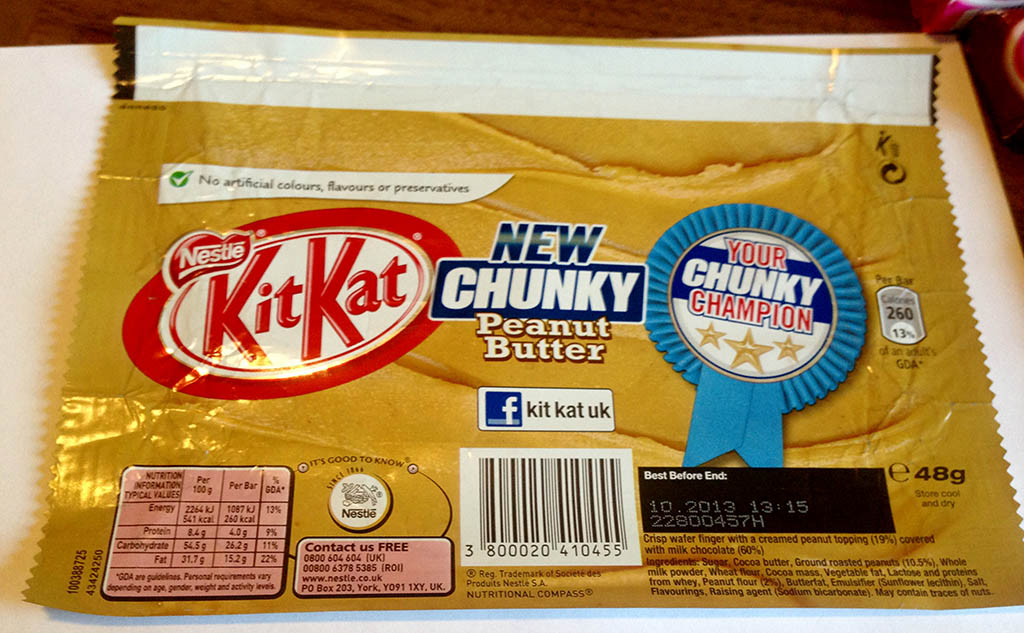 A few things arrived having already been consumed – which was expected.  It’s so expensive to ship overseas that I only ask for a few things to arrive with the candy still inside.

This next wrapper is some kind of birthday or anniversary Milka bar: 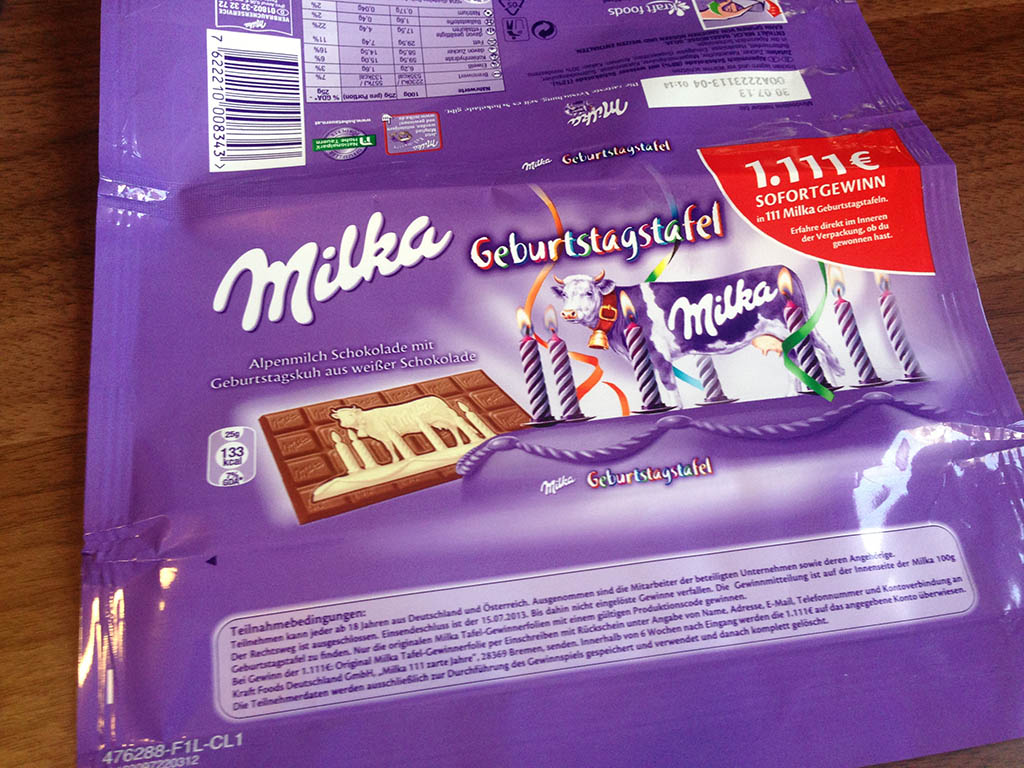 Next up is a particularly cool set of packages, as 2012 was a big 90th Anniversary for Haribo and they released a series of packages using vintage logos and mascots. 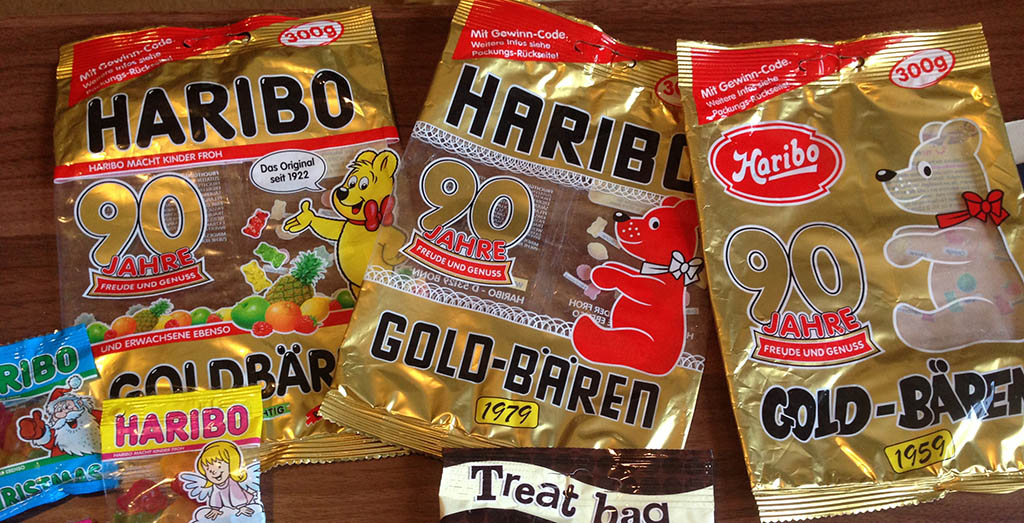 Those are pretty great.  It’s not the only Haribo that was found in the box, as I also discovered a trio of Christmas-themed mini Haribo packs: 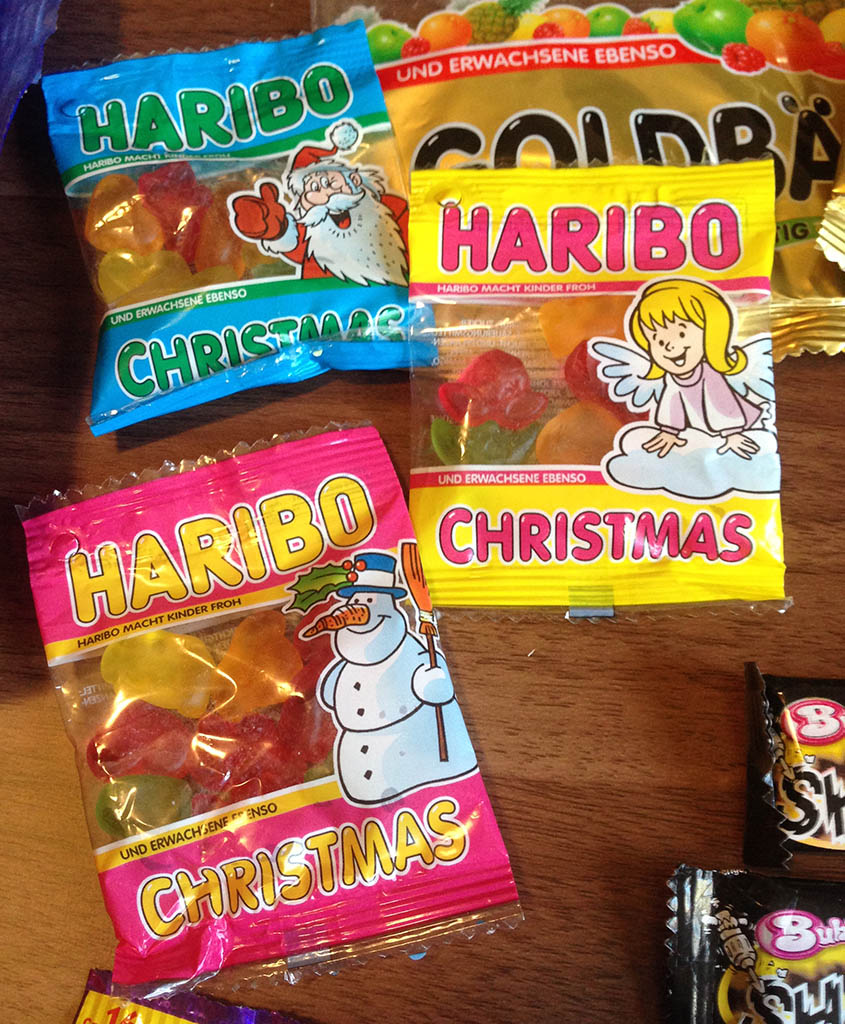 And finally, here is everything (I think) spread out for viewing: 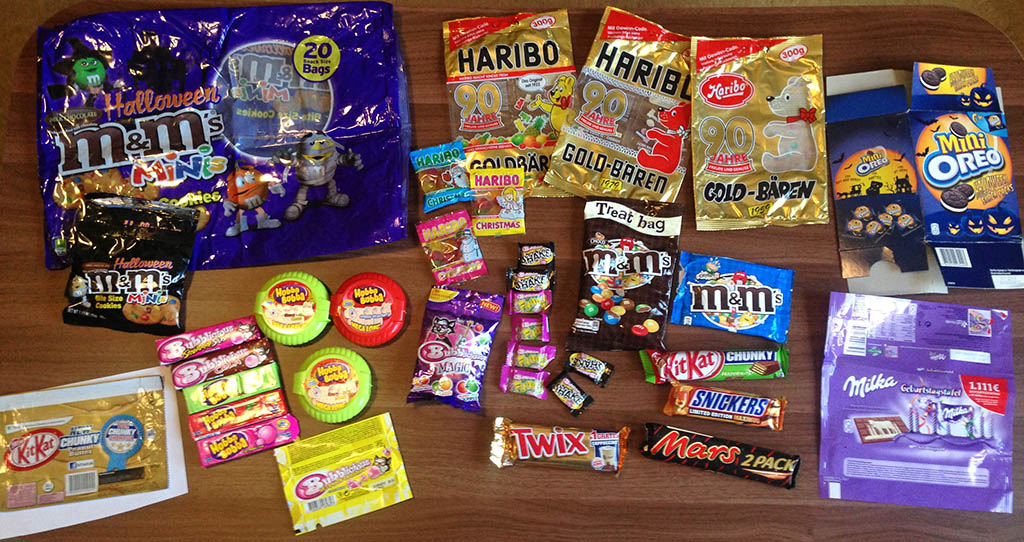 I didn’t highlight every single piece in that photo today, and I hope that’s okay.   Looking at it all laid-out like this, I think it makes for a pretty great assortment of goodies.  [Special thanks to my pal Sebastian for selecting them all with care and shipping them over.]

One of the best parts of any hobby is when you can share it, and when you have the opportunity to make friends through it. So it is that I’ve been able to do a little bit of exchanging with some fellow collectors and found other non-collector friends who have picked up things for me over the years.  It’s a great bit of fun.

And that’s everything for today’s post and my candy care package from Germany.

A New York City based writer, editor and sometimes actor. After spending much of the 1990′s in the comic book business helping tell the stories of Marvel Comics’ X-Men as series editor, he has since split his time between developing his own entertainment properties while still consulting and working on others. Having been described as “the Indiana Jones of lost and forgotten candy”, Jason is one of the country’s premier candy collectors and historians with his discoveries appearing in countless blogs, magazines, newspaper articles, and books. Always happy to share his knowledge and unique perspectives on this colorful part of our popular culture, Jason has consulted with New York’s Museum of Food and Drink and has also been a featured guest on Food Network’s Heavyweights, France’s M6 Capital, and New York’s TheActionRoom.com. My Google Profile+
View all posts by Jason Liebig →
This entry was posted in Gummies, M&M's, Mars, Nestle and tagged British, candy collecting, candy collection, candy collector, candy wrapper collection, candy wrapper collector, collectible, collecting candy, confectionery, confections, European, German, Germany, Haribo, packaging, sweets, UK, United Kingdom, vintage candy wrapper, wrapper. Bookmark the permalink.