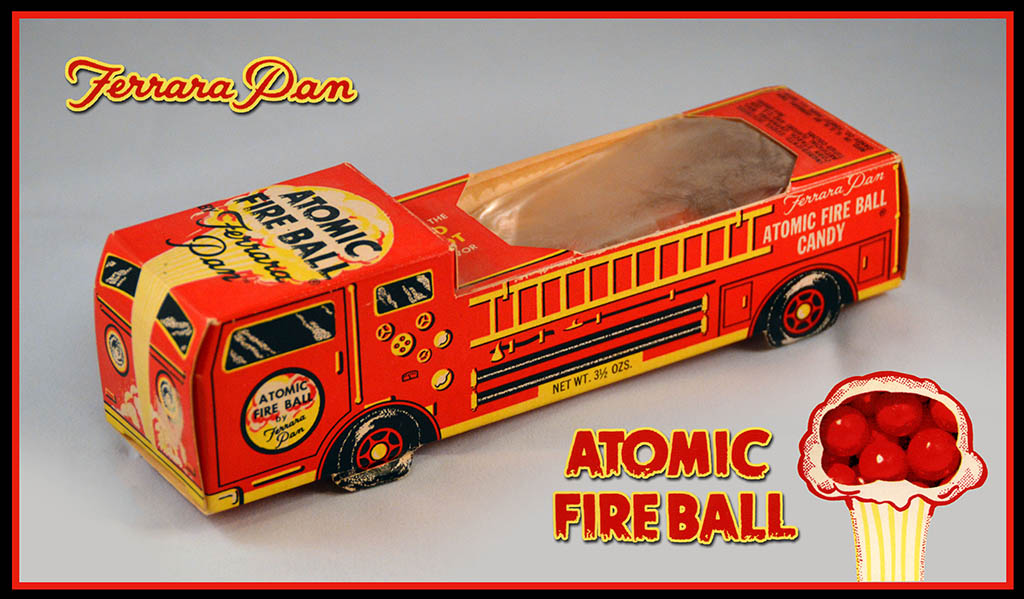 Back in 1975, Ferrara Pan took a pair of its mainstay offerings and presented them in novelty boxes, each shaped like a fun vehicle.   Of the two, I’ve managed to find the Atomic Fire Ball Candy (Fire) Engine and today I’ll be talking about that as well as the other; Ferrara Pan’s Jaw Breakers Candy Express.

I first shared images of this nifty piece of confectionery packaging during my New Year’s Eve video post.   When I did, I had guessed that it might have dated back to the late 1960’s, but I was wrong. 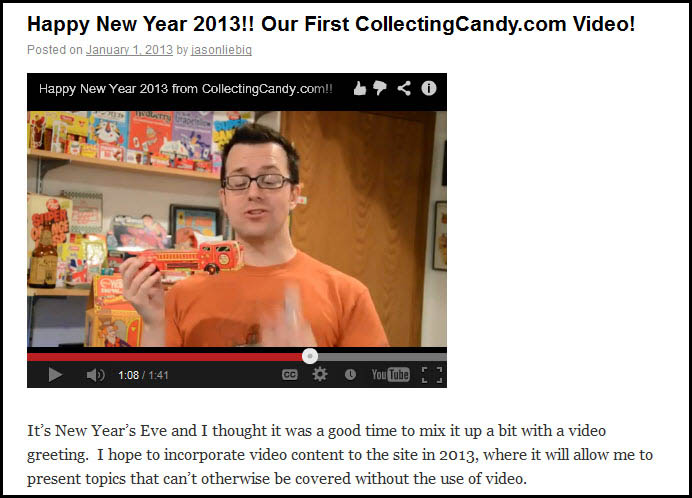 Only a few nights ago I was flipping through the pages of one of my 1975 candy trade magazines and made a discovery in the form of two clippings related to the Ferrara Pan truck.   Those revealed that the Atomic Fire Ball truck was introduced in 1975 and not only that, but that is was paired up with an awesome Ferarra Pan Jaw Breakers truck, too! 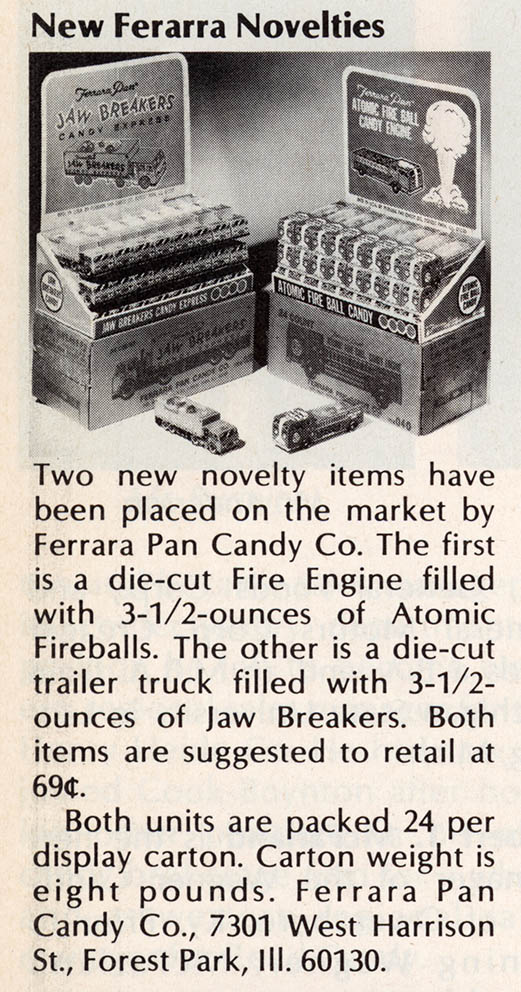 Finding that news piece was huge for me and clarified my understanding of this super-neat piece of candy packaging.

Since that’s such a great photo, I wanted to share a larger version with you (I wish I had a sharper and in-color version of this): 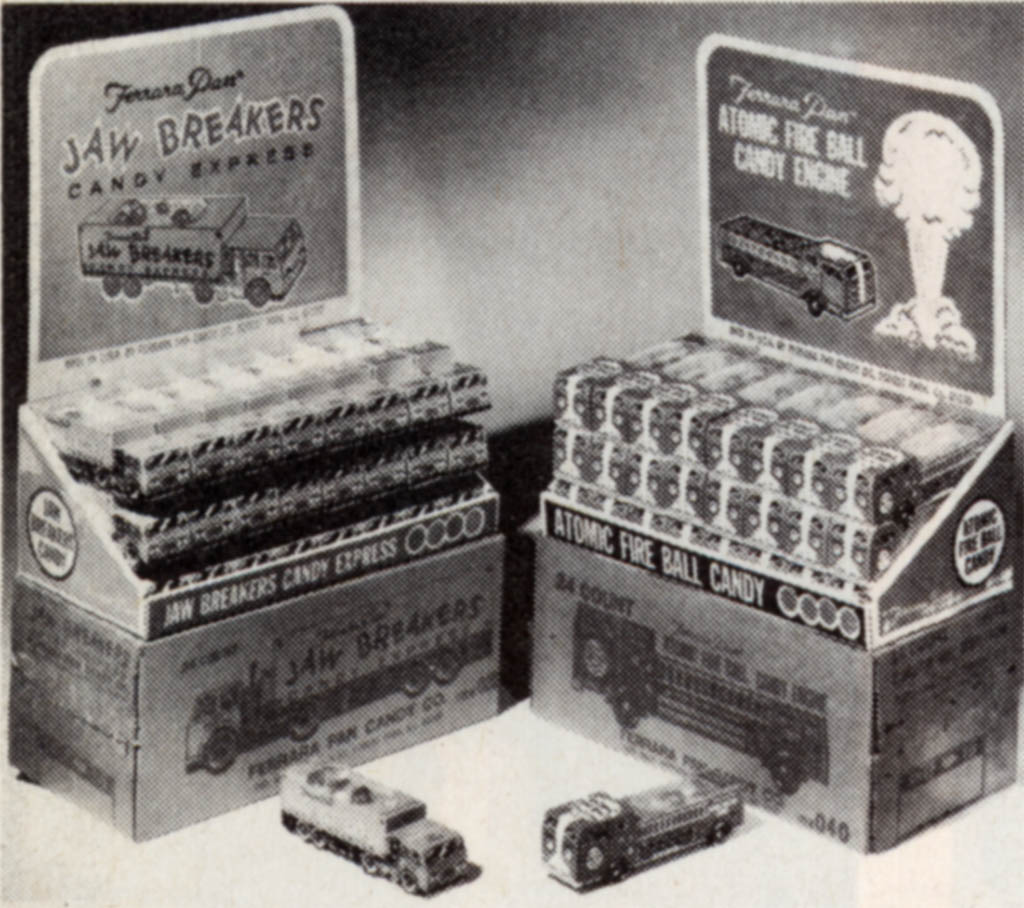 The trucks were also displayed at a candy expo that year, as shown in this other 1975 trade clipping:

What a cool pair of candy packages!

The example of the Atomic Fire Ball Engine I have in my collection still has about half-a-dozen of the original individually cello-wrapped Fire Ball candies inside – it’s pretty amazing.

Here are a few looks at my Atomic Fire Ball Candy Engine box: 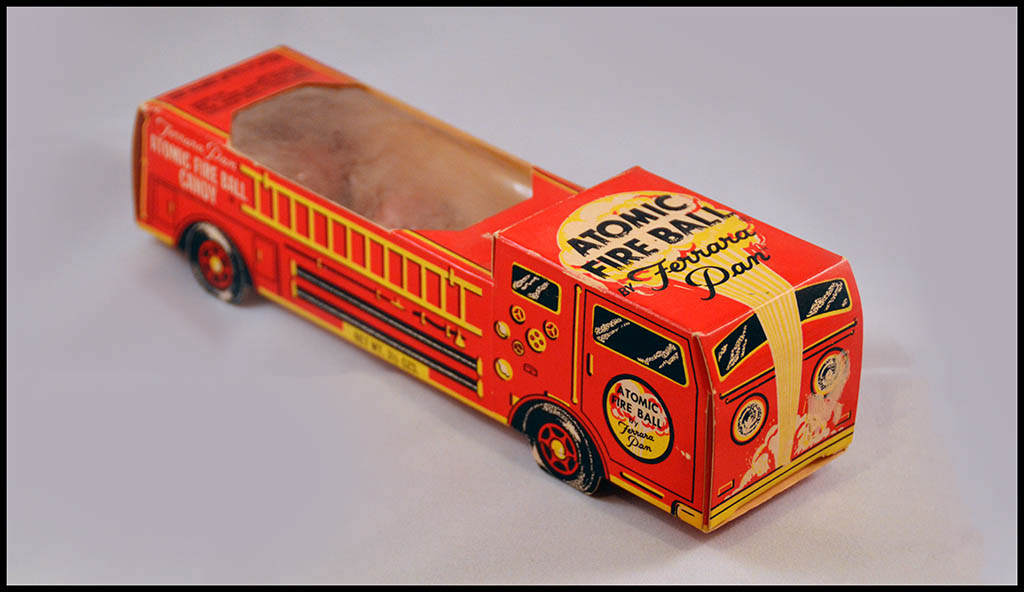 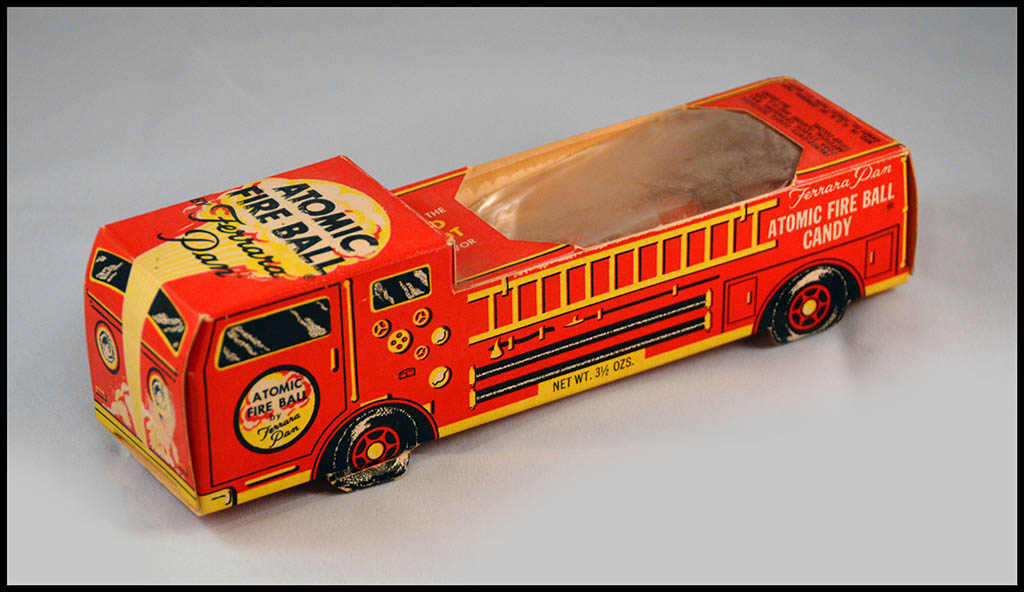 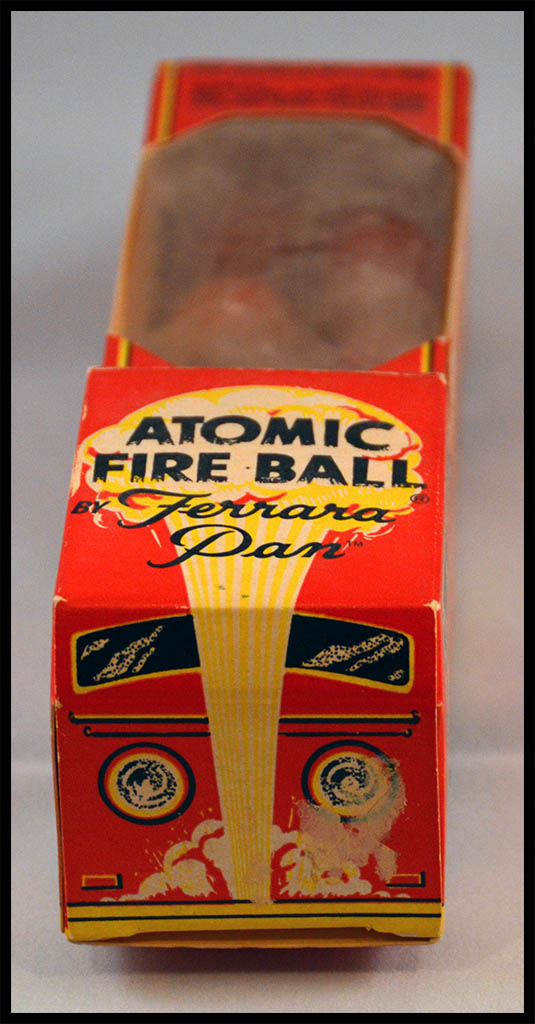 You’ll notice a little price tag residue remains on the front of the box in that last photo.  The glue is so old now and so bonded to the paper that I was afraid to try to scrape it away.   I would have preferred to be able to remove that, but it doesn’t detract from the look too much.  It’s still a beauty!

Lastly, I temporary removed the candy from the truck for a pair of archival scans.  In this way, you can get a pretty good look at the box graphics as well as some of how it was constructed: 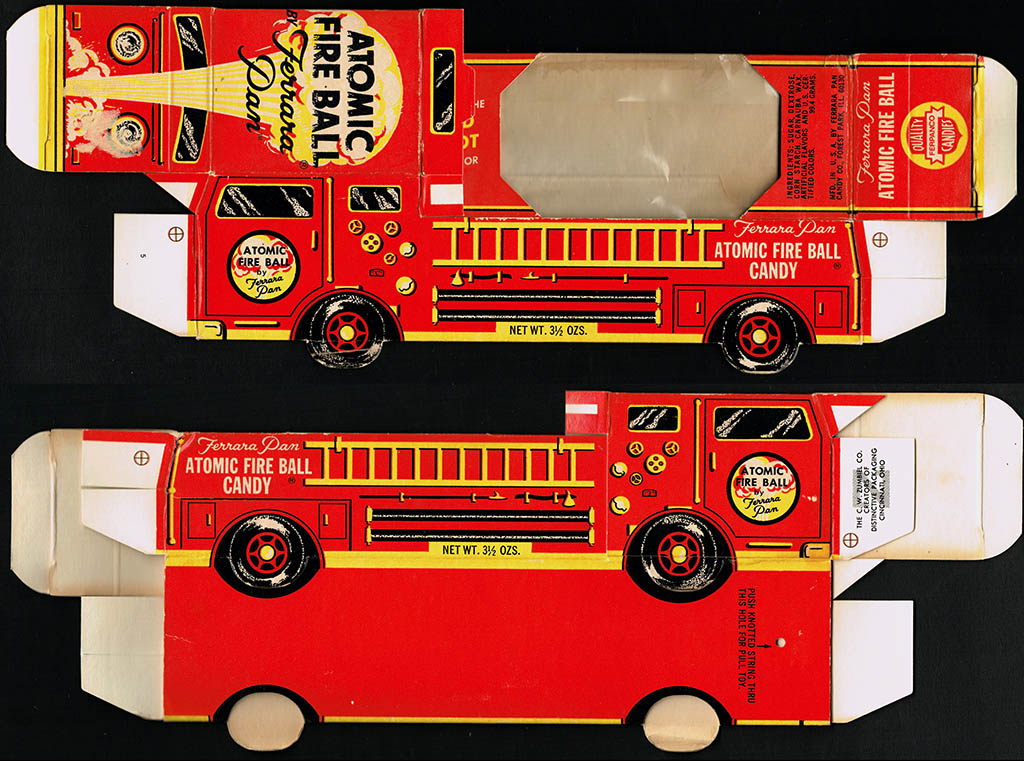 It’s great to finally be able to put a definite origin year on this fire truck box and it’s neat to see the Jaw Breakers truck as well.  Of course now I really really want to find one of the Jaw Breakers trucks.  But that’s what it is to be a collector – always finding something new to hunt for.

And that’s everything I’ve got to share on this awesome bit of 70’s novelty candy packaging.

A New York City based writer, editor and sometimes actor. After spending much of the 1990′s in the comic book business helping tell the stories of Marvel Comics’ X-Men as series editor, he has since split his time between developing his own entertainment properties while still consulting and working on others. Having been described as “the Indiana Jones of lost and forgotten candy”, Jason is one of the country’s premier candy collectors and historians with his discoveries appearing in countless blogs, magazines, newspaper articles, and books. Always happy to share his knowledge and unique perspectives on this colorful part of our popular culture, Jason has consulted with New York’s Museum of Food and Drink and has also been a featured guest on Food Network’s Heavyweights, France’s M6 Capital, and New York’s TheActionRoom.com. My Google Profile+
View all posts by Jason Liebig →
This entry was posted in 1970's, Hard Candy, Novelty and tagged 1970's candy, 70's candy, Atomic Fireballs, candy collecting, candy collection, candy collector, candy wrapper collection, candy wrapper collector, collectible, collecting candy, confectionery, confections, Ferrara Pan, novelty candy, novelty candy container, packaging, sweets, vintage candy wrapper, wrapper. Bookmark the permalink.