It’s Super Bowl XLVII (Superbowl 47) today, the NFL’s championship game between the San Francisco 49’ers and the Baltimore Ravens.  To mark that occasion I wanted to share a few NFL and Super Bowl related Snickers candy wrappers I’ve got in my collection.

First up is a Snickers wrapper with a wonderful football graphic that offered a chance to attend the 2009 Super Bowl.  I really love the football-lacing element of this design – so cool: 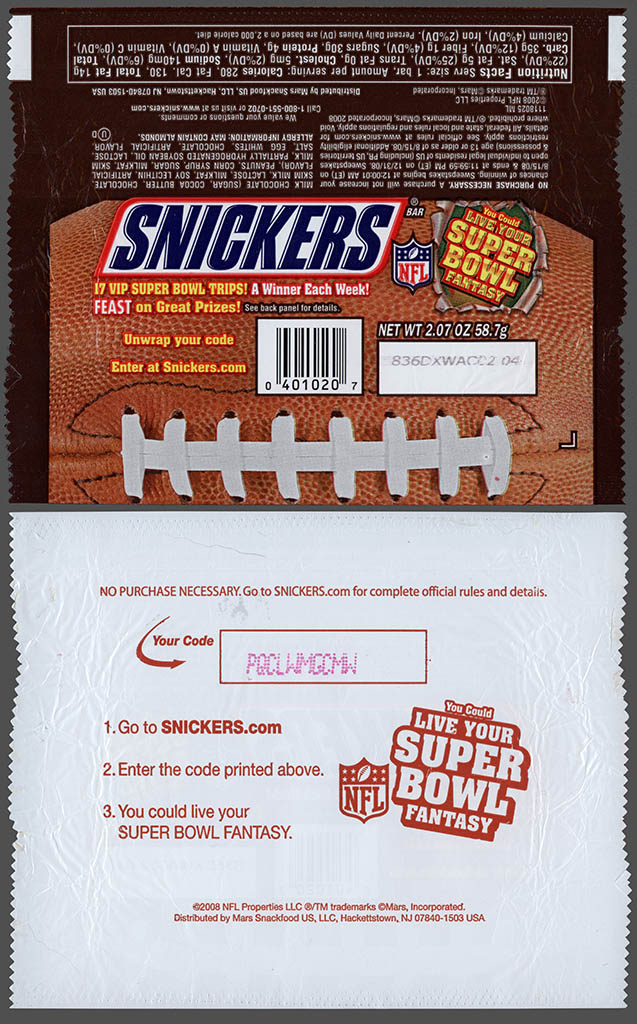 Next up is something pretty unusual.  It’s a set of wrappers that represent every NFL team.  They were offered in a loosely football-shaped package last Fall, in the lead up to football season.  These were a Wal-Mart exclusive item. 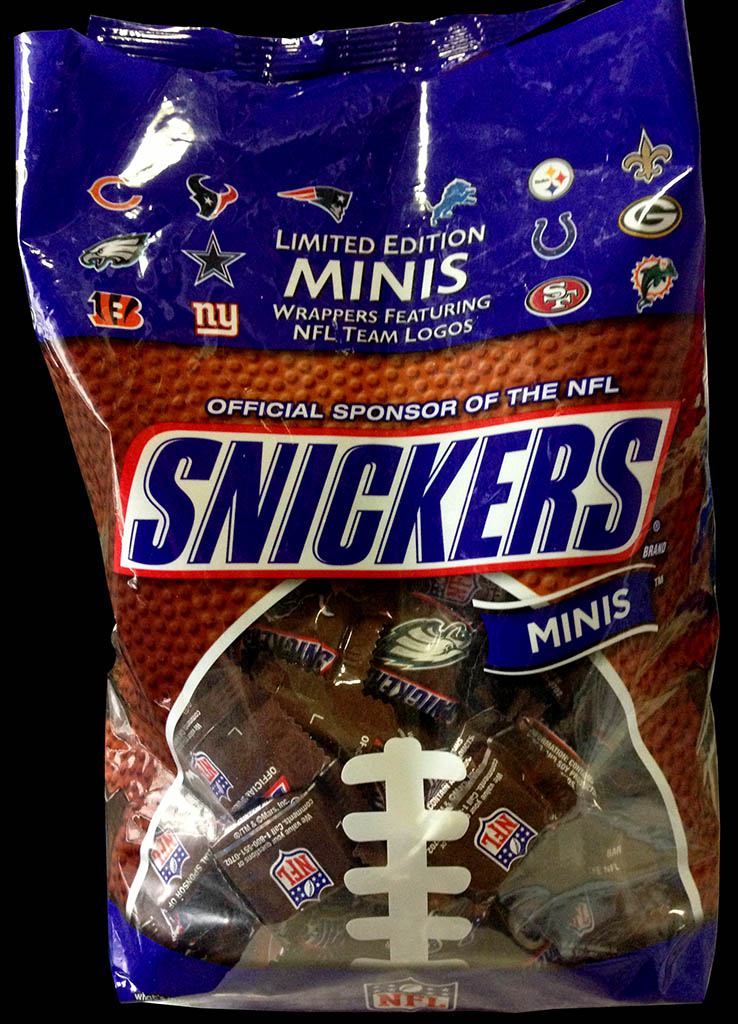 After emptying and flattening that package, I scanned it so I could show all of the graphics:

It took a lot of time and effort (and two full bags of these minis), but I finally put together a full set of all 32 NFL team wrappers.  Here they are, broken down by NFL division:

That’s it – all thirty-two wrappers!  Whew!

I’d like to point out that I could only find a single Houston Texans wrapper across both full 40oz packages that I bought.  So this was no easy set to complete.   Which means that one of the packages didn’t have a complete set.  Makes me glad I bought two!

And that’s everything I’ve got to share on this Super Bowl Sunday!  For me it’s time to  help get our kitchen ready for Super Bowl chilli cheese dogs – yum!

I hope everyone enjoys today’s game (and the commercials, too)!

A New York City based writer, editor and sometimes actor. After spending much of the 1990′s in the comic book business helping tell the stories of Marvel Comics’ X-Men as series editor, he has since split his time between developing his own entertainment properties while still consulting and working on others. Having been described as “the Indiana Jones of lost and forgotten candy”, Jason is one of the country’s premier candy collectors and historians with his discoveries appearing in countless blogs, magazines, newspaper articles, and books. Always happy to share his knowledge and unique perspectives on this colorful part of our popular culture, Jason has consulted with New York’s Museum of Food and Drink and has also been a featured guest on Food Network’s Heavyweights, France’s M6 Capital, and New York’s TheActionRoom.com. My Google Profile+
View all posts by Jason Liebig →
This entry was posted in Mars and tagged candy collecting, candy collection, candy collector, candy wrapper collection, candy wrapper collector, collectible, collecting candy, confectionery, confections, football, licensed, limited edition, M&M/Mars, NFL, packaging, Snickers, Super Bowl, Superbowl, sweets, vintage candy wrapper, wrapper. Bookmark the permalink.