Mars Mixes it Up – A Tricky Trinity of Timeless Brands: Part One

In the United States today, when  you mention the brand names Snickers and 3-Musketeers, your mind will recognize two of the most popular and timeless candy bar names.  Mention the brand name Marathon here, and maybe you remember the classic chocolate and caramel treat I covered yesterday.  But in the UK – they’ll give you a different answer.

Today and tomorrow, I’m going to cover forty years of confectionery history across two continents, and have some fun tracking the various ways these brand names have been used by M&M-Mars.

For decades the Snickers bar was sold by Mars under two different names, depending on what part of the world you were in.  Known around the globe as Snickers, it has been one of the endearing chocolate bar brand names – unless you found yourself in the UK and wanted one, in which case you’d have to ask for a Marathon.  You see, until recently, the Snickers bar had always been sold under the Marathon name in the United Kingdom.

Early on in my discoveries as a collector, I delighted in learning this bit of trivia and even though I had no personal history with the UK Marathon, the design was so familiar it was nonetheless a nostalgic experience to see one. 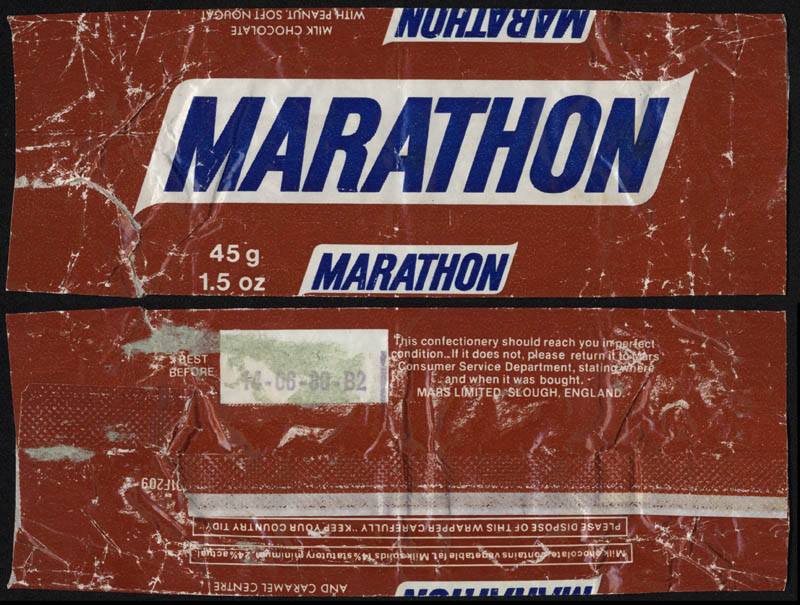 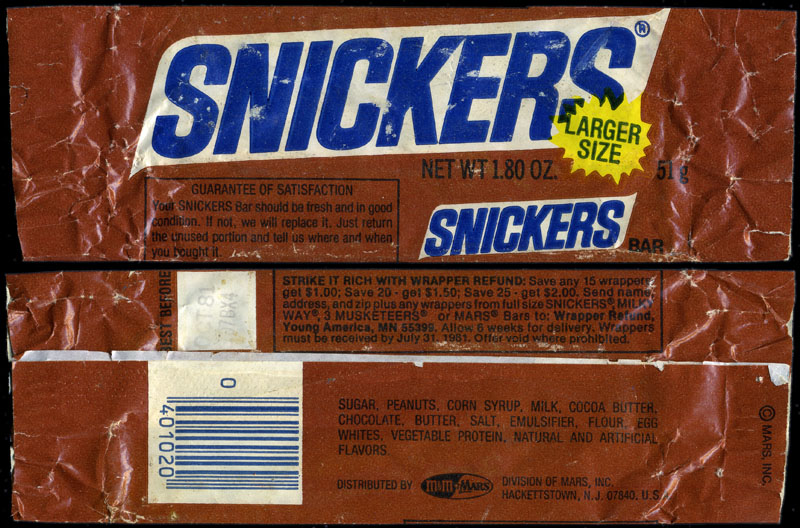 And here’s another wrapper from about the same era, just to show how odd-yet-fun this all was. 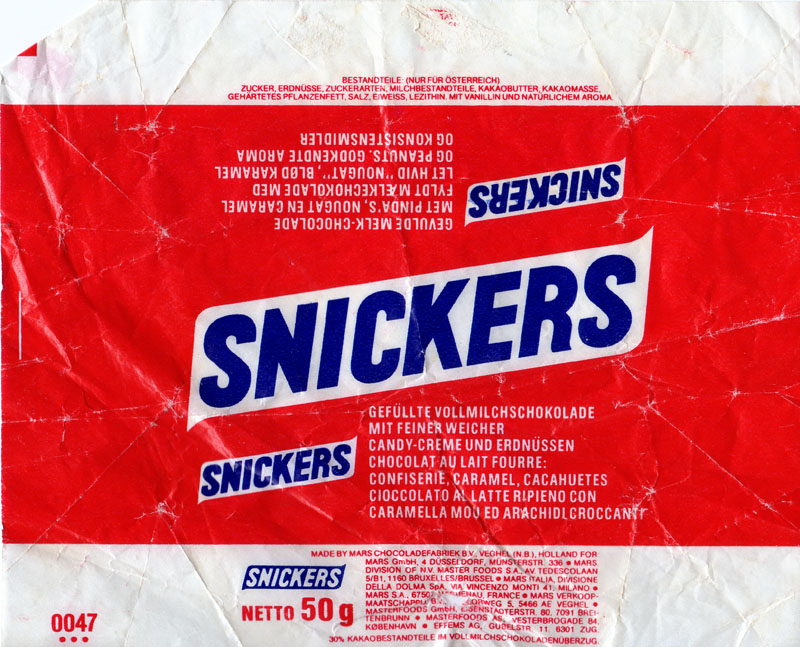 I love the idea that these brands took different forms for different parts of the world, and that’s the way it was for most of the 20th century.   [I also love that red Euro Snickers wrapper – I gotta find one of those!]

During the 1970’s, this regional differentiation likely caused some confusion for tourists going either direction, due to the popularity of our own different and distinctive Marathon bar.

By the late 1980’s however, it was becoming more and more important for Mars to assert the Snickers brand name, even in the UK, which was becoming ever more clear on the wrappers themselves. 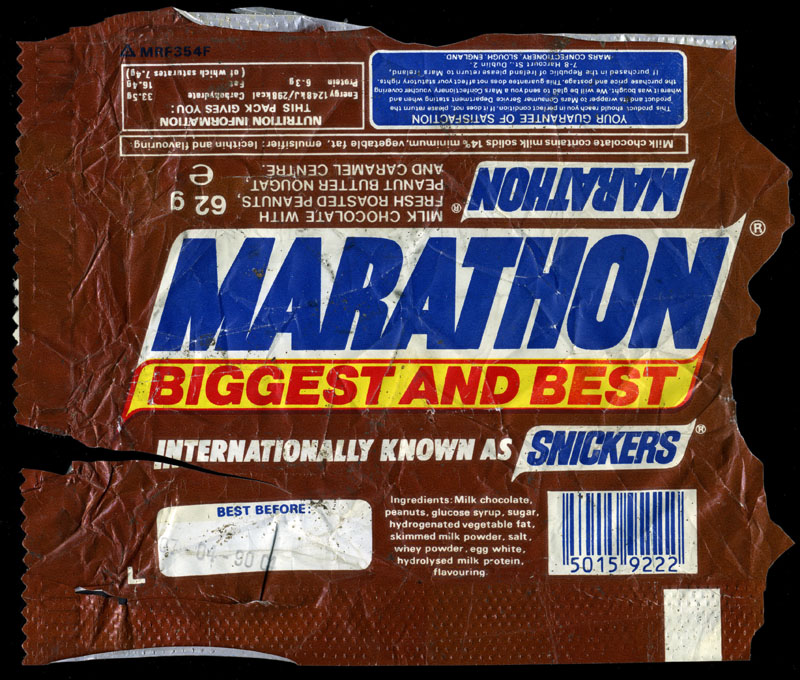 Mars was rapidly evolving the Marathon packaging at this time, as you can see from this 1990 wrapper (recovered from my full candy bar posting from a few days ago): 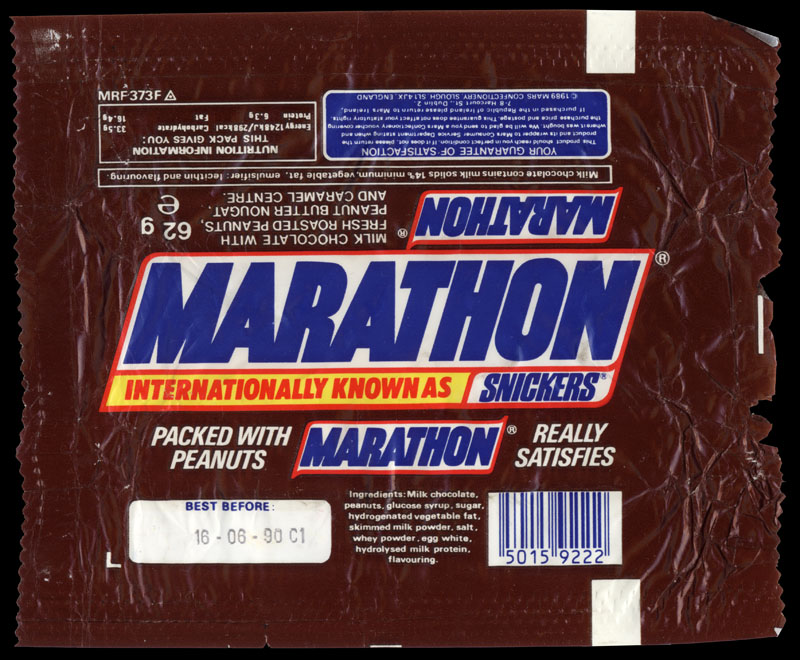 So by 1990, with references to the Snickers brand, the writing was on the wall.  No less than two years later, a Snickers bar was a Snickers bar, even in the United Kingdom.  The Marathon name was gone. 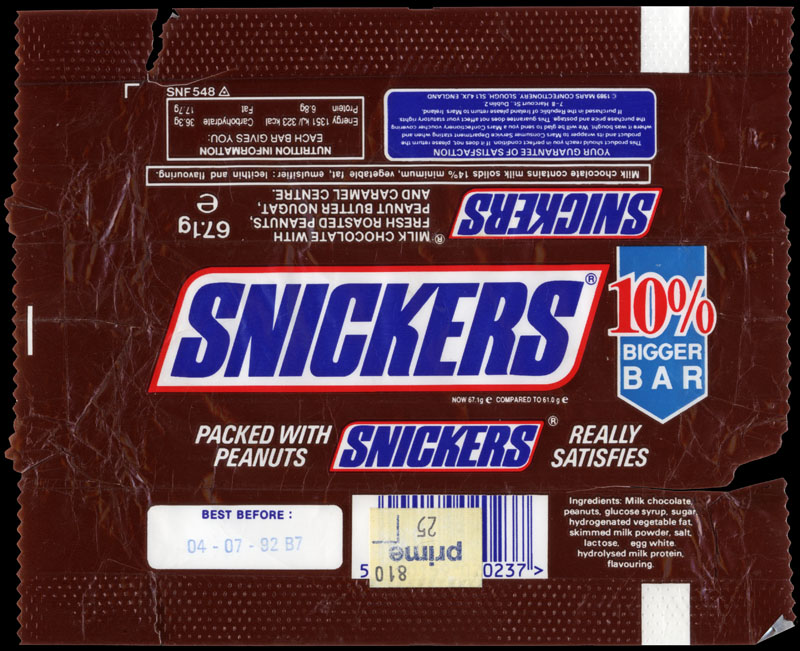 Having some knowledge of marketing, I can’t fault Mars’ decision to make the change, but my heart goes out to those who grew up enjoying Marathons, only to have to adapt to a new identity for their satisfying favorite.

So by 1992, the UK’s Marathon was no more – and the Snickers inevitable global domination was complete.

I’ve read that Mars has considered bringing the Marathon branding back for a limited nostalgia release, but I’ve yet to catch a wrapper if they did.  It would be awesome to see, and fun to snag the wrapper.

Marathon returns to US shores.

For those that caught yesterday’s post – you will recall that the US’s very different Marathon bar was discontinued in the early 1980’s.

While I pine for a nostalgic relaunch of that packaging and the bar, Mars had other ideas for the name – as they used it to brand their 2005 launch of an energy bar: 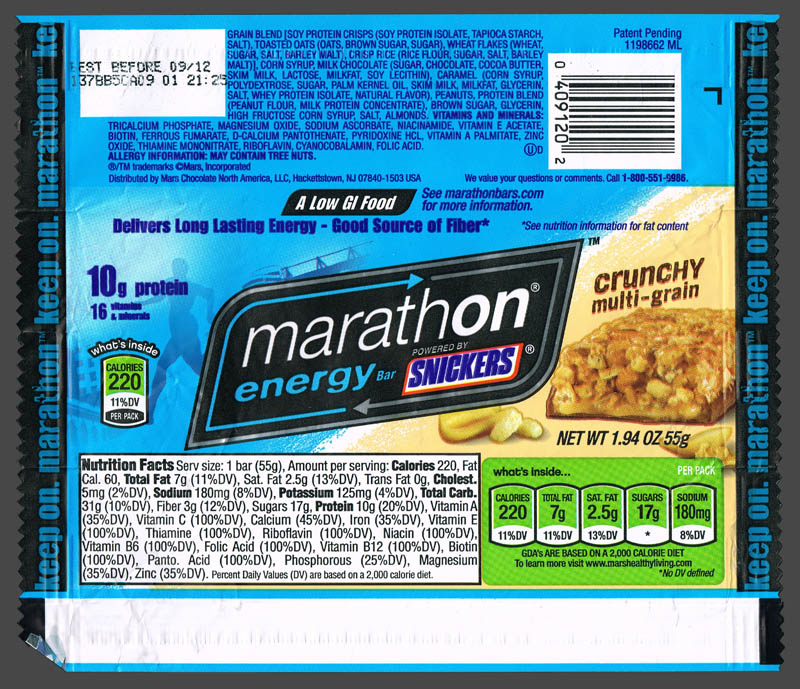 Yes, after putting the effort into re-branding the United Kingdom’s Marathon to the Snickers name – the Snickers-Marathon connection is once again renewed and intertwined.

For the record – I don’t think consumers will suffer undue confusion if M&M-Mars decides to crank out a limited return of the classic US Marathon… that delicious braid of chocolate-covered caramel.  Just sayin’.

Tomorrow I’ll present the second half of this Tricky Trinity, revealing the lesser-known tale of how Marathon and 3-Musketeers brand name histories are also tied together.

Oh, and before I go, one last Snickers wrapper from the UK – produced by Mars of Ireland in 2008:

4 Responses to Mars Mixes it Up – A Tricky Trinity of Timeless Brands: Part One