If you’ve ever visited a theme park, you know that souvenirs are everywhere and come in all shapes and sizes.  That’s certainly true for the Disney Parks and over the years they’ve released all manner of park-exclusive confections, with colorful packaging that likely became souvenirs for people around the globe.  With that in mind, today I’m going to take a look at the pieces of Disney “souvenir” candy packaging I’ve got in my collection.

I first visited Walt Disney World with my family in 1975 and for my young mind it was a magical, transcendent experience.   Here’s a photo from that trip which prominently features our awesome tour guide.  At the time I was pretty sure she was the neatest girl in the world: 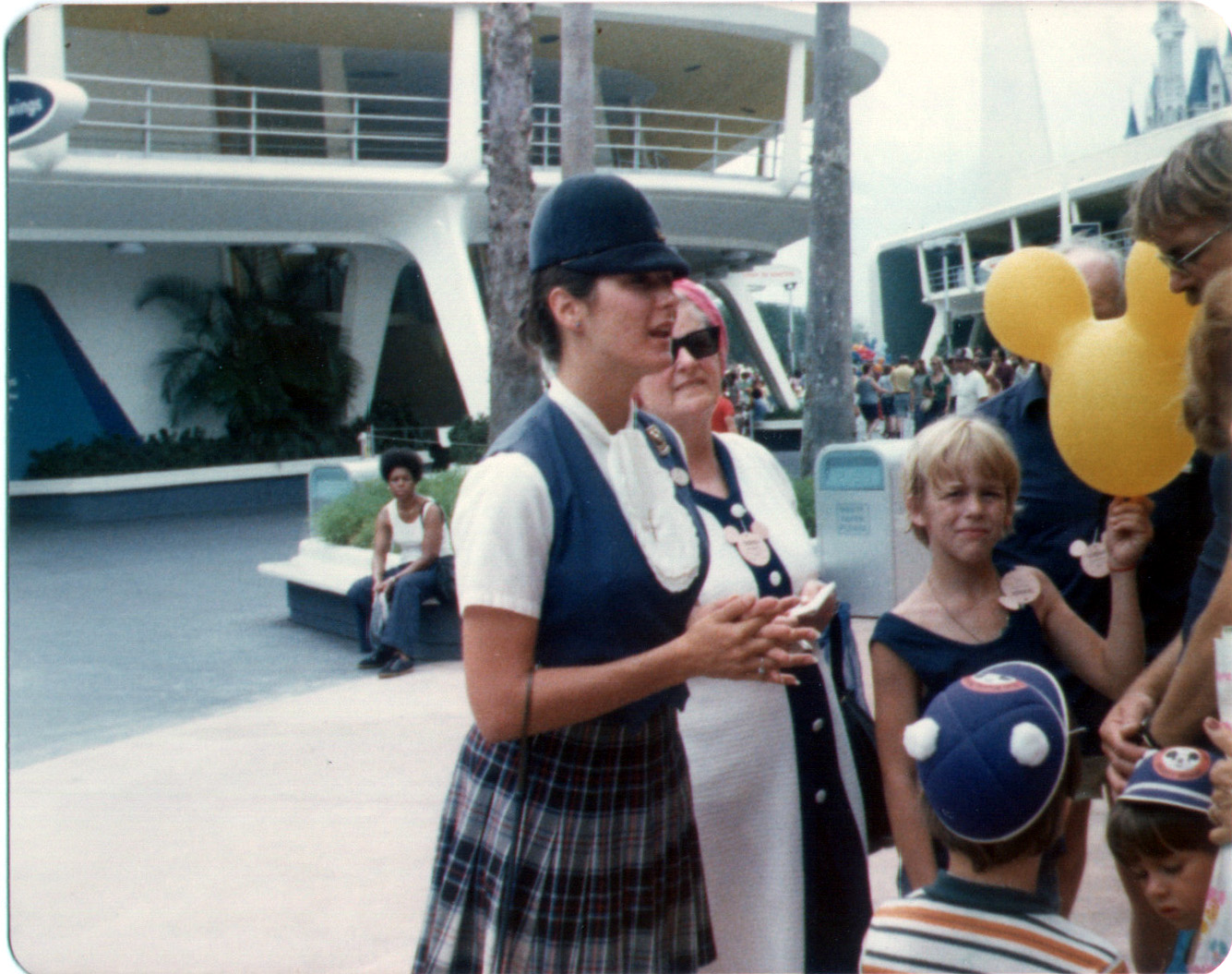 My family at Disney World 1975

Though my back is to the camera in this shot, you can see my blonde older brother wincing a bit for some long-forgotten reason.  Perhaps he was predicting the mixed emotions I would experience 37-years-later upon seeing myself wearing a Mickey Mouse hat… with pom poms on it.

Though I didn’t save any candy wrappers from that magical vacation so long ago, I do have what I believe are the style of wrappers that would have been on bars sold at the Walt Disney World park then.  Here they are: 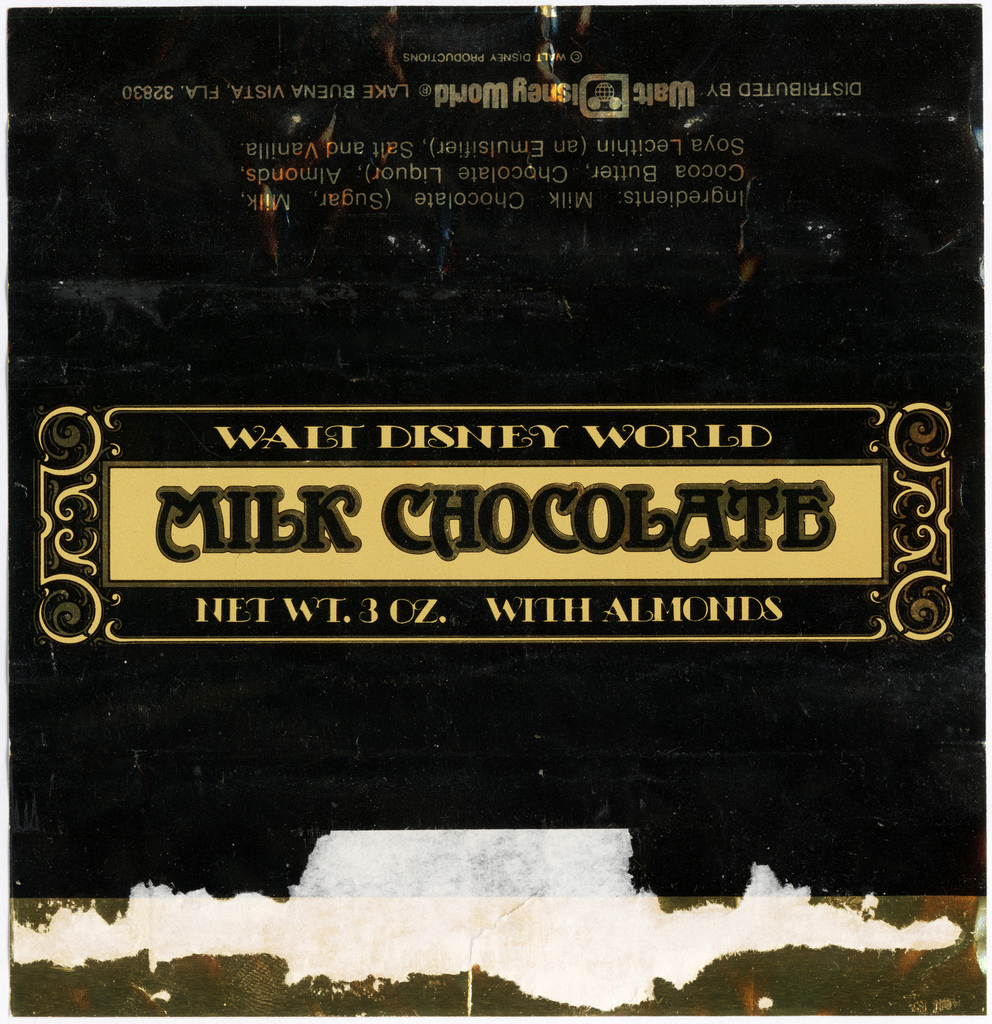 Jumping ahead to 1990, Disney was a very different company and the parks had expanded quite a lot – especially the Florida location.  Their candy offerings expanded, too.

For a time, they even licensed a few major candy brands and gave them the Disney treatment.   I only learned about these recently and I find them especially interesting.  They licensed the Jujyfruits and Gobstoppers names for this release – but I wonder if there were others – who knows, maybe there are Disney Nerds boxes out there somewhere? 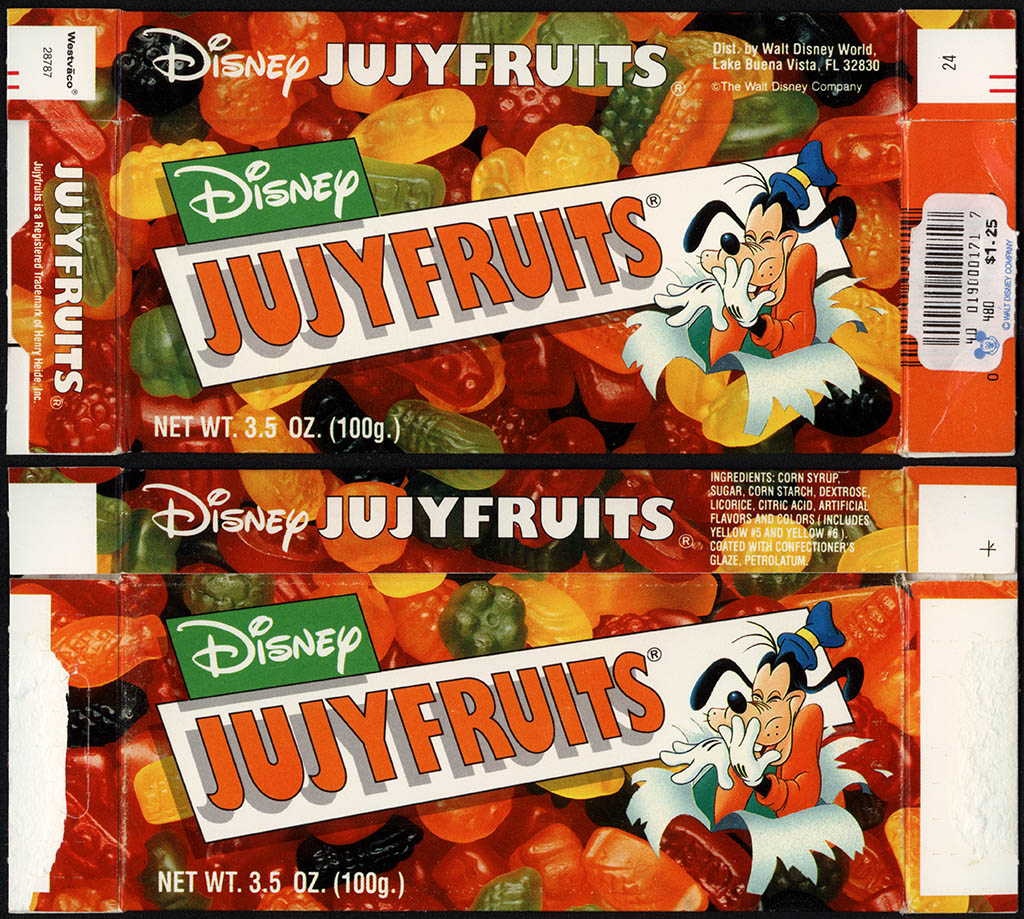 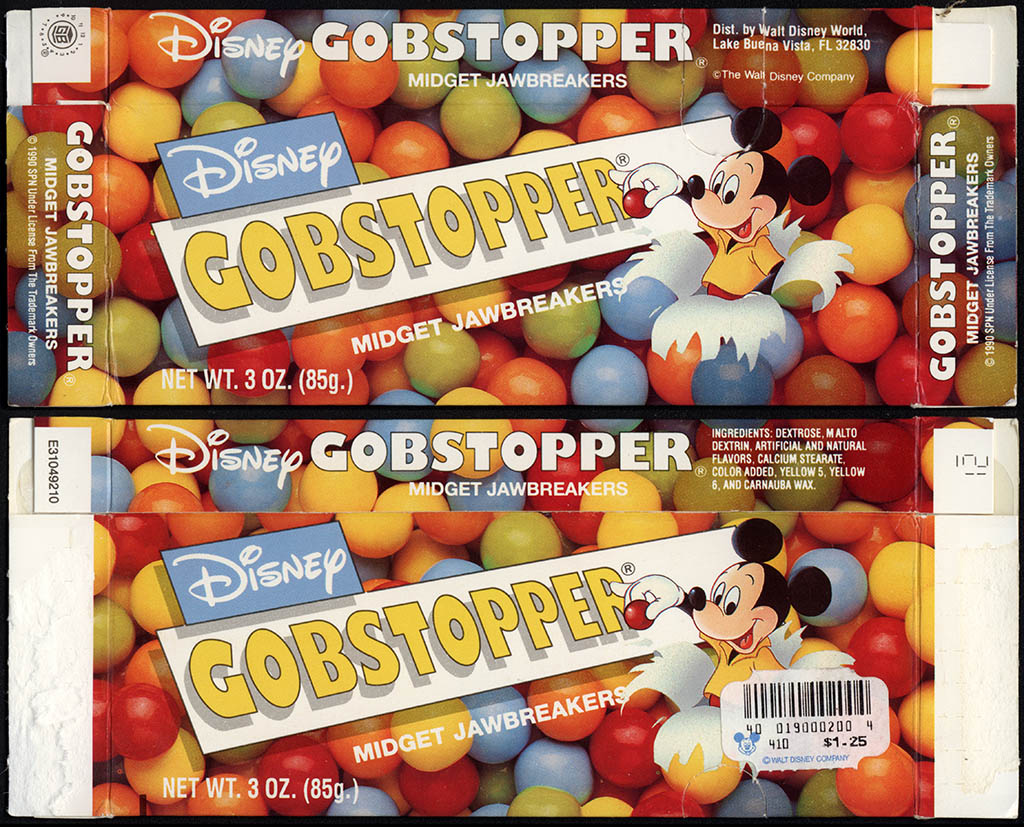 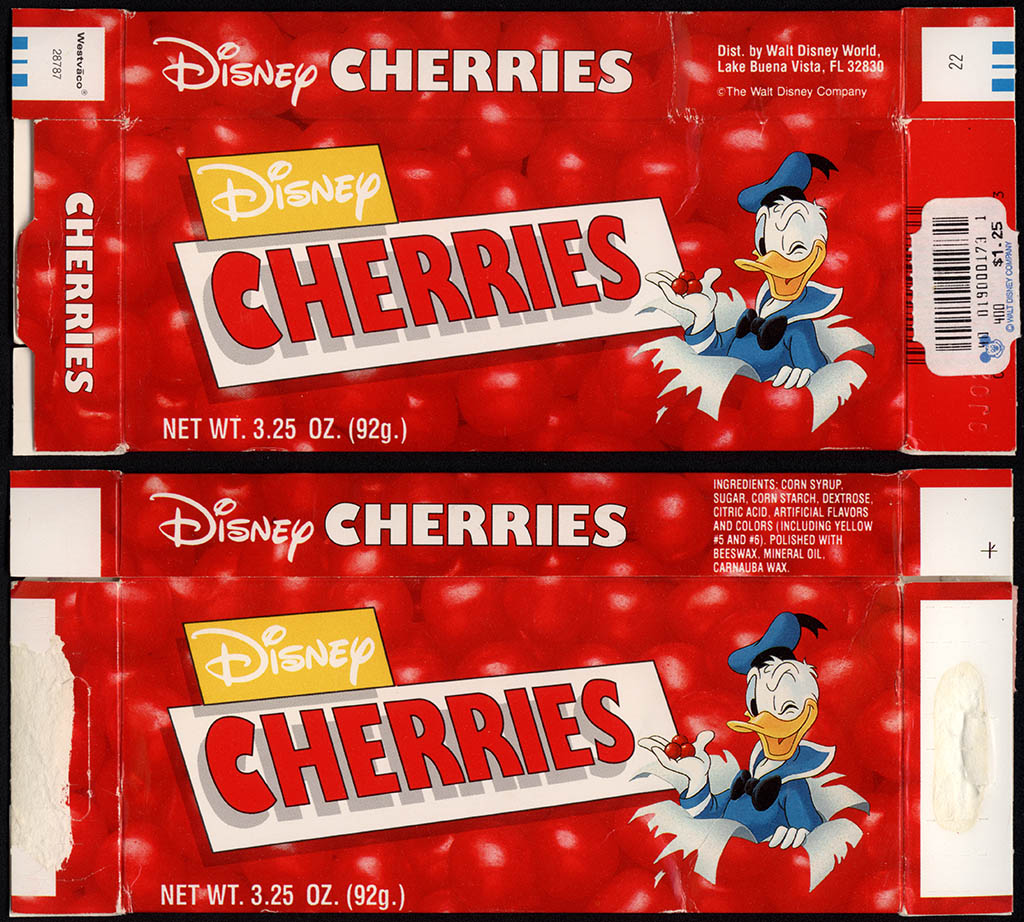 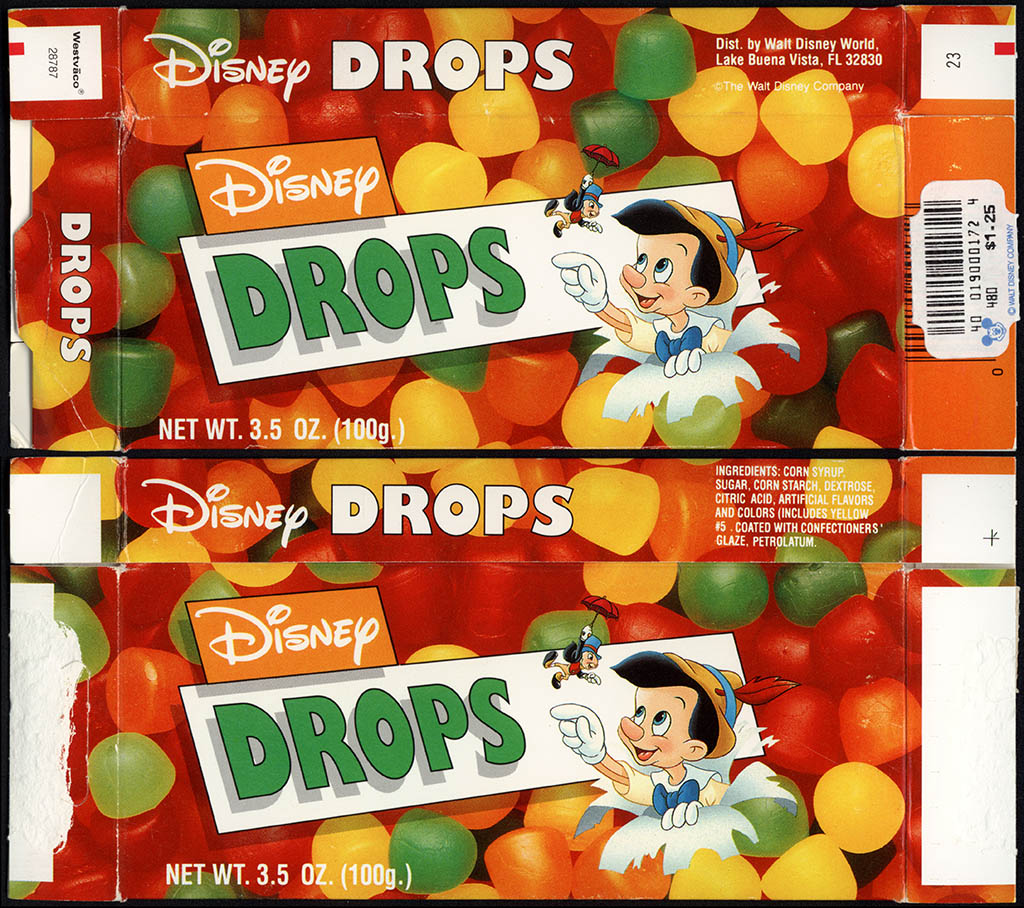 The next piece I have from Walt Disney World is a wrapper from 1993.  It features a “Mickey’s Candy Company” branding which must have been carried across a number of different products, though I only have this one: 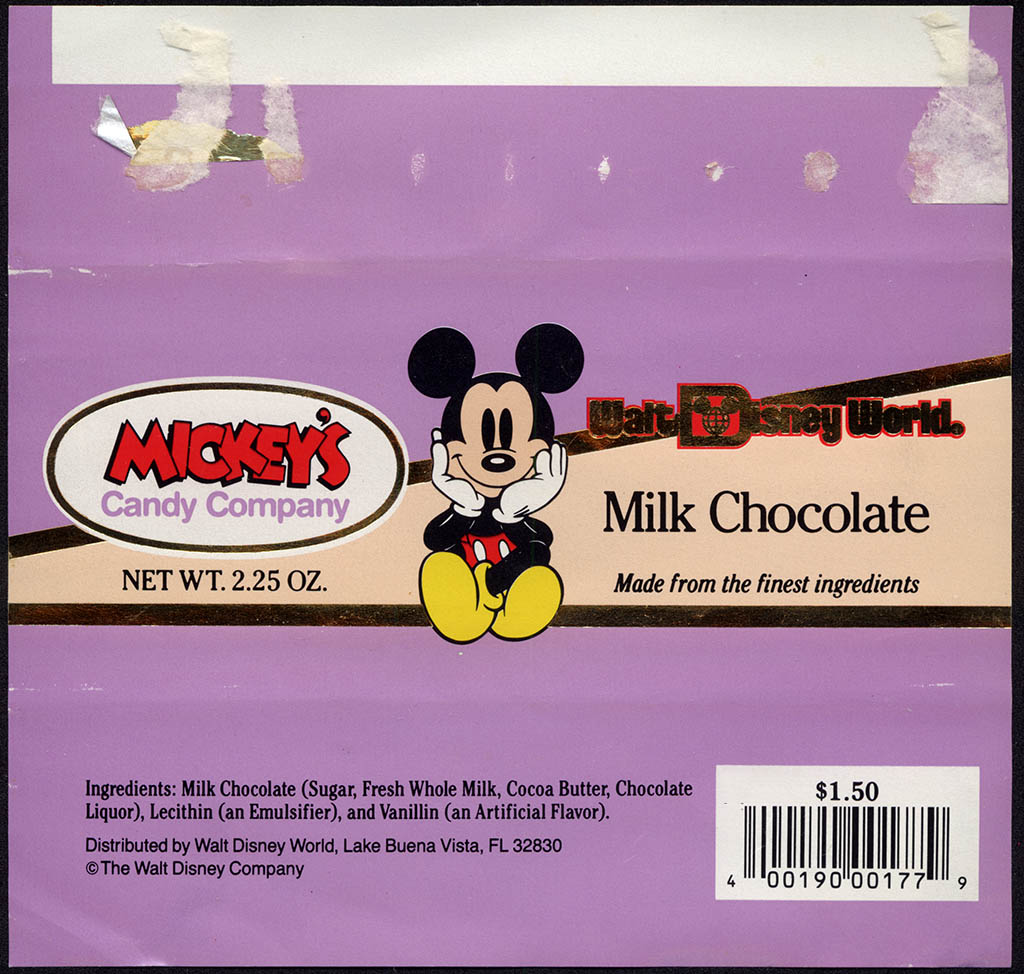 Those are the vintage pieces I have that originated from Walt Disney World in Florida, but I also have some great pieces from opposite coast and the Disneyland location.  The first is one of my favorites, a striking green chocolate bar wrapper most likely from the 1970’s: 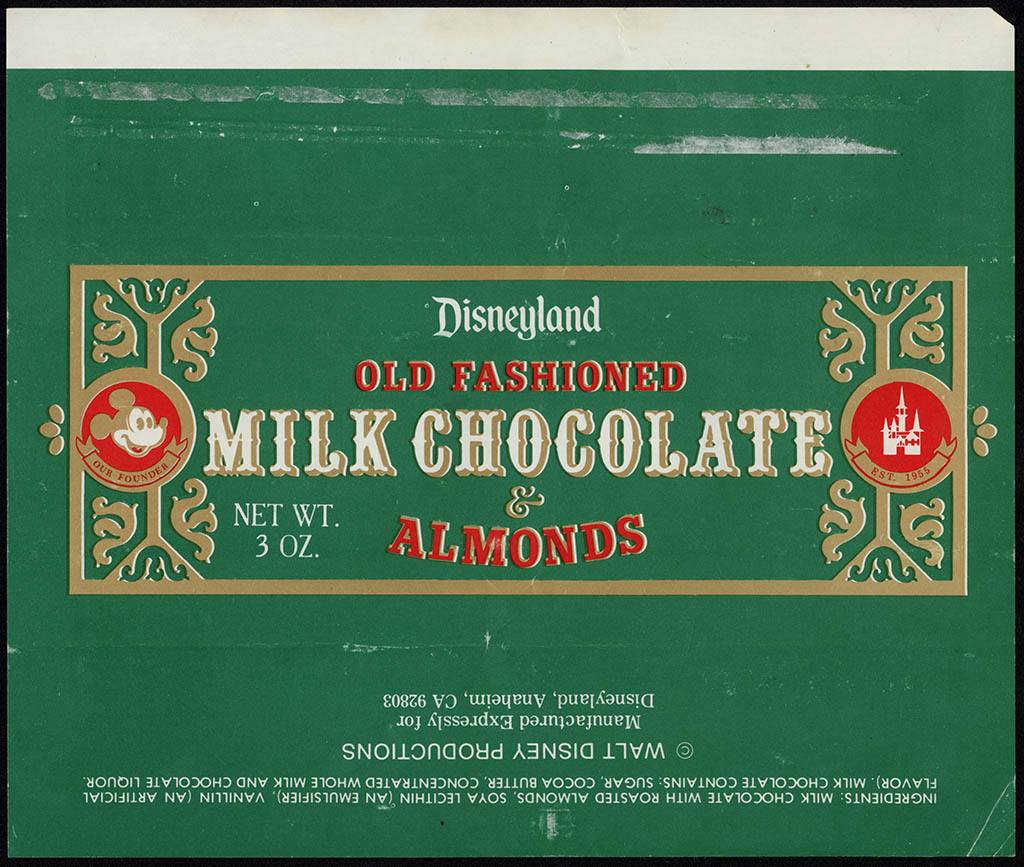 A popular treat at Disneyland in the 1970’s was a chocolate-covered Frozen Banana, which is probably more a dessert than a candy, but it’s certainly worth including.  I’ve got two different eras of Disneyland packaging for this one. 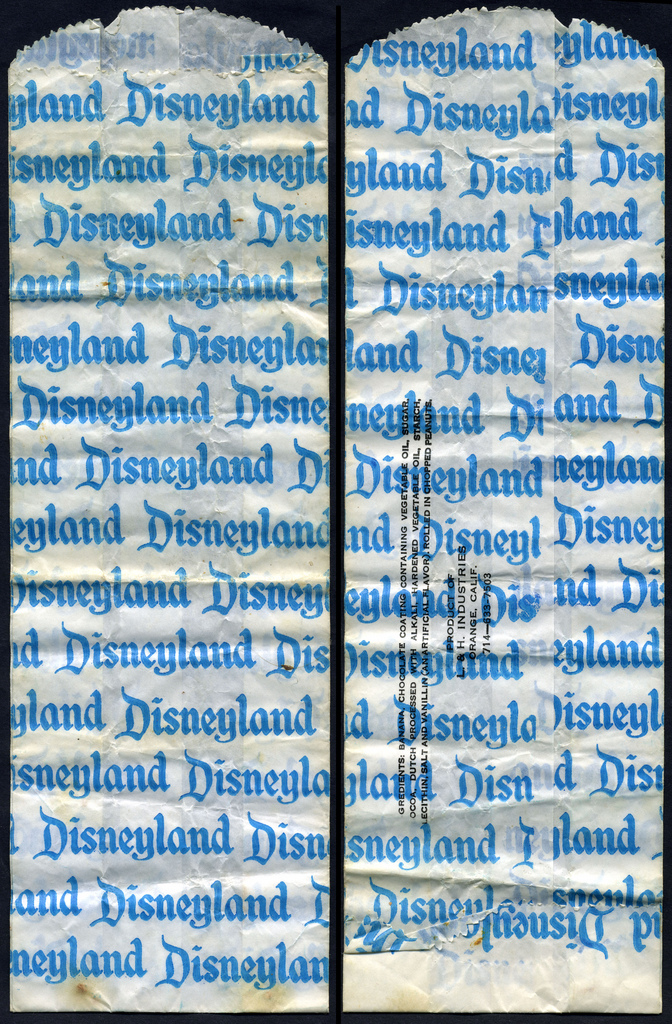 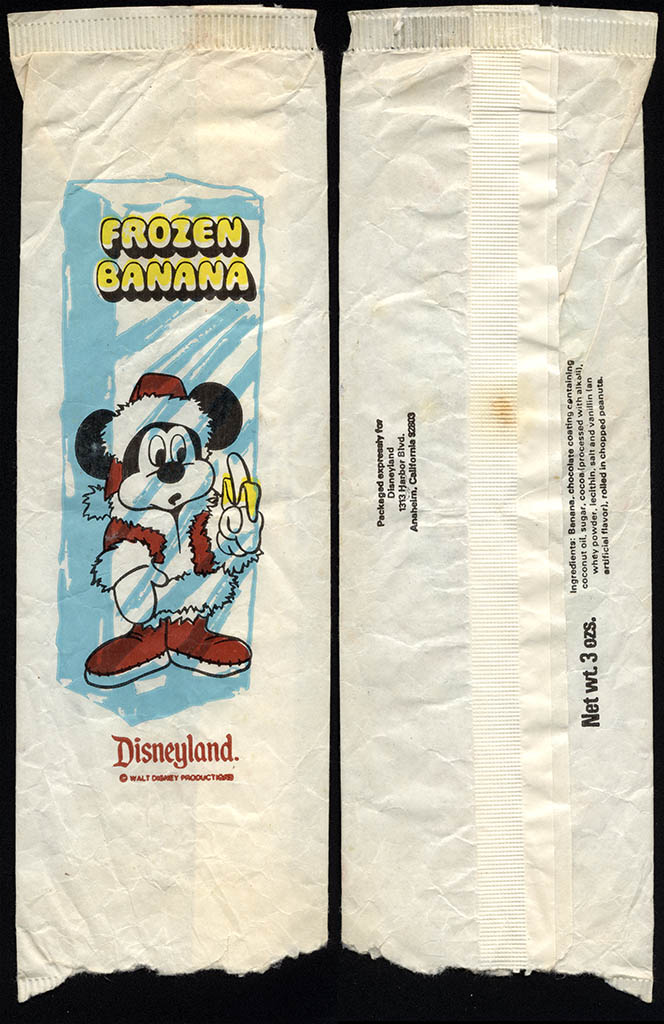 Next up are a pair of cello packages for more old-fashioned candy offerings salt-water taffy and an almond fudge: 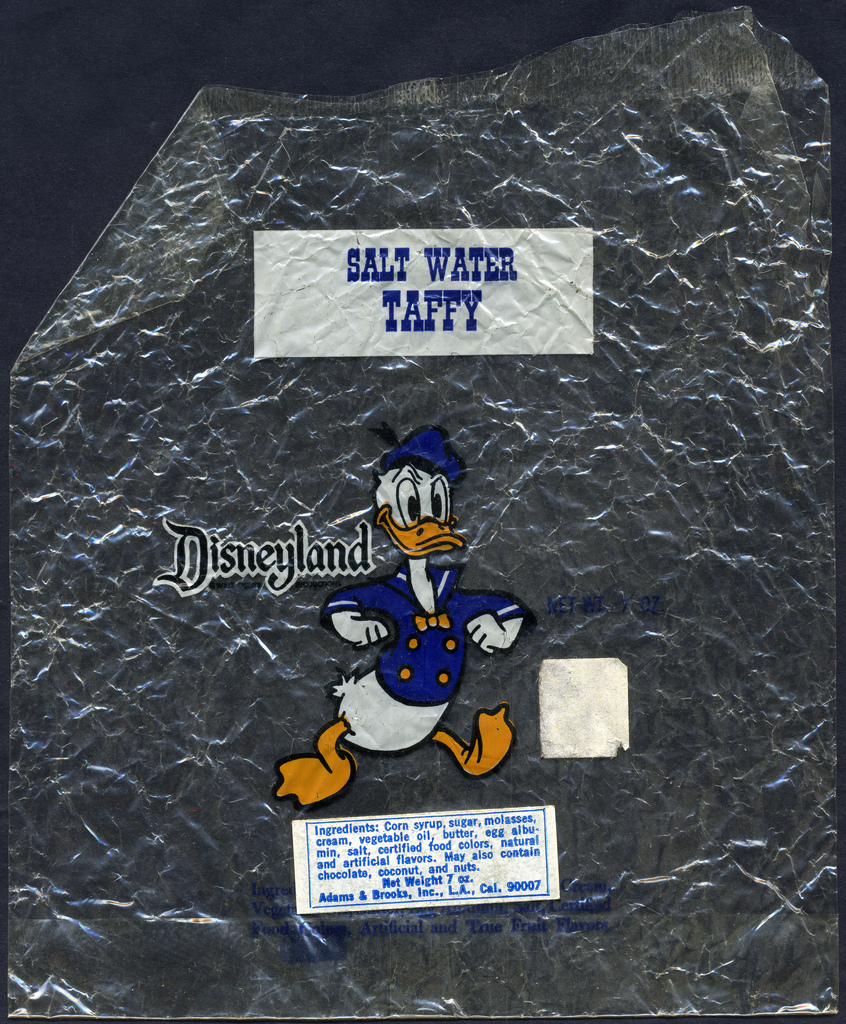 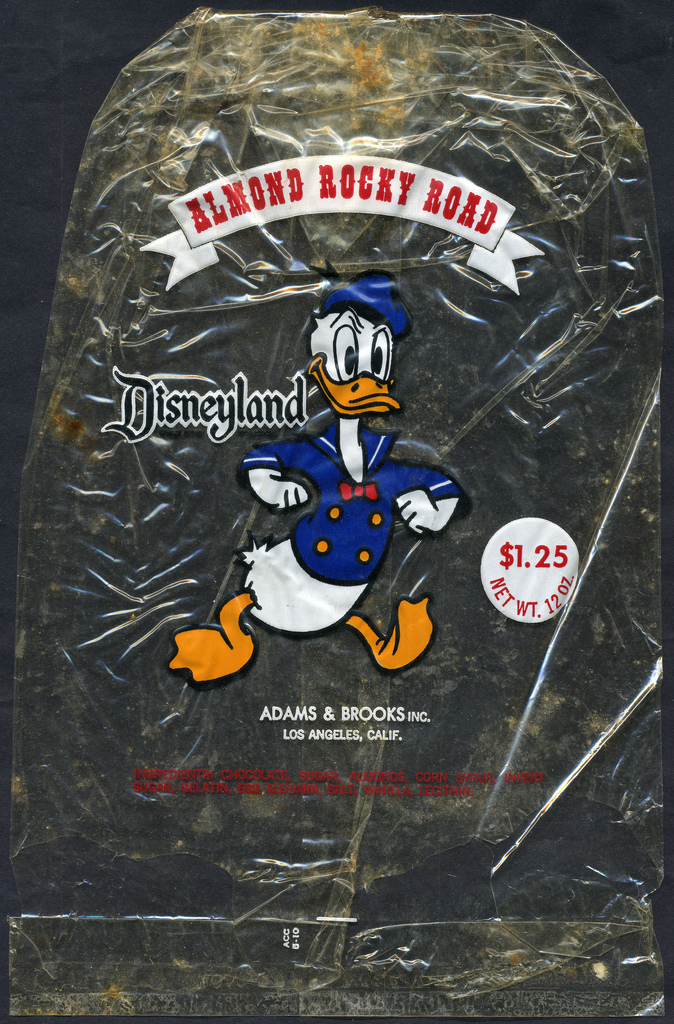 This next package doesn’t appear to be for a specific candy or snack product, but it’s awfully pretty.  My guess is that it once held nuts or some kind of bulk candy offering: 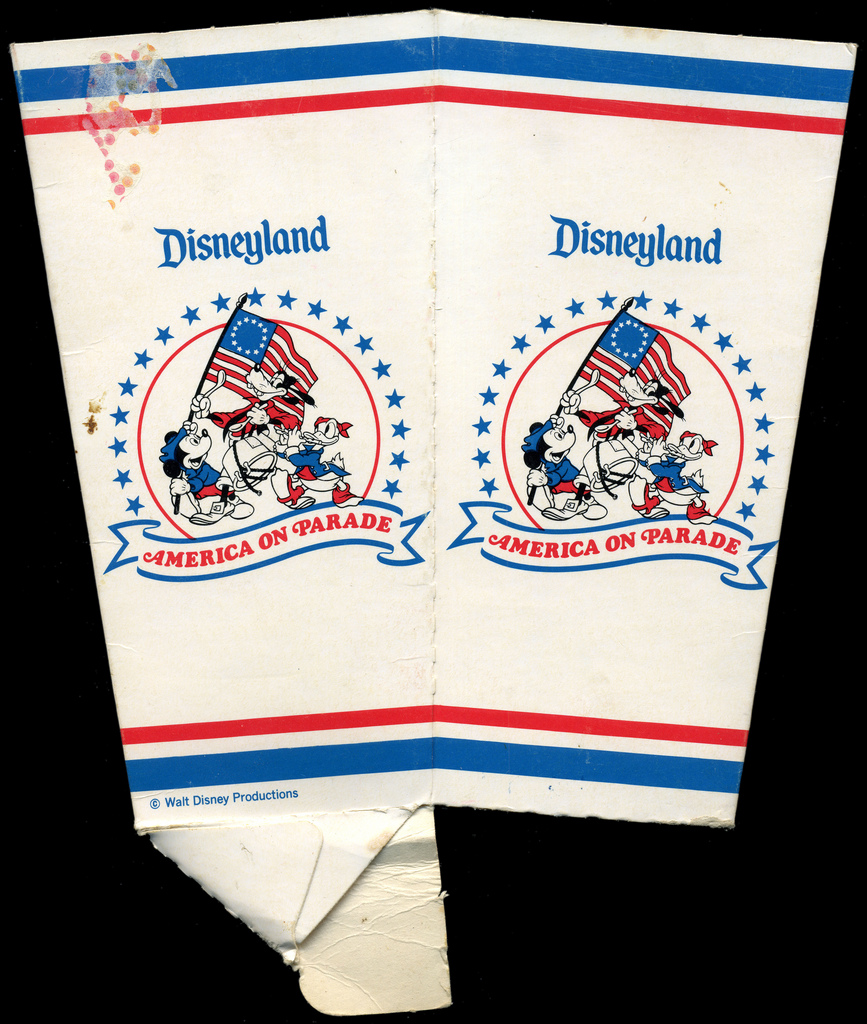 So that’s all of the VINTAGE candy packaging I’ve got from the parks, but it isn’t everything I have to share today.   The origins of today’s post actually come from some brand new Disney Park candy packaging I only recently received – just two weeks ago in fact.

You see, my youngest niece is a dancer in high school and she performed in the Capital One Bowl half-time show on New Year’s Day this year.  It’s something she’s been working towards for over three years, with lots of training and lots of fund-raising.  It was exciting for her and exciting for all of us back in Nebraska watching the half-time show on television.

Her mother accompanied her on that trip and one of the many cool things they got to do was visit Walt Disney World.  So of course I asked them to keep an eye out for any cool Disney-branded candy wrappers.  Though their schedules were packed, they managed to do some hunting for me and brought back four awesome pieces of Walt Disney World candy.

These appear to be Disney Park universal, meaning they are likely the same bars sold in both Disneyland and Walt Disney World.   Here they are:

These next three came bundled in a little souvenir 3-pack: 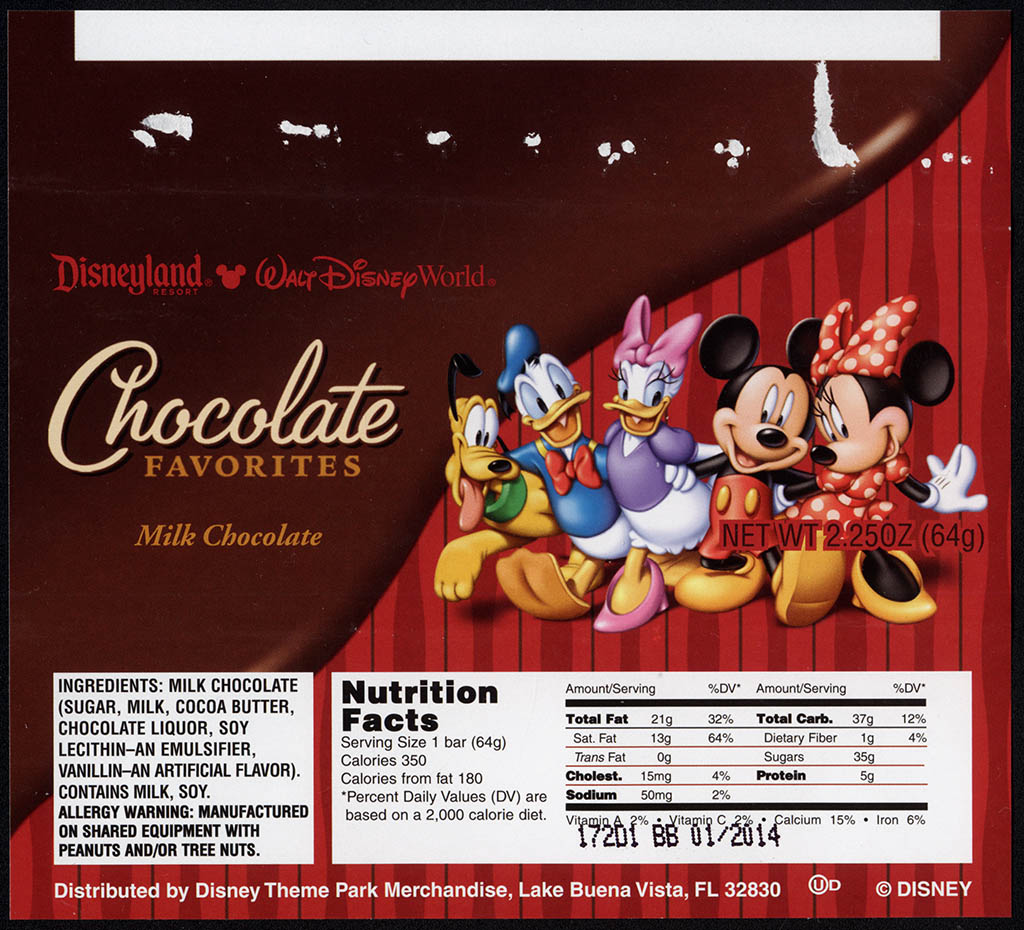 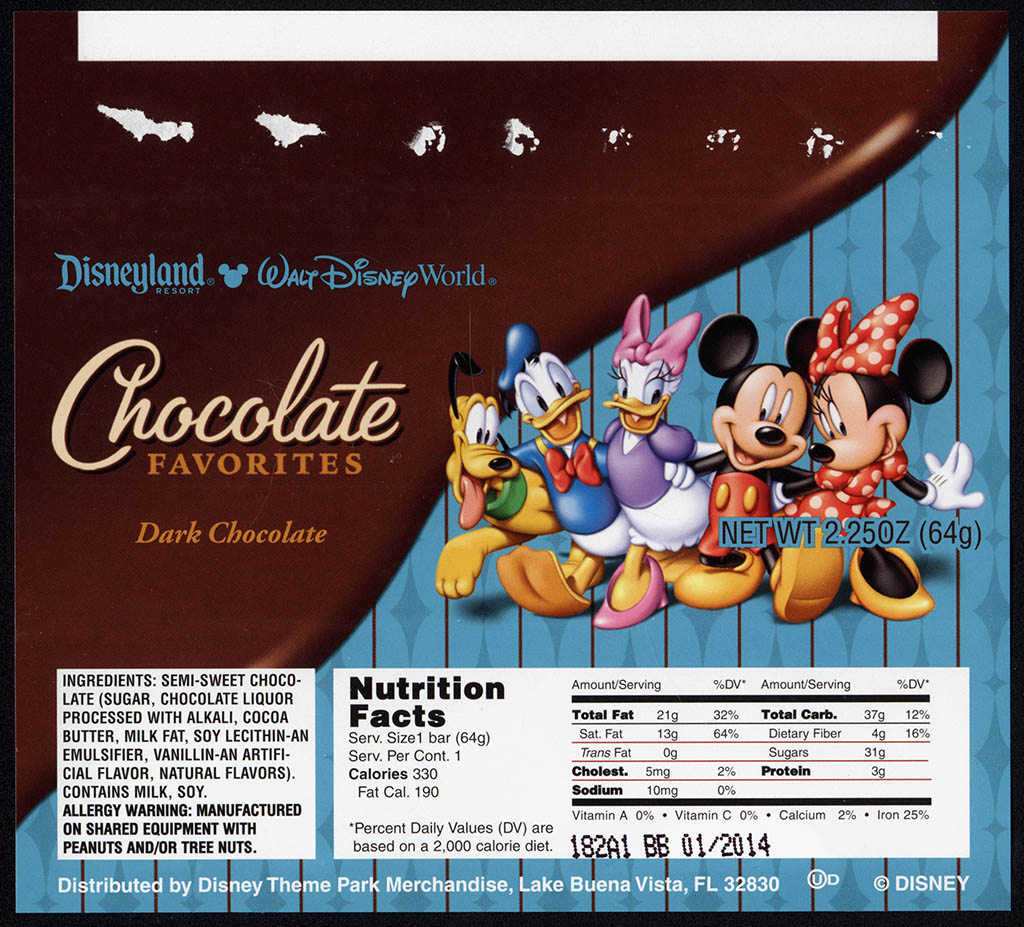 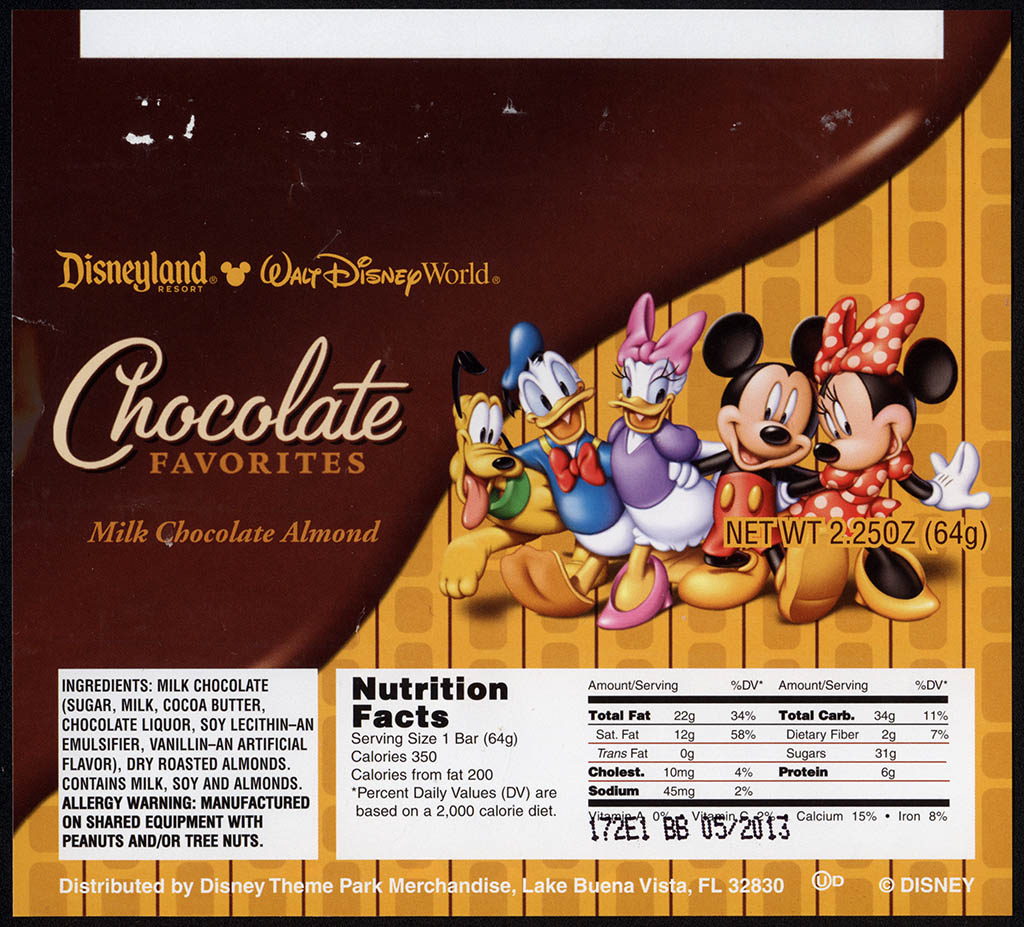 And that’s everything I’ve got for Disney Park candy wrappers and boxes in my own collection.  But there’s still more!

I have a great pair of friends who both blog about candy (independently of each other) and they’ve both captured some really cool Disney park-exclusive candy products from recent years.  I’d like to share a few of those with you.

The first batch are from my good pal Sera, of The Candy Enthusiast site: 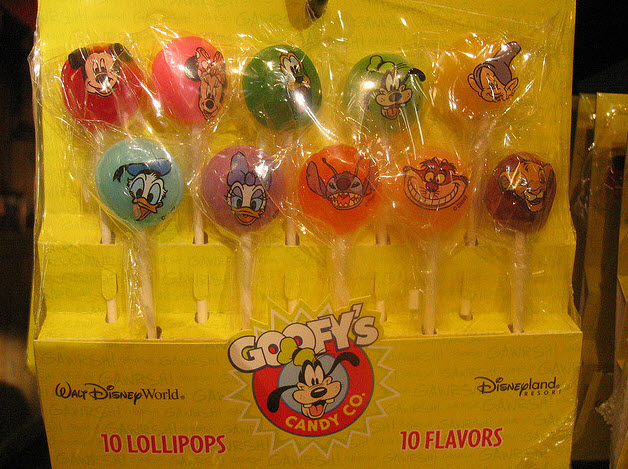 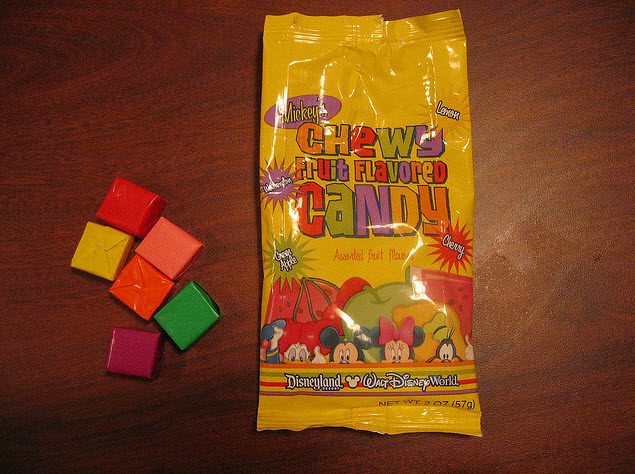 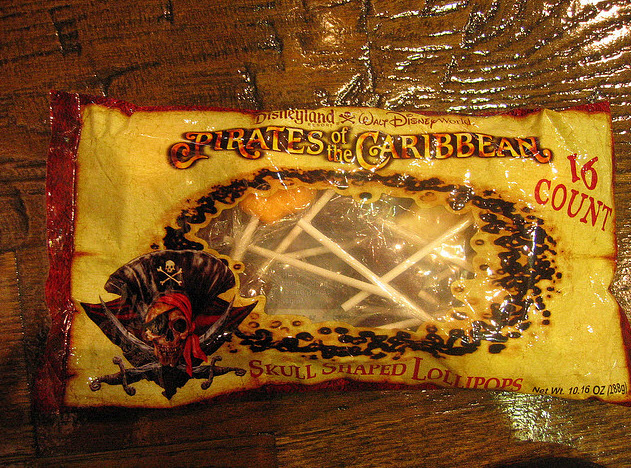 And finally, my favorite of the pieces Sera captured.  This wrapper is awesome:

Back in 2007 my friend Cybele did a fantastic write-up of Disney Park-exclusive candy on her amazing Candyblog site.  You can check out her Disney candy write-up at this link, but I wanted to share a few highlights from her post here – these are yet more cool Disney Park exclusive wrappers: 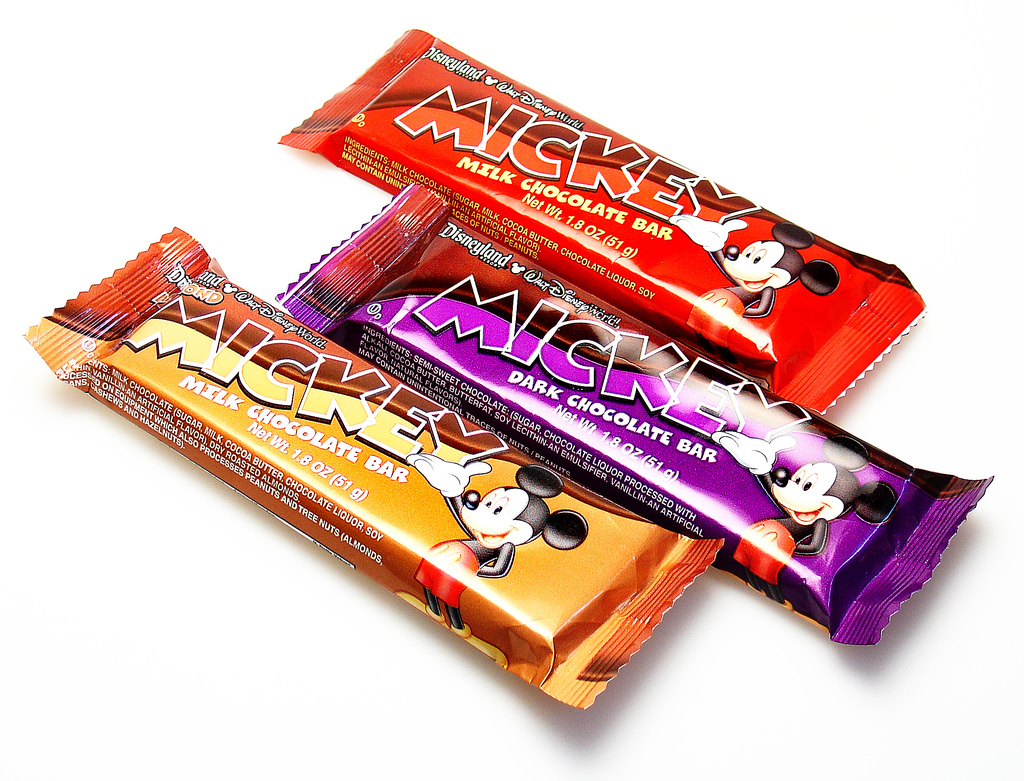 And finally, a fantastic package for Mickey Mouse Coconut Patties.  This one has such a great retro-look to it:

Though I’ve already got a great assortment of Disney Park candy packaging, just seeing the pieces that Sera and Cybele captured makes me want to track those down for my own collection!  Boy are those pieces cool!

I hope you’ve enjoyed checking out all of this great candy packaging that you could only ever find in Disney’s theme parks.  I’ve no doubt that a lot of these may have survived, becoming sentimental souvenirs of magical family trips, and tucked into scrapbooks all over the world.

There are a lot of gaps in today’s post, so I’m sure I’ve missed all kinds of Disney Park candy packages released over the years.  If you’ve got any Disney candy packaging you saved as a souvenir during a visit to one of the parks, shoot me a picture of it and drop me a line – I’d love to see what you’ve got!

This has already been a really long post, but I’ve got one last group of things to share with you today; a selection of beautiful vintage souvenir store bags from Disney parks.  These might have contained candy bars, or they might have contained miniature license plates,  patches, buttons, t-shirts or any of the other myriad goodies you can get at the parks.

These bags are works of art in their own right.  I hope you dig ’em. 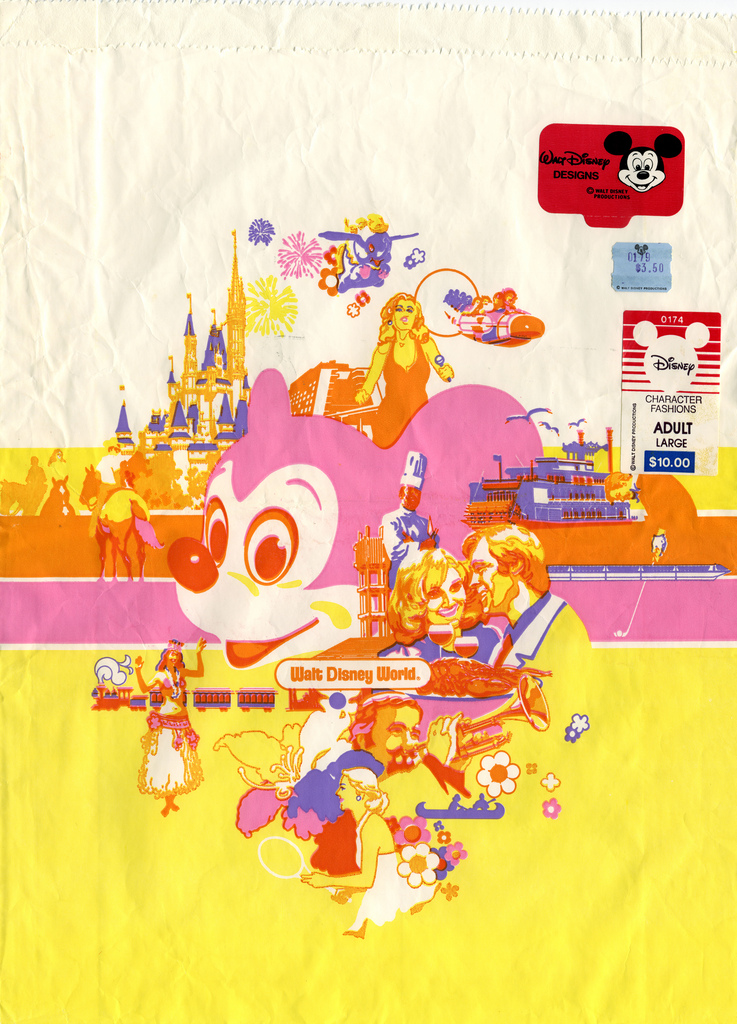 Although it’s difficult to make it out, the style of this final bag is actually pictured in my childhood Disney World vacation photo at the top of today’s post.   If you go back and look carefully, you might be able to make it out. 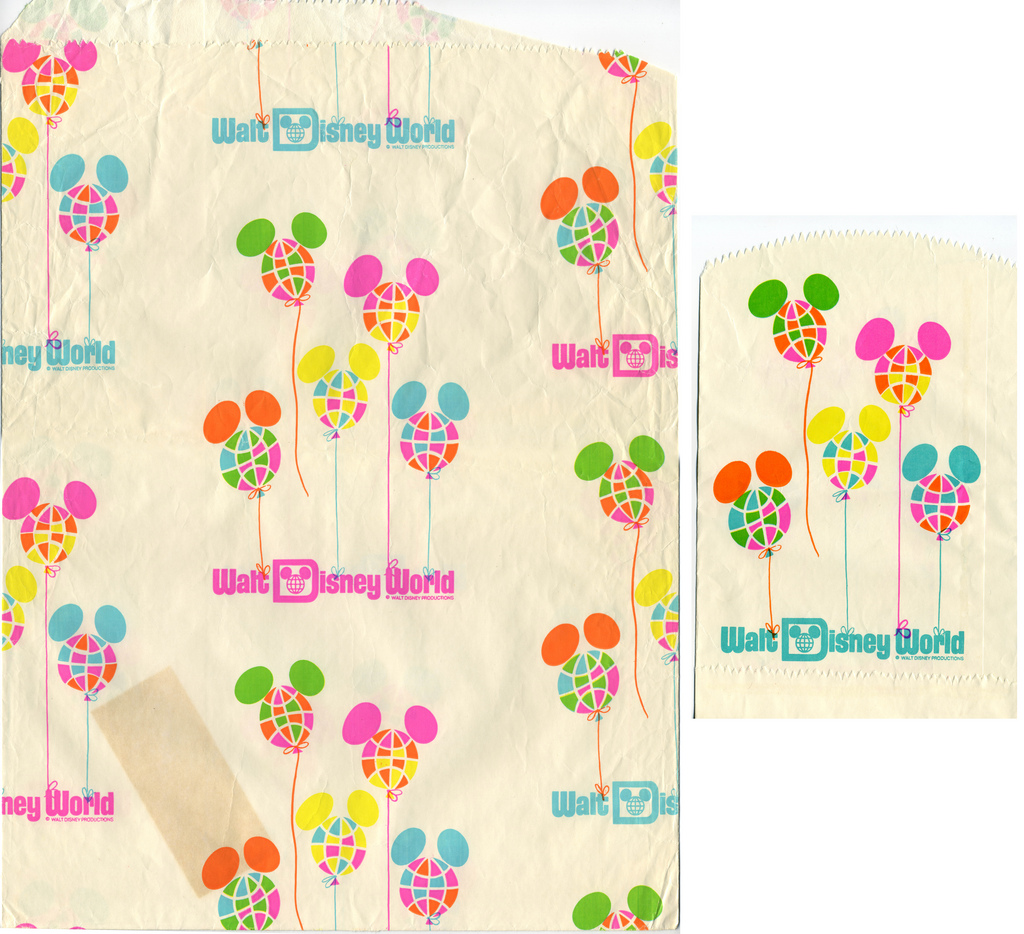 And that’s everything — see ya next time!

A New York City based writer, editor and sometimes actor. After spending much of the 1990′s in the comic book business helping tell the stories of Marvel Comics’ X-Men as series editor, he has since split his time between developing his own entertainment properties while still consulting and working on others. Having been described as “the Indiana Jones of lost and forgotten candy”, Jason is one of the country’s premier candy collectors and historians with his discoveries appearing in countless blogs, magazines, newspaper articles, and books. Always happy to share his knowledge and unique perspectives on this colorful part of our popular culture, Jason has consulted with New York’s Museum of Food and Drink and has also been a featured guest on Food Network’s Heavyweights, France’s M6 Capital, and New York’s TheActionRoom.com. My Google Profile+
View all posts by Jason Liebig →
This entry was posted in 1970's, 1980's, 1990's, Chocolate, Hard Candy, Wonka and tagged 1970's, 1980's, candy collecting, candy collection, candy collector, candy wrapper collection, candy wrapper collector, collectible, collecting candy, confectionery, confections, Disney, Disneyland, licensed, packaging, sweets, theme park, vintage candy wrapper, Walt Disney World, wrapper. Bookmark the permalink.