I returned to New York last night after spending nearly three weeks away visiting friends and family for the holidays.  While away I had planned to post regularly to this site, but I have to admit that it was tough to squeeze CollectingCandy time in while spending time with loved ones, and the loved ones won out.   Now that I’m back, I’m ready to share a lot of great new (and old) candy stuff with you.   I figured I’d start back with something from a far off land.

I’ve written about my New Zealand collector-pal Steve Williams before in a previous post and I’ve also written about Sweetmans Zombie Chews before, so some of today’s entry may sound familiar.  Recently, Steve set out to gather the latest range of Zombie Chews product for me.   Scouring a number of his local stores he was able to procure the goodies shown in today’s article and ultimately ship them to me here in the USA.  The package he sent included a few Zombie Chews flavors I’d never seen as well as a brand extension I’d never come across before: Zombie Chewy Tape.

Without the friends I’ve made online I might never even know about cool products like Zombie Chews, which makes me so grateful for those friends who generously help me out in adding these international items to my collection.  Today I’ve got a pretty groovy assortment of candy goodies from the other side of the globe to show – so let’s get to them!

As you’ve noticed, each Zombie Chews flavor features a unique mascot and color scheme – it’s a great way to differentiate the line.  The last of the seven flavors I’m sharing today features a female zombie mascot:

Next up are the two boxes for Zombie Chewy Tape that Steve found and sent to me.  These appear to be a year older than the other pieces: 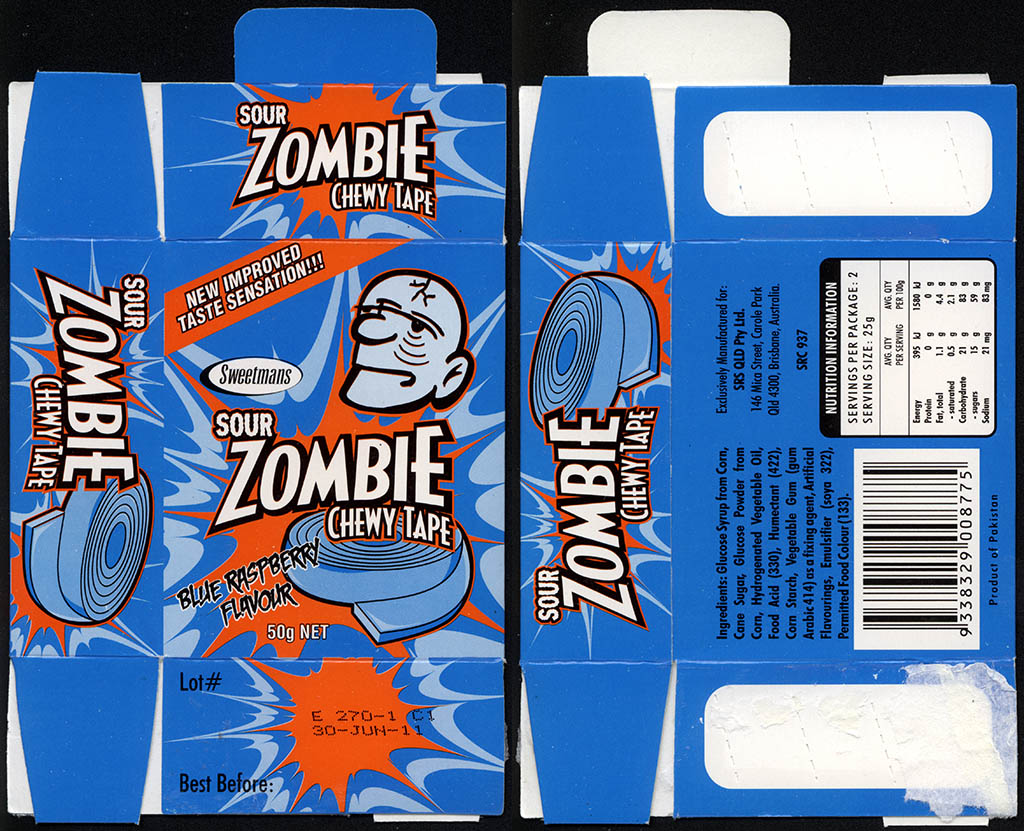 That’s all of them!

These pieces are a great example of the kinds of unusual and awesome things that I could only add to my collection due to my friends around the globe.   Special thanks to Steve in New Zealand for making today’s post possible.

And that’s the everything I’ve got on the current range of Sweetmans Zombie Chews.  I’ll see you next time!

A New York City based writer, editor and sometimes actor. After spending much of the 1990′s in the comic book business helping tell the stories of Marvel Comics’ X-Men as series editor, he has since split his time between developing his own entertainment properties while still consulting and working on others. Having been described as “the Indiana Jones of lost and forgotten candy”, Jason is one of the country’s premier candy collectors and historians with his discoveries appearing in countless blogs, magazines, newspaper articles, and books. Always happy to share his knowledge and unique perspectives on this colorful part of our popular culture, Jason has consulted with New York’s Museum of Food and Drink and has also been a featured guest on Food Network’s Heavyweights, France’s M6 Capital, and New York’s TheActionRoom.com. My Google Profile+
View all posts by Jason Liebig →
This entry was posted in Sour Candy and tagged Australia, Australian, Australian candy, candy collecting, candy collection, candy collector, candy wrapper collection, candy wrapper collector, collectible, collecting candy, confectionery, confections, Down Under, foreign candy, New Zealand, packaging, sweets, vintage candy wrapper, wrapper, zombie candy. Bookmark the permalink.