Here at my family’s place in Nebraska last night we had a nice helping of snow heaped upon us.  It put me in quite the Christmas mood, as did scooping my mother’s driveway and sidewalks this morning (I’m taking a break before I finish – whew!).   The snowfall stopped at 8am, but it had already left more than enough of a holiday-appropriate white covering over the town.  Quite nice.

With that positive holiday vibe fully enveloping me, I thought I’d go back to 1969 for today’s post on Topps’ Christmas holiday lineup from that year.

I’m building today’s entry around this lovely little candy industry trade clipping, which described what retailers and distributors could look forward to from Topps that Christmas season, so many years ago: 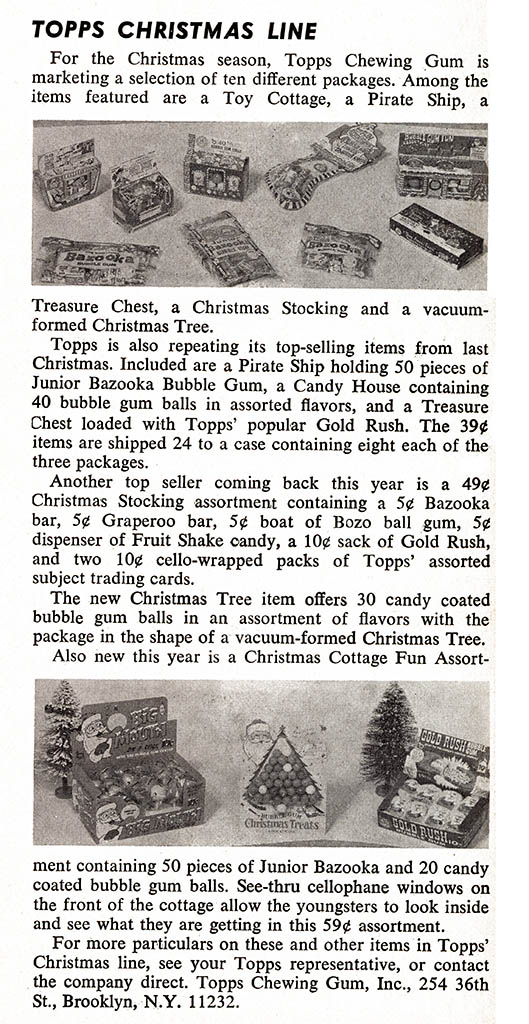 I’m fortunate to have picked up a small selection of pieces featured in these photos over the years, so now I get to share them with you.

First up is the Bubble Gum Fun Assortment box, designed to look like a house with Santa and his reindeer arriving on top: 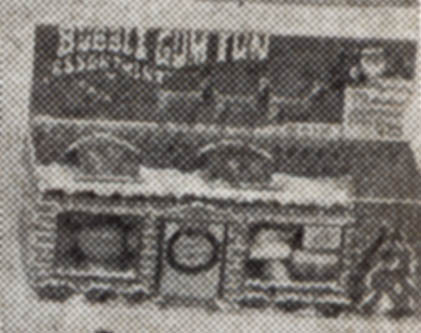 I have a Topps company file proof of this piece, so it’s not folded up like the one in the photo, but with the proof you can get a great look at the graphics and can imagine how it must have appeared loaded with gumballs and pieces of Bazooka gum.  I really love this one: 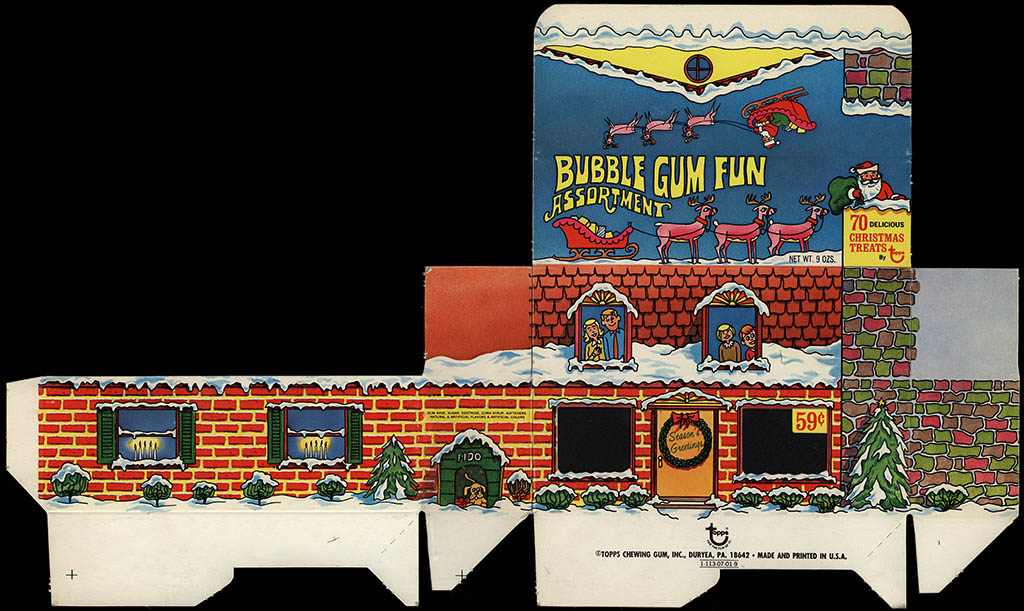 Next up is the holiday edition of one of Topps’ mainstay products at the time, Big Mouth-on-a-Stick.  Big Mouth was a brand of Topps jawbreaker, which they turned into the aptly named lollipop by simply adding a stick to them.  I have an unused box flat for this one in my collection as well: 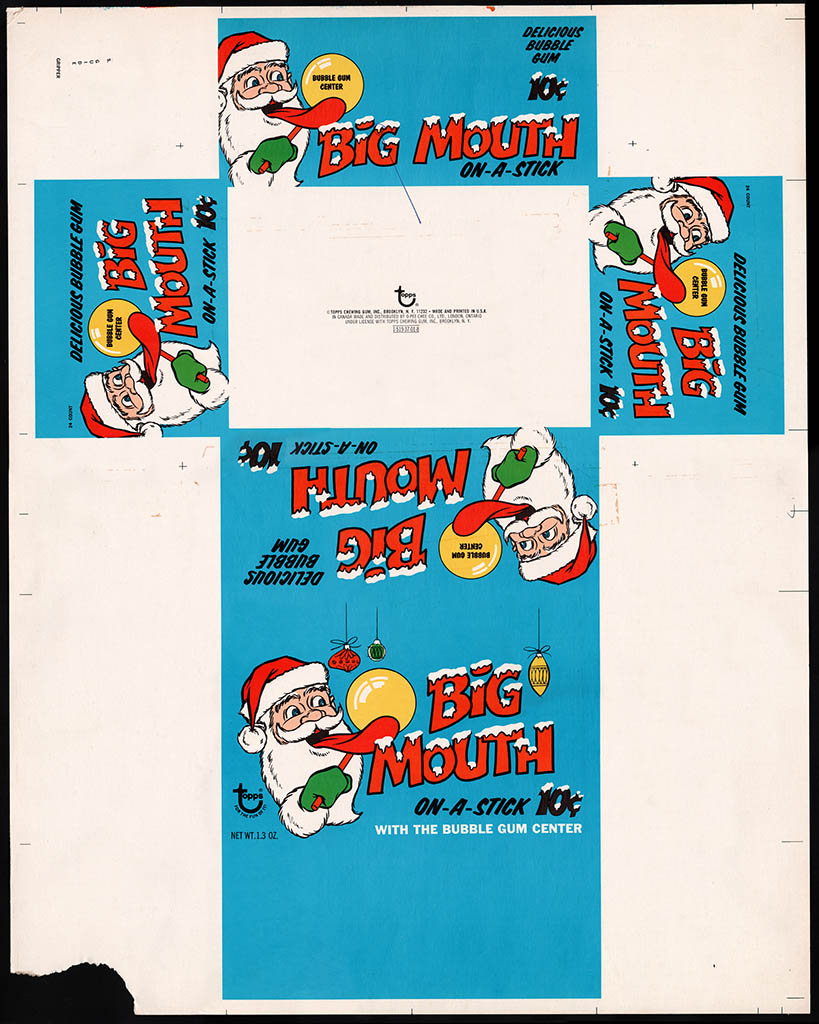 Following is a piece that I’m particularly enamored with and interested in, as I’m a big fan of Topps classic Gold Rush bubble gum product.  This is a Christmas edition of the standard Gold Rush Gum.  If you look closely at the photo from the trade clipping, it would appear that the Gold Rush bags have a Santa Claus printed graphic or sticker upon them: 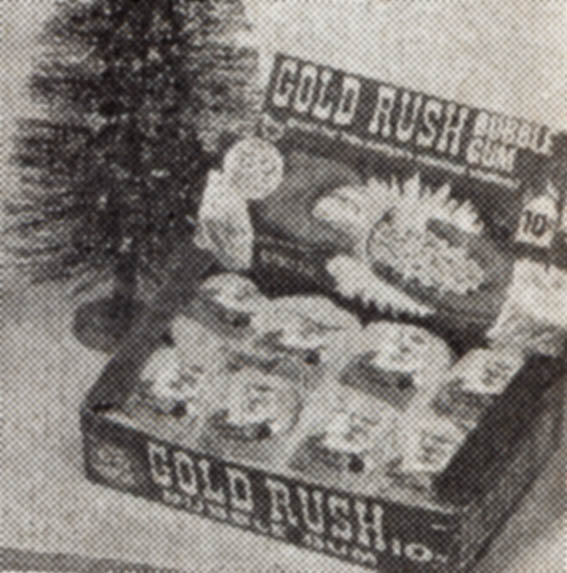 I’ve never come across those Santa-branded Gold Rush bags.  In fact, the only evidence that I have of  their existence is this blurry image, so I would love to find one some day.  For now, I’m happy to have an unused flat of the Christmas-themed Gold Rush  display box they came in: 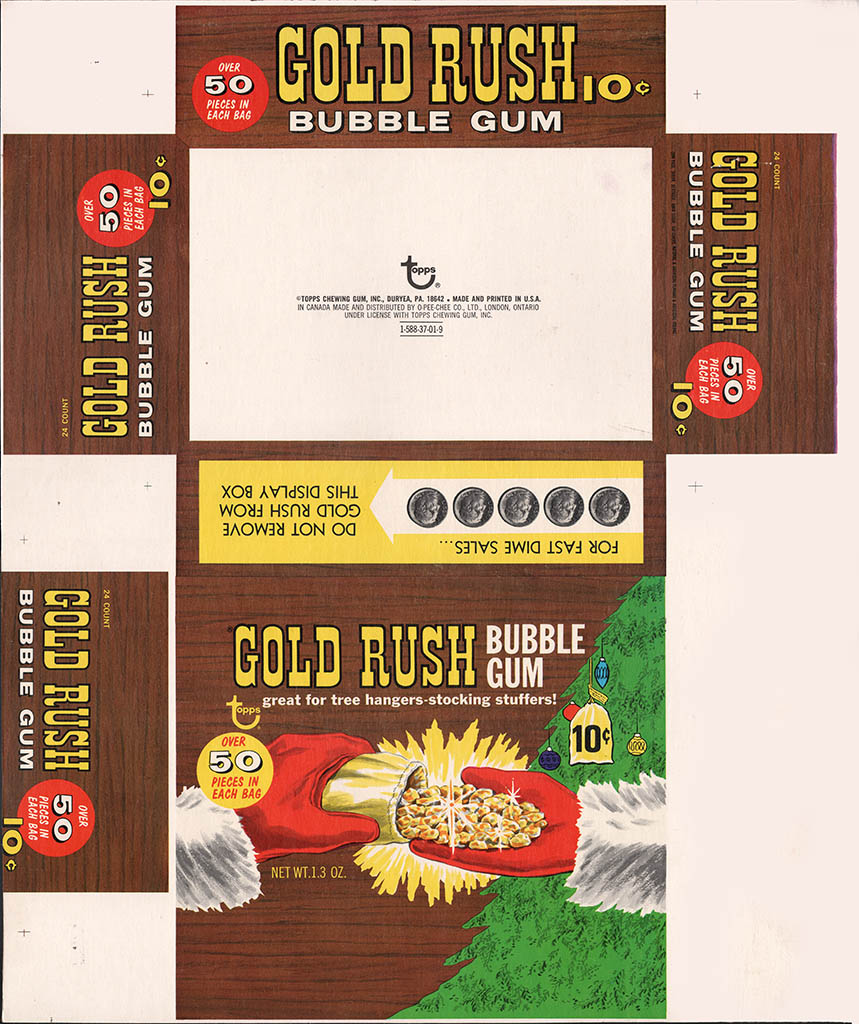 The last piece I have to share today doesn’t come from my own collection, but that from my good pal and fellow collector, Dan Goodsell.  It’s a piece I never really associated with Christmas due to its pirate theme but since it was included in Topps’ announcement, it appears that they marketed it for the 1969 Christmas season.

It’s one of the most spectacular Topps Gold Rush pieces I’ve ever come across, and it’s a beauty: 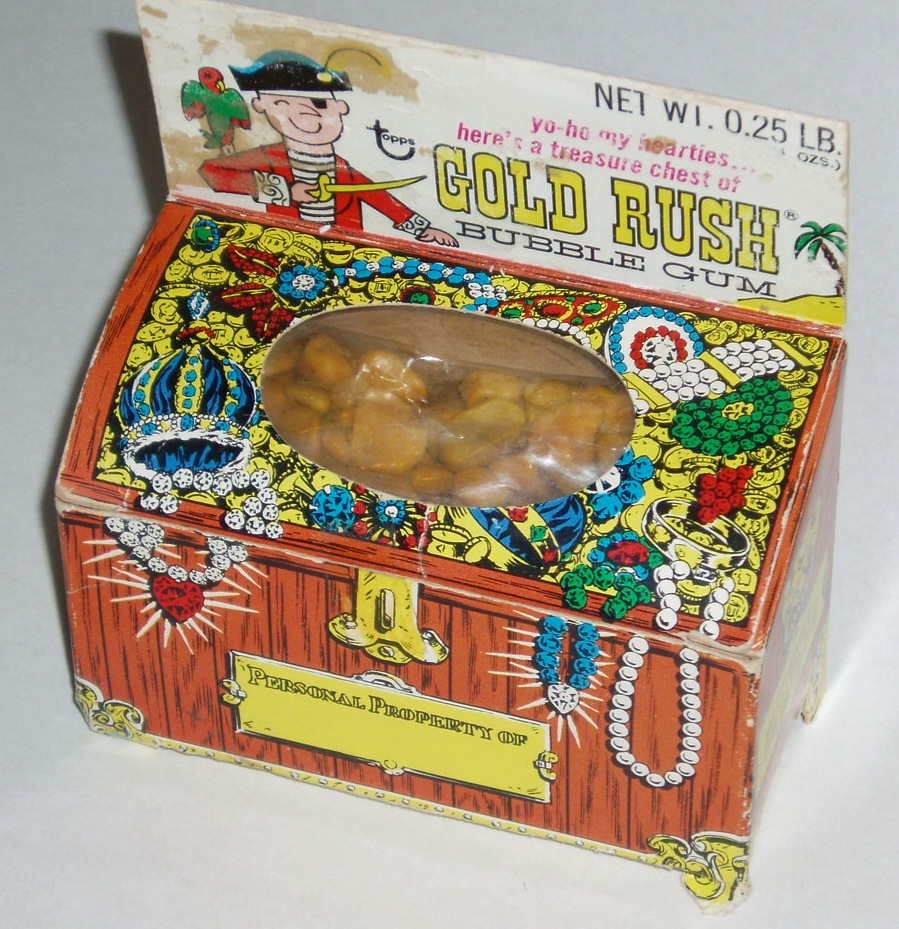 With that, I’ve wrapped up my coverage of Topps’ 1969 Christmas lineup!  I hope you’ve enjoyed this peek into the past of one of the great bubble gum and confectionery brands, a brand that is still going strong today.

I’ve got some more shoveling to do, so I’m going to suit-up and head out to face the snow.    But drop back by over the next several days as I’ll have daily Christmas-themed posts going up right through Christmas Day. 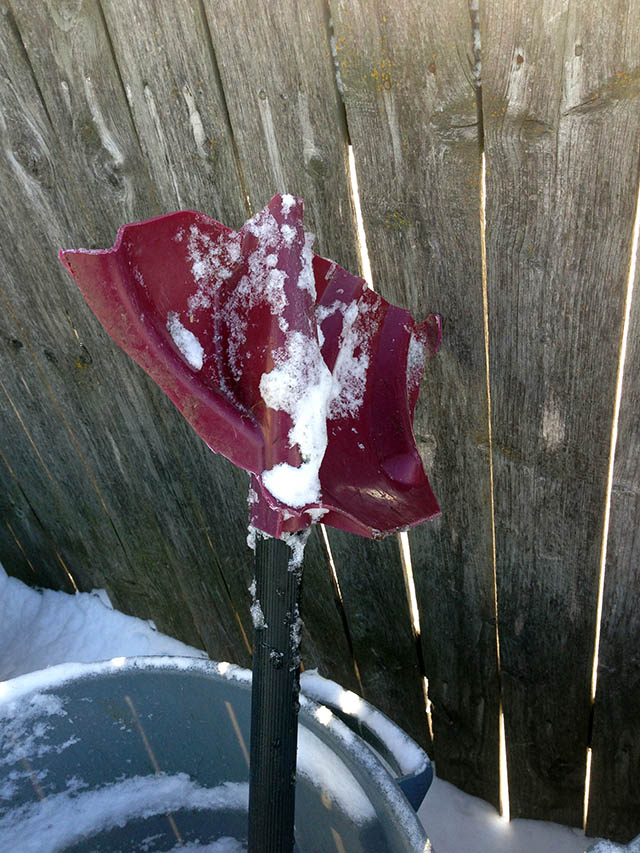 A New York City based writer, editor and sometimes actor. After spending much of the 1990′s in the comic book business helping tell the stories of Marvel Comics’ X-Men as series editor, he has since split his time between developing his own entertainment properties while still consulting and working on others. Having been described as “the Indiana Jones of lost and forgotten candy”, Jason is one of the country’s premier candy collectors and historians with his discoveries appearing in countless blogs, magazines, newspaper articles, and books. Always happy to share his knowledge and unique perspectives on this colorful part of our popular culture, Jason has consulted with New York’s Museum of Food and Drink and has also been a featured guest on Food Network’s Heavyweights, France’s M6 Capital, and New York’s TheActionRoom.com. My Google Profile+
View all posts by Jason Liebig →
This entry was posted in 1960's, 1970's, Christmas, Holiday, Topps and tagged candy collecting, candy collection, candy collector, candy wrapper collection, candy wrapper collector, collectible, collecting candy, confectionery, confections, packaging, sweets, vintage candy wrapper, wrapper. Bookmark the permalink.