Peter Paul’s “No Jelly” – An oddly-named offering from the 70’s.

Back in 1972 the Peter Paul company, best known for their Mounds and Almond Joy offerings, released a bar to the market named for what it didn’t include rather than what it did.  The No Jelly bar.

There’s something about the name of this one that makes me think of the classic confectionery-related Monty Python skit “Crunchy Frog” – but I’ll get to that at the end of today’s post.

To say that the name was received as unusual is accurate, and the earliest trade ad for the new bar highlighted as much: 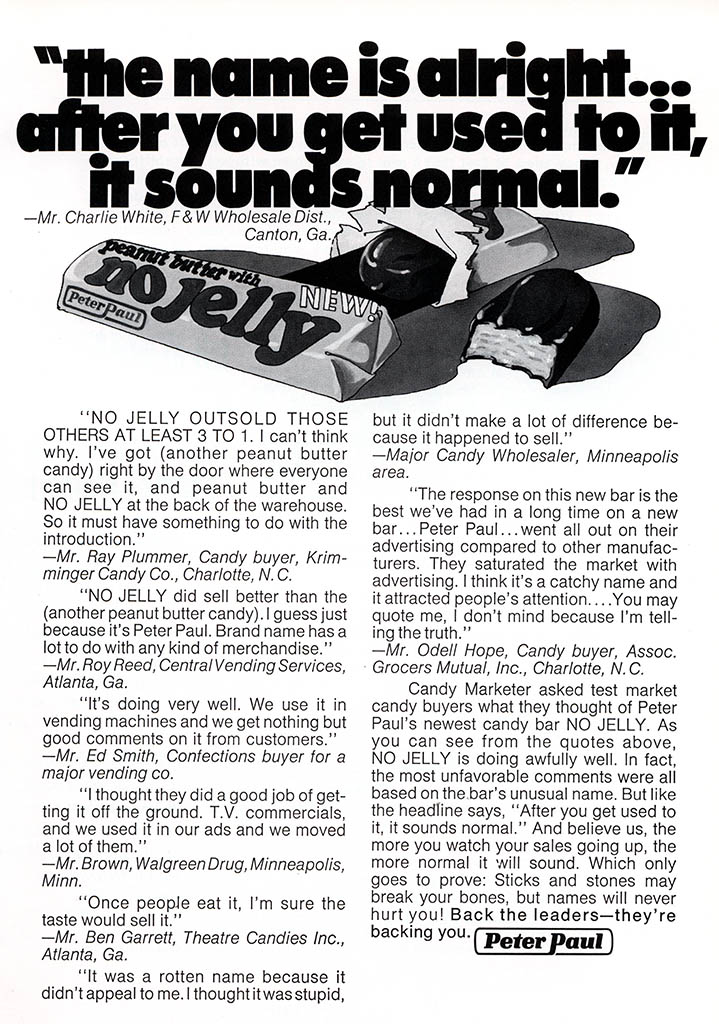 Here’s the earliest No Jelly wrapper I have in my collection: 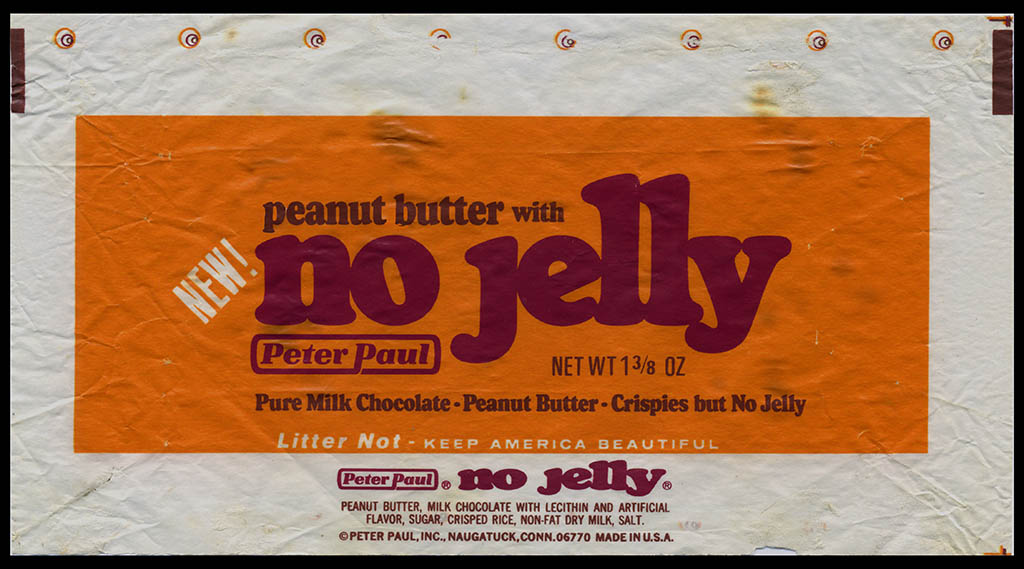 I have some evidence that “No Jelly” was not the only name that the bar was tested with.   I recently uncovered a wrapper for a Peter Paul Sidekicks, with virtually the same logo and wrapper design, while also featuring the exact same ingredients and bar description as No Jelly.  It’s interesting that the placement of the “NEW” call-out on the Sidekicks wrapper matches the one on the No Jelly wrapper in that 1972 trade ad (my earliest No Jelly wrapper doesn’t match the trade ad exactly).  Because of that, it’s my theory that this was an alternative name tried out during the early test market phase of the bar: 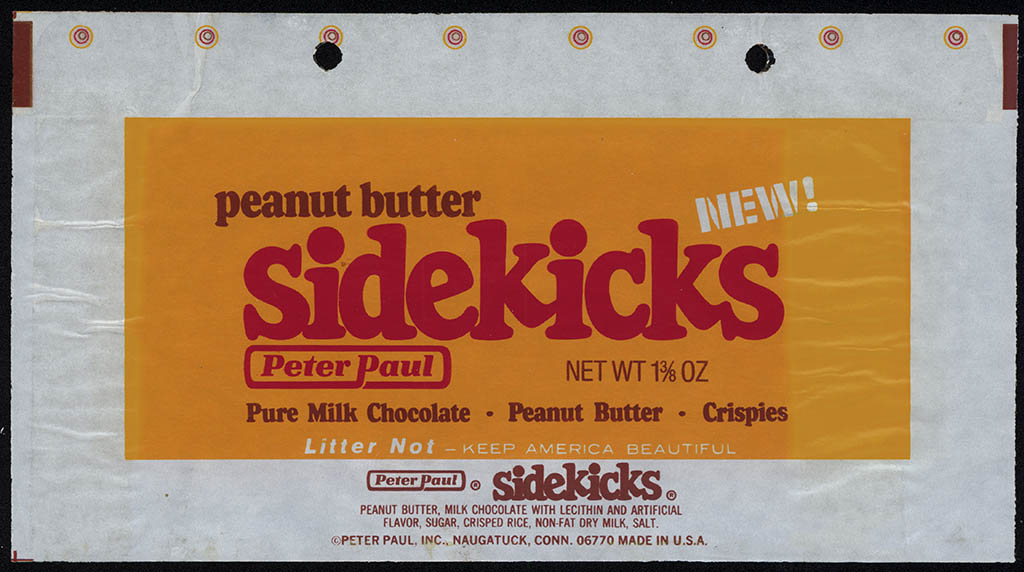 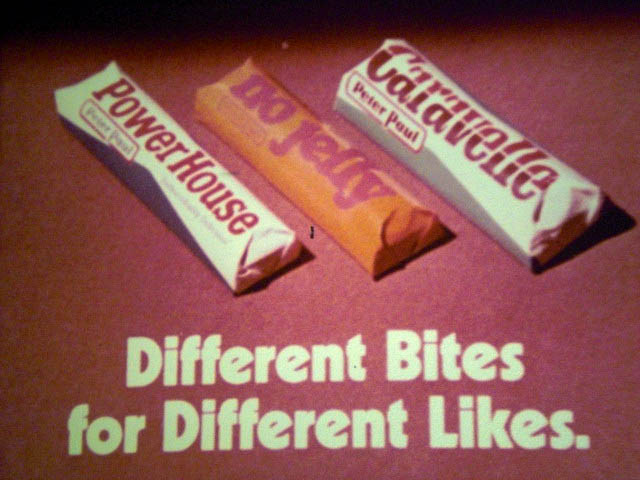 Though it’s not in my collection, I do have an image of a slightly-later No Jelly wrapper, with a 15-cent printed-on price here: 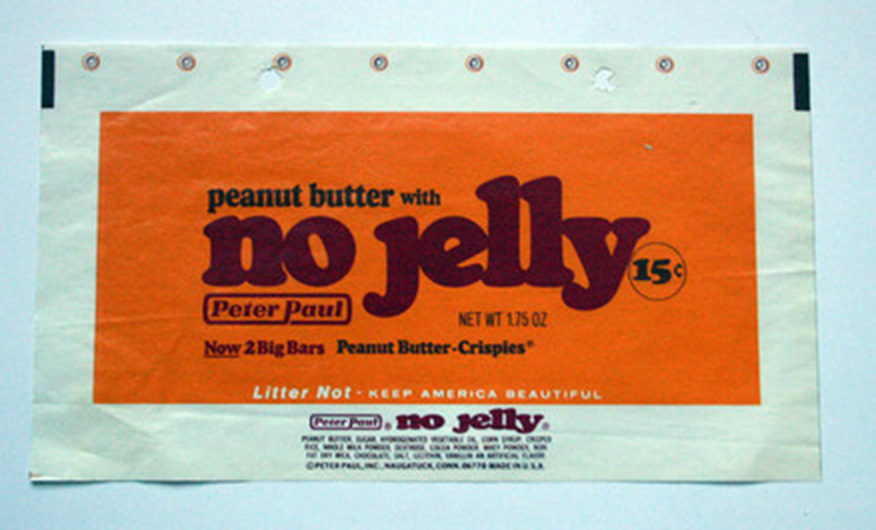 My pal Gregg Koenig also has a couple of early No Jelly items in his collection, so I wanted to include them here: 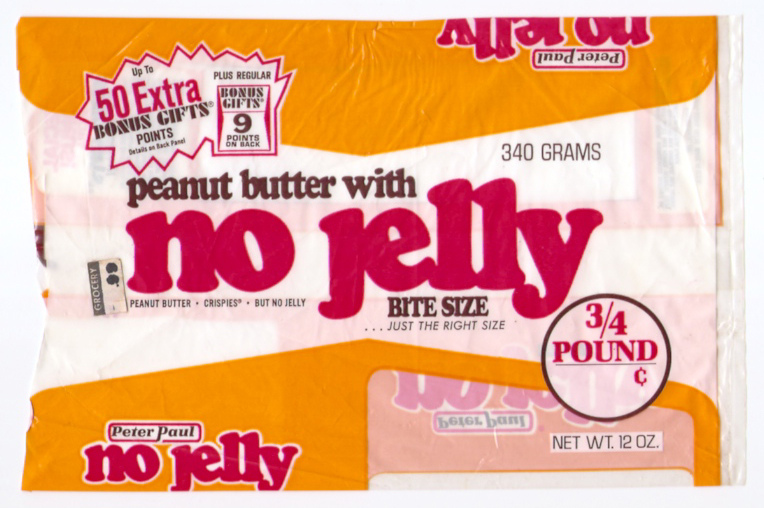 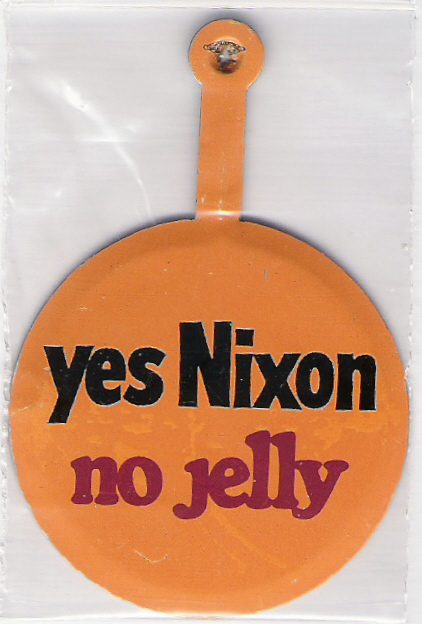 By 1975, No Jelly was still on shelves, but it must have been getting some negative response to the name.  That year, the Peanut Butter part of the logo was made more prominent and the No Jelly, less-so.  I have an example of a cut-down wrapper from that year: 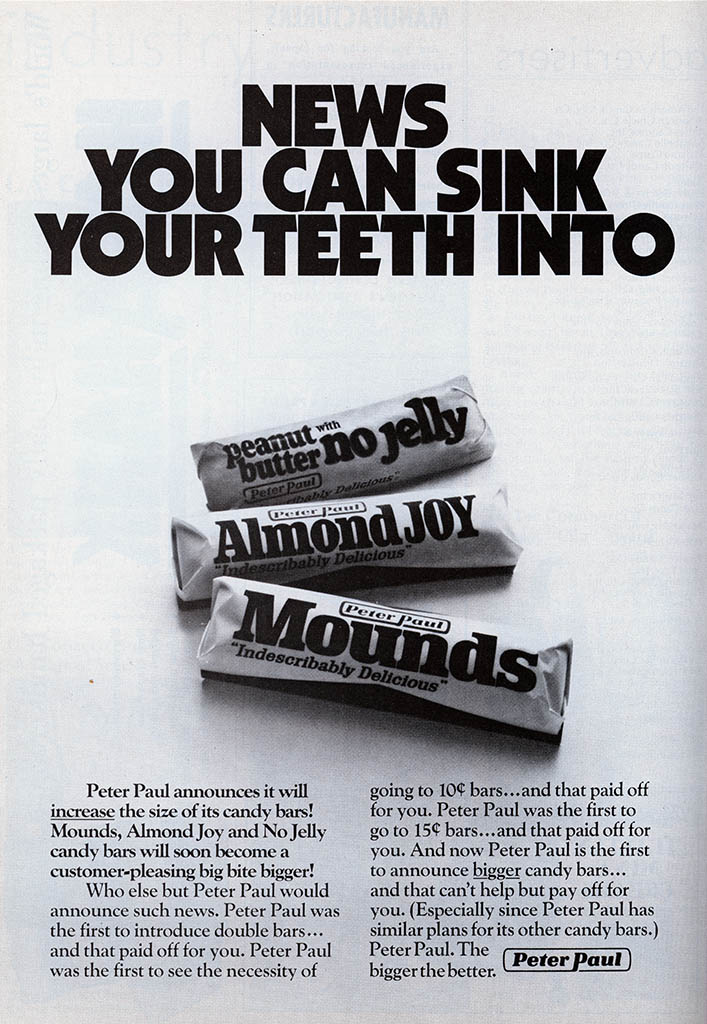 So if the 1975 wrapper re-design revealed that No Jelly’s wonderfully-odd name was losing favor, what followed in 1976-1977 sealed the deal.  By 1977, Peter Paul would still be making this bar, but would retire the No Jelly name – now branding it as the Peter Paul Peanut Butter Bar. 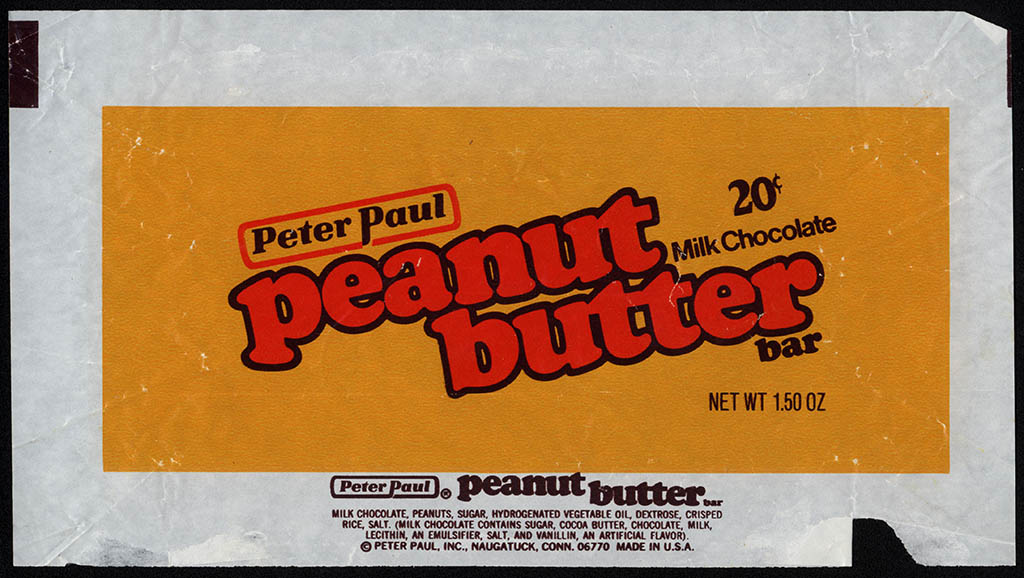 The bar would continue on, at least up until 1979.  I have a pair of later wrappers, but the design wouldn’t change much from this point forward.   The 1978 wrapper would see the “No Artificial Ingredients” info added prominently on the front: 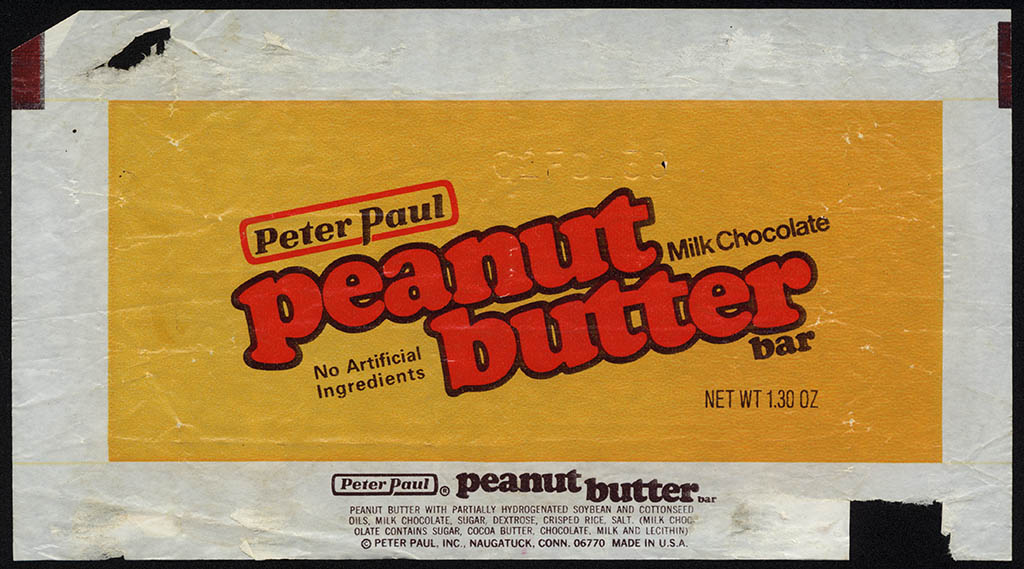 And that’s all of the vintage wrappers I have to share today.

There was a surprising amount of video related to No Jelly out in the internet, so I thought I’d gather them here for you.

First up, a commercial spot for what was likely the test-marketed version of No Jelly – Peter Paul’s Sidekicks:

This next two are not embedded, as they come from the Duke University media archives.  They feature two actors who are called “Peanut Butter” and “Jelly” after they’ve just auditioned for a Peter Paul candy bar.  The quality on these is really nice, and they are yet two more of the earliest No Jelly spots.  You can see them at this link here and the other at this link.

Last but not least… for your viewing entertainment… Monty Python’s “Crunchy Frog”:

I love that sketch.

And that’s everything for today’s coverage on Peter Paul’s wonderfully-oddly-named No Jelly bar.  See you next time!

A New York City based writer, editor and sometimes actor. After spending much of the 1990′s in the comic book business helping tell the stories of Marvel Comics’ X-Men as series editor, he has since split his time between developing his own entertainment properties while still consulting and working on others. Having been described as “the Indiana Jones of lost and forgotten candy”, Jason is one of the country’s premier candy collectors and historians with his discoveries appearing in countless blogs, magazines, newspaper articles, and books. Always happy to share his knowledge and unique perspectives on this colorful part of our popular culture, Jason has consulted with New York’s Museum of Food and Drink and has also been a featured guest on Food Network’s Heavyweights, France’s M6 Capital, and New York’s TheActionRoom.com. My Google Profile+
View all posts by Jason Liebig →
This entry was posted in 1970's, Peanut Butter and tagged 1970's candy, 1970's wrapper, 70's candy, 70's candy bar, candy collecting, candy collection, candy collector, candy wrapper collection, candy wrapper collector, collectible, collecting candy, confectionery, confections, packaging, Peter Paul, sweets, vintage candy wrapper, wrapper. Bookmark the permalink.

48 Responses to Peter Paul’s “No Jelly” – An oddly-named offering from the 70’s.