The name of this website is CollectingCandy and no single candy wrapper has been as responsible for my starting to collect candy than the Marathon’s.

My love of Marathon is reflected throughout the site.  The current Collecting Candy logo is an homage to the typeface on the Marathon wrapper.  A Marathon is also featured prominently in the collage background of our masthead banner.  Check out our About page and you will see me gleefully holding a Marathon.  In short – I’m mad about Marathon.

An early favorite of mine, the Marathon bar’s lifespan was paired almost perfectly with my own pre-teen childhood.  Introduced in 1973, it was last seen on shelves in 1981 or 1982.  So this bar was a part of my candy life from kindergarten into Junior High, years when candy typically makes a big impression.

I didn’t notice when Marathon disappeared.  I expect that I looked for it a few times and wondered why it wasn’t in stock, eventually realizing it wasn’t around anymore.  As the years ticked forward, Marathon’s striking red-orange wrapper and wave-filled logo remained a powerful memory, long into adulthood.  Those memories would eventually guide me back to Marathon, and be the seed that grew into my passion for vintage candy.

For those that don’t know or are too young to remember, the Marathon was a flat braid of chocolate-covered caramel.  It was delicious, and the wrapper was a thing of beauty and disputable subtext.  On the back of the wrapper was an 8-inch ruler – a fact I will move past without comment.

The television commercials also remained ingrained in my noggin.  When I began to look online to find those humorous spots, I learned that the spots’ star, Marathon John, was played by a young Patrick Wayne.  A perfect fit, considering that Patrick Wayne was the son of Hollywood legend, John Wayne. 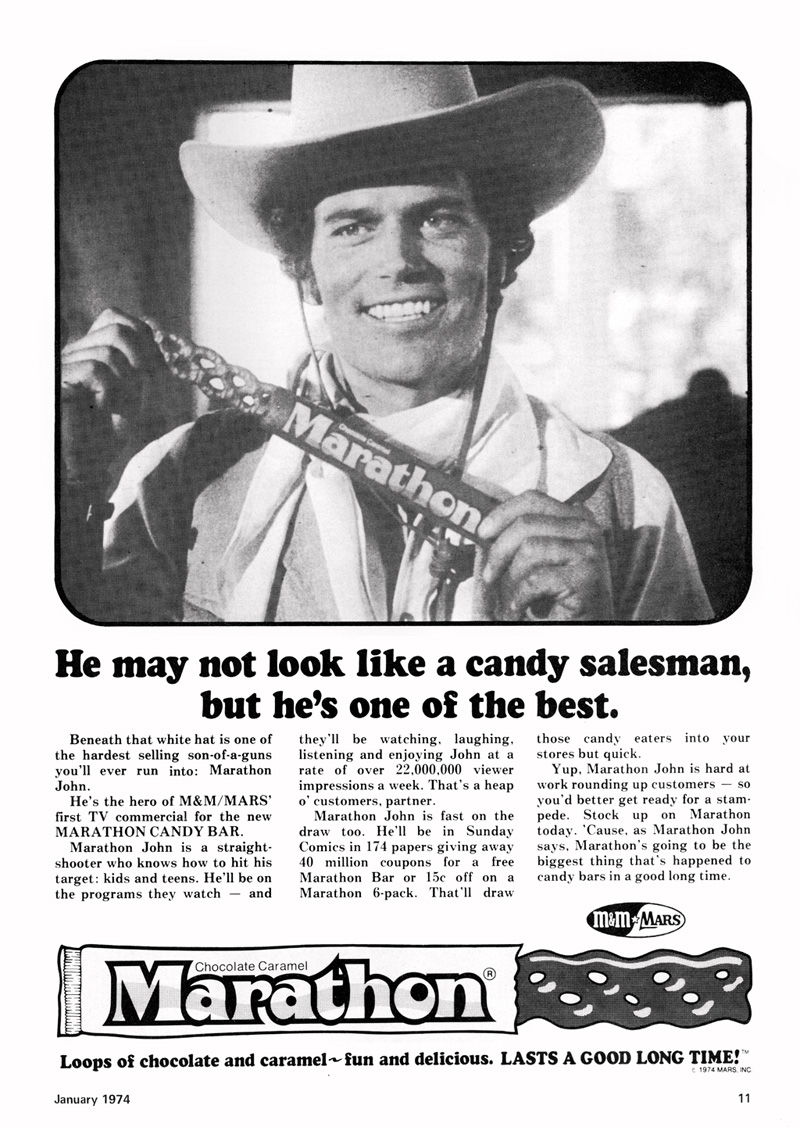 When I began looking for Marathon-related items online, the first things I found were the classic commercials.  They were also the first places I glimpsed the Marathon’s wrapper again.  But I wanted more – so I searched online for a photo of the wrapper.  I eventually did find one.. though it was painfully tiny.

So that was it, my glorious internet that seemed to have all the answers – all of recorded history available at my fingertips – and it provided me with that… a Marathon bar wrapper image for a Barbie doll.  I was not satisfied.

This thumbnail was simply not enough, I wanted to see my Marathon up-close, to perhaps relive that rush of salivation that came at the moment-before-opening.  This postage stamp Marathon was akin to the elevator muzak version of your favorite song.

I did not know about collecting candy wrappers at the time, only that I wanted this one.  So I did what anyone might do, in the post-eBay world – I set up a saved search for Marathon bar on eBay, and waited… and waited.  And waited some more.

I waited quite a while.  In the ensuing time, I started to learn more about candy, driven by my similar quest to find a Hot Tamales box.  I found one of those along the way, and I also realized that I was becoming more and more of a collector.

Not satisfied with a thumbnail image of a Marathon, I took a black-and-white illustration of a wrapper and worked up my own clean version for my computer desktop.  It was a digital placeholder that would have to suffice.

Two years later, I found a seller that was offering a few candy items on eBay.  I inquired if he might have a Marathon bar wrapper and he answered back that he did.  Not only that, but he explained that that it was unopened.

The following day, he sent along photos. I was amazed and delighted at what I saw: 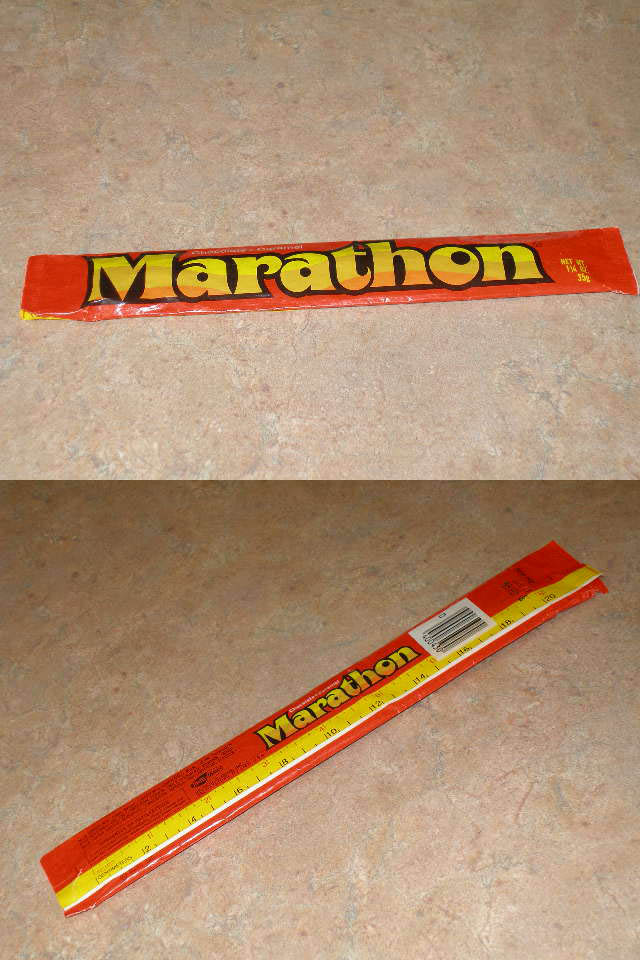 I couldn’t believe it – I’d found my Marathon!  The seller and I worked out a price for the treasure, and I paid.  I even paid extra for insurance and signature required service – I wasn’t going to take any chances with this one.

The following week I eagerly anticipated the arrival of my Marathon bar in the mailbox.  So I waited… and waited.   And waited some more.

After three weeks with no Marathon, I contacted the seller, who assured me that he had sent it out the very next day.  Uh-oh…

With that disturbing information in hand, I took the tracking number to my post office… and from there weeks of frustration would follow.   Initially told the package never arrived  at that post office branch, I was later given conflicting information; they now explained that it had been delivered and signed for – by me.  Huh?

I was presented with a digital copy of the signature sheet – and there it was – my name signed. 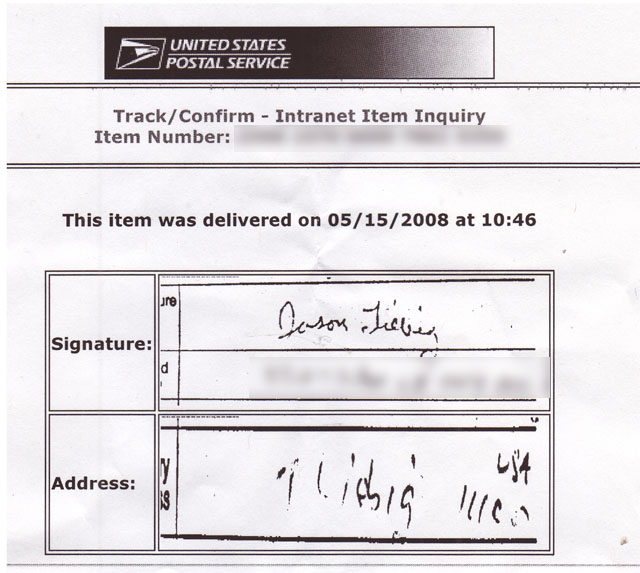 Hey, that’s not my signature!

After an appropriate amount of confusion and outrage, I accepted my Marathon-less fate.  I never did figure out where it ended up, but a happier chapter in this quest comes next.

The following Spring, many months after the case of the missing Marathon bar, a friend and fellow collector traded this wrapper to me.

I was thrilled – I finally had an actual Marathon bar wrapper in hand.  It was a bit tattered and torn, but I didn’t care – it was awesome.

A month later, my candy karma kicked it up another notch when a flawless, year-one, printed-on-price, pre-UPC Marathon wrapper would turn up on Ebay.

This is the only pre-UPC Marathon wrapper I’ve ever come across and the only example with a printed-on price I’ve ever seen, before or since.  This wrapper is the favorite piece in my collection, and it resides framed on the wall, in view, as I write this.  And here it is:

To note about this one:  This could be the earliest style of Marathon bar wrapper – the “Best By” of June 1974 would place the initial on-sale date for this one in late 1973 – the year of Marathon’s launch.  Experience tells me that somewhere out there might be a Marathon with “New!” printed on it – as companies would typically include an indicator on the wrappers of any new launch.  I’ve yet to learn of one being found.  But with candy, never having seen one doesn’t mean it wasn’t produced.

Those two wrappers nicely represent the earliest style as well as one indicative of the main run of the bar.  Near the end of Marathon’s life, Marathon did get one more refresh, with tweaks to the design and logo.  My pal Jon has one of these wrappers in his collection from late 1979.  Chances are, this is what Marathon bar wrappers looked like until production ceased in 1982.

This wrapper retains the fundamental look of that earliest wrapper from a decade earlier.  The biggest change is the loss of the cool 70’s color-wave that ran through the type, and the “M” in the name getting highlighted and over-sized next to the rest of the logo.

On the reverse:  The UPC code narrowed, and the M&M-Mars logo updated to the then-current M&M-Mars Snack-Masters sub-branding.

[Note: I’d sure like to add one of these late run Marathon wrappers to my collection – and this is one I get to keep hunting for.  Thanks to Jon Mankuta for allowing me to include his example here today.]

Though I don’t have any additional variety of Marathon wrappers in  my collection, I do have a great newspaper clipping for a coupon:

I have an image of an earlier version that was good for a free Marathon, or 15-cents off a Marathon 6-bar-pack:

I’ve also sought out any other M&M/Mars packaging that cross-promotes Marathon: 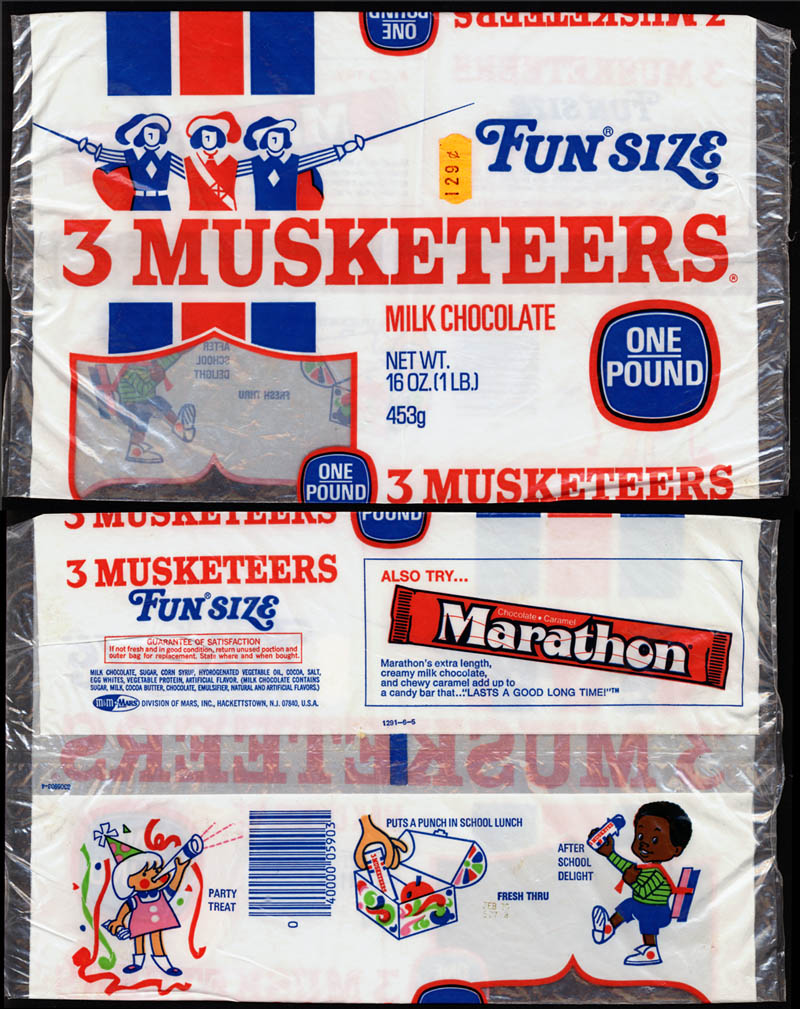 That’s the scope of the actual Marathon items in my collection.  You might wonder what else is out here – I certainly did.

I know that Marathon received the Fun Size treatment, as you can see in this newspaper archival image: 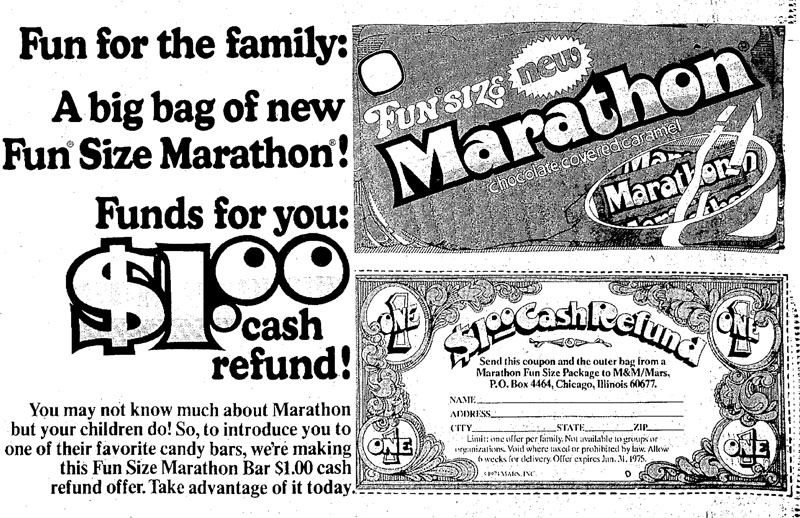 There’s also a singular rumor that is included in the Wikipedia entry for Marathon, that states:  “Note: There was also a 15″ version of The Marathon Bar sold in Southern California at local 7/11 stores. These had the 15″ ruler on the back of the red wrapper.”

I’m skeptical of the existence of this mythical Southern-California 7-Eleven 15″ Marathon.  I’ve investigated and thus far, I have found nothing to corroborate the Wikipedia mention.  As I’ve said before, Wikipedia’s knowledge of candy should be taken with a grain of salt.   If a 15″ Marathon did exist, finding a wrapper for one would be amazing.

Here’s one last piece of visual fun – a newspaper ad featuring an illustration of Marathon John and a few of his commercial adversaries.  If anyone has an original clipping, I’d love to see it. 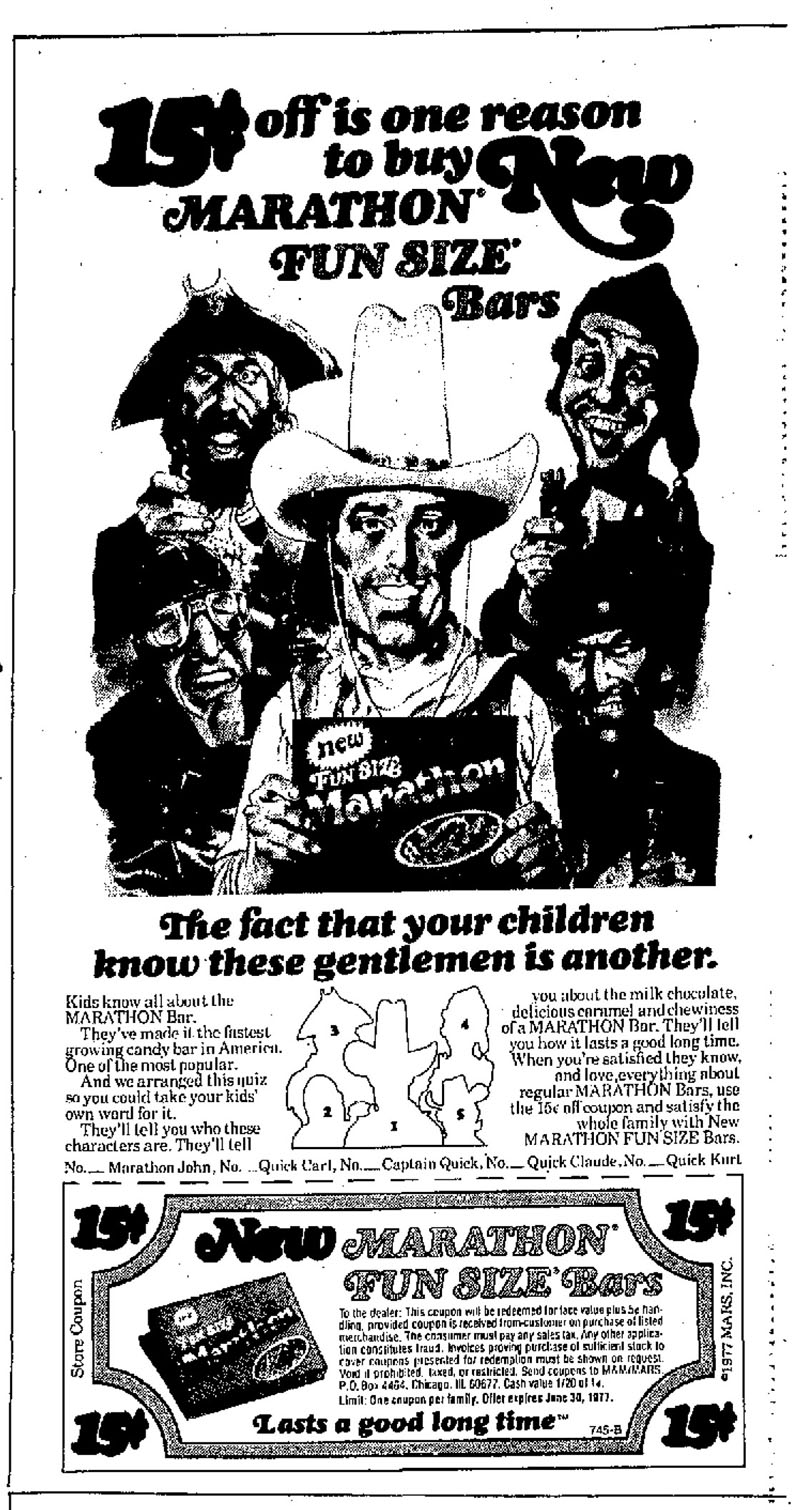 That’s everything I have on Marathon proper.  I’m going to continue this thread tomorrow with more on M&M-Mars confusing use of Marathon, Snickers and 3-Musketeers.  They’re more connected than you might guess.

Then, on Friday I’ll be covering the Marathon-bar like offerings from around the world – most notably with Cadbury’s Curly Wurly.  You won’t want to miss it.