From the UK: Trebor’s Mummies and their Tales from the Tomb!

Released in the United Kingdom around 1979 or 1980, Trebor’s Mummies were a roll candy of sorts with a cool series of “Tales of the Tomb” wrappers that encouraged kids to collect them all!

Being a UK treat, I don’t have any personal recollections of Trebor Mummies – I only know that I really dig the packaging and look of the wrappers.   These have a great Halloween thematic going on, and their “Tales of the Tomb” wrapper backs are classic-spooky fun.

Here are the two different flavor wrappers, as well as the different “Tales of the Tomb” I’ve managed to acquire: 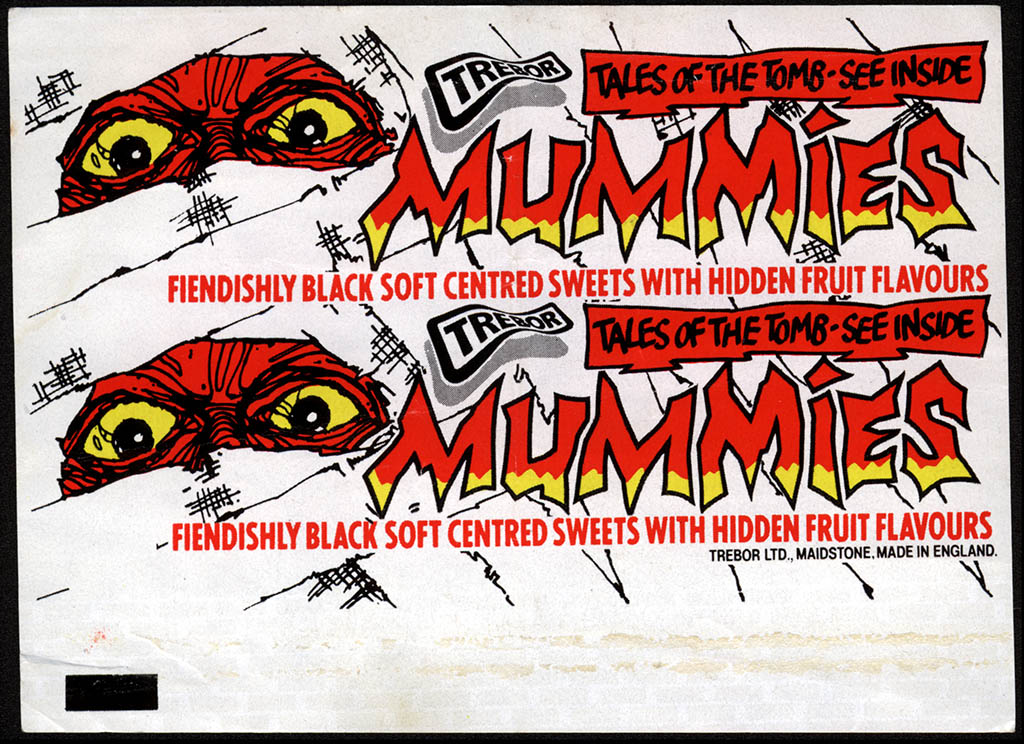 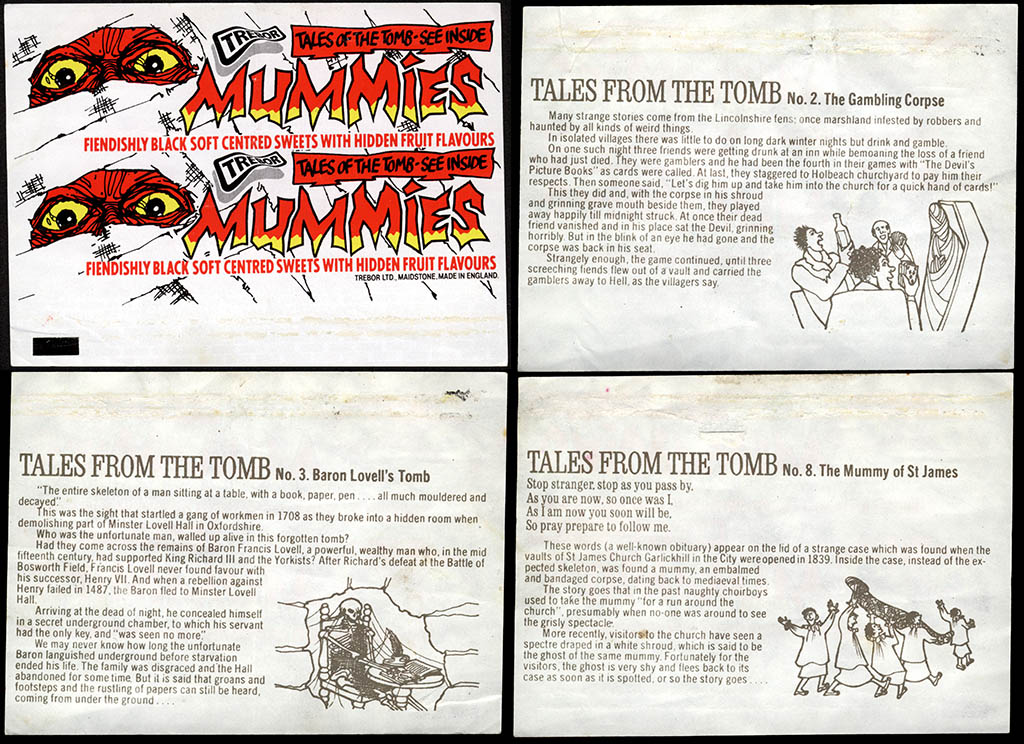 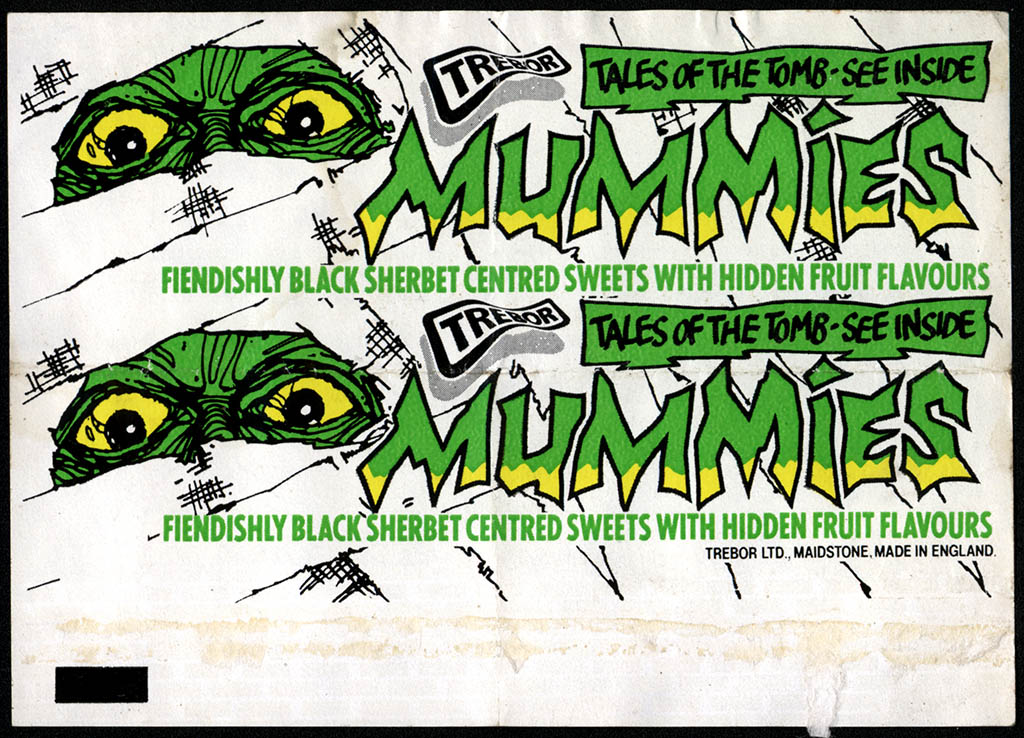 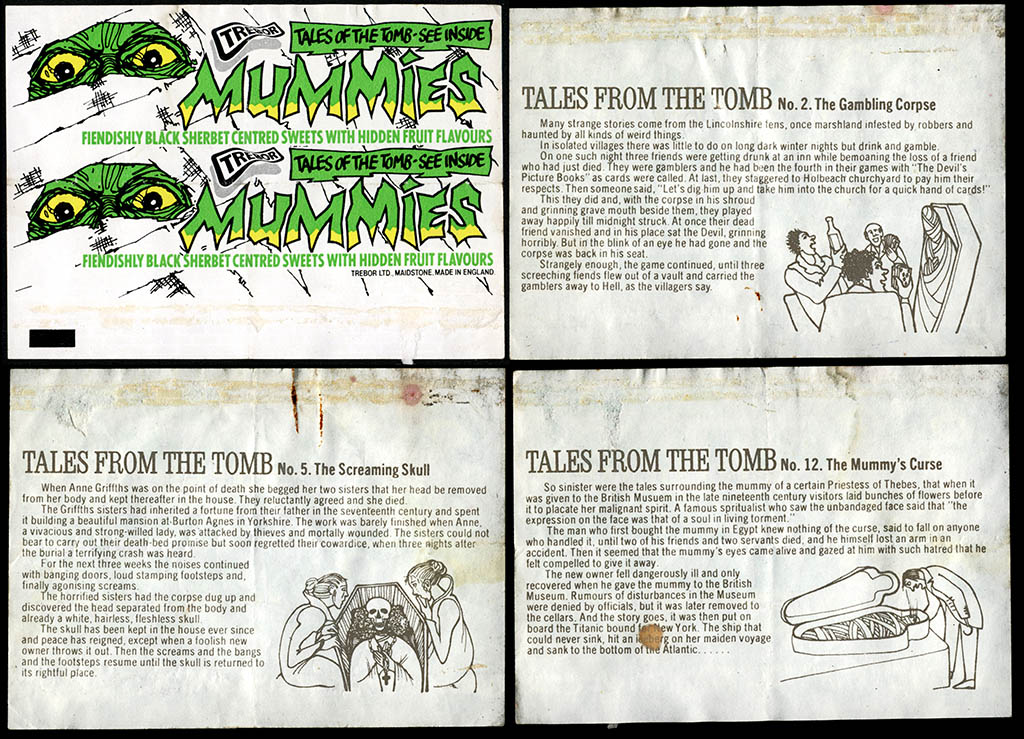 As you can see, the folks at Trebor were more than willing to have a little bit of fun with the scarier side of candy, and that’s a good thing since they brought us these cool bits of wrappers to enjoy.

That’s everything I’ve got on Trebor’s Mummies, but if you’d like to see more, check out this short bit of recollection of them from the great site, The Cobwebbed Room – they did a nice write-up on the topic over here.

Also, if you’re in the mood to read about the company behind these UK Mummies treats, I’ve got a great book for you:   CollectingCandy.com’s friend and fellow confectionery historian, Matthew Crampton, recently published “The Trebor Story”.  I plan to write up a full review of his book in the coming months, but for now you can check it out for yourself at the link below.   Beyond a thorough and rich history of the company, there’s also a ton of awesome vintage candy pictures in there, too.

And so, after a snip of promotion of worthy-and-related subjects, that’s it for today’s post.  See you next time!

A New York City based writer, editor and sometimes actor. After spending much of the 1990′s in the comic book business helping tell the stories of Marvel Comics’ X-Men as series editor, he has since split his time between developing his own entertainment properties while still consulting and working on others. Having been described as “the Indiana Jones of lost and forgotten candy”, Jason is one of the country’s premier candy collectors and historians with his discoveries appearing in countless blogs, magazines, newspaper articles, and books. Always happy to share his knowledge and unique perspectives on this colorful part of our popular culture, Jason has consulted with New York’s Museum of Food and Drink and has also been a featured guest on Food Network’s Heavyweights, France’s M6 Capital, and New York’s TheActionRoom.com. My Google Profile+
View all posts by Jason Liebig →
This entry was posted in 1970's, 1980's, Bubble Gum, CountdownToHalloween, Halloween and tagged British, candy collecting, candy collection, candy collector, candy wrapper collection, candy wrapper collector, collectible, collecting candy, confectionery, confections, Halloween candy, packaging, sweets, Trebor, United Kingdom, vintage candy wrapper, vintage Halloween, wrapper. Bookmark the permalink.