Today I get to share one of my favorite releases that came out of 1970’s Cadbury in the UK – Cadbury’s Monster Bars!   Monster Bars were an imaginative and wonderfully-illustrated series of chocolate bar wrappers that received two different six-wrapper series, for a total of twelve awesome Monster Bar wrappers.

First sold by Cadbury’s of England, at least the first series would see a separate release from Cadbury’s Irish division as well as the Australian/New Zealand branch.  Each division’s wrappers would also possess subtle differences.

We’re going to look at the originals first, than touch upon the regional differences.  Let’s take a look: 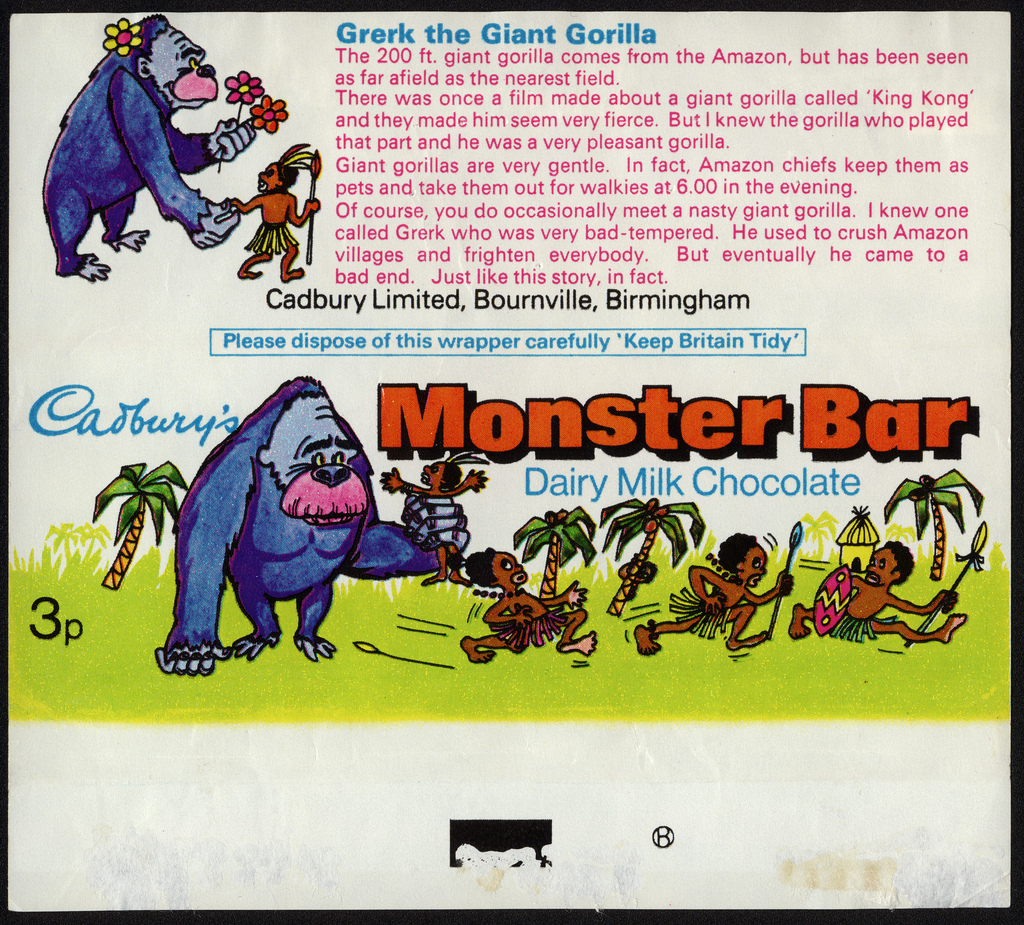 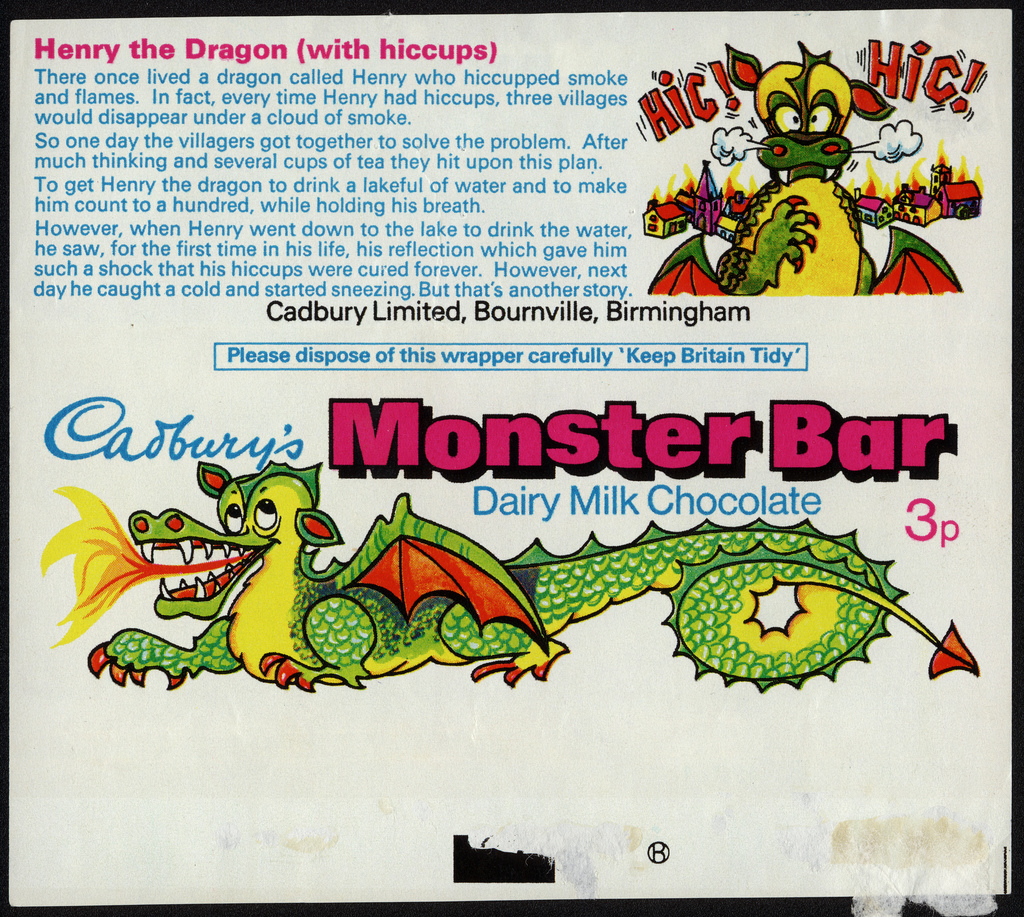 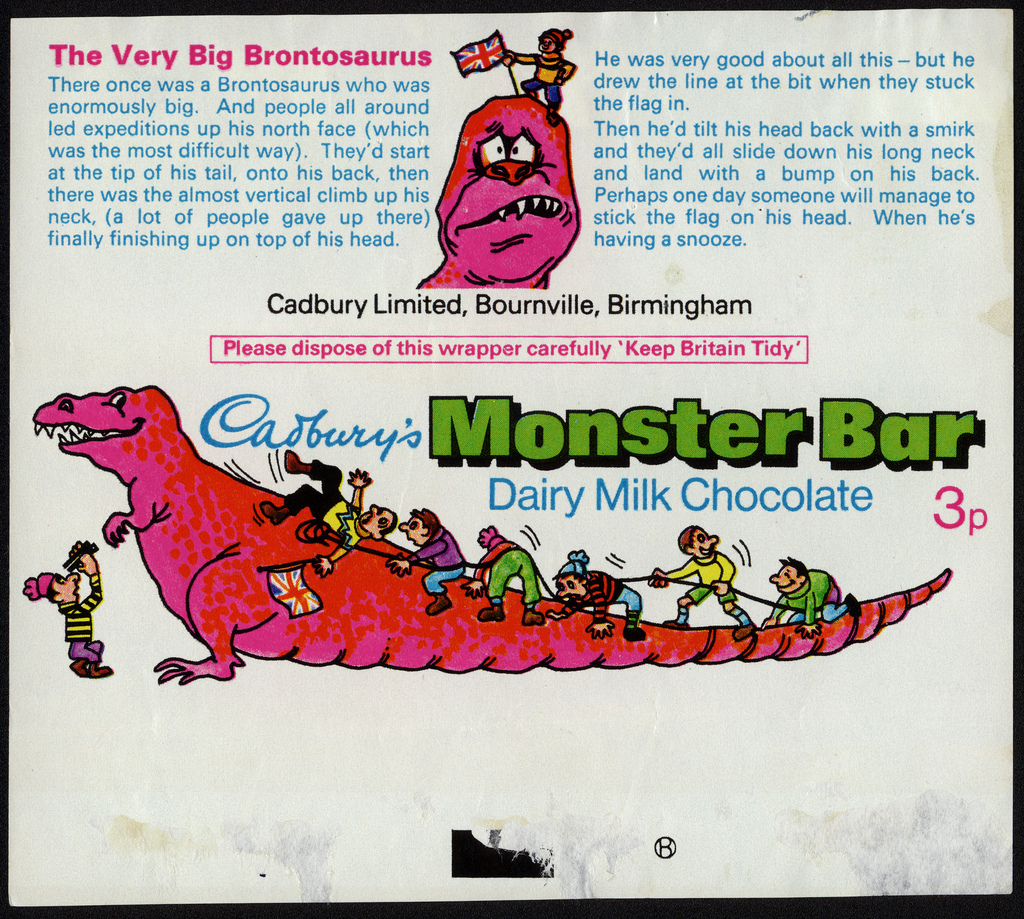 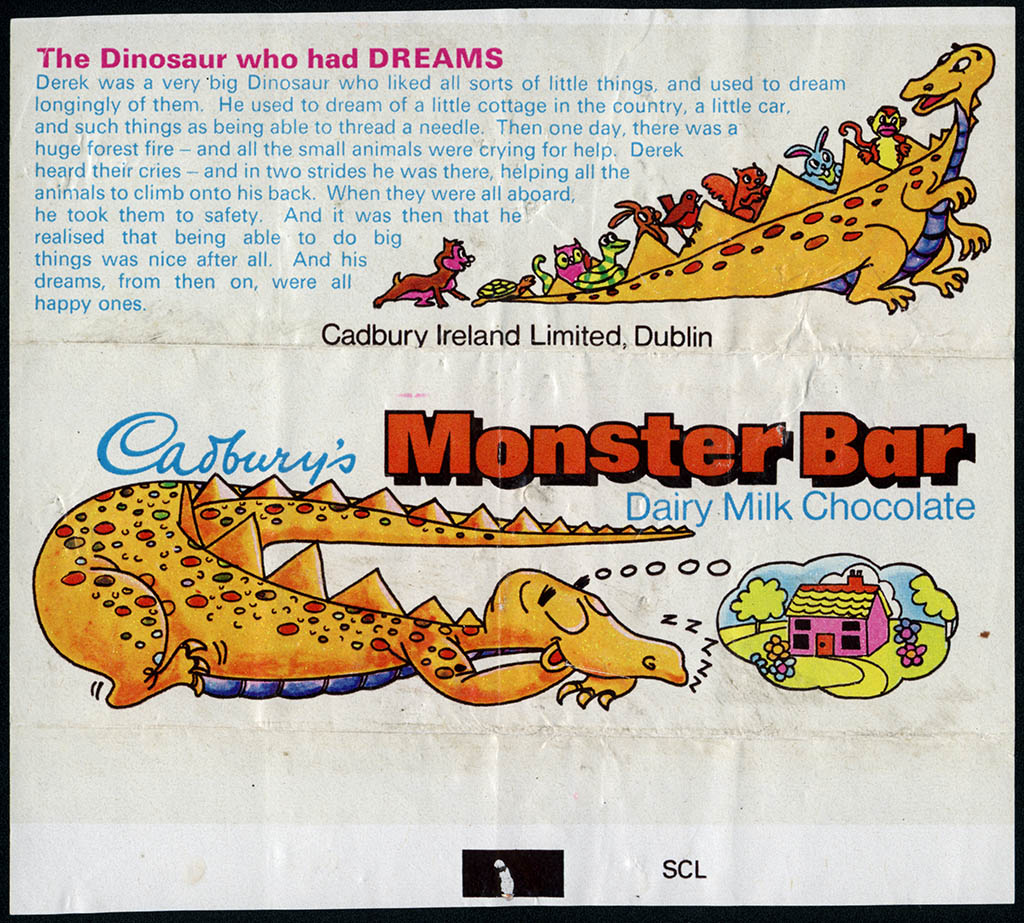 Please note that my last series one wrapper, “The Dinosaur who DREAMS”, differs slightly from the other series one wrappers I’ve collected.  It was produced out of the Dublin, Ireland Cadbury factory, as is indicated on the wrapper.  The difference of the wrappers, beyond the Dublin indication itself, is that it does not include a printed-on price like those produced in England.

Next up, series two: 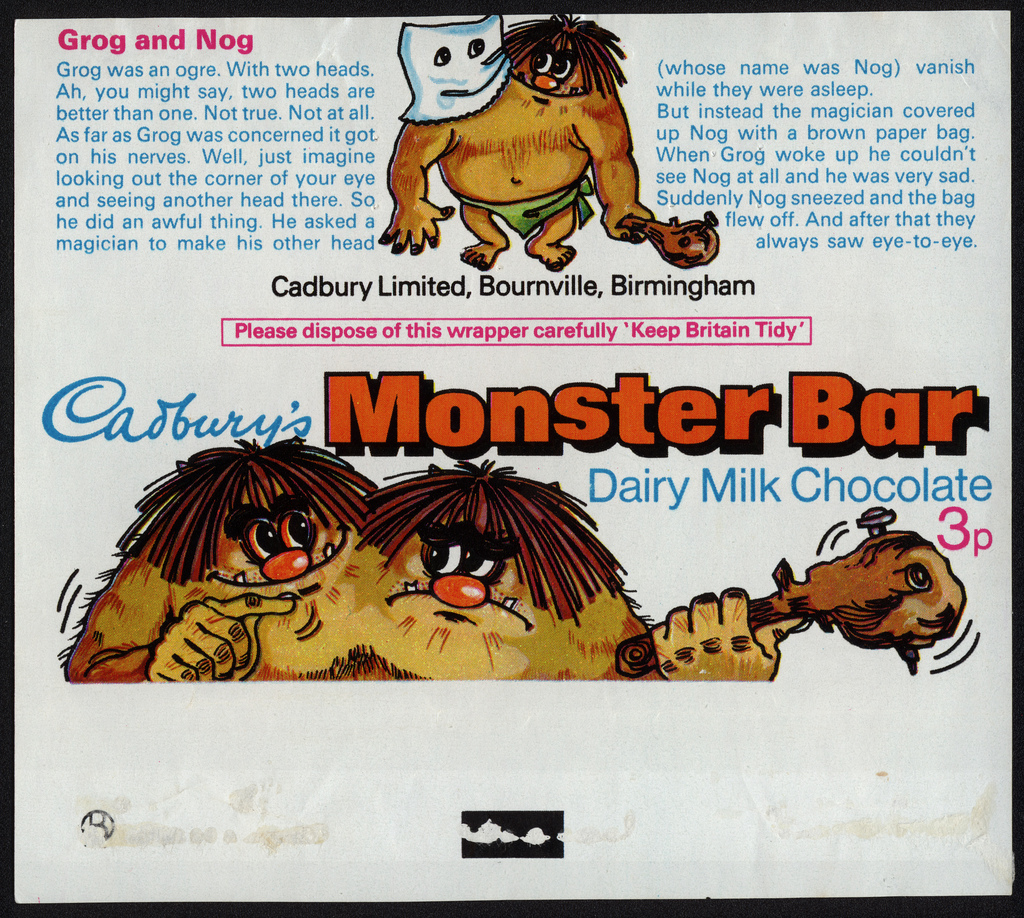 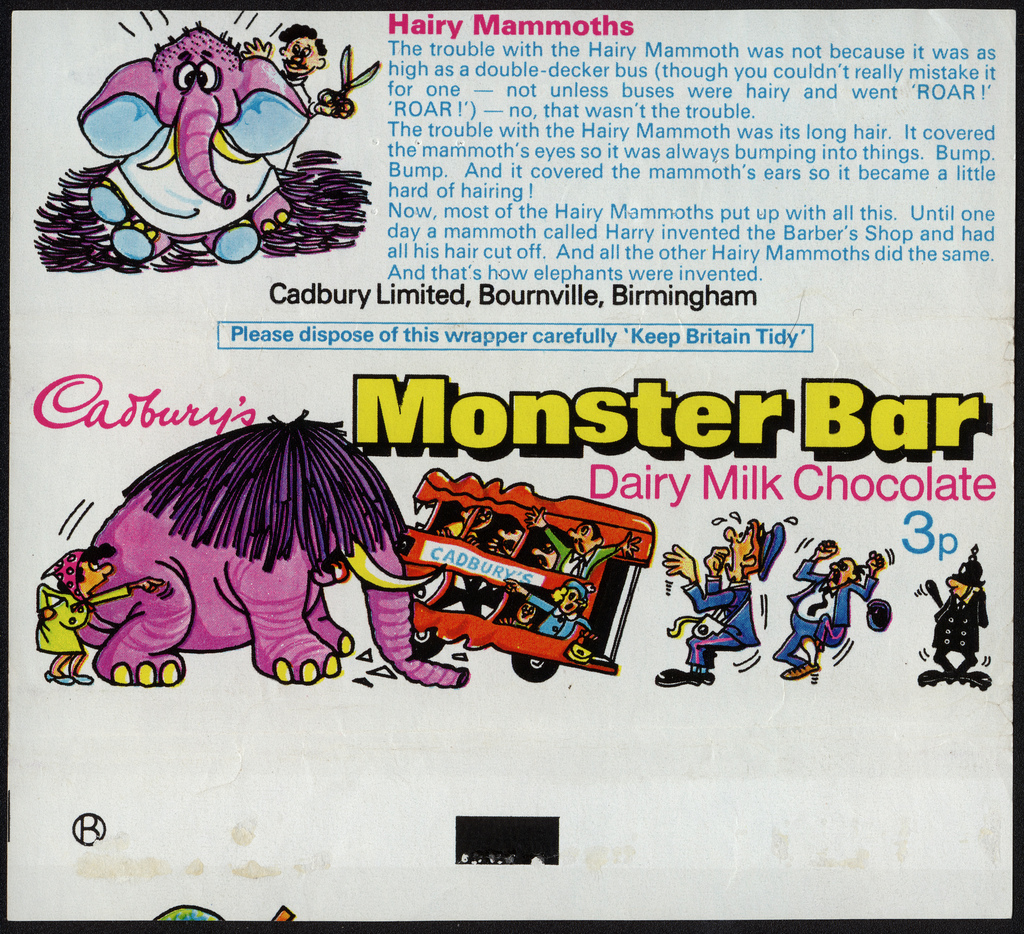 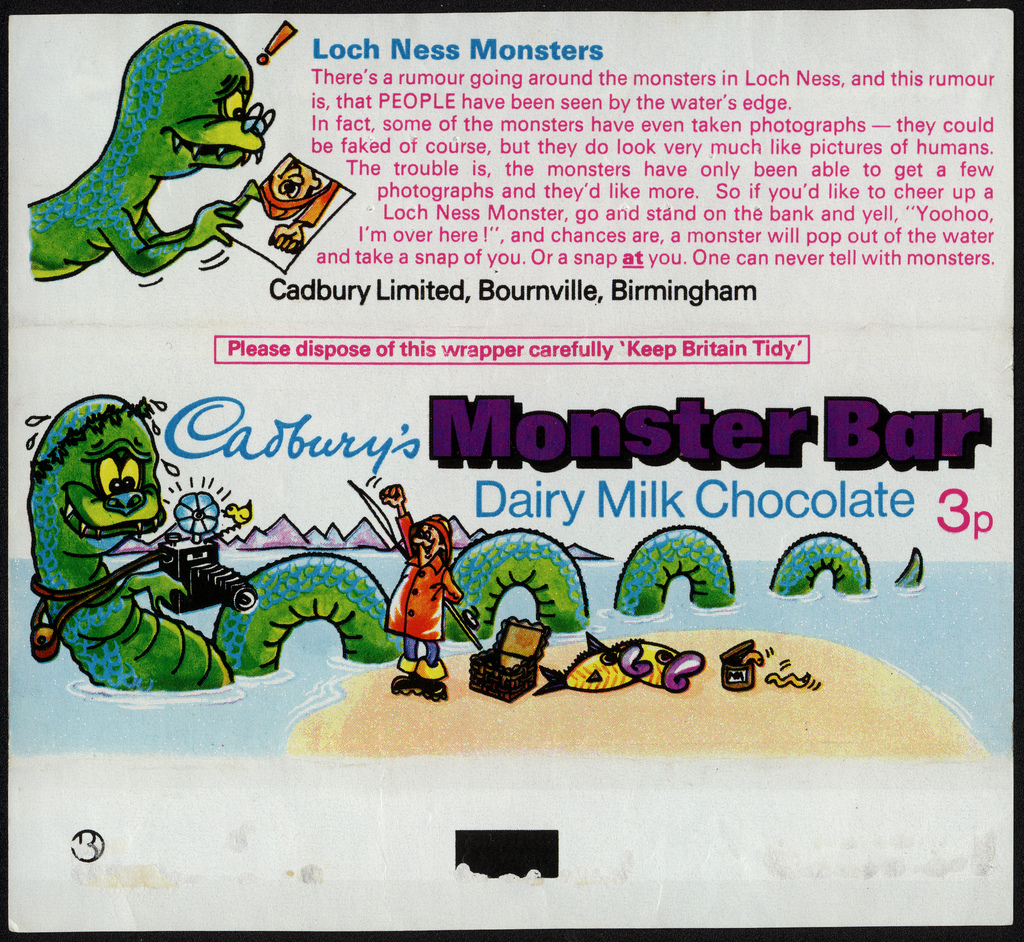 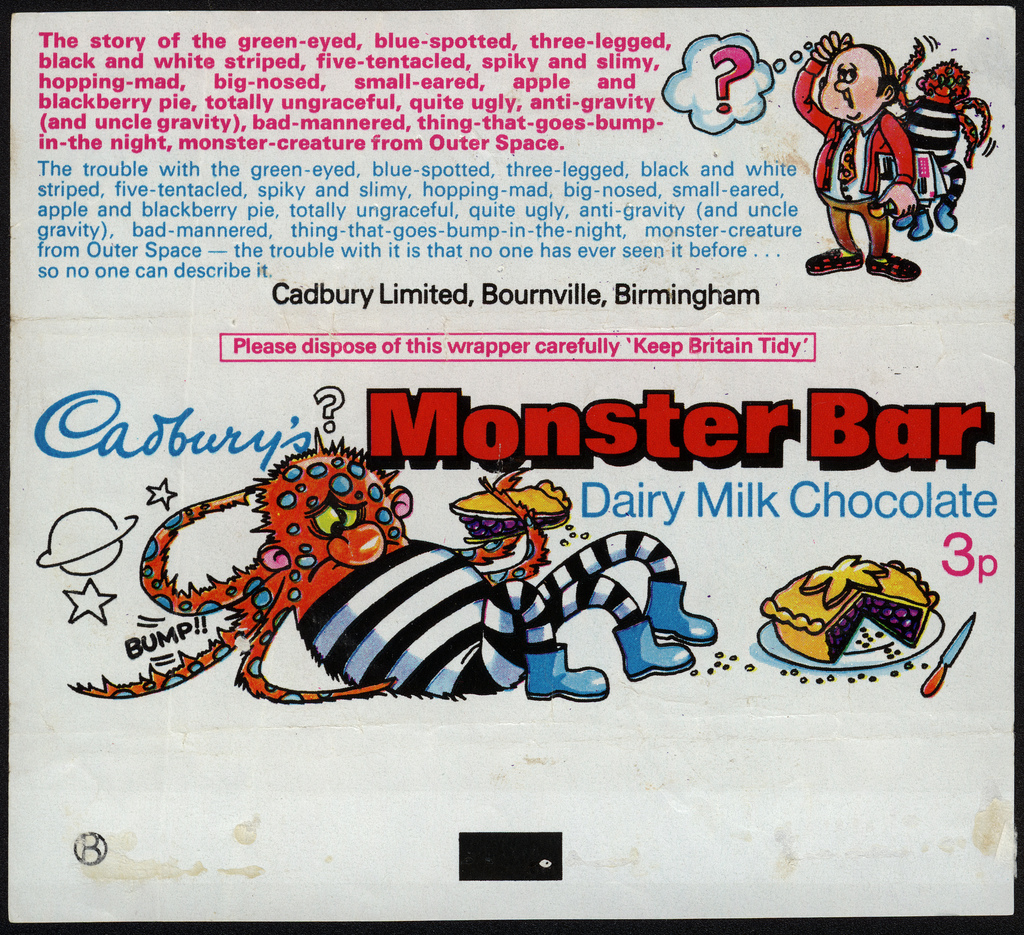 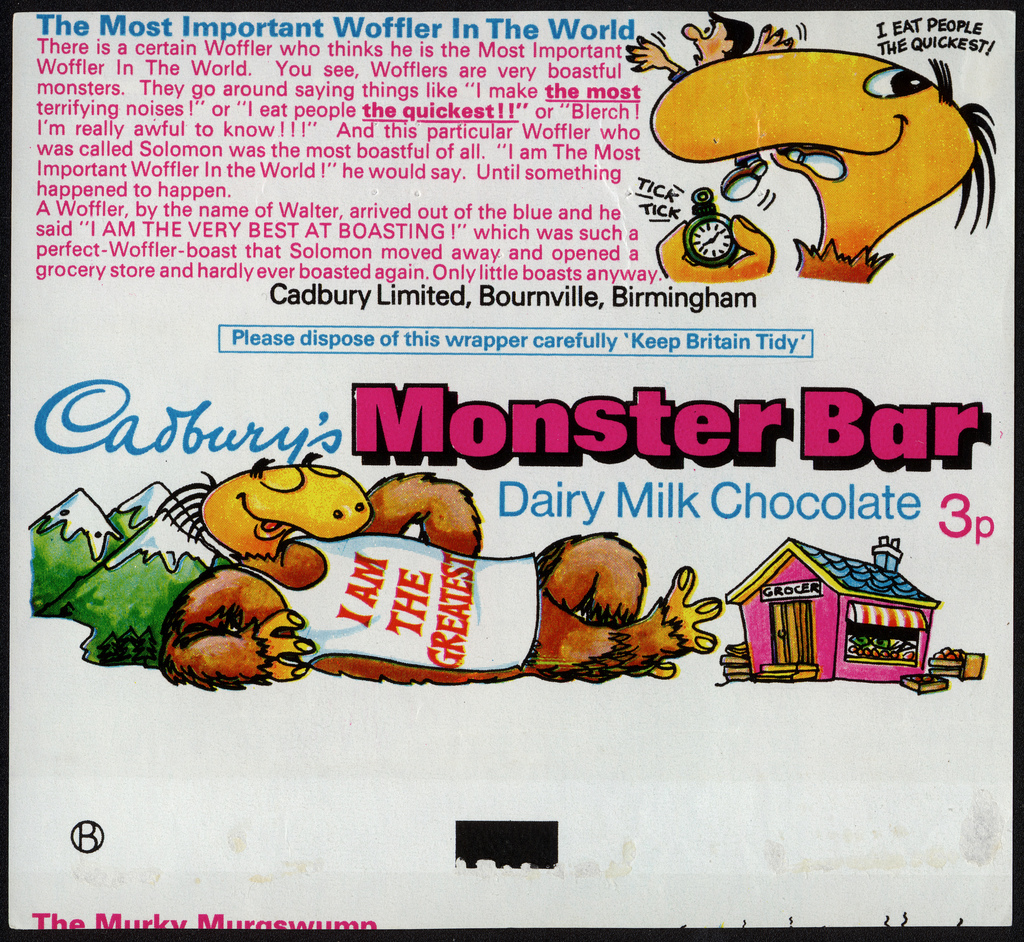 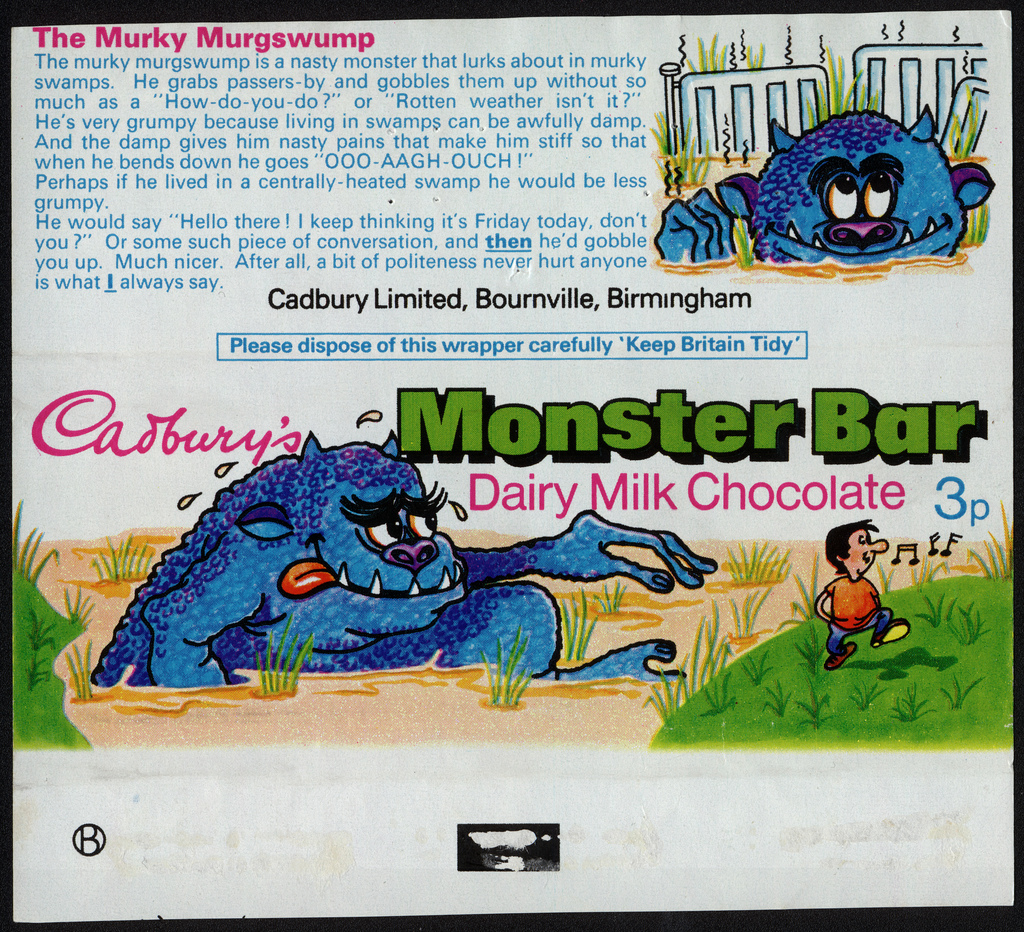 That’s the whole of series two.  And with it, you’ve had the chance to see all the entries of this cool series that offered great colorful illustrations and wacky stories to go along with them.   I don’t know if it’s entirely appropriate, but I’d like to categorize Cadbury’s Monster Bars as a confectionery cult classic. 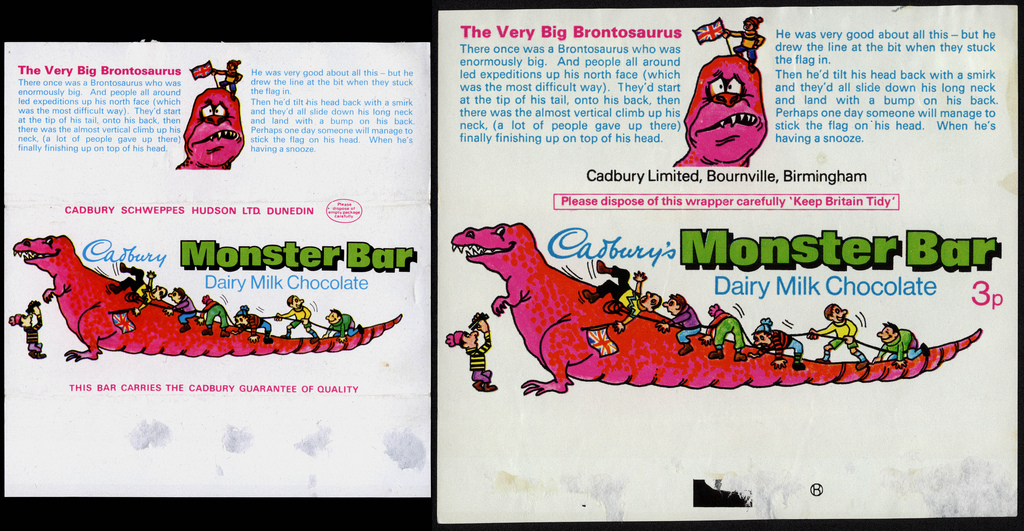 As you can plainly see, the UK’s Brontosaurus was a little bit bigger than the one from Down Under.

So, if you were a real completest, you could assemble three different country sets of Monster Bar wrappers for series one.  I don’t know if there was a series two out of Ireland or Australia-New Zealand, as I’ve yet to find any non-UK versions of them.  But I am always keeping my eyes peeled.

A few years ago, when I was first learning about Cadbury’s Monster Bars, I found a fantastic website documenting one man’s personal recollections of them.  He also shared images of the set of series one wrappers he’d assembled at the time.   Dean Munday is the creator of that site and if you’d like to see what the early 70’s comic book ads for Cadbury’s Monster Bars looked like, you can view them by following this link.  If you think these wrappers are cool, I recommend you check it out.

And that’s everything I’ve got to share with regard to one of my favorite 1970’s UK chocolate bar releases.  I hope you enjoyed the look back at these wonderful releases.

A New York City based writer, editor and sometimes actor. After spending much of the 1990′s in the comic book business helping tell the stories of Marvel Comics’ X-Men as series editor, he has since split his time between developing his own entertainment properties while still consulting and working on others. Having been described as “the Indiana Jones of lost and forgotten candy”, Jason is one of the country’s premier candy collectors and historians with his discoveries appearing in countless blogs, magazines, newspaper articles, and books. Always happy to share his knowledge and unique perspectives on this colorful part of our popular culture, Jason has consulted with New York’s Museum of Food and Drink and has also been a featured guest on Food Network’s Heavyweights, France’s M6 Capital, and New York’s TheActionRoom.com. My Google Profile+
View all posts by Jason Liebig →
This entry was posted in 1970's, British, Cadbury, Chocolate, Novelty and tagged 1970's, 1970's candy, 1970's chocolate, 70's, Australia, Australian, Cadbury, Cadbury's, candy collecting, candy collection, candy collector, candy wrapper collection, candy wrapper collector, collectible, collecting candy, confectionery, confections, Ireland, mascot, monsters, New Zealand, packaging, sweets, UK candy, UK sweets, United Kingdom, vintage candy wrapper, wrapper. Bookmark the permalink.