Hooray for College Football Season!! And Go Big Red with the Cornhusker Bar!

The college football season officially kicked off this week with a full slate of games yesterday, so today I thought I’d mark that occasion with a little college-related candy goodness.

I should also note that, having grown up in Nebraska and graduated from the University there, today’s post is going to be entirely Husker-centric.   I hope the fans of my team’s rivals will forgive me the indulgence.  Go Big Red!

First up is a bar that was, when I acquired it, still intact.  I don’t like to keep unopened candy around too long – I’ve seen bars attacked by critters, as well as the contents themselves erode away the packaging from within.  So this one had to get emptied.

Before I did that, I did take photos.  For the sake of a full look, here’s what 1985’s Corn Husker Bar looked like before and after I opened it: 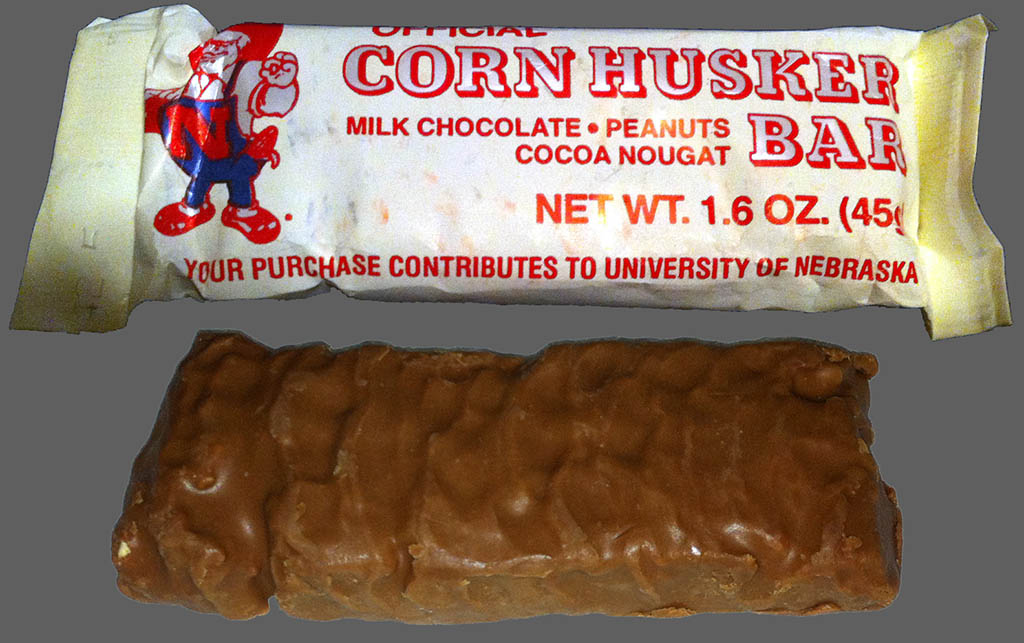 I opened the Corn Husker bar as carefully as I could to remove the contents, but the wrapper still shredded a bit when I did.

Here’s the wrapper, flattened out:

I would imagine that University Foods produced bars for any University that would buy them.  So, there there are likely all sorts of similar wrappers for other programs that may have survived in other parts of the country.    Regional college sports-related food products like this were a bit less common in 1985, but this is a fairly ordinary occurrence now.

Back in 2010, during a trip back to my home state, I picked up two contemporary University of Nebraska related bars.  Here are the wrappers for each: 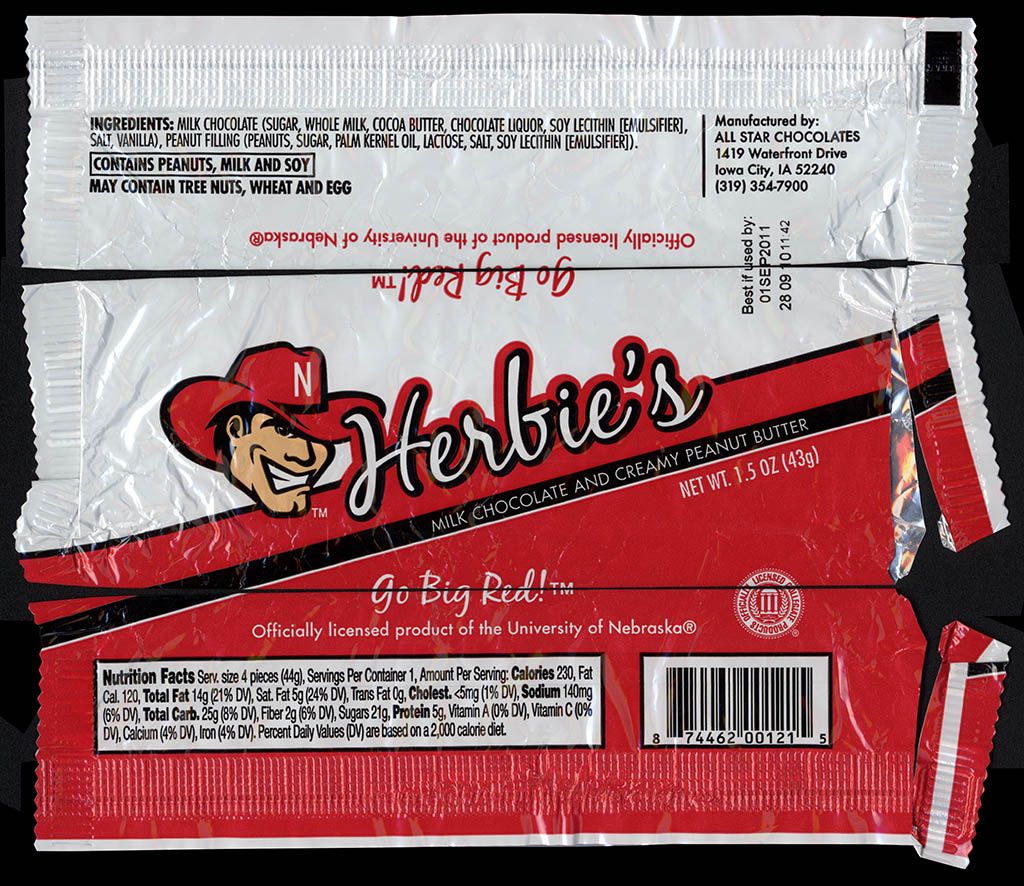 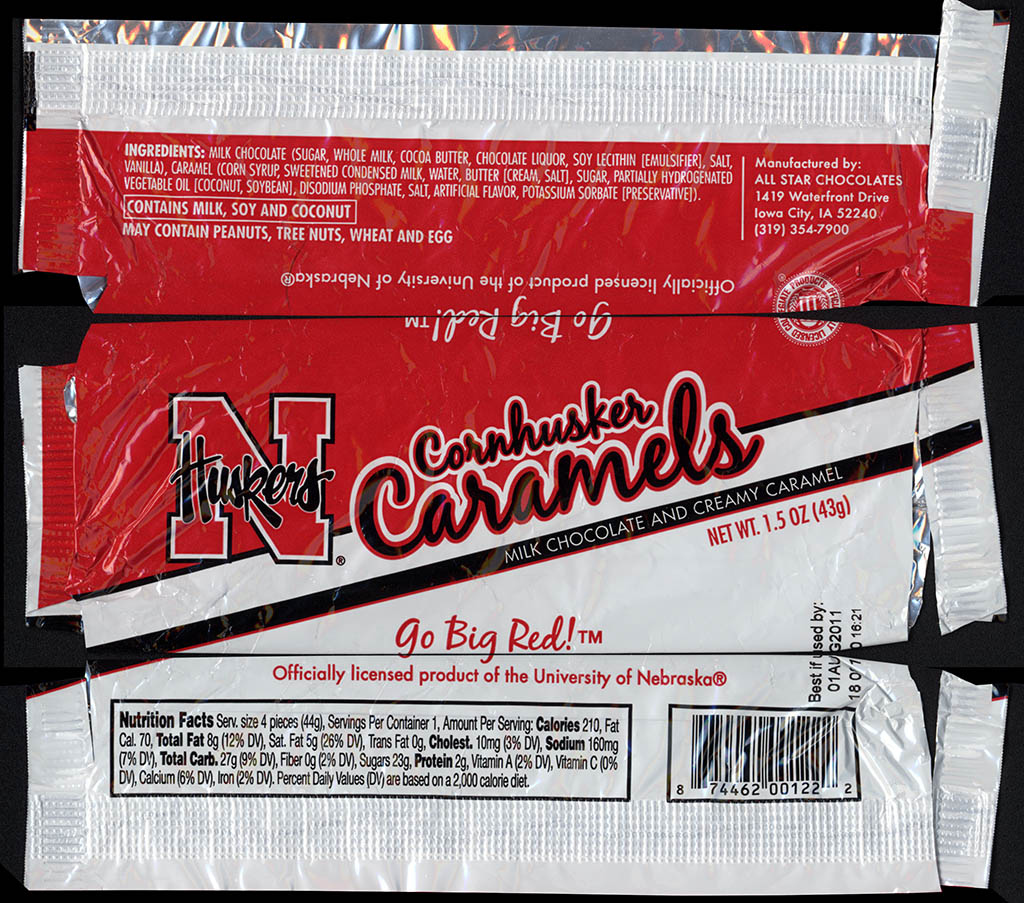 It’s always fun to show support for your home team.  When it comes to confections, however, I suspect that most folks prefer to buy candy bars they know, and show their school support in other ways.  Still — these are pretty fun, and I’m glad they made them, so I can track ’em down.

So College Football 2012 has kicked off, and week one is already behind us.  It’s my hope that we’ve got a great college football season ahead of us filled with entertaining games and good fun.  Of course I also hope that Nebraska wins their conference.  Go Huskers!

A New York City based writer, editor and sometimes actor. After spending much of the 1990′s in the comic book business helping tell the stories of Marvel Comics’ X-Men as series editor, he has since split his time between developing his own entertainment properties while still consulting and working on others. Having been described as “the Indiana Jones of lost and forgotten candy”, Jason is one of the country’s premier candy collectors and historians with his discoveries appearing in countless blogs, magazines, newspaper articles, and books. Always happy to share his knowledge and unique perspectives on this colorful part of our popular culture, Jason has consulted with New York’s Museum of Food and Drink and has also been a featured guest on Food Network’s Heavyweights, France’s M6 Capital, and New York’s TheActionRoom.com. My Google Profile+
View all posts by Jason Liebig →
This entry was posted in 1980's, Chocolate, Novelty and tagged candy collecting, candy collection, candy collector, candy wrapper collection, candy wrapper collector, collectible, collecting candy, confectionery, confections, Cornhusker candy, Cornhuskers, Herbie Husker, Husker candy, Huskers, Nebraska, Nebraska candy, packaging, sweets, University of Nebraska-Lincoln, vintage candy wrapper, wrapper. Bookmark the permalink.