Today I get to unveil another CollectingCandy.com exclusive premiere.  This is a piece of packaging for a candy item you cannot see anywhere else on the internet.   It’s a really cool cinnamon treat from the folks who brought us Air Heads – it’s Van Melle’s Hot Heads!

It’s always fun to uncover these lost little confectionery masterpieces.  With this being a cinnamon candy, it has become one of my immediate favorites.  Not only is it cinnamon, but the graphics take the happy Air Heads balloon mascots and give them a cool devilish visage.  Here it is: 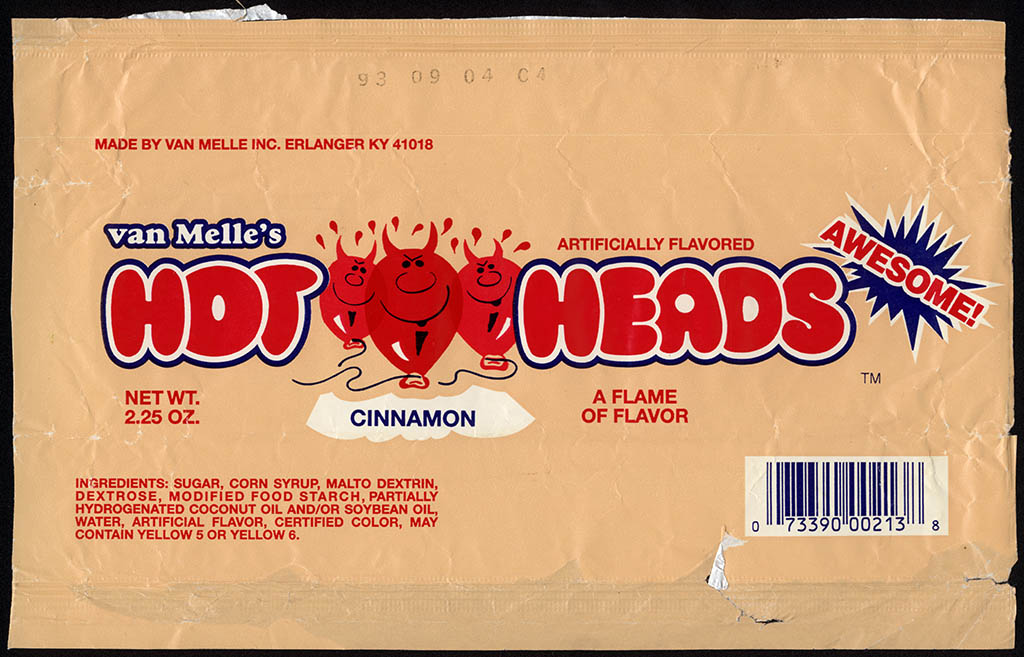 I love the mascots on this one as well as the tag line used, “a flame of flavor”.  I think the various elements of this wrapper make for a fantastic bit of packaging.

I don’t know how long these lasted, but my guess is not more than a year or two.  I’ve not been able to find any other mentions of them in my research.  It’s too bad, as I think a hot cinnamon Air Heads candy would be pretty tasty.   Does anyone out there remember these?

Until I discover more data on them, I’ll leave you with this: Hot Heads were a nearly forgotten spin-off of the Air Heads brand, and I’m excited to be able to share them with you today.

A New York City based writer, editor and sometimes actor. After spending much of the 1990′s in the comic book business helping tell the stories of Marvel Comics’ X-Men as series editor, he has since split his time between developing his own entertainment properties while still consulting and working on others. Having been described as “the Indiana Jones of lost and forgotten candy”, Jason is one of the country’s premier candy collectors and historians with his discoveries appearing in countless blogs, magazines, newspaper articles, and books. Always happy to share his knowledge and unique perspectives on this colorful part of our popular culture, Jason has consulted with New York’s Museum of Food and Drink and has also been a featured guest on Food Network’s Heavyweights, France’s M6 Capital, and New York’s TheActionRoom.com. My Google Profile+
View all posts by Jason Liebig →
This entry was posted in 1990's and tagged 1990's candy, 90's candy, Air Heads candy, Airheads, candy collecting, candy collection, candy collector, candy wrapper collection, candy wrapper collector, collectible, collecting candy, confectionery, confections, packaging, sweets, vintage candy wrapper, wrapper. Bookmark the permalink.