Today is a wonderfully different kind of post for CollectingCandy.com, because it’s about an auction.  But not just any auction or any ordinary auction-offerings – this is the magical stuff that a candy collector’s dreams are made of – and many a movie fans’ dreams, too.

This coming Saturday, on July 28th 2012, Profiles in History will hold “The Dreier Collection – Part 1” auction, and included with it will be the greatest candy props from movie history.

For those that aren’t aware, Profiles in History is the premier auction house for movie and television-related props.  They’ve even got a television show built around their business called Hollywood Treasures (now in its second season on the SyFy channel).

It’s going to be an auction filled with amazing treasures, but for me the most astounding offerings are the ones Joe Maddalena (Profiles in History head) describes as “…the world’s greatest assemblage of wardrobe and props from the 1971 classic Willy Wonka & the Chocolate Factory.”   There is a PDF available of the entire auction catalog here, and I highly recommend you check it out.

For the sake of today’s post, I’m going to share some of the highlights from the auction catalog that blew my mind.  If money were no object, I’d love to own one of these.  But since money is an object, for now I’ll enjoy the images and be satisfied with pure imagination…

The absolute highlights for me are the Willy Wonka costume pieces worn by the legendary Gene Wilder: 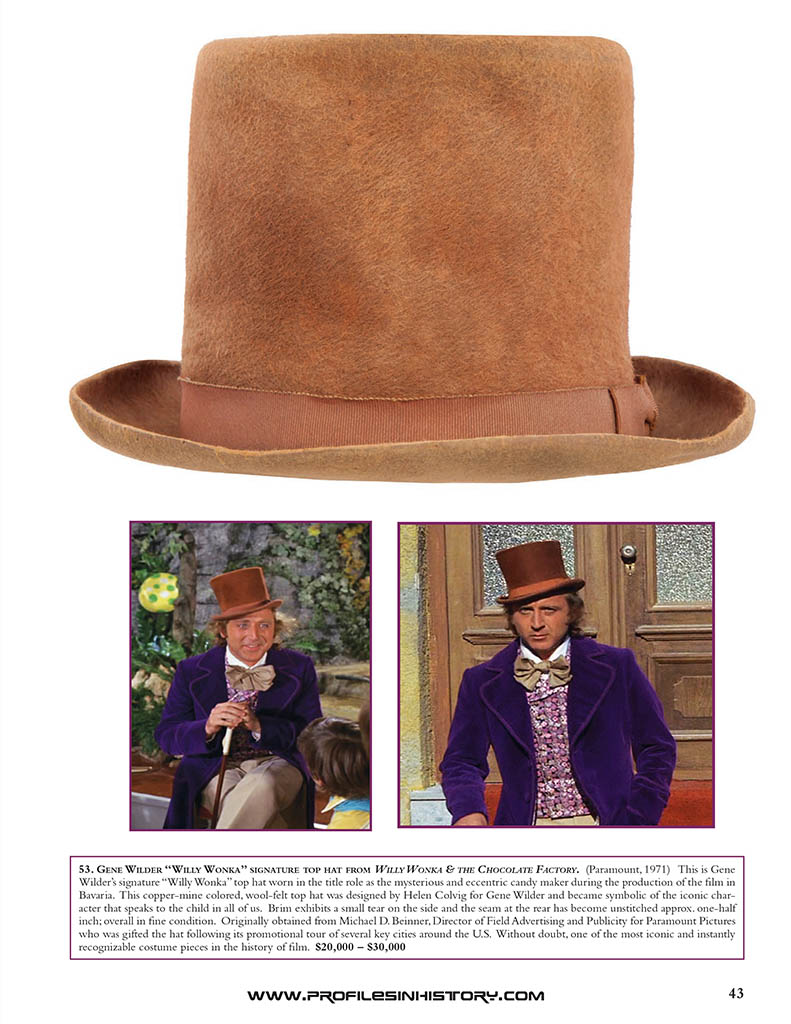 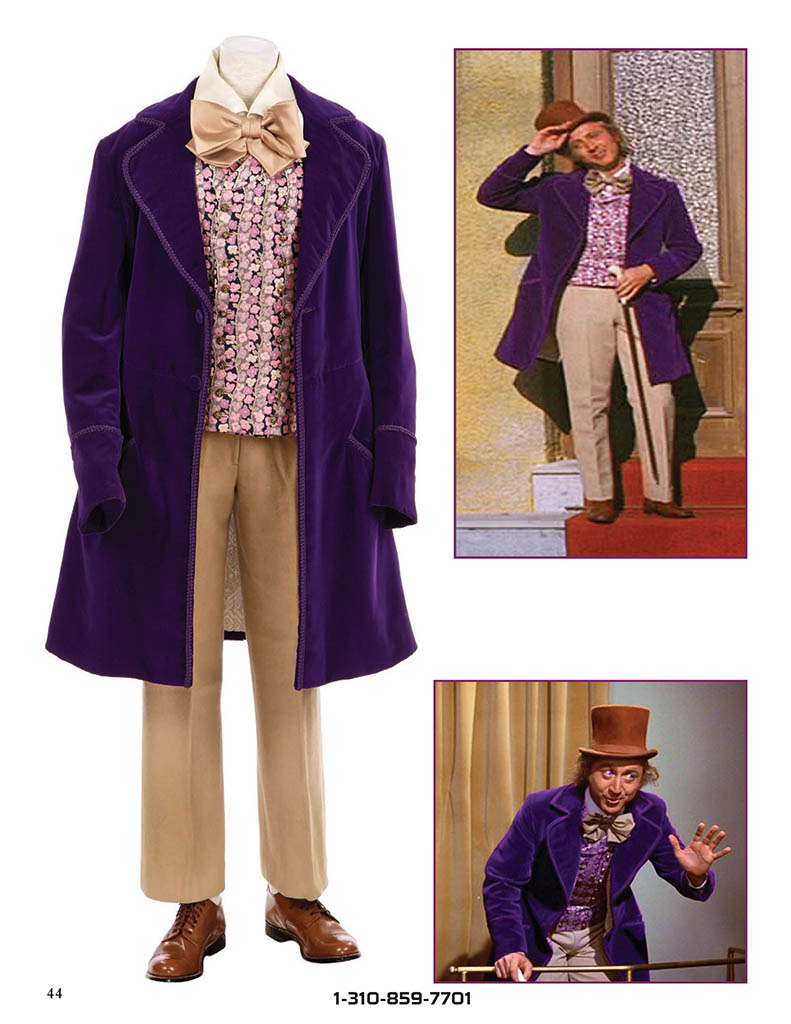 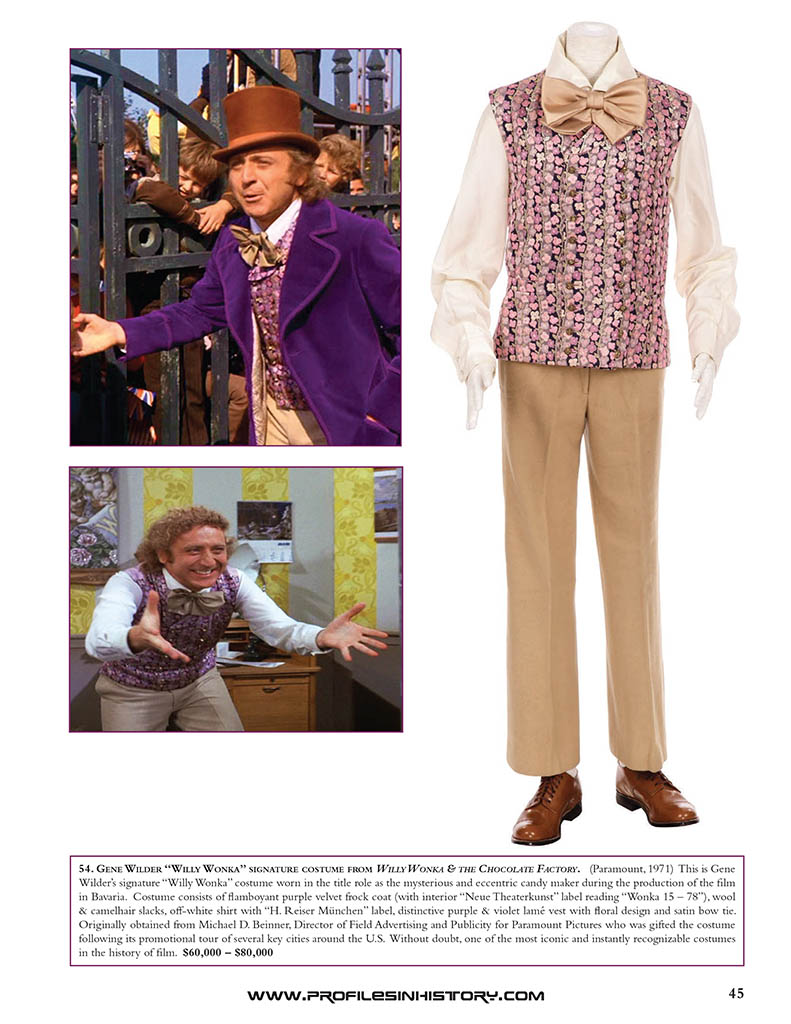 The auction catalog also includes a pair of Grandpa Joe costumes as well as an Oompa Loompa costume that are amazing to see.

Next up on my dream list are some of the candy props themselves.  I have long-wondered if any of these pieces survived filming and existed out there somewhere, so it’s wonderful to finally learn that they did, and do.  Here they are: 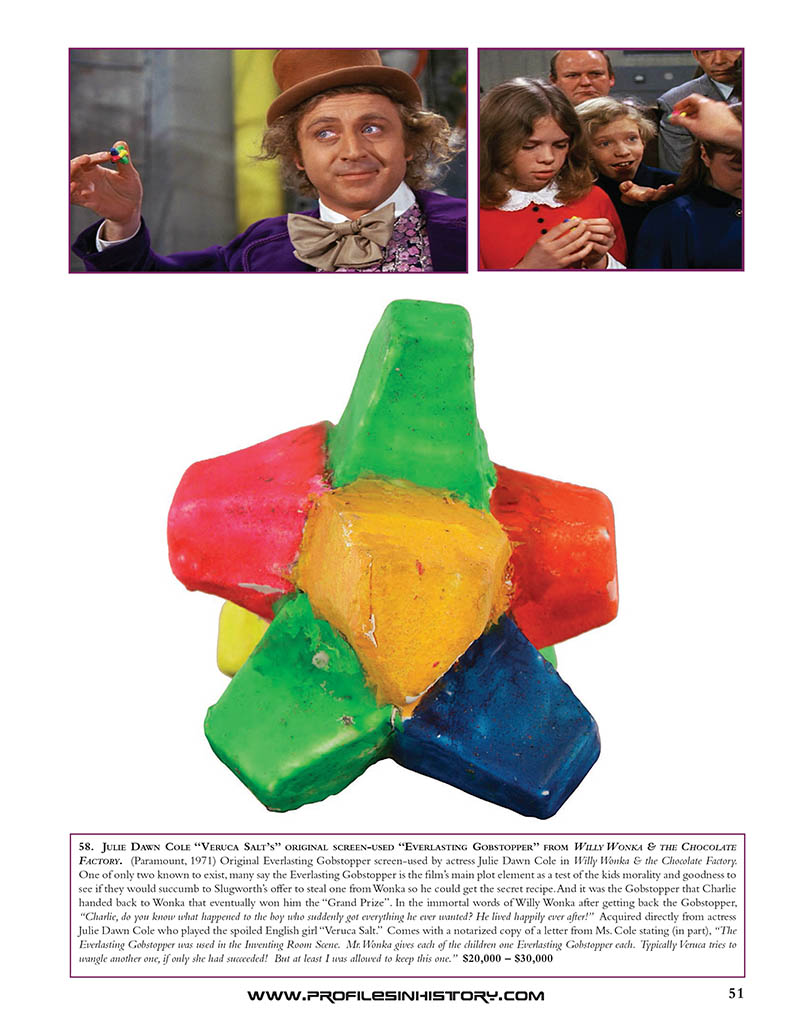 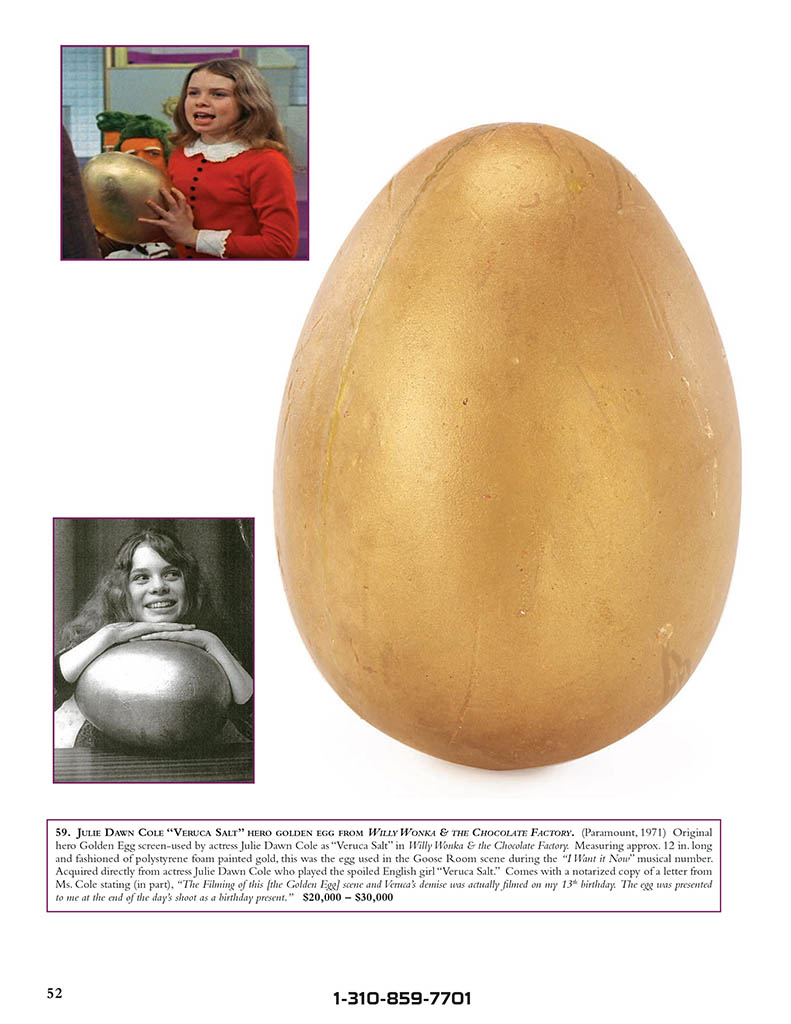 Next up:  A way to finally own one of the sought-after Golden Tickets from the original film: 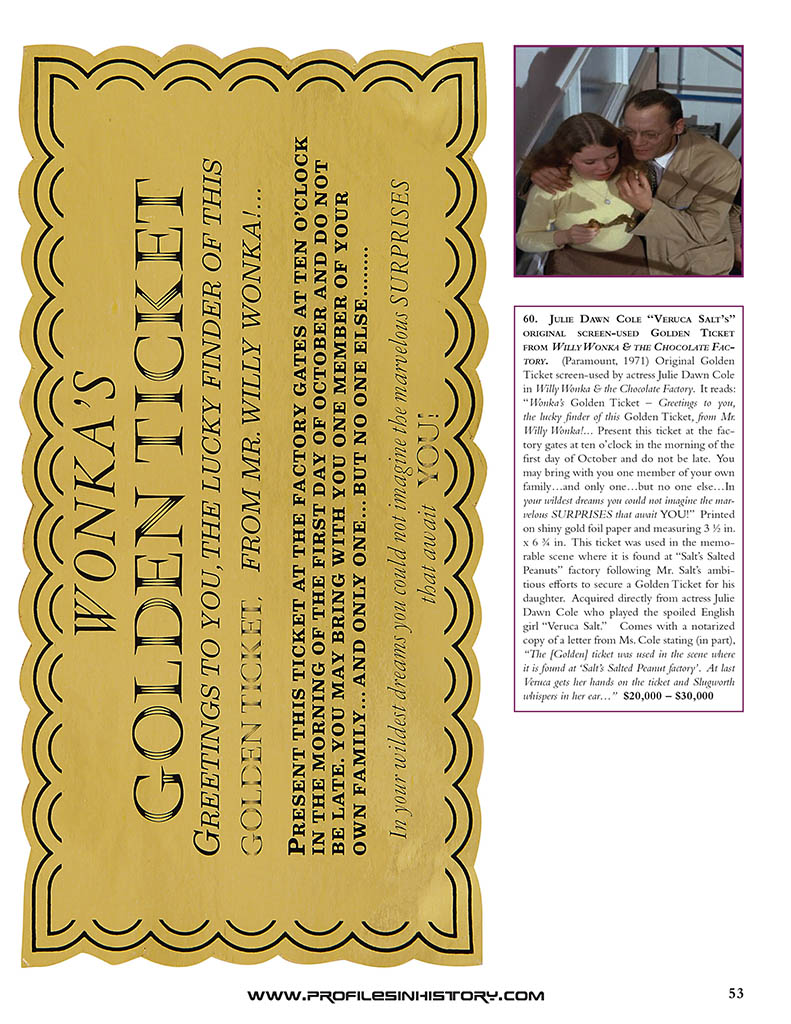 Just a few weeks ago, I sat down to watch the Blu-Ray release of the original Willy Wonka film (I don’t think I’d watched the entirety of the movie in twenty years).  I paused during the first scene in the candy shop and thought, “I wonder if one of those Scrumdidilyumptious bars is out there somewhere?”.

Amazing that only a few weeks later, I’d learn that one was (though sadly, more than a wee bit out of my candy-collecting budget). 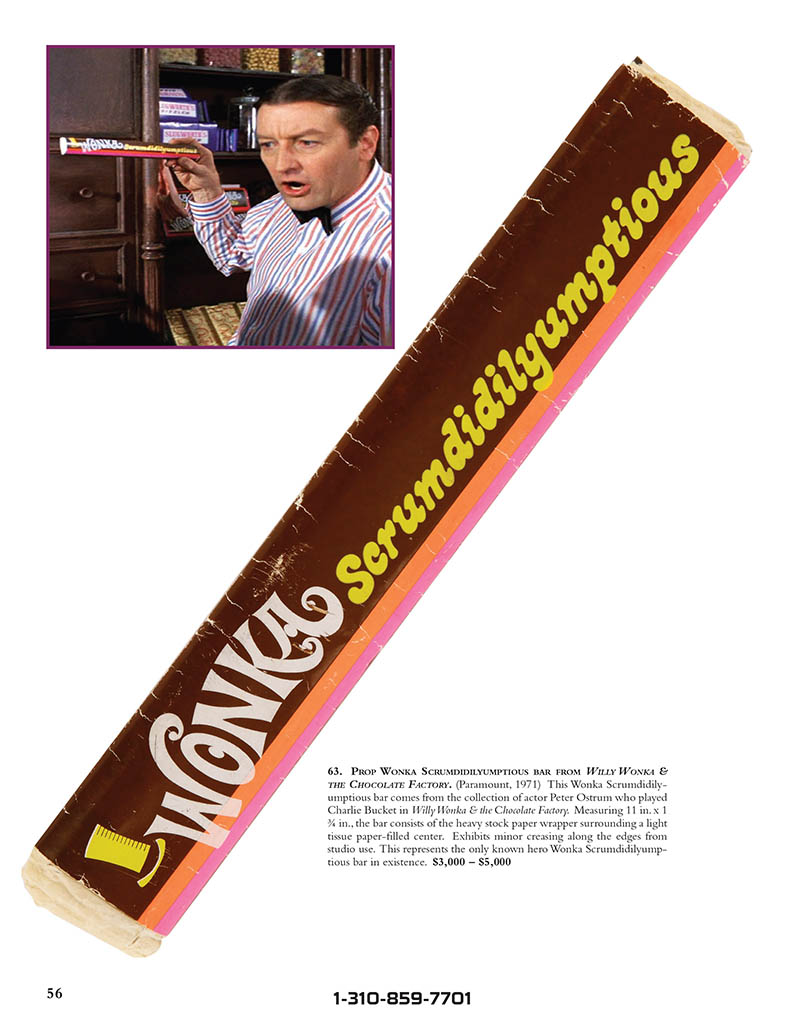 Finally, not to be outdone – a collection of screen-used Wonka Bar props: 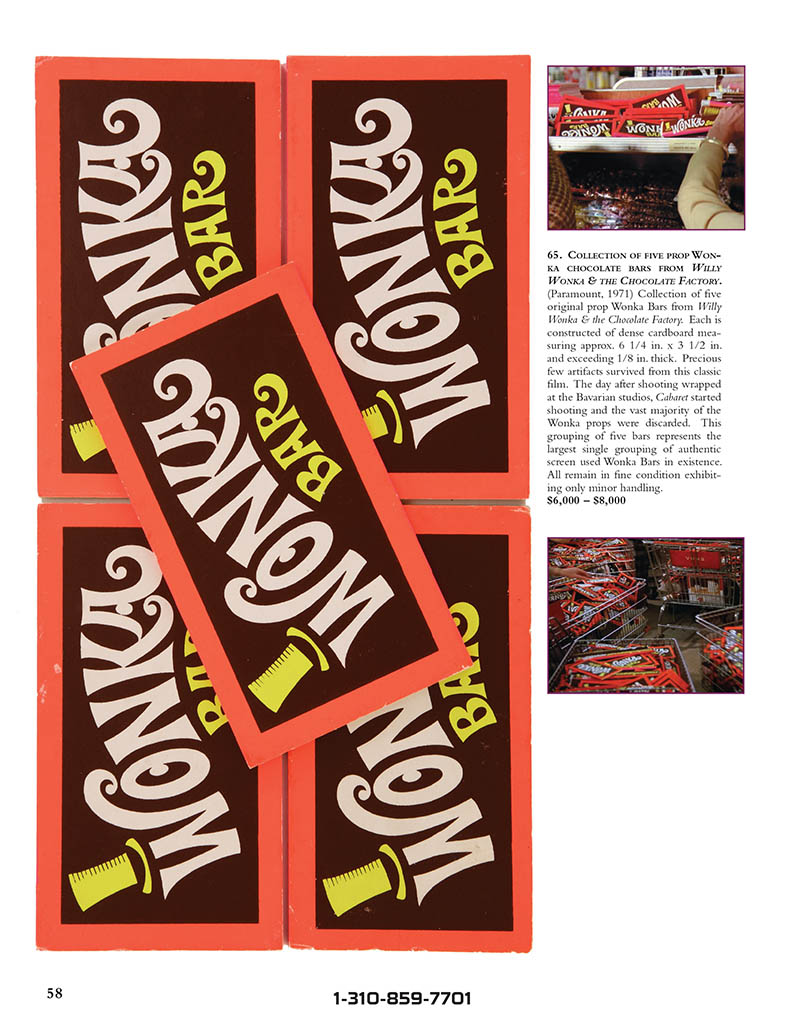 In just two days, all of these incredible cinematic Wonka treasures will be finding new homes.  I won’t be bidding myself, but I wish the best of luck to those that do – each of these is infused with quite a lot of confectionery movie magic!

Not exclusively an assortment of unbelievable movie props, the Dreier Collection also houses an incredible array of Pez dispensers, which will also be on the blocks this Saturday.  I’ve selected a few Pez-related pages from the catalog to share today, but I’ll again encourage you to check out the whole auction catalog via the downloadable PDF (it’s free to download!), from the Profiles In History site.

Here are just a few of the PEZ offerings: 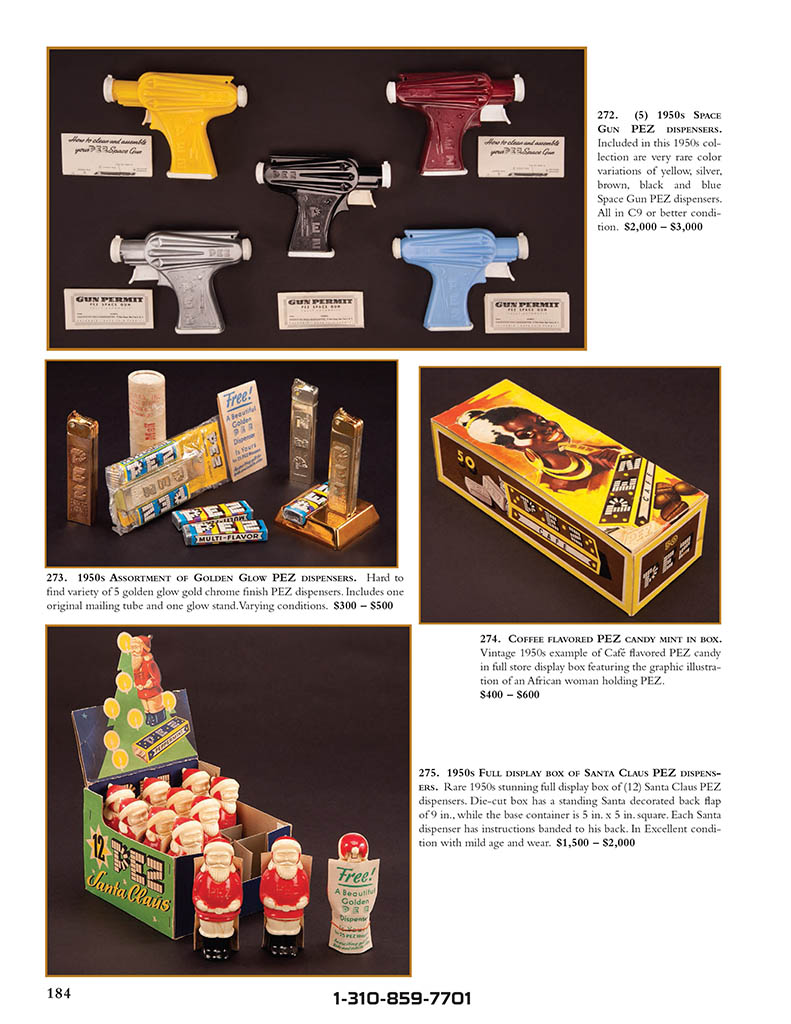 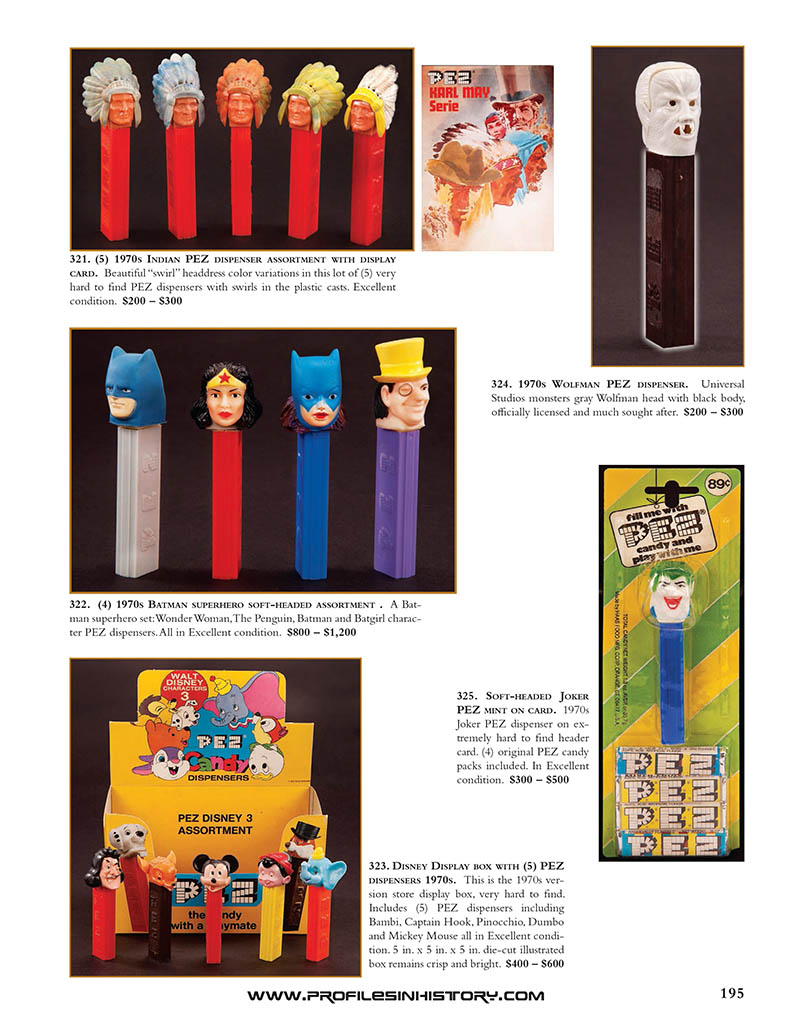 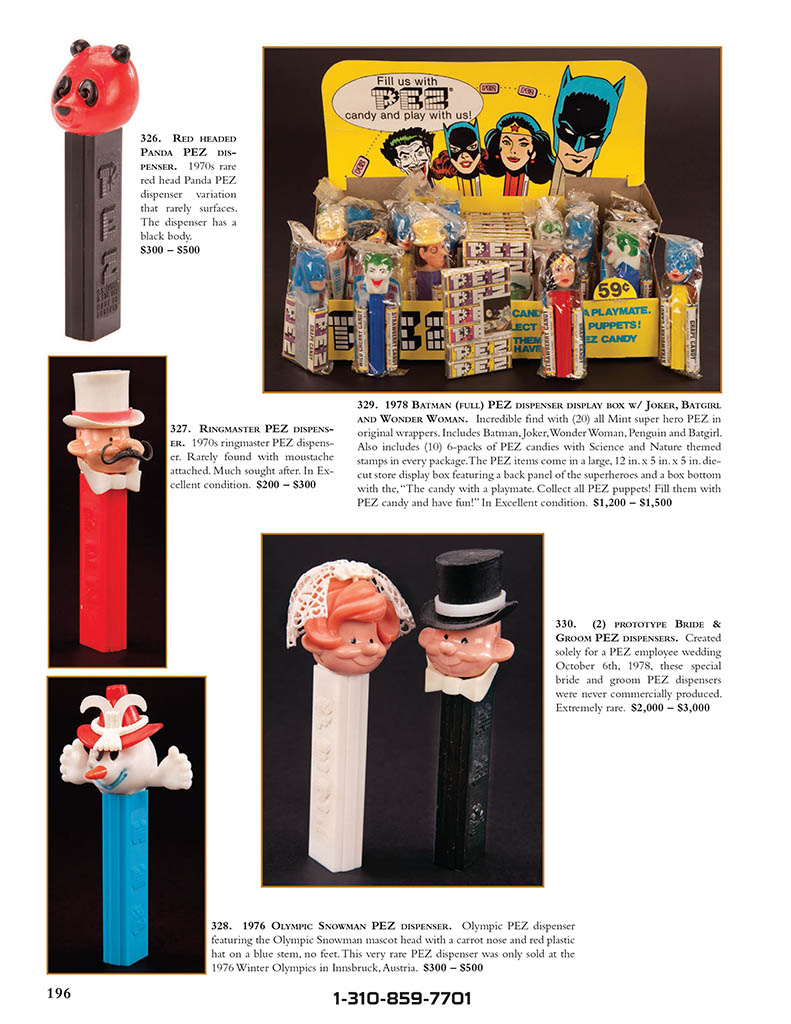 There’s so much more about the contents of this collection and this auction that I could gush over, but for now I’ll leave you with the images to consider.  It’s easily the most amazing array of candy-related goodies I’ve ever seen in one place.  I’ve no doubt I’ll be talking about this auction and referring to it for many years to come.

A New York City based writer, editor and sometimes actor. After spending much of the 1990′s in the comic book business helping tell the stories of Marvel Comics’ X-Men as series editor, he has since split his time between developing his own entertainment properties while still consulting and working on others. Having been described as “the Indiana Jones of lost and forgotten candy”, Jason is one of the country’s premier candy collectors and historians with his discoveries appearing in countless blogs, magazines, newspaper articles, and books. Always happy to share his knowledge and unique perspectives on this colorful part of our popular culture, Jason has consulted with New York’s Museum of Food and Drink and has also been a featured guest on Food Network’s Heavyweights, France’s M6 Capital, and New York’s TheActionRoom.com. My Google Profile+
View all posts by Jason Liebig →
This entry was posted in 1970's, Novelty, Wonka and tagged 1970's candy, 70's candy, candy collecting, candy collection, candy collector, candy movie props. Willy Wonka movie props, candy wrapper collection, candy wrapper collector, collectible, collecting candy, confectionery, confections, Hollywood Treasures Dreier Collection, movie props, packaging, PEZ collection, sweets, vintage candy wrapper, Wonka bars, wrapper. Bookmark the permalink.