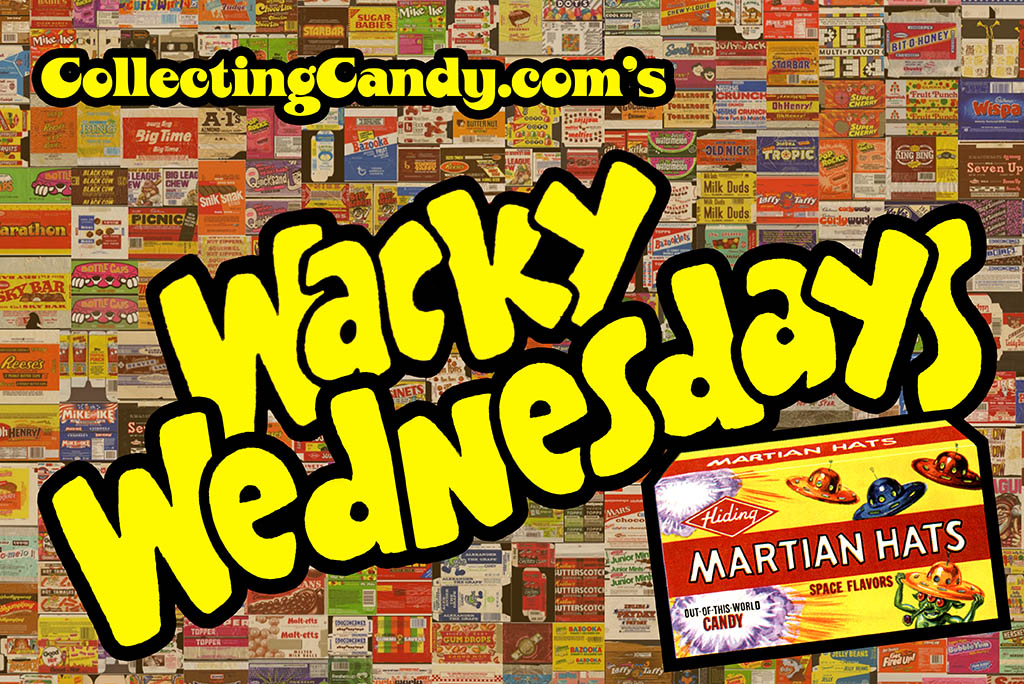 For today’s edition of Wacky Wednesdays, we’ll be going back to 1974 and the Wacky Packages Series 12 sticker, Martian Hats.

Based on Heide’s Mexican Hats candies, Martian Hats is another Wacky Packages sticker I have strong recollections of.   There’s just something about the composition and the alien with those pulpy UFO’s flying around – this one is pretty awesome.

Let’s take a closer look at the sticker: 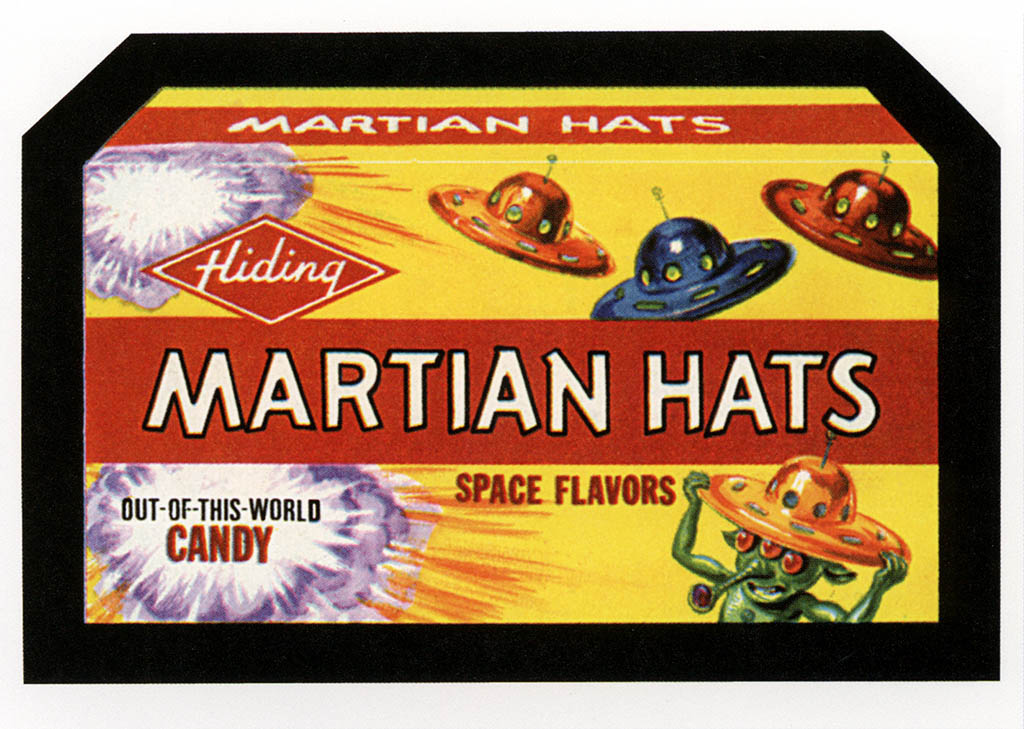 Due to my appreciation for the sticker, when I finally found an era-appropriate Heide Mexican Hats box, I was thrilled.   As a collector, I’d never seen one before, and there were no images of the correct style of box anywhere on the internet.  It was pretty great to track this one down: 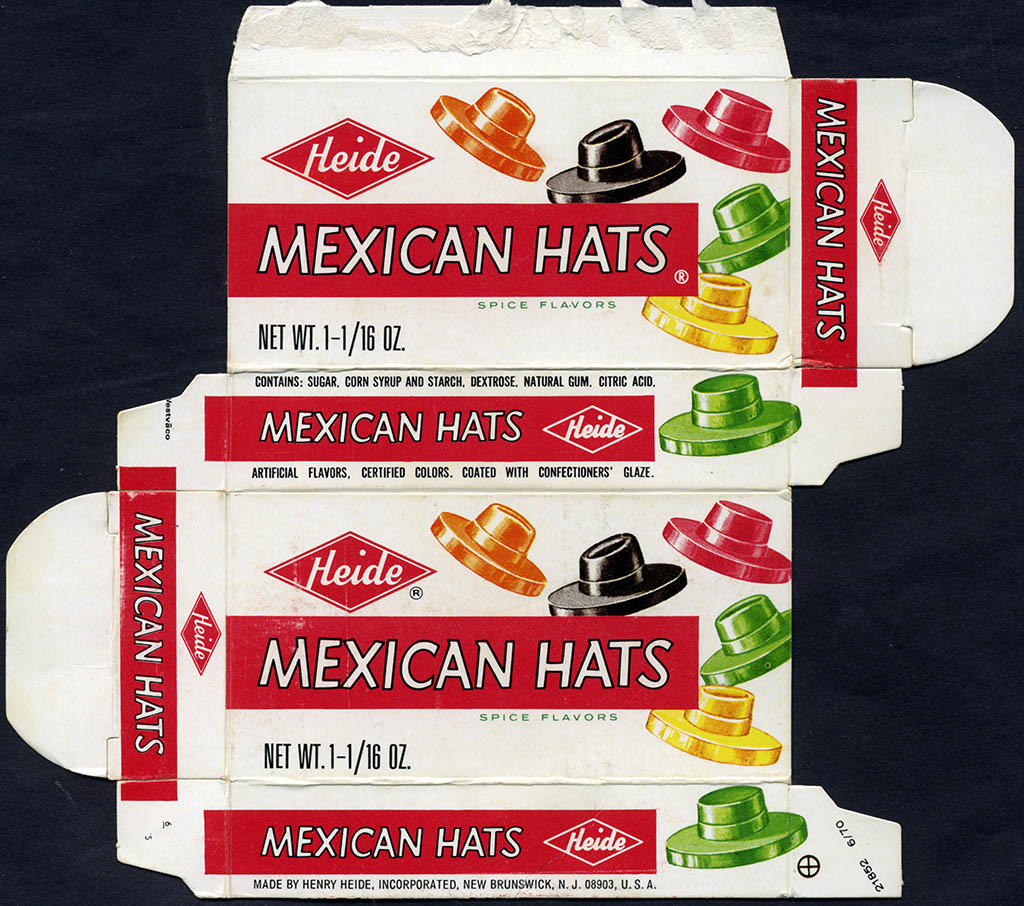 You’ll notice that the background of this actual Mexican Hats box is white, as opposed to the yellow used for the Martain Hats parody.  I have long-wondered about this.

My first thought is that I simply don’t have the correct box; that at some point after this white box was on shelves, a yellow version was produced.  As I highlighted here on the site yesterday, candy packaging is periodically tweaked and adjusted.  So a color change is the most likely possibility.

Another scenario is that the Wacky Packages artist made a choice to change the colors, perhaps to strengthen the look of the final sticker by making the background yellow.  But this seems unlikely based upon the fact that packaging colors and layouts were strictly adhered to with the parodies in Wacky Packages.  I can’t think of any examples of Wacky Packages with altered background colors as an artistic choice.

So, while I can’t be 100% sure that one exists – I do remain ever on the lookout for a 1970’s Mexican Hats “yellow box” version to add to my collection.

In the meantime, I used Photoshop to imagine how one might appear: 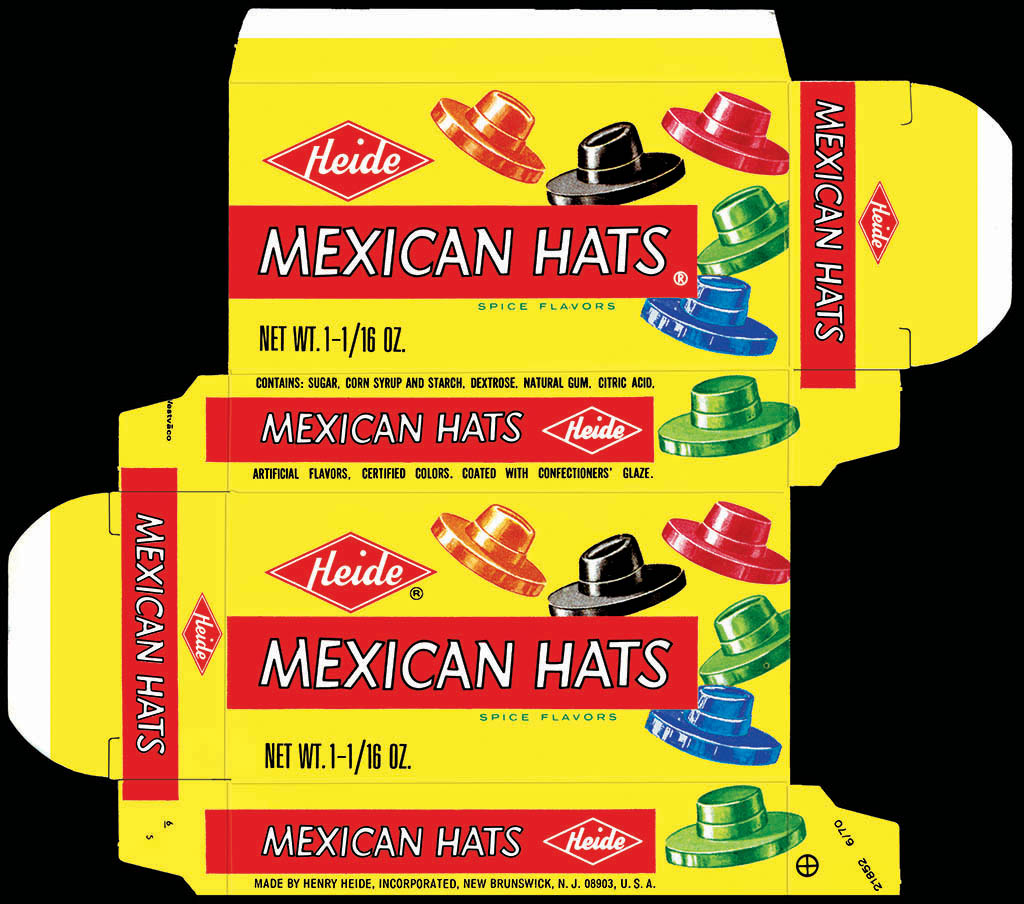 And that’s all I’ve got for today’s edition of Wacky Wednesdays.  See you next time!

A New York City based writer, editor and sometimes actor. After spending much of the 1990′s in the comic book business helping tell the stories of Marvel Comics’ X-Men as series editor, he has since split his time between developing his own entertainment properties while still consulting and working on others. Having been described as “the Indiana Jones of lost and forgotten candy”, Jason is one of the country’s premier candy collectors and historians with his discoveries appearing in countless blogs, magazines, newspaper articles, and books. Always happy to share his knowledge and unique perspectives on this colorful part of our popular culture, Jason has consulted with New York’s Museum of Food and Drink and has also been a featured guest on Food Network’s Heavyweights, France’s M6 Capital, and New York’s TheActionRoom.com. My Google Profile+
View all posts by Jason Liebig →
This entry was posted in 1970's, Gum, Novelty, Topps, Wacky Packages and tagged 1970's candy, 70's candy, candy collecting, candy collection, candy collector, candy wrapper collection, candy wrapper collector, collectible, collecting candy, confectionery, confections, gummi candies, original Wacky products, packaging, product parodies, sweets, vintage candy wrapper, Wackies, Wacky Packages, Wacky Packages stickers, wrapper. Bookmark the permalink.