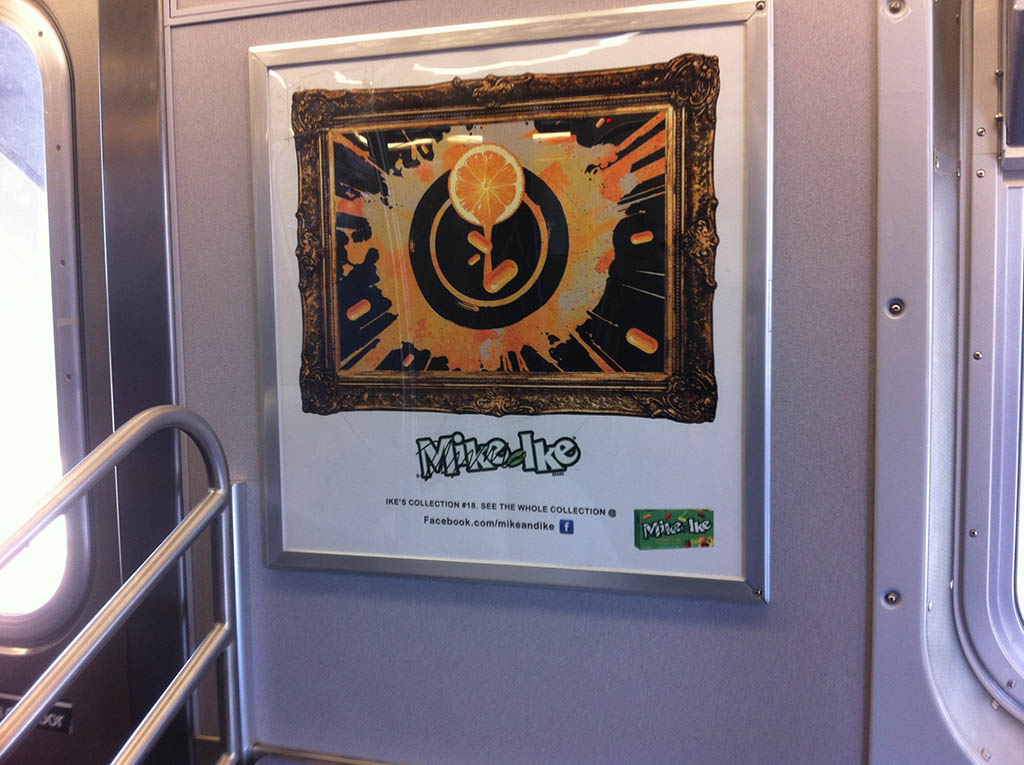 I spotted this cool bit of subway advertising on New York City’s N-line heading into Times Square this weekend.  I first wrote about this year’s big Mike and Ike campaign back on March 18th; When Mikes and Ikes get competitive – A Fun New Just Born promotion, and this is a pretty cool part of that.

I’m not used to seeing subway ads for candy,  so this really jumped out at me.   The idea here is that Ike, now distanced from Mike, has produced this piece of funky-cool art.  I can dig it.

I wondered if this campaign would catch on when I first became aware of it.  If it’s any indication, the person I was hanging with at the time stated, after looking at the poster, “I really want some Mike and Ikes now.”   Guess it’s working…

A New York City based writer, editor and sometimes actor. After spending much of the 1990′s in the comic book business helping tell the stories of Marvel Comics’ X-Men as series editor, he has since split his time between developing his own entertainment properties while still consulting and working on others. Having been described as “the Indiana Jones of lost and forgotten candy”, Jason is one of the country’s premier candy collectors and historians with his discoveries appearing in countless blogs, magazines, newspaper articles, and books. Always happy to share his knowledge and unique perspectives on this colorful part of our popular culture, Jason has consulted with New York’s Museum of Food and Drink and has also been a featured guest on Food Network’s Heavyweights, France’s M6 Capital, and New York’s TheActionRoom.com. My Google Profile+
View all posts by Jason Liebig →
This entry was posted in Uncategorized and tagged candy advertisement, candy collecting, candy collection, candy collector, candy promotion, candy wrapper collection, candy wrapper collector, collectible, collecting candy, confectionery, confections, Just Born, Mike and Ike promotion, New York City subway ad, packaging, subway candy ad, sweets, vintage candy wrapper, wrapper. Bookmark the permalink.