Though we Americans often refer to today as “The Fourth of July”, I like to refer to today by its more traditional name.  With that said — Happy Independence Day to all of my readers here in the United States.

Before I get to my candy talk today, I would like to point readers to something non-candy-related, but awfully fun – my fireworks packaging scrapbook scans.  If you want to see a bunch of 1980’s vintage-era fireworks – you can check them out by clicking here.

Independence Day was a huge milestone during the American Revolution, one where we declared our independence from Great Britain.  I’ve opted to celebrate today by showcasing a series of chocolate bar wrappers that were released by Nestle in 1977, in the wake of our Bicentennial the year before.  They were a series of wrappers featuring “Flags of the American Revolution” and I’ve gotta say, I think they’re pretty awesome.

Each wrapper shows its flag design prominently as well as providing the historical background of that flag itself.  I totally dug reading these little snippets of history, as they’re pretty fascinating.    With that – let’s get to the wrappers: 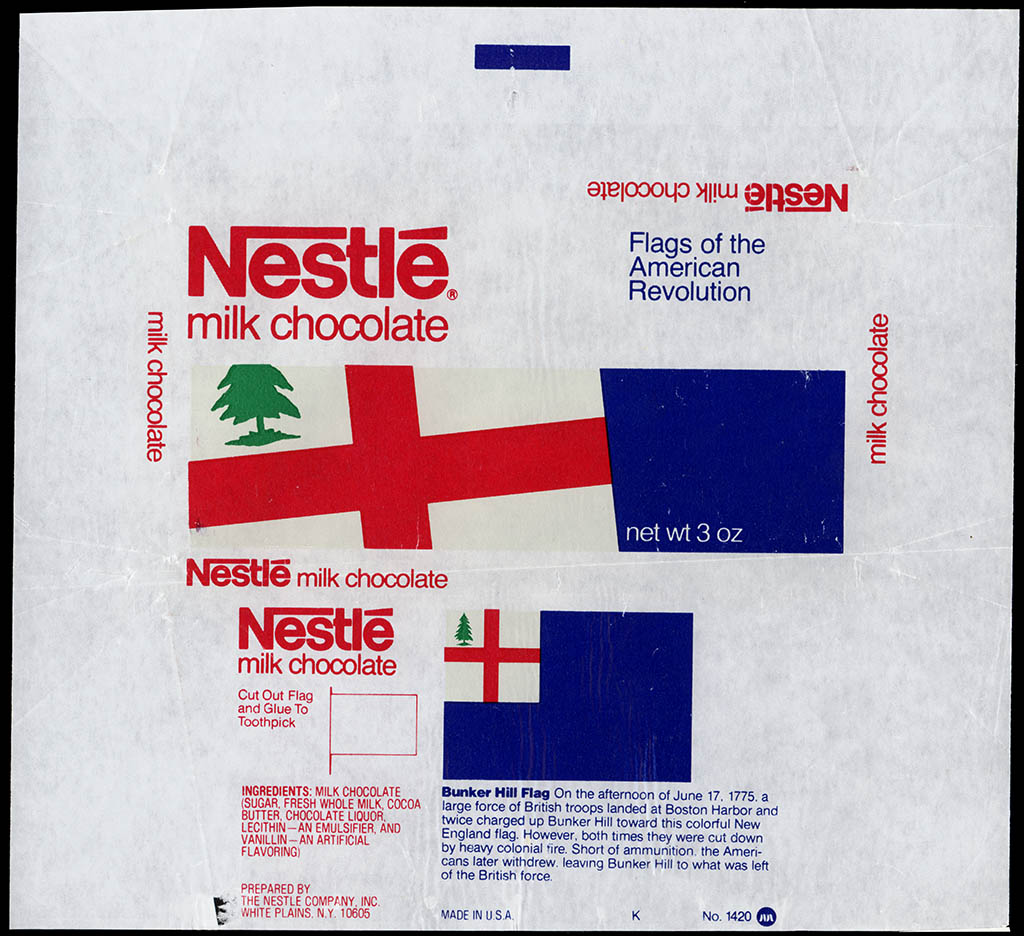 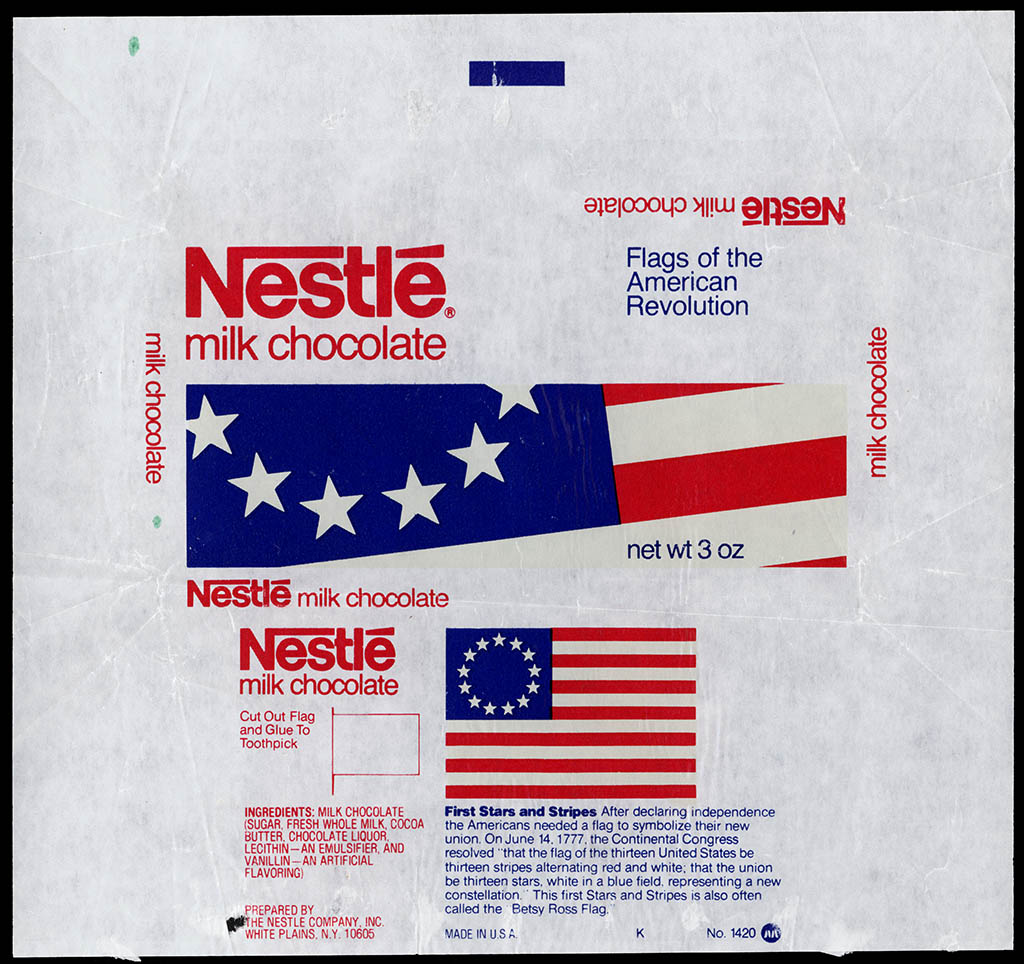 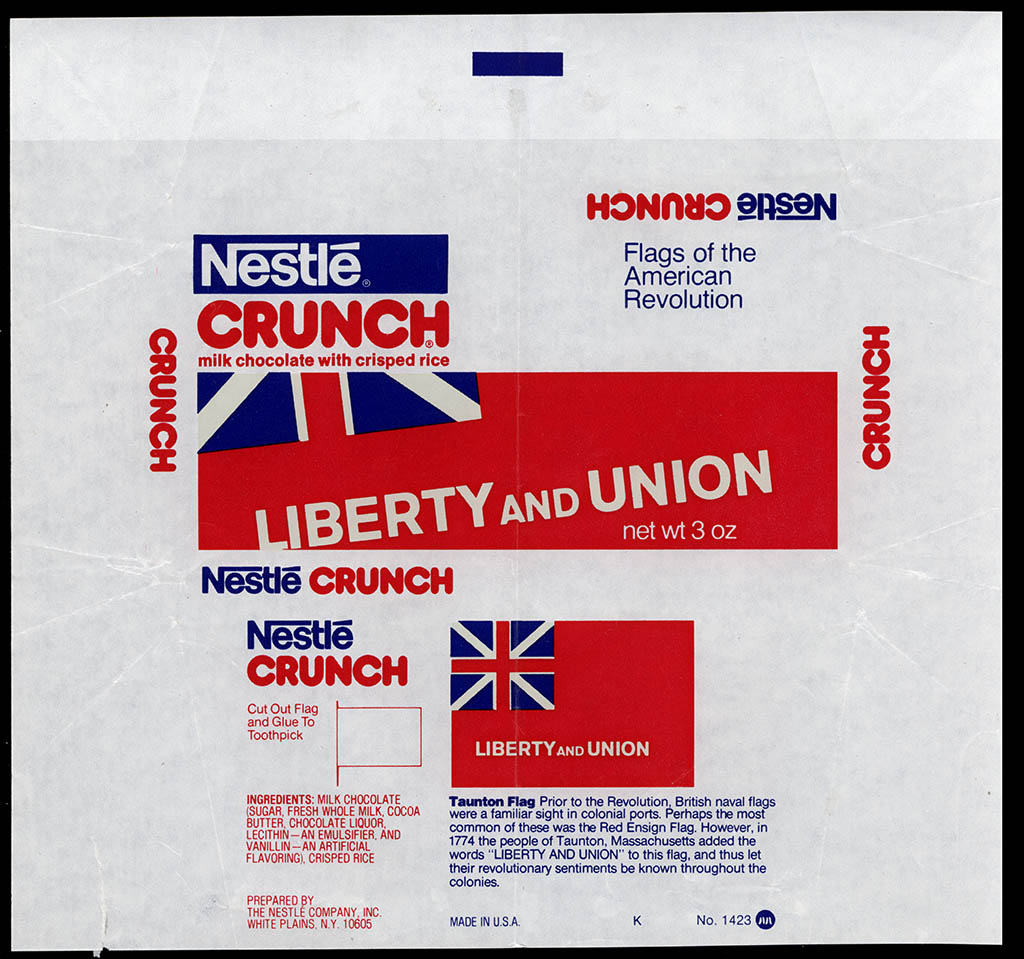 That’s all I’ve got for today.  I’m not sure if there were other flag wrappers produced, as these five were the only ones I’ve had access to.  I hope you’ll agree that the mix of cool flag-graphics and a little bit of history made for a pretty awesome series of wrappers.

Enjoy the rest of your holiday days, everyone.  See you here next time!!

[Note: Our regularly-scheduled Wacky Wednesdays column will return next week.]

A New York City based writer, editor and sometimes actor. After spending much of the 1990′s in the comic book business helping tell the stories of Marvel Comics’ X-Men as series editor, he has since split his time between developing his own entertainment properties while still consulting and working on others. Having been described as “the Indiana Jones of lost and forgotten candy”, Jason is one of the country’s premier candy collectors and historians with his discoveries appearing in countless blogs, magazines, newspaper articles, and books. Always happy to share his knowledge and unique perspectives on this colorful part of our popular culture, Jason has consulted with New York’s Museum of Food and Drink and has also been a featured guest on Food Network’s Heavyweights, France’s M6 Capital, and New York’s TheActionRoom.com. My Google Profile+
View all posts by Jason Liebig →
This entry was posted in 1970's, Chocolate, Nestle and tagged 1970's candy, 70's candy, 70's candy wrappers, Bicentennial candy, candy collecting, candy collection, candy collector, candy wrapper collection, candy wrapper collector, collectible, collecting candy, confectionery, confections, packaging, sweets, vintage candy wrapper, wrapper. Bookmark the permalink.

1 Response to Celebrating America’s Independence Day with Nestle’s Flags of the American Revolution!