A Walk Through Whoppers Packaging History! 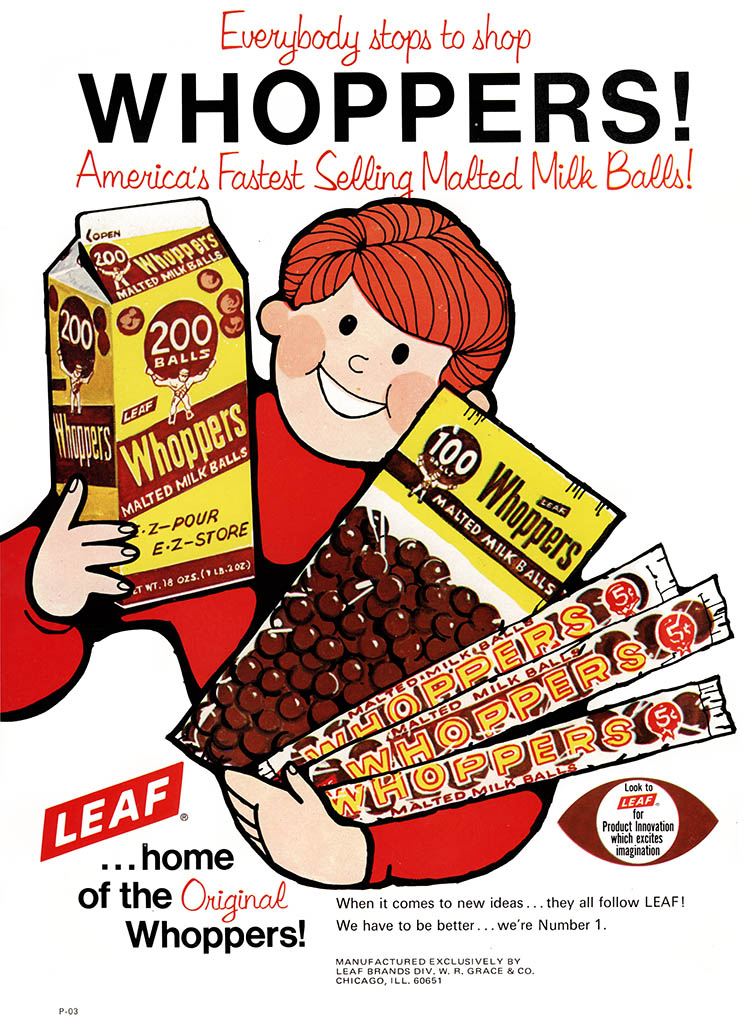 Whoppers malted milk balls – they’re a candy classic that’s been around in one form or another since 1939.

Because they’ve been around so long, they’re a daunting topic to tackle – and the task to cover them proved to be even more challenging and time-consuming than I expected.   I spent several nights going over packaging, thinking I was done, only to realize that I’d forgotten a piece.   Then I remembered the volumes of trade magazines I had to search through to ensure I wasn’t missing any cool ads or info.

Finally, I have it all here – so without further delay, let’s get to this Whopper.

As I said, Whoppers have been around since 1939.  That was the year the Overland company introduced a product called Giants, which were a larger version of their Malt-etts, a malted milk ball confection.

While I don’t have any images of Overland’s Giants, I do have an image of a pre-Leaf box for Malt-etts.

By 1950, Overland would merge with Leaf Brands, after which Giants would be renamed to Whoppers.  Here’s an early look at a Leaf-branded Malt-etts box:

In the early days of Whoppers they were sold loose out of boxes.  You would get two for a penny.  Believe-it-or-not, they were not individually wrapped – you just grabbed two out of a box and plunked down your penny.  Here’s a Leaf trade ad from 1963 that shows one of these penny-candy Whopper boxes: 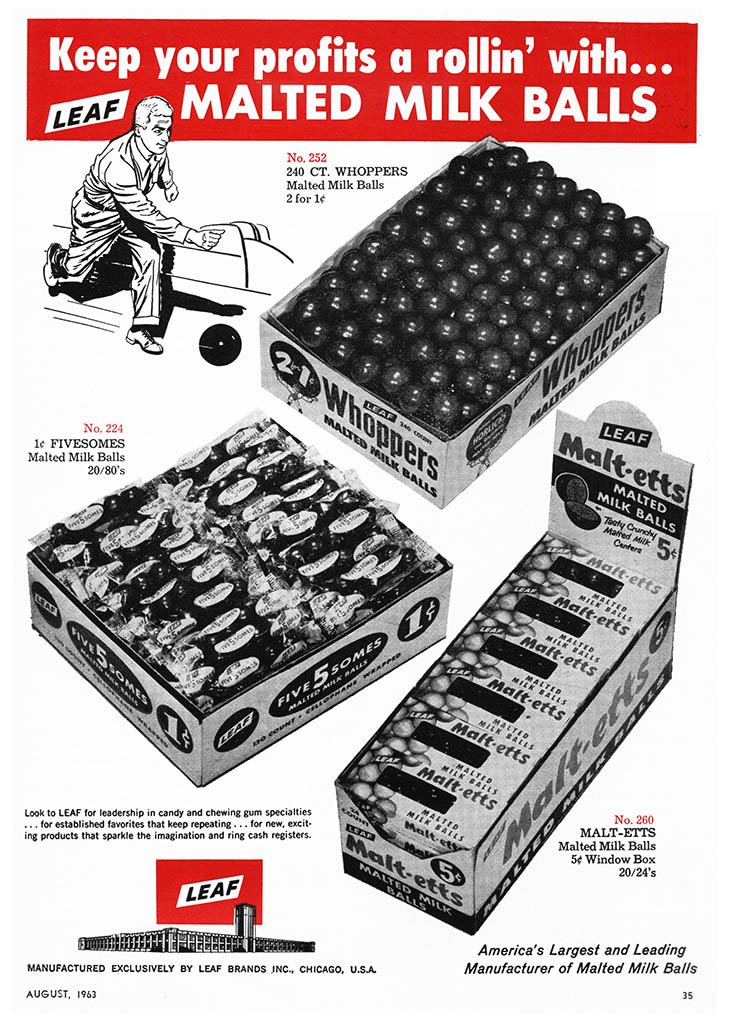 As you can see, the “strong-man” mascot was already featured on packages in 1963.  I’m not sure when that mascot was first introduced, perhaps he goes back to Whoppers introduction, but for now, this is the earliest known image.

It was during the 1960’s when Whoppers were first sold in cello tubes.  Here’s a clipping from a 1967 trade ad, showing one of the early cello packages: 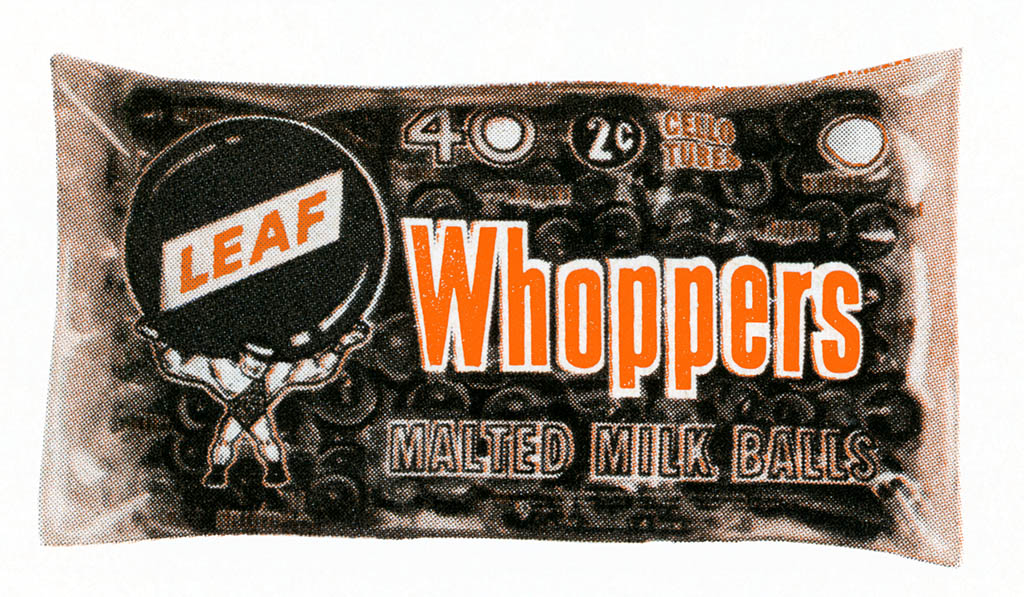 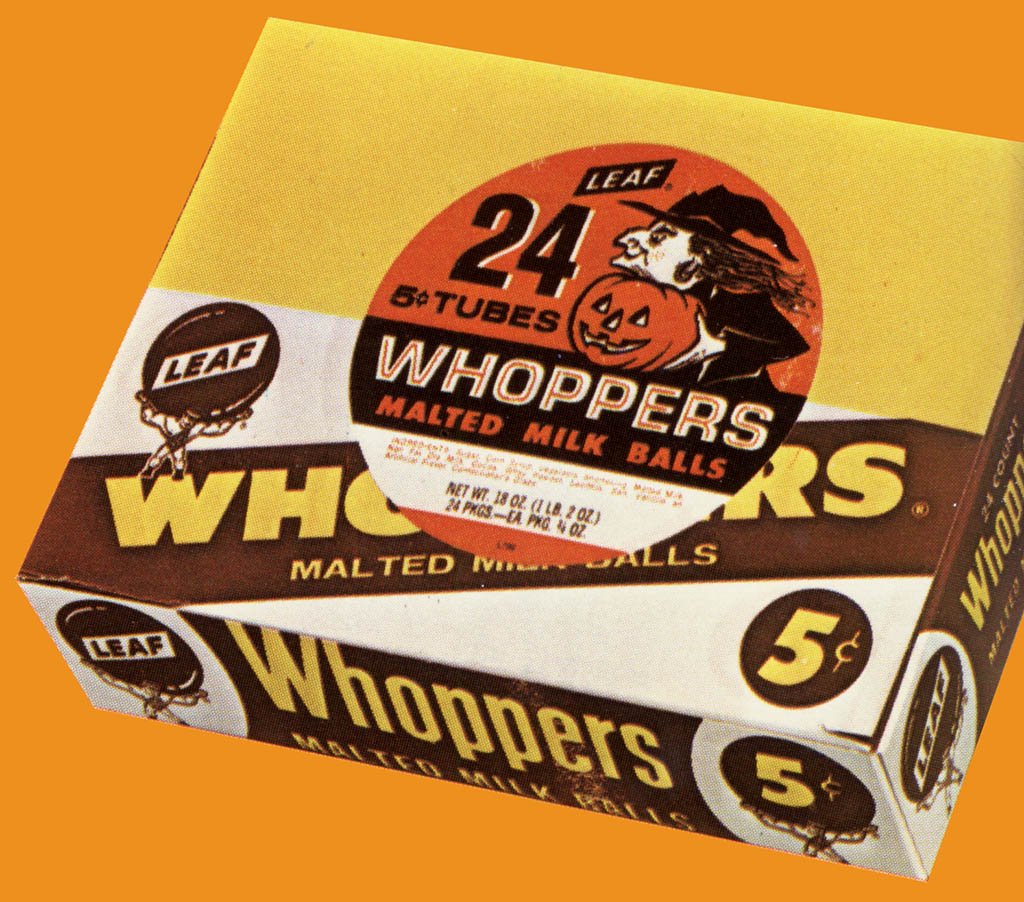 I love the look of the Halloween decal/sticker that was added to the Whoppers display box.  Would love to track one down, but I’ve never seen one.

Moving into the very early 70’s and my earliest actual examples of Whoppers packaging,  here’s the earliest cello pack I have:

That version is very similar to those used in the 1960’s… and likely only lasted a year into the 1970’s.  Here’s a later one that still features the strong man mascot, but a slightly different design:

I love the strong man mascot packaging used back then, and here’s a small poly bag package featuring the same:

Also appearing in the 1970’s are “bite-sized” Whoppers.  These look to be the Malt-etts of old, but now featuring the Whoppers branding:

The early 70’s are notable for Whoppers evolution, as I believe they saw the introduction of the first flavored Whoppers with 1970’s Strawberry variety:

The cartons pictured in that piece are a couple of my favorites, and in my collection I am fortunate to have examples of both.  These might have been the earliest milk-carton style packages for Whoppers: 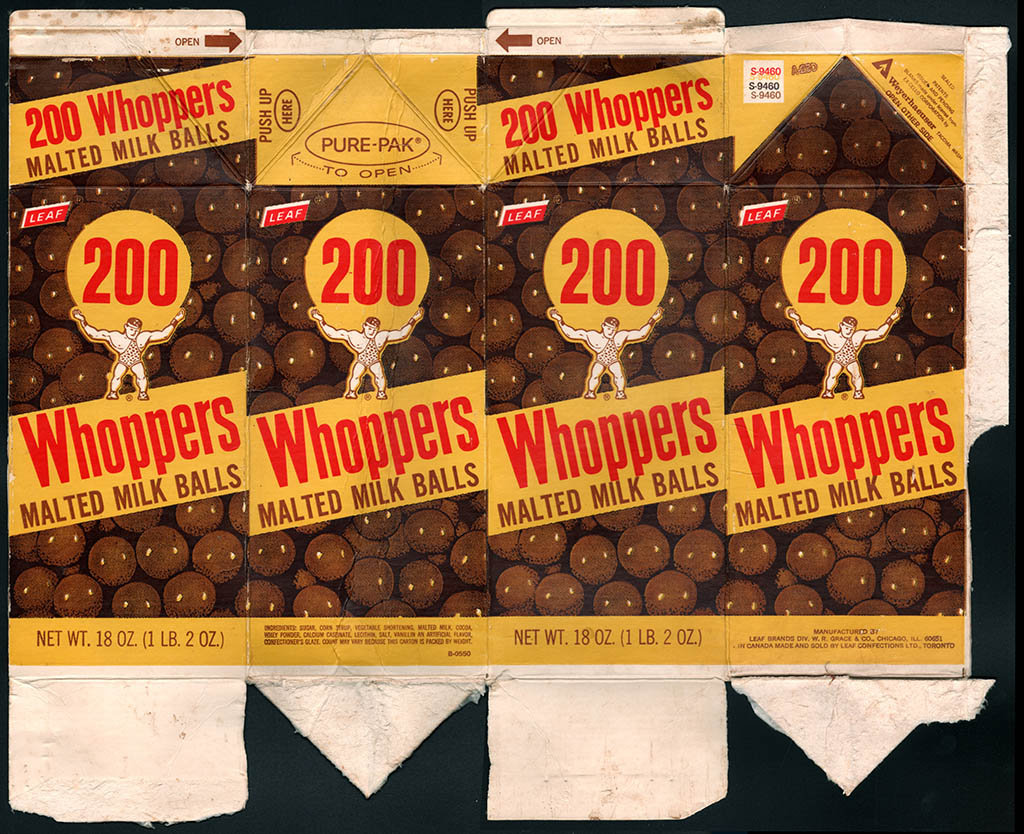 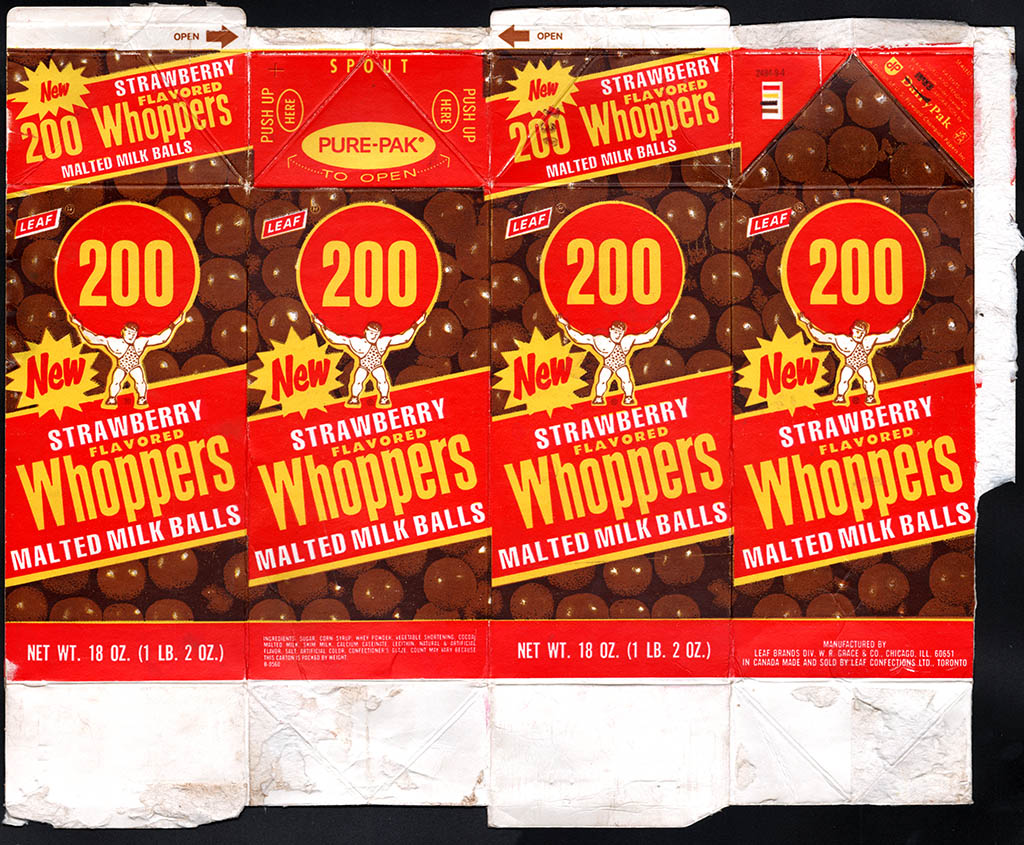 In 1975, the Whopper strong man mascot would be retired and replaced with a more graphical design:

I dig that color swoop graphic as well as the fun typeface used for the logo that they introduced in the mid-70’s.  I had known about this design for some years, but only tracked down examples of it a few months ago.   As you might expect, I was pretty jazzed to add them to my collection.   Here’s a front-and-back scan of one of the boxes featuring this design:

Here’s a trade ad from Leaf that came out in December of 1976.  If you look toward the right on this one, you’ll note that there is a package called “Super Whoppers”.  I’m not quite sure what made that package super.  Perhaps it was simply that it was a large package.

Another trade ad from the following year still features Whoppers with the color swoop design.  This must have been toward the end of the color swoop package design, as it was soon to be replaced: 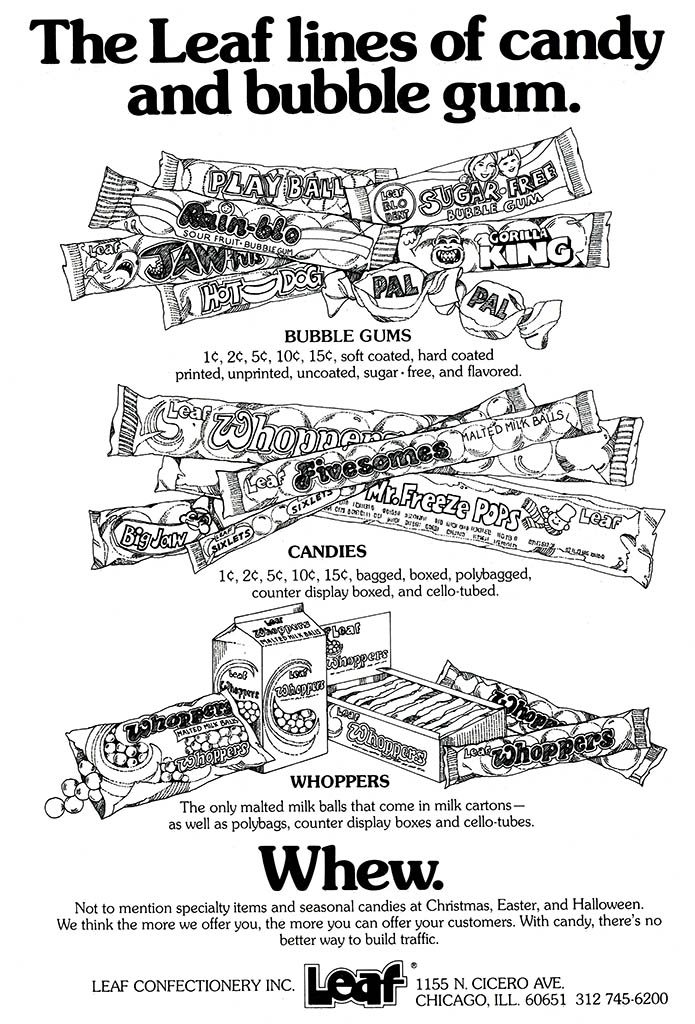 It was late in 1977 that the first redesigned Whoppers packages first started showing up – it’s a design sense that will likely be familiar to many of you:

Once this design hit, it remained largely unchanged for many years.  I have several examples of packaging from this period, though I’m not 100% certain where each piece falls in the evolution.

Soon, grams were added to the product weight information printed on the front, as well as a Whoppers recipe: 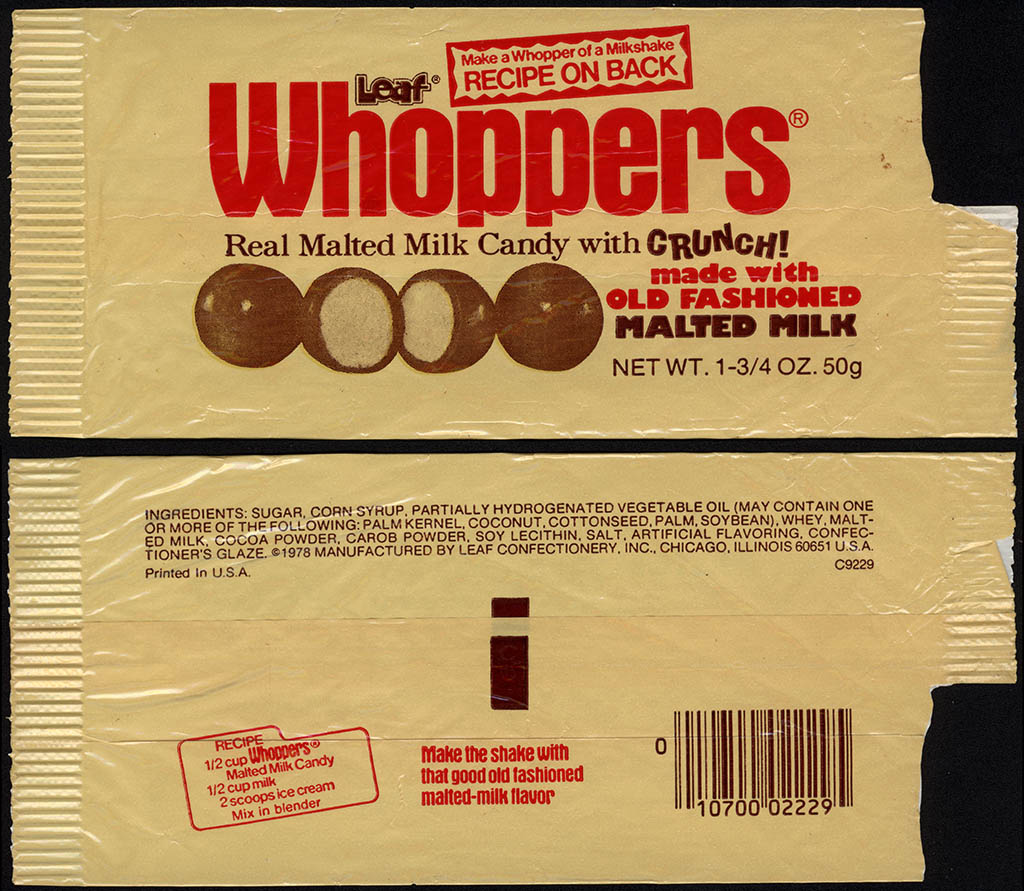 I don’t have any of the large cartons from this period, but I do have two sizes and versions of boxes: 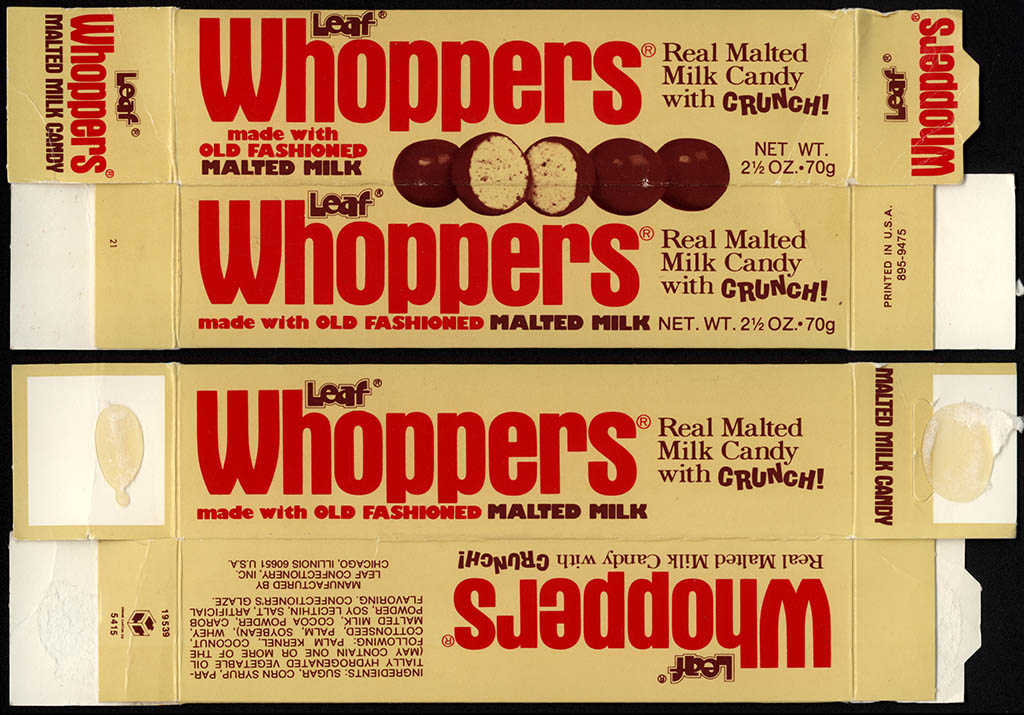 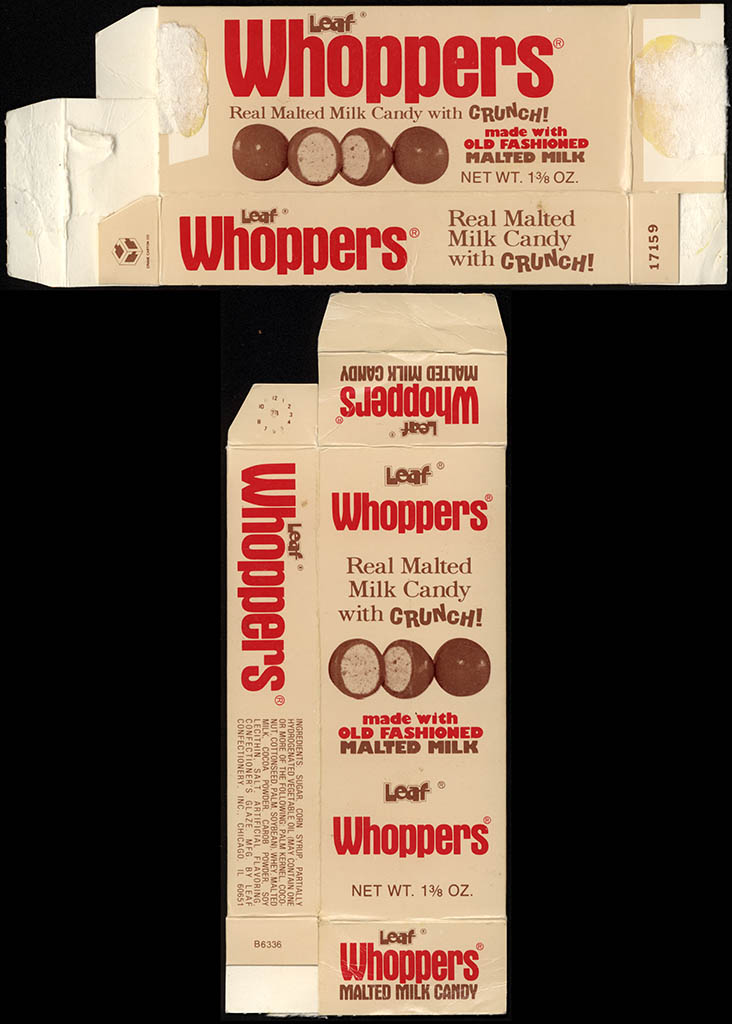 Not to be left out, here are two sizes of Whoppers cello tubes, also from the late 70’s era: 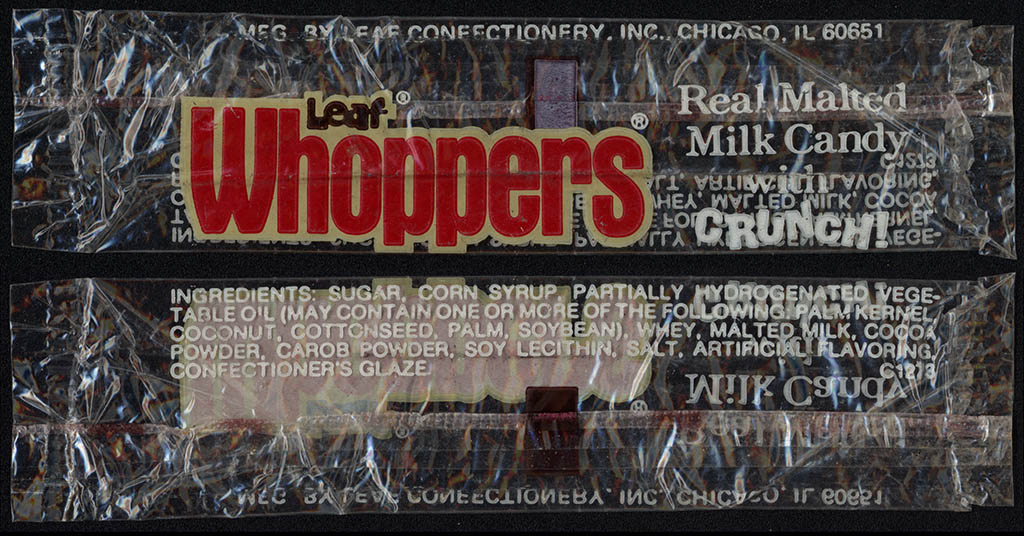 And here’s a large, 7 oz poly bag from this period: 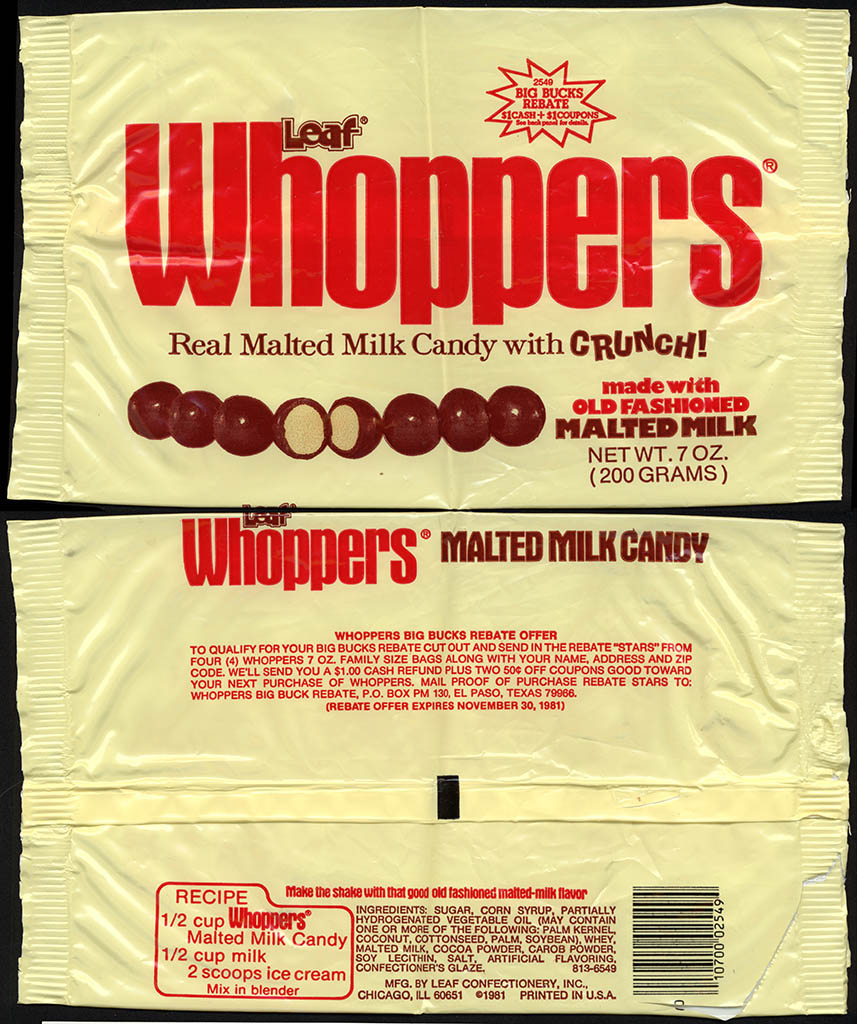 The next evolution of packaging was a minor one, but worth noting.  In 1982, the small poly package increased its size from 1 3/4 oz, to 2 oz size.  To bring attention to that fact, a banner was added to packages: 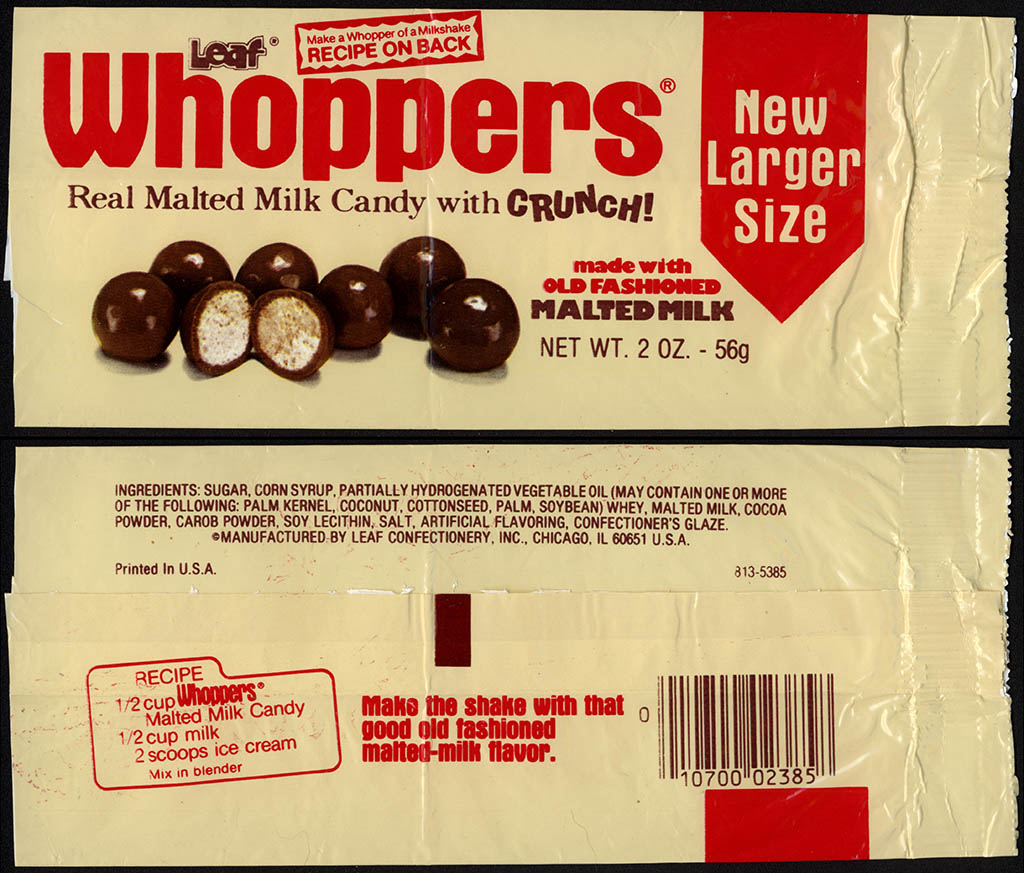 In 1984, the logo for Whoppers would get a slight update, as written about in this trade clipping: 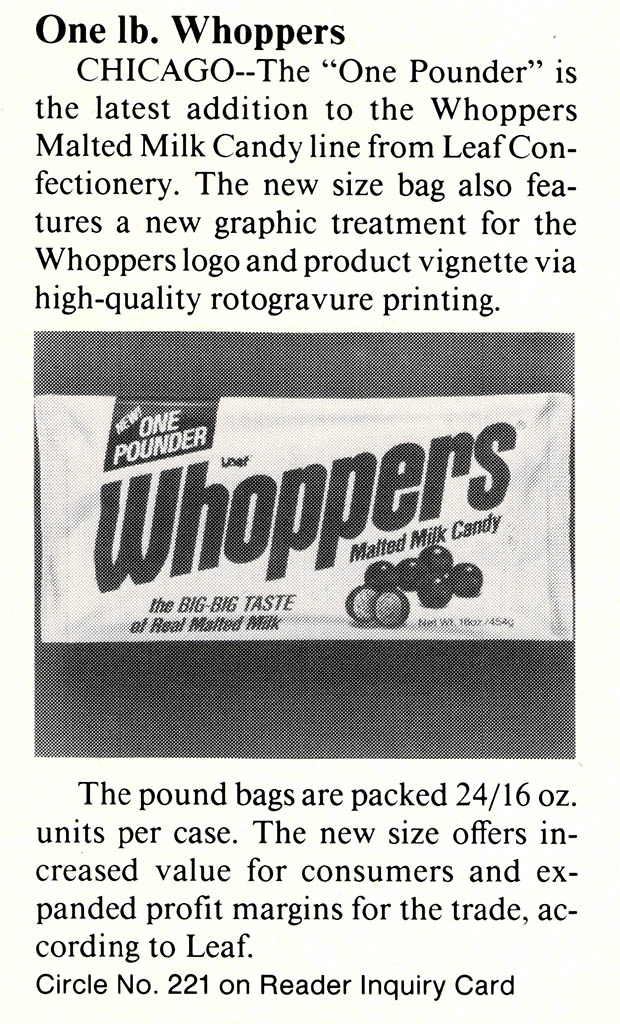 Here’s a trade ad from that same year, also featuring the updated logo:

I do have one example of packaging featuring that logo treatment, though mine has a later version of the Leaf logo than the introductory styles, so I’d place it a year or two later (1985-1987):

Back to the United States, in 1988 the Whoppers logo underwent further changes: 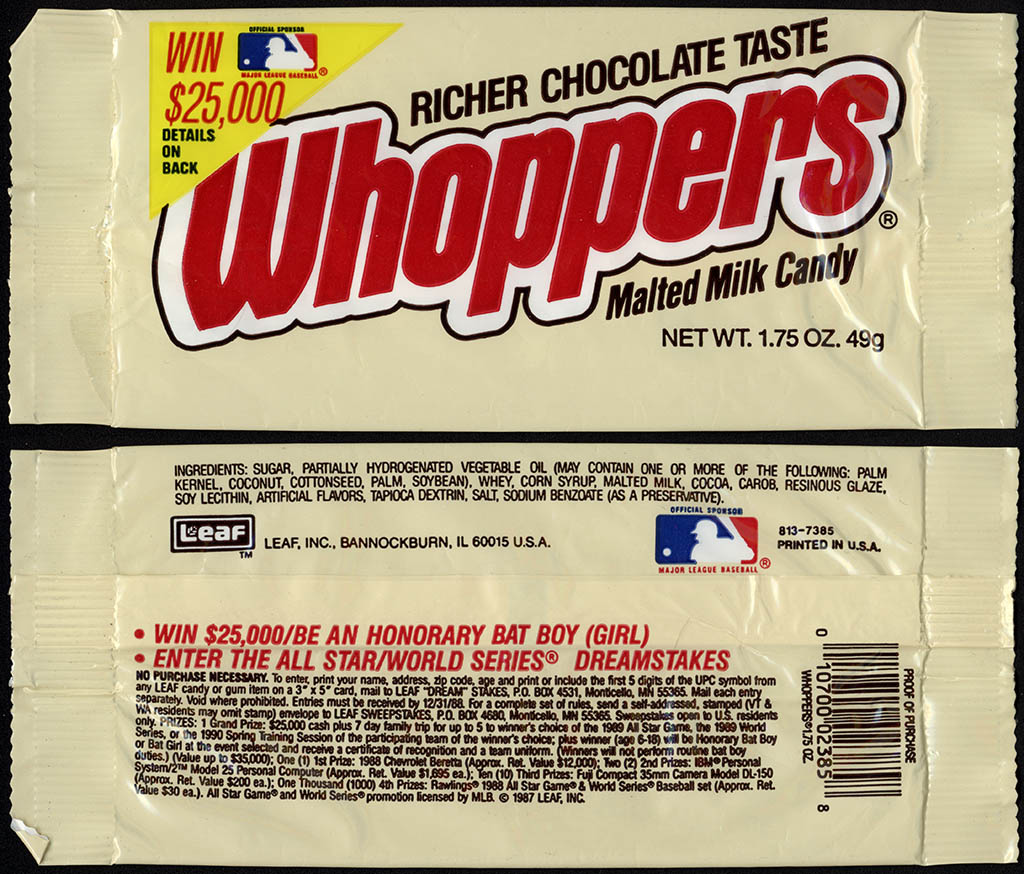 That design, as well as the affiliation with Major League Baseball, lasted until 1991, as you can see by this package and promotion: 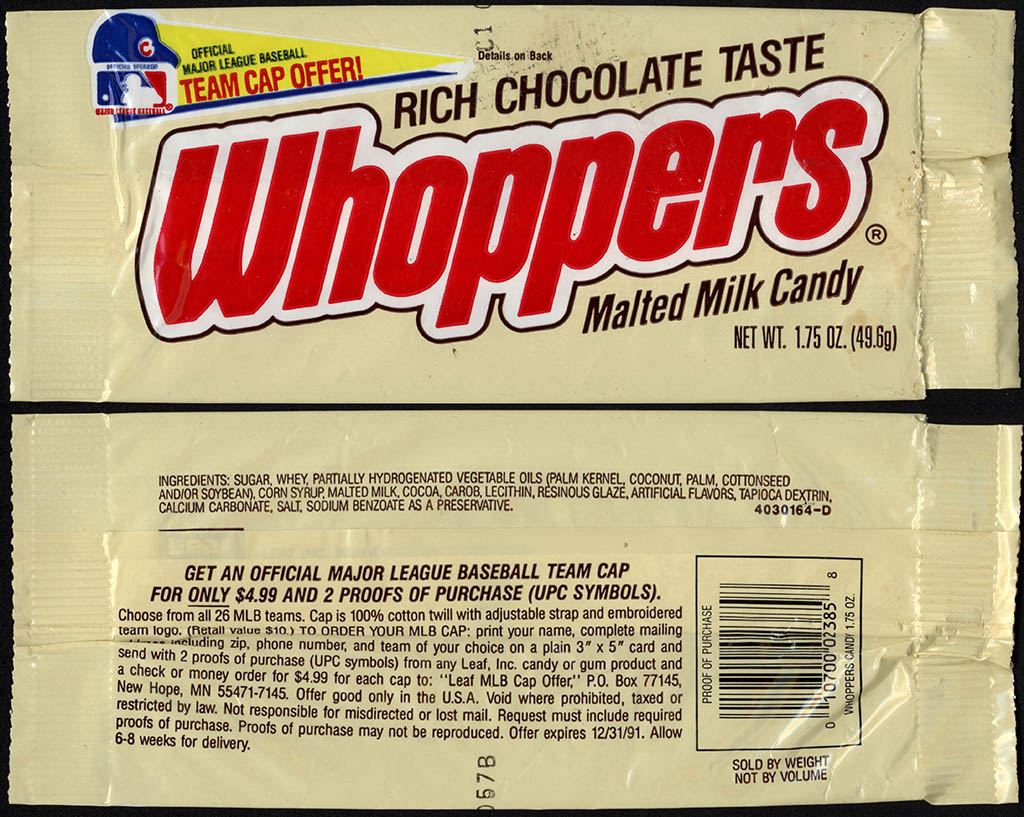 In late 1991, the Whoppers logo received another big refresh (the MLB stuck around though): 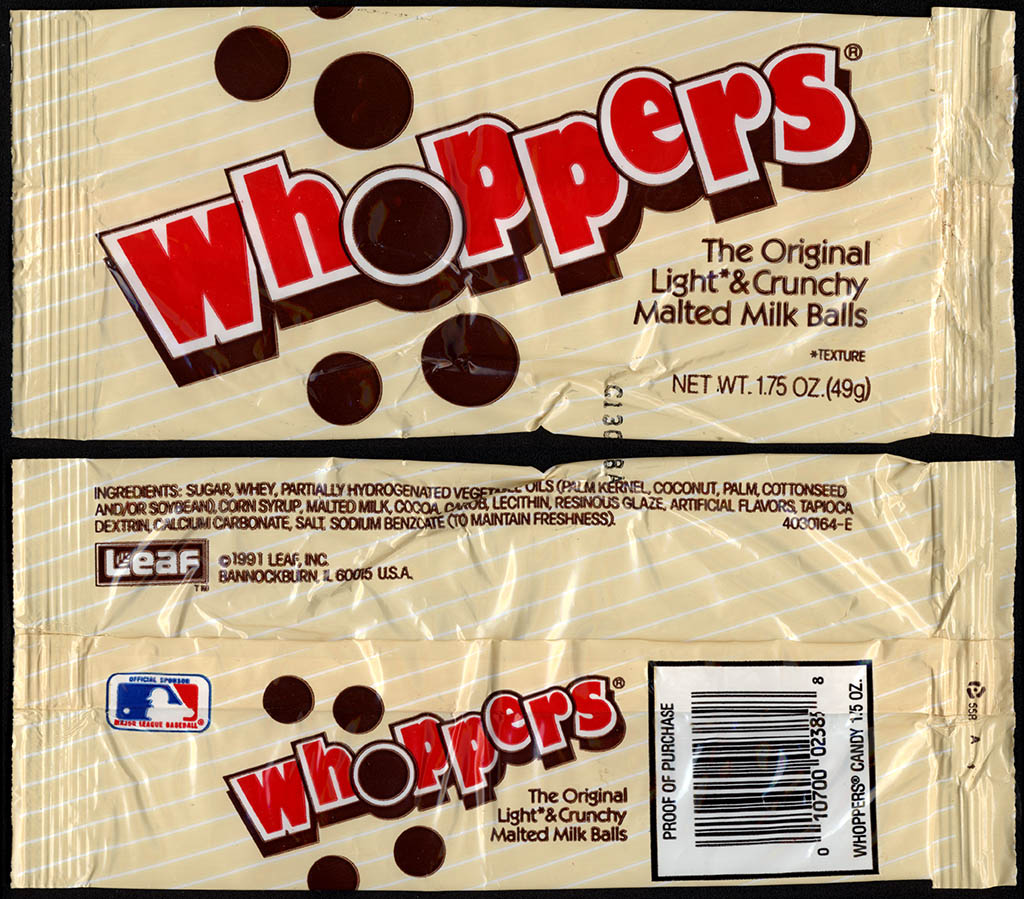 The following year, the “light & crunchy” was removed from the packaging tagline: 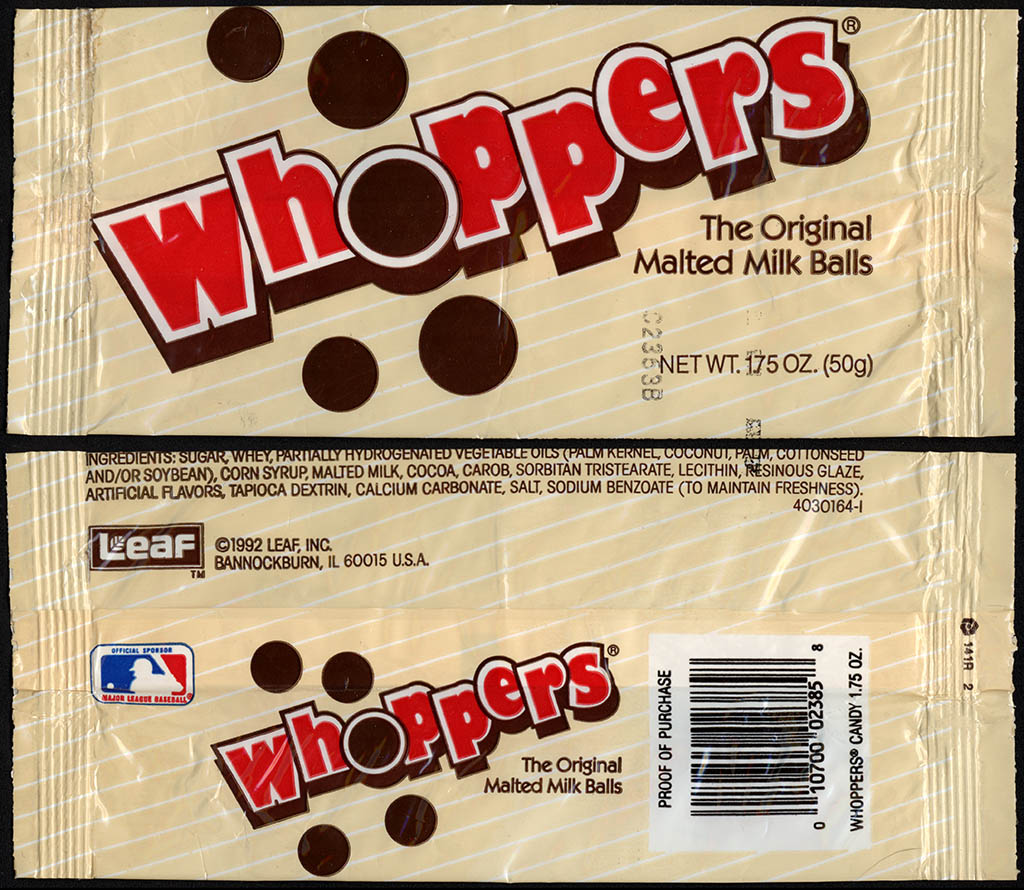 In 1993, Whoppers received a very cool Christmas holiday edition packaging.  I don’t have an example of these but I do have this black-and-white image of a display box: 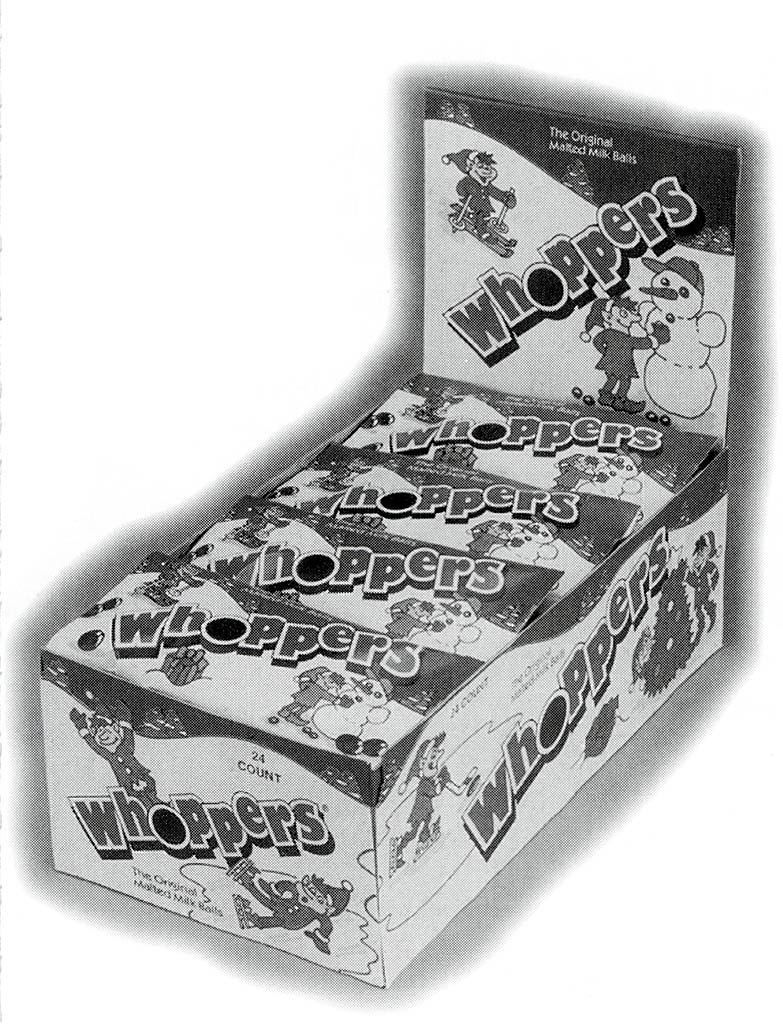 By the mid-1990’s the most notable change to Whoppers packages was the inclusion of the Nutrition Facts panel: 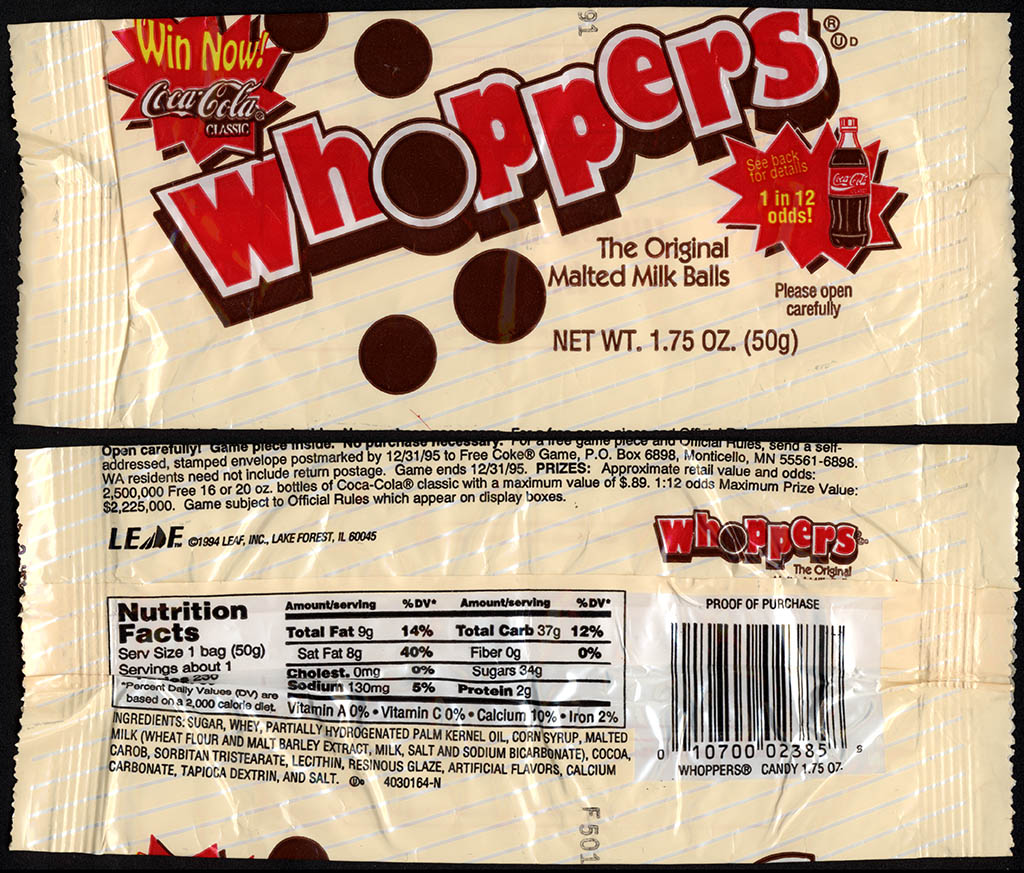 At this point, my packaging knowledge jumps forward a bit, to the late 2000’s – the current era.  But even within this era, there are some interesting tidbits.

First, let me get to the design that graces the packages now on shelves: 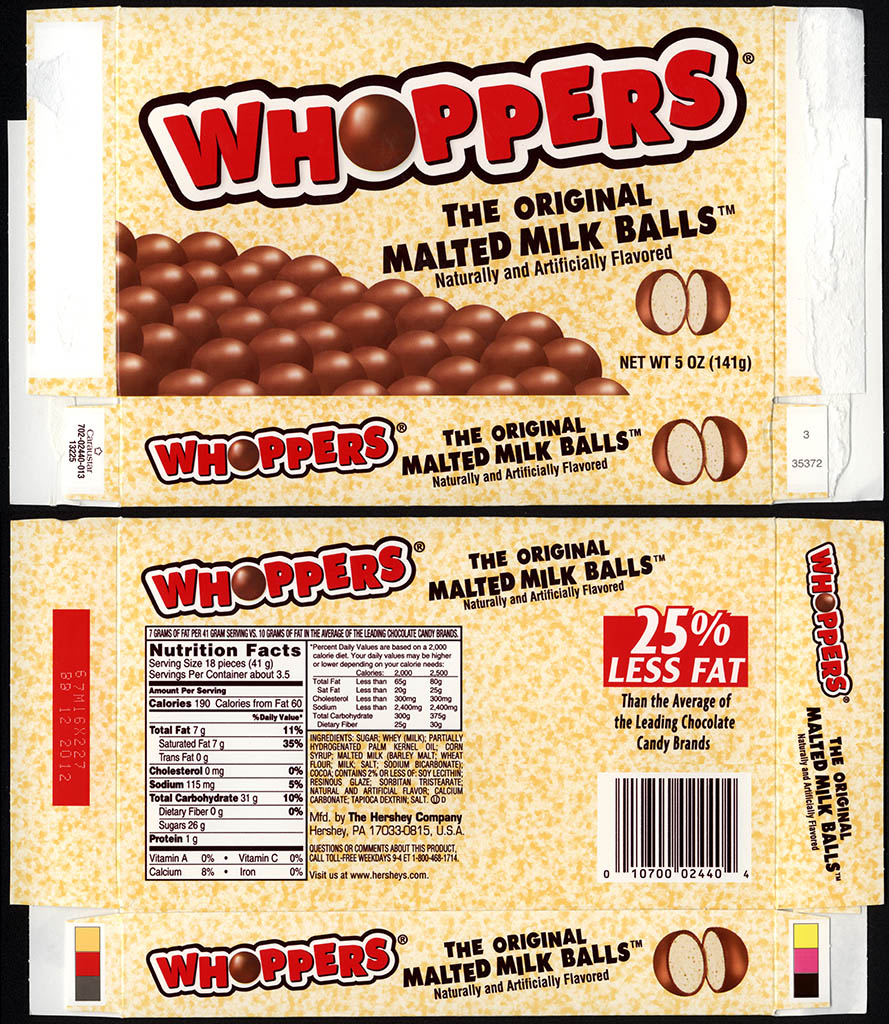 As you can see, after having been produced by Leaf for decades, Whoppers are now a product of Hershey.   Hershey took on the Leaf line toward the end of 1996.

In my experience, today Whoppers are most often found in the 5 oz “theater-style” box seen above, but they’re still sold in a 12 oz carton as well as smaller poly bags.  Notably, since the late 2000’s, there are now three flavors of Whoppers available year-round: regular, strawberry milkshake, and Reese’s peanut butter. 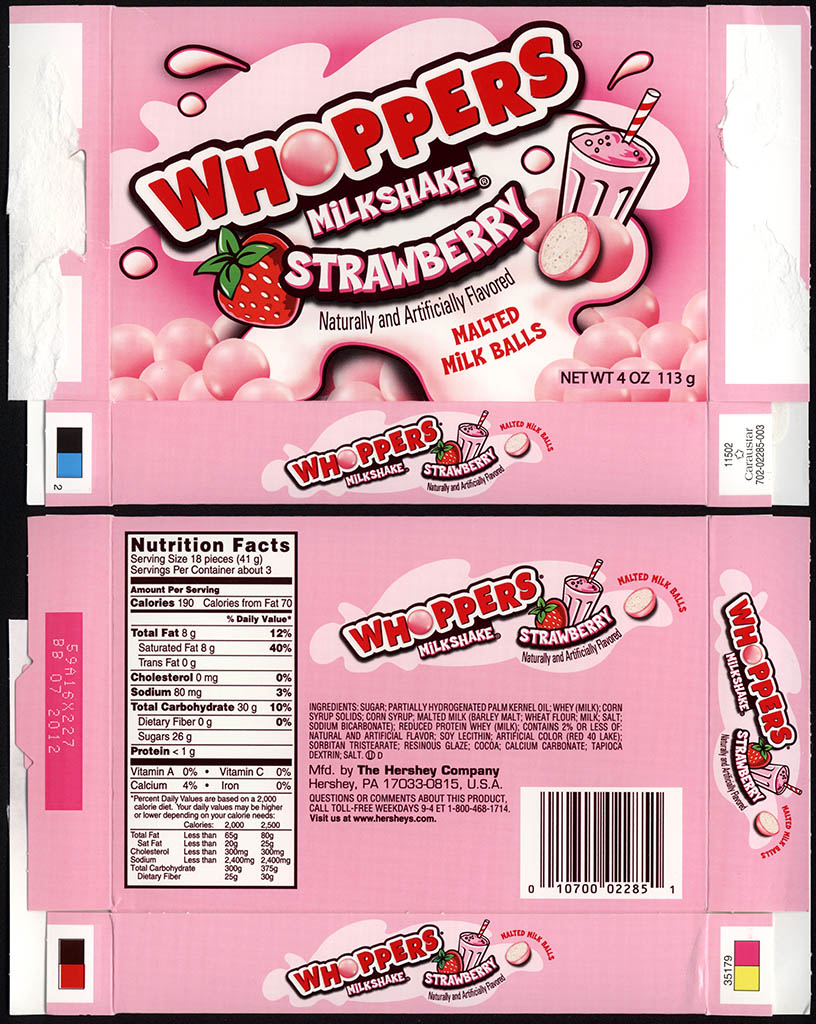 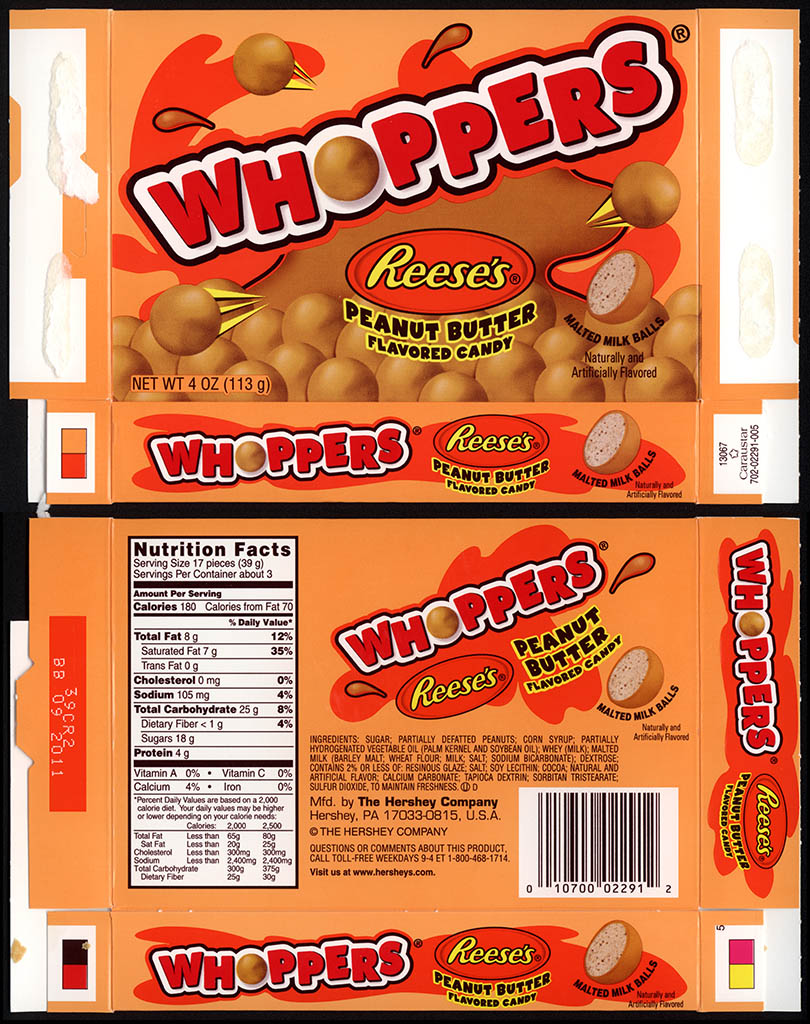 Though I somehow missed them when they were out (drat!), just a few years ago, the Whoppers Milkshake flavors extended a bit further, at least during the Easter holiday.  Here are a pair of photos showing Whoppers in blueberry, vanilla, and orange creme milkshake flavors: 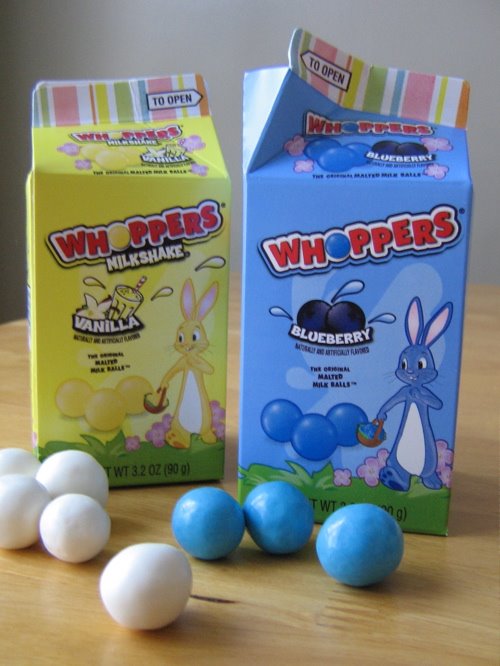 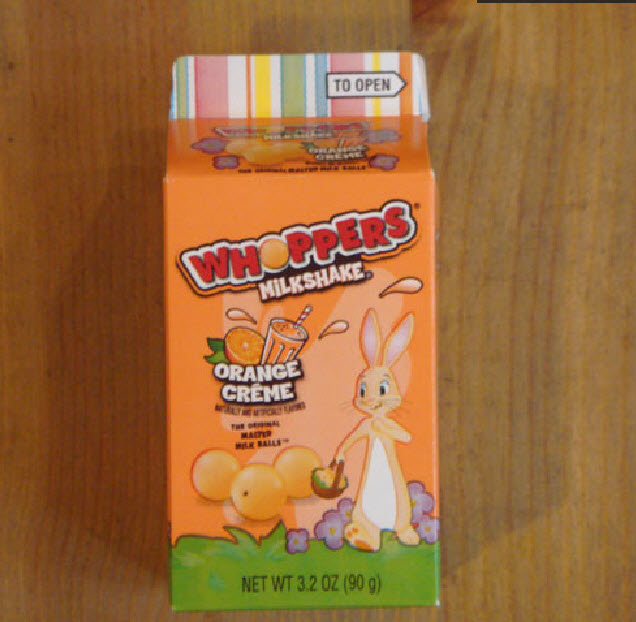 Somehow I missed out on that trio of awesome Whoppers releases back in 2009.  It just goes to show that even when you routinely hunt for candy stuff, you can miss some really neat ones!  The packaging for those three are now on my want list, if anyone ever comes across them.

I do have a few more fun pieces that don’t easily fit within the standard timeline, so they landed here at the end.

First up is a retro packaged Whoppers mini-carton I found at Wal-Mart back in 2008.  I almost passed this one over, but I’m glad I didn’t, as I never saw it again.  It features a re-drawn version of the classic Whoppers strong-man mascot: 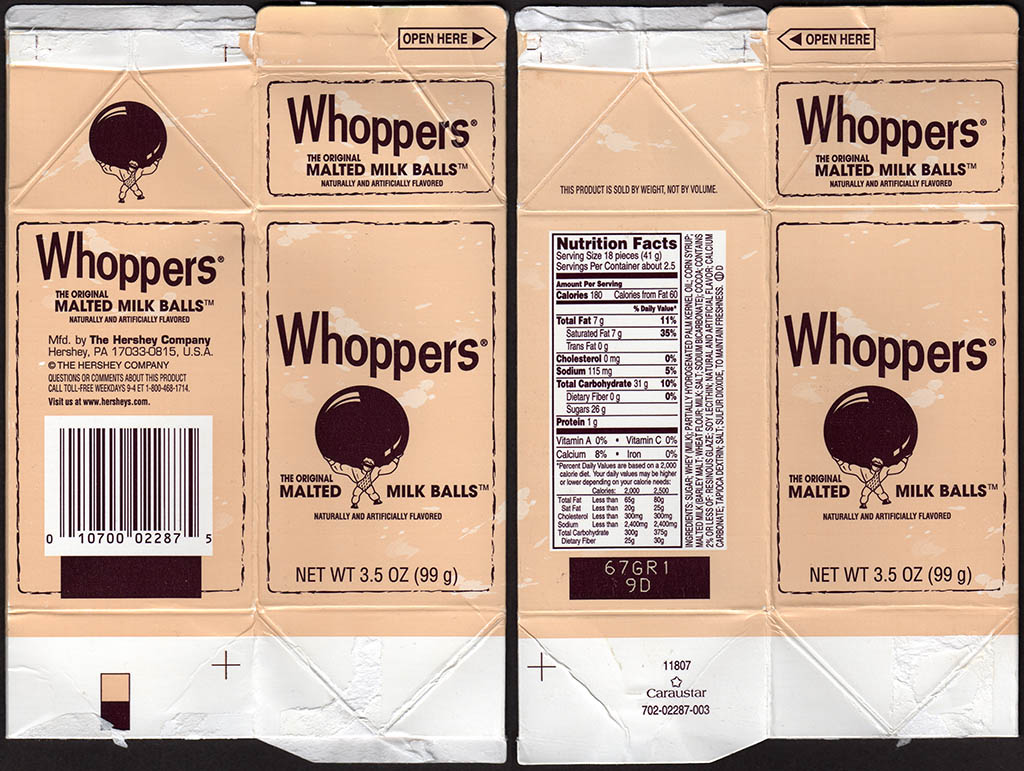 Next up is an early 70’s cello pack for Leaf’s Sno-Balls: 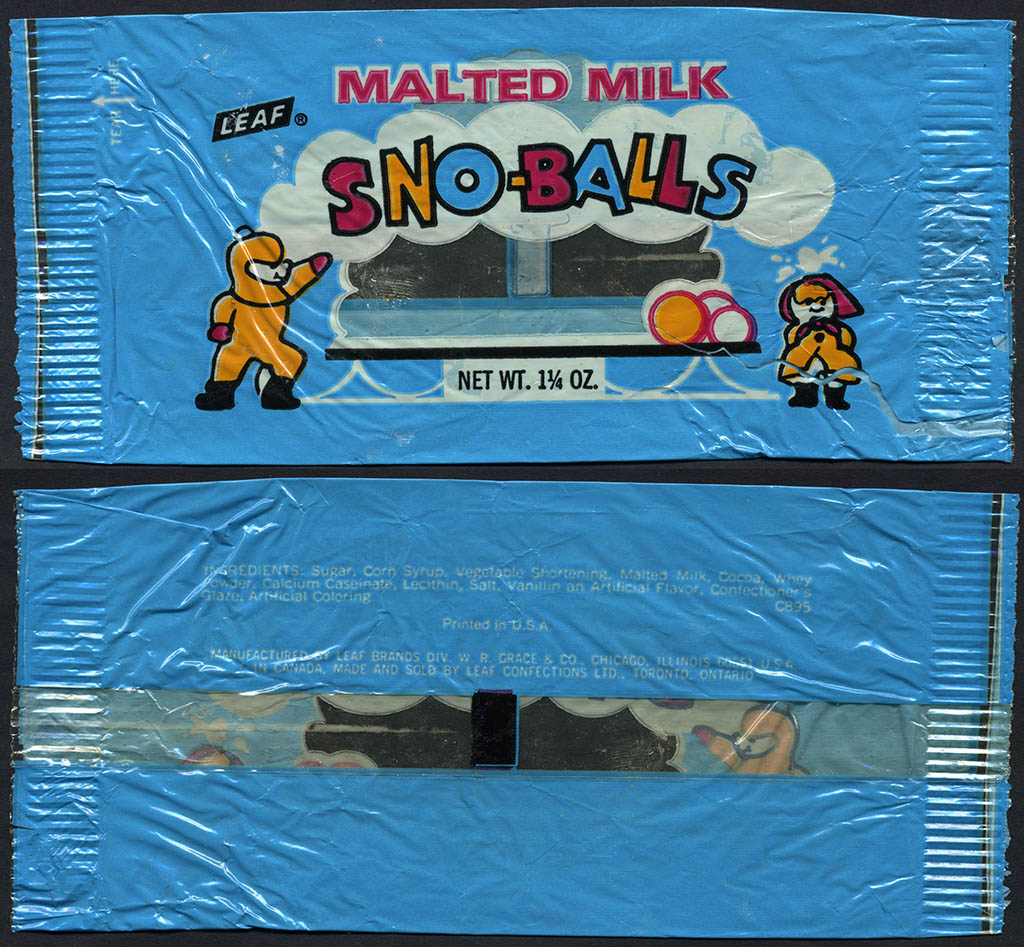 Sno-Balls were the Christmas-themed candy-coated cousin to Whoppers and these days when you find them they include Whoppers branding, as you can see on this Santa’s Workshop mini-carton from 2010: 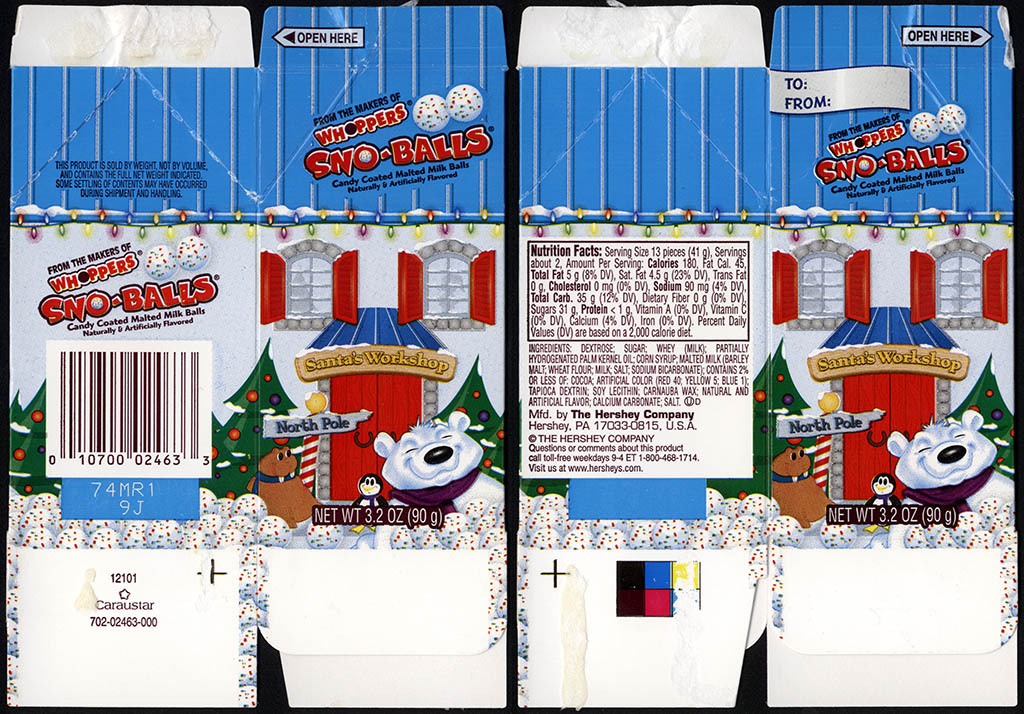 Lastly, an early 70’s example of a Leaf’s Speckled Eggs cello package – another seasonal Whoppers relative, and one worth including today: 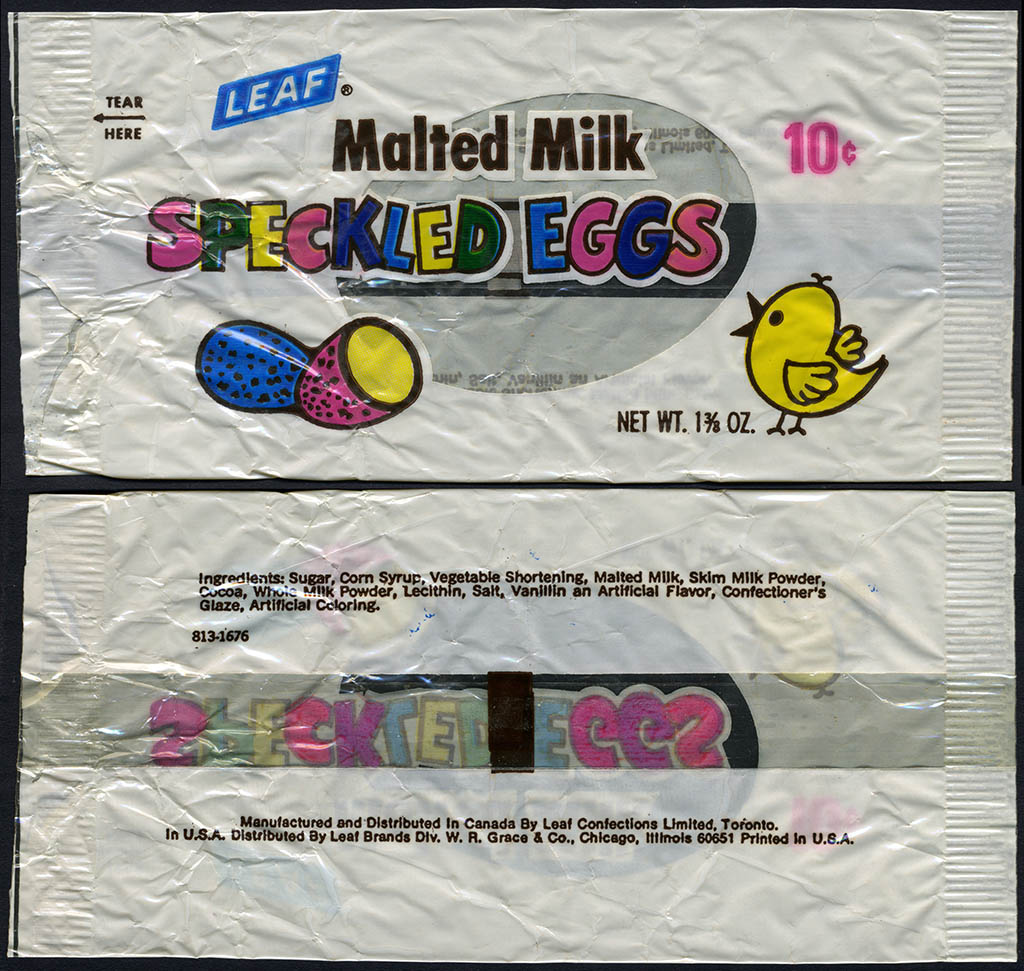 And that’s everything I’ve got to share with you regarding my walk through Whoppers packaging history today.

There are likely many holiday editions I missed or don’t know about, as well as early packaging I simply have never found images or examples of.  There’s also the 1997-2007 era of Whoppers packaging that I don’t have, though I suspect it matches either the late 90’s or late 2008 versions I do.   Even with my extensive coverage, there’s much for me to continue to hunt for, so I will do so…

A New York City based writer, editor and sometimes actor. After spending much of the 1990′s in the comic book business helping tell the stories of Marvel Comics’ X-Men as series editor, he has since split his time between developing his own entertainment properties while still consulting and working on others. Having been described as “the Indiana Jones of lost and forgotten candy”, Jason is one of the country’s premier candy collectors and historians with his discoveries appearing in countless blogs, magazines, newspaper articles, and books. Always happy to share his knowledge and unique perspectives on this colorful part of our popular culture, Jason has consulted with New York’s Museum of Food and Drink and has also been a featured guest on Food Network’s Heavyweights, France’s M6 Capital, and New York’s TheActionRoom.com. My Google Profile+
View all posts by Jason Liebig →
This entry was posted in 1960's, 1970's, 1980's, 1990's, Chocolate, Hershey, Peanut Butter, Uncategorized and tagged 1960's candy, 1970's candy, 1980's candy, 60's candy, 70's candy, 80's candy, candy collecting, candy collection, candy collector, candy wrapper collection, candy wrapper collector, collectible, collecting candy, confectionery, confections, Leaf, malted milk balls, packaging, sweets, vintage candy wrapper, Whoppers, wrapper. Bookmark the permalink.

5 Responses to A Walk Through Whoppers Packaging History!