For this week’s edition of Wacky Wednesdays, we turn our attention to 1974’s Wacky Packages Series 6, and Bum Bums, the parody of Nabisco Confections’ Pom Poms.

Pom Poms have been around at least since the 1940’s, and along with Sugar Babies and Junior Mints, were originally a part of the Welch’s family of candies.  By the 1970’s, however, all of the Welch’s candy brands had become a part of Nabisco Confections, and that’s when this parody sticker hit shelves. 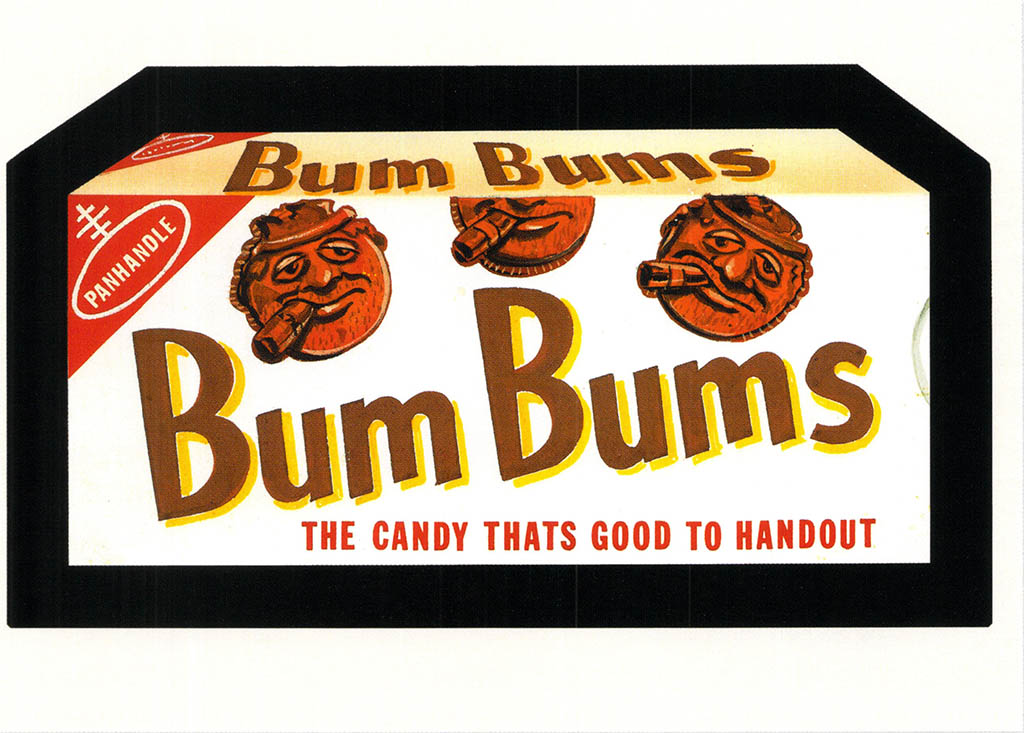 Bum Bums is a fine parody, though there’s not as much direct word-play across all the elements of the package.   I do especially like the “The candy that’s good to handout” line.

I have a Pom Poms box from the era that is very close to what was used as the basis for Bum Bums, though my box does not have a horizontal line of text in red, so mine might be earlier, or a bit later. 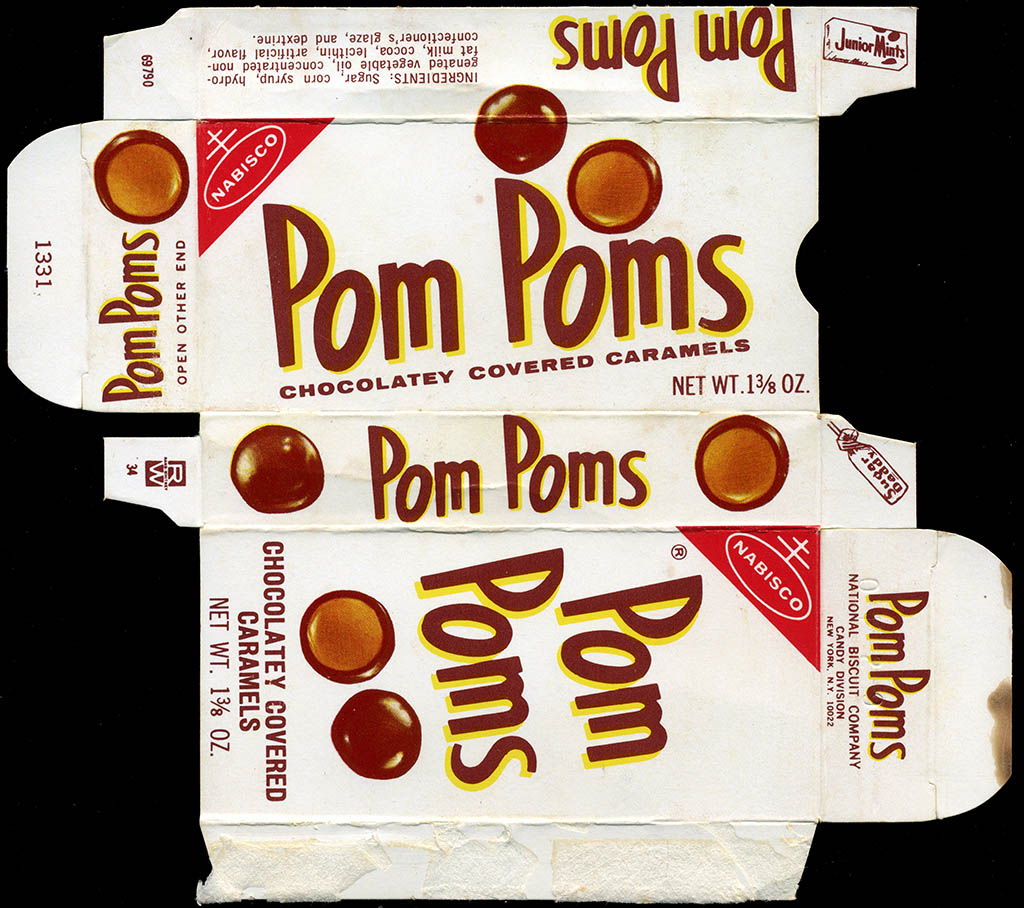 Not long after this, by 1976 or 1977, Pom Poms underwent a significant packaging redesign, so this look was already on the way out by the time it was parodied.  Here’s a look at the design that followed: 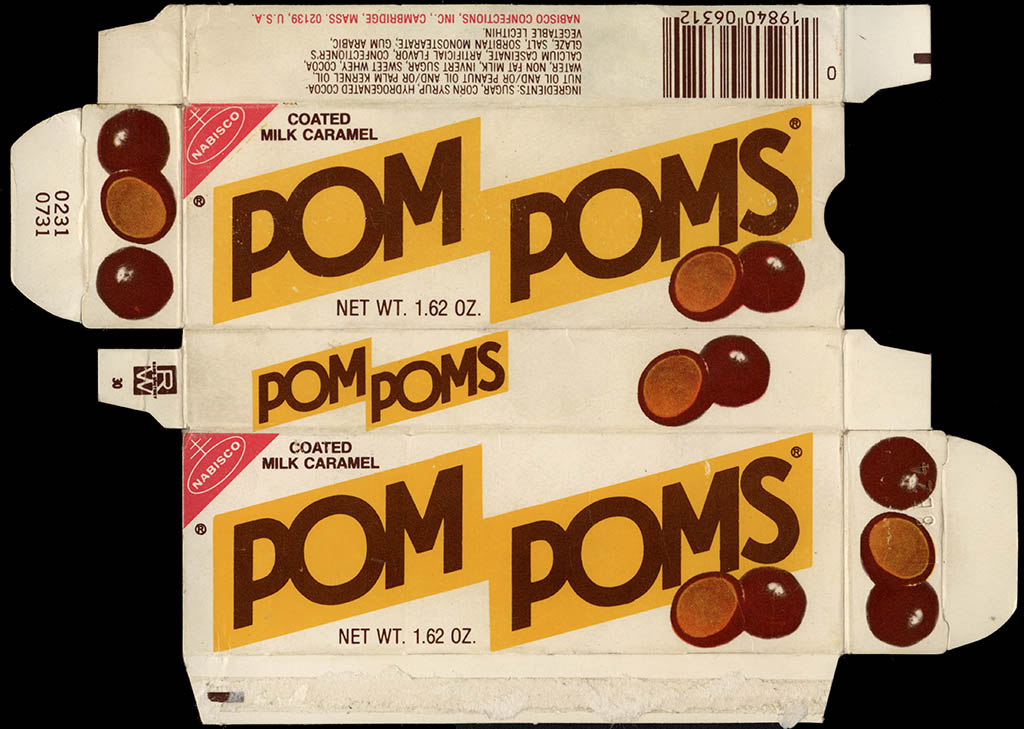 Pom Poms are still around today, though now they’ve been brought closer together with their long-time sister candies, Junior Mints;  Pom Poms are now known as Junior Caramels.

And that’s everything for today’s edition of Wacky Wednesdays.  See you back here tomorrow for more fun!

A New York City based writer, editor and sometimes actor. After spending much of the 1990′s in the comic book business helping tell the stories of Marvel Comics’ X-Men as series editor, he has since split his time between developing his own entertainment properties while still consulting and working on others. Having been described as “the Indiana Jones of lost and forgotten candy”, Jason is one of the country’s premier candy collectors and historians with his discoveries appearing in countless blogs, magazines, newspaper articles, and books. Always happy to share his knowledge and unique perspectives on this colorful part of our popular culture, Jason has consulted with New York’s Museum of Food and Drink and has also been a featured guest on Food Network’s Heavyweights, France’s M6 Capital, and New York’s TheActionRoom.com. My Google Profile+
View all posts by Jason Liebig →
This entry was posted in 1970's, Topps, Wacky Packages and tagged 1970's, 70's, candy, collectible, collection, collector, confeciton, confectionery, Nabisco, packaging, parody, retro, sticker, sweets, Topps, vintage, Wackies, Wacky Packages, Wacky Packs. Bookmark the permalink.