GORP might sound like the name of some invertebrate globular alien Star Trek character, or an odd comic book sound-effect, but it’s not – at least that’s not all that it is.  Gorp was a confectionery brand name – an acronym for “Good Ol’ Raisins & Peanuts”.

This is one of those 70’s treats I don’t really recall, possibly because it contained raisins, and while I’m sure raisins are truly “nature’s candy”, they were never really mine.  I first came across GORP in a 1970’s candy industry trade magazine, while doing candy-related research at the New York Public Library (yes, I do candy-research at the library, don’t beat me up).  I snapped a photo of the image in question, and that very photo is today’s title shot.

Though it was only a black-and-white image, I immediately became enamored with the packaging and the odd name.  It was just weird enough and just 70’s enough that I couldn’t help myself.   As I have with many of my candy first-sightings, I made a note and added GORP to my want-list of vintage candy packaging I would one day hope to find.  Lucky for me, I recently did.

From out of the wonderful L.M. Kallok Collection came not one, but two very different GORP packages.  This following package appears to be an earlier version (though it could be a later version) than the Nabisco Confections’ GORP Plus that is seen in the 1978 black-and-white photo above: 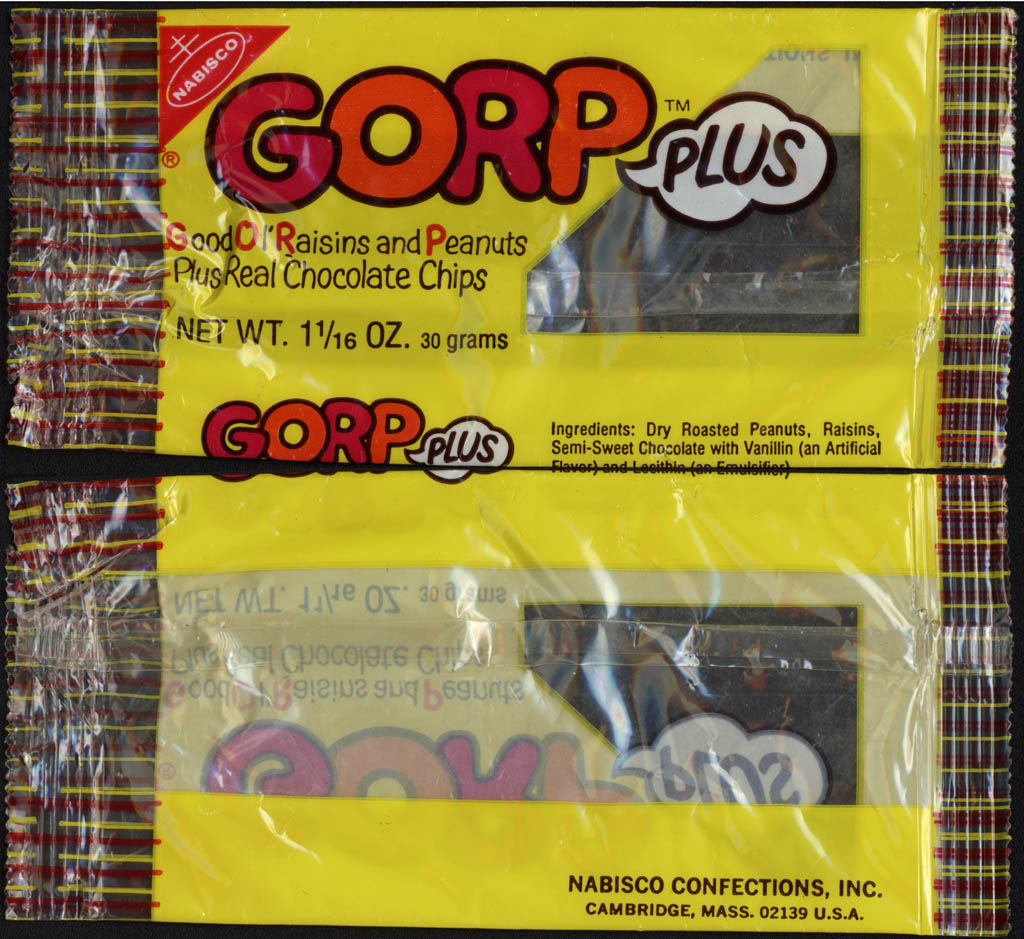 It’s great to be able to show the GORP package complete and in color – I think it’s pretty dynamite.  This next GORP package comes from 1980, and I’m not sure what to make of it: 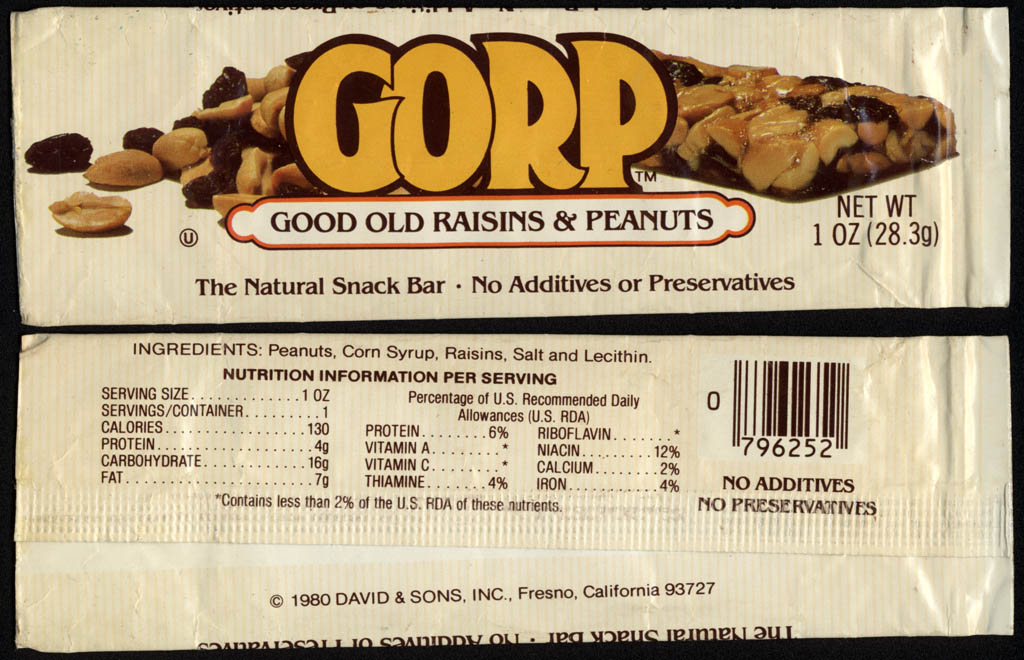 As you can see, the 1980 package is a huge departure from the design shown on the earlier ones.  Also, this version of GORP is produced by David & Sons, rather than Nabisco.  Finally, it lacks the “Plus” of chocolate chips, so it’s a move into a pure healthy bar, rather than a confectionery one.

At the moment, I don’t know the whole story on this.  Perhaps GORP was not something that Nabisco had trademarked, or perhaps David & Sons purchased the brand from Nabisco.  For now, it remains a mystery to be solved.

And that’s everything I’ve got on the oddly-named GORP.  Hope to see you back here tomorrow!

A New York City based writer, editor and sometimes actor. After spending much of the 1990′s in the comic book business helping tell the stories of Marvel Comics’ X-Men as series editor, he has since split his time between developing his own entertainment properties while still consulting and working on others. Having been described as “the Indiana Jones of lost and forgotten candy”, Jason is one of the country’s premier candy collectors and historians with his discoveries appearing in countless blogs, magazines, newspaper articles, and books. Always happy to share his knowledge and unique perspectives on this colorful part of our popular culture, Jason has consulted with New York’s Museum of Food and Drink and has also been a featured guest on Food Network’s Heavyweights, France’s M6 Capital, and New York’s TheActionRoom.com. My Google Profile+
View all posts by Jason Liebig →
This entry was posted in 1970's, 1980's, Chocolate and tagged 1970's, 1980's, 70's, 80's, candy, collectible, collection, confection, confectionery, design, GORP, healthy, Nabisco, odd, packaging, raisins, sweets, weird. Bookmark the permalink.