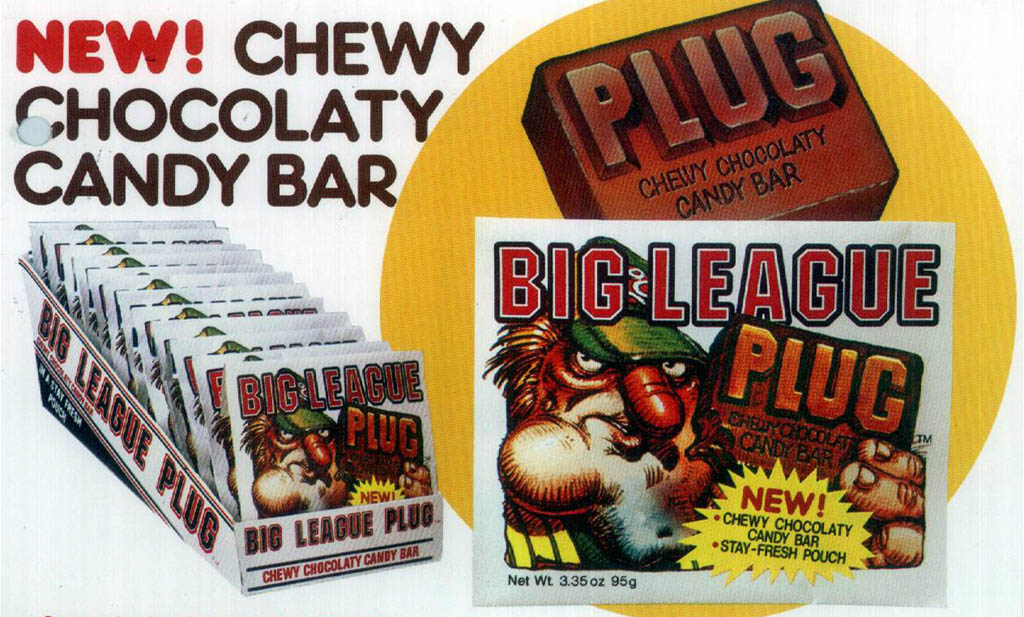 Today’s piece is a short tale of finding a collectible “Holy Grail” and how much fun it can be to track down something you thought you might never see.

The bar was first mentioned to me by Rob Nelson, the creator of Big League Chew, when I asked if there had ever been any confectionery spin-offs of his brand.  He explained that, “There was a chocolate bar they tried, called Big League Plug…”

I had never heard of Big League Plug, and certainly didn’t recall ever seeing it in my youth, so I was immediately intrigued.  I scoured the internet but found no mentions or images of this mythical product.  Did it actually exist?  Did Rob remember the name wrong?  Was it only a test-marketed item?

I would eventually track down the promotional flyer image for Big League Plug which I included in the retrospective (the same image serves as today’s title image), but it would remain the only hard evidence that Big League Plug ever existed, until two months ago.

It was when I acquired the incredible L.M. Kallok confectionery collection (a huge collection of vintage candy wrappers, boxes, and related ephemera) that I found this near-mythical piece of Big League Chew history.   Within that extensive collection was a piece I never expected to find; an actual Big League Plug foil pouch!  And to my amazement, the look of the production packaging had changed from that shown on those earlier promotional flyers.  Here it is: 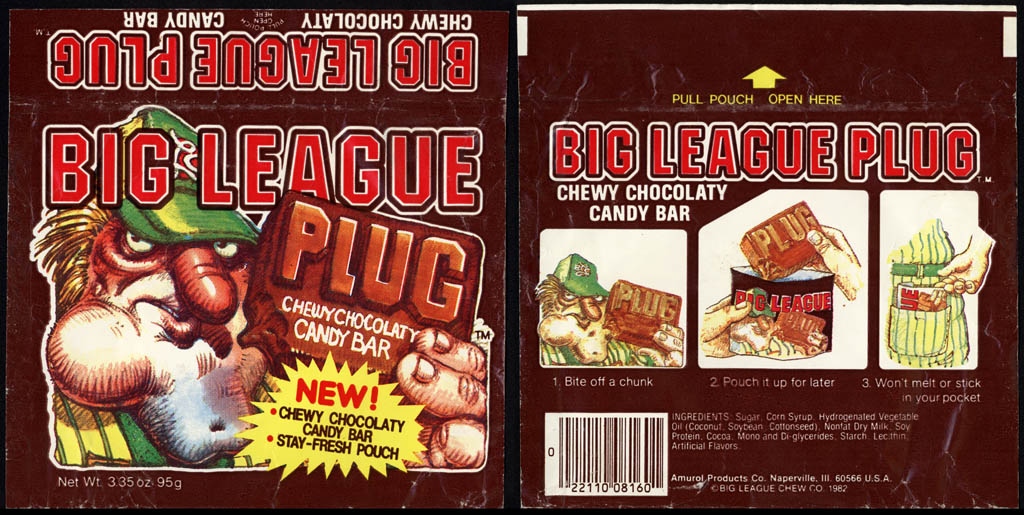 As you can see, it features a modified appearance from the standard Big League Chew bubble gum pouches while still retaining that unmistakable Big League Chew look.  To say that I was thrilled to find this and add it to my collection is an understatement.  I was, and am, over the moon.

Big League Plug was an experiment from 1982, early in the life of the Big League Chew brand, and it was short-lived.  What Amurol-Wrigley would eventually come to understand was something that Rob Nelson felt strongly about all along – Big League Chew was a special formula that wasn’t to be messed with, and you couldn’t graft its success onto a chocolate bar.

So while the experiment failed, it created an oddball bit of spin-off packaging that had become a collector’s holy grail for me, but one I can now place in the “got-it” column.  And that’s pretty neat.

A New York City based writer, editor and sometimes actor. After spending much of the 1990′s in the comic book business helping tell the stories of Marvel Comics’ X-Men as series editor, he has since split his time between developing his own entertainment properties while still consulting and working on others. Having been described as “the Indiana Jones of lost and forgotten candy”, Jason is one of the country’s premier candy collectors and historians with his discoveries appearing in countless blogs, magazines, newspaper articles, and books. Always happy to share his knowledge and unique perspectives on this colorful part of our popular culture, Jason has consulted with New York’s Museum of Food and Drink and has also been a featured guest on Food Network’s Heavyweights, France’s M6 Capital, and New York’s TheActionRoom.com. My Google Profile+
View all posts by Jason Liebig →
This entry was posted in 1980's, Chocolate and tagged 1980's, 80's, Amurol, Big League Chew, bubble gum, candy, collectible, collection, confeciton, confectionery, mascot, packaging, rare, retro, sweets, vintage, Wrigley. Bookmark the permalink.