Collecting candy is a crazy kind of hobby.  Sometimes you can spend years hunting for any trace of a brand or piece of packaging, and never find one.  But it’s not always so tough – typically there is a photo or a mention somewhere.   With Willy Wonka’s Daredevils, there was no such thing – until last week, this was one of what I call a Sasquatch of candy boxes.  Before today, the only evidence you could find of these were the vague recollections and distant memories of those who witnessed them 30 years ago.

So it is that I can state with some confidence that the title image for today’s piece represents the first the internet has seen of this hot cinnamon Gobstoppers cousin – well, aside from a sticker – but I’ll get to that.

Released in 1982 by the newly-named Willy Wonka Brands division of Sunmark (formerly Breaker Confections) – Daredevils were very simply, a hot variety of Gobstopper.  Rather than having multiple rings of flavors like their Gobstopper cousins, Daredevils had rings of hot, interspersed with rings of cool.  A pretty great idea and I remember loving these.

Because they were a childhood favorite, when I started collecting, I sought Daredevils out.  At first, I didn’t even remember exactly what they were called, but then I happened upon a sticker sheet in an eBay lot of 1970’s and 1980’s premium stickers.  This sheet of stickers was originally  part of the Willy Wonka Fun Club Kit from the mid-1980’s, and it turned out to be my first collecting modern encounter with Willy Wonka’s Daredevils mascot: 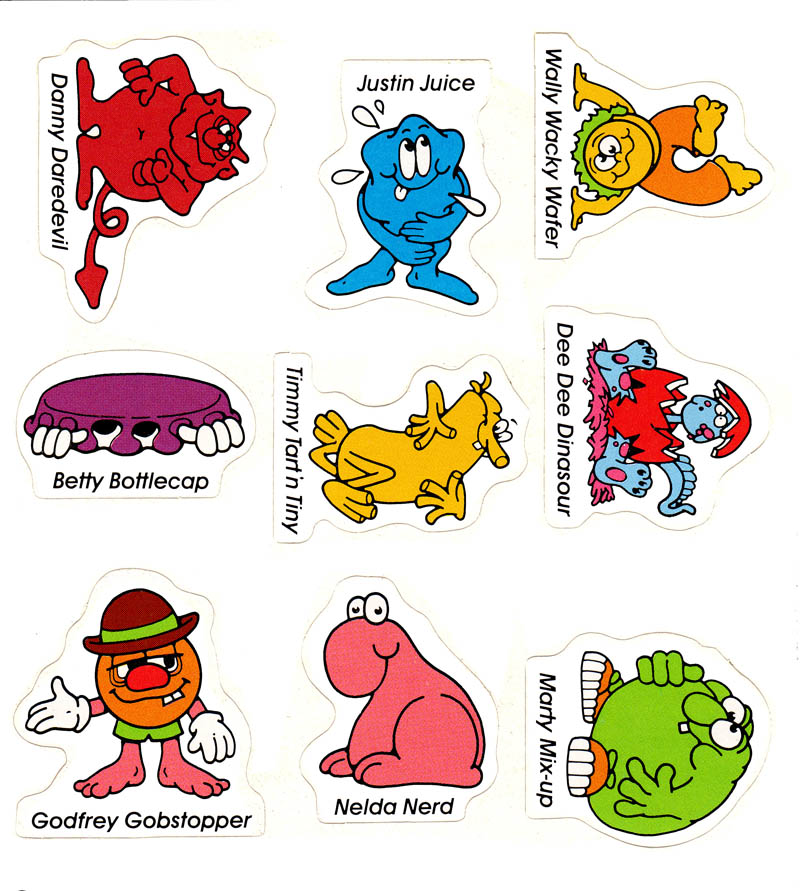 Clipped from the side-panel of a 1985 Count Chocula cereal box, here’s a breakdown of what the entire Willy Wonka Fun Club kit consisted of (I’d love to find a complete one of these kits): 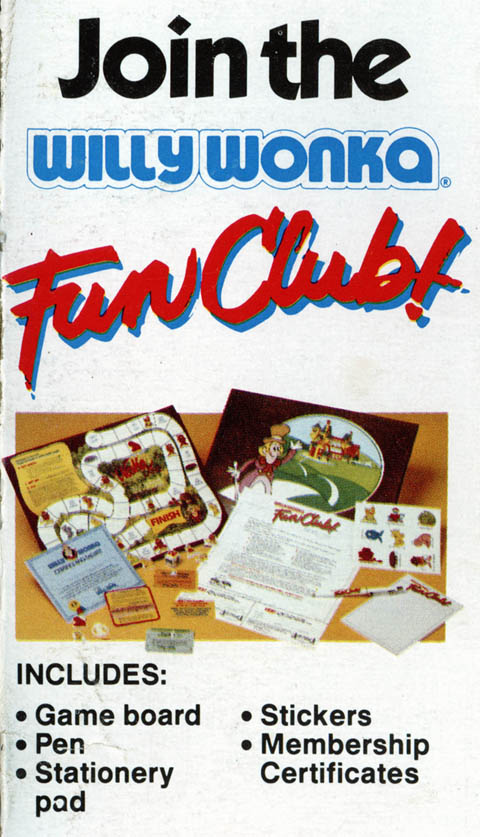 That sticker sheet is remarkable in that it provides names to Wonka mascots I’ve rarely, and in some cases, never seen used anywhere else.  Even the Daredevil got a name. 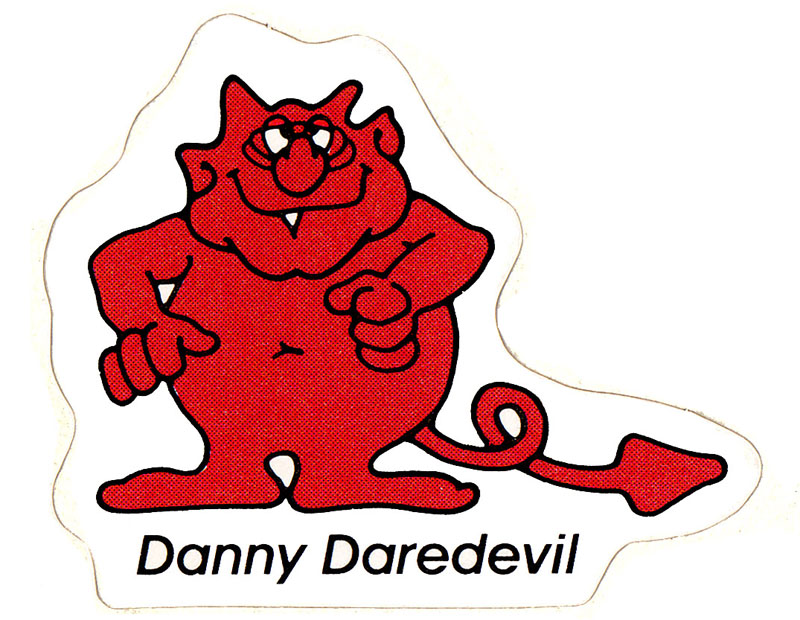 I found that sticker sheet just over five years ago, and ever since, I’ve asked every collector I encountered if they had a Daredevils box, or had ever seen one.  The answer was always no.  But that all changed last week, and I am thrilled to report that a Daredevils box has found its way into my collection.  So here it is, Internet – a tasty piece of 1980’s candy nostalgia you’ve never seen before: 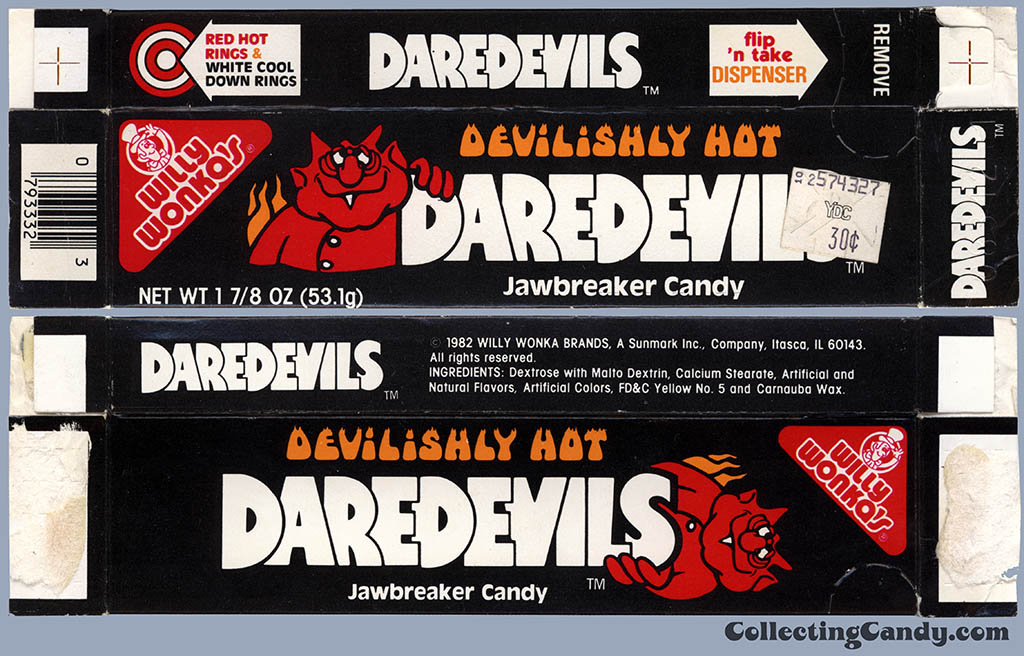 A striking box with its black backround and graphic white logo.  The logo features a style that is purposely reminiscent of Wonka’s main jawbreaker product logo of the time – Gobstoppers:

As with any great collector-hunt, finding a piece like this is thrilling.  But this thrill is even more profound as this Daredevils discovery is part of a much larger find:  I have taken on the curation of another collector’s large confectionery preservation achievement – The L.M. Kallok Collection.  I’ll be writing and sharing more about this wondrous collection in the coming months, both here and on my Flickr pages.  So stay tuned – it’s going to be a lot of fun.

A New York City based writer, editor and sometimes actor. After spending much of the 1990′s in the comic book business helping tell the stories of Marvel Comics’ X-Men as series editor, he has since split his time between developing his own entertainment properties while still consulting and working on others. Having been described as “the Indiana Jones of lost and forgotten candy”, Jason is one of the country’s premier candy collectors and historians with his discoveries appearing in countless blogs, magazines, newspaper articles, and books. Always happy to share his knowledge and unique perspectives on this colorful part of our popular culture, Jason has consulted with New York’s Museum of Food and Drink and has also been a featured guest on Food Network’s Heavyweights, France’s M6 Capital, and New York’s TheActionRoom.com. My Google Profile+
View all posts by Jason Liebig →
This entry was posted in 1980's, Boxed, Hard Candy, Nestle, Wonka and tagged 1980's, 80's, Breaker, candy, cinnamon, collecting, collection, confection, confectionery, Daredevils, devil, Gobstopper, jawbreaker, mascot, packaging, retro, sweets, vintage, Willy Wonka, Wonka. Bookmark the permalink.

14 Responses to After years of hunting – Willy Wonka’s Daredevils – Discovered!