Star Wars pendants! In 1979 Nestle wrappers had The Force.

Back in 1979, Star Wars-mania was in full-effect and everyone was excited about the sequel they knew was on the horizon.  I was ten-years-old, and I was certainly a part of that very enthusiastic group of fans whose eyes lit up at the mention of anything related to those characters.

One of the few things I do recall not being overly crazy about though, was the Star Wars-inspired jewelry.  It’s also one of those things that, over the years, I’ve come to appreciate in a different way.   Now, I think they’re kinda cool. 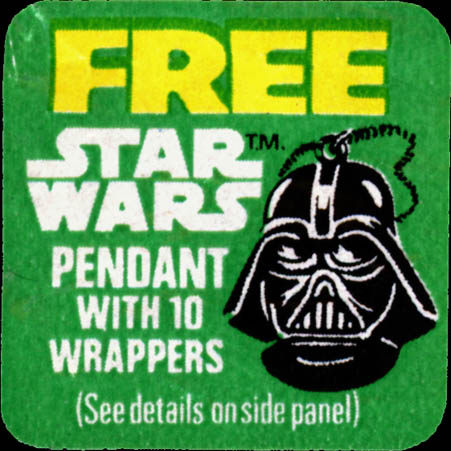 Nestle got in on the Star Wars act, with a 1979 promotion that allowed consumers to save up wrappers for a mail-away offer – giving them a Star Wars pendant in exchange.

This is a mail-away offer I do recall, but due to my being far more interested in mailing away for my non-rocket-firing Boba Fett action figure, I passed on the offer.  Not on the candy – I had my share of Nestle Crunch and Choco’lites back then.

Presented today are three of the wrappers from this promotion.  The offer was also found on $100,000 bar wrappers, but I do not have that one in my collection. 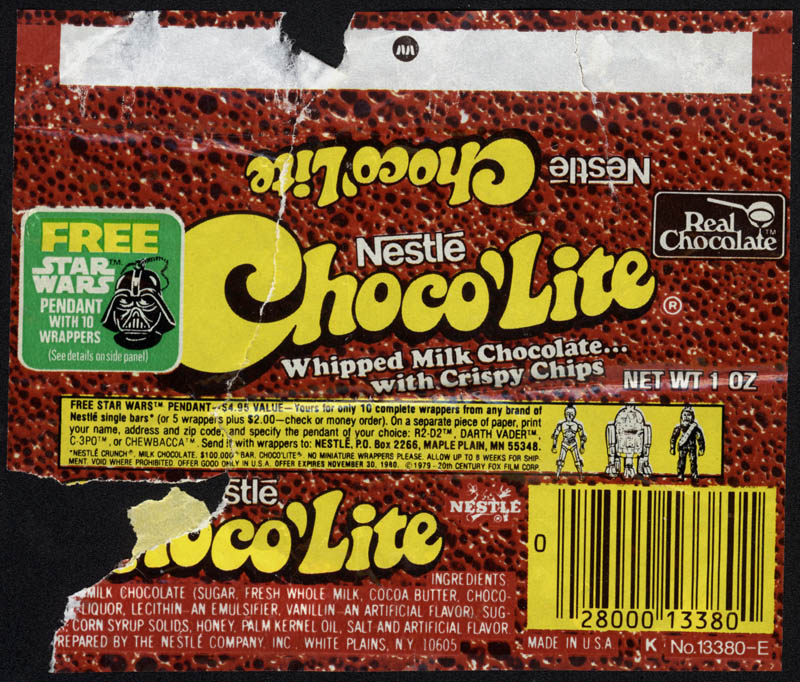 Visiting Gus Lopez’s amazing Star Wars archive database, I turned up a wonderful photo of the mailing envelope along with the pendants, that was shipped out for this promo:

Finally, here’s a parting shot of these pieces, removed from their chains.  This image comes from RebelScum Star Wars forums:

That’s all for this one today.  Drop back by tomorrow as I’ll showing off an early 80’s candy box that I’ve been looking for, for five years.  It’s the first image of this one to ever hit the internet, and it’s a cool one.  It’s going to be devilishly good.

A New York City based writer, editor and sometimes actor. After spending much of the 1990′s in the comic book business helping tell the stories of Marvel Comics’ X-Men as series editor, he has since split his time between developing his own entertainment properties while still consulting and working on others. Having been described as “the Indiana Jones of lost and forgotten candy”, Jason is one of the country’s premier candy collectors and historians with his discoveries appearing in countless blogs, magazines, newspaper articles, and books. Always happy to share his knowledge and unique perspectives on this colorful part of our popular culture, Jason has consulted with New York’s Museum of Food and Drink and has also been a featured guest on Food Network’s Heavyweights, France’s M6 Capital, and New York’s TheActionRoom.com. My Google Profile+
View all posts by Jason Liebig →
This entry was posted in 1970's, Chocolate, Nestle and tagged 1970's, 70's, C3PO, candy, chocolate, collectible, collecting, confection, Darth Vadar, Droids, Nestle, packaging, R2D2, retro, Star Wars, sweets, vintage, wrapper. Bookmark the permalink.

3 Responses to Star Wars pendants! In 1979 Nestle wrappers had The Force.