Pop Bottle Candy – a Topps classic from my Woolworth’s youth.

Since I launched CollectingCandy.com, there are a few topics that I’ve been especially excited to talk about and share pieces of – and Pop Bottle Candy is definitely one of them.

I don’t recall exactly what it was about Pop Bottle Candy, but in 1979-1980, whenever my brother and I visited our local Woolworth’s store, I had to have one.  For those that never experienced them, this was basically a flattened bottle shape of hard candy, similar to the candy that makes up a clear Topps Ring Pop.  It was good, and it lasted a long time.

Now decades later, my passionate collector nature has me hunting for whatever evidence of these I can find. 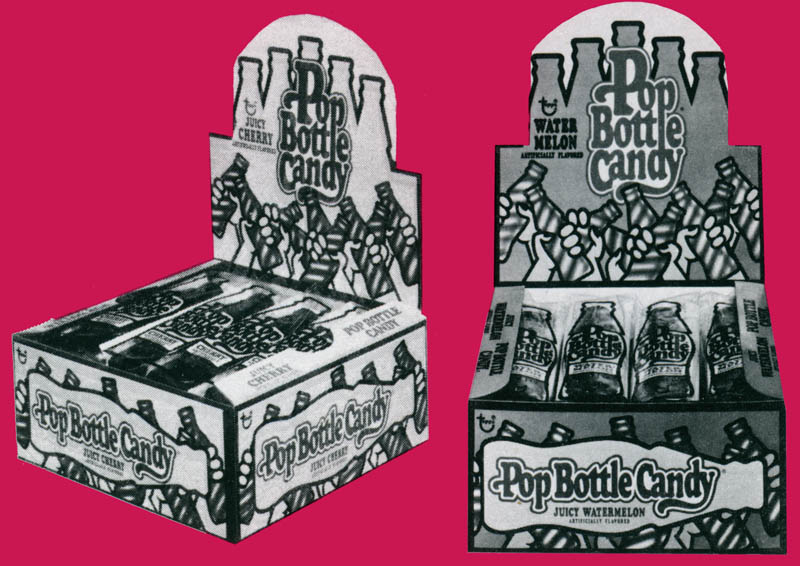 The first pieces that I found with references to Pop Bottle Candy were on Topps trading card wrappers – one of the more common pieces you’ll see that reference the confection. 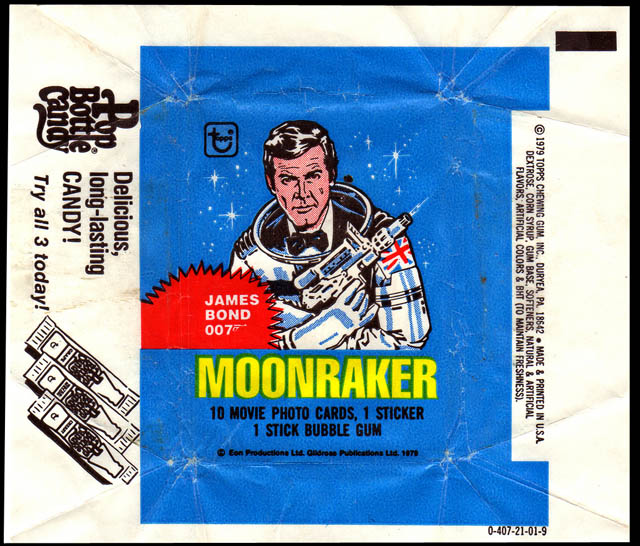 Also in Topps’ Alien non-sport gum card set, they had ads for Pop Bottle Candy on the backs of some of the stickers.  Here’s one of them: 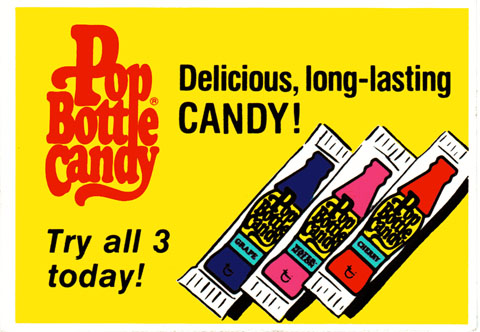 I didn’t know if I’d ever find an actual vintage Pop Bottle Candy package, and when I did,  it surprised me a bit. 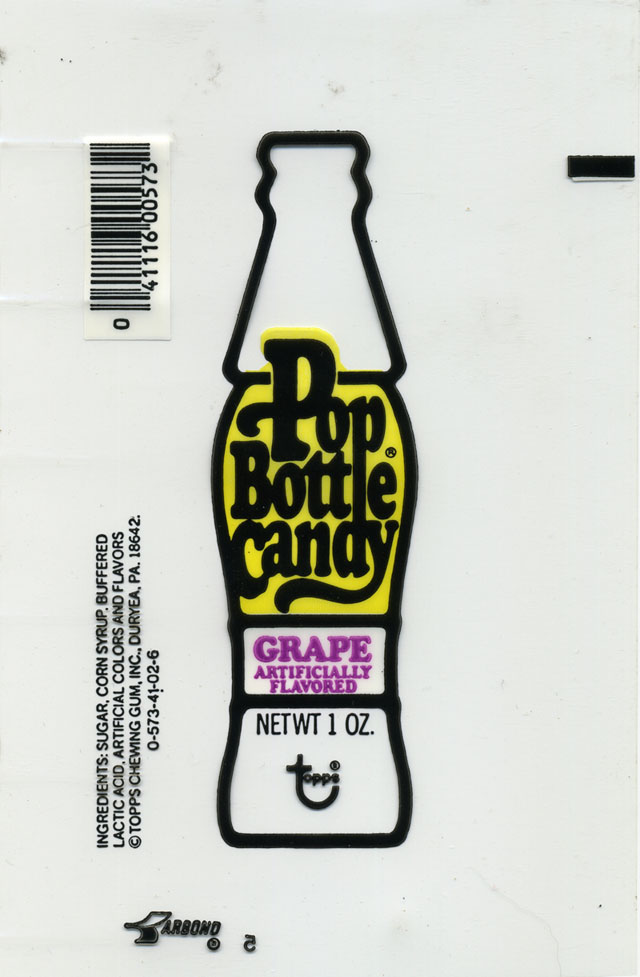 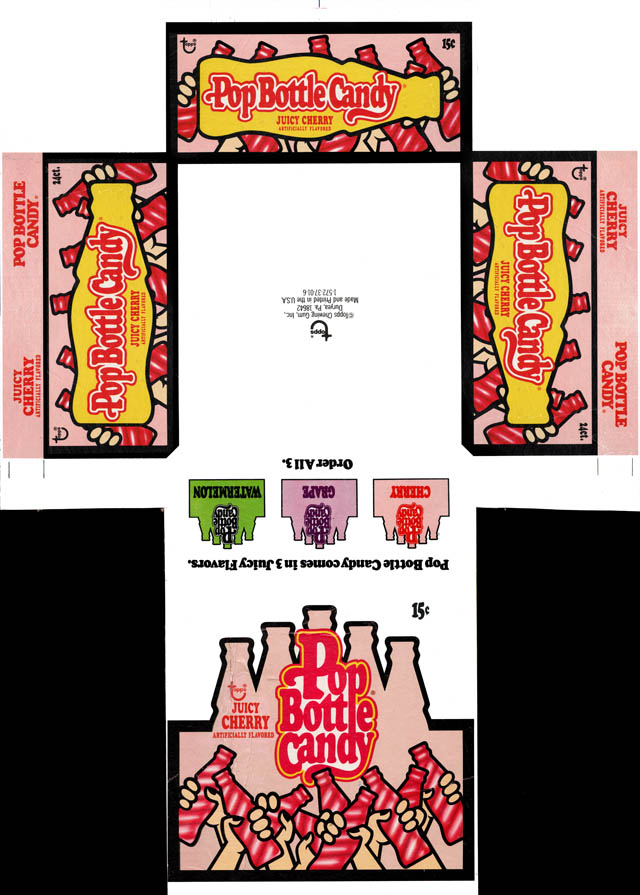 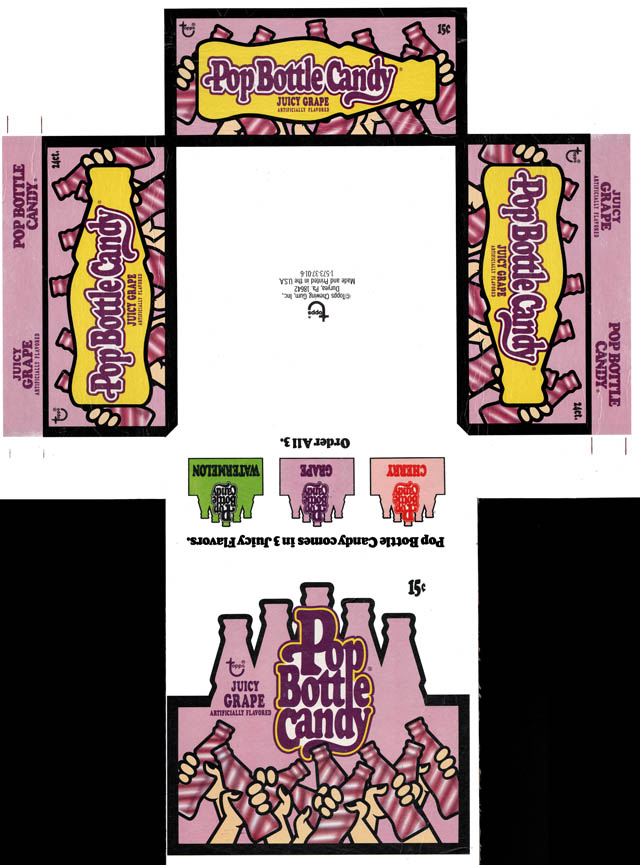 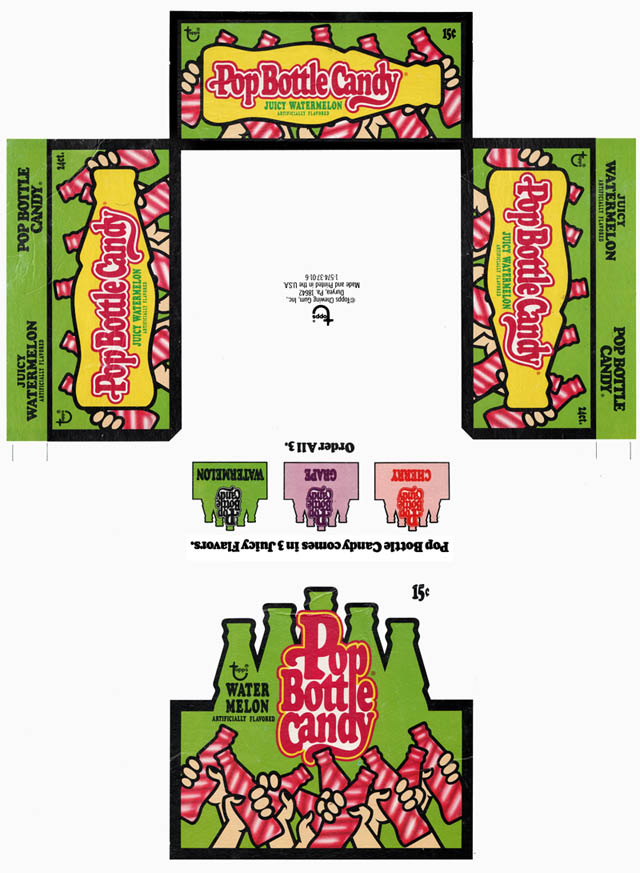 But even with all of those pieces, I wasn’t ready to do a write-up on this, because I didn’t have a quality image of what the candy really looked like.  But that changed this weekend when a collector pal of mine dug up an old Topps promotional sheet for them.  Here’s a clip from it, showcasing a rack of Pop Bottle Candy, in all their glory. 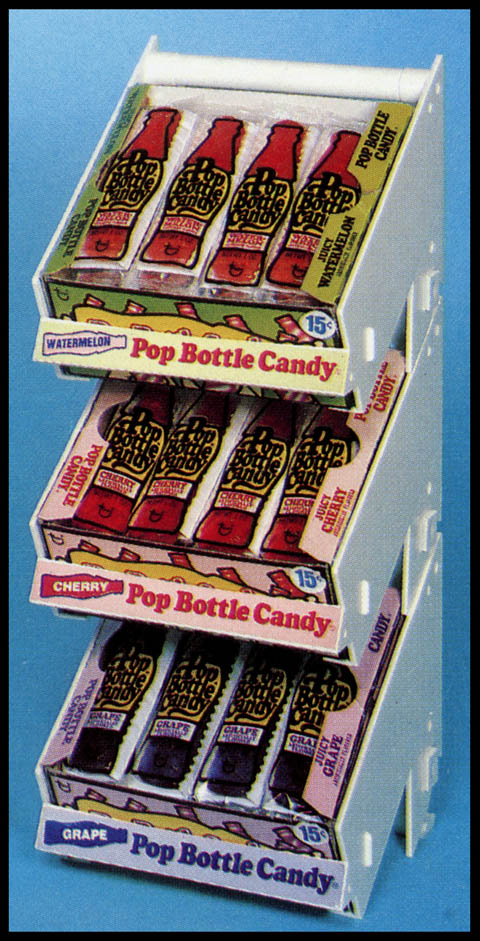 That great shot comes courtesy of the dynamite sales sheet below.  Not only does it lay out how great the candy is, but it also tells a little about the Saturday Morning Cartoon that would soon be running to support Pop Bottle Candy’s release: 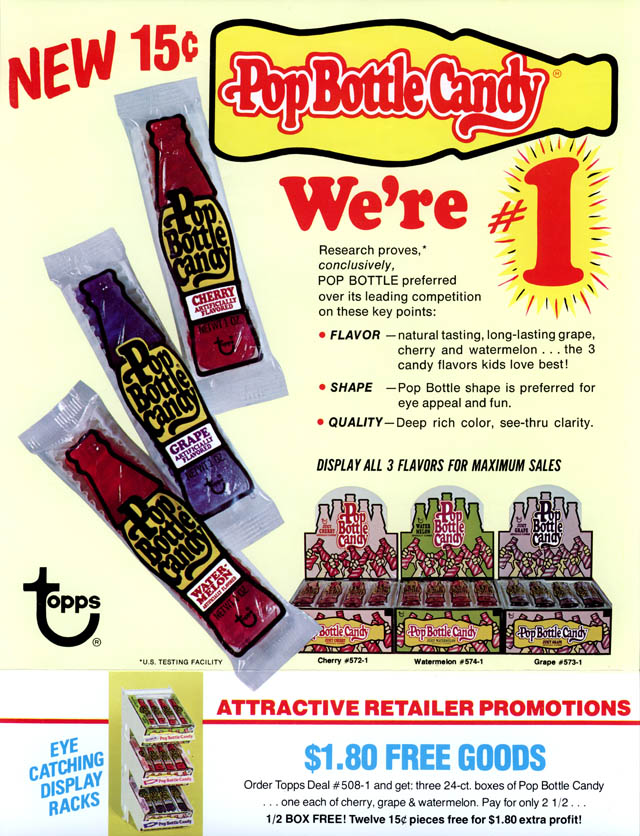 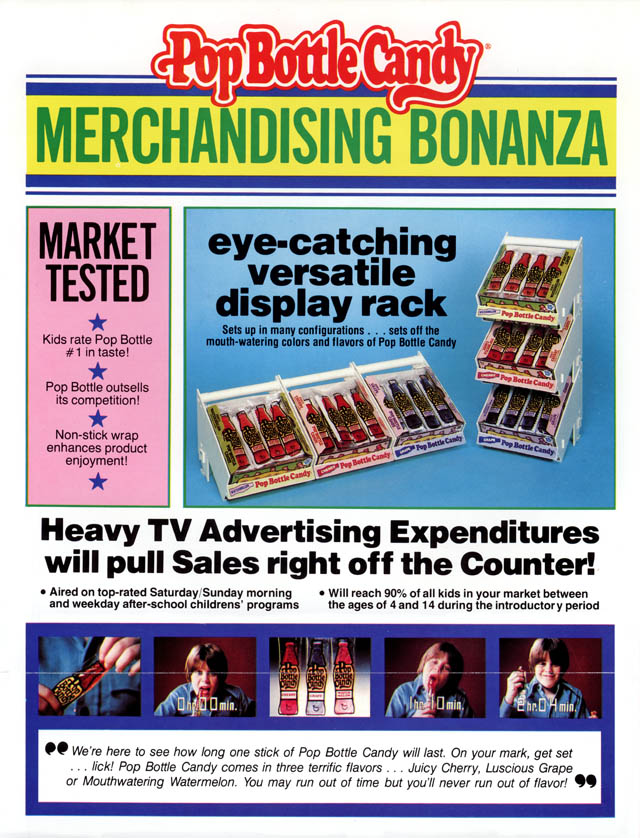 And that’s all for Pop Bottle Candy.  This piece is going up much later than my normal daily post, as I was busy with collector-related tasks all-day long.  Good ones, too.   I’ll share a snippet of that tomorrow.

And heck, there’s even something from today’s work I was doing, that I can add for today’s article.  So here it is, a store-bought Pop Bottle Caps pack (scanned in front of a white as well as a black background – can never figure which I like best for pieces like this): 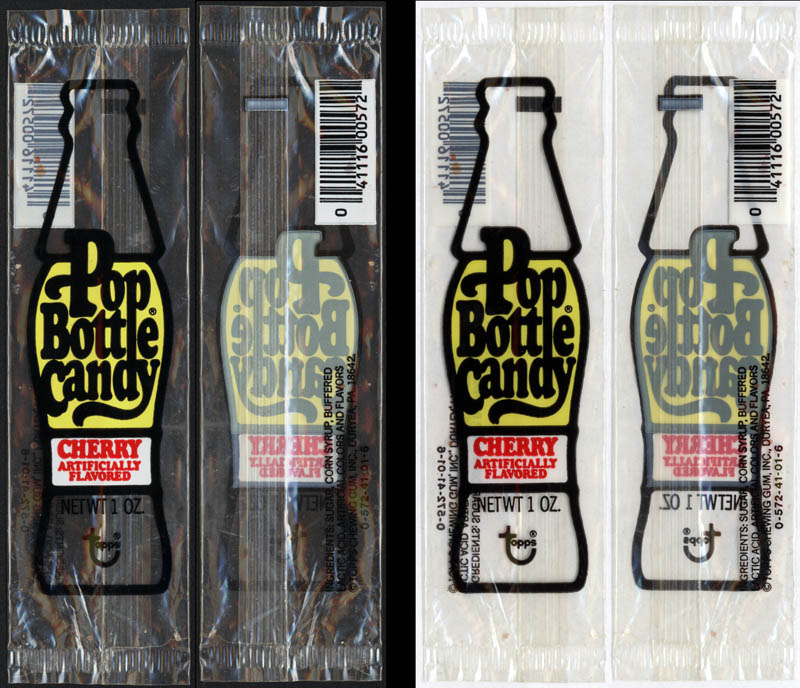 A New York City based writer, editor and sometimes actor. After spending much of the 1990′s in the comic book business helping tell the stories of Marvel Comics’ X-Men as series editor, he has since split his time between developing his own entertainment properties while still consulting and working on others. Having been described as “the Indiana Jones of lost and forgotten candy”, Jason is one of the country’s premier candy collectors and historians with his discoveries appearing in countless blogs, magazines, newspaper articles, and books. Always happy to share his knowledge and unique perspectives on this colorful part of our popular culture, Jason has consulted with New York’s Museum of Food and Drink and has also been a featured guest on Food Network’s Heavyweights, France’s M6 Capital, and New York’s TheActionRoom.com. My Google Profile+
View all posts by Jason Liebig →
This entry was posted in 1970's, 1980's, Hard Candy, Novelty, Topps and tagged 1970's, 1980's, 70's, 80's, candy, collectible, collecting, collection, confection, confectionery, novelty, old, packaging, retro, sweets, vintage, wrapper. Bookmark the permalink.

3 Responses to Pop Bottle Candy – a Topps classic from my Woolworth’s youth.