A favorite from the archives – Cadbury’s Amazin’ Raisin Bar. 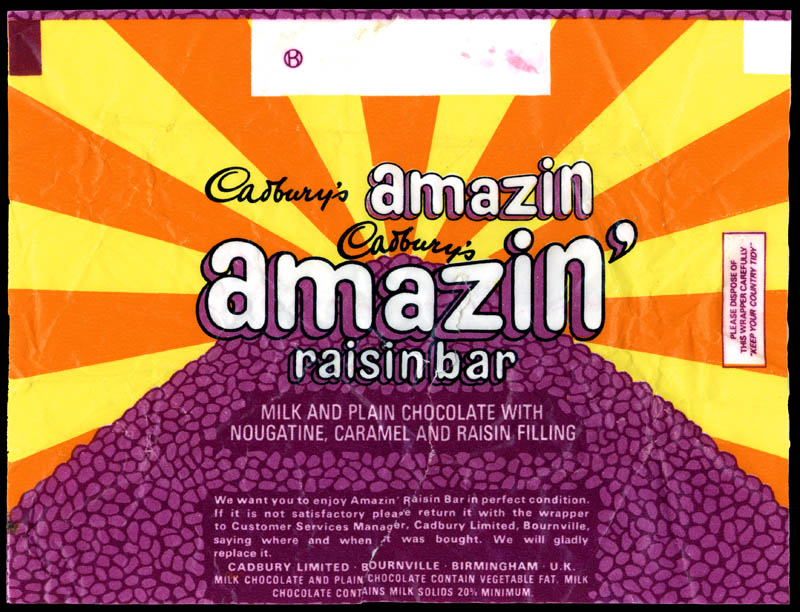 It’s a short post today, as I’m dedicating most of my time this weekend to reorganizing my unfiled wrappers and boxes.  Since launching last month, I’ve been reminded of the areas of my archive that need some administrative attention.  With that in mind, today is all about a beautiful wrapper from the UK – the Amazin’ Raisin.

I first became aware of the Amazin’ Raisin, and most UK wrappers in general, through Robert Opie’s book on UK culture, The 1970’s Scrapbook [See link below].  Opie is a notable historian of British pop culture, music, and packaging.  There’s even a Museum of Brands, Packaging & Advertising, that houses his packaging archives, located in London.   Unfortunately I didn’t find out about the museum until I had already left Southern England last November.

This is a shot of the Amazin’ Raisin Bar wrapper, as it appears in Opie’s book.  This is the first I had seen of one:

I am not a fan of raisins, and growing up in the United States I’d never sampled an Amazin’ Raisin Bar, but when I saw that image – it’s a wrapper I wanted to have.

The particular wrapper shown in Opie’s book appears to pre-date the one I have in my collection.  The differences are the 5p printed-on price and the slogan above the Cadbury’s logo on Opie’s image which states, “It’s amazin’ what raisins can do!”

I’ve never seen any significantly redesigned version of the Amazin’ Raisin wrapper, so my guess is that this was around for a few years in the 70’s, and then discontinued.

That’s all for today’s post, and selection of a favorite from my archives.  Back to sorting and filing for me — see you back here tomorrow.

A New York City based writer, editor and sometimes actor. After spending much of the 1990′s in the comic book business helping tell the stories of Marvel Comics’ X-Men as series editor, he has since split his time between developing his own entertainment properties while still consulting and working on others. Having been described as “the Indiana Jones of lost and forgotten candy”, Jason is one of the country’s premier candy collectors and historians with his discoveries appearing in countless blogs, magazines, newspaper articles, and books. Always happy to share his knowledge and unique perspectives on this colorful part of our popular culture, Jason has consulted with New York’s Museum of Food and Drink and has also been a featured guest on Food Network’s Heavyweights, France’s M6 Capital, and New York’s TheActionRoom.com. My Google Profile+
View all posts by Jason Liebig →
This entry was posted in 1970's, British and tagged 1970's, 70's, antique, Britain, British, Cadbury, candy, chocolate, collectible, collecting, confection, confectionery, hobby, old, packaging, retro, sweets, UK, United Kingdom, vintage, wrapper. Bookmark the permalink.

2 Responses to A favorite from the archives – Cadbury’s Amazin’ Raisin Bar.