I’m not sure about everyone else, but when I was a kid it was always fun playing with pretend money.  Be it Monopoly or play money or the occasional odd foreign coin that would find their way into my hands, I was good for all of it.  Even when it was presented to me as an edible treat.   Before you would eat it, it was a secret treasure.

While commonly encountered as foil-covered chocolate coins, the concept of candy served up in a form appealing to the numismatist (a coin collector) is a recurring theme even in non-chocolate candy.   The Topps company produced at least two novelty candy coin offerings that I’ve come across, and today I’ll be covering my favorite of them:  Lotsa Loot.

Sold in the early-to-mid 1970’s, Lotsa Loot likely competed with products such as Sweettarts and Bottle Caps.  Featuring similar packaging, the candy also approximated the look and size of those other confections, while offering a standard array of flavors.

After looking for a Lotsa Loot pack for quite some time, I was thrilled when I recently added this sealed example to my collection. 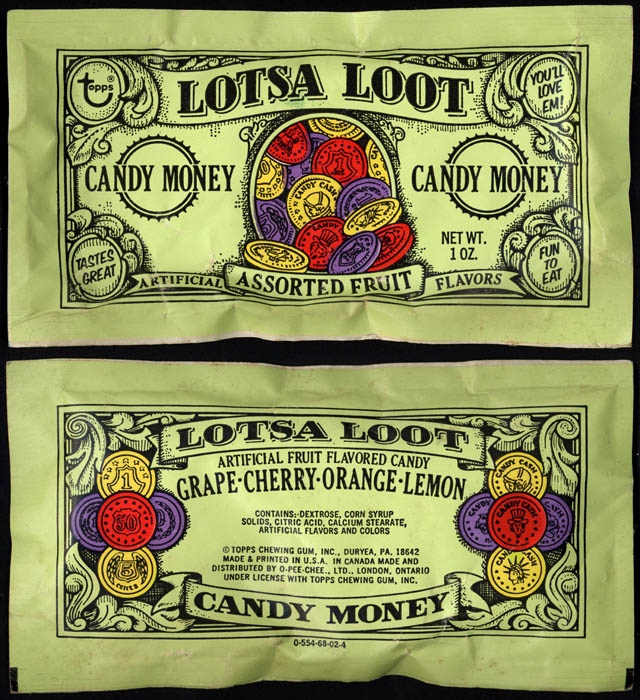 As to the dates on this one, I can only make an educated guess.  Lacking any UPC on the package would typically indicate that this pack dates to the earlier 70’s, but that is not a hard rule.  UPC’s first started making their on-product appearances in 1974 but they were not widely adopted until later in the decade.

Beyond this individual pack, I also have a Lotsa Loot 10-cent display box in my files:

I don’t believe that Lotsa Loot saw anything in the way of package revisions or flavor-changes.  I have two additional Lotsa Loot related pieces which both seem to share the design and look already shown:

And that’s everything I’ve got, and in fact everything I’ve ever seen, on Lotsa Loot.  It was a great release from a period in Topps’ history of novelty candy that I’m quite fond of.

One final shot to share:  Here’s one of the only images I’ve come across for Topps’ Candy Pennies.  Sold at the same time as Lotsa Loot, I’ve yet to encounter a package (they were sold in rolls) or a display box:

Drop back in tomorrow for CollectingCandy.com’s weekly Wacky Wednesdays!

A New York City based writer, editor and sometimes actor. After spending much of the 1990′s in the comic book business helping tell the stories of Marvel Comics’ X-Men as series editor, he has since split his time between developing his own entertainment properties while still consulting and working on others. Having been described as “the Indiana Jones of lost and forgotten candy”, Jason is one of the country’s premier candy collectors and historians with his discoveries appearing in countless blogs, magazines, newspaper articles, and books. Always happy to share his knowledge and unique perspectives on this colorful part of our popular culture, Jason has consulted with New York’s Museum of Food and Drink and has also been a featured guest on Food Network’s Heavyweights, France’s M6 Capital, and New York’s TheActionRoom.com. My Google Profile+
View all posts by Jason Liebig →
This entry was posted in 1970's, Hard Candy, Topps and tagged 1970's, 70's, candy, collectible, collecting, collection, confection, design, packaging, retro, sweets, Topps, vintage, wrappers. Bookmark the permalink.