Butterfingers and Bart – Nestle’s Affair with The Simpsons

The Simpsons and the Butterfinger – the connection may not be as obvious as it once was, but during the early days and in fact the first decade of their existence, The Simpsons were inexorably tied to the crispity, crunchety, peanut-buttery treat. 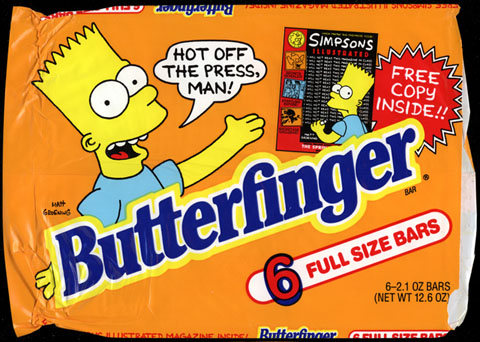 Not only were they tied together, but for those of us who weren’t watching the Tracey Ullman show, the Bart Simpson Butterfinger TV commercials were our first exposure to Matt Groening’s creations.

The first Butterfinger TV commercial was aired on October 1st, 1988, but it wasn’t until a year later that their own dedicated series would launch.  When I initially heard they were getting a show, I didn’t even know they were spinning out of the Ullman show — I assumed that “those characters from the commercial are getting their own show!”  I was wrong, but you get my point.

I’m not entirely sure when the Simpsons started actually showing up on Nestle wrappers, but by 1991 they were definitely there.  There is the 6-pack bar promo, which opened today’s piece.   1991 also saw an on-wrapper promotion featuring Simpsons Horoscopes inside the wrappers. 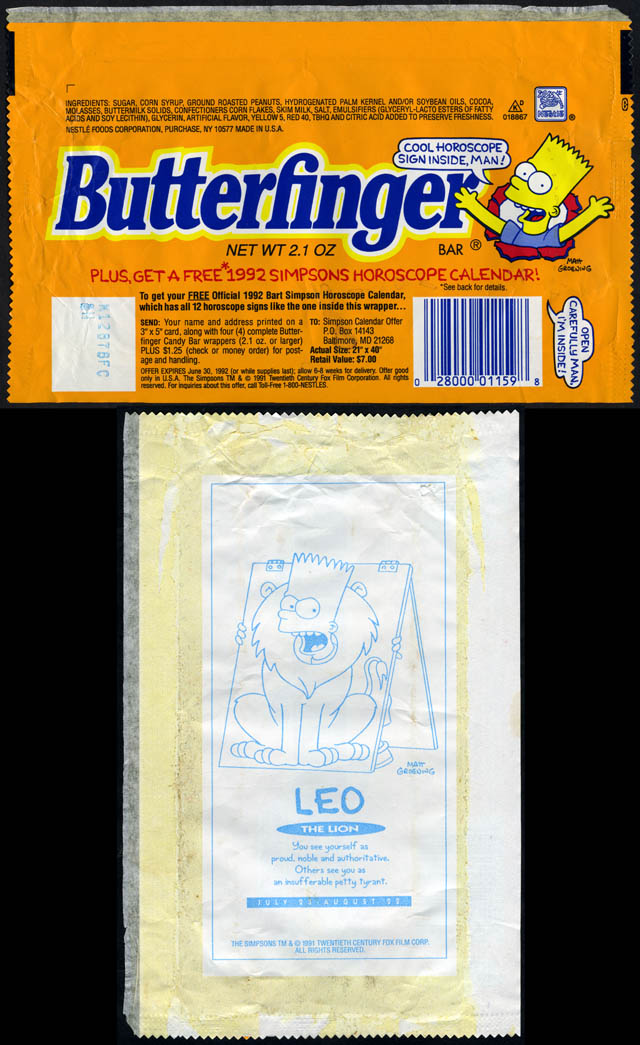 I don’t have a full set of these wrappers – though the outsides are the same, you could build a complete set of the horoscopes – here are the few that I have, cropped and cleaned-up. 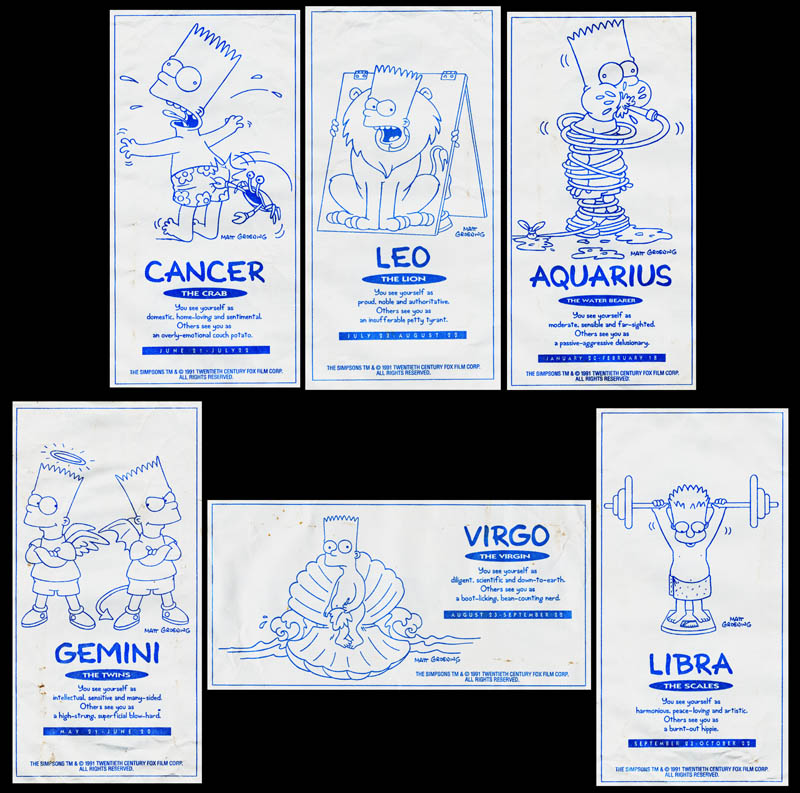 The following year, Nestle would run the Simpsons Summer Games promotions across three of its products: Butterfinger, Baby Ruth, and Raisinets.  Among the prizes offered were actual gold, silver and bronze medals – emblanized with The Simpsons.  Here are examples of the wrappers: 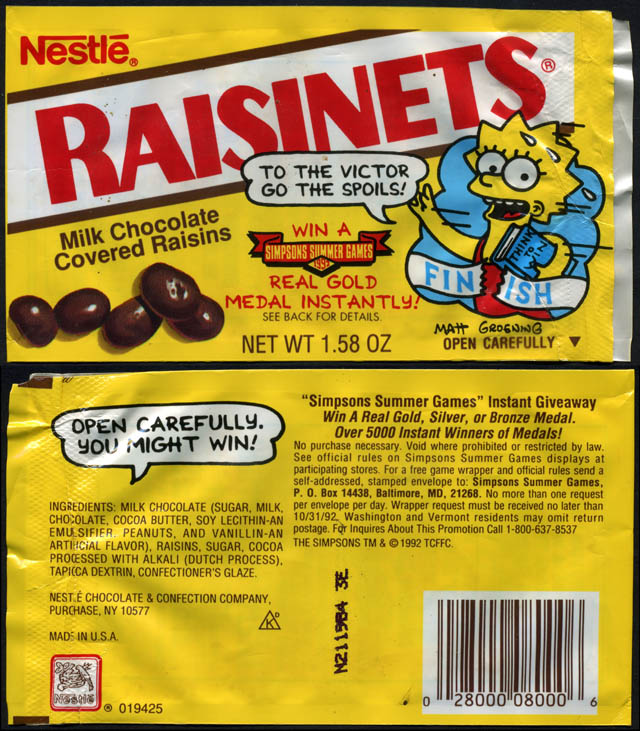 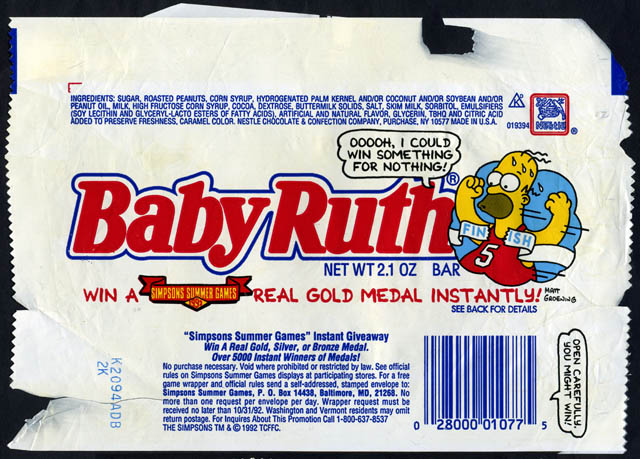 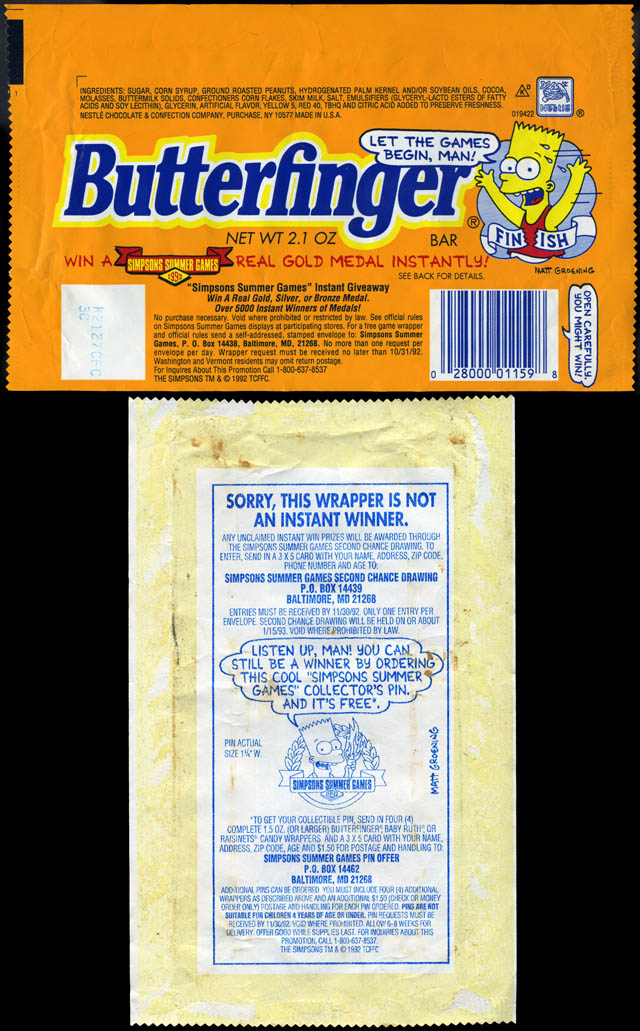 Here is something that’s pretty cool; an image of an actual bronze medal from the Simpsons Summer Games promotion.  This image comes courtesy from the eBay seller who is currently offering it:

I had a little fun with this image, using Photoshop to imagine what all three medals would look like:

In 1993, the promotions took a turn toward a mystery with Bart’s “Who Laid a Finger…”

The next Simpsons wrapper in my collection comes from six years later.  It’s possible that by 1994 the over-saturation of Simpsons was enough to take a break but I can’t be certain of that.  Even so, I am certain that in 1999 there was a new on-pack promotion: 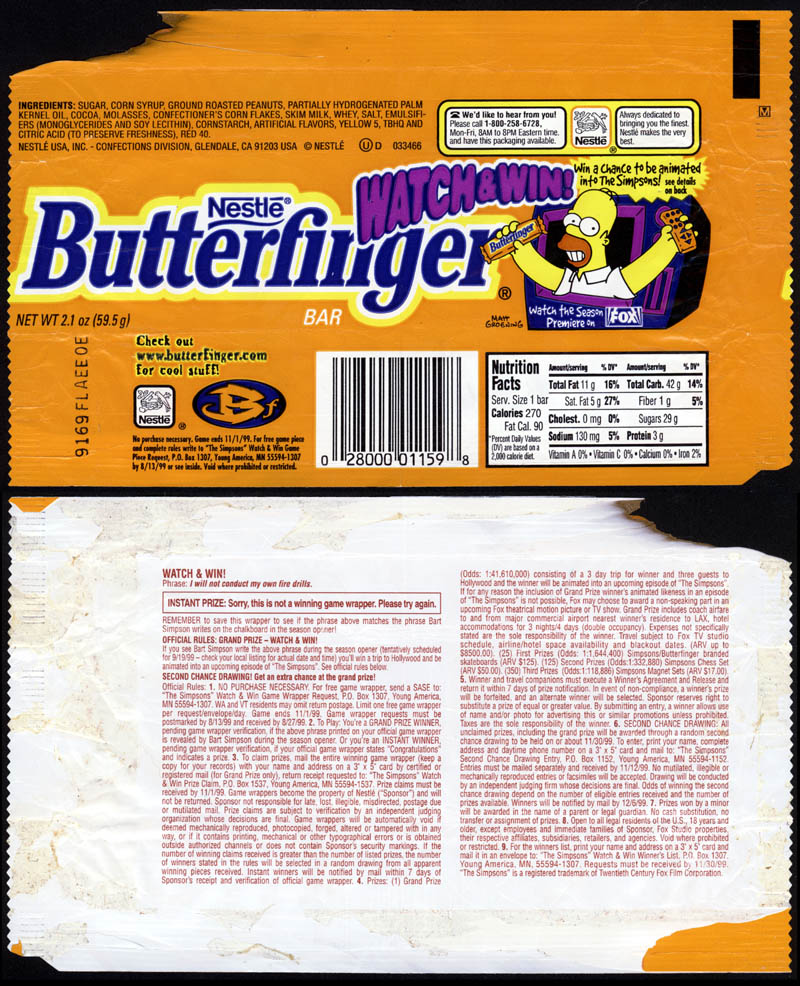 In 1999 and 2000, Butterfinger BB’s sported all manner of Simpsons characters on the packages.  These are the ones I have: 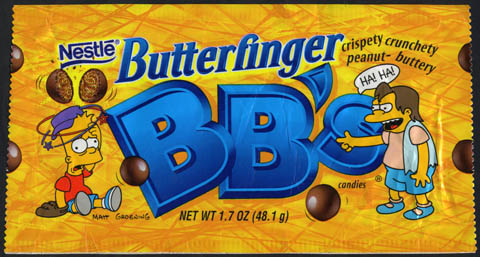 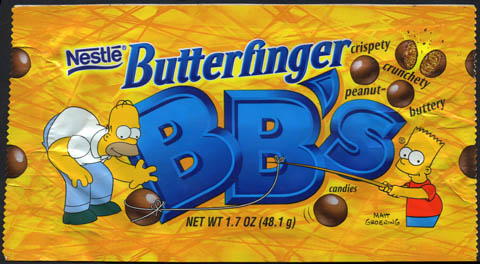 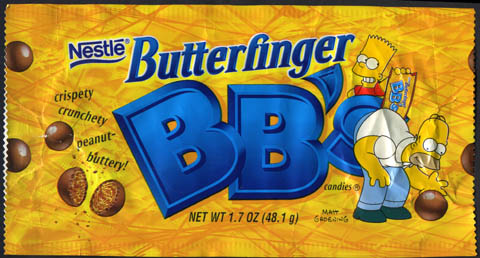 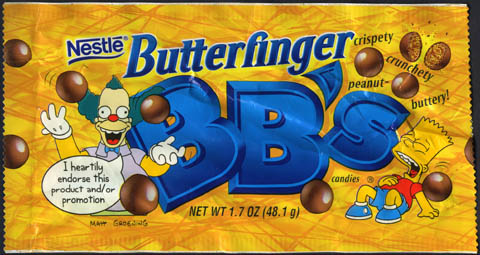 That’s everything I’ve got to show that’s Butterfinger-Simpsons related.  Undoubtedly there was more produced, so I’ll be keeping my eyes peeled, and I’ll be hunting.

Special thanks to the Simpsons-Wiki.  Their website provided some great historical data on the Simpsons Butterfinger commercials.

Closing today with a YouTube clip of what I believe was the very first Simpsons Butterfinger commercial to air, all the way back in 1988:

A New York City based writer, editor and sometimes actor. After spending much of the 1990′s in the comic book business helping tell the stories of Marvel Comics’ X-Men as series editor, he has since split his time between developing his own entertainment properties while still consulting and working on others. Having been described as “the Indiana Jones of lost and forgotten candy”, Jason is one of the country’s premier candy collectors and historians with his discoveries appearing in countless blogs, magazines, newspaper articles, and books. Always happy to share his knowledge and unique perspectives on this colorful part of our popular culture, Jason has consulted with New York’s Museum of Food and Drink and has also been a featured guest on Food Network’s Heavyweights, France’s M6 Capital, and New York’s TheActionRoom.com. My Google Profile+
View all posts by Jason Liebig →
This entry was posted in Chocolate, Peanut Butter and tagged 1990's, antique, Bart Simpson, Butterfinger, candy, chocolate, collectible, collecting, collector, confection, Curtiss, Nestle, old, packaging, retro, Simpsons, sweets, The Simpsons, vintage, wrapper. Bookmark the permalink.