Happy 100th Birthday to Oreo! – Part One: The History

Oreo cookies are not a candy – they’re a cookie.   Even so, I wanted to find a reason to post about this notable anniversary for the brand.  So I searched my files and you know what?  I found that I had a few Oreo branded candy bar wrappers from Japan.  With those as my lead-in; welcome to CollectingCandy.com’s dedication to 100-years of Oreo!

First up, lets take a look at the Japanese Oreo candy bar wrappers I have.  Two of them are from 2009 and the other pair are from early 2010: 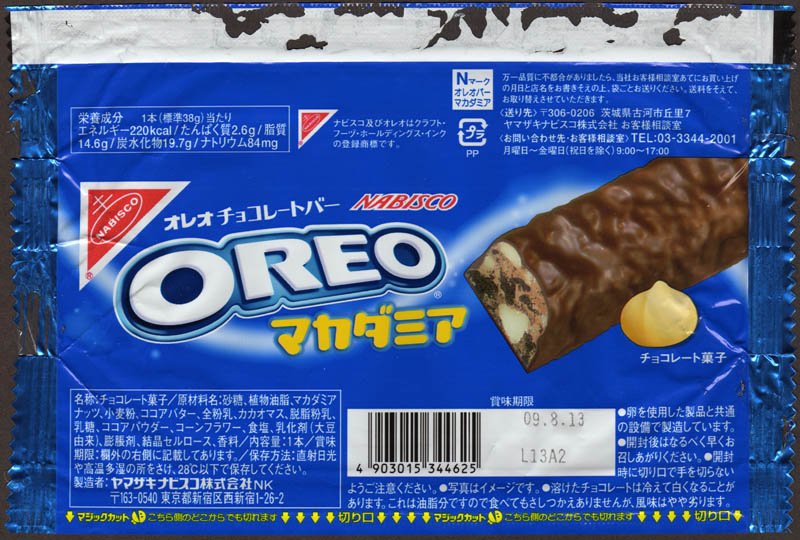 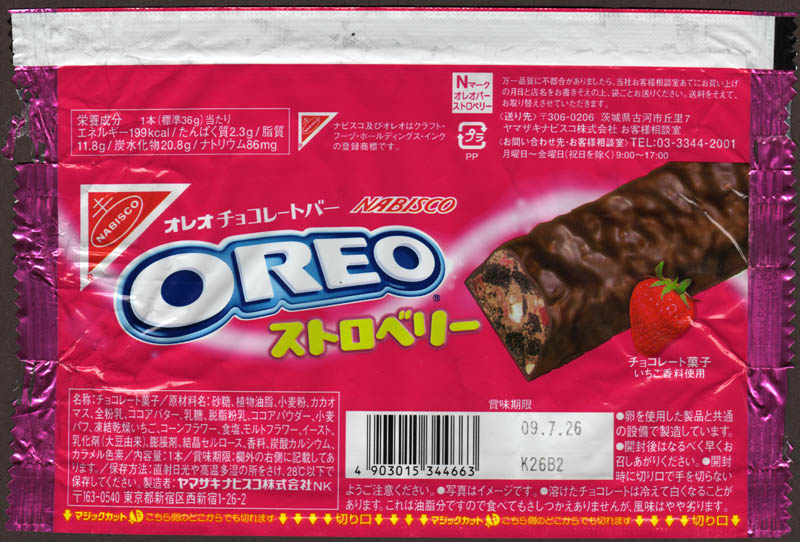 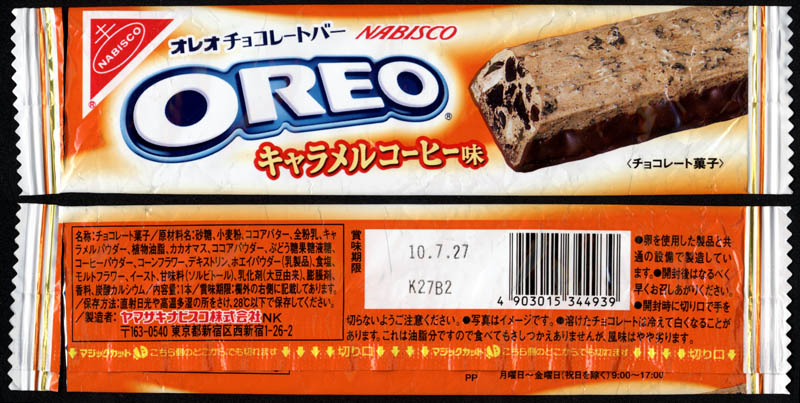 That’s all of the Oreo-branded candy bar wrappers we have to show today.  But it’s Oreo’s 100th birthday, and here at CollectingCandy we want to celebrate that – we also have a great selection of vintage Oreo packages we want to share.

Oreo has been around since 1912, but for the purpose of today’s piece, we’ll be focusing on the last 60 years of Oreo packaging history.

First up is a fragile cello pack for Oreo that was originally saved along with a group of candy wrappers from the 1950’s: 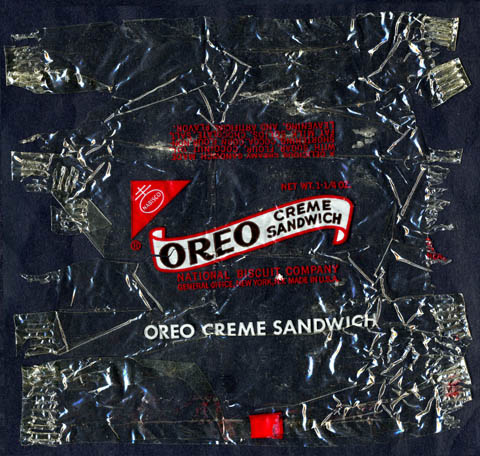 Next up are a pair of images from a Nabisco sales binder from the 1960’s: 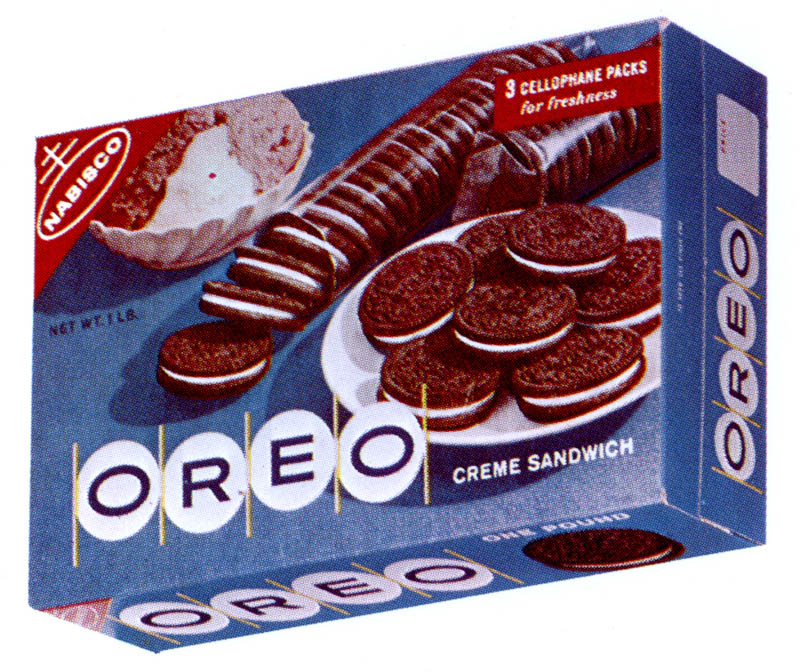 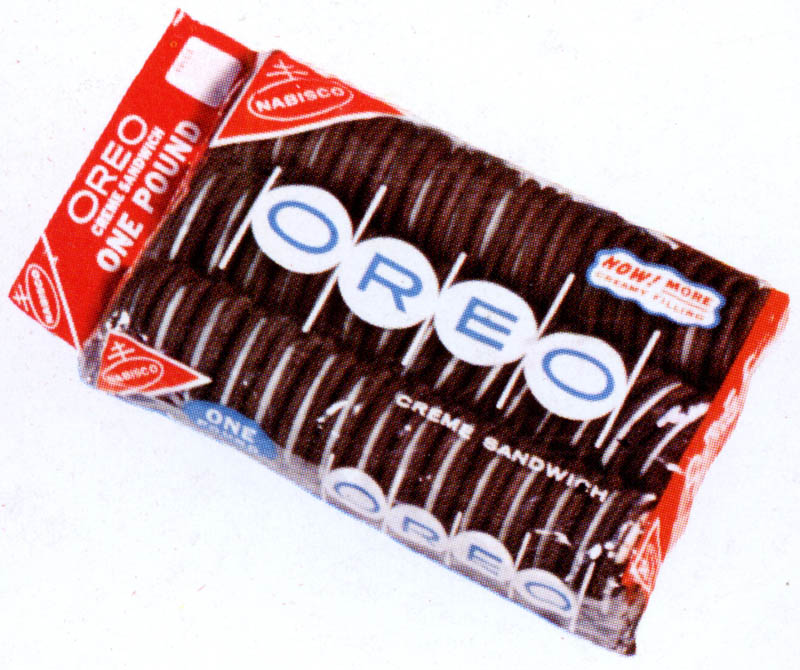 I’m fortunate that, starting with  a 1960’s pack, I have a selection of full size Oreo cello packages.  These are all unused examples, recovered from the plastics factory that manufactured the packaging for Nabisco. 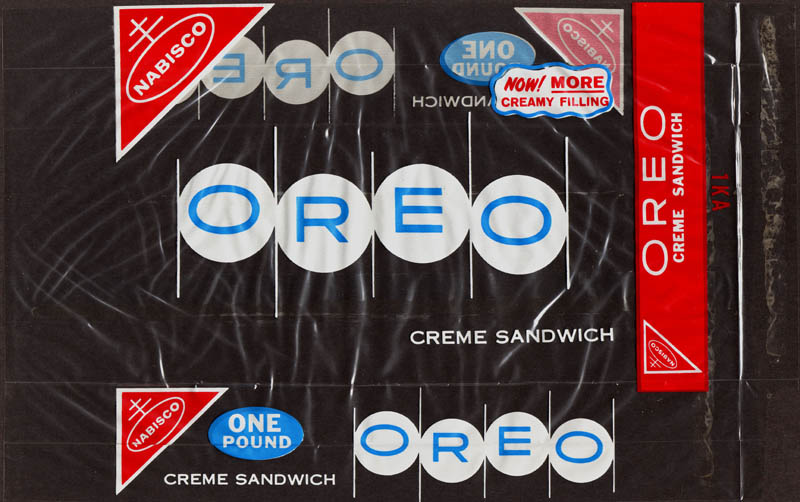 The 1960’s design, which I quite like, gave way to the classic 1970’s Nabisco look, and for a short time, a fun Oreo mascot – The Middleman: 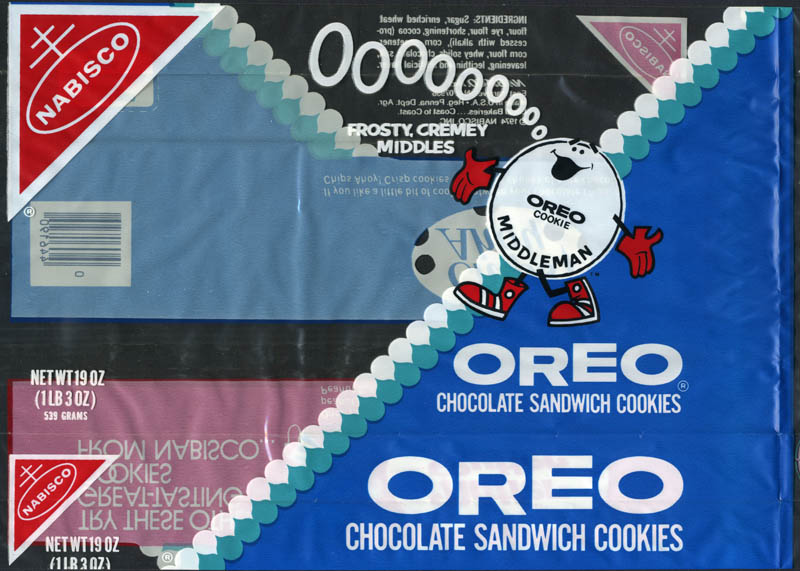 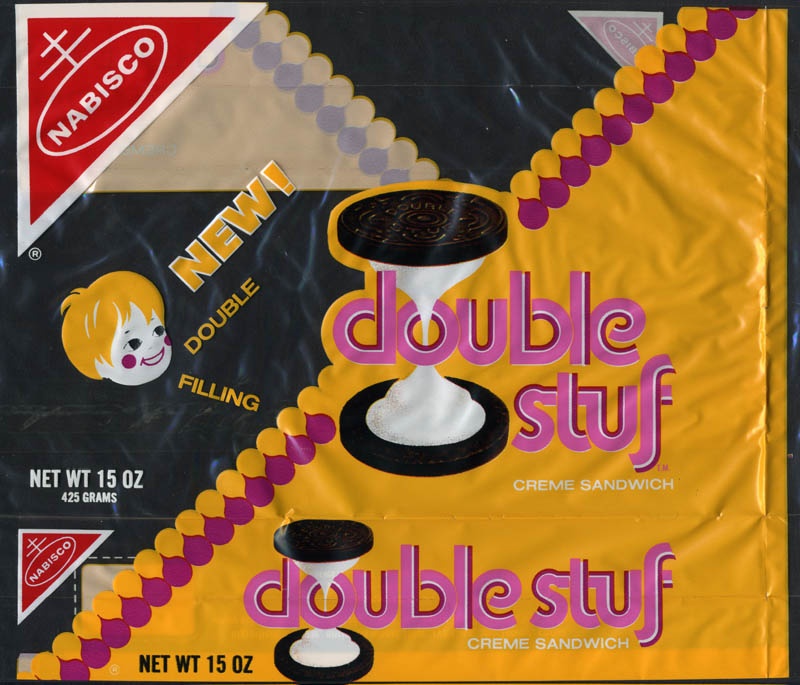 In another year or two, Double Stuf would join the Oreo family proper.

By 1977, Middleman had retired, leaving packaging looking largely as they would for many years to come: 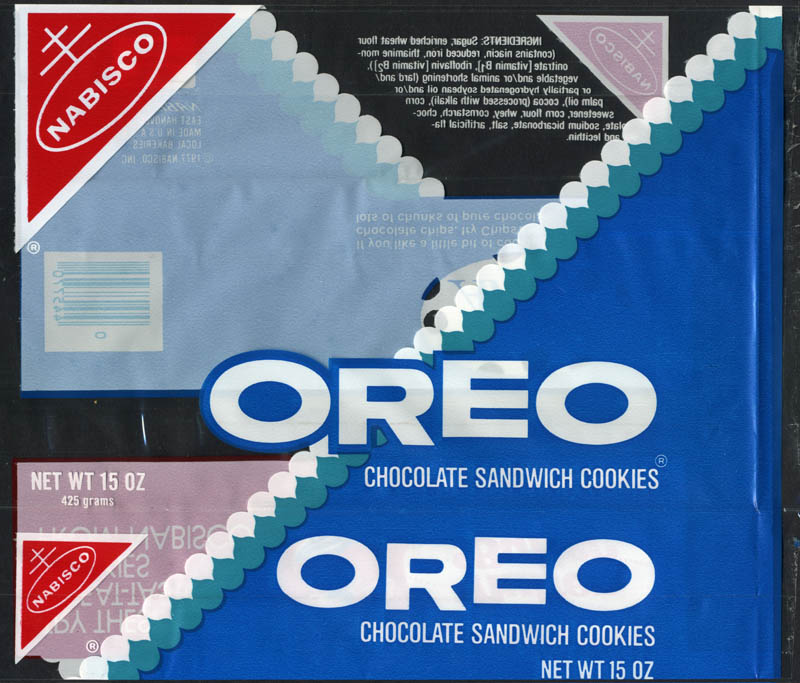 It’s worth noting that Nabisco was a full-fledged candy company by this point in their own history – then overseeing several marquee brands including Sugar Babies and Chuckles, but that’s a tale for another time.

In 1981, Nabisco would launch another pair of Oreo-like cookies, with an ice-cream flavor theme called I Screams:

I Screams didn’t last very long, but they’re fondly remembered by those who had the chance to try them.  Ice-creme themed Oreos have worked their way back onto store shelves, and I’ll be covering a few of those tomorrow.

Moving on into the 1980’s, Oreo packaging retained the design and look it had introduced in the early 1970’s.  Here’s an example of the 1983 packaging, which looks much as the packaging did a decade earlier: 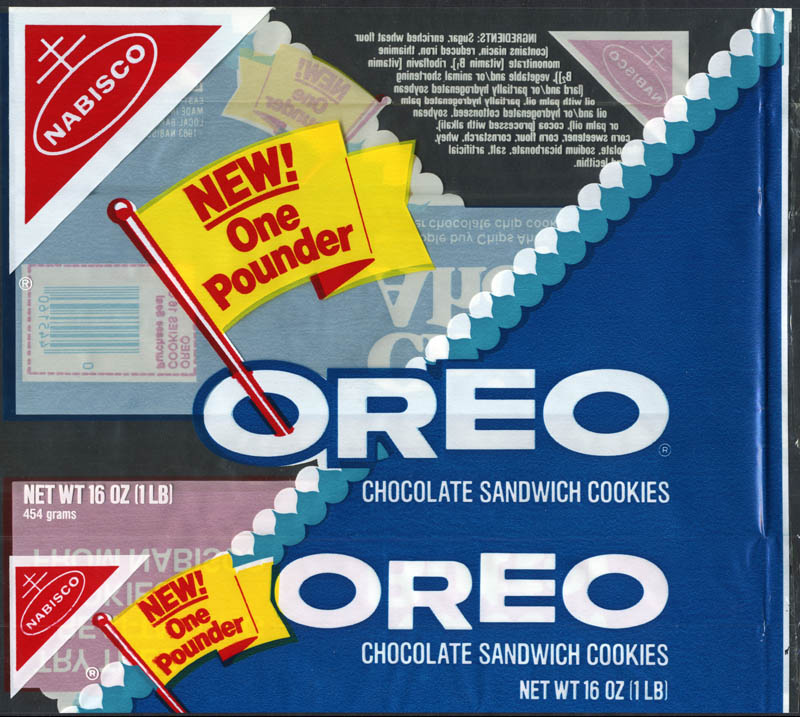 By the early 1990’s, Nabisco had begun to expand the reach of the Oreo brand into other areas.  These might seem obvious now, but at the time it was unusual.  Here’s an Oreo ice cream cone box: 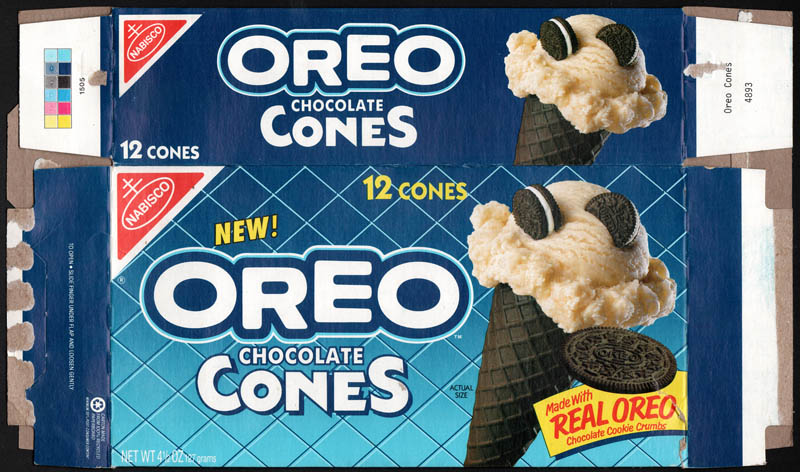 Next up is an Oreo snack packs box from 1995, showing us the look of that era.  The early computer design age is evident on this one: 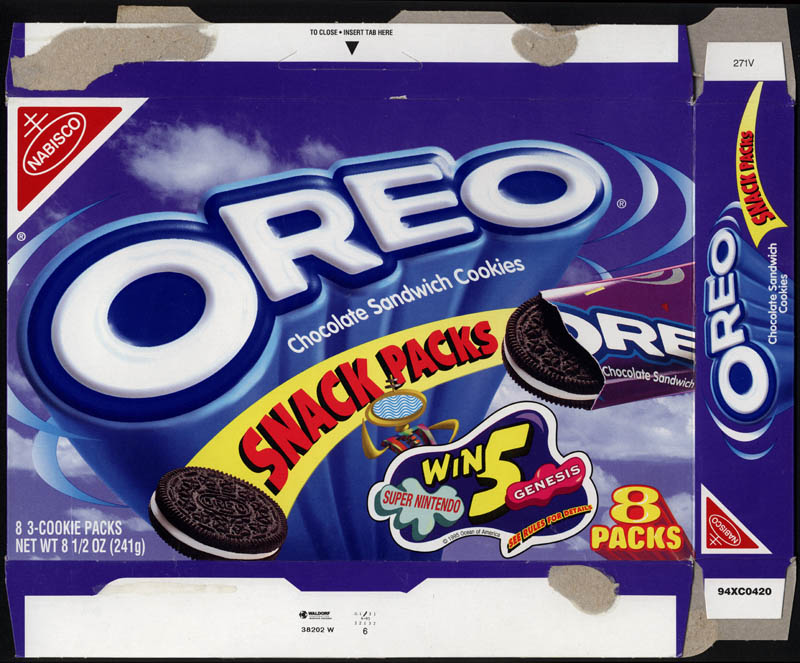 By the later 1990’s, the Oreo brand had begun a significant expansion, but it was the early 2000’s when things really took off.  I’ve been able to determine that 2002 was when the first Uh-Oh! Oreos were sold:

Uh-Oh! Oreo cookies must have struck a nerve with consumers, because soon Nabisco opened the brand up to all manner of variations.  And my how the variations have come.

These days, the variety of Oreo cookies available year-round is half-a-dozen, but when you include seasonal and limited edition flavors, it can balloon to over twenty varieties.

A New York City based writer, editor and sometimes actor. After spending much of the 1990′s in the comic book business helping tell the stories of Marvel Comics’ X-Men as series editor, he has since split his time between developing his own entertainment properties while still consulting and working on others. Having been described as “the Indiana Jones of lost and forgotten candy”, Jason is one of the country’s premier candy collectors and historians with his discoveries appearing in countless blogs, magazines, newspaper articles, and books. Always happy to share his knowledge and unique perspectives on this colorful part of our popular culture, Jason has consulted with New York’s Museum of Food and Drink and has also been a featured guest on Food Network’s Heavyweights, France’s M6 Capital, and New York’s TheActionRoom.com. My Google Profile+
View all posts by Jason Liebig →
This entry was posted in 1970's, 1980's, Chocolate, cookies and tagged 1970's, 1980's, 70's, 80's, anniversary, collectible, cookie, cookies, food, junk, junk food, Nabisco, Oreo, packaging, vintage. Bookmark the permalink.

6 Responses to Happy 100th Birthday to Oreo! – Part One: The History