From the Mystery Files: Ringers – The Adult Bubble Gum.

I’ve previously pointed out that the history of candy and gum packaging is largely unknown.  It’s a bit like a fossil record in that for every piece you’ve seen, there are likely ten more that you haven’t.  For me that’s fun because it means there are always new surprises to find and new mysteries to uncover.

Oftentimes those mysteries surround a short-lived spinoff or packaging variation of a well-known brand.   Other times they include products that were around for such a short period of time, that no one remembers them at all.

Such may be the case with this early 70’s product from Topps; Ringers Bubble Gum.

I don’t remember Ringers gum, but based on what I’ve been able to figure out, it should have been released by Topps around 1970 or 1971.

I’ve managed to uncover a number of vintage pieces for Ringers, and while they’re all interesting, there is little consistency between them.  It’s made defining just what this product might have been kinda tough.

My favorite Ringers piece describes it as “The Adult Bubble Gum” – it is an unfolded display box that originally came out of Topps’ internal files – it’s also where I grabbed today’s title image:

This display box reveals a groovy Mod design sensibility, one made popular during the 1960’s.  We see that the gum itself has a flower-power look to it with one piece looking like it has been tie-dyed.   This display box also sports the tagline “The Adult Bubble Gum”, so it would seem that Ringers were meant to be marketed toward hip adults, rather than Topps’ normal child-age demographic.

In spite of this, the other Ringers piece I have is an unscored (uncut) display box file flat that appears to be targeting kids: 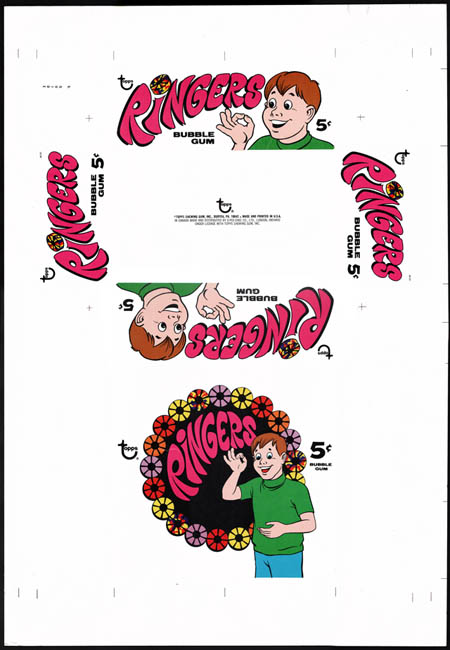 Unfortunately, I don’t have any individual pieces of Ringers packaging.  It’s possible that Ringers was never more than a test-marketed or internally-tested item, which may explain the lack of consistency in target or marketing approach.   This may also explain why the only known Ringers pieces have all come from internal Topps sources.   To my knowledge, there has never been a Ringers piece found in the wild.

Surprisingly, when I was researching this, I found that a seller on eBay is currently offering what appear to be two early concept illustrations for Ringers bubble gum.   I contacted the seller and he agreed to let me include them in this article (thanks, Bill!).

Both of these concept art pieces reveal a kid-targeted approach, with one of them showing a kind of pouch for the packaging, appearing very similar to Topps’ Gold Rush bubble gum. 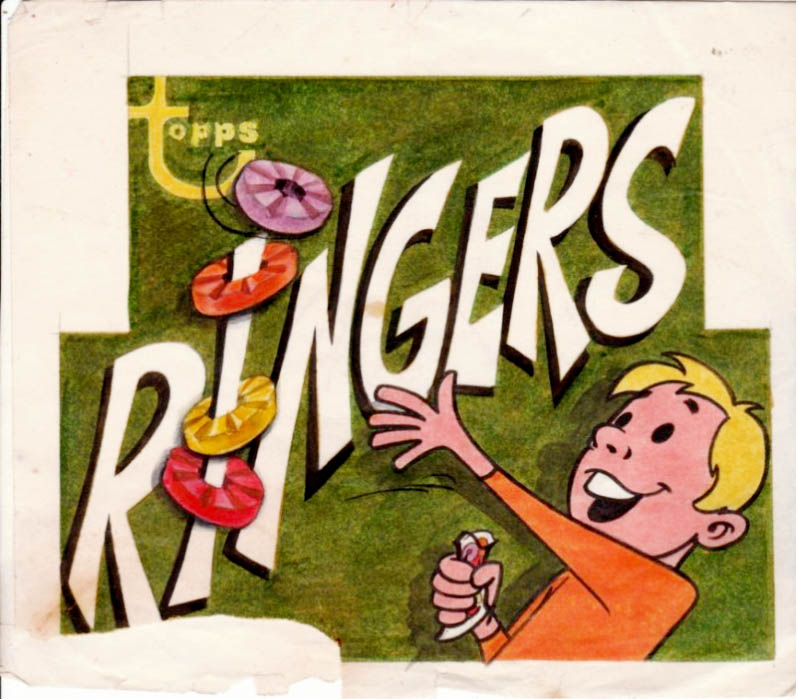 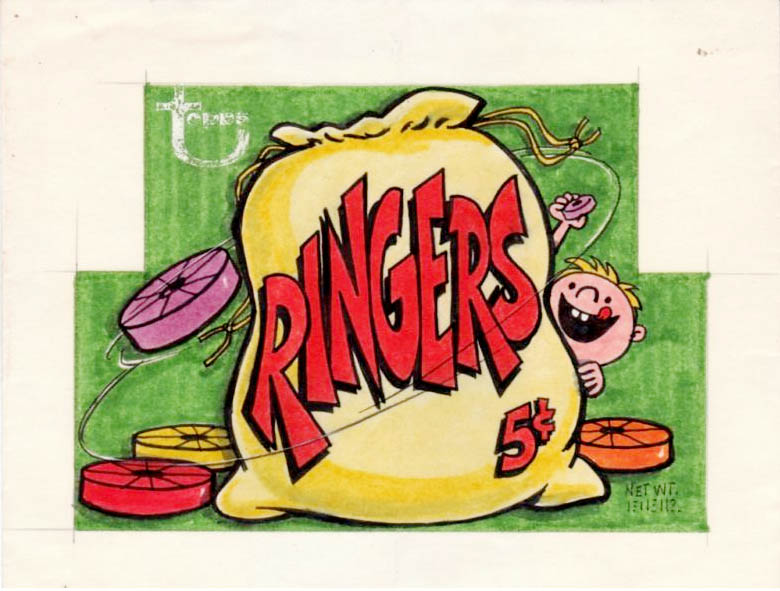 That’s all I really have on Ringers bubble gum.  I don’t know whether “The Adult Bubble Gum” ever made it onto store shelves, but if it did, I hope to one day find one of those roll wrappers – or maybe an unopened pack.   For now, Ringers remains in the mystery files of CollectingCandy.com.

A New York City based writer, editor and sometimes actor. After spending much of the 1990′s in the comic book business helping tell the stories of Marvel Comics’ X-Men as series editor, he has since split his time between developing his own entertainment properties while still consulting and working on others. Having been described as “the Indiana Jones of lost and forgotten candy”, Jason is one of the country’s premier candy collectors and historians with his discoveries appearing in countless blogs, magazines, newspaper articles, and books. Always happy to share his knowledge and unique perspectives on this colorful part of our popular culture, Jason has consulted with New York’s Museum of Food and Drink and has also been a featured guest on Food Network’s Heavyweights, France’s M6 Capital, and New York’s TheActionRoom.com. My Google Profile+
View all posts by Jason Liebig →
This entry was posted in 1960's, 1970's, Bubble Gum, Topps and tagged 1960's, 1970's, 60's, 70's, bubble gum, bubblegum, candy, collectible, collecting, collector, confection, counter-culture, flower power, gum, hippie, mod, non-sport, packaging, sweets, Topps, wrapper. Bookmark the permalink.

2 Responses to From the Mystery Files: Ringers – The Adult Bubble Gum.