They say imitation is the sincerest form of flattery.  If that’s true, then Philadelphia Chewing Gum was an irrepressible flatterer when they released Mountain Chew in the 1980’s, a bubblegum product that managed to pull inspiration from two iconic brands: Big League Chew and Mountain Dew!

Before getting to the bubblegum, it might be helpful to look back at the early marketing and branding for Mountain Dew soda.  You see, when the brand was first launched, it really was marketed as a sort of “hillbilly soft drink”.

Their mascot was “Willy the Hillbilly”, as you can see in this vintage commercial from the 1960’s:

The tagline from those commercials and much of the Mountain Dew advertising at the time was “Ya-hooo! Mountain Dew”, as you can see on this vintage clock:

And while the hillbilly mascot character and tagline had been retired since the early 1970’s, they were brought back for Mountain Dew’s real cane sugar “Throwback” product in 2010: 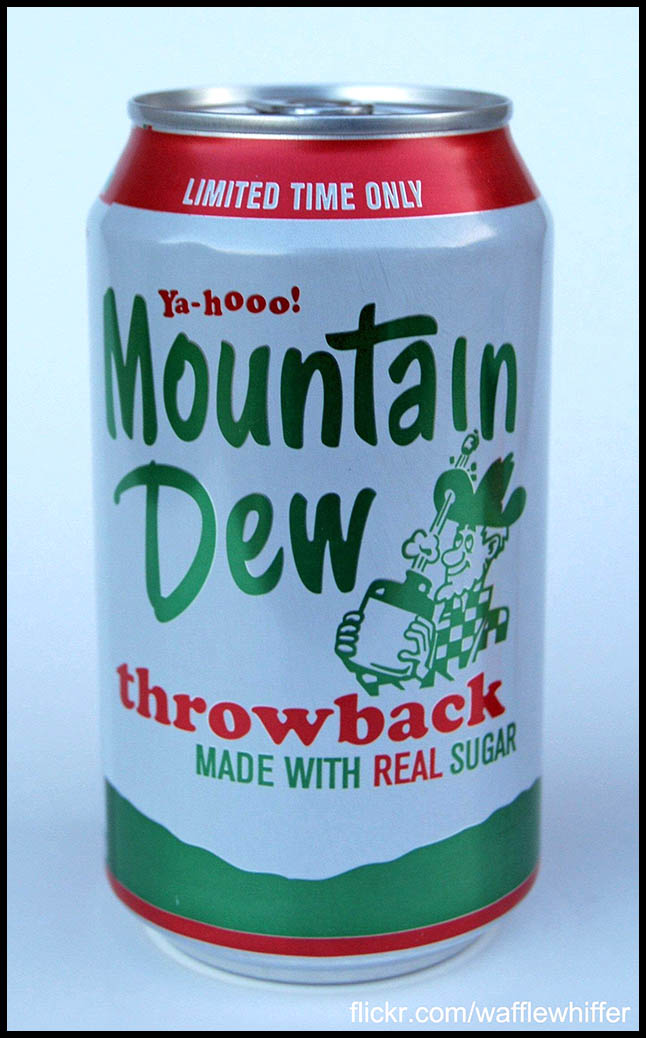 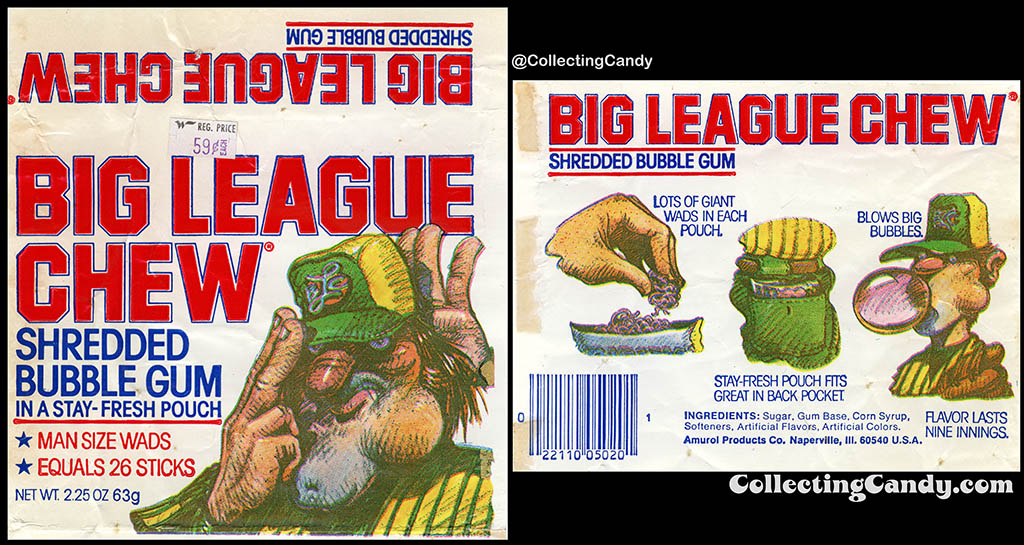 Introduced in 1980, Big League Chew was the first shredded bubblegum to be brought to market and it was the first gum of any kind to be sold in an oversized foil pouch.  It became one of the biggest confectionery introductions of the 1980’s and a huge hit, eventually becoming an iconic brand that is still sold and beloved, thirty-eight years later.

So, that’s the background and the perspective needed to look at today’s subject with the proper eyes.

After the launch of Big League Chew, there were many attempts to latch onto its success, not only by Amurol-Wrigley itself, but by competitors.  One of those competitors was the Philadelphia Chewing Gum company, makers of Swell bubblegum.  A company with a rich history of its own, it would take a stab at the shredded bubblegum market sometime in the 1980’s with a product that took quite a lot of inspiration from both Big League Chew AND Mountain Dew, with what I like to describe as a bit of a mash-up product: Mountain Chew.

Let’s see, they’ve got Mountain Dew’s “Ya-hoo!” tagline and hillbilly/country aesthetic, they’ve got Big League Chew’s “Chew” name, shredded gum, foil pouch design, and even the “Equals 26 Sticks” call out.  By taking some of the successful aspects of Big League Chew as well as Mountain Dew, it might have seemed like a can’t fail prospect.  But Mountain Chew wasn’t around all that long, and I suspect even people old enough to remember it might be seeing it for the first time on this site.  Anyone remember trying this back then?

And while Mountain Chew might not be the most original product in all of confectionery history, it stands as one I find particularly delightful for its unusual mash-up of, let’s call it “inspired”, branding.  Here’s a look at an actual example of a Mountain Chew bubblegum pouch from my collection and archives:

It’s pretty terrific stuff, in my opinion.  The history of the confectionery business is one that is rife with innovation and creativity, however the battle for shelf space has meant that there’s also the occasional  “me-too” or copycat products that have made it to market over the years.  And I think they’re all worthy of recognition, each in their own ways.

But it does give me pause to consider how cool it would be to had an actual Mountain Dew flavor edition of Big League Chew, complete with vibrant green shreds!  Hmmmm….

I should also like to point out that today, February 6th, is the sixth anniversary of the launch of CollectingCandy.com!  We launched back in 2012 with an in depth retrospective on Big League Chew bubblegum and what a fun ride it has been since then. Hooray!

In the ensuing years, I’ve published over 600 articles here and while my editorial output has slowed in the last couple of years, my passion for this site and for bringing you more on this subject matter has not waned.  I might not get here as often as I’d like, but I never stop working on the behind-the-scenes archiving and research that makes posts like this possible.  And that’s all for today.  See you next time!

A New York City based writer, editor and sometimes actor. After spending much of the 1990′s in the comic book business helping tell the stories of Marvel Comics’ X-Men as series editor, he has since split his time between developing his own entertainment properties while still consulting and working on others. Having been described as “the Indiana Jones of lost and forgotten candy”, Jason is one of the country’s premier candy collectors and historians with his discoveries appearing in countless blogs, magazines, newspaper articles, and books. Always happy to share his knowledge and unique perspectives on this colorful part of our popular culture, Jason has consulted with New York’s Museum of Food and Drink and has also been a featured guest on Food Network’s Heavyweights, France’s M6 Capital, and New York’s TheActionRoom.com. My Google Profile+
View all posts by Jason Liebig →
This entry was posted in 1980's, Bubble Gum, Gum and tagged 1980's, candy collecting, candy collection, candy collector, candy wrapper collection, candy wrapper collector, collectible, collecting candy, confectionery, confections, Mountain Dew, packaging, packaging design, Philadelphia Chewing Gum, soda, sweets, Swell, vintage candy wrappers, wrapper. Bookmark the permalink.