When researching the history of candy, I sometimes come across things I’ve never seen before or didn’t previously know existed.  It often happens when I’m lucky enough to find a vintage store photo showing a candy display or aisle.

Today I’ll be sharing the story of my discovery-via-photo of the little known 1970’s Blow Pop Candies “Squarepack” along with its connection to Blow Pop’s earliest origins.  Make the jump to check it out!

I spend much of my research efforts in the quest to document the lost and forgotten parts of confectionery history (i.e. the things you cannot find online), which leads me down many paths.  One of the most obvious of those paths has been quite a few trips to libraries.

In this case, it was a trip to the New York Science and Business Library (or the SIBL as it is called) back in 2011.  I found myself pouring over an industrial packaging trade magazine archive from 1978, when I came across the following page:

I was delighted to finally find some quality photos of vintage candy product shown (there were LOTS of photos of machinery in this particular collection of trade magazines).  But what really caught my eye was something I’d never seen before… a soft-chunk style square foil pack featuring the Blow Pop logo! 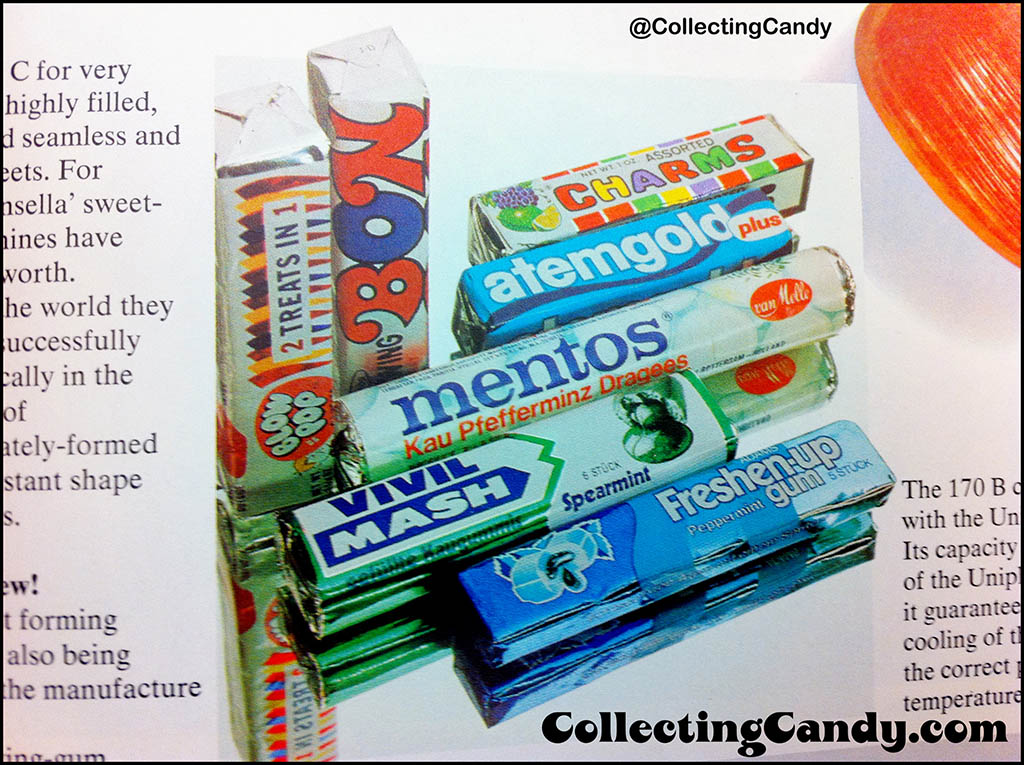 Up to that time, I’d never come across any images, references or evidence of any kind that such a product existed and I had no personal memory of it from the era, either.   I was amazed and intrigued and I wanted to learn more.

The magazine was dated January 1978, so I assumed the product was on shelves by 1977, and the square pack format lead me to a series of deductions.  You see, just a few years earlier Bubble Yum bubblegum had launched in the United States, and it was one of the biggest sales hits in the history of bubblegum.   Bubble Yum’s launch of the “soft chunk” bubblegum category lead to historic sales levels, along with every other gum manufacturer rushing to get a competing product on shelves.  So it was easy to see where the Charms Company (maker of Blow Pops) saw an opportunity to offer their signature bubblegum pop in a format and package familiar to the hordes of new soft chunk bubblegum fans.

After discovering that photo, a pack or wrapper for a Blow Pop Candies squarepack became high on my want list, and my hunt for it began.  In the ensuing years, I would identify a grainy image of a pair of display boxes for the product in the background of an old Charms promotional sales flyer which you can see here: 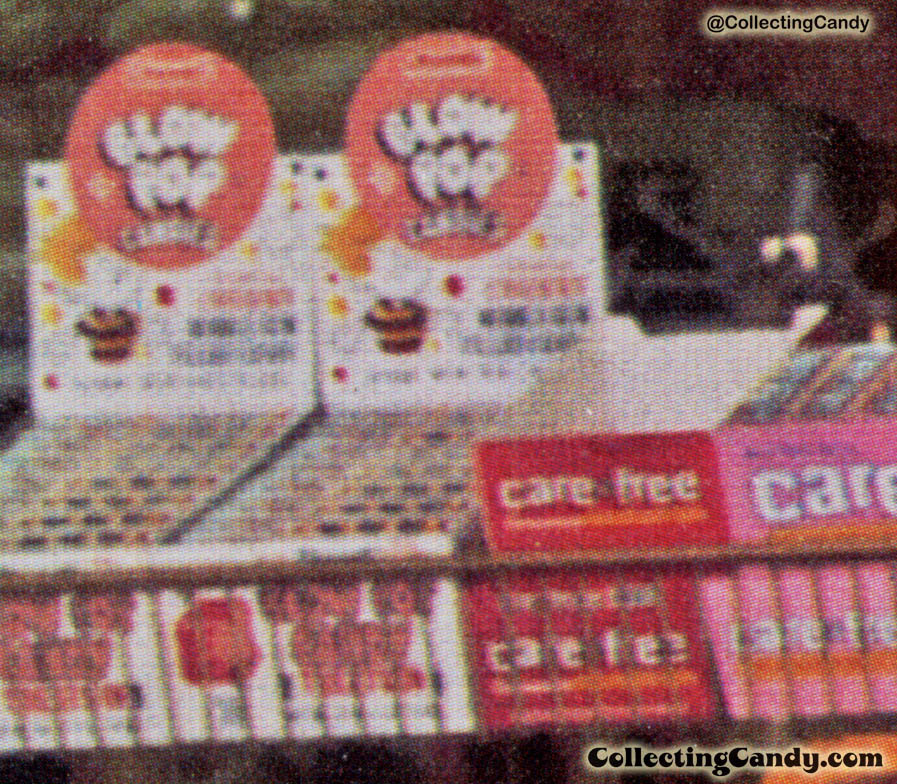 And finally, just over a year ago, I acquired a small lot of candy packaging and wrappers from the late 1970’s to early 1980’s – and within that small group of items was a near-perfect example of one of the Blow Pop Candies wrappers.   After five years of searching, I finally had the piece in hand and it was beautiful.

As I often do, I will note that this post represents the very first time this candy has been shown anywhere online, so you won’t find a single photo or mention of them anywhere else but here on CollectingCandy.com: 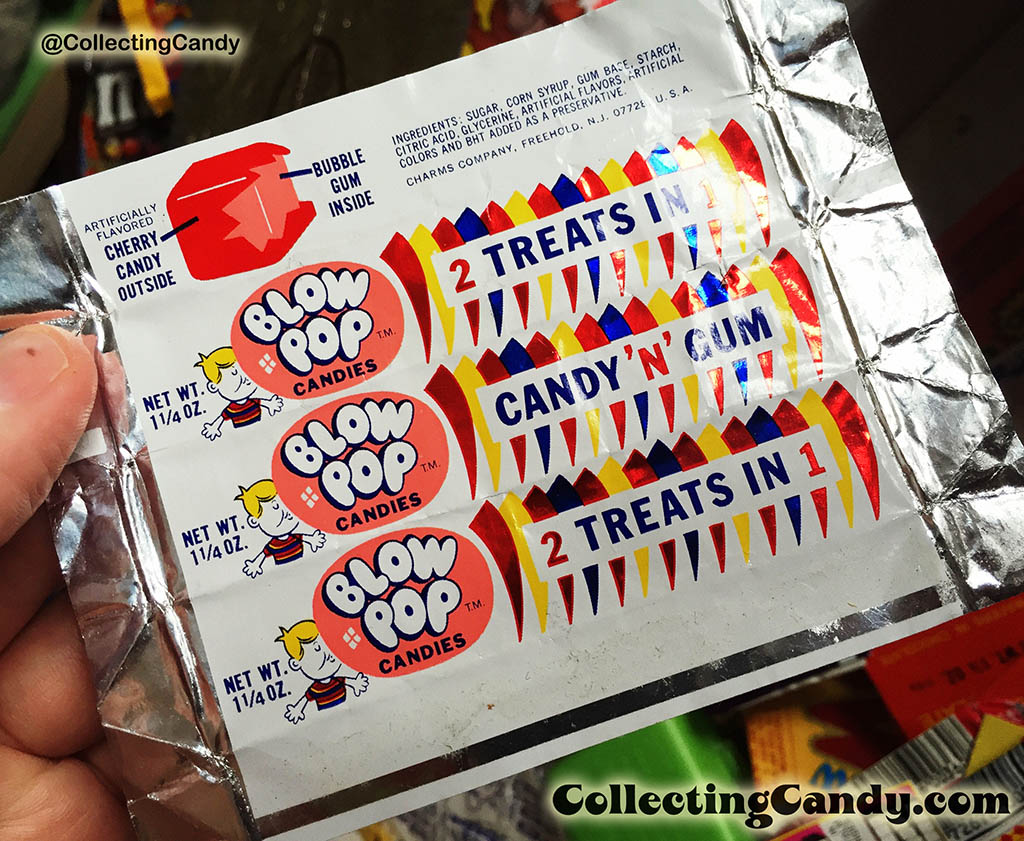 It is a particularly appealing vintage wrapper, featuring the classic “kid mascot” from Blow Pop packaging along with striking spots of colored foil showing through. 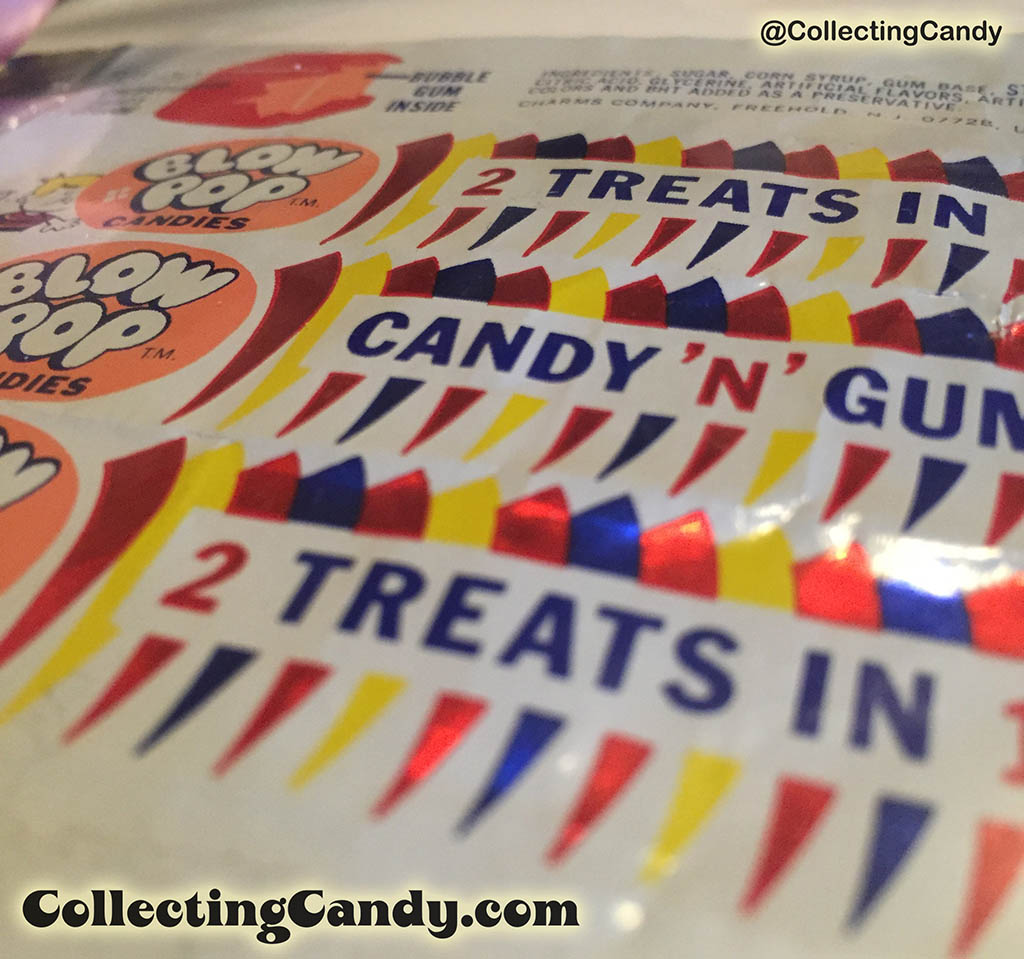 And finally, here is a look at my archived scan of the flat wrapper – it’s a beauty:

It’s so great to not only discover a piece like this, what is essentially a long-forgotten extension of the iconic Blow Pop brand, but to be able to document it and share it.

Just as exciting, after more research, I’ve learned that even though “Blow Pop Candies” were a spin-off of the Blow Pop, the underlying format of the Blow Pop Candies square pack may have been responsible for the initial creation of Blow Pops themselves.  That might sound confusing and the thread of this historic tale risks becoming serpentine, so I’ll endeavor to keep it as clear as possible.  We’re going to jump back to Blow Pop’s origins, before we jump back even further to my full-circle theory of invention.

First, we must look at Blow Pop’s earliest days as a product.  My research shows that Blow Pop launched nationally in late 1971, with an earlier period of regional test-marketing as announced in the following industry trade clipping:

That clipping mentions early TV commercials featuring Henny Youngman as “The Professor”, but unfortunately it appears that none of those commercials have been archived and uploaded to the net.  For now, we’ll just have to imagine what they were like but if anyone finds them, please let me know!

So, Blow Pops launched in 1971 with a great deal of fanfare and optimism for them.  That confidence turned out to be warranted as Charms Blow Pops are still around nearly half-a-century later and have become an iconic confectionery brand.  I’m lucky to have a few other earlier pieces of Blow Pop packaging in my archives, including an early wax-style wrapper (when the wrappers were closer to the material used for Tootsie Pop wrappers) before they transitioned to the plastic/mylar style still used today.  Here it is:

I love that early Blow Pop wrapper as the more plastic-style wrappers they transitioned to (and still use today) are nearly impossible to remove without damage – making them a challenge to collect and archive.  Here’s one wrapper example from the later 1970’s made of the new material: 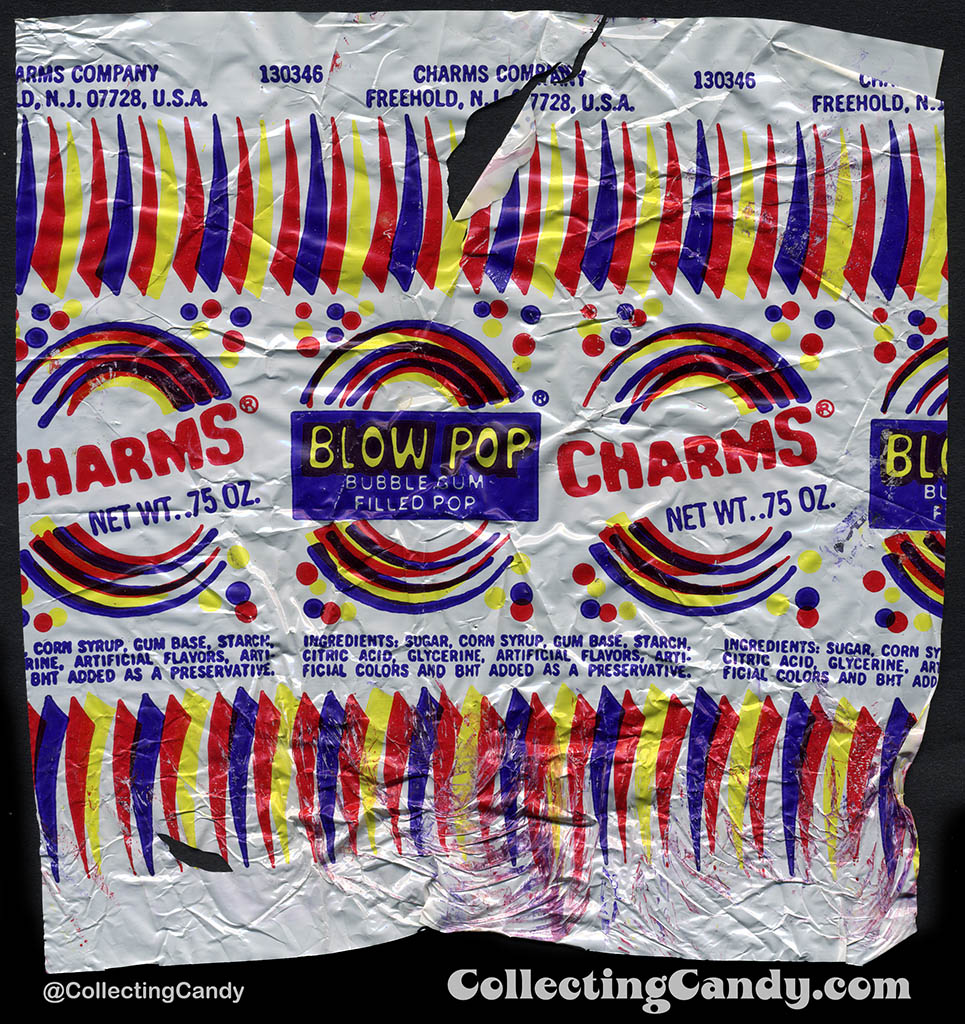 I should note that while individually-sold Blow Pop wrappers do feature a somewhat updated design, if you buy bags of classic Blow Pops, the wrapper design used within those has barely changed from the version launched in 1971.  It’s a remarkably consistent package design.

Here’s a look at a vintage ad for Charms featuring the one of the great “kid mascot” multi packs: 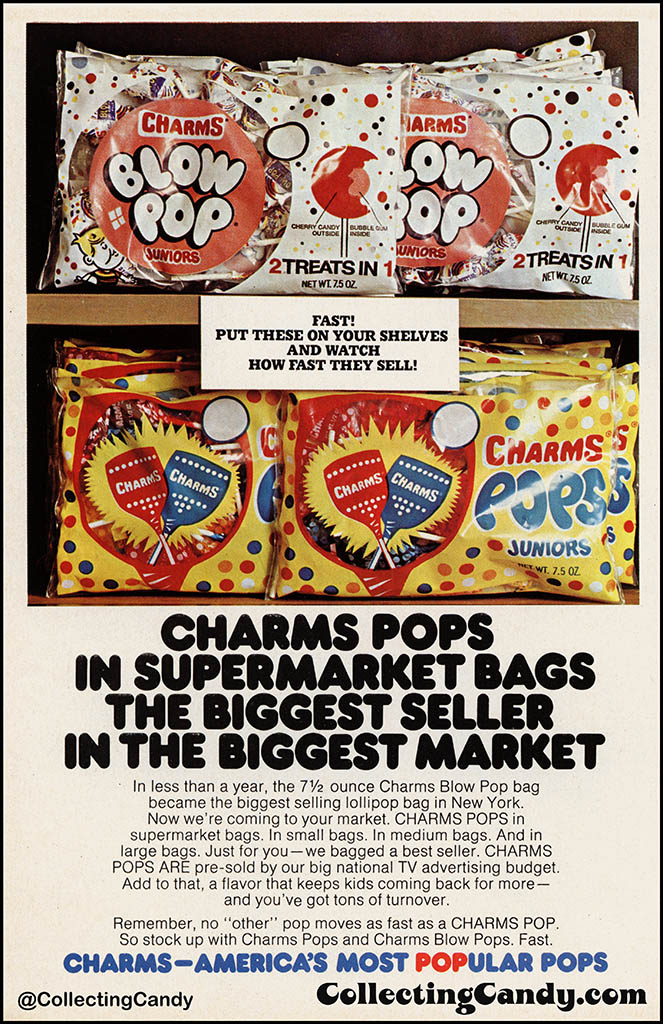 And here is a piece I was excited to trade for last year – one of those early kid-mascot multipacks, featuring a mail-away Magic Set offer: 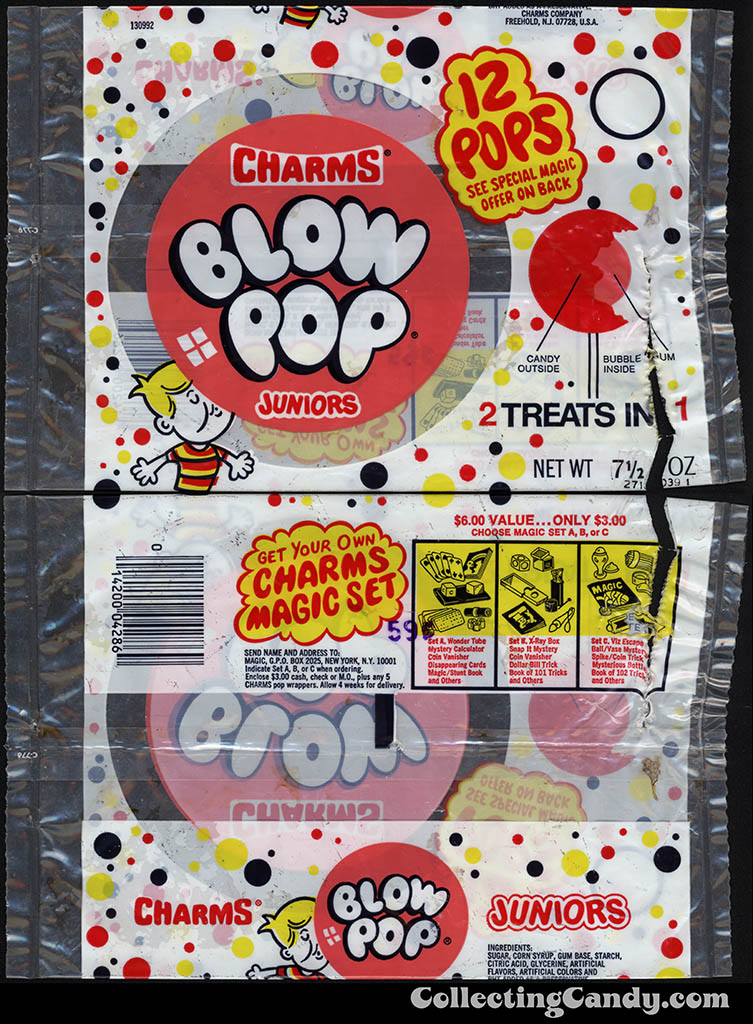 So as you can see, Blow Pop was a hit from the very beginning.  But how did Charms come up with the Blow Pop concept?  My theory is that it was directly evolved from their earlier efforts at combining their hard candy and bubblegum.   You see, back in 1967, Charms first merged these two confectionery treats with their Charms Bubble Candy: 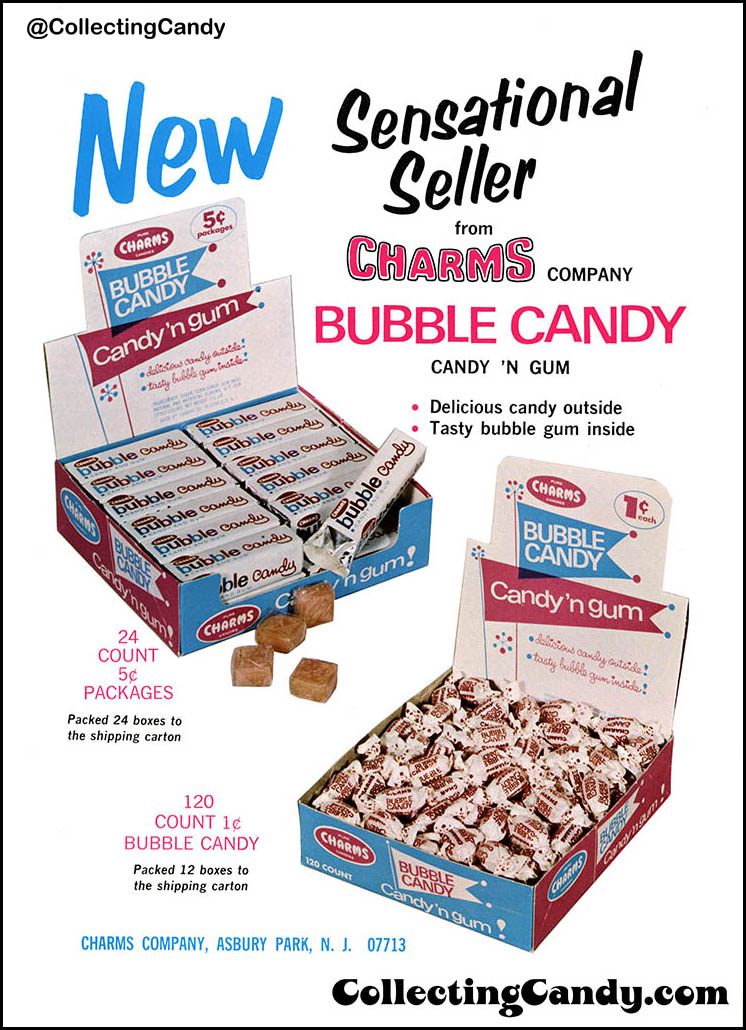 Yes, years before Blow Pops were even test marketed, Charms had created a product that offered bubblegum wrapped up in a delicious candy shell.   Based on my research, it is the clear precursor to Charms Blow Pop and also presents a near-identical product to the Blow Pop spin-off product Blow Pop Candies in the square pack from 1977.   Here they are side-by-side:

So, Blow Pop Candies were a spin-off of Charms Blow Pops which were an evolution based on Charms Bubble Candy which was the same product that would eventually become Blow Pop Candies.  Or something.  Whew!

The epilogue to all of this is that, while Blow Pop continued to be a sales success for Charms year-after-year, the square pack Blow Pop Candies only lasted a year or two.  But Charms has continued to play with putting Blow Pops into a bite-size format.  In the 1990’s, there were Blow Pop Bytes and Blow Pop (Gum) Balls: 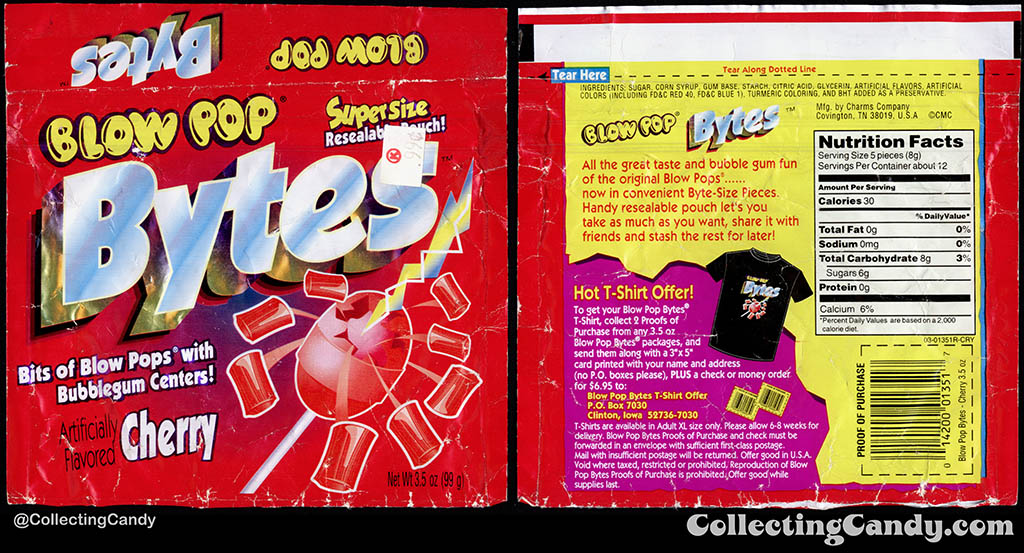 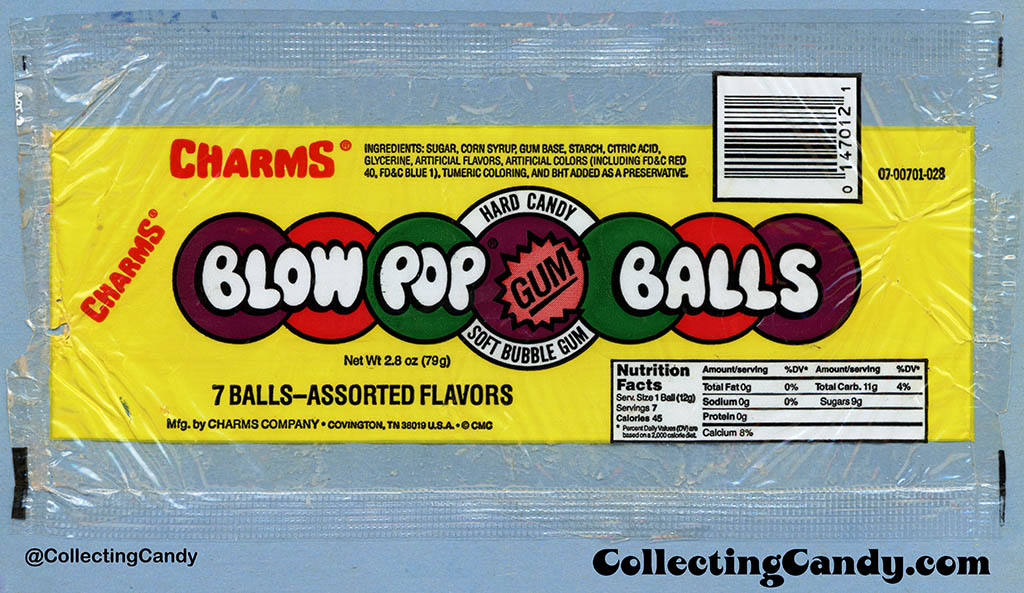 Finally, around 2009, Blow Pop launched Blow Pop Minis, which have managed to become a staple, every year since. 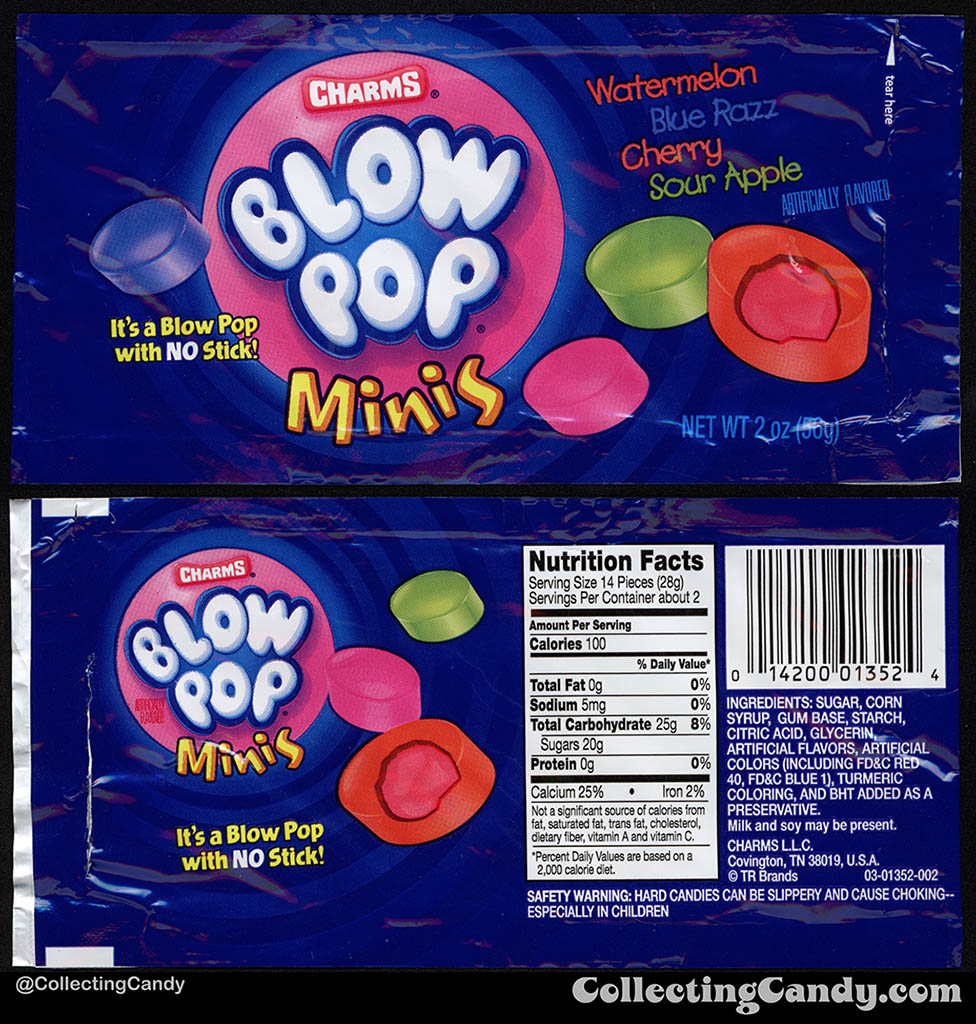 The larger re-sealable Blow Pop Minis pouches have become a part of holiday assortments for a number of seasons, as you can see with this Valentine’s lineup from a few years back. 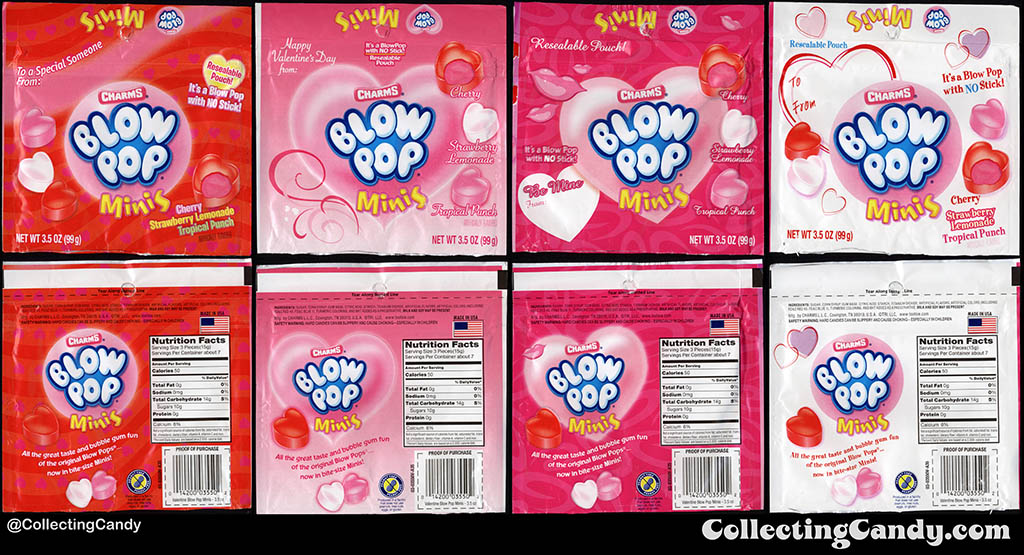 If you’ve made it this far, I hope I’ve successfully and clearly shown how my search for the previously-lost-to-history Blow Pop Candies “Squarepack” not only allowed me to document that individual piece, but also provided me an anchor to explore the very earliest origins of the Blow Pop brand, along with some of its later descendant spin-off products.

And that is everything I’ve got on my finally-successful search for the 1970’s Blow Pop squarepack, and the earliest origins of the iconic Charms Blow Pop.   See you next time!

A New York City based writer, editor and sometimes actor. After spending much of the 1990′s in the comic book business helping tell the stories of Marvel Comics’ X-Men as series editor, he has since split his time between developing his own entertainment properties while still consulting and working on others. Having been described as “the Indiana Jones of lost and forgotten candy”, Jason is one of the country’s premier candy collectors and historians with his discoveries appearing in countless blogs, magazines, newspaper articles, and books. Always happy to share his knowledge and unique perspectives on this colorful part of our popular culture, Jason has consulted with New York’s Museum of Food and Drink and has also been a featured guest on Food Network’s Heavyweights, France’s M6 Capital, and New York’s TheActionRoom.com. My Google Profile+
View all posts by Jason Liebig →
This entry was posted in 1960's, 1970's, 1980's, 1990's, Bubble Gum, Gum, Hard Candy, Lollipop and tagged Blow Pop, bubble gum, bubblegum, candy collecting, candy collection, candy collector, candy wrapper collection, candy wrapper collector, Charms, collectible, collecting candy, confectionery, confections, gum, packaging, packaging design, sweets, vintage candy wrappers, wrapper. Bookmark the permalink.

6 Responses to The Search for the 1970’s Blow Pop “Squarepack” and Charms Blow Pop’s Earliest Origins!