Today’s post is one I am especially excited to publish as the Bonanza bar has been on my list of lost-to-history brands I’ve long sought to uncover evidence on.  Until today, there have never been images or references to the Nestle Bonanza bar anywhere online – not a single mention – it was un-Google-able – but no more.  This entry is not only about the Bonanza bar, but about how two similar product launches can lead to very different outcomes.  So make the jump to check out Nestle’s long forgotten Bonanza bar!

As I indicated in my introduction, information on the Bonanza bar has been non-existent online.  So my research on the brand was based solely on what I could find in my historical materials and what I could track down over the years.  The first hard evidence I found on Bonanza came in the form of a newspaper ad proof, dated 1964.  This would be the first time I’d see what the Bonanza bar looked like, and it also revealed the direction of the brand’s initial marketing campaign.  When it came to me a couple of years ago, this piece was brittle, torn and damaged, but thankfully it was complete and I was able to create a pretty good scan of it in spite of the damage the years had taken.  Here it is: 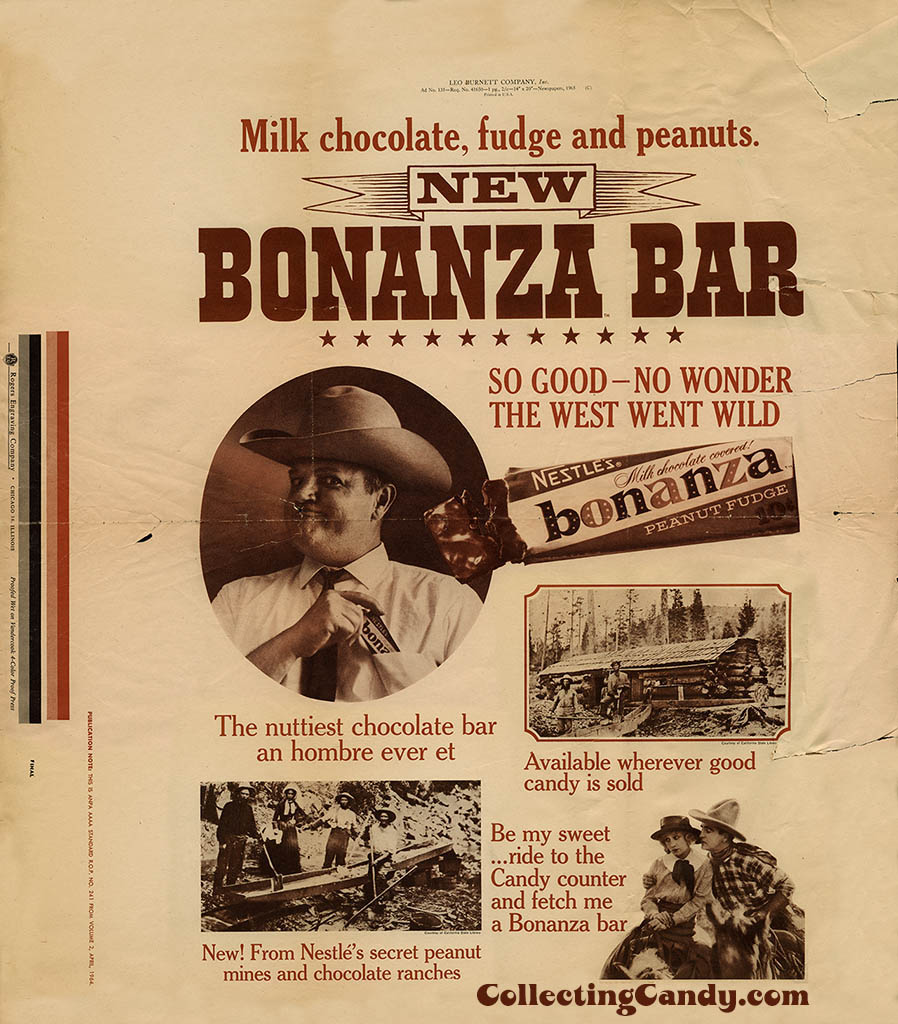 As you can see, the initial campaign took an old-west theme, which makes a lot of sense if you put the launch into perspective.  Just a few years earlier, the Bonanza television show featuring the adventures of Ben Cartwright and his sons launched to huge ratings across the country.  By 1964, the Bonanza television program was a favorite entertainment to millions of consumers and we can assume that Nestle believed it would be the perfect brand name to choose because of that fact.

I’m going to cover more on the implications of the Bonanza bar launch shortly, but first I want to cover the most exciting element of today’s post – my recent acquisition of an actual Bonanza bar.

I was contacted in early December by a friend and advertising collector who was clearing out some old candy pieces from his own collection and one of them was a Bonanza bar.  But it wasn’t just a wrapper – it was an unopened bar from the 1960’s!  Of course I agreed to acquire it and a few weeks later it arrived intact and still unopened, after half-a-century:

Publishing these kinds of images is especially satisfying for me knowing that the Bonanza bar will no longer be lost to history and is finally being documented.

Having an unopened chocolate bar from 50+ years ago is a remarkable thing, but my goal has always been documentation and long-term preservation.  I consider actual chocolate inside a package like this a danger to that long-term preservation goal, so I did open and remove the contents of this package.  The bar inside was remarkably well-kept, though the years of holding a chocolate bar did wear on the red-white-and-blue wrapper.  Here’s a look at the bar, moments after I opened the package: 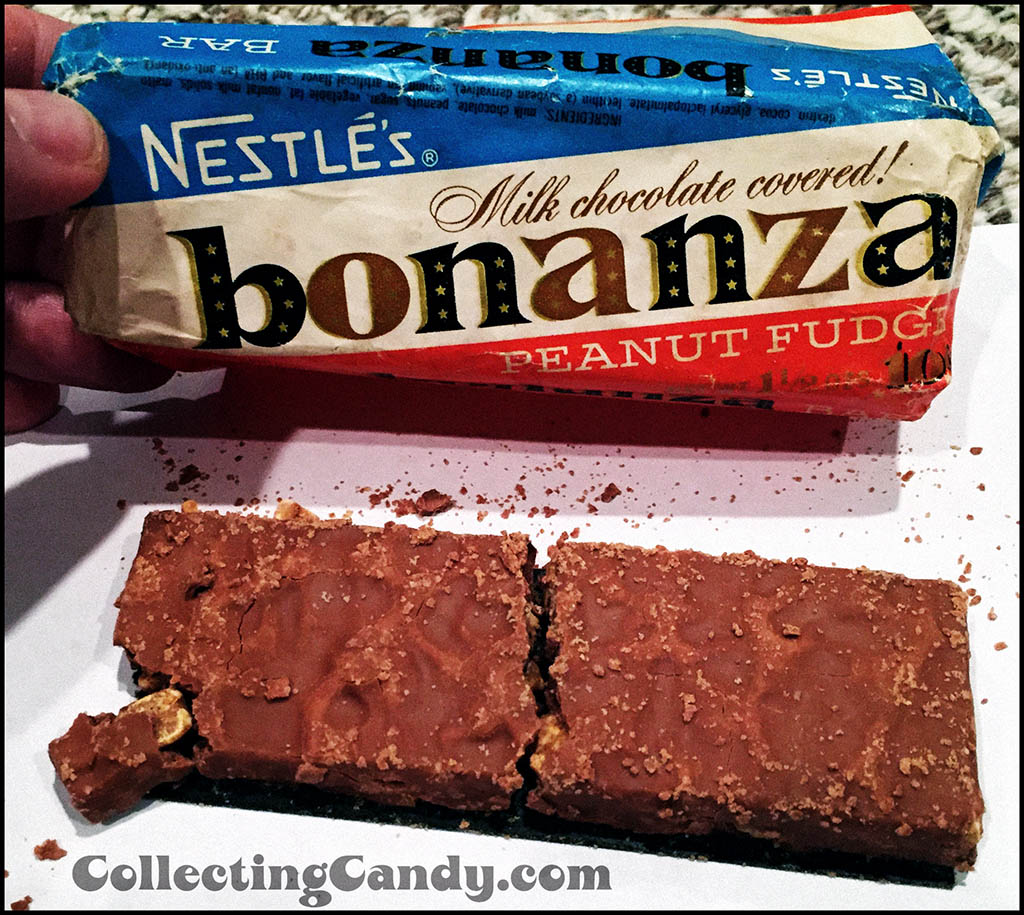 With great care and patience, I flattened the wrapper and endeavored to clean the residual guck that was left on it (a mix of the original adhesives that sealed the wrapper along with oils from the bar itself – a strange kind of greasy residue).  The result is a great look at (and currently the only known image of) the original Nestle Bonanza bar wrapper from 1964.  Here it is! 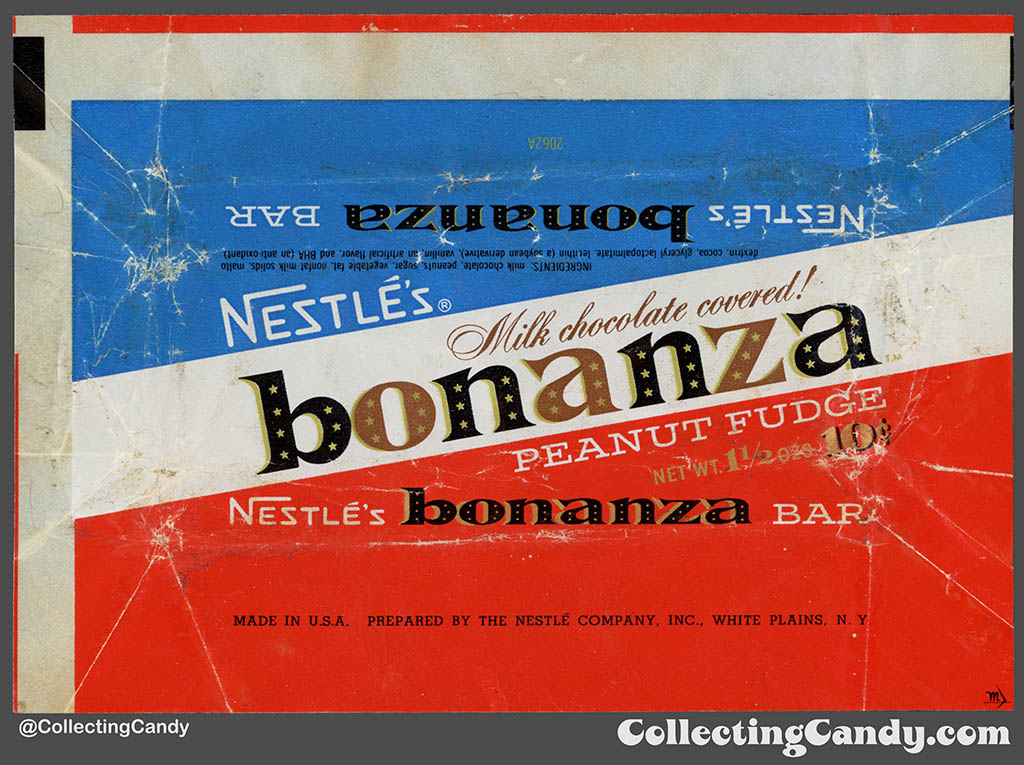 Now, for those of you with a historical interest, you may note that this wrapper shares some design commonalities with another Nestle launch from 1964, the $100,000 bar (now known as Nestle’s 100 Grand).  And that brings me to our tale of two product launches.

The Bonanza bar and the $100,000 bar both launched in 1964, and both share a similar design philosophy as you can see here:

Not only did both bars launch in 1964 and utilize a similar look, but it is said that the $100,000 bar’s name was inspired by a hit game show at the time, so both bars had brand names that may have been inspired by popular television programs.  The initial newspaper ad campaigns had some similarity as well, with one featuring a vintage gangster and the other a vintage cowboy: 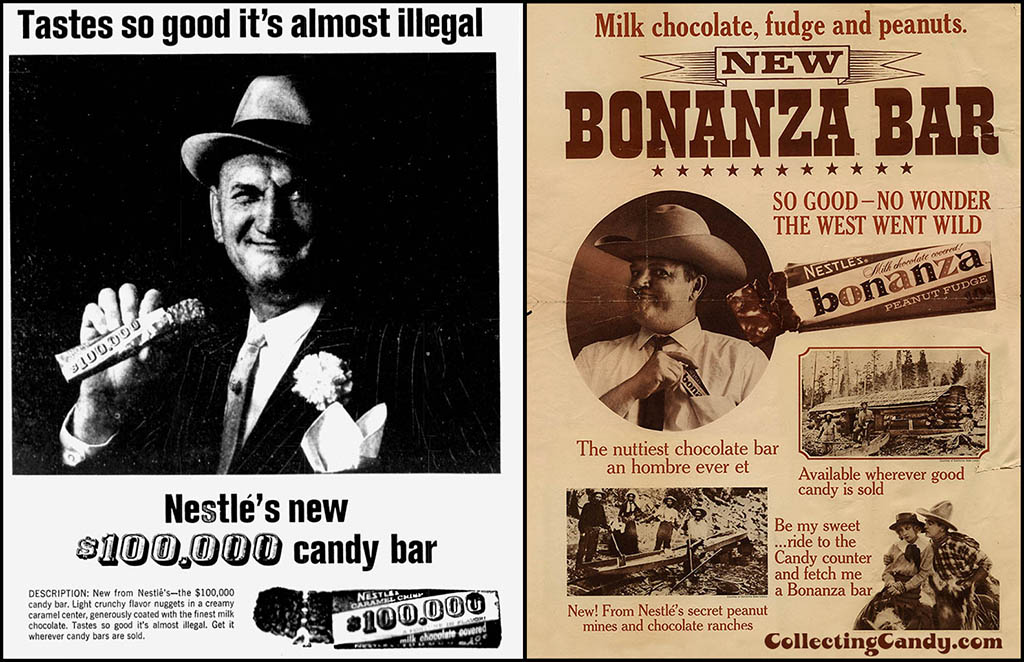 So both bars shared remarkably similar origins and yet one went on to become an iconic American brand recently surpassing 50 years on store shelves, while the other one only made a brief retail appearance before it disappeared and was forgotten (until today).

Unless someone with inside knowledge of the situation from that time comes forward with new information, it is unlikely that the tale of what made one a hit and the other one not will remain historical speculation, but at least now we can look back and wonder.

[Edit: Eagle-eyed reader and researcher John Simpson found a reference to the Bonanza bar in an unexpected place – the Google Books repository for Billboard magazine.  Within that mention, it is confirmed that the Bonanza bar first went into regional market testing and distribution in Buffalo, New York and Portland, Oregon before getting a national rollout.]

And that is everything I’ve got on the (previously) forgotten Nestle Bonanza bar and the tale of two product launches.  I hope you’ve enjoyed the look back and I’ll see you next time!

A New York City based writer, editor and sometimes actor. After spending much of the 1990′s in the comic book business helping tell the stories of Marvel Comics’ X-Men as series editor, he has since split his time between developing his own entertainment properties while still consulting and working on others. Having been described as “the Indiana Jones of lost and forgotten candy”, Jason is one of the country’s premier candy collectors and historians with his discoveries appearing in countless blogs, magazines, newspaper articles, and books. Always happy to share his knowledge and unique perspectives on this colorful part of our popular culture, Jason has consulted with New York’s Museum of Food and Drink and has also been a featured guest on Food Network’s Heavyweights, France’s M6 Capital, and New York’s TheActionRoom.com. My Google Profile+
View all posts by Jason Liebig →
This entry was posted in 1960's, Chocolate, Nestle and tagged 100 Grand, 1960's, 1960's candy, Bonanza, candy collecting, candy collection, candy collector, candy wrapper collection, candy wrapper collector, collectible, collecting candy, confectionery, confections, cowboy, cowboys, history, Nestle, old west, packaging, packaging design, product launch, sweets, vintage candy wrappers, wrapper. Bookmark the permalink.