We’ve arrived at the final day of Snickers week but as the saying goes we saved the best for last.  Well, it’s the best as far as I’m concerned.  That’s because today’s look at Snickers wrappers inspired by the “You’re Not Yourself When You’re Hungry” campaign goes full Gremlins.  Make the jump to check it out!

Mars’ “You’re Not Yourself When You’re Hungry” campaign has birthed a lot of classic commercials, several of which have been included our Snickers Week’s posts.  But one of the coolest ones they produced was never aired in the United States and it is the inspiration for today’s wrappers.  Take a look at this awesome “Snickers Gremlins” commercial spot (Directed by Gary Freedman):

That’s a great commercial and one that I’d referenced here on the site two years ago when I covered an earlier Snickers Gremlins tie-in.

That linked-to 2014 Gremlins tie-in came out of Mars Poland, the same region where today’s featured wrappers originated from, but the resulting 2014 wrapper wasn’t much to speak of: 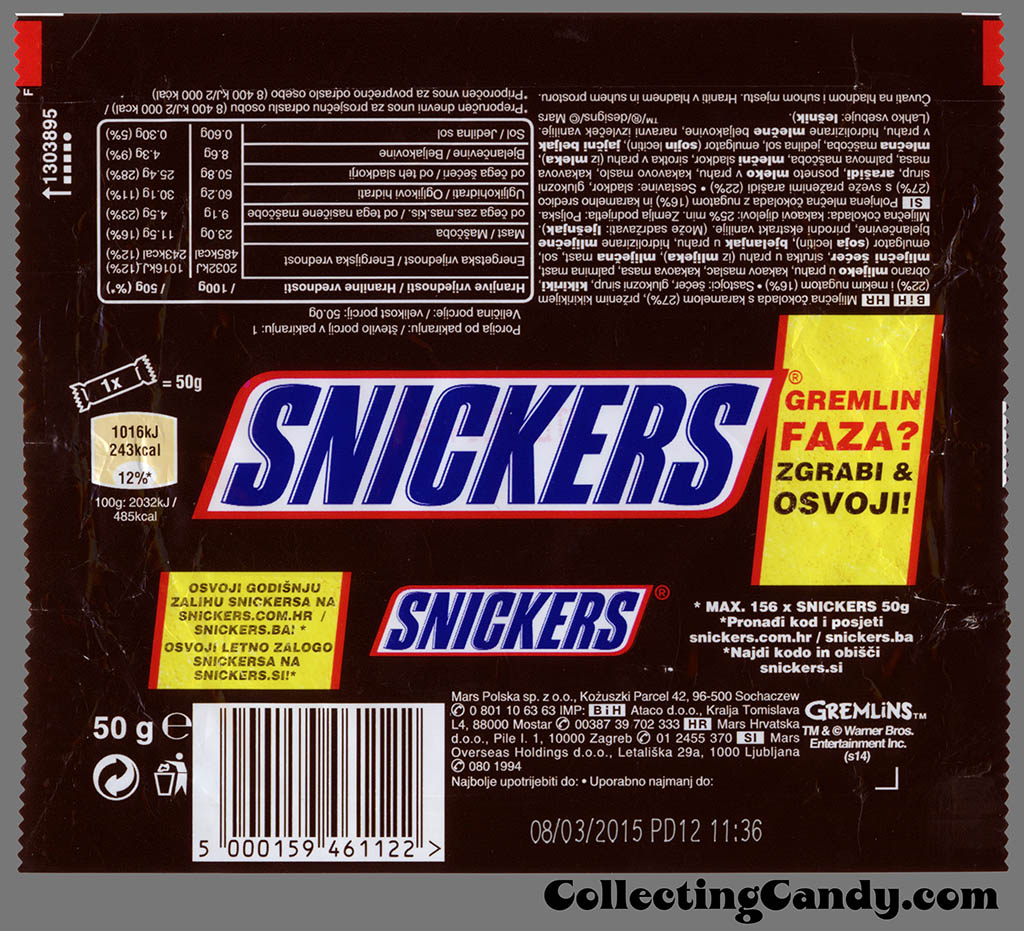 Though the wrapper itself was decidedly not-very-Gremlins, the point-of-purchase materials that came along with it had some highlights like this one: 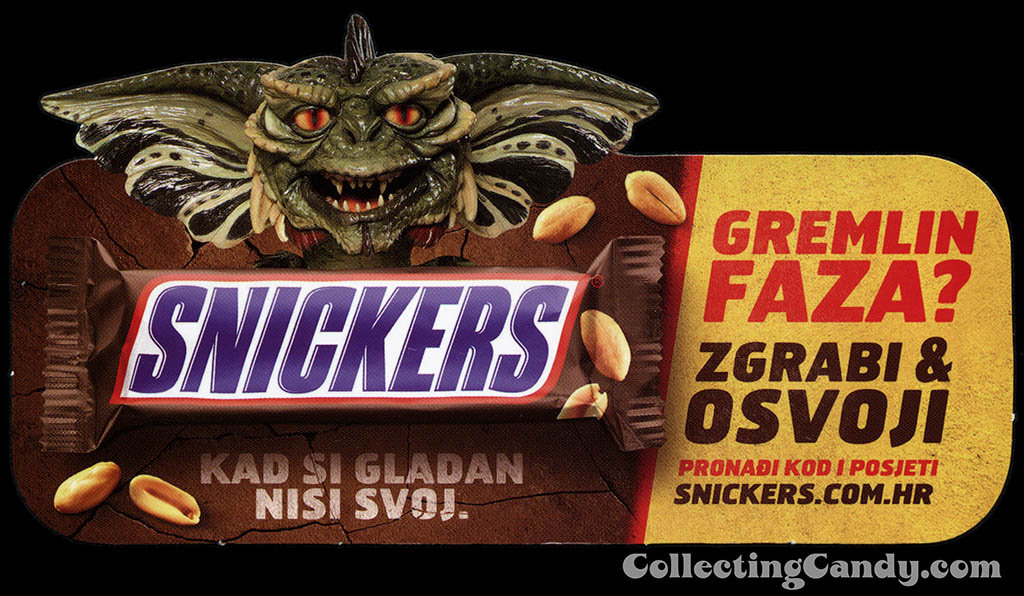 So those things were neat, but I was hoping for something a little more Gremlins-y evident on the wrapper itself.  I would eventually get that something when Mars-Mexico had its own Gremlins promotion that produced this appealing wrapper: 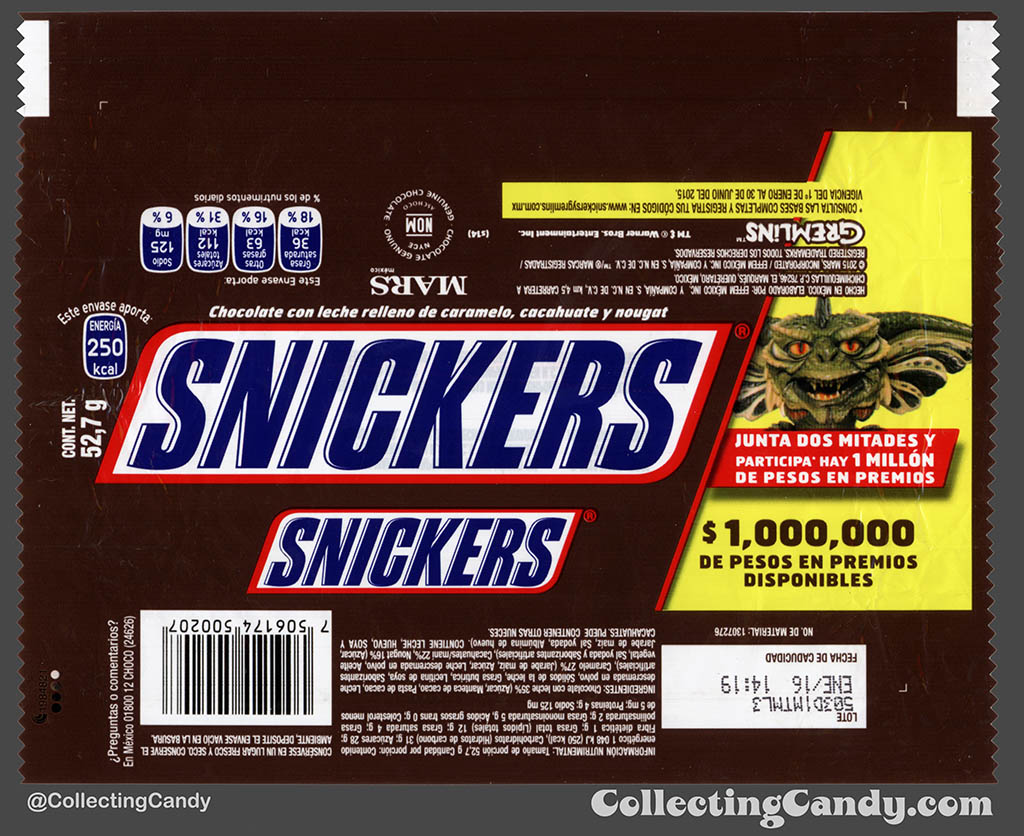 Now that’s more like it!  With that wrapper, we were finally seeing a Gremlins character get incorporated onto the Snickers packaging itself.  But it wasn’t until last year and the practice of swapping out the Snickers logo with “hunger traits” (which I’ve been showcasing all this week) that we finally got a full-on-Gremlins-takeover Snickers wrapper.

It goes back to Mars-Poland, who came up with the wonderfully inventive take on the hunger-trait-logo bars to give us a set of wrappers featuring the unintelligible vocalizations of a hungry Gremlin.   To me, these wrappers are instant classics and will go down as some of my all-time favorite Snickers bar packaging examples.  [Special thanks to Martin Mihal for finding these and sending them my way.]

There are three different Gremlin wrapper “phrases” in two different sizes each, for a total of six wrappers.  Here they are: 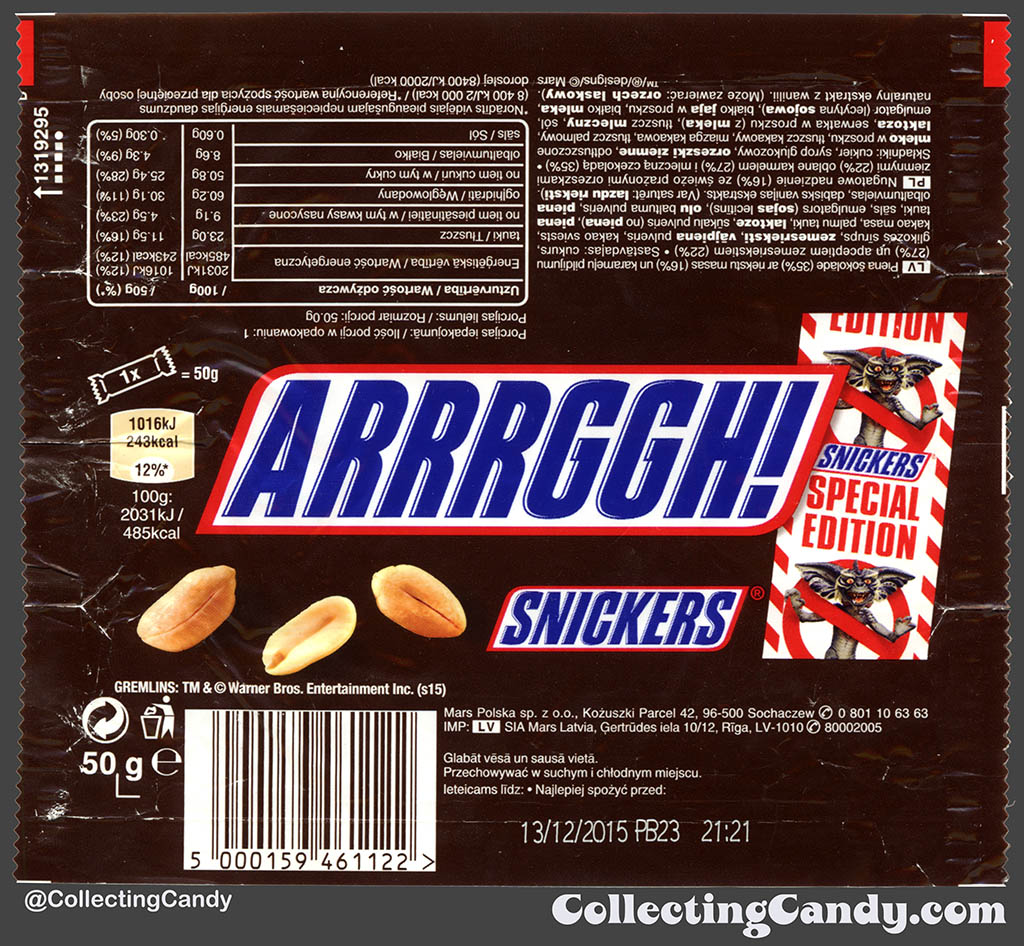 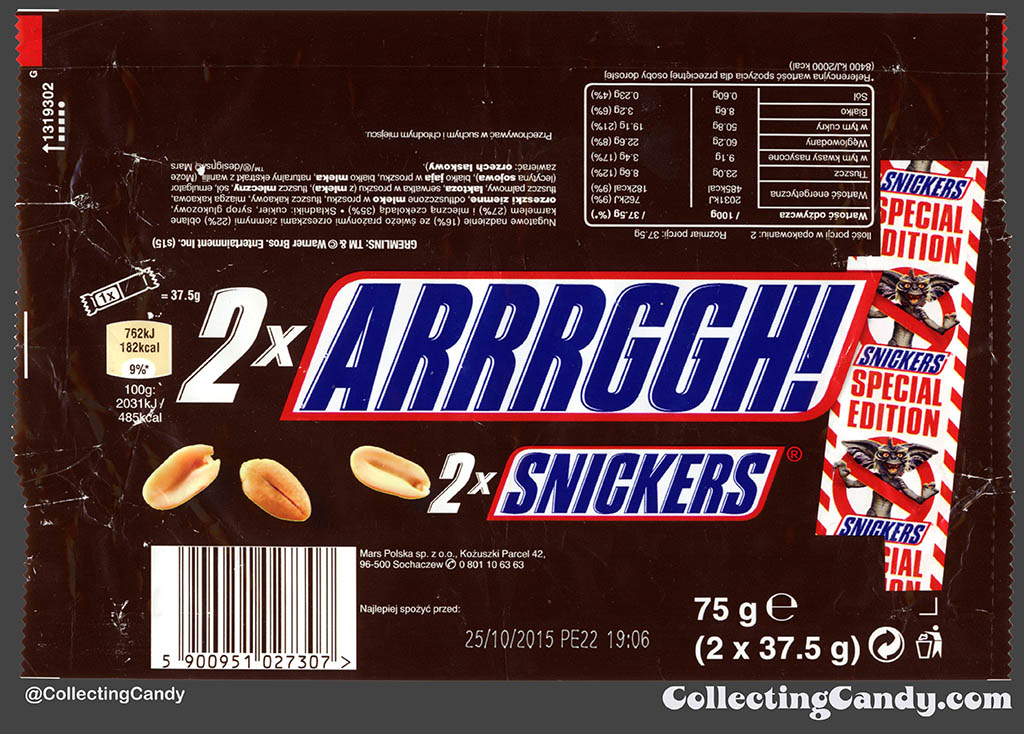 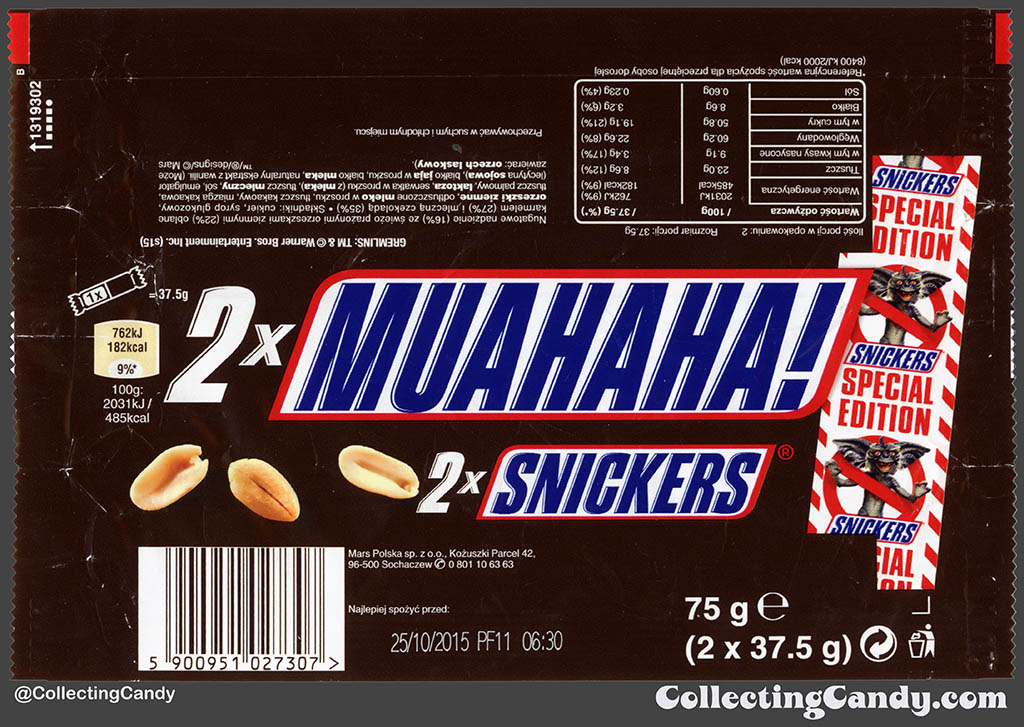 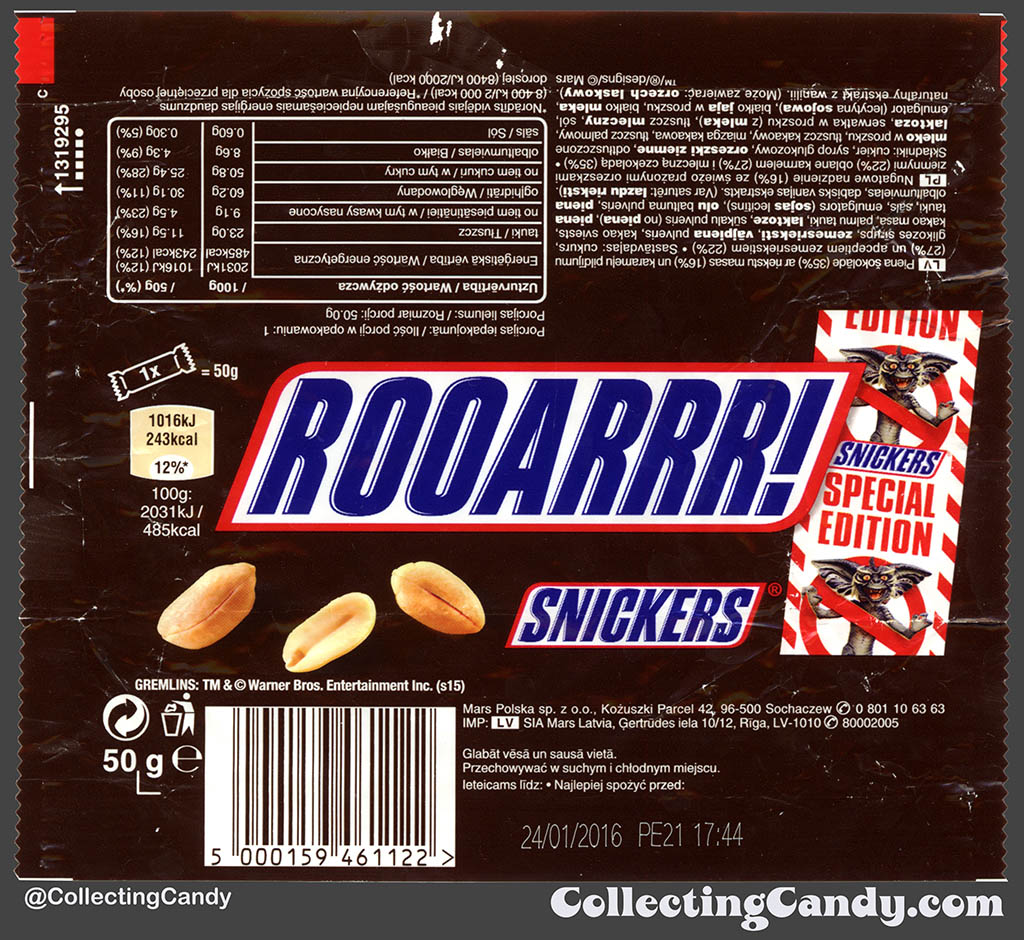 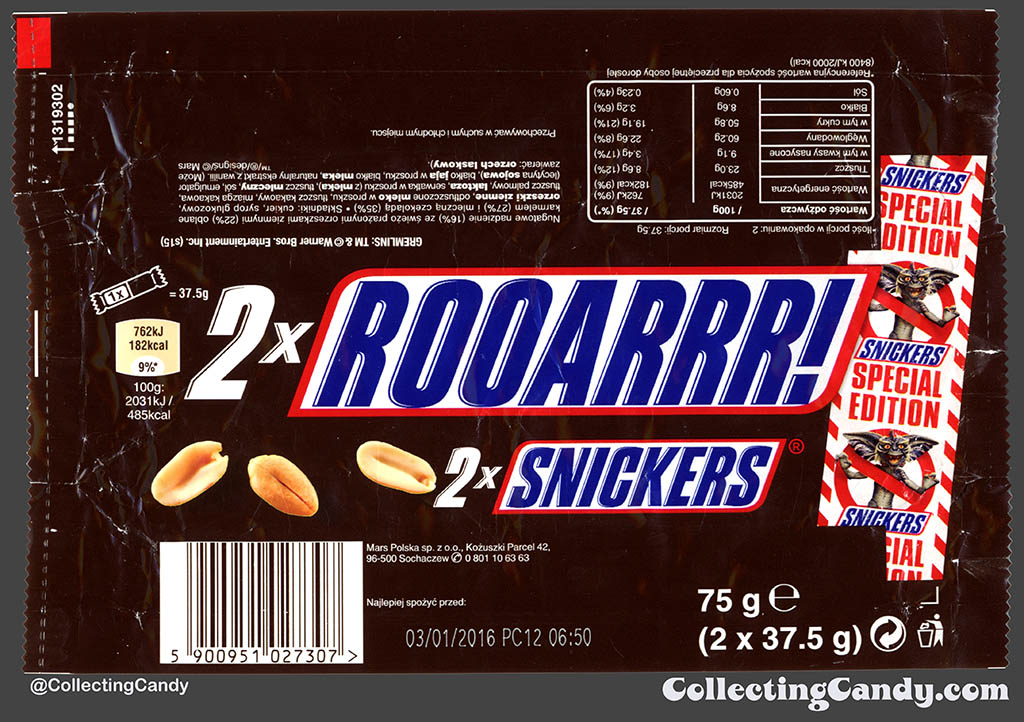 I think those are just awesome!  And it brings to mind the possibilities that could be had with this whole logo-swapping campaign:  Certainly there are other movies or fictional characters that could be invoked as we saw here with the Gremlins.  How about a Star Wars tie-in where the logo phrases included “The Force” or “Dark Side”?  Or Mars could endeavor to tie-in famous quotes associated with some of the celebrities they’ve featured in their commercials.  Or they could do holiday logo wrappers to go along with their seasonal tie-ins.  Imagine specialized Halloween phrases or Christmas phrases?  I’d love to get a “Krampus” Snickers bar or a “Santa” one, or how about a “Werewolf” logo Snickers bar?  I’m imagining how much fun this could continue to be if they really opened it up and went crazy with it.

[Note:  Mars USA have already expanded things a bit, as they have done a set of football-related trait-logo-swapped Snickers bars which are arriving in stores now, which I’ll preview one of now but which I’ll be covering fully around Superbowl time – so they have shown an interest in continuing with and expanding this concept.  Let’s hope they keep it up!] 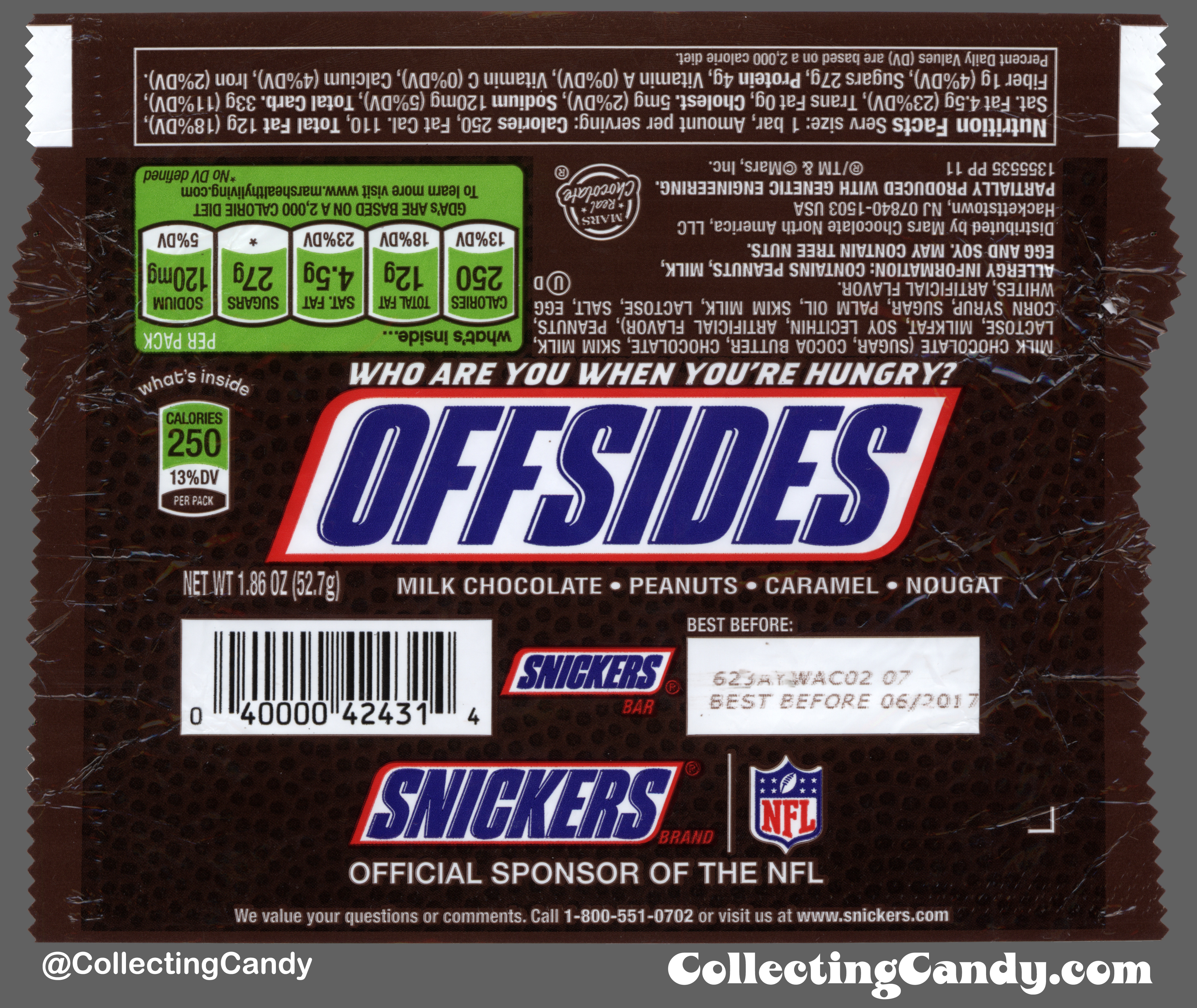 And with that, CollectingCandy.com’s Snickers Week is coming to a close.  It’s been a ton of fun bringing these connected pieces together and sharing them with you all.  In total across the five Snickers Week posts, there were 107 Snickers bar wrappers represented, coming from five different countries.

It took a lot of time and effort to acquire the different wrappers from around the world (and even the ones coming from my own country) and I could only have done it with the help of a lot of different people.  It was a real team effort, a global one in fact, and I am so grateful to have been able to call upon the friends that I did.

I’d also like to take this opportunity to point out that there are several other countries and other regions of “You’re Not Yourself When You’re Hungry” inspired Snickers wrappers that I have still been unable to acquire, but that I’d like to be able to add to my archives.  I’ve seen photos of wrappers online (and shown below) from parts of Europe and Beirut that I know I need and I’m sure there are others.

So if you’re from one of those areas or are traveling and want to contribute to my efforts of documenting these by picking up a few, please do and get in touch.  I’d love to get examples of these styles of Snickers wrapper from every region that they were offered.

And with that, my final Snickers Week post is concluded.  I hope you enjoyed today’s piece and the whole week of posts that preceded it.  Without anything more to add on these awesome Gremlins Snickers wrappers I will just say thank-you for checking it out and I’ll see you next time!

This post has been a part of CollectingCandy.com’s five-part Snickers Week (originally published November 28th-December 2nd in 2016) dedicated to the various “You’re Not Yourself When You’re Hungry” inspired Snickers bar wrappers from around the world – be sure to check out the rest of the week’s entries!

A New York City based writer, editor and sometimes actor. After spending much of the 1990′s in the comic book business helping tell the stories of Marvel Comics’ X-Men as series editor, he has since split his time between developing his own entertainment properties while still consulting and working on others. Having been described as “the Indiana Jones of lost and forgotten candy”, Jason is one of the country’s premier candy collectors and historians with his discoveries appearing in countless blogs, magazines, newspaper articles, and books. Always happy to share his knowledge and unique perspectives on this colorful part of our popular culture, Jason has consulted with New York’s Museum of Food and Drink and has also been a featured guest on Food Network’s Heavyweights, France’s M6 Capital, and New York’s TheActionRoom.com. My Google Profile+
View all posts by Jason Liebig →
This entry was posted in Chocolate, Mars and tagged #EatASnickers, 1980's, 80's, candy collecting, candy collection, candy collector, candy wrapper collection, candy wrapper collector, collectible, collecting candy, confectionery, confections, Gremlins, licensed, mascot, movie, packaging, packaging design, Snickers, Spielberg, Steven Spielberg, sweets, vintage candy wrappers, wrapper. Bookmark the permalink.