A Cowboy from the UK – The British Texan

Back in the 1970’s, UK-based Rowntree Mackintosh released their Texan bar with the tagline, “The Mighty Chew”.

With a cool mascot and a neat wrapper, it’s been one of the vintage UK brands I’ve become enamored with as I’ve learned more about it.   I’ve also set out to track down Texan pieces for my collection.

I finally picked up a standard Texan wrapper about a year ago.  The Texan, like many of my childhood favorites from the United States, appears to have lasted not long into the 1980’s.  Due to the fond memories associated with it, the Texan received a limited run nostalgia re-release in 2005.   Nestle, having acquired Rowntree-Mackintosh some years earlier, handled the release: 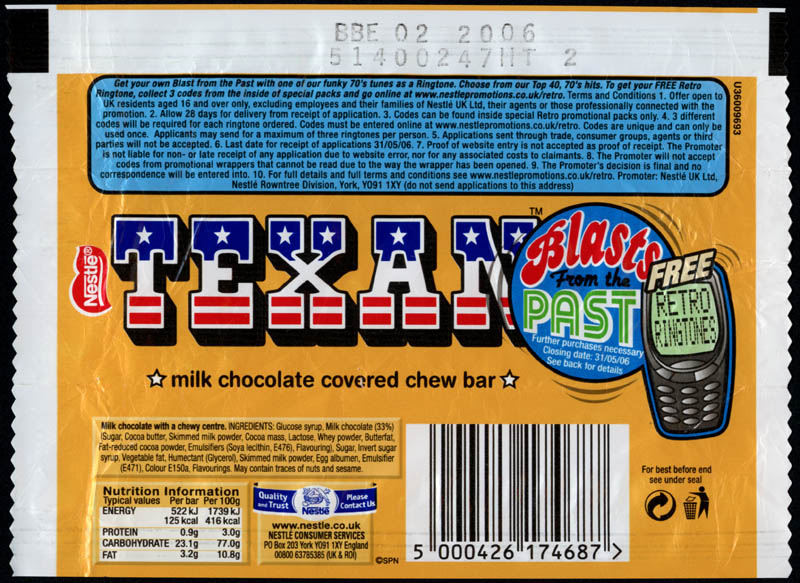 Aside from those wrappers, I’ve also picked up a pair of multi-pack wrappers.   Normally multi-packs tend to be less interesting than actual wrappers but in this case the packs are pretty cool as they feature the Texan cowboy mascot: 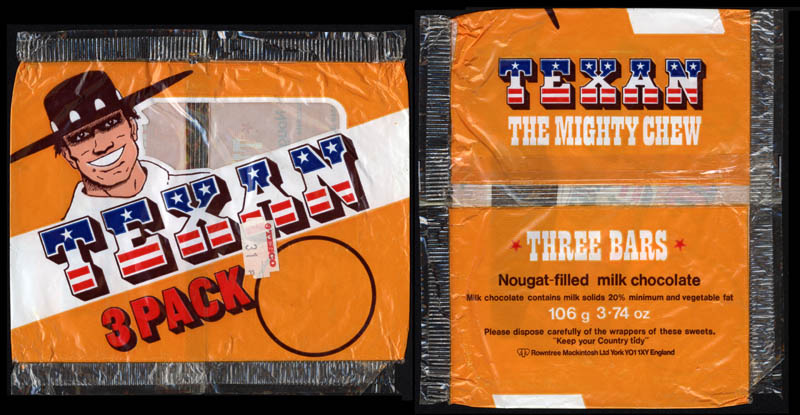 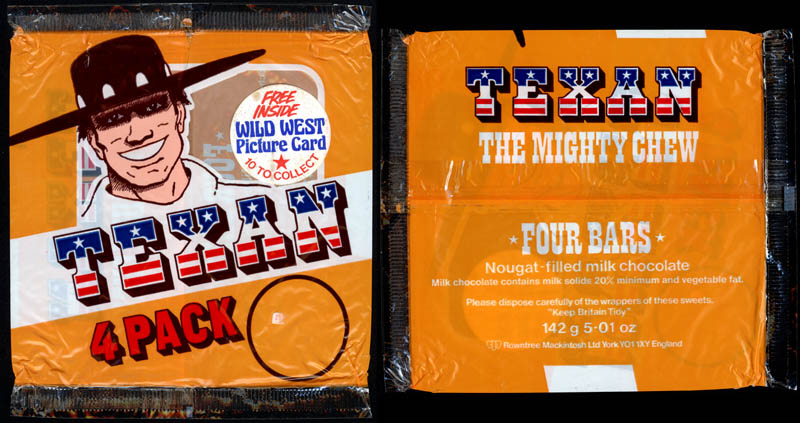 With those pieces, I felt my UK Texan bar collection was complete, but then I found this blurry image of something I’d never heard of before:

Yes, the Texan received an oddball-spinoff flavor extension – the Orange Texan.  So it would appear that my Texan collection isn’t as complete as I had thought.  And my hunt continues…

A New York City based writer, editor and sometimes actor. After spending much of the 1990′s in the comic book business helping tell the stories of Marvel Comics’ X-Men as series editor, he has since split his time between developing his own entertainment properties while still consulting and working on others. Having been described as “the Indiana Jones of lost and forgotten candy”, Jason is one of the country’s premier candy collectors and historians with his discoveries appearing in countless blogs, magazines, newspaper articles, and books. Always happy to share his knowledge and unique perspectives on this colorful part of our popular culture, Jason has consulted with New York’s Museum of Food and Drink and has also been a featured guest on Food Network’s Heavyweights, France’s M6 Capital, and New York’s TheActionRoom.com. My Google Profile+
View all posts by Jason Liebig →
This entry was posted in 1970's, British, Chocolate and tagged 1970's, 70's, British, chocolate, collectible, collection, confection, confectionery, nostalgia, retro, sweets, United Kingdom, vintage, wrapper. Bookmark the permalink.

1 Response to A Cowboy from the UK – The British Texan