Back in 2013, I kicked off our Countdown to Halloween with what was, at the time, my favorite vintage Halloween wrapper; one for a Brach’s Chocolate Covered Witch.  Today, that Brach’s Witch wrapper is getting some serious competition as I present an outstanding piece of previously unseen Halloween confectionery packaging from Heide – make the jump to check it out in all its spooky-fun glory!

I picked up this gorgeous Heide Witch wrapper earlier this Spring and when I did, I couldn’t wait for this month’s Countdown to share it.  The time has finally come, so here it is: 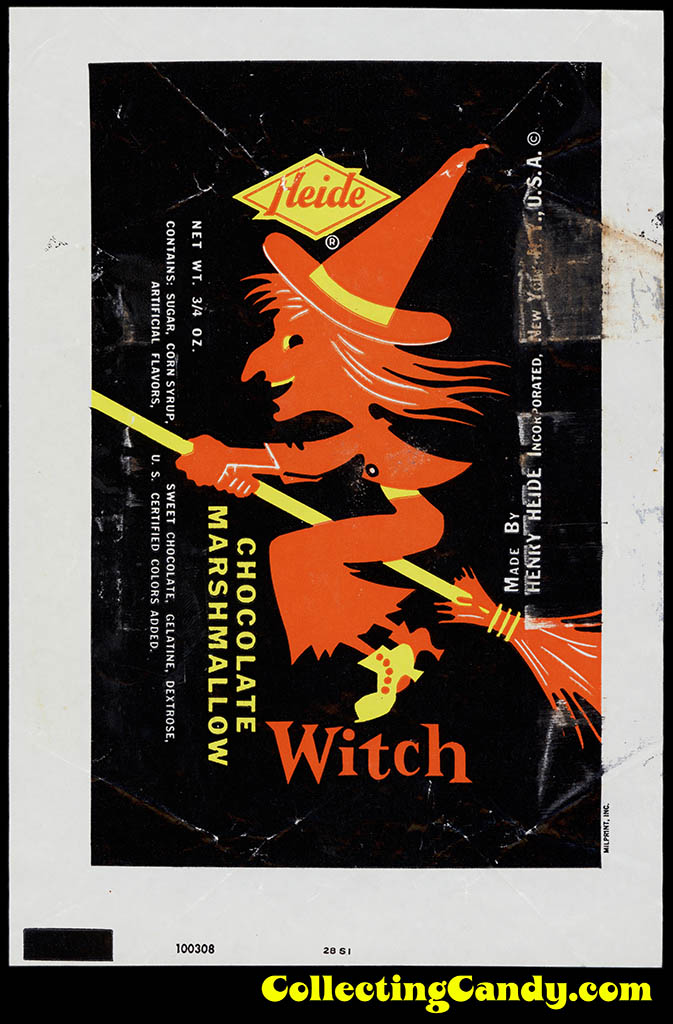 I’ve estimated the vintage of this wrapper to be from the 1950’s-1960’s era and while I’m confident that range is accurate, I cannot absolutely corroborate it, so it’s possible that it dates back even further.

Whatever the case, it’s a fantastic piece and I think it compares nicely to the gorgeous Brach’s Witch I published back in 2013:

Both of those wrappers are stunning Halloween classics and a testament to just how cool this vintage confectionery material can be.  To my eye, they are stellar examples of packaging from the past that transcend to become pop art.

For those that don’t already know, Heide was a major candy manufacturer throughout most of the 20th century, and while the company itself has not survived, the Heide brand name, as well as a couple of their most popular products, remain on store shelves – both distributed these days by the Ferrara Candy Company:  Jujyfruits and Jujubes.

Heide Jujyfruits from the 1970’s and today.

Heide Jujubes from the 1970’s and today.

So while today’s Chocolate Covered Witch wrapper stands a gorgeous relic from our confectionery past, the Heide name lives on to delight consumers in 2016 and beyond.

And that’s everything I’ve got on this fantastic Heide’s Halloween Witch wrapper.  See you next time!

A New York City based writer, editor and sometimes actor. After spending much of the 1990′s in the comic book business helping tell the stories of Marvel Comics’ X-Men as series editor, he has since split his time between developing his own entertainment properties while still consulting and working on others. Having been described as “the Indiana Jones of lost and forgotten candy”, Jason is one of the country’s premier candy collectors and historians with his discoveries appearing in countless blogs, magazines, newspaper articles, and books. Always happy to share his knowledge and unique perspectives on this colorful part of our popular culture, Jason has consulted with New York’s Museum of Food and Drink and has also been a featured guest on Food Network’s Heavyweights, France’s M6 Capital, and New York’s TheActionRoom.com. My Google Profile+
View all posts by Jason Liebig →
This entry was posted in 1950's, 1960's, Chocolate, CountdownToHalloween, Halloween, Holiday and tagged candy collecting, candy collection, candy collector, candy wrapper collection, candy wrapper collector, collectible, collecting candy, confectionery, confections, Halloween, Heide, mid-century, packaging, packaging design, sweets, vintage, vintage candy wrappers, witch, wrapper. Bookmark the permalink.