Three weeks ago, I presented an assortment of unopened chocolate bars from 1981.  As a candy collector, I originally acquired them with the desire to recover the packaging – not so much the decades-old chocolate inside. 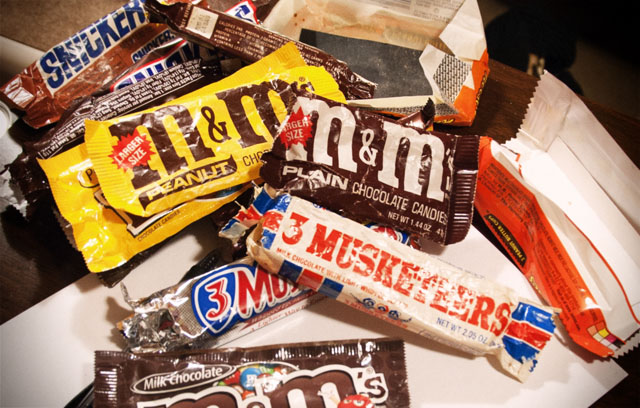 Opening those packages and comparing the old contents with current versions turned out to be a fun topic and today I want to show you the fully-recovered packaging.

Getting the bars out of the wrappers was only half of my recovery process.  Due to their age, getting these wrappers into a nice flat shape took time.  Using a number of tools including a butter knife, a detail cutting blade, and a Sharpie marker (capped) – I was able to carefully deconstruct the wrappers.  After that, I placed each wrapper between two sheets of plain white paper and allowed a few days of flattening inside old hardcover books.

Presented here are the wrappers as they now look.

I think these wrappers came out of the recovery process looking pretty good.  It’s not always easy getting a wrapper into a flattened-out shape, and not all collectors I know do this.  Some collectors prefer to keep the wrapper looking somewhat close to how they appear with the candy still inside.

At some point, I will photograph some of the unorthodox methods I’ve developed to recover wrappers from bars with minimal tearing.

To check out my original post documenting the opening of these bars, head over here.

A New York City based writer, editor and sometimes actor. After spending much of the 1990′s in the comic book business helping tell the stories of Marvel Comics’ X-Men as series editor, he has since split his time between developing his own entertainment properties while still consulting and working on others. Having been described as “the Indiana Jones of lost and forgotten candy”, Jason is one of the country’s premier candy collectors and historians with his discoveries appearing in countless blogs, magazines, newspaper articles, and books. Always happy to share his knowledge and unique perspectives on this colorful part of our popular culture, Jason has consulted with New York’s Museum of Food and Drink and has also been a featured guest on Food Network’s Heavyweights, France’s M6 Capital, and New York’s TheActionRoom.com. My Google Profile+
View all posts by Jason Liebig →
This entry was posted in 1980's, Chocolate, M&M's, Uncategorized. Bookmark the permalink.