Today marks the fourth anniversary since the February 6th, 2012 launch of CollectingCandy.com and as such I wanted to select four amazing (and previously unseen) pieces from my archives to share in order to mark the occasion.  Make the jump to check them out!

It’s hard to believe it’s been four years since I launched this website.  Much has happened in that short span of time; there have been ups and there have been downs.  Sometimes I have not been able to post as consistently as I might like.  Yet in spite of that fact, I’m proud to say that the four year journey of CollectingCandy.com has thus far resulted in nearly 600 posts, many of which brought together historical information and images that couldn’t be previously found anywhere else online.  And that has always been so much of what my goal was and is for this site; to create a place where this history is preserved, understood, and enjoyed by anyone who might be curious to visit it.

My passion for this material has only grown over the last four years and while I don’t always show up here with a new post, I am working behind the scenes on this every day.

Among other things, I’m constantly seeking out unique and unusual material to help build the historical narrative of candy history that I’ve set out to document here.  Finding and sharing things that have never been seen before (online, at least) is one of my favorite parts about producing this blog.  It’s tremendous fun and today I’m excited to share four unique pieces you won’t find anywhere else; one for each year that CollectingCandy.com has been online.  So let’s get to it.

First up is a relatively recent acquisition as it only came into my collection last month.  It’s a bar wrapper that dates back to 1969 for a product called Nutty Crunch.  Before it joined my collection, I’d honestly never heard of it.  This one hails from Nabisco’s candy division and during a time when they were putting out some amazingly well-designed wrappers – it’s a beauty!  So without further ado – here is Nabisco’s Nutty Crunch wrapper: 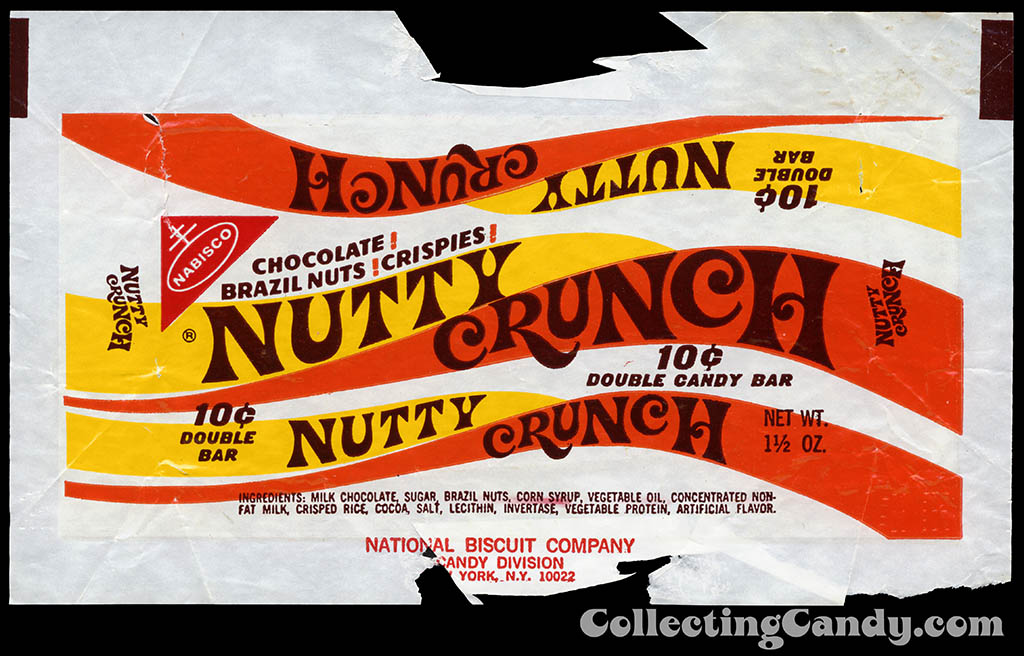 I wish I knew who was working on the design team at Nabisco during this era, because they deserve to be recognized.  The design work is easily some of the best I’ve ever seen and this Nutty Crunch wrapper has immediately become a favorite.  During this same period, Nabisco also released one of my previous all-time favorite wrappers for a bar called The Wild One – which I first covered in January of last year.  It seems pretty clear that the Nabisco Candy Division was on fire in 1969!

Next up is a piece from the recent past – in fact it stands out within today’s post as it is one that arrived on shelves during the four years that this site has been active.  And yet, in spite of that recent vintage, you won’t find images of this next piece anywhere else online.

What I have to show you now is the box for a special edition of Wonka Nerds known as “White-Out Nerds”.   White-Out Nerds were produced in 2012 as part of the #NerdsUnite anti-bullying campaign and were released as a free giveaway, only available for one day (June 5th) and only at Circle K locations across the United States.  They are “White-Out” because the Nerds candy pieces themselves were all white, or colorless.  I can’t say for certain why there are no other images of this box out there as it is so recent, but since there aren’t, let me be the first to unveil it here and now: 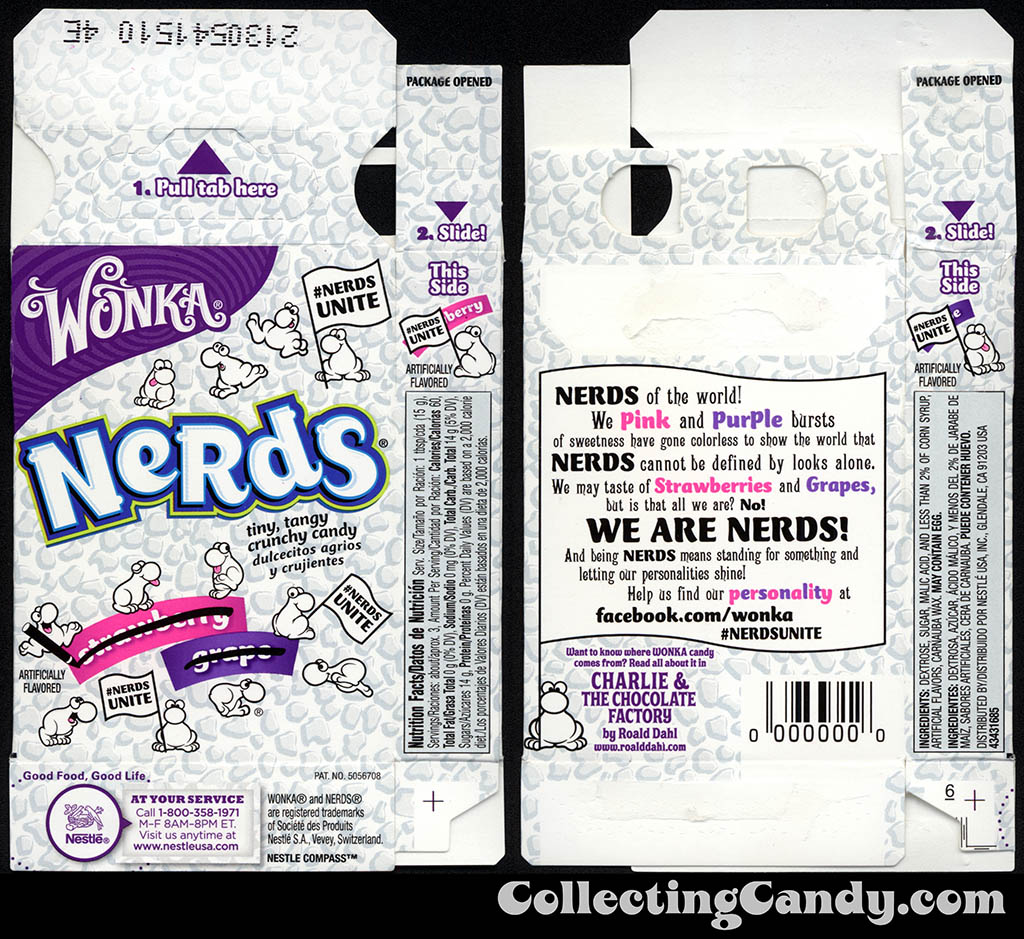 In the interest of full disclosure, in putting today’s post together I did find another image of this box (at the 11th hour), but it’s barely visible.  It is included in the PR photo for the campaign featuring actor Wilmer Valderrama: 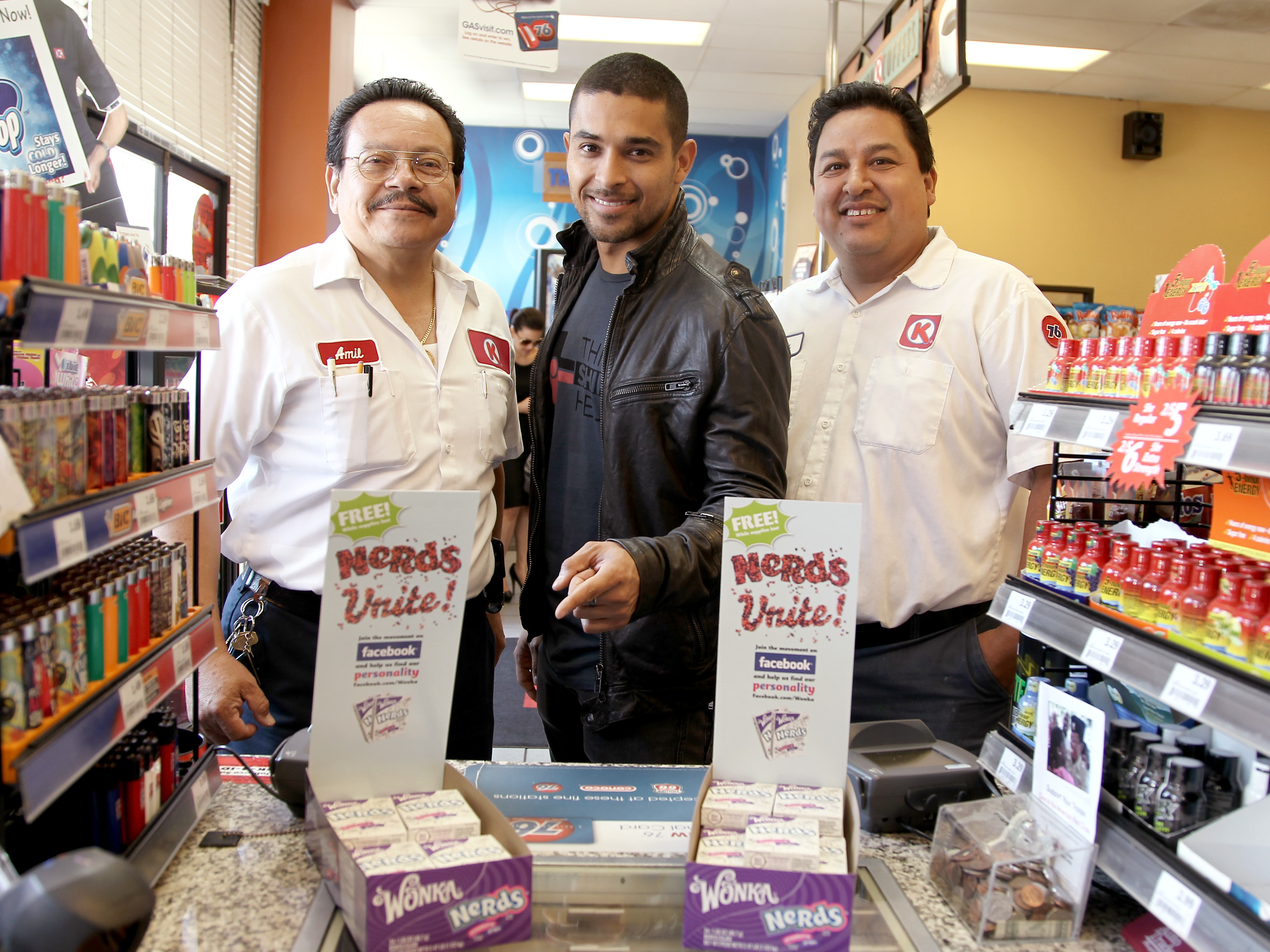 The third piece I’d like to share today is something that absolutely blew my mind when I first saw it.  In fact it still does.

Over time, and after thousands of hours of looking back over the history of most major candy brands, I’ve come to have a pretty good understanding of what existed and what was made.  So even if I haven’t come across a certain piece or images of it, I feel pretty good about knowing that it was out there.  But even after all of that, this next piece I have to show you was a total surprise and a delightful shock – here is a box for Willy Wonka’s Monster Beans, from 1981: 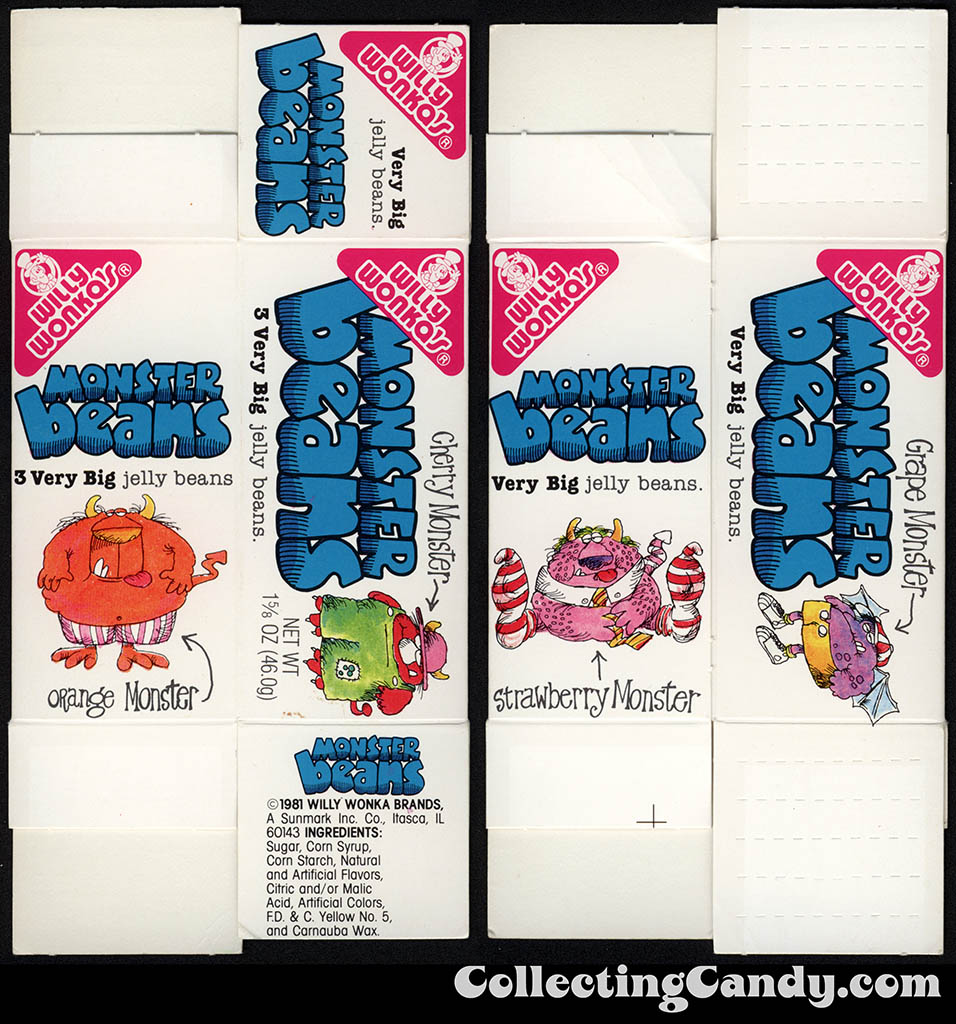 I absolutely love this Willy Wonka Monster Beans box.  Based on the style, I believe the cool monster artwork was illustrated by one of my all-time faves, Jared Lee.  Mr. Lee is the artist responsible for the classic “Bummers” feature from Scholastic’s 1970’s and 1980’s Dynamite Magazine.

Not a complete stranger to the confectionery world, Jared Lee also illustrated some of the promotional materials for Warner-Lamber’s Crack-Ups gum not to mention my all-time favorite Happy Meal box.

I cannot say for certain if Willy Wonka’s Monster Beans was actually ever available at retail.  You see, this box came to me from the personal files of a former graphic designer for the company, and as such it may have only ever been used for presentation or possibly a limited test market (this example also doesn’t include a bar code, adding to the likelihood of a non-retail existence).  And that may explain why the only place you may ever see Willy Wonka’s Monster Beans mentioned is right here on this site.  I don’t know for sure, but for now I’m thrilled to finally share it here.

The final offering in today’s four-for-our-fourth quartet is a wrapper from Tootsie for a product called Tootsie Sours.   And just like with Nabisco’s Nutty Crunch, the first time I’d ever heard of this product was when I saw the wrapper.  Here it is: 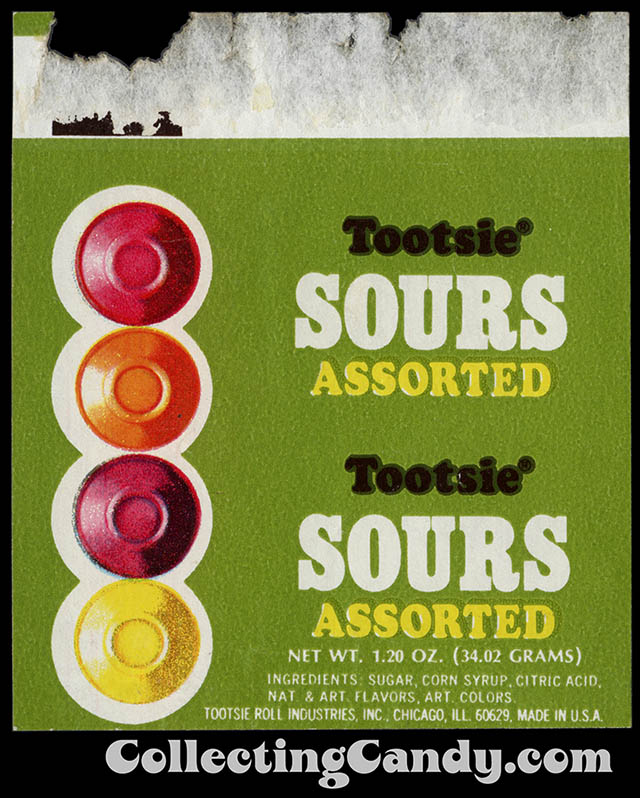 Although I’d never heard of Tootsie Sours before, the one thing that struck me was how the illustration on the wrapper of the candy pieces looked remarkably similar to another Tootsie classic, Tootsie Pop Drops. 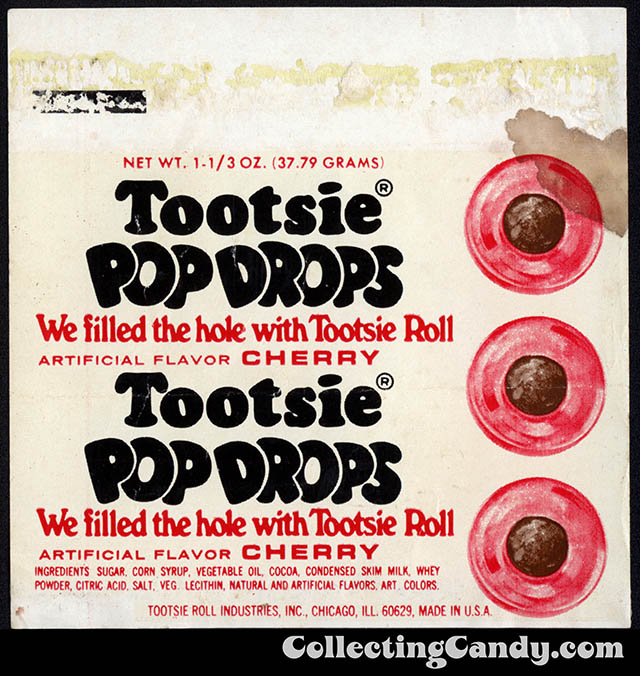 I’ve had that Tootsie Sours wrapper in my archives for a few years now, and when putting today’s post together I discovered that just nine months ago another wonderful reference to it had been posted online by none other than Tootsie Roll Industries themselves.  Over on YouTube on Tootsie’s official account, they posted a pair of awesome vintage TV commercials for the product featuring a pair of great product images: 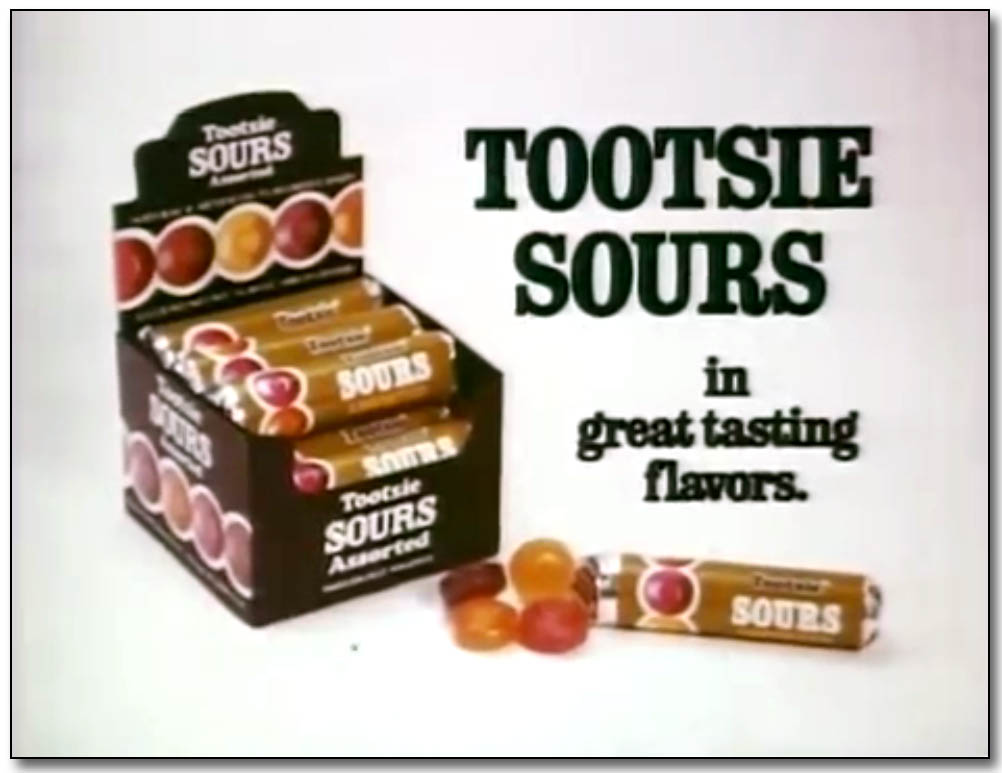 Here’s a shorter version of the same featuring a different close-out photo:

Fun stuff, and now those TV spots represent wonderful additional pieces to the confectionery historical puzzle.  It’s great to see them and I’m glad that Tootsie Roll Industries shared them with the public.

With that fourth previously-never-seen piece shared, my 4th Anniversary show-and-tell post is concluded.   I hope you enjoyed it and I hope you have enjoyed the past four years of my endeavoring to bring clarity and fun to the scattered and hazy history of candy, here on CollectingCandy.com.  It has been a great thrill to be able to do so, and I plan to continue for many many years to come.  This is just the beginning, so thanks for stopping by and I’ll see you next time! 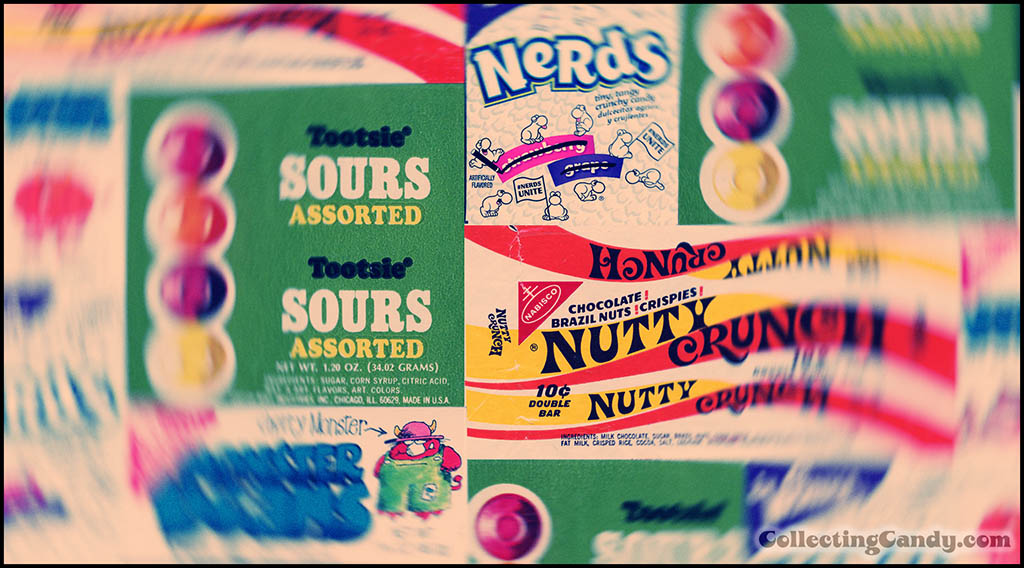 A New York City based writer, editor and sometimes actor. After spending much of the 1990′s in the comic book business helping tell the stories of Marvel Comics’ X-Men as series editor, he has since split his time between developing his own entertainment properties while still consulting and working on others. Having been described as “the Indiana Jones of lost and forgotten candy”, Jason is one of the country’s premier candy collectors and historians with his discoveries appearing in countless blogs, magazines, newspaper articles, and books. Always happy to share his knowledge and unique perspectives on this colorful part of our popular culture, Jason has consulted with New York’s Museum of Food and Drink and has also been a featured guest on Food Network’s Heavyweights, France’s M6 Capital, and New York’s TheActionRoom.com. My Google Profile+
View all posts by Jason Liebig →
This entry was posted in 1960's, 1970's, 1980's, Boxed, Chocolate, Nestle, Sour Candy, Uncategorized, Wonka and tagged candy collecting, candy collection, candy collector, candy wrapper collection, candy wrapper collector, collectible, collecting candy, confectionery, confections, packaging, packaging design, sweets, vintage candy wrappers, wrapper. Bookmark the permalink.