One of the candy brands that tends to always provide specialty seasonal releases is Topps/Bazooka’s Ring Pop.  This year is no different, with the added bonus of an entirely new look for their Halloween Ring Pop big multi-bag packages.  Make the jump to check it out!

I’ve been closely following the Ring Pop brand’s seasonal releases for several years now and even covered the introduction Halloween Ring Pop Minis back in 2013.  I’ve  enjoyed the effort Topps has put into the packaging and being a fan of the classic monsters, its been great to have Frankenstein’s monster gracing the multi-boxes and packages the last several years. 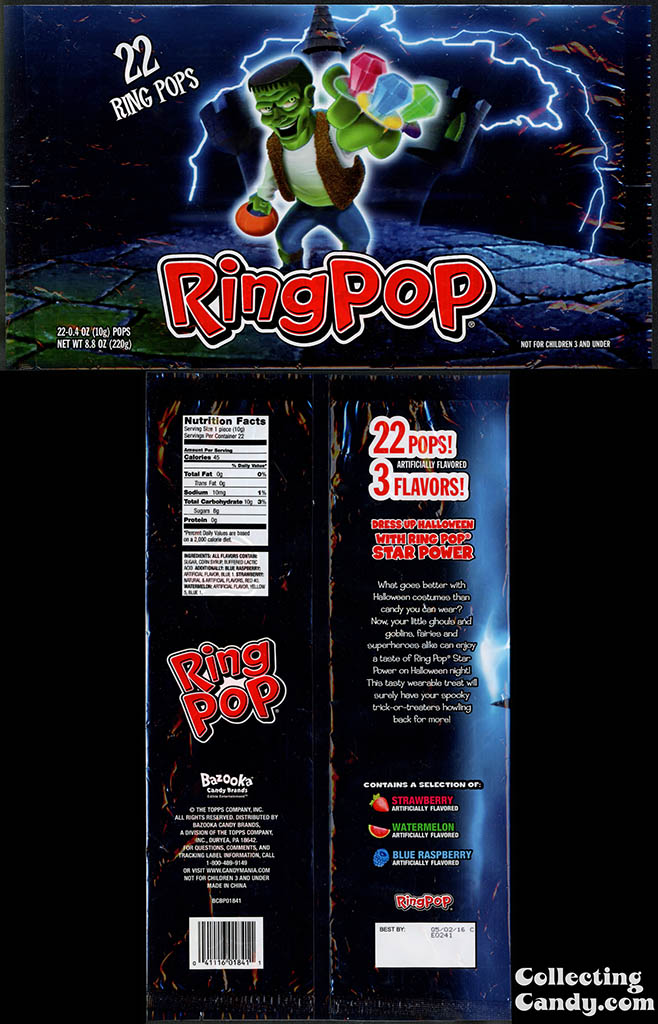 With the introduction of Ring Pop Gummies back in 2013, even they were brought into the Halloween fold with a cool multi-bag featuring a Mummy mascot character: 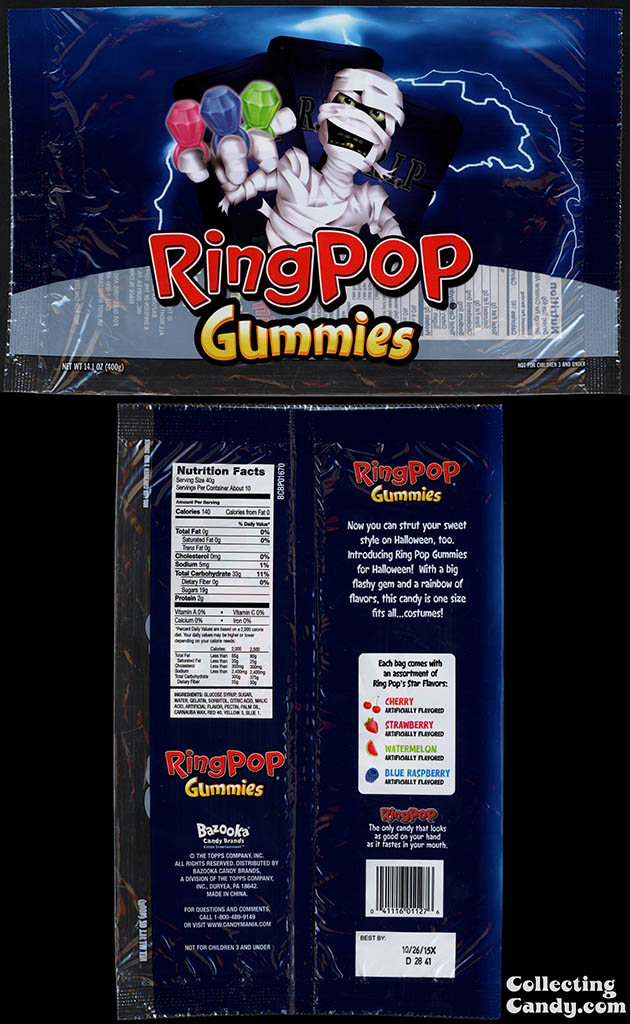 For 2015, Topps appears to have retired Frankenstien’s monster and now replaced him with a colorful vampire mascot.  Check it out: 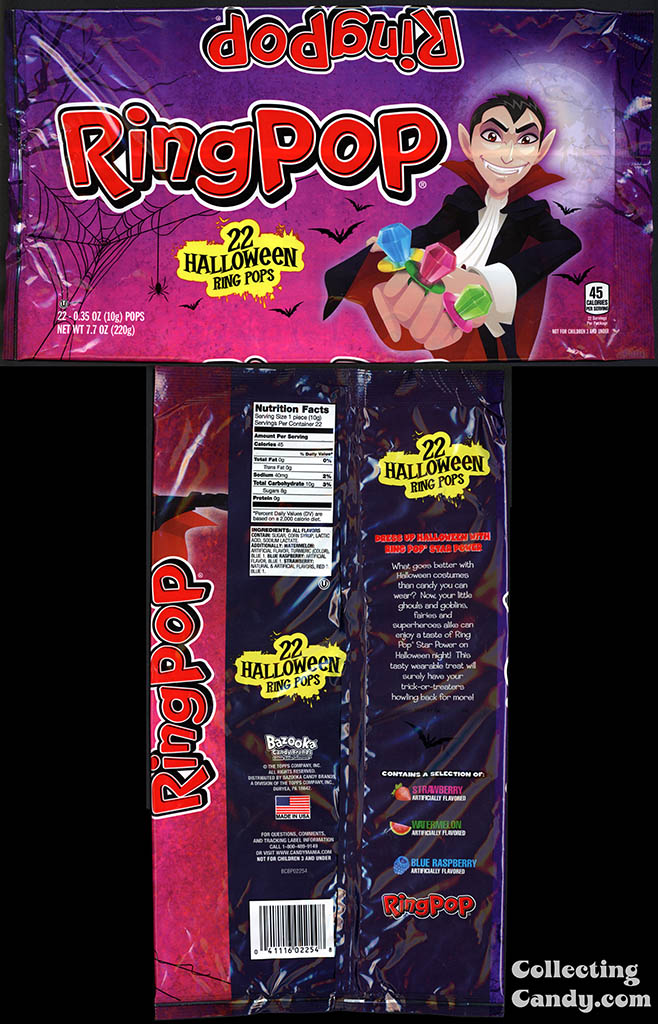 I had assumed that the only change on the seasonal release was the packaging, but as I was putting today’s post together I noticed something odd:  that the Halloween Ring Pop 22-pack multi-bag has gone from 8.8 ounces in 2014 to 7.7 ounces this year.  Yet the total grams have remained 220g from those same two years.  I’m guessing that since 7.7 ounces is much closer to 220 grams that 8.8 ounces is, that the 2014 packaging net weight was a mistake.  Here’s a comparison image showing the new design from this year along with the previous:

So for 2015, Halloween Ring Pops have gotten a new mascot and they’ve possibly dropped in size a tiny amount – though more than likely, they have stayed the same size and simply fixed a previous error.  I wonder if that error prompted the art change as well?   And as for Ring Pop Gummies?  Well, I didn’t find any Halloween edition Ring Pop Gummies at retail this season so I’m not sure what that means.  Maybe they didn’t prove popular enough so they are here and gone in two short years.

For now, that’s everything I’ve got to share on the new 2015 design for Halloween Ring Pops packaging design.  Have a save and happy Halloween today, and I’ll see you next time! 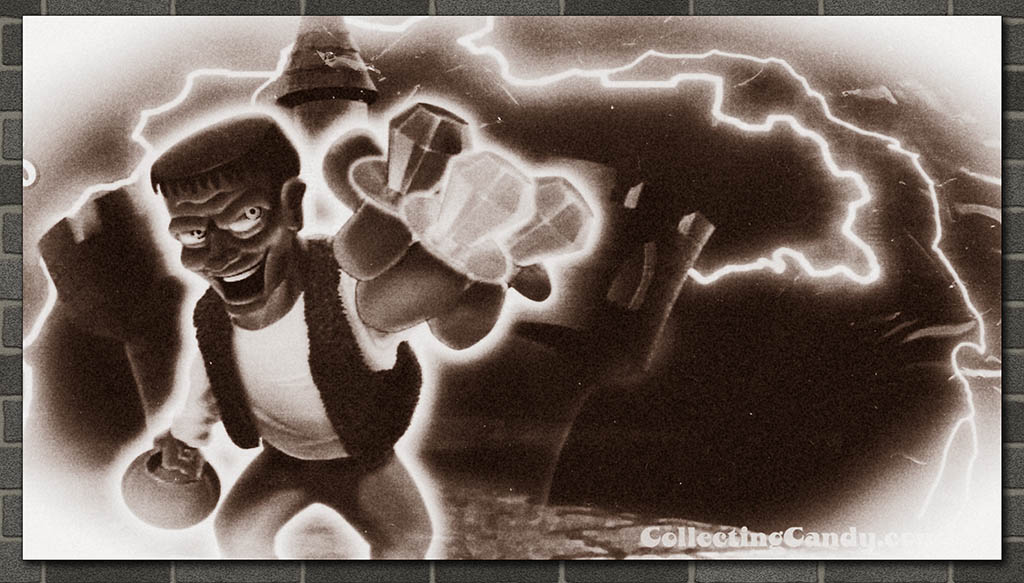 A New York City based writer, editor and sometimes actor. After spending much of the 1990′s in the comic book business helping tell the stories of Marvel Comics’ X-Men as series editor, he has since split his time between developing his own entertainment properties while still consulting and working on others. Having been described as “the Indiana Jones of lost and forgotten candy”, Jason is one of the country’s premier candy collectors and historians with his discoveries appearing in countless blogs, magazines, newspaper articles, and books. Always happy to share his knowledge and unique perspectives on this colorful part of our popular culture, Jason has consulted with New York’s Museum of Food and Drink and has also been a featured guest on Food Network’s Heavyweights, France’s M6 Capital, and New York’s TheActionRoom.com. My Google Profile+
View all posts by Jason Liebig →
This entry was posted in CountdownToHalloween, Gummies, Halloween, Novelty, Topps and tagged candy collecting, candy collection, candy collector, candy wrapper collection, candy wrapper collector, collectible, collecting candy, confectionery, confections, Dracula, Frankenstein, Halloween, mascot, monster, packaging, packaging design, Ring Pop, Ring Pops, sweets, vampire, vintage candy wrappers, wrapper. Bookmark the permalink.