Sweetarts have been a Halloween staple since the 1960’s and at least as early as the 1990’s the brand has delivered a special seasonal Skulls & Bones edition.  Make the jump to see how they looked then and how they look today!

I’m not exactly sure when Sweetarts Skulls ‘n Bones were first introduced but my earliest evidence of them dates back to the 1990’s and this promotional sales sheet: 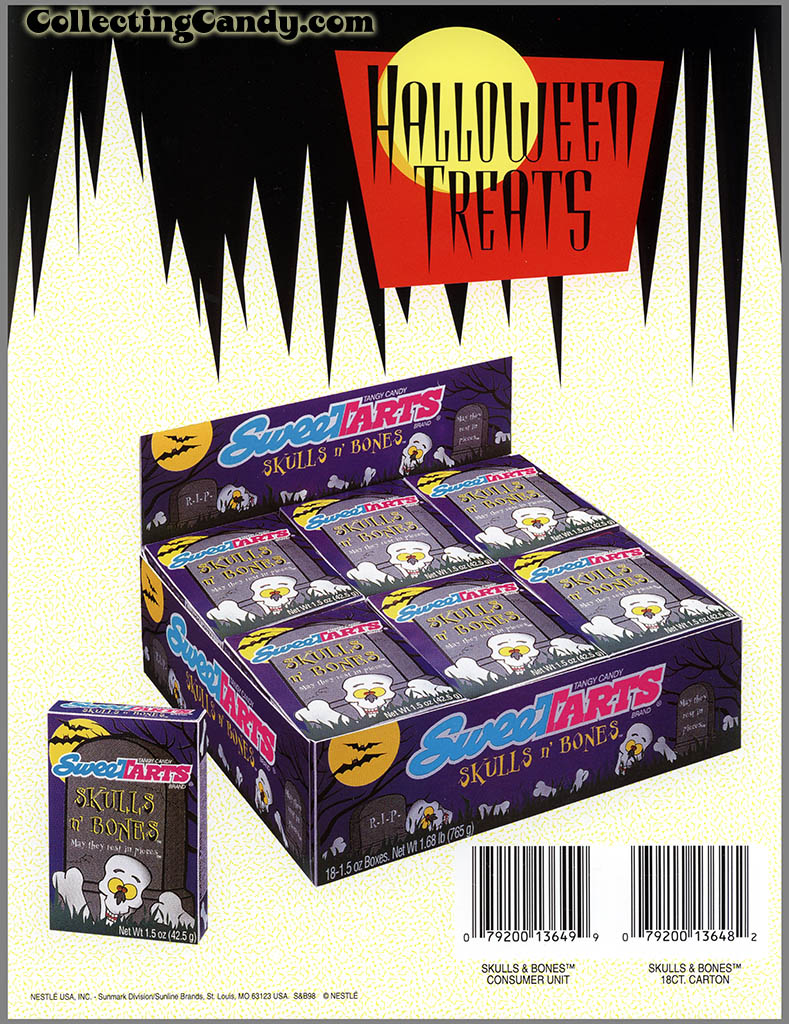 Back then, Sweetarts Skulls ‘n Bones were sold in small individual boxes with an illustrated cartoon skeleton character – pretty awesome packaging if you ask me, and one I’d love to eventually add to my collection.

In the years since that time, the brand moved away from retail-sized boxes and instead opted for a multi-pack bagged approach – something geared more toward trick-or-treat giveaways.  This is the packaging from the last few years, a design which largely followed the all-year-round Sweetarts packaging look and color scheme: 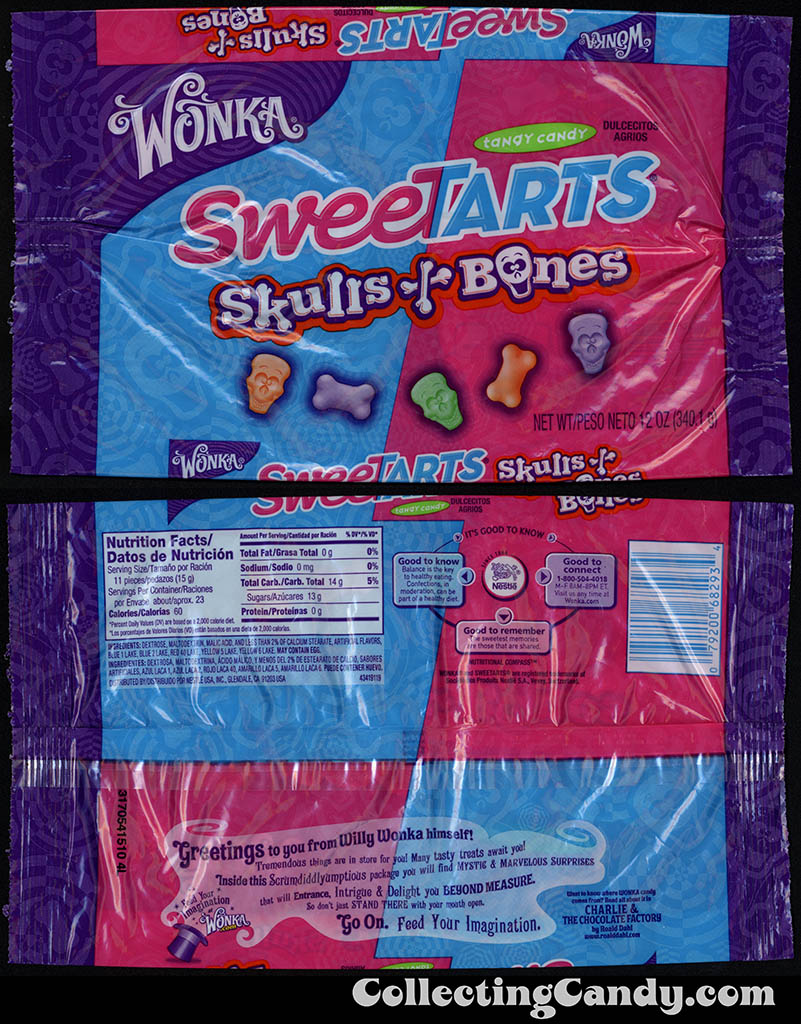 [Note: The goofy skull-face character from the original 1990’s Skulls n’ Bones box is retained within the packaging artwork and logo of the modern packaging.]

This year, Nestle has really mixed it up, opting to imbue some of their Halloween packaging with a look I’m describing as “inspired by Day-of-the-Dead holiday artwork”.  It’s pretty cool: 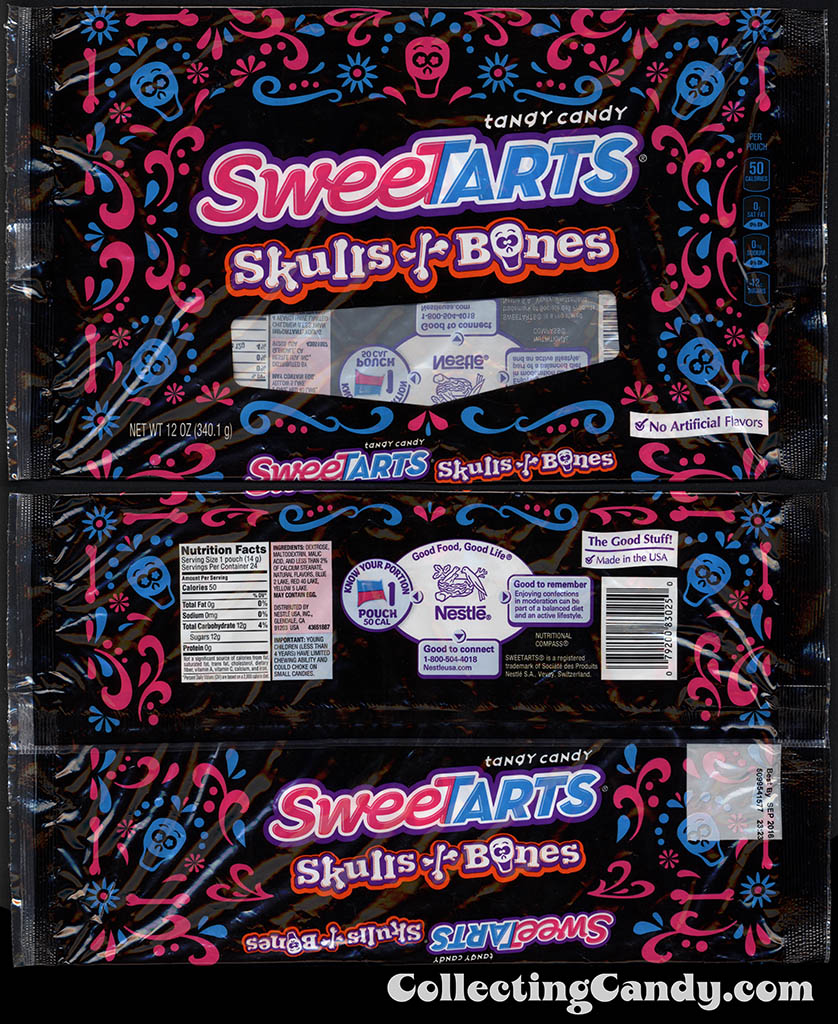 Here’s one of the individual packs contained in the larger bag.  You’ll note that this inner package retains a more classic Sweetarts package look: 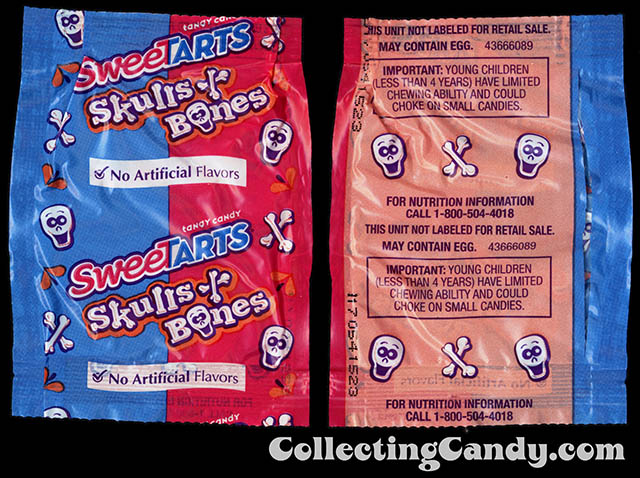 Beyond Skulls and Bones, I have another cool 1990’s Halloween Sweetarts sales flyer to share, this one showcasing a glow-in-the-dark Halloween bucket filled with classic Sweetarts 2-packs: 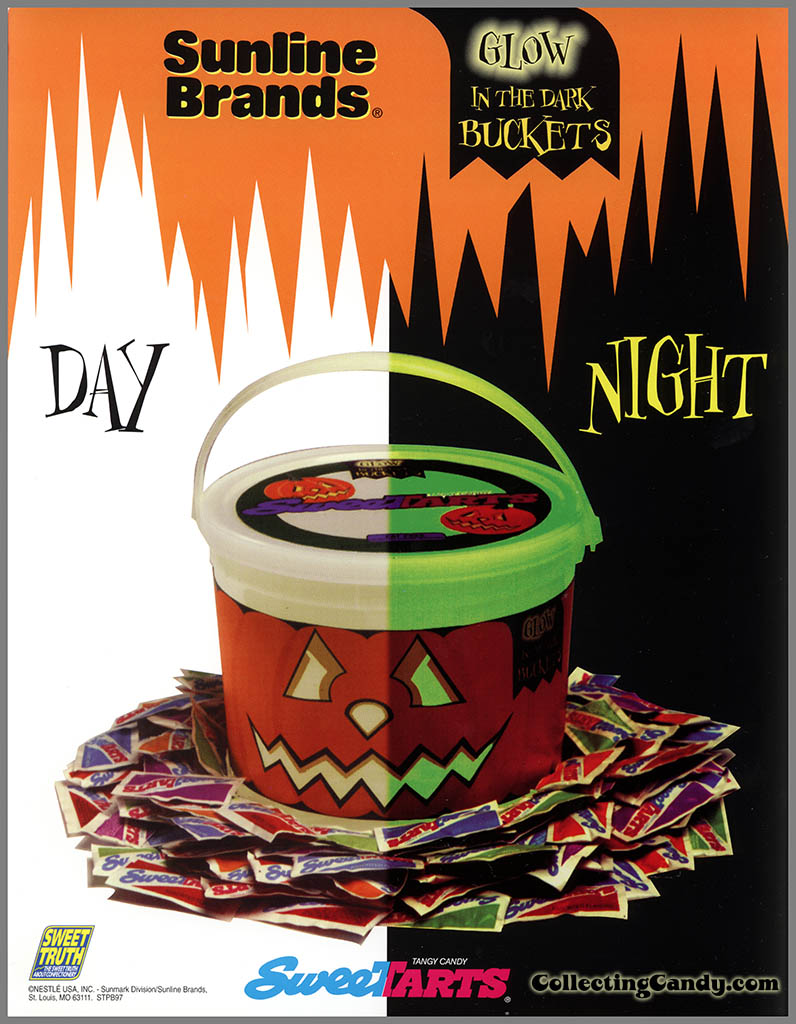 If you look closely, you can see the classic paper Sweetarts 2-pack packages.  Those two-packs have been around forever and I’m happy to show you a few examples of them that might date back all the way to the 1960’s.

It’s safe-to-say that kids have been receiving these classics in their trick-or-treat bags on Halloween for decades:

And that’s everything I’ve got to share on the then-and-now of Halloween’s Sweetarts Skulls ‘n Bones.  See you next time!

A New York City based writer, editor and sometimes actor. After spending much of the 1990′s in the comic book business helping tell the stories of Marvel Comics’ X-Men as series editor, he has since split his time between developing his own entertainment properties while still consulting and working on others. Having been described as “the Indiana Jones of lost and forgotten candy”, Jason is one of the country’s premier candy collectors and historians with his discoveries appearing in countless blogs, magazines, newspaper articles, and books. Always happy to share his knowledge and unique perspectives on this colorful part of our popular culture, Jason has consulted with New York’s Museum of Food and Drink and has also been a featured guest on Food Network’s Heavyweights, France’s M6 Capital, and New York’s TheActionRoom.com. My Google Profile+
View all posts by Jason Liebig →
This entry was posted in 1960's, 1970's, 1990's, CountdownToHalloween, Halloween, Holiday, Nestle, Wonka and tagged candy collecting, candy collection, candy collector, candy wrapper collection, candy wrapper collector, collectible, collecting candy, confectionery, confections, Halloween, Halloween candy, packaging, packaging design, Sweetarts, sweets, vintage candy wrappers, vintage Sweetarts, wrapper. Bookmark the permalink.