Kicking off our Countdown To Halloween with Zombie Mouth Bubblegum!

Today kicks off our official Countdown to Halloween coverage for 2015, and we’ve got a lot to show you this year.  It should be noted that this first seasonal post is a different kind of entry for CollectingCandy.com as, rather than delving into the topic of a classic confectionery treat or a current Halloween item, we’re going to discuss a potential new spooky treat that we conceived of ourselves and hope to launch through the Kickstarter crowdfunding community: Zombie Mouth Bubblegum!

I’ve already been sharing the news of Zombie Mouth Bubblegum on Facebook, Twitter and Instagram but if this is your first time hearing about it, it bears some explanation and a bit of background.

Over the last decade or so, and especially since launching this site back in 2012, I’ve been delving into and celebrating the histories of confection, confectionery packaging, branding and marketing, and in some cases the people behind those things.  I’ve also been keeping up with the current changes and developments in those worlds.

My research on those fronts have provided new appreciation for and understanding of what goes into creating candy and bubblegum products.  But I also have a background in the comic book creating business, a world which has also evolved and grown in wonderful ways, helping birth a movement often referred to as “the geek culture”.

A few years ago I wondered if someone might ever try to merge the worlds of candy and geek culture together, yet no one really has.  So after some thoughtful consideration I decided to take a crack at it myself.  Drawing from everything I’ve learned these past years along with my childhood experience with a Star Wars Darth Vader cake that featured black-dyed frosting (and the fun that ensued from consuming it), the earliest genesis of “Zombie Mouth” was defined.

And after two years of developing the concept, a Kickstarter campaign to raise the money to make Zombie Mouth Bubblegum a reality was born.

Though we’ve partnered with established players to eventually manufacture our product and packaging (creating a bubblegum factory would have cost many millions of dollars), the goal to independently create and fund our limited run of Zombie Mouth Bubblegum remains an ambitious and historically unprecedented one. 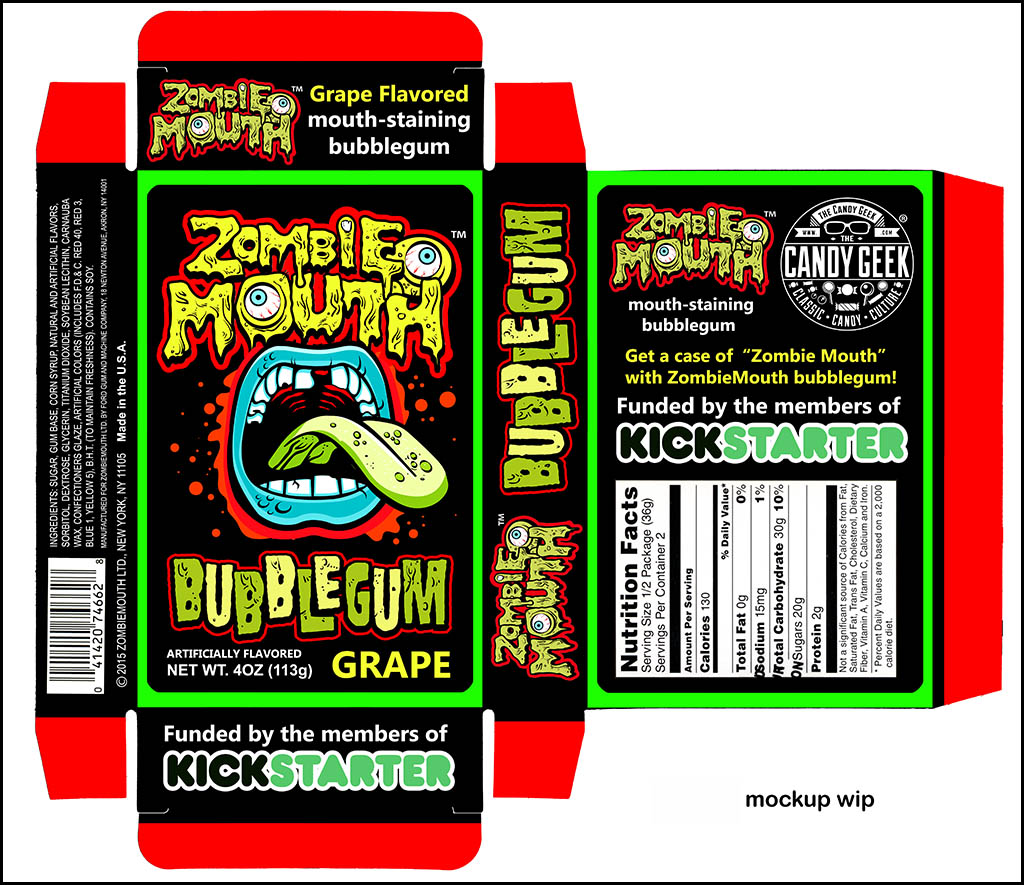 But as we get to sharing the established Halloween treats currently on store shelves and the nostalgic tidbits of our Halloween candy past, we hope you can show your support and spread the word of this unprecedented new spooky offering (and forgive us for our shameless plugging of it.)  Because with your help, Zombie Mouth Bubblegum will become a reality!

Check it out and show your support for the first-ever Kickstarter campaign for a new bubblegum: Zombie Mouth!

A New York City based writer, editor and sometimes actor. After spending much of the 1990′s in the comic book business helping tell the stories of Marvel Comics’ X-Men as series editor, he has since split his time between developing his own entertainment properties while still consulting and working on others. Having been described as “the Indiana Jones of lost and forgotten candy”, Jason is one of the country’s premier candy collectors and historians with his discoveries appearing in countless blogs, magazines, newspaper articles, and books. Always happy to share his knowledge and unique perspectives on this colorful part of our popular culture, Jason has consulted with New York’s Museum of Food and Drink and has also been a featured guest on Food Network’s Heavyweights, France’s M6 Capital, and New York’s TheActionRoom.com. My Google Profile+
View all posts by Jason Liebig →
This entry was posted in Boxed, Bubble Gum, CountdownToHalloween, Gum, Halloween and tagged candy, candy collecting, candy collection, candy collector, candy wrapper collection, candy wrapper collector, collectible, collecting candy, ComicCon, confectionery, confections, Cosplay, Darth Vader, Halloween, packaging, packaging design, Star Wars, sweets, TheWalkingDead, vintage candy wrappers, wrapper, Zombie Apocalypse, zombies. Bookmark the permalink.