Annabelle’s “Sir” bar is one that has long fascinated me, partly because I loved the logo for it and I had never come across a wrapper for one, as well as the fact that I didn’t really know much about the thing.   I’m happy to report that I recently was able to add an Annabelle’s Sir bar wrapper to my collection and upon doing so, followed that up with a good bit of research that has allowed me to paint a picture of the life of this bar.  Make the jump to check it out.

I came to know about the Sir bar as it would eventually become, as a product of the Annabelle Candy Company.   But it didn’t start out that way.  The Sir bar was originally launched in 1967 by the Golden Nugget company, which was owned at the time by the P. Lorillard company – a tobacco firm.  Lorillard acquired Golden Nugget in 1965, along with Reeds, the following year: 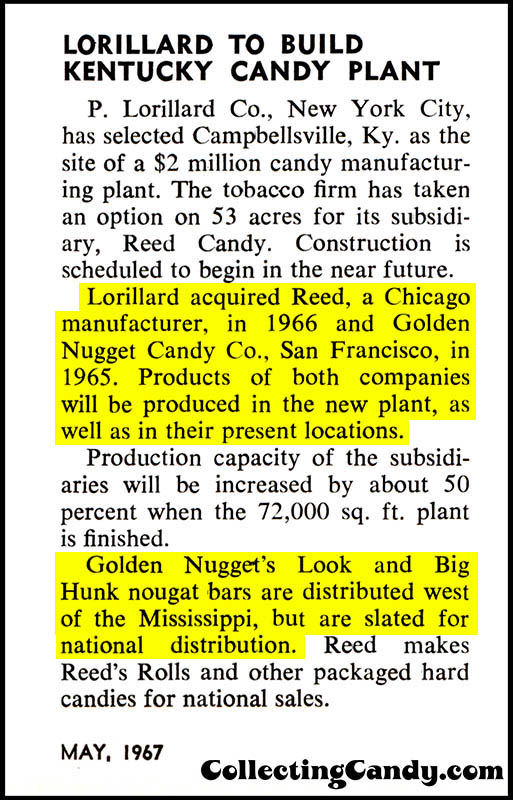 Golden Nugget was already well-known for their Big Hunk and Look bars when, in December of 1967 the candy trade was informed of their newest offering, the Sir bar. 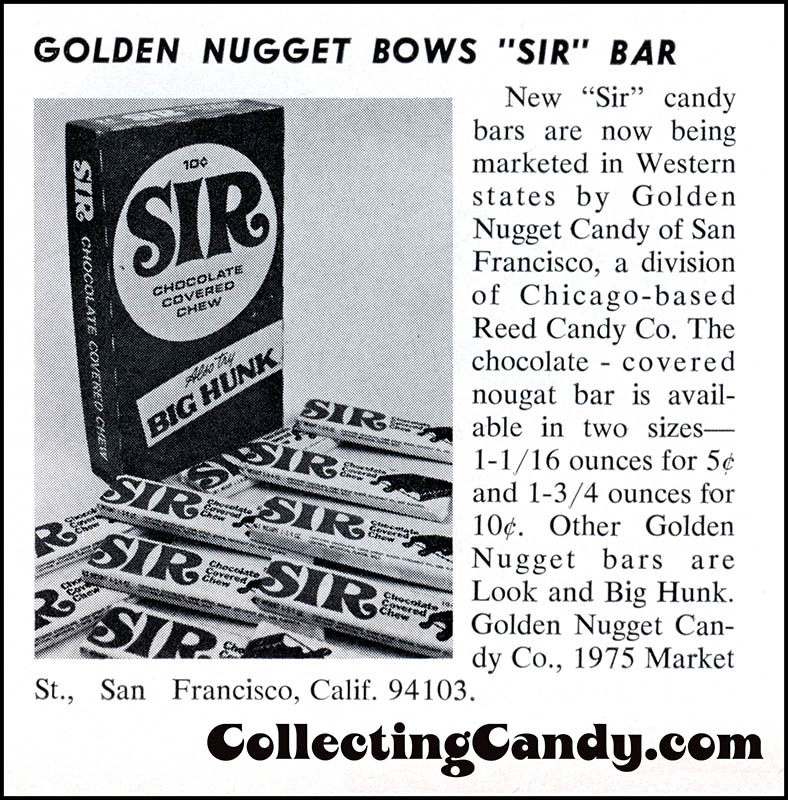 Golden Nugget’s Sir bar was launched as a West Coast regional item, but by late 1968 the East Coast was added to its distribution plan thanks to a new Kentucky factory: 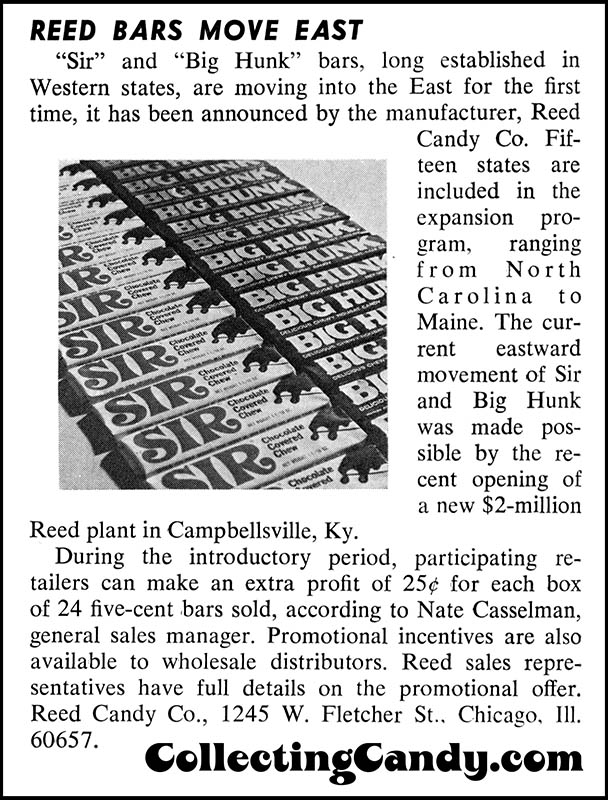 The next major change for Sir came in 1972 when the Annabelle Candy Company came calling and acquired the brands of Golden Nugget – a move announced in the following trade ad: 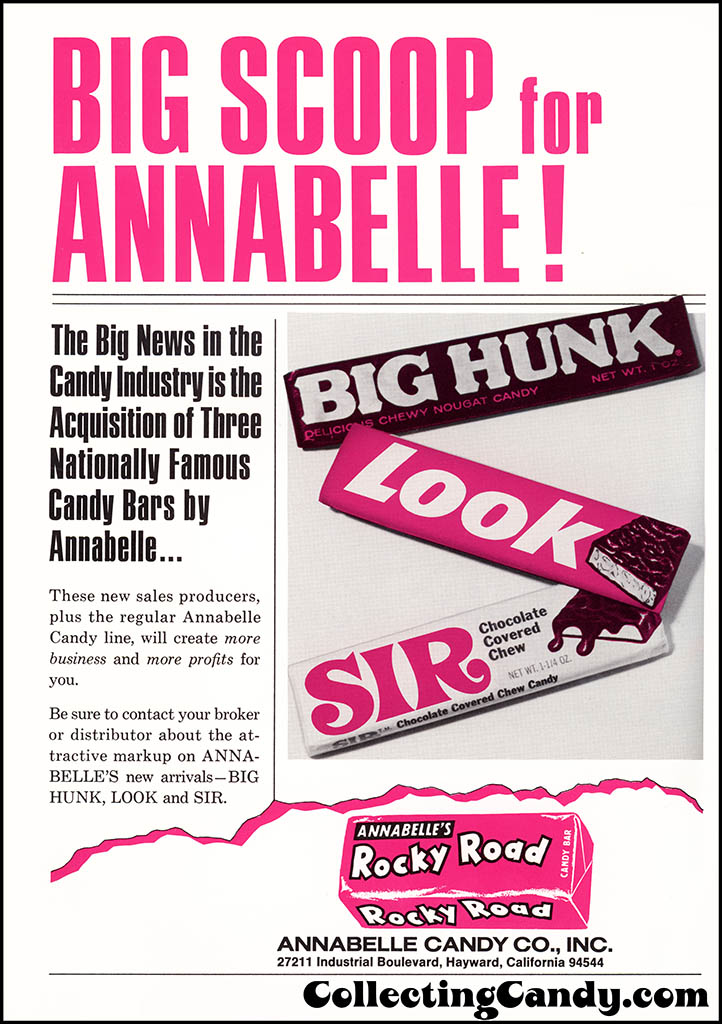 So five years into its young life, the Sir bar became a part of Annabelle’s candy lineup.

From that point, I believe the Sir bar was a steady-enough seller and as far as I know the wrapper design was never changed in any major way.  I have an example from 1979 and as you’ll see, it looks largely as it did during its 1967 launch.  Here it is: 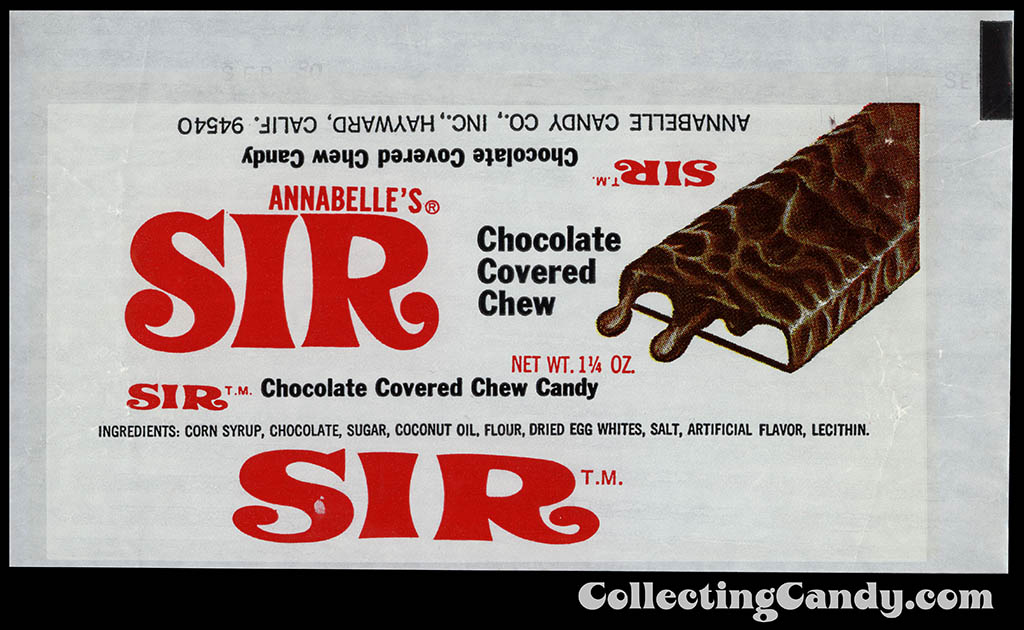 So that’s the Annabelle’s Sir bar.  I don’t know for certain how much longer it remained on-sale but based on my anecdotal findings, I’d estimate the the Sir bar was discontinued by the early 1980’s.

I think the Sir bar presents us with a great bit of candy logo/packaging design and another forgotten classic I’m thrilled to finally be able to present here on the site.  I believe today’s post represents the very first time the Sir bar has been shown anywhere online, which is pretty exciting.  I hope you’ve enjoyed seeing it and learning a bit of the Sir bar’s history.

I’ll see you next time!

A New York City based writer, editor and sometimes actor. After spending much of the 1990′s in the comic book business helping tell the stories of Marvel Comics’ X-Men as series editor, he has since split his time between developing his own entertainment properties while still consulting and working on others. Having been described as “the Indiana Jones of lost and forgotten candy”, Jason is one of the country’s premier candy collectors and historians with his discoveries appearing in countless blogs, magazines, newspaper articles, and books. Always happy to share his knowledge and unique perspectives on this colorful part of our popular culture, Jason has consulted with New York’s Museum of Food and Drink and has also been a featured guest on Food Network’s Heavyweights, France’s M6 Capital, and New York’s TheActionRoom.com. My Google Profile+
View all posts by Jason Liebig →
This entry was posted in 1960's, 1970's, Chocolate and tagged 1960's, California, candy collecting, candy collection, candy collector, candy wrapper collection, candy wrapper collector, collectible, collecting candy, confectionery, confections, logo design, packaging, packaging design, regional, San Francisco, sweets, vintage candy wrappers, West Coast, wrapper. Bookmark the permalink.