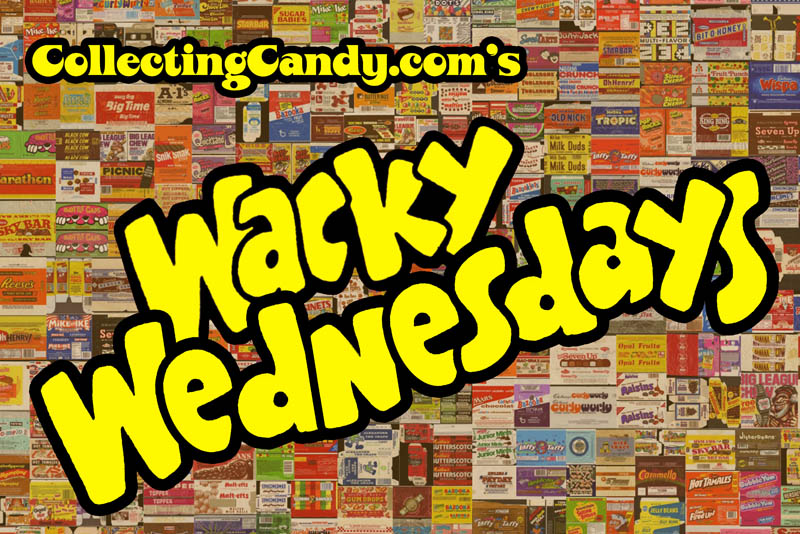 Long before I started collecting candy, I was collecting and sticking Wacky Packages.  But my love of both originated at the same time; during my early childhood in the 1970’s.

For those that might not know, Wacky Packages are packaging parody stickers, whose targets are exclusively consumer-purchased products.  Wacky Packages were a huge phenomenon in the early 70’s, having even outsold baseball cards for a time –  an unprecedented feat where non-sport cards were concerned.

I loved Wackys, and much to the chagrin of my mother, my older brother Jeff and I pasted our childhood closet door with them.  Later, when we had to find a way to remove those stickers, it would be to our chagrin, but that’s another story. 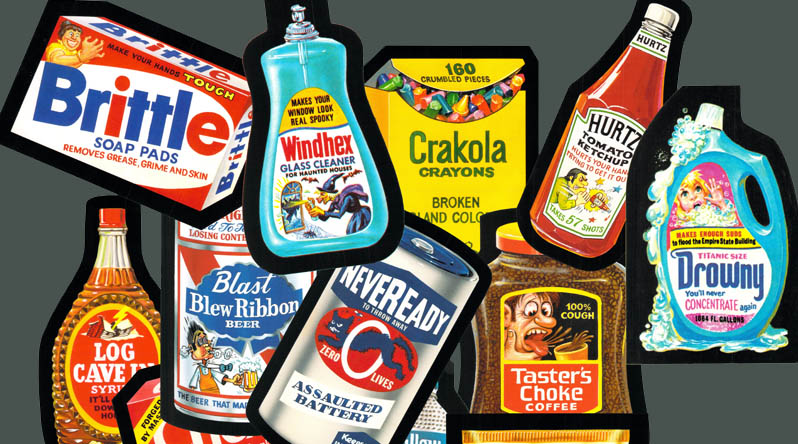 A big seller in the 70’s with minor revivals in the 80’s and 90’s, it would not be until the 2000’s when Wackys would experience a full-blown Renaissance.  Launching Wacky Packages “All-New Series” in 2004, they have since released seven more All-New Series, as well as two series of “Wacky Flashbacks”, multiple series of successful postcards, and finally the wonderful Wacky Packages “Old School”, having just launched a third series two weeks ago.   Beyond the stickers themselves there have been countless licensed items that have tapped into the retro-nostalgia market for the brand.

As a candy collector, I’ve enjoyed tracking down the original candy packages that Wacky Packages are based on.   So, if a Wacky Package released in 1974 parodied Sugar Babies, I will try to find a 1974 Sugar Babies pack to match.  It’s a challenge, but it’s rewarding and I like putting the original packaging context to the stickers.

With that in mind, today I’m launching a new feature here on CollectingCandy.com: Wacky Wednesdays.  Each week, I’ll be presenting a Wacky Packages sticker and the piece of original candy packaging that it parodies.

I’ll also be sharing my tales of consulting for the Wacky Packages Old School series.  [I have often helped the folks behind Old School zero in on the proper era of 1970’s packaging to work from.]  I think it’s going to be a fun weekly feature, and I’m looking forward to sharing it with you. 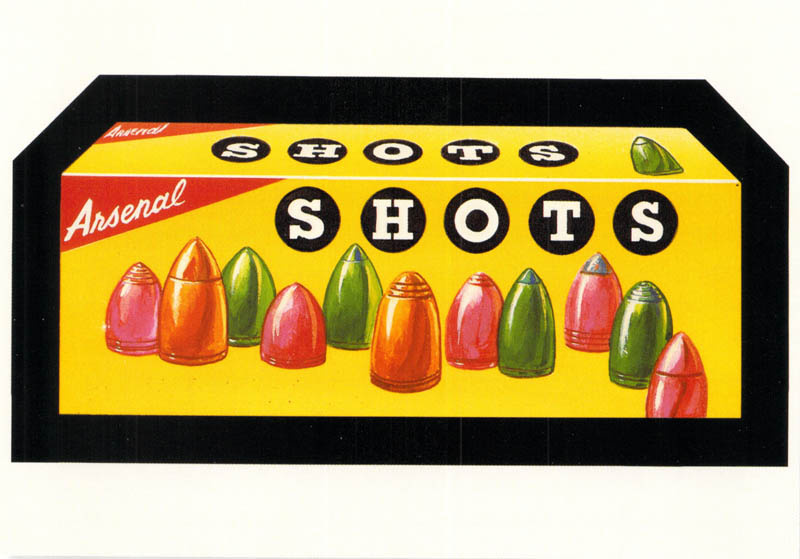 Here’s the Dots candy box I have that matches the Shots parody: 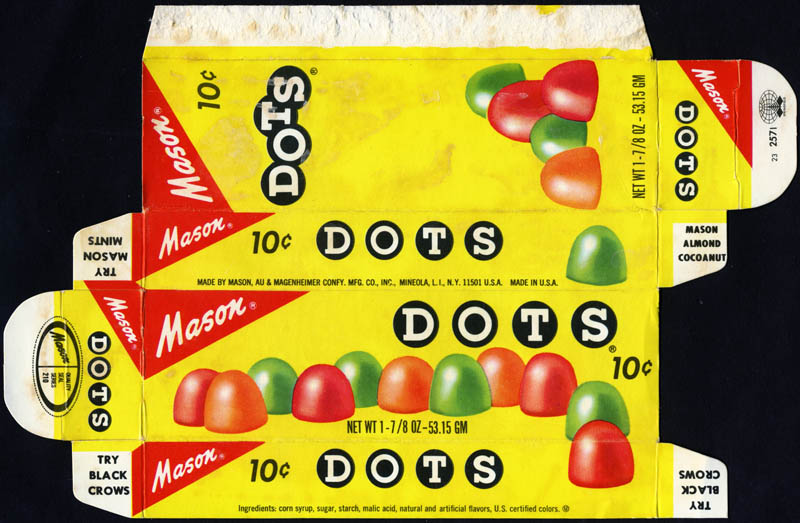 I have a number of 1970’s Mason Dots boxes, and I believe I can safely point to this one as the same version used by the original Wacky artist to work from.  But due to the nature of multiple size boxes offered for Dots back then, it’s impossible to be absolutely sure.  Needless to say, this one appears to match up on all relevant points.

Mason Dots are a classic American candy that have been around for generations, so it’s only fitting that they should have received the Wacky treatment.  The Wacky is simple and straightforward as was the original box.  Eventually I’ll be doing a larger retrospective on Dots themselves.  They have a long history, and a robust modern life, with regular special editions and holiday versions released.

So that’s it for today’s Wacky Wednesday.  I hope you’ll drop by each week to check out the new editions as we go along.

Before wrapping up, I’d like to plug a few Wacky-related items that I’m a big fan of.

For anyone who has fond memories of Wacky Packages or even a mild curiosity, I’d like to recommend two publications from Abrams publishing;  they are Wacky Packages, and Wacky Packages: New, New, New.  Both books beautifully reproduce the original  artwork and combine to showcase the first fourteen series of 1970’s Wacky Packages.

I’d also like to recommend the currently available Topps Wacky Packages Old School series 3, which picks up where the original Wackys left off.  Bringing new parodies of 1970’s products that never made it into the original series of stickers, they’re a lot of fun.  Conceived by my pal David Gross, he’s also the artist behind all of the new parody paintings therein.  Available only at the Topps Online Store. 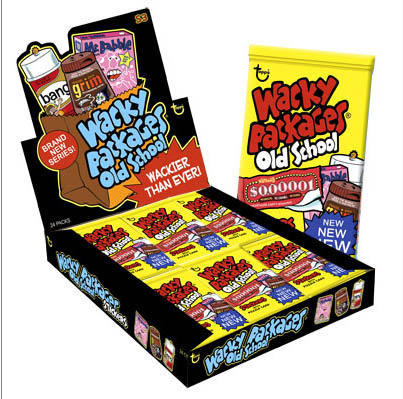 A New York City based writer, editor and sometimes actor. After spending much of the 1990′s in the comic book business helping tell the stories of Marvel Comics’ X-Men as series editor, he has since split his time between developing his own entertainment properties while still consulting and working on others. Having been described as “the Indiana Jones of lost and forgotten candy”, Jason is one of the country’s premier candy collectors and historians with his discoveries appearing in countless blogs, magazines, newspaper articles, and books. Always happy to share his knowledge and unique perspectives on this colorful part of our popular culture, Jason has consulted with New York’s Museum of Food and Drink and has also been a featured guest on Food Network’s Heavyweights, France’s M6 Capital, and New York’s TheActionRoom.com. My Google Profile+
View all posts by Jason Liebig →
This entry was posted in 1970's, 1980's, Gum. Bookmark the permalink.