One of the Halloween confectionery releases I’ve come to be keenly interested in each year are Snickers Pumpkins.  This is partially due to them being a holiday release of a classic popular brand, but it’s also due to their receiving rapidly evolving packaging designs in the last few years.  So make the jump to check out Snickers’ ever-evolving Halloween Pumpkins!

The earliest example Snickers Pumpkin I have in my collection is from the 2011 era and features a two-color “pumpkin” logo: 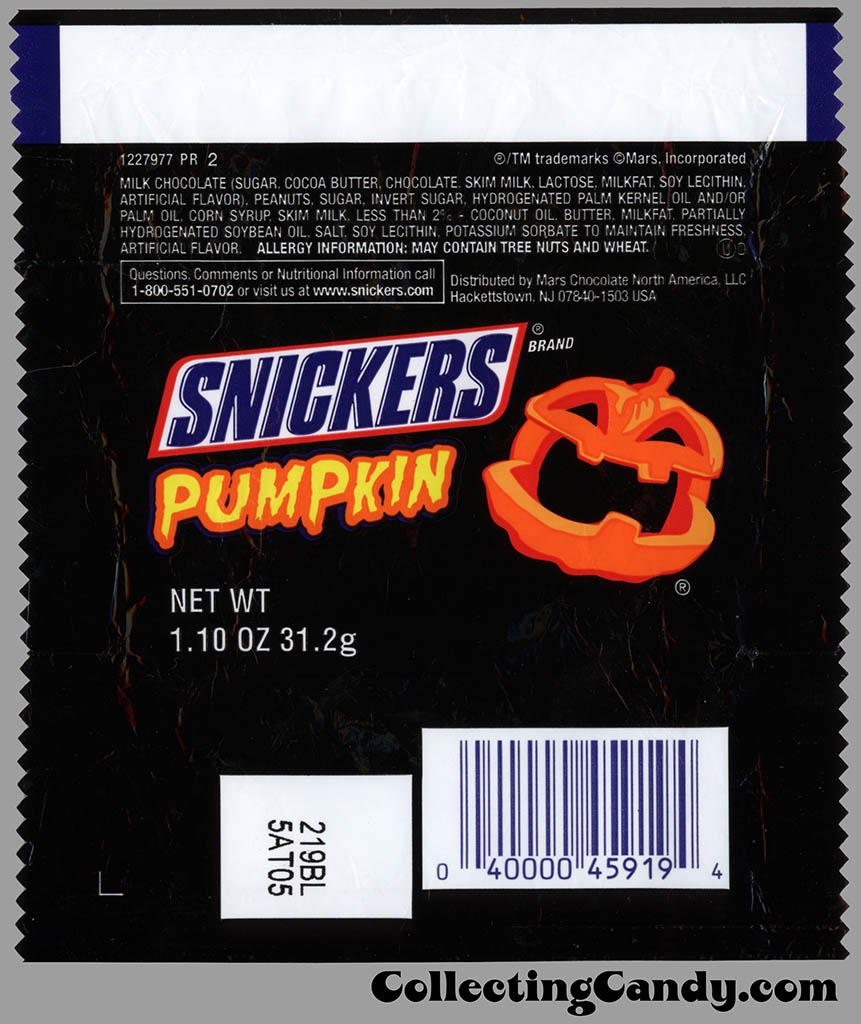 [Note:  One subtle detail to note is that on the earliest wrapper I’m showing today, the illustrated Jack-O-Lantern features a ® registered trademark indication, but the later wrappers simply feature the ™ or “trademark filed” indication.  I wonder if the packaging designer initially jumped the gun and used the registered mark when it actually had not received that designation yet?]

In 2012, Snickers Pumpkins 2-to-Go would get an upgraded look with a single-color “pumpkin” logo: 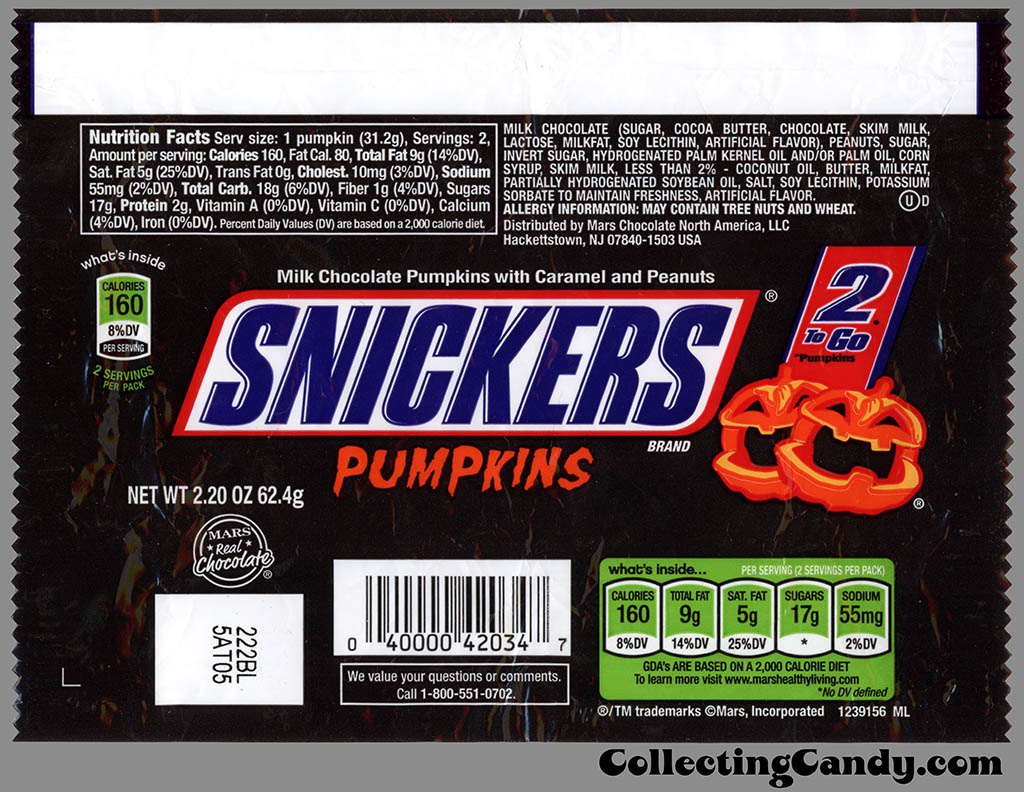 The following year, the packaging design for 2-to-Go would remain mostly the same, excepting for the change to TM and the front-of-pack calorie indication, now listing the calories for the entire contents, rather than just the per-serving calories: 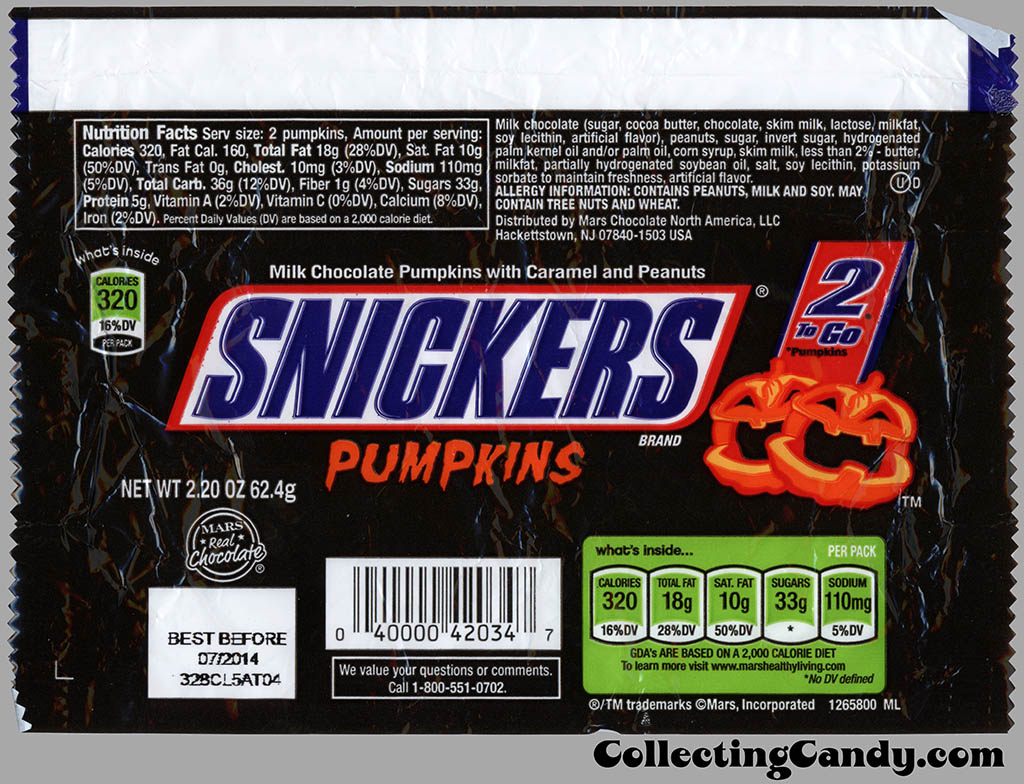 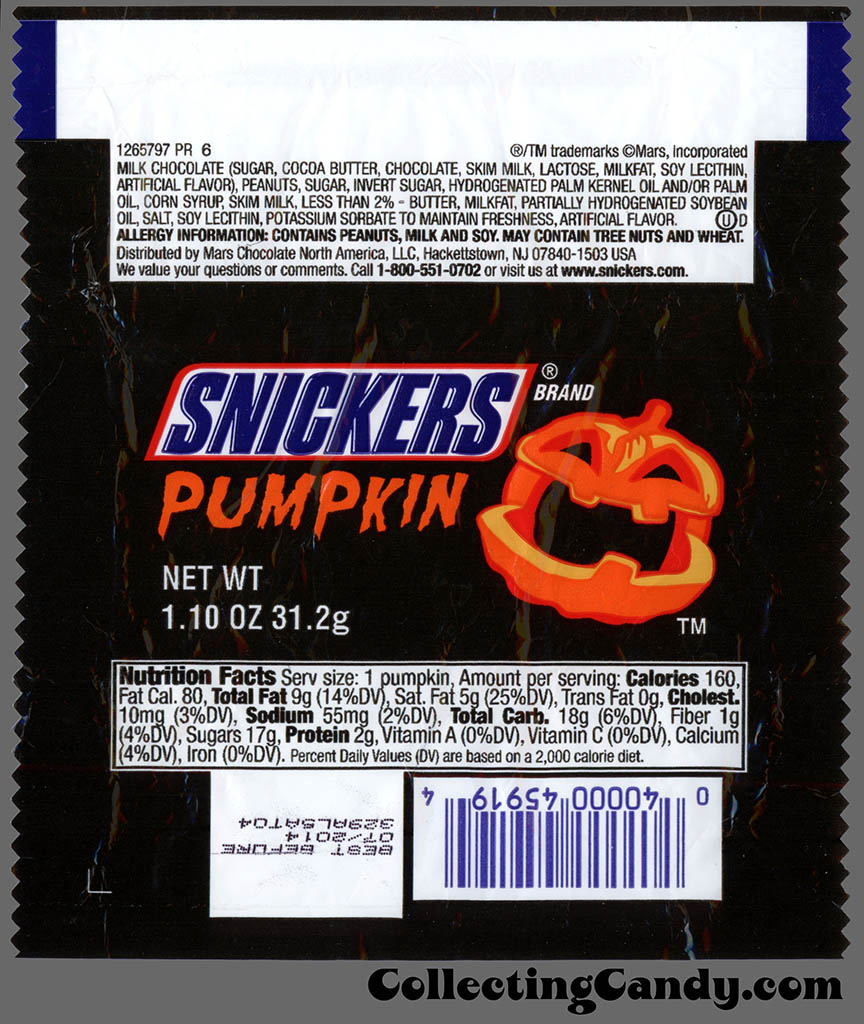 In 2013, Snickers Peanut Butter also got the Halloween Pumpkin treatment in both sizes: 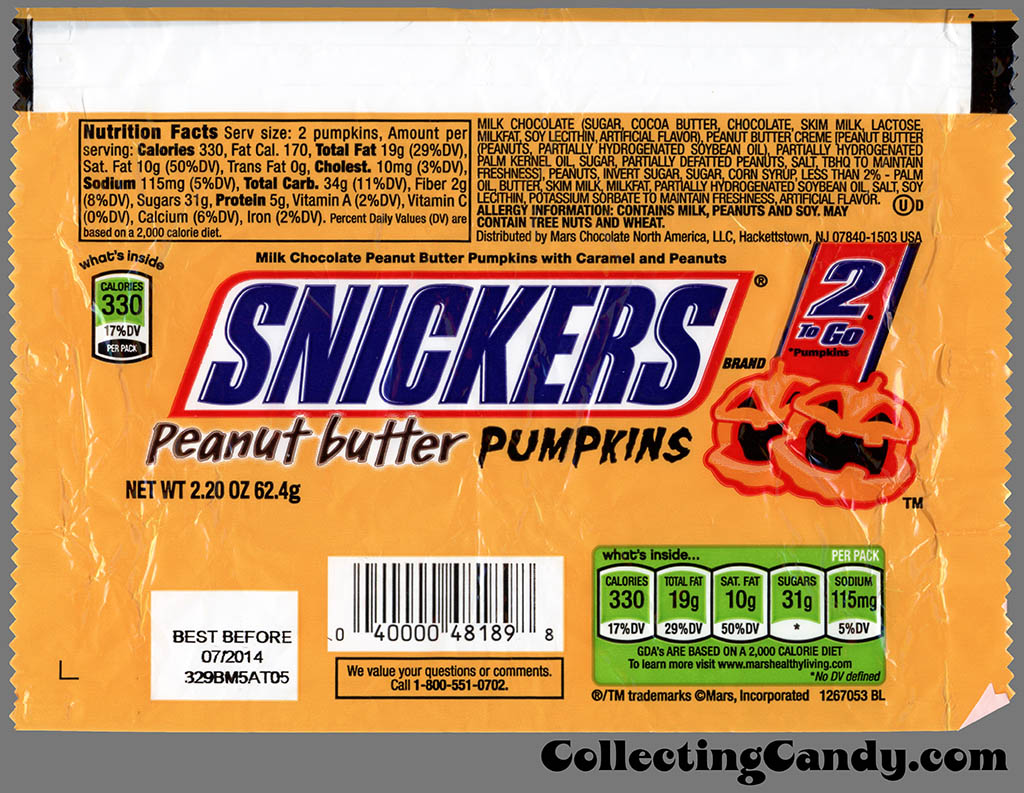 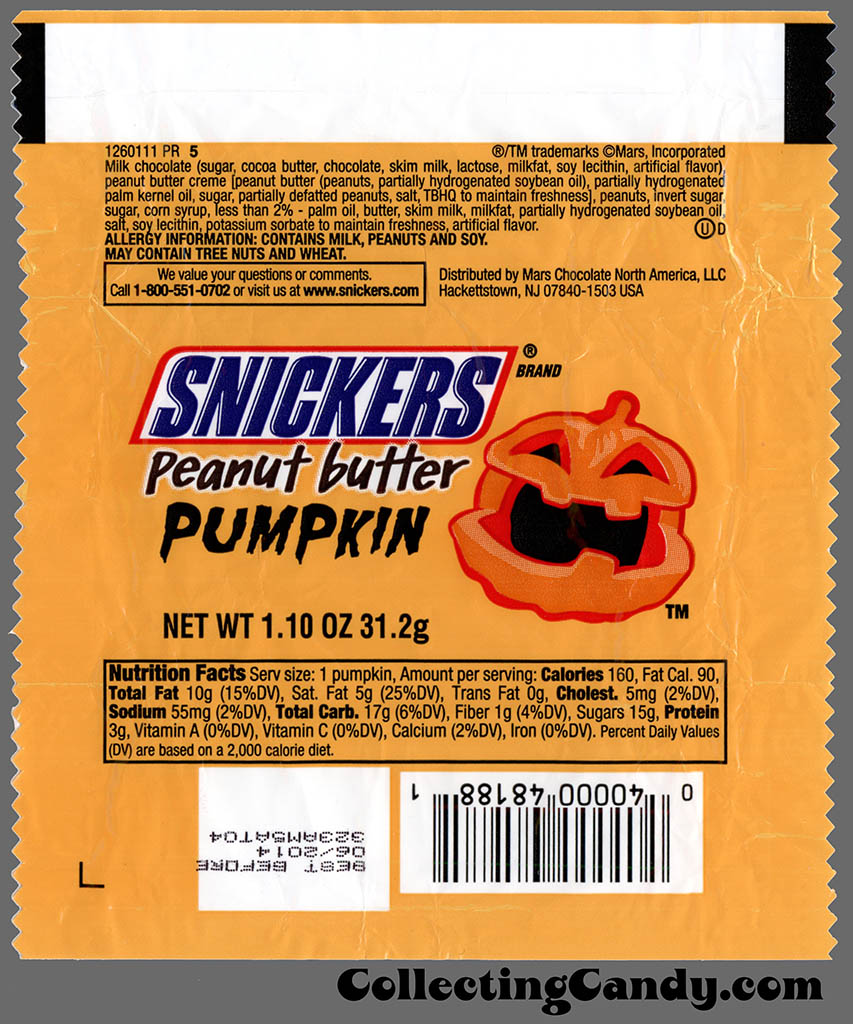 For Halloween this year, Snickers Pumpkins have returned yet again with a tweaked look.  The package background color has changed from black to the standard Snickers-brown and the “pumpkin” logo has been given a much slicker look: 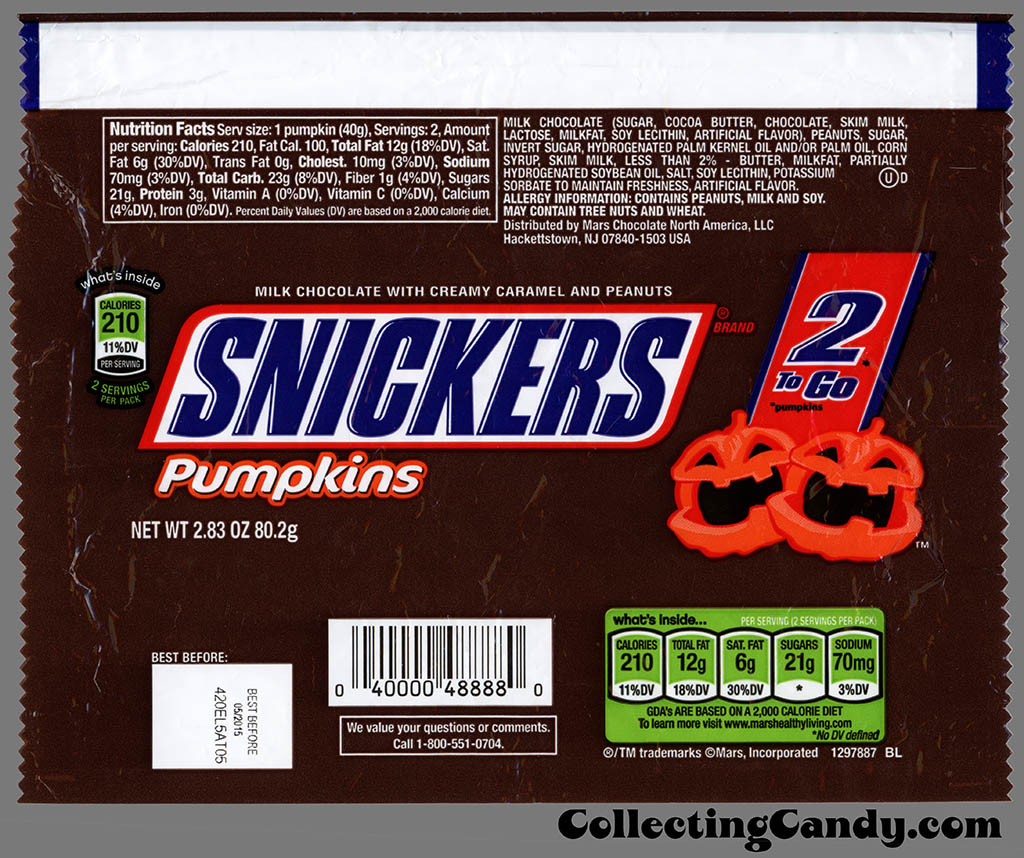 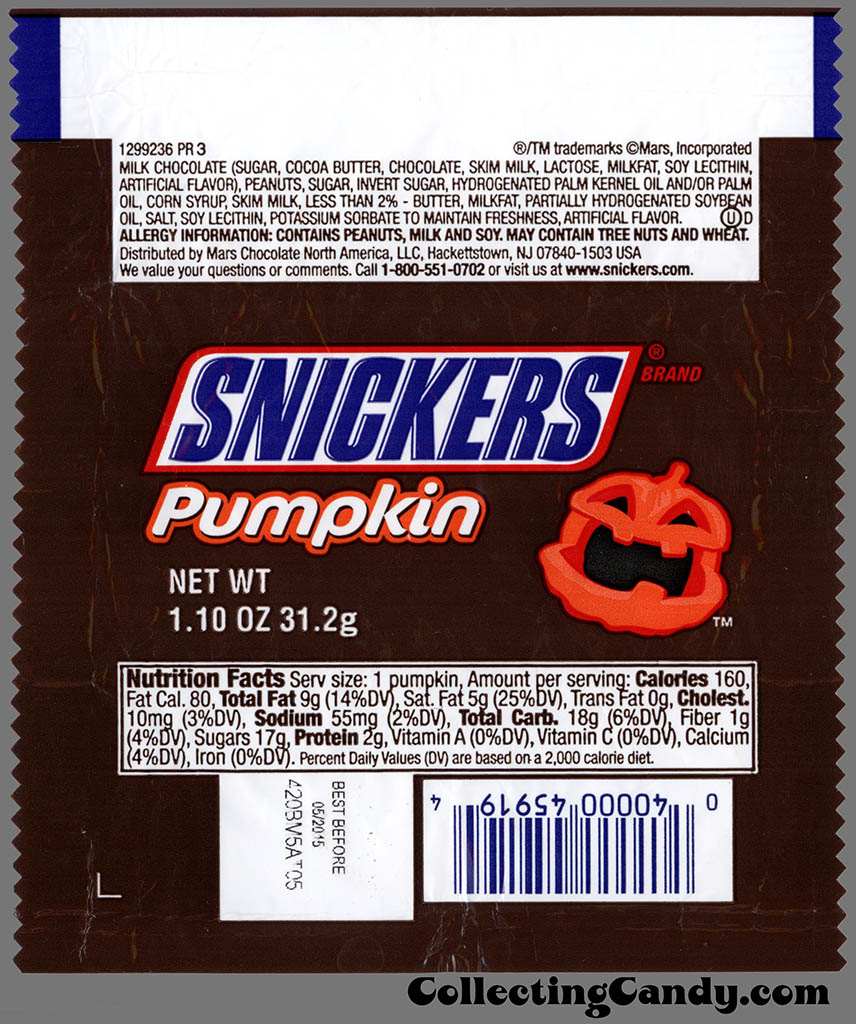 I’ve found that seasonal packaging tends to stay the same for at least a few years in a row without getting refreshed, but in the case of Snickers Pumpkins it’s been a rapid evolution of changing package designs.

Though Snickers Peanut Butter Pumpkins were a welcome addition for 2013, I don’t believe they were brought back for 2014 (at least I never came across any this year).  Instead, the newest addition to the Snickers family, Snickers Bites, got a Halloween-themed package: 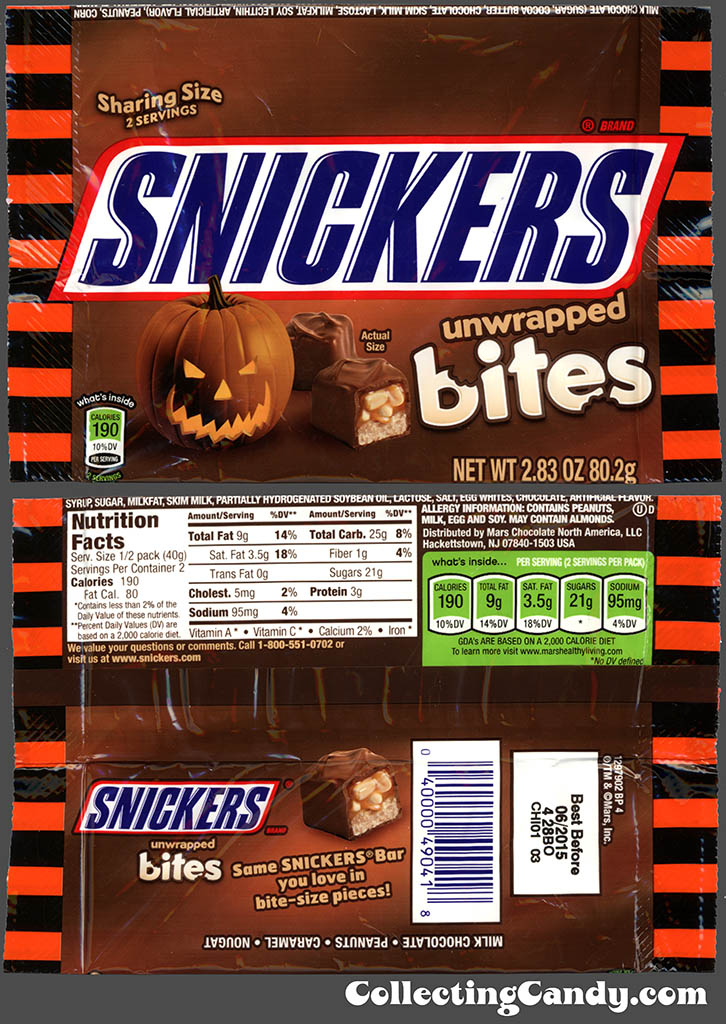 I was surprised but delighted to see Snickers Bites get the Halloween treatment this year as I think it makes for a great addition to the Halloween landscape.

And that’s everything I’ve got to share on Snickers ever-evolving Halloween Pumpkins.  See you next time!

A New York City based writer, editor and sometimes actor. After spending much of the 1990′s in the comic book business helping tell the stories of Marvel Comics’ X-Men as series editor, he has since split his time between developing his own entertainment properties while still consulting and working on others. Having been described as “the Indiana Jones of lost and forgotten candy”, Jason is one of the country’s premier candy collectors and historians with his discoveries appearing in countless blogs, magazines, newspaper articles, and books. Always happy to share his knowledge and unique perspectives on this colorful part of our popular culture, Jason has consulted with New York’s Museum of Food and Drink and has also been a featured guest on Food Network’s Heavyweights, France’s M6 Capital, and New York’s TheActionRoom.com. My Google Profile+
View all posts by Jason Liebig →
This entry was posted in Chocolate, CountdownToHalloween, Halloween, Holiday, Mars, Peanut Butter and tagged candy collecting, candy collection, candy collector, candy wrapper collection, candy wrapper collector, collectible, collecting candy, confectionery, confections, Halloween, Mars, packaging, peanut butter, seasonal, Snickers, sweets, vintage candy wrapper, wrapper. Bookmark the permalink.