Nude M&M’s?!? – A pair of my favorite Australian candy packages.

I’ve been seeing a new commercial for M&M’s here in the United States that I’ve gotten quite a kick out of.  It features a new M&M’s character at a party; Ms. Brown, voiced by Vanessa Williams. 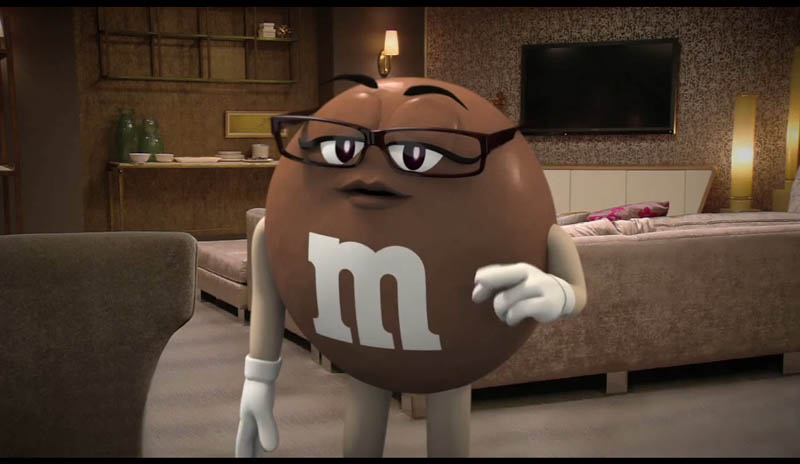 Because her candy coating is chocolate-colored, a few other guests get the wrong idea that she is, in fact, naked.  This culminates when Red (another M&M’s mascot) shows up, and thinking it’s “that kind of party” pulls off his shell and begins to dance. 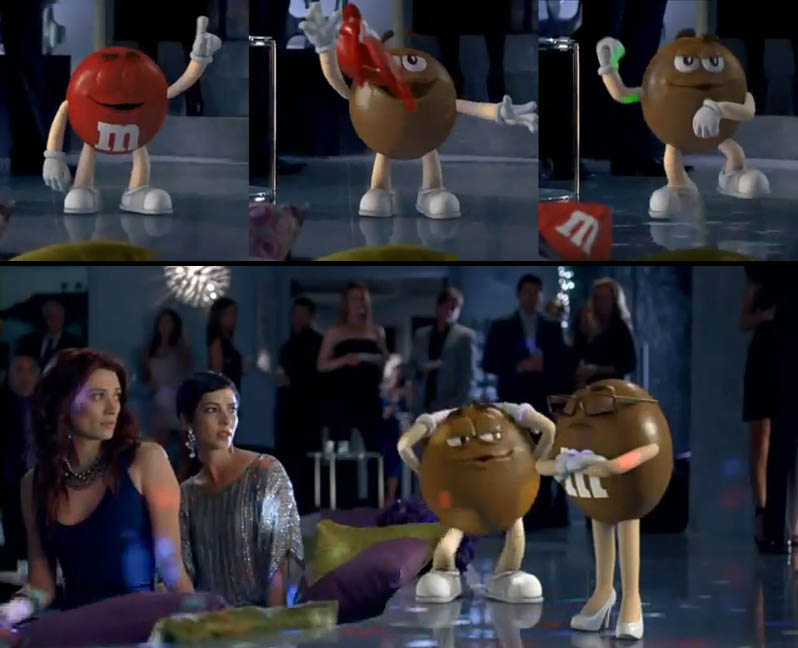 M&M's Red gets the wrong idea. Ms. Brown is not amused.

Oh, the strange delight I get from seeing M&M’s disrobe and act silly.  It’s a great campaign – funny and light but with just enough edge.  Vanessa Williams is also a perfect voice for this new character and it’s neat to see this color of M&M being brought back into the mix.

This all reminded me of another M&M’s campaign from a couple years earlier – one that was only found in the Australian market – and one that brought me two of my favorite pieces of modern M&M’s packaging.

In the Winter of 2009-2010, I was Googling something on M&M’s, I can’t recall exactly what, but I found my way to the M&M’s Australia website.  There I found a series of videos revealing how the M&M’s mascots, in a night of undefined revelry, agreed to go shell-less. 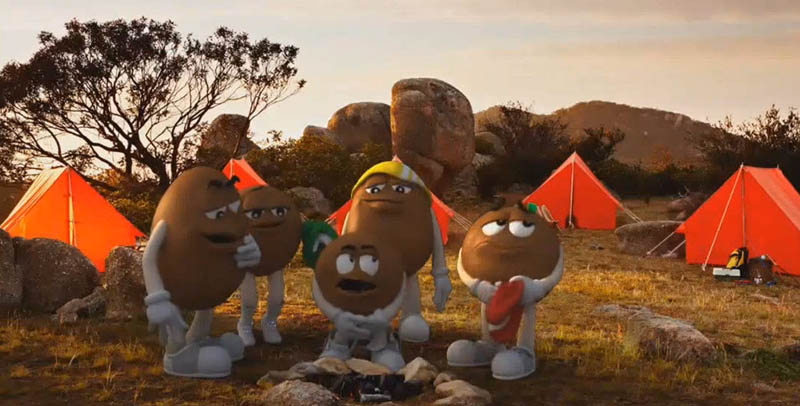 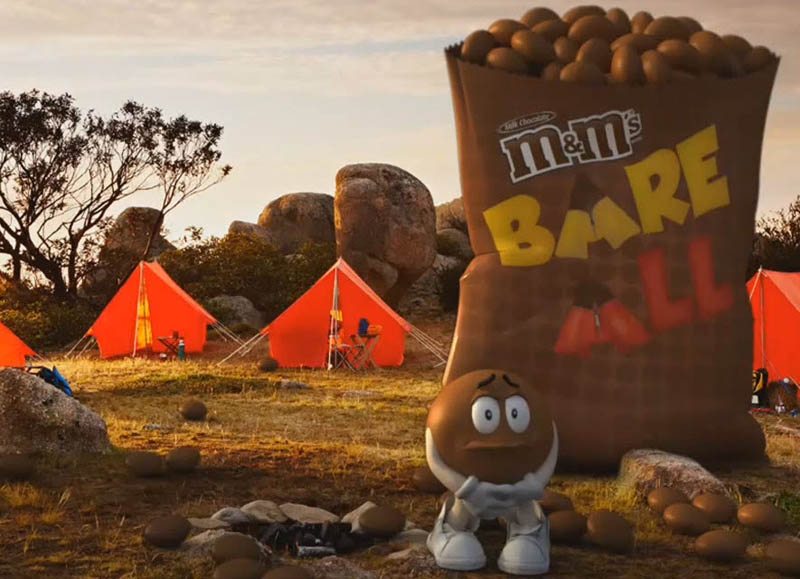 M&M’s Crispy has the most difficult time with this, and when all is said and done, he finds his shell has gone missing.  Red has lifted it to sell on eBay. 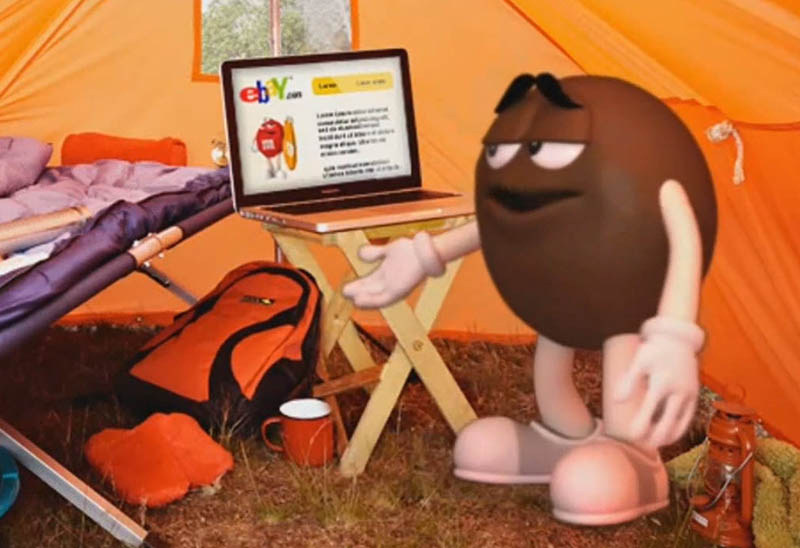 I found the campaign to be pretty racy for M&M’s, at least in my experience.  It was clear that outside of the United States, consumers were simply less uptight about their naked chocolate mascots.

I wondered if there might be an actual M&M’s pack that sported the Bare All promo, so I enlisted the help of an Australian Flickr pal of mine – Elli.  Elli tracked down a pair of M&M packages that did, in fact, feature the promo, and soon I had them in my collection.  So a fun promo but also a great piece of candy packaging. 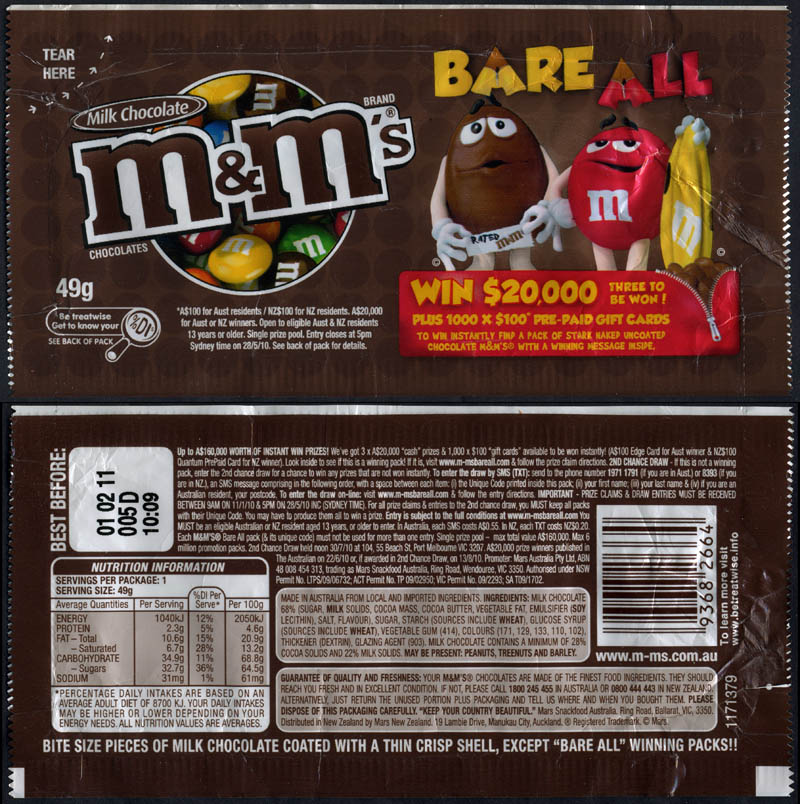 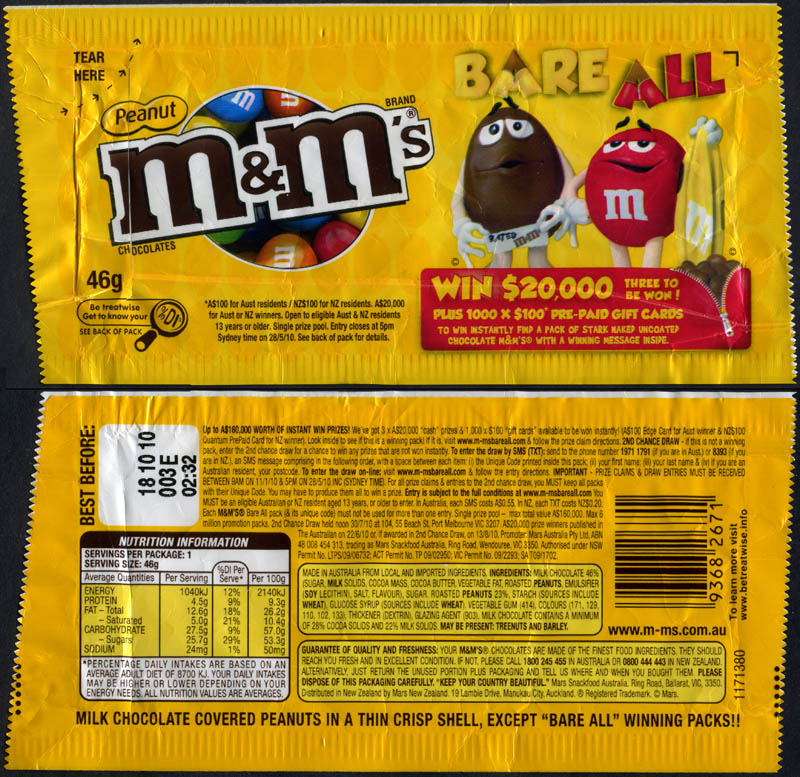 Check out the zoomed in image – Peanut is covering himself with a “Rated M&M” card: 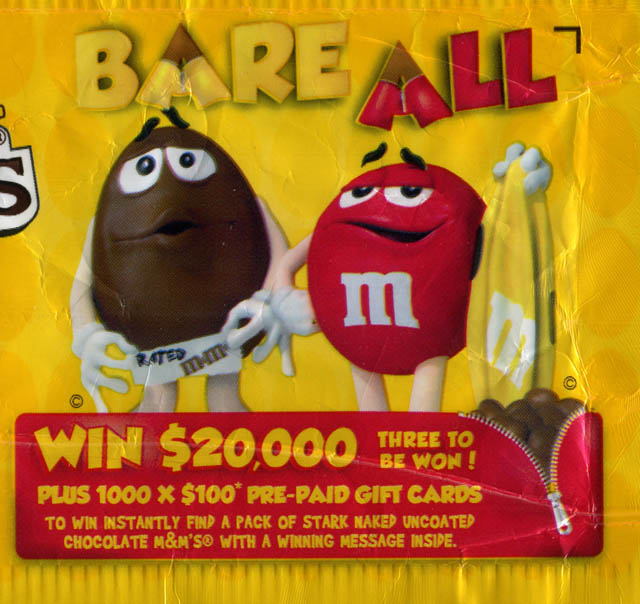 I should note that the eBay auction was not just a gag.   M&M’s Australia actually had an eBay auction for Crispy’s shell, and it was for a good cause.  The proceeds went to a charity (the McGrath Foundation), and after 43 bids, the auction closed at $610 Australian. 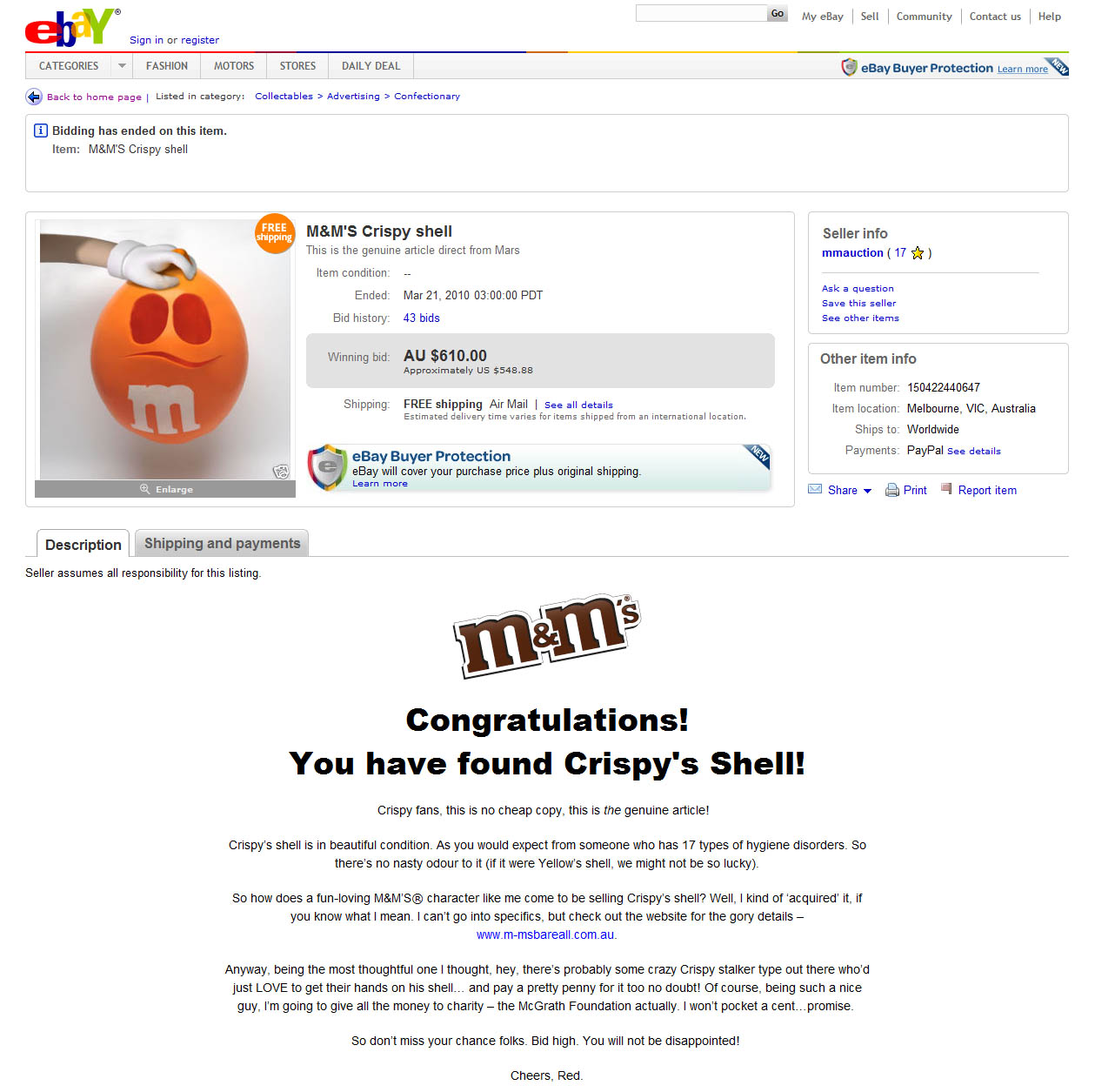 I assume that what the winner received was some kind of vinyl one-of-a-kind prop, but I wasn’t able to track down that information.

M&M’s Bare All was a slightly-edgy yet adorably sweet campaign to happen upon, and fortunately I was able to have a friend track down the fun packages for me.  The Bare All packs remain some of my favorite modern candy pieces. [Thanks again to my pal Elli for snagging them for me!]

With larger brands like this, there are typically different promotions going on in different parts of the world.  For a collector this presents a challenge to even be aware of them, let alone acquire them.  When you do, it can be interesting and fun to see the differences in design and approach used around the world.

M&M’s getting caught naked was also the theme of a TV-spot for Japanese M&M’s.  I don’t know if there was a corresponding package or promotion, though if there was I’d love to see it.  The idea here was that journalists barge into Miss Green’s dressing room and catch her by surprise, creating a scandalous video that goes viral.

That’s all for naked mascots.  Tomorrow I’ll be back with my first installment of CollectingCandy.com’s Wacky Wednesdays.  Tonight I’ll be joining the NerdLunch podcast as a special guest.  I’ll have more details on how and where to listen later tonight!

A New York City based writer, editor and sometimes actor. After spending much of the 1990′s in the comic book business helping tell the stories of Marvel Comics’ X-Men as series editor, he has since split his time between developing his own entertainment properties while still consulting and working on others. Having been described as “the Indiana Jones of lost and forgotten candy”, Jason is one of the country’s premier candy collectors and historians with his discoveries appearing in countless blogs, magazines, newspaper articles, and books. Always happy to share his knowledge and unique perspectives on this colorful part of our popular culture, Jason has consulted with New York’s Museum of Food and Drink and has also been a featured guest on Food Network’s Heavyweights, France’s M6 Capital, and New York’s TheActionRoom.com. My Google Profile+
View all posts by Jason Liebig →
This entry was posted in M&M's, Uncategorized. Bookmark the permalink.

4 Responses to Nude M&M’s?!? – A pair of my favorite Australian candy packages.