With assortments that first arrived in stores just last Christmas, Whitman’s has been releasing licensed Peanuts holiday-themed chocolate bars in fun, illustrated boxes.  I first covered them for Christmas 2013 and followed that up with a piece on their Valentine’s assortment earlier this Spring.  Today I’m excited to share their fun new trio of Halloween-themed Peanuts chocolate bars for 2014!

Peanuts is an evergreen license so I think it was a smart move for Whitman’s to pick it up and to utilize it in this way, with new seasonal releases throughout the year.  They’re inexpensive, typically selling at a dollar each at retail, so perfect for casual gift-giving – and who doesn’t love The Peanuts Gang and The Great Pumpkin?

The graphics for the packaging on these have been a mix of new designs as well as images inspired directly from some of the classic Peanuts TV holiday specials.

Here are the three chocolate bar boxes that make up this years’ Halloween assortment: 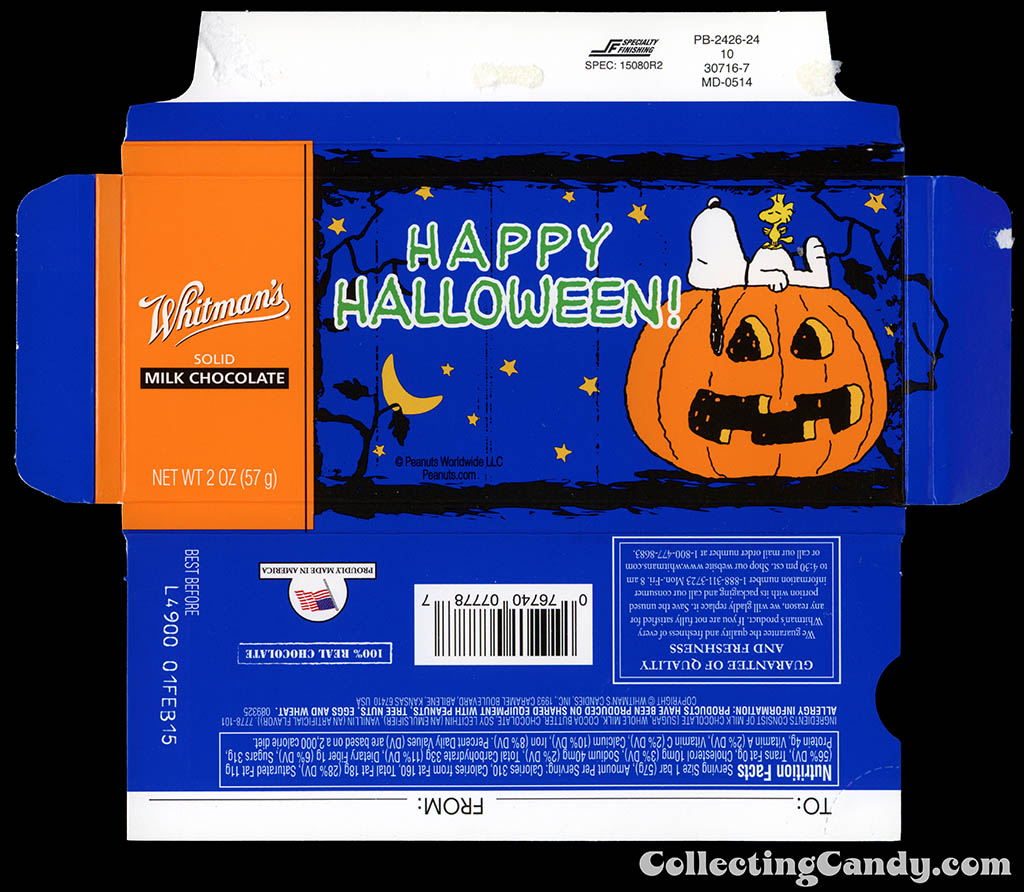 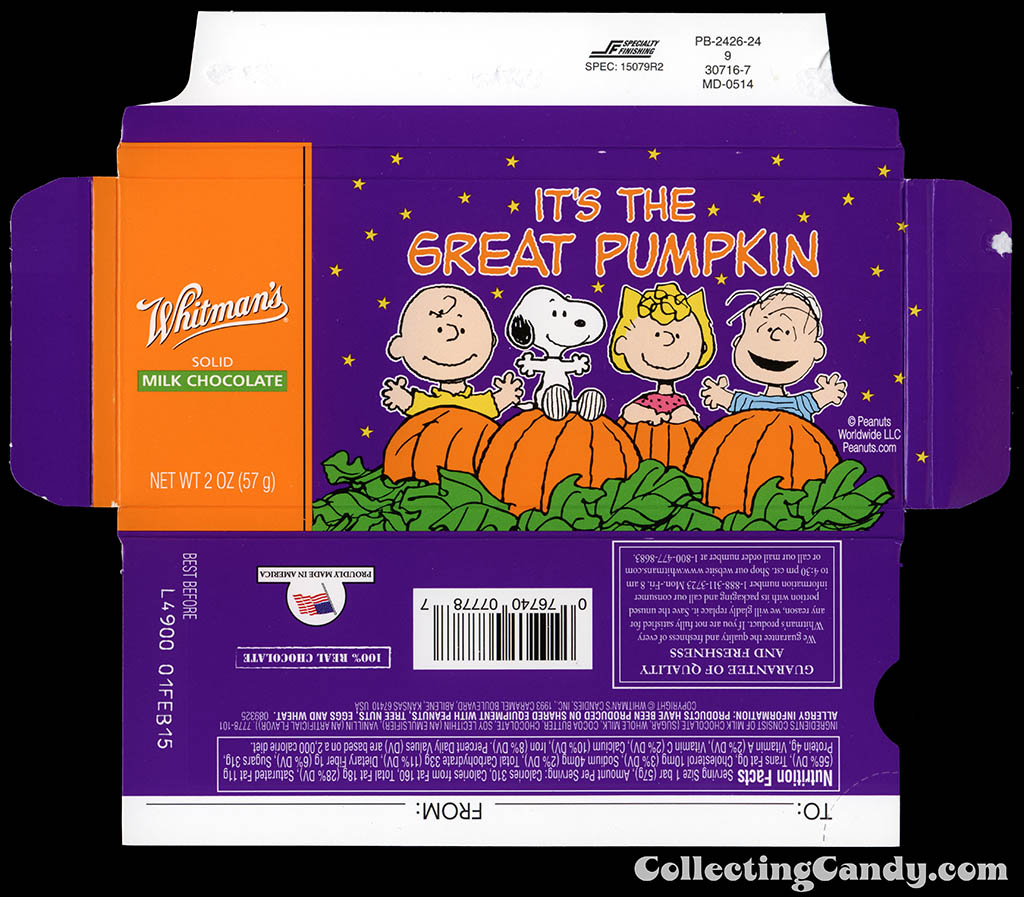 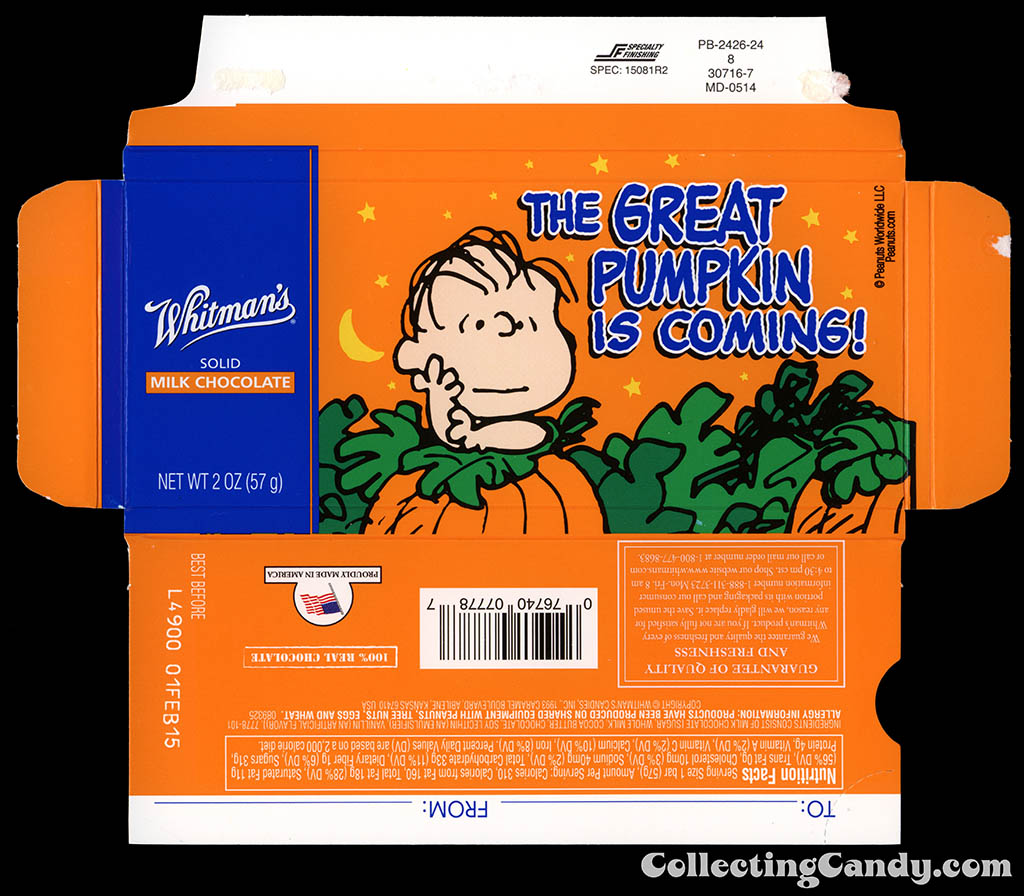 Beyond these single chocolate bar releases, I believe Whitman’s has begun to put the license to use with other format confectionery products.

And that’s everything I’ve got to share today on Whitman’s delightful Halloween-themed Peanuts bars.

A New York City based writer, editor and sometimes actor. After spending much of the 1990′s in the comic book business helping tell the stories of Marvel Comics’ X-Men as series editor, he has since split his time between developing his own entertainment properties while still consulting and working on others. Having been described as “the Indiana Jones of lost and forgotten candy”, Jason is one of the country’s premier candy collectors and historians with his discoveries appearing in countless blogs, magazines, newspaper articles, and books. Always happy to share his knowledge and unique perspectives on this colorful part of our popular culture, Jason has consulted with New York’s Museum of Food and Drink and has also been a featured guest on Food Network’s Heavyweights, France’s M6 Capital, and New York’s TheActionRoom.com. My Google Profile+
View all posts by Jason Liebig →
This entry was posted in Boxed, Chocolate, CountdownToHalloween, Halloween, Holiday, Uncategorized and tagged candy collecting, candy collection, candy collector, candy wrapper collection, candy wrapper collector, Charles Schulz, Charlie Brown, collectible, collecting candy, confectionery, confections, Halloween, holiday, licensed, packaging, peanuts, Russell Stover, seasonal, Snoopy, sweets, vintage candy wrapper, Whitmans, wrapper. Bookmark the permalink.