Easter Week 2014: Starburst Jellybeans! (They’ve been around longer than you think!)

If Halloween is the season of candy corn than Easter must certainly be the season of the jellybean.  It no doubt has to do with how well the colorful confections complement the look of traditionally dyed Easter Eggs.  These days, countless candy brands will release their own branded jellybeans during the lead-up to Easter.  One that has been doing so for longer than you might realize and has also carved out quite a successful niche for itself is Starburst, with its Starburst Jellybeans line!

I had long assumed that Starburst Jellybeans were a creation of the last decade and certainly no older than the 2000’s.   But as it turns out these have been around nearly 20 years and possibly longer, as you can see in the following candy trade magazine advertisement from 1995: 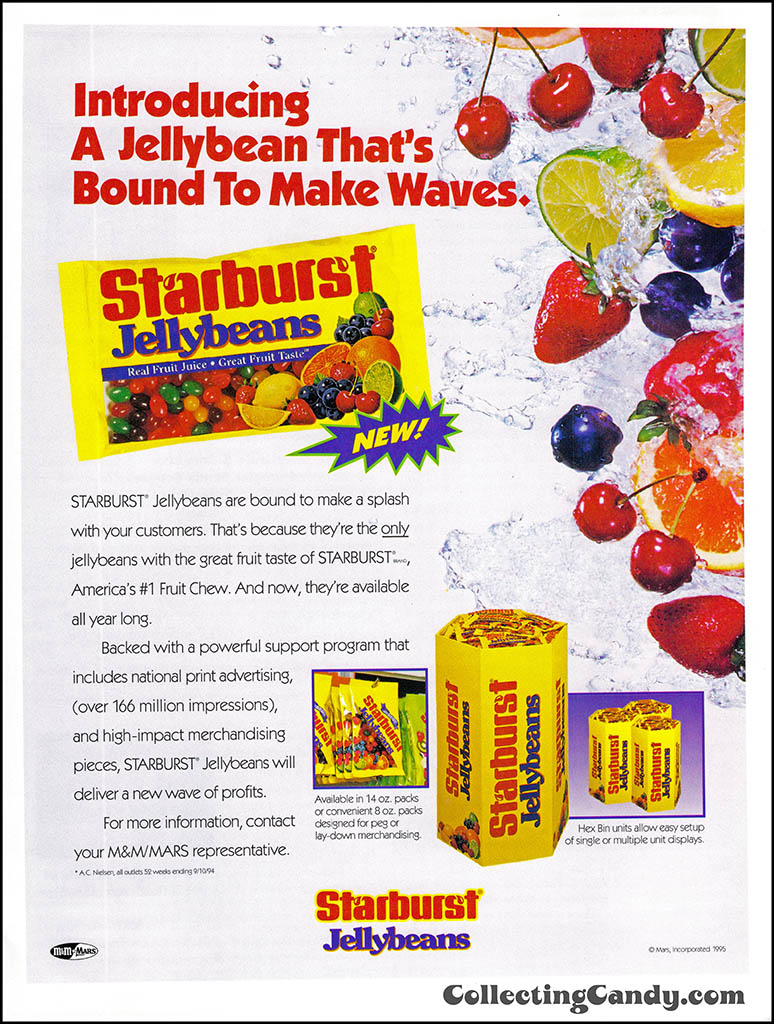 That ad refers to Starburst Jellybeans as being “NEW!” but also describes how they are now “available all year long.”  So perhaps these were an Easter season exclusive the previous year and for 1995 they went to an all-year-round distribution.   Here’s a close-up look at the Starburst Jellybeans package from 1995 seen in the ad: 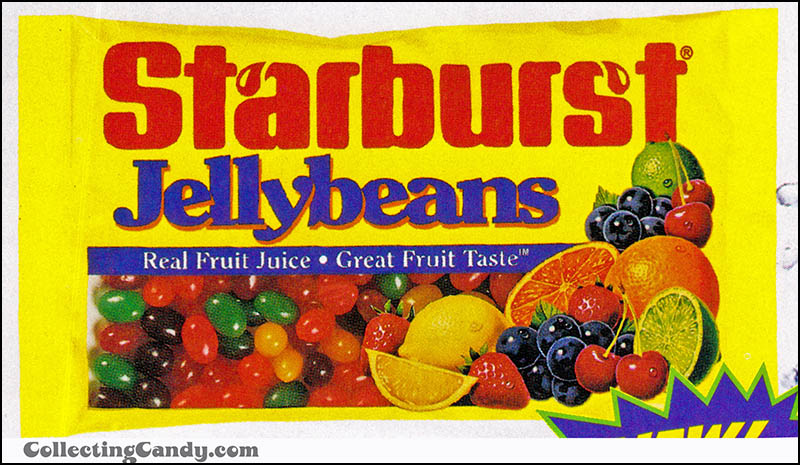 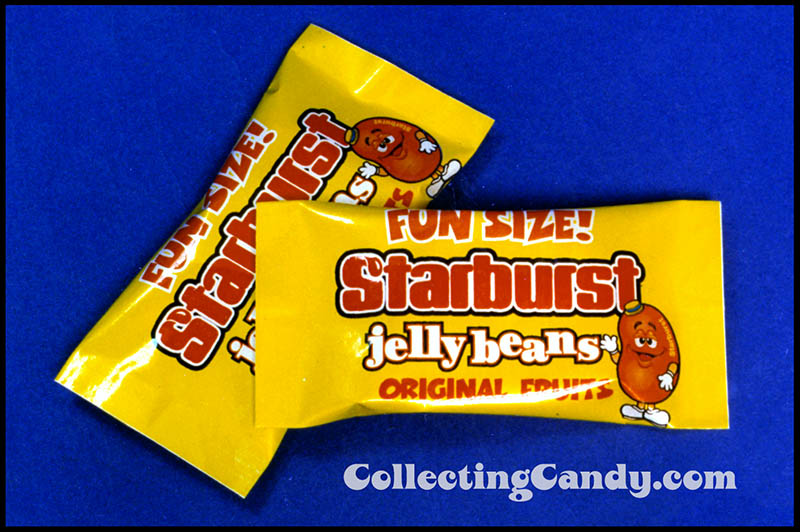 The earliest Starburst Jellybeans piece that I have in my collection comes from a few years later – I’m guessing this one is from the late 1990’s or earlier 2000’s [Note that in the 1995 package, the jellybeans appear quite generic, but in this next pack it’s clear that each individual piece is stamped with the Starburst logo]: 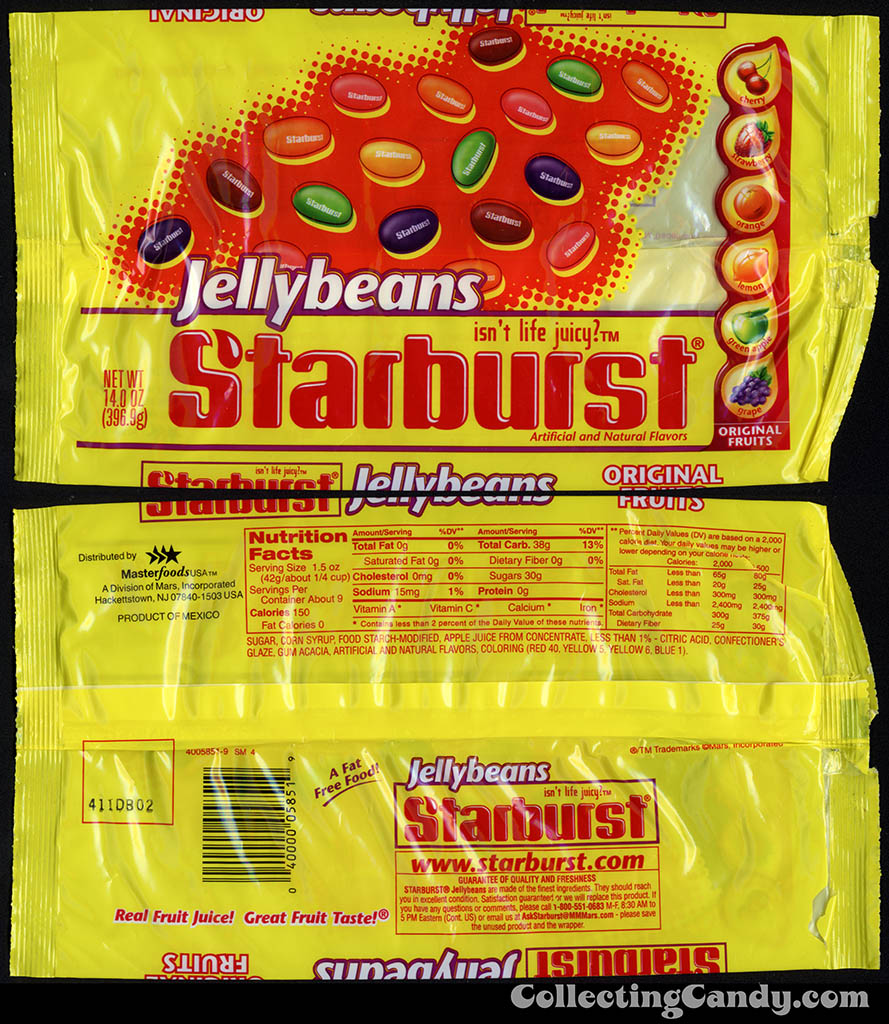 As you can see, the design of the packaging had already evolved pretty significantly by that point.

Jumping ahead to the last few years and especially today, Starburst Jellybeans have become a pretty big area for the Starburst brand.  Perhaps the current variety of Starburst Jellybeans is why I assumed that they had only been introduced recently – you can’t miss them in the candy isle now.

I first picked them up as a typical retail size 2 oz candy pack a couple of years ago: 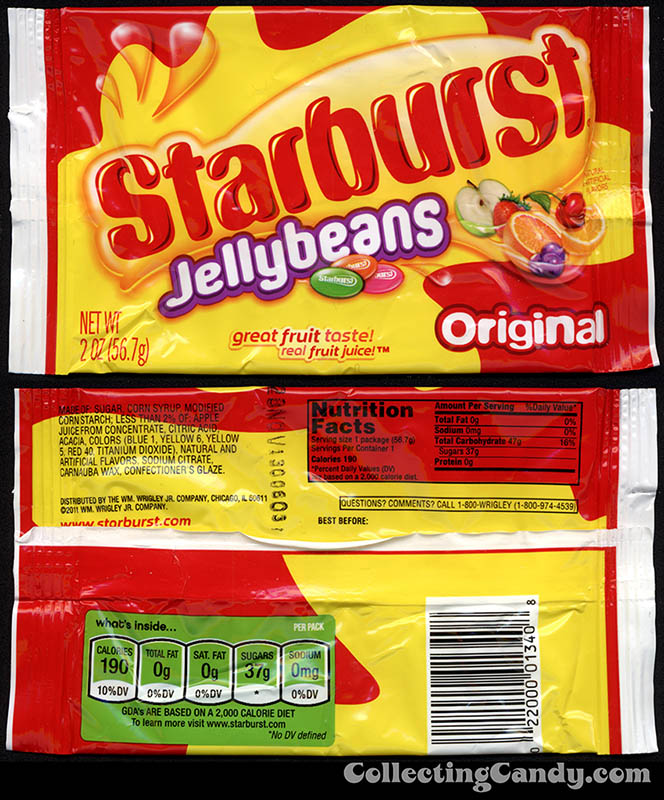 Incorporating the modern version of the Starburst logo and color scheme, the Starburst Jellybean line has expanded quite a bit in the last few years, at least where the larger bags are concerned.

I’ve found five different flavor variations in the current Starburst Jellybean lineup.  Some of them appear to be all-year-round offerings, while a pair of them definitely look to be Easter seasonal only.  Here they are: 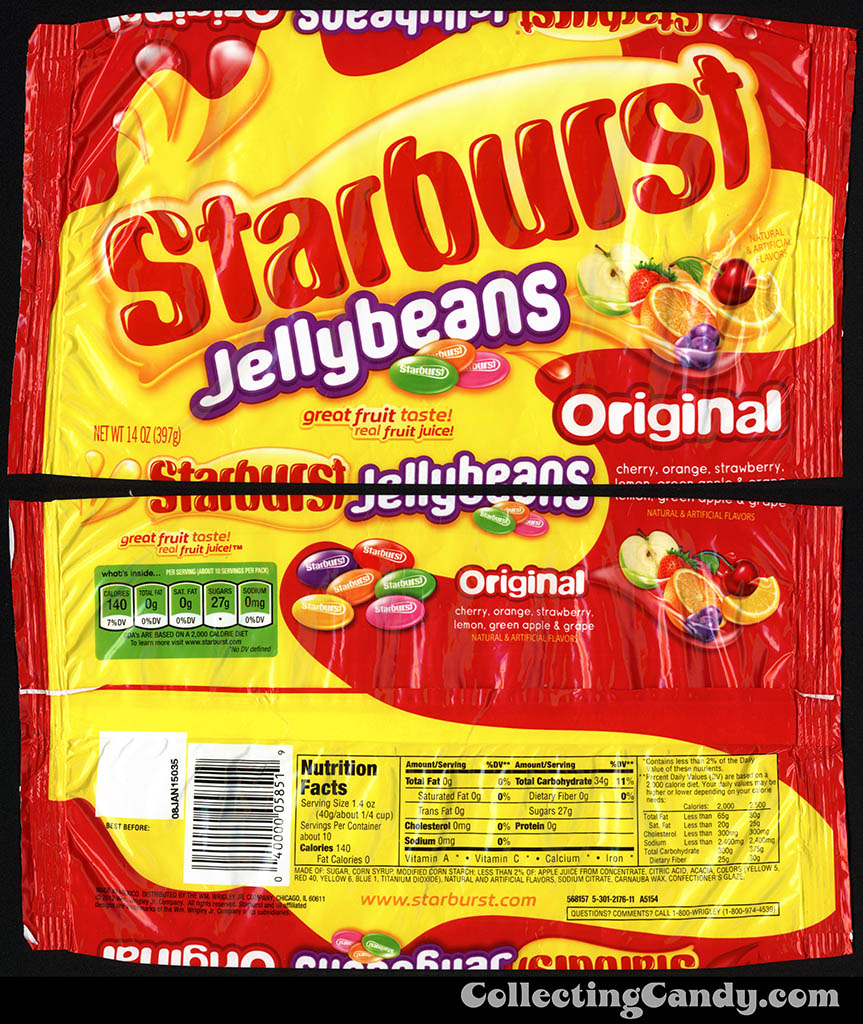 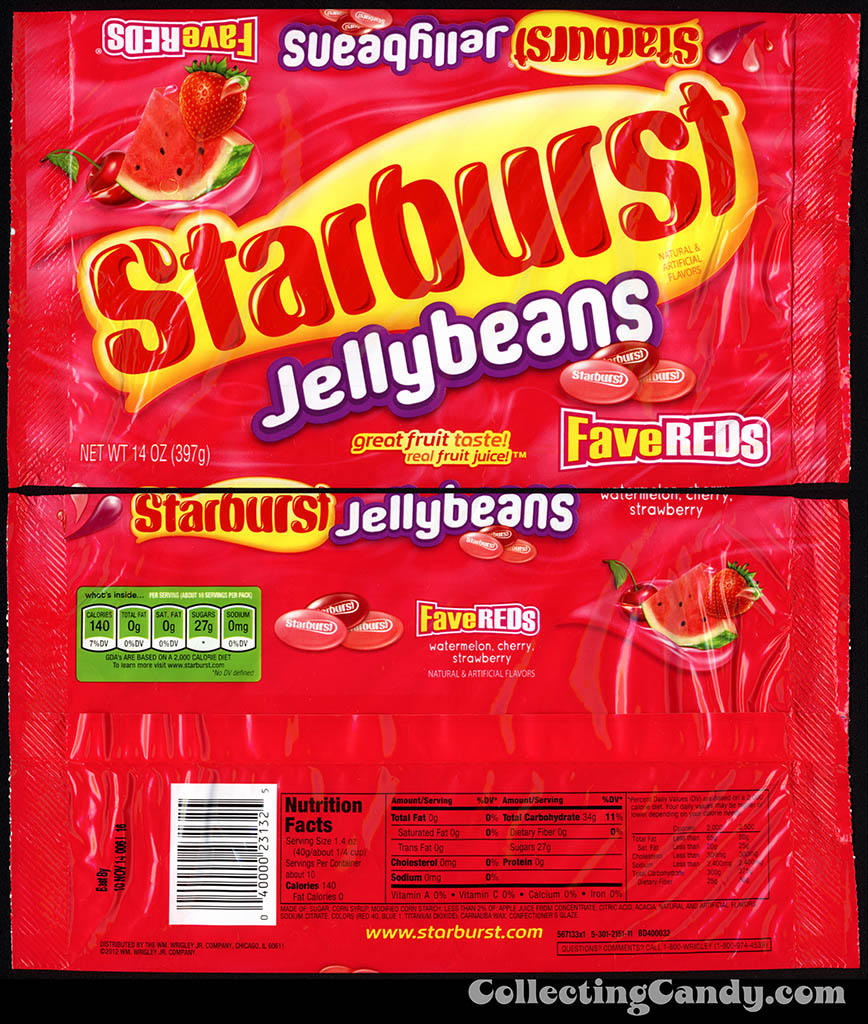 Note the Easter basket and Easter egg graphics on these next two packs: 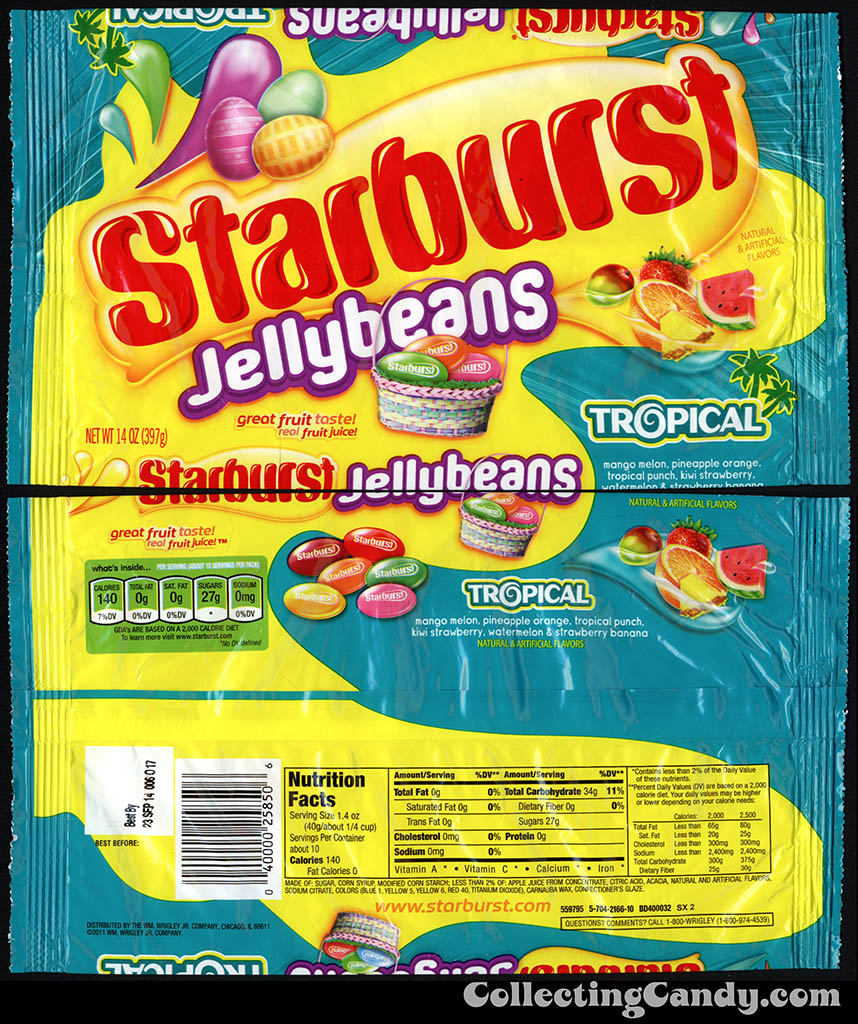 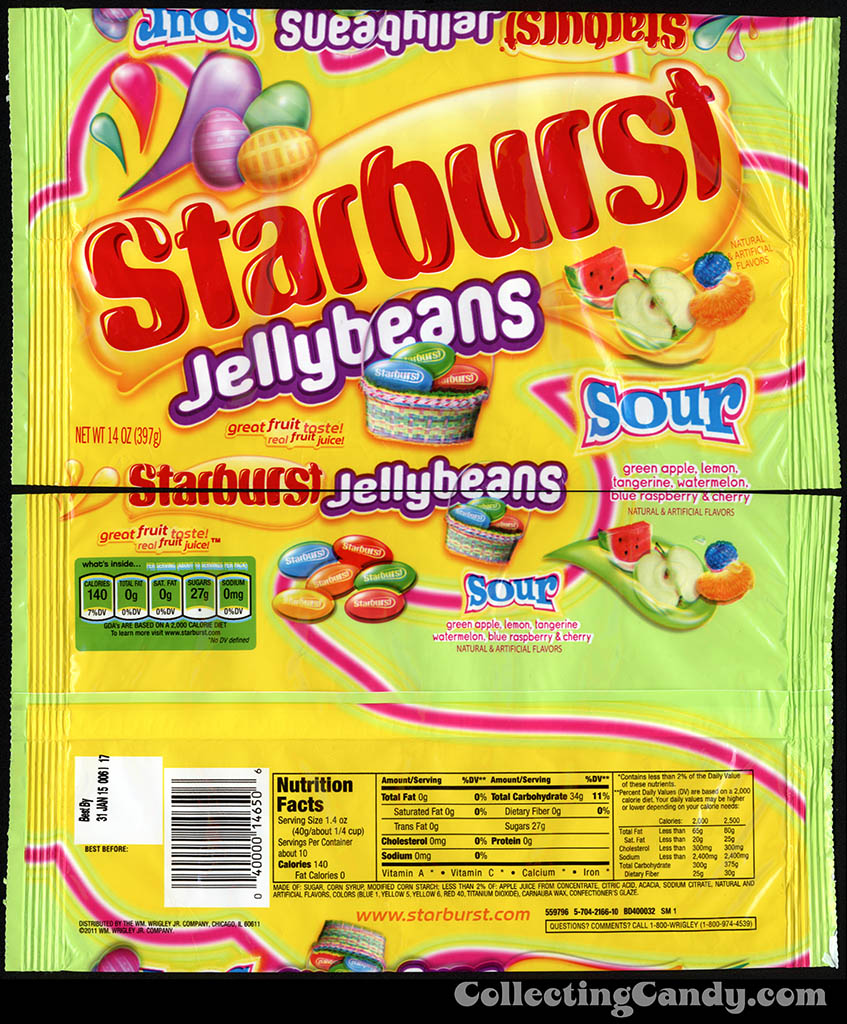 For the last of these flavors, I wanted to show you the packaging for Starburst’s “Crazy Beans”.   These are notable as they don’t actually refer to themselves as jellybeans, though that is certainly what they are.

I also have two different packaging versions for Starburst Crazy Beans, one from this year and one from a few years earlier.  At first glance these two packages appear identical but they are not.  I think it’s interesting to note the subtle design changes that were made and makes one realize that for some companies, packaging design is always undergoing evaluation and adjustments.  Here they are – and this might make for a fun game of “spot the differences”: 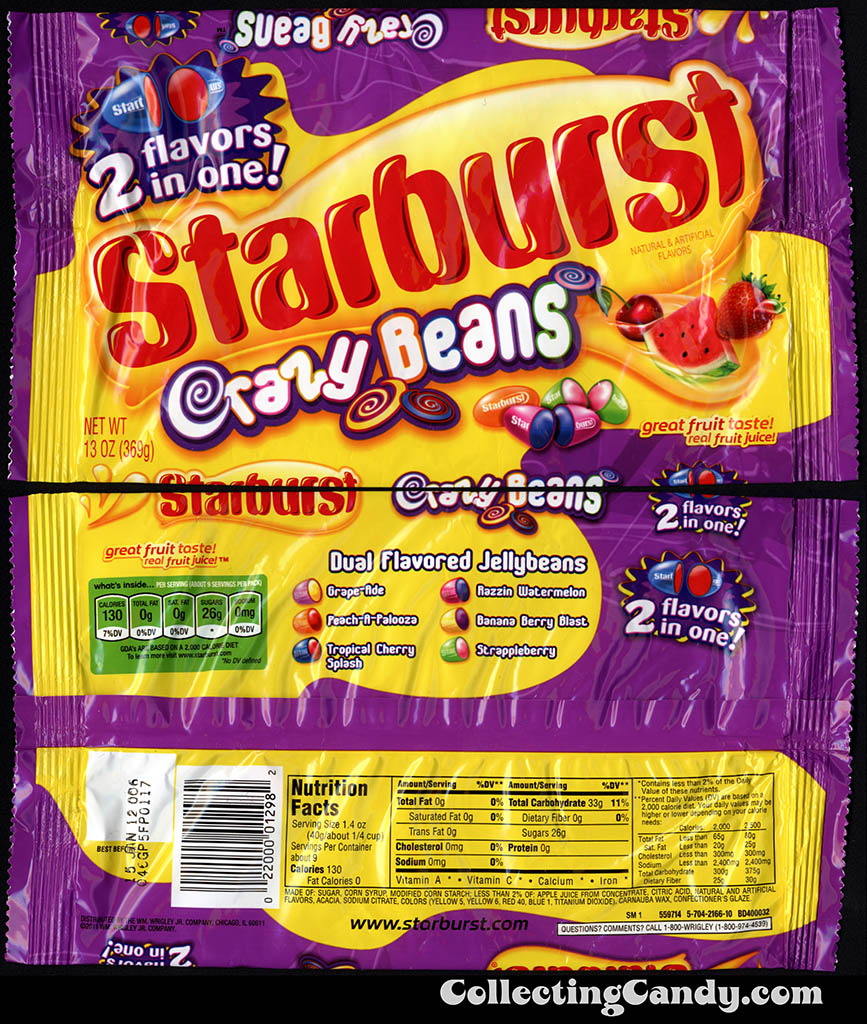 That’s all of the Starburst Jellybean pieces I have to share today, but since this is Easter week, I also wanted to include a trio of Easter-themed Starburst packages I’ve picked up in the last few years:

First up is an Easter-themed box for Starburst FlavorMorph from 2012: 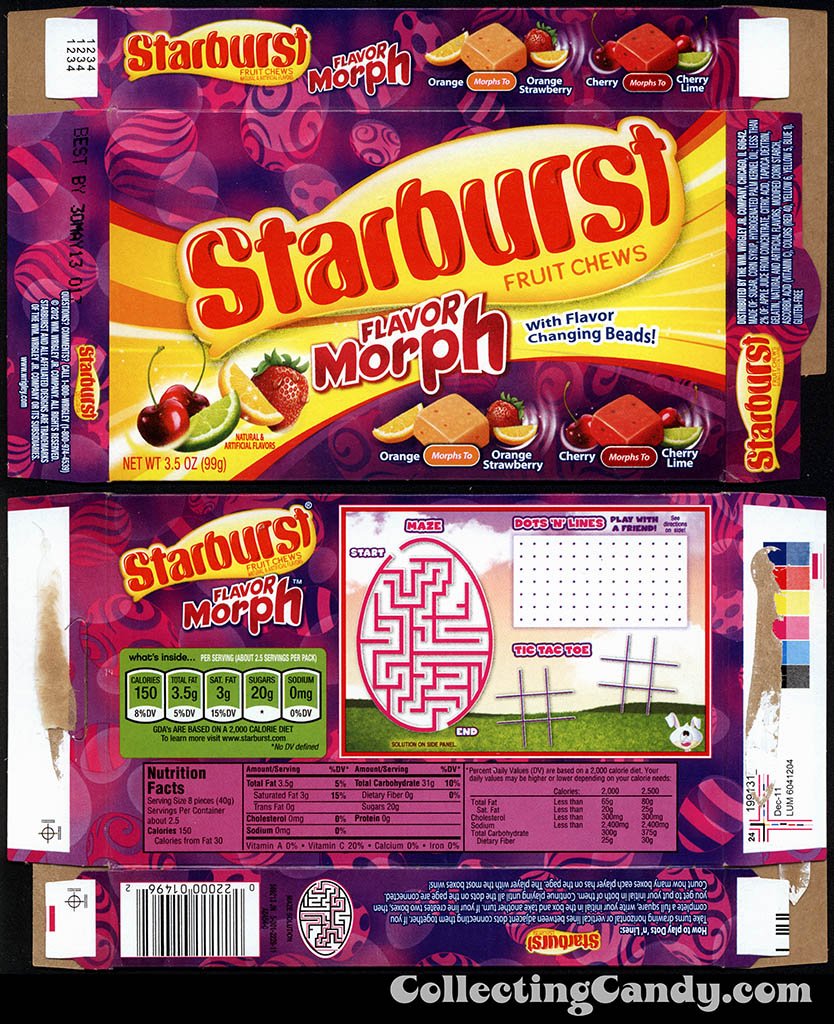 Here’s an Easter-themed box for Starburst Original that’s been on shelves the last couple of seasons:

And here’s the new Easter box design for Starburst Original, introduced in 2014: 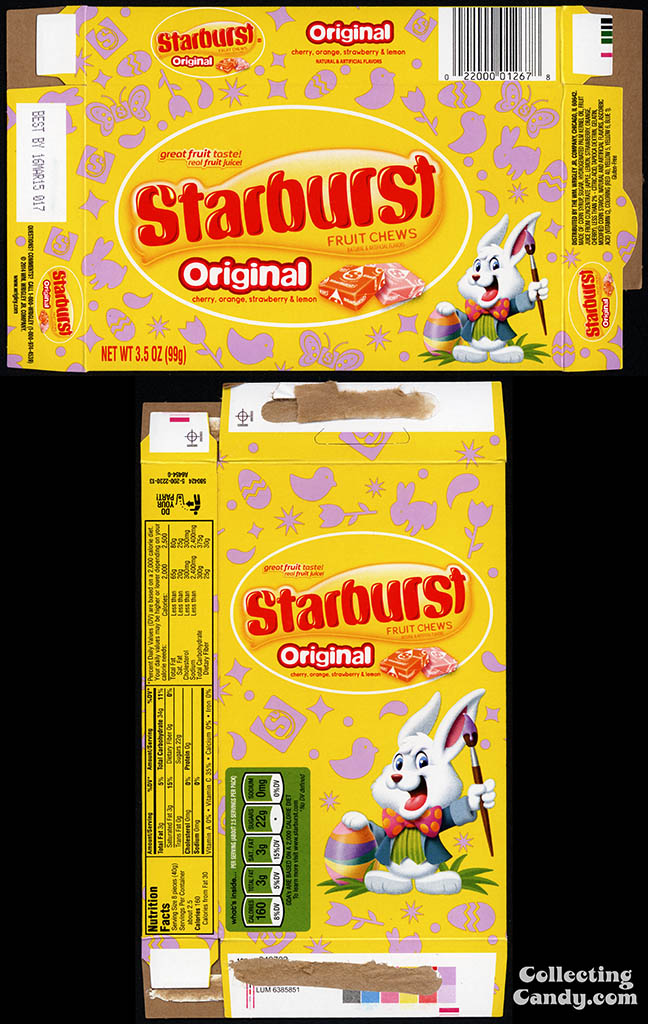 Finally, another piece I picked up this year was the Easter packaging for Starburst Fun-Size.  The large package has got a great graphical look to it which matches the new style Easter box, and the individual wrappers are also worth checking out: 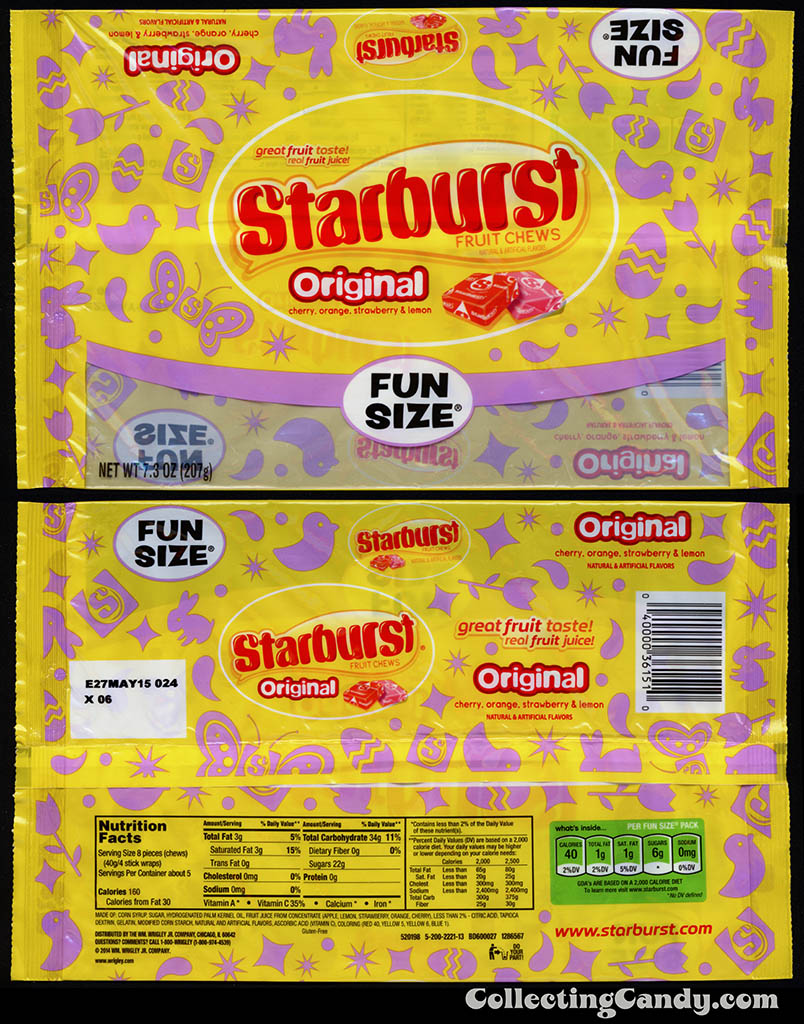 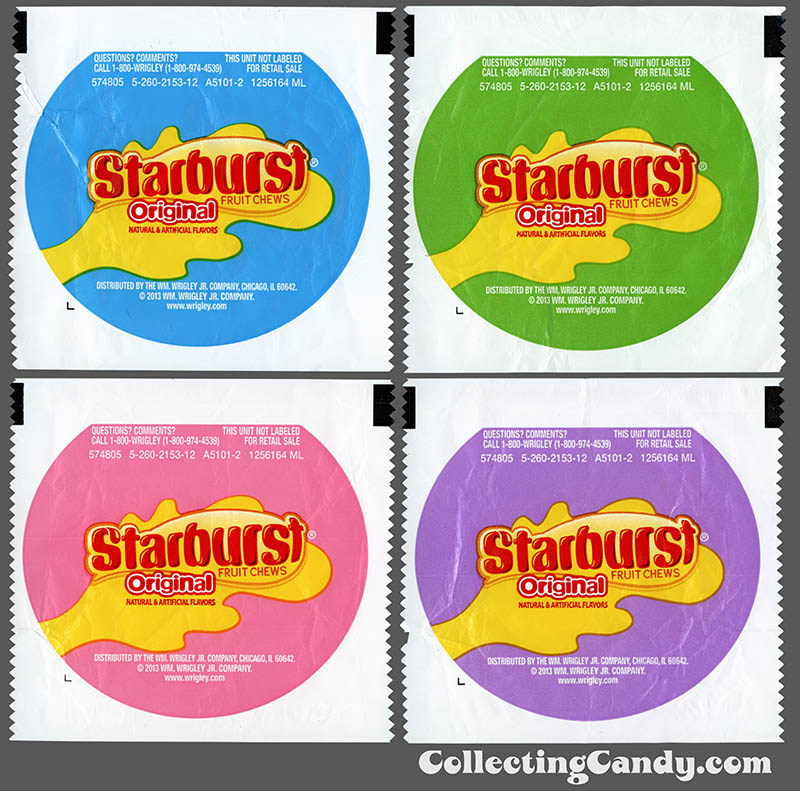 And that’s everything for our look at Starburst Jellybeans and their earlier-than-you-might-think origins.   See you next time!

A New York City based writer, editor and sometimes actor. After spending much of the 1990′s in the comic book business helping tell the stories of Marvel Comics’ X-Men as series editor, he has since split his time between developing his own entertainment properties while still consulting and working on others. Having been described as “the Indiana Jones of lost and forgotten candy”, Jason is one of the country’s premier candy collectors and historians with his discoveries appearing in countless blogs, magazines, newspaper articles, and books. Always happy to share his knowledge and unique perspectives on this colorful part of our popular culture, Jason has consulted with New York’s Museum of Food and Drink and has also been a featured guest on Food Network’s Heavyweights, France’s M6 Capital, and New York’s TheActionRoom.com. My Google Profile+
View all posts by Jason Liebig →
This entry was posted in 1990's, Boxed, Easter, Holiday, Mars, Sour Candy and tagged candy collecting, candy collection, candy collector, candy wrapper collection, candy wrapper collector, chewy, collectible, collecting candy, confectionery, confections, Easter, Easter candy, fruit flavored, holiday candy, jelly bean, jellybeans, packaging, packaging design, Starburst, sweets, vintage candy wrapper, wrapper. Bookmark the permalink.

4 Responses to Easter Week 2014: Starburst Jellybeans! (They’ve been around longer than you think!)